Real Steel Noisy Boy comes courtesy of ThreeA Toys. You can preorder one now from your favorite retailer.

Ashley Wood is an Australian artist most recognized for his Spawn comic book cover paintings, Hellspawn comic illustration work, Metal Gear Solid art, and Tank Girl work. More recently he has spent a great deal of time on his original properties Zombies vs. Robots (vs. Amazons), Popbot, World War Robot, and Adventure Kartel, working with ThreeZero toys of Hong Kong to form the toy-making partnership ThreeA, through which Ashley’s original designs come to life. ThreeA toys are most recognizable by their incredible detail and weathered paintwork.

Real Steel was the greatest science-fiction action movie of 2011 and a true masterwork of modern cinema.  Criticized by the unwashed masses as 'Rock' Em Sock' Em Robots the movie', Real Steel is actually based on the 1956 Rickard Matheson short story, Steel.  Steel was also the basis for a 1963 The Twighlight Zone episode of the same name.  In Real Steel, generally unpleasant but sometimes lovable people control remote control robots to kick the snot out of each other while an absentee father grows closer to his son and we all learn the true meaning of family.  That meaning, apparently, is that directing robots to beat the piss out of each other for sport is better with family. 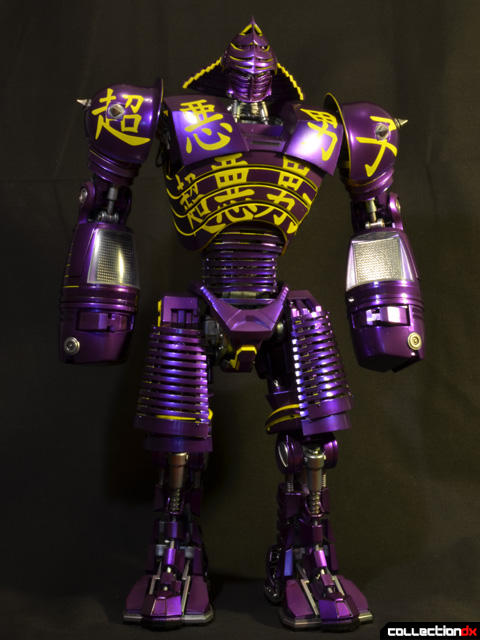 Noisy Boy is the fourth release in 3A’s Real Steel line.  Noisy Boy is Hugh Jackman’s second fighting robot in the film, purchased to replace Ambush after that robot’s unfortunate run in with a cow.  Noisy Boy, The Manga Mangler, is a veteran of World Robot Boxing (WRB) who was on an exile tour overseas when Hugh picks him up. Noisy is an advanced robot fighter featuring voice controls and high-tech styling.

ThreeA was nice enough to send us a Noisy Boy production sample far ahead of the actual ship date.  The direct version was available for preorder on Bambaland (ThreeA’s direct sales web store) a few months back and sold out, but is still available for preorder from regular retailers such as Big Bad Toy Store or Sideshow now, slated to ship in Q2 2014.  Before diving in to all the details below, be sure to watch my video review above showing off the articulation and light up features. 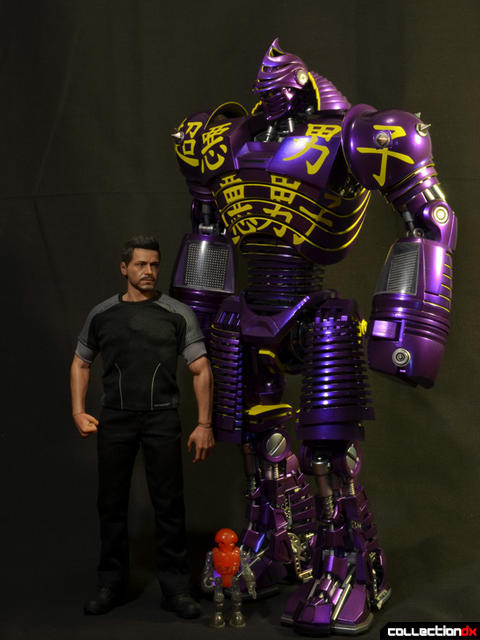 ThreeA’s 1/6 scale Noisy Boy is a monstrous toy production, standing over 18” tall. The toy is made from hard plastic with an inner skeleton, movable armor panels, ratcheting joints, lights, and a pearlescent high-gloss paint job.  Shown next to Wraith Pheyden from the Glyos line in front and a standard 1/6 scale fellow on the left, Noisy Boy is a massive and imposing figure. 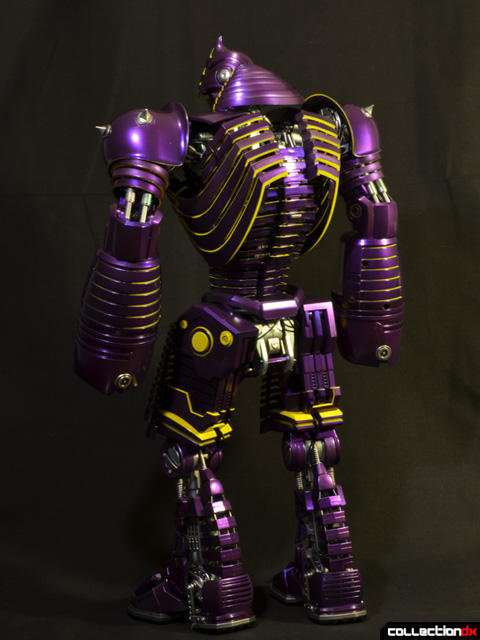 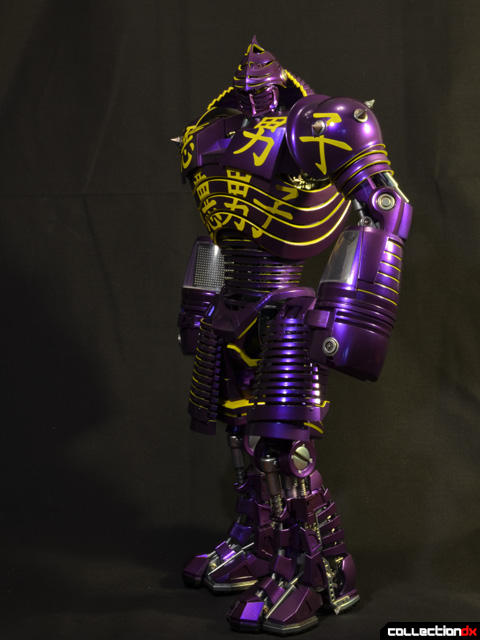 The paint work is complex and clean.  The inner details feature metalics with lots of shading and greasy details, but the exterior is where the magic is. The armor panels are painted with a pearlescent purple with a high gloss finish that’s more automotive than robot toy.  The finish is spectacular and nearly flawless.  The most defects I could find were a single dust spect on one shoulder and a scuff on the chest that might be my fault.  The yellow trim and symbols are sharp and opaque, with no overspray or uneven finish. 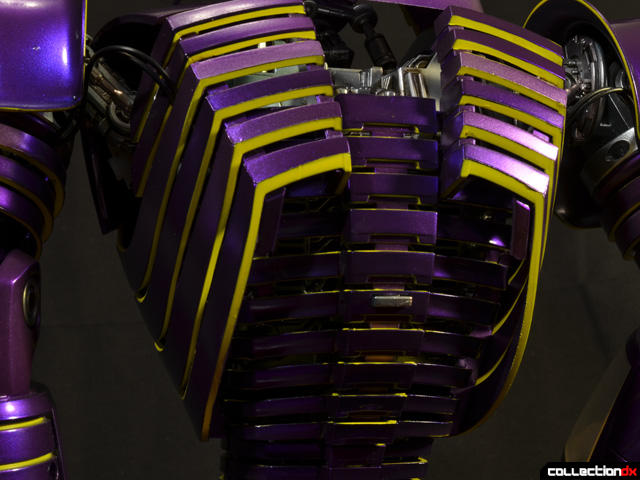 Things get really good when we look at the back.  The center segment of the back armor comes off, revealing a compartment for three AAA batteries.  The compartment is well built, and using normal batteries is such an improvement after having to track down obnoxious sizes of hearing aid batteries for previous 3A toys.  In addition, the button on the back is nice and big with a satisfying springy click, as opposed to the microswitches used on previous 3A toys that often required tweezers to activate. 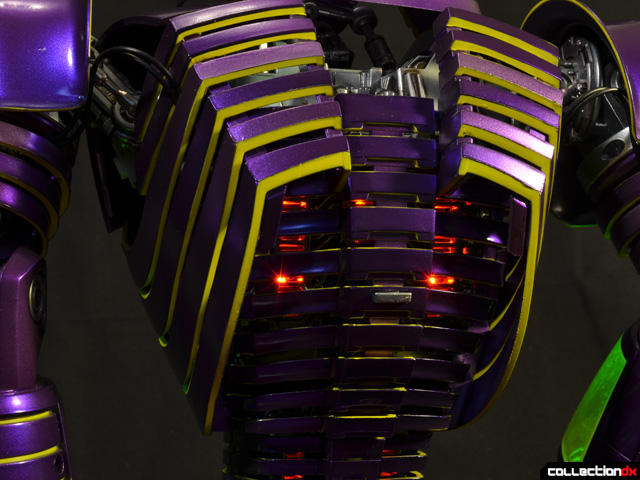 Lights on!  The automotive comparison does not extend just to Noisy’s paint job.  Noisy Boy is as much robot fighter as he is Japanese drift car, with a full undercarriage light package.  There are red LEDs along the inner skeleton of the torso and limbs that glow between the segments of the armor. 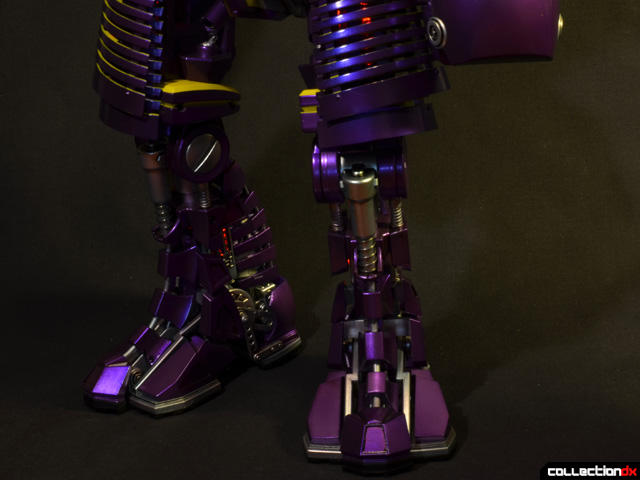 There are lights up and down the limbs, giving the whole toy an unearthly glow. 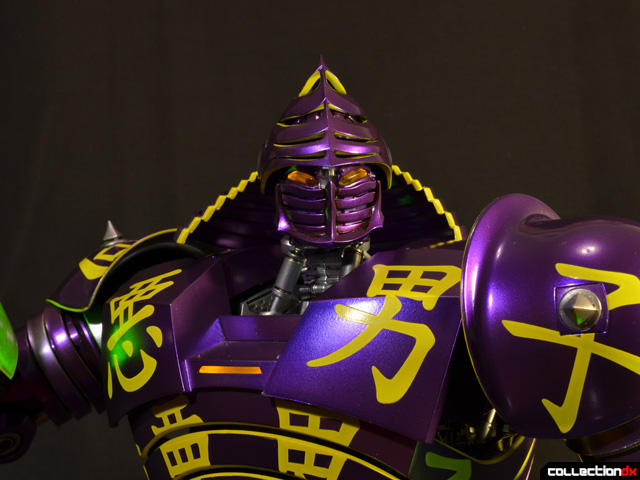 In addition to the red inner lights, Noisy Boy features an orange light in his chest and orange light up eyes.  We haven’t even gotten to the LED displays in the arms yet.  There is a lot going on here and it’s all great. 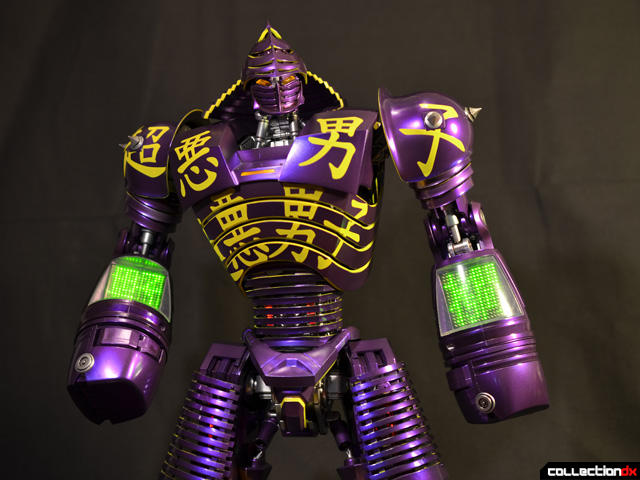 Each of Noisy Boy’s forearms has a 16x16 LED display panel.  These displays cycle through a number of kanji symbols.  According to the Real Steel wikia site the symbols shown are the kanji for “pain”, “man”, “oblivion”, and “the end”.  The symbols look great, but get a bit muddled in the photos because they were cycling faster than the exposure of the shots. 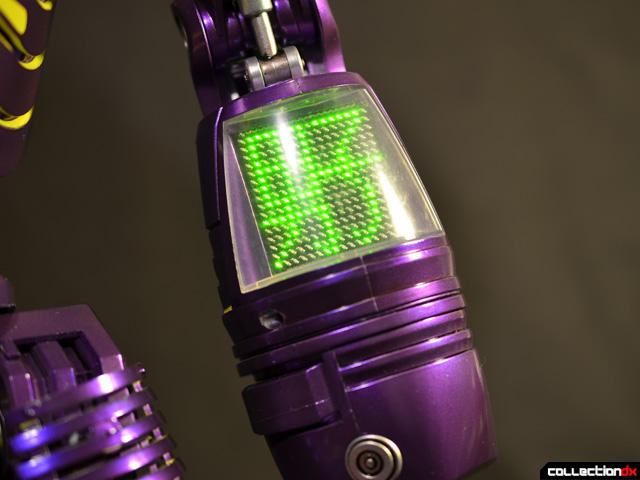 One thing worth mentioning is that the displays in the movie are an amber color, but on the toy they are a yellow green.  It might not be a huge deal since they still look great, but the color is not accurate and I’m sure will bother some people. 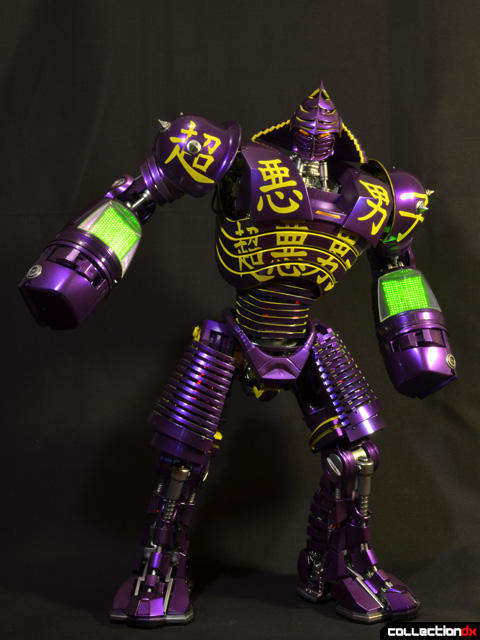 LED color aside, all the details are accurate and beautiful, but that’s only half of the equation.  ThreeA’s other Real Steel figures have been pretty but have not all handled as well as I would have liked.  Ambush had very tight friction joints that kept the toy solid but limited articulation a bit and put strain on the armor panels when reposing the figure.  Atom features much more complex construction and some ratcheted joints, but the joints were not all tight enough.  These days, my Atom can only stand in a few neutral poses without assistance.  Thankfully, Noisy Boy is much improved over those earlier efforts.  As can be seen in my video review at the top of the page, Noisy’s joints are just about all tightly ratcheted and make the toy rock solid. 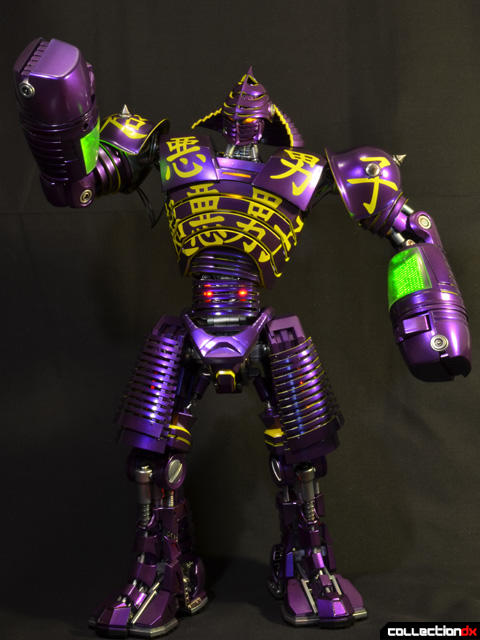 Atom has slightly more articulation in a few spots, but Noisy Boy is a better toy experience, one of the best quality figures that 3A has produced. 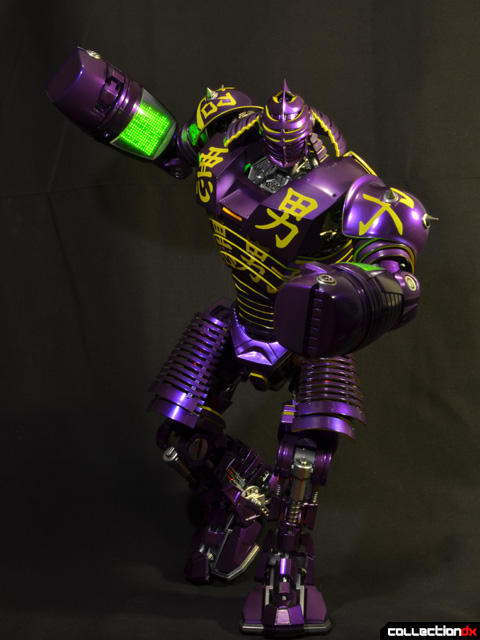 As long as one foot is on the ground and the toy is balanced, it will hold a pose forever.  In the film Noisy is a dynamic fighter using big moves to get those massive fists where they need to be, and the toy can replicate that perfectly. 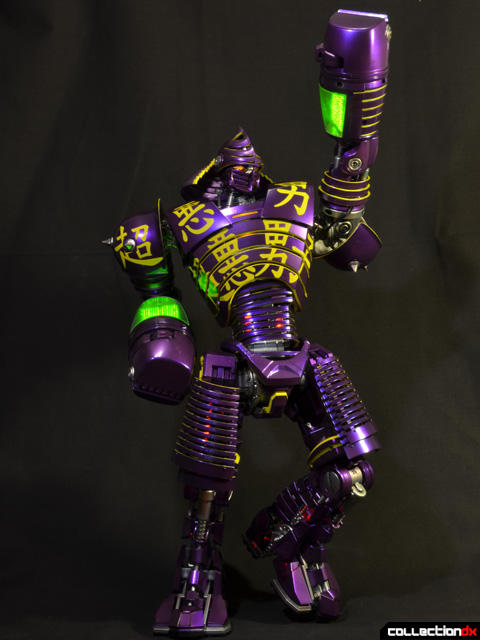 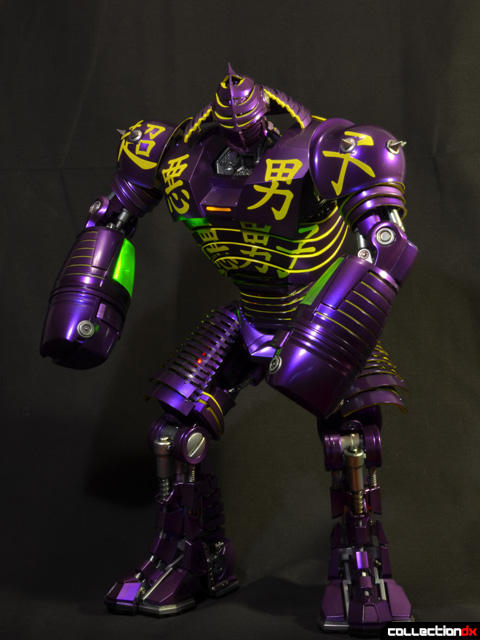 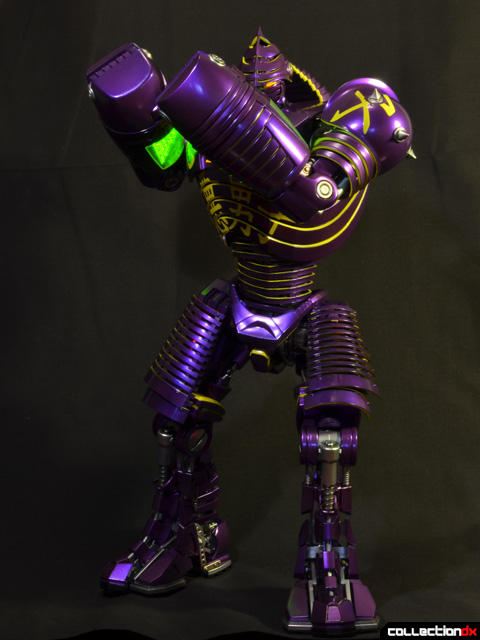 Noisy can even do a decent defensive boxing stance. 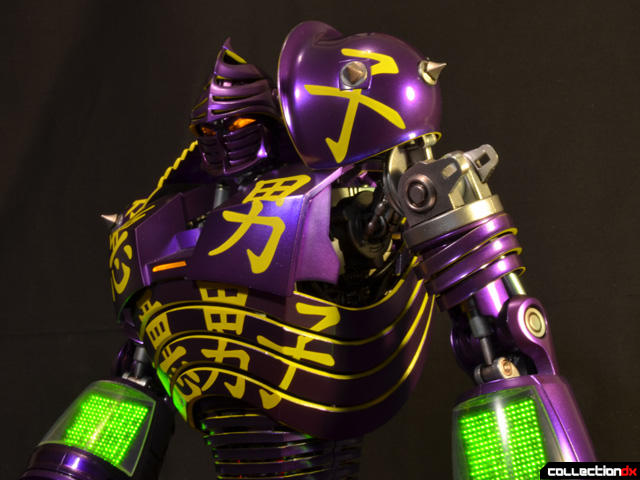 A great deal of the dynamism comes from the excellent shoulders under that big spikey armor.  The armor is on a swing bar attached to the shoulder that allows it to move with the joint while staying far out of the way.  The shoulder itself clicks in both directions and features a wing joint where it attaches to the torso for some extra expression. 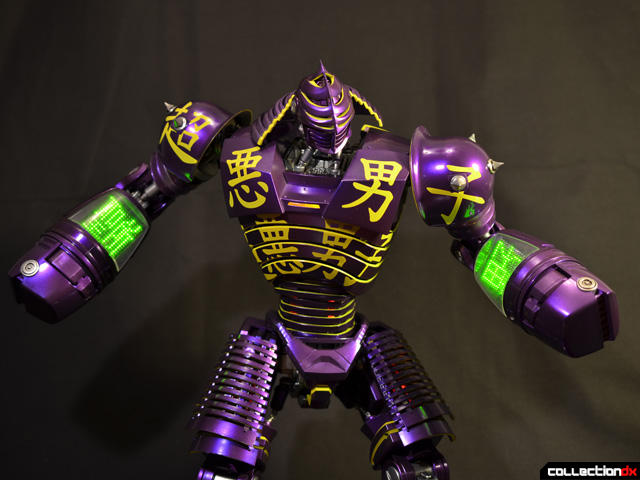 I’ve been trying to stay objective since ThreeA sent this toy along so far ahead of its actual ship date, but I really, really love this figure. Noisy Boy was the most impressive and complex bot in Real Steel, and I never would have expected that someone would pull off a toy incarnation as well as 3A has.  For a film that performed decently but was pretty heavily criticized by mecha purists, ThreeA has given the franchise far more effort and love than most people would argue it deserved.  I thought Real Steel was pretty great, so I am thrilled to be able to display such an impressive representation of such a cool design. 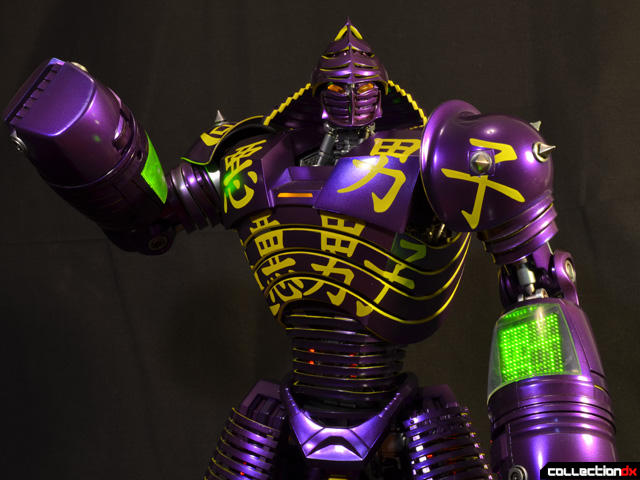 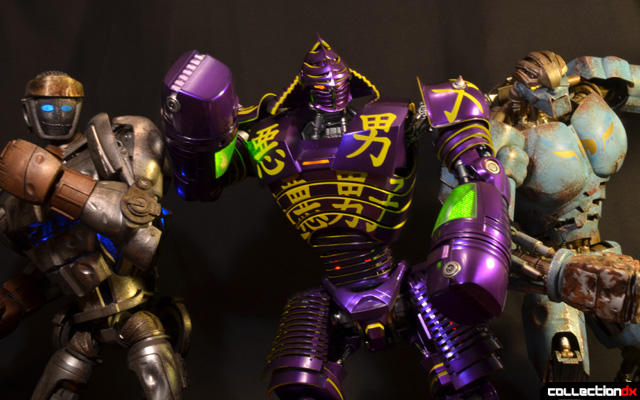 Among ThreeA’s Real Steel line, Ambush still has the most impressive and realistic weathered paint job, but Noisy Boy is pretty in a whole different way, and a much better toy.  For a retail price of $389.99 I would expect nothing less.  Almost $400 is a lot of money for any toy, but the quality and finish of Noisy Boy makes a strong case for that price tag.  Fans of the film or just fans of the robot design won’t be disappointed, but fans of just plain cool robot toys of all types should take a look as well.  There’s something incredibly satisfying about a big dumb robot toy that’s well made features such a cool light up feature. 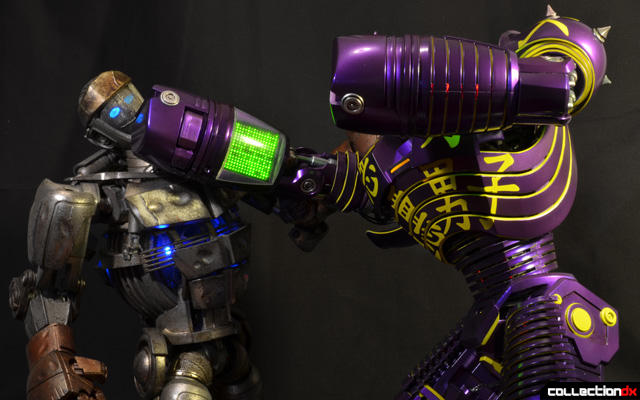 As a footnote, no review of Noisy Boy would be complete without some glamour shots alongside the bot that finally did him in, the Mighty Midas.  Midas was actually the second release in the line.  I was a not a huge fan of the design so I never picked one up, but once I received Noisy and saw a great holiday sale price on Midas, I figured I had better complete the line.  I guess I’ll have to go back and review Midas as well, now.  Until then, enjoy some fight pics! 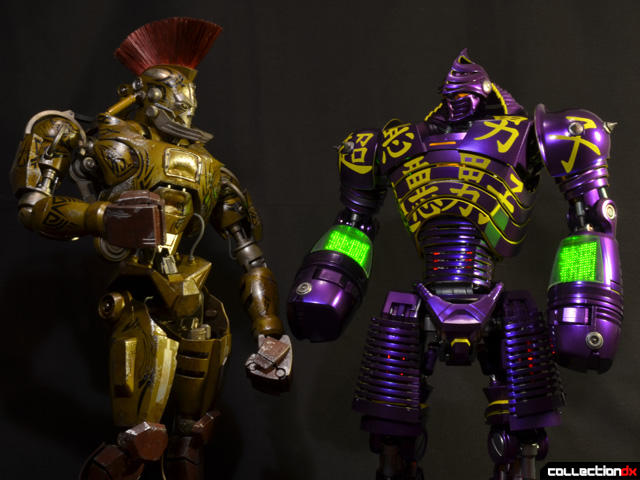 "In the left corner, the Gold-Blooded Killer.  This pimped out punk is programmed for pain.  The Mighty Midaaaass, against a bot who ran with the big boys in the WRB.  He's been on an exile tour oversas, but now he's back home and ready to make some noise.  Take your first look in a along time at Noisy Booooooyyeee!" 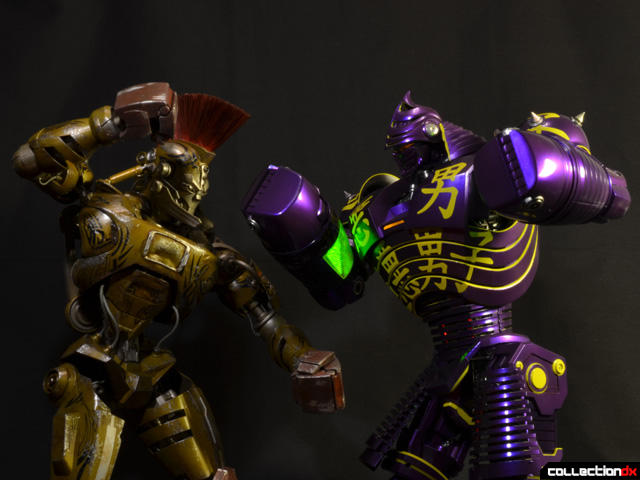 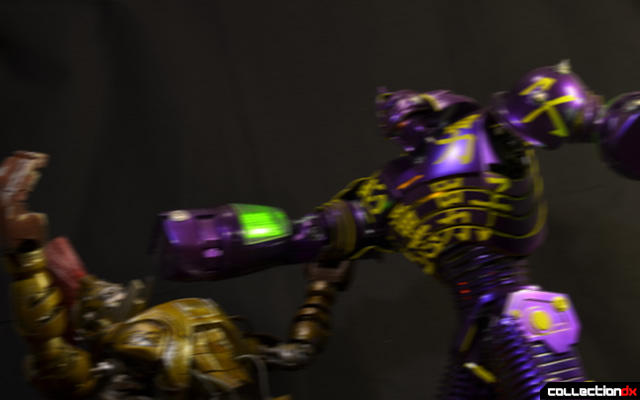 "Scimitar right!"  If nothing else, Real Steel got the impact of the fights right.  That first hit that Noisy Boy lands on Midas is so good.  The hit takes Midas's feet out from under him, and the special effects team deserves some credit for making the audience feel the hits so well. 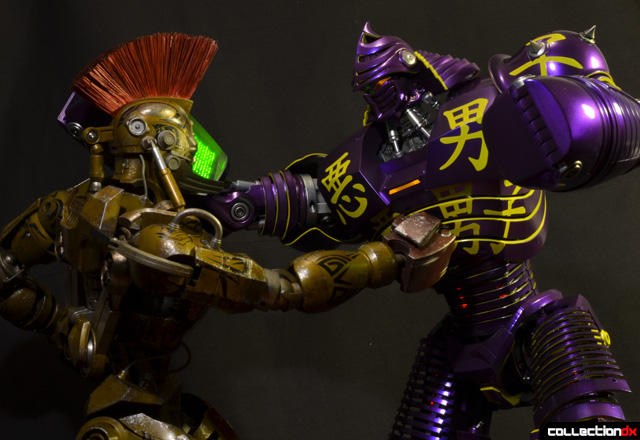 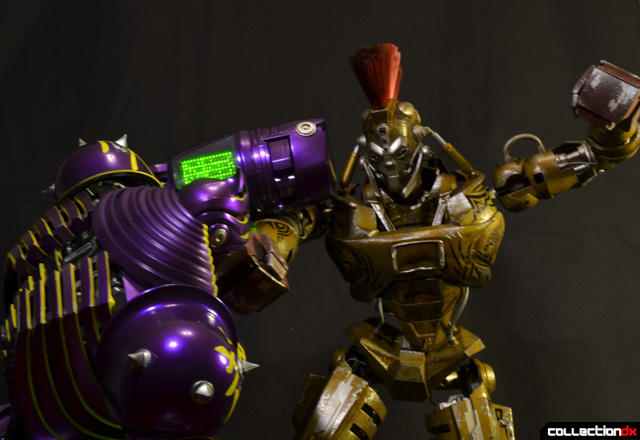 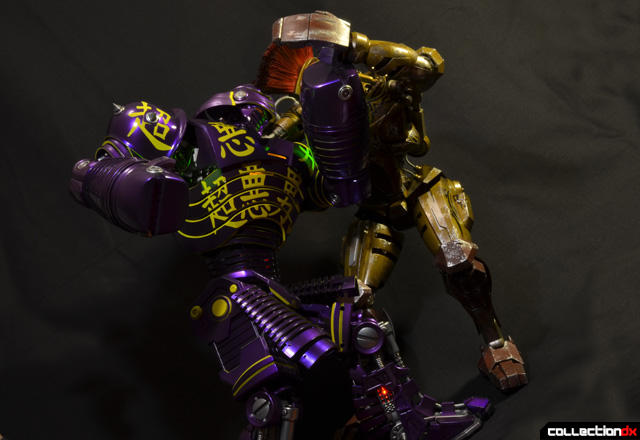 Things are going to end a little differently this time. 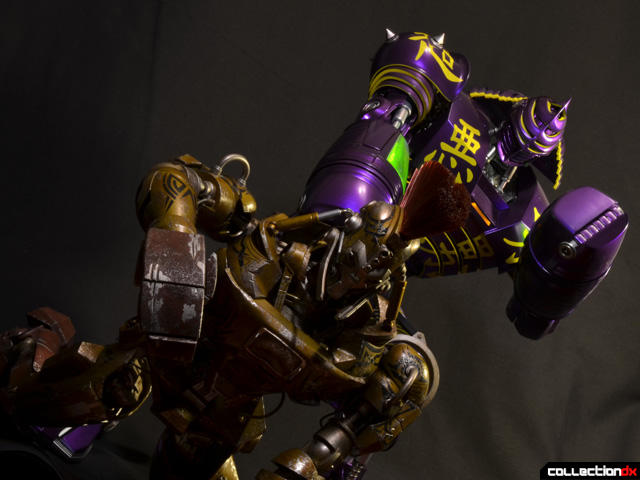 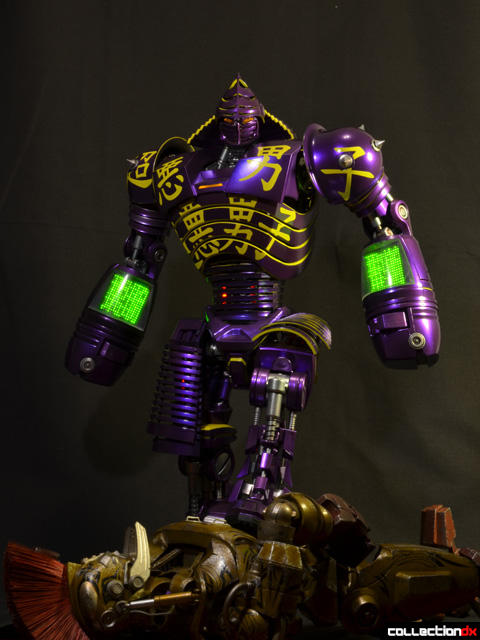 So, yeah.  ThreeA's Real Steel Noisy Boy is great.  Certainly for dedicated fans, but I am glad that ThreeA is in a position to make such niche products without compromise.

It's tragic that they did not get the Pacific Rim license. It was the obvious proven choice. Still two palms up.

I appreciate any review that celebrates the career of Huge Actsman.

That is an amazing piece. And it really was the most heartwarming story about robots punching the hell out of each other!