In the annals of unloved eighties properties, Bravestarr is unique in its demented lameness. Have you ever yearned for a story which wedded futuristic science fiction with the Wild West? Me neither. Bravestarr follows the exploits of its titular hero, a Native American Space Marshal (I feel I should capitalize that whole title). Space Marshal Bravestarr derives super powers from his spirit animals. His horse transforms into a giant horse-man to fight alongside him. Bravestarr’s milieu, a colony called New Texas, is populated by robots, aliens, and prairie dog people. I am not making any of this up.

Bravestarr’s nemesis is Tex Hex, a pink zombie outlaw-type who originally appeared in the loathsome Filmation Ghostbusters cartoon. Are you confused yet? Yeah, it makes no damned sense. And I love it. While the show and its toys were quickly consigned to the dustbin of history, the internet provides the archeological evidence that actual professional adults in previous decades created bizarre and ridiculous things for children, possibly while under the influence of pharmaceutical grade peyote. So the toys were here and gone in weeks. But were they any good?

Tex Hex is a pleasant surprise. After picking up the Skull Walker, I realized I needed its companion for the proper play value. So I grudgingly procured a hatless figure. I expected an off-brand He-Man-style action figure, but TH is much more than that. First, he’s huge at eight inches tall. 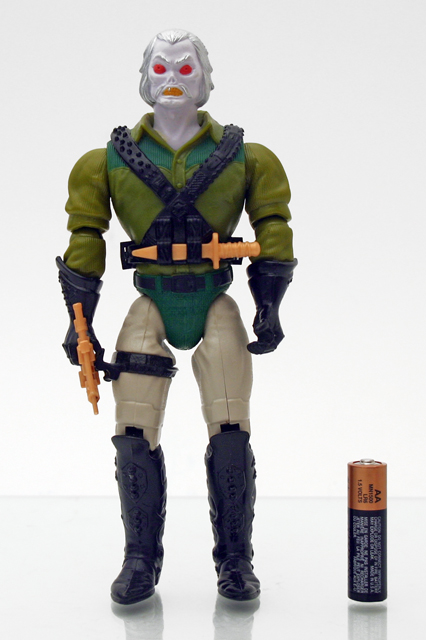 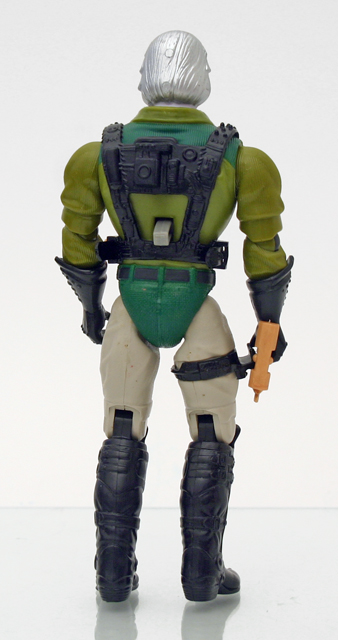 Second, the fit and finish are superb, especially by late-eighties mass-market standards. The paint apps are flawless and crisp. The molded detail is insane. You can actually see the warp and weft of the fabric on his cheesy cowboy shirt! 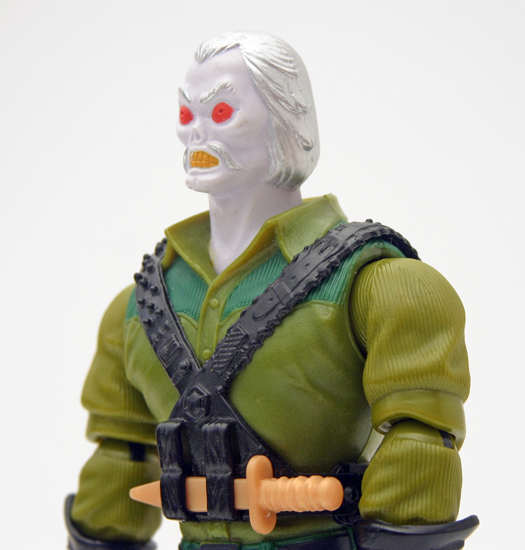 Hex is reasonably well articulated, and solid. You can throw him against the wall and do no damage. The action feature is pretty weak (you press a button on his back and his arm raises to ninety degrees, your typical gunslinger motion) but this is an impressive figure, built with sturdy ABS and hard rubber. 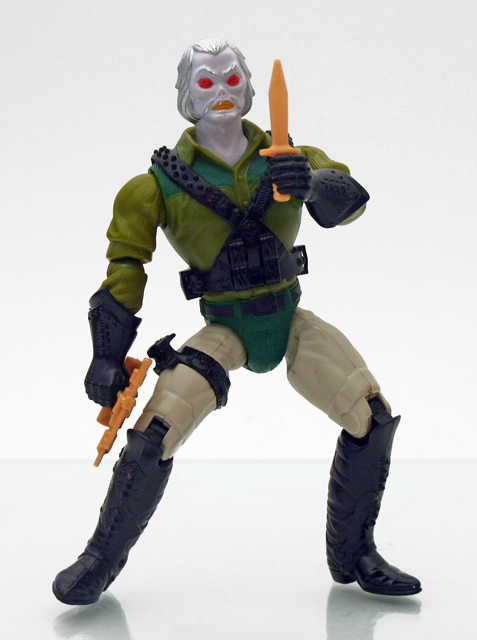 But the real draw for me was the Skull Walker. A Mech walker with a cow skull for a head? A cow skull head with disco ball eyes? Yes, Please.

The walker is packaged in a handsome, painted box. 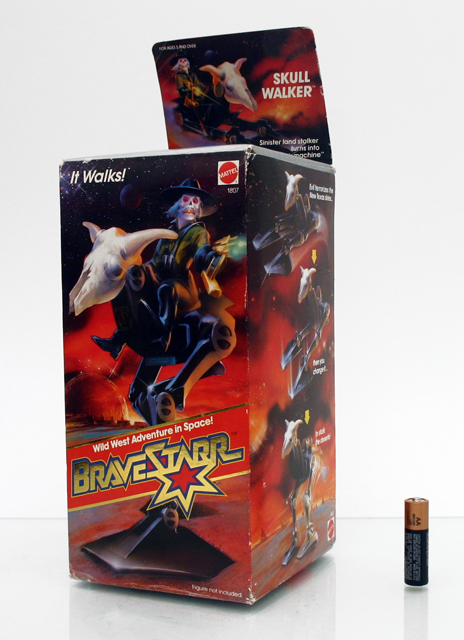 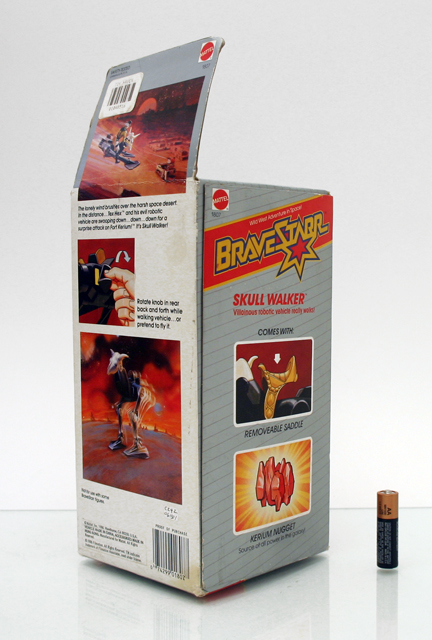 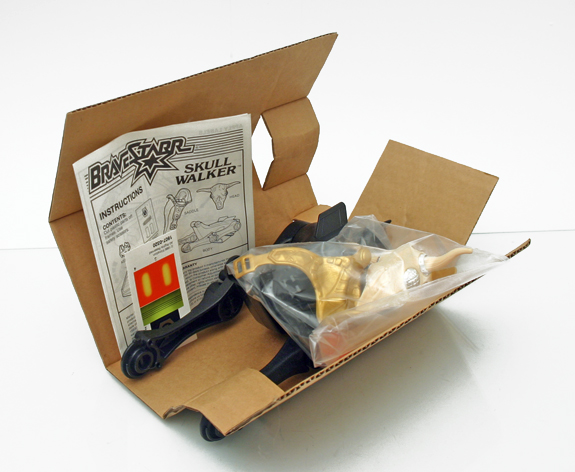 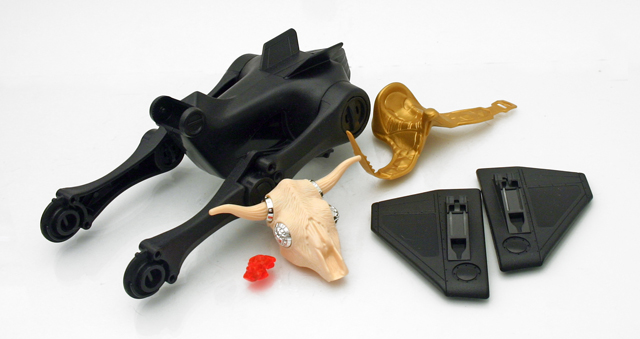 I knew what I was in for. But still, my first thought was: what the hell is this thing? I’m still not sure. 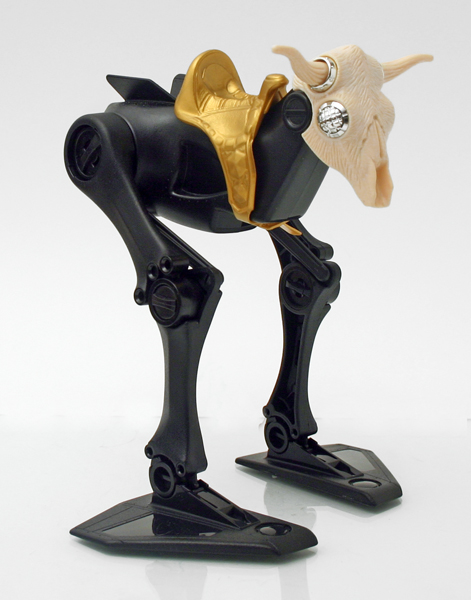 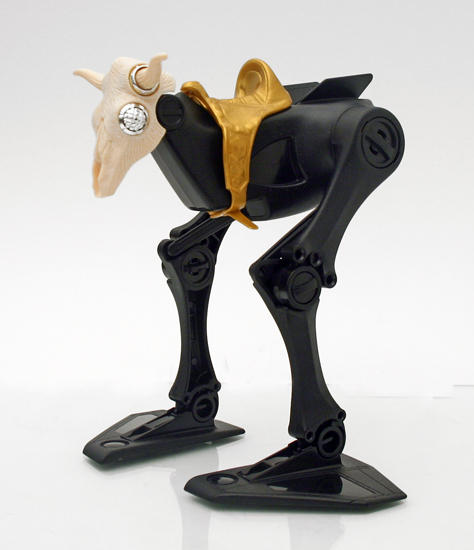 It’s all very substantial and well detailed. Look at that cow skull! 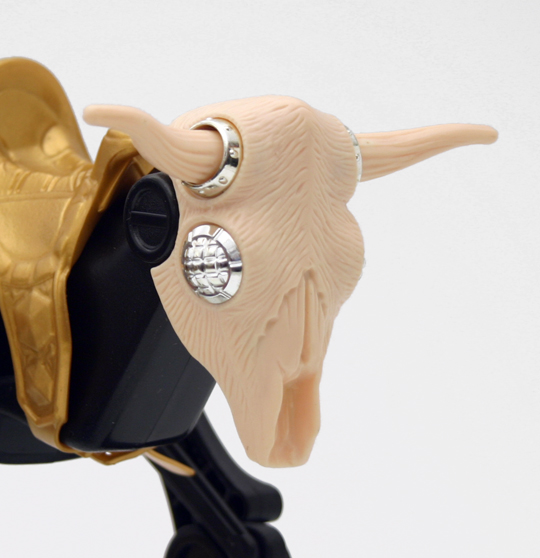 You twist the knob at the walker’s rear end to make its legs shuffle back and forth. 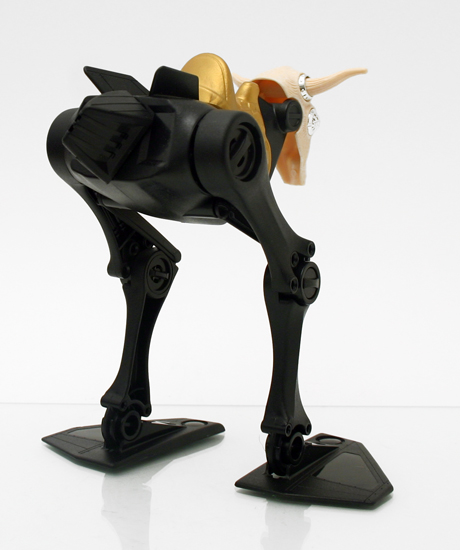 I’m a little disappointed by the addition of Tex Hex. 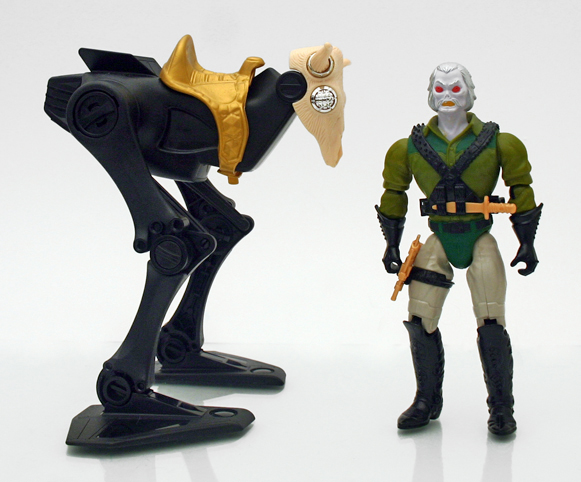 He completes the playset, but he doesn’t sit on or interact with the walker very well. 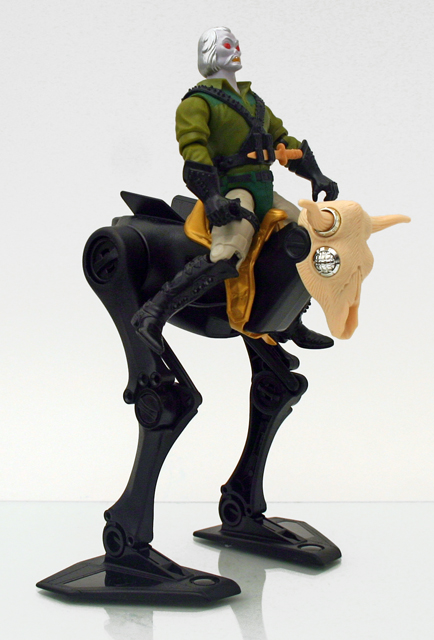 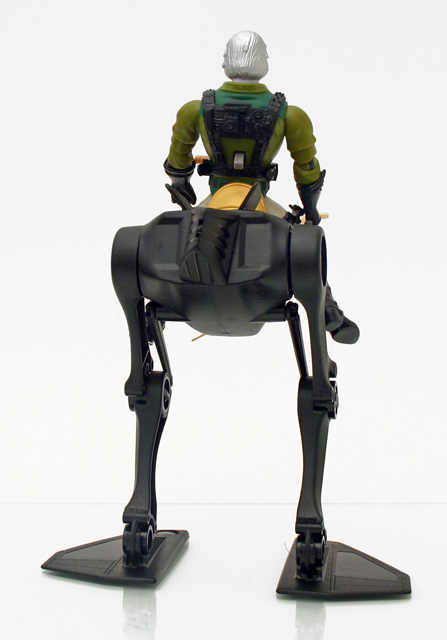 But I can’t deny that the combination is fun in a visceral way. The urge to walk and fly this thing around is strong. Did I say “fly?” Yup, there’s a flying mode too. When you fold the walker’s legs forward, it assumes a land-speeder-type configuration. It’s pretty cool. 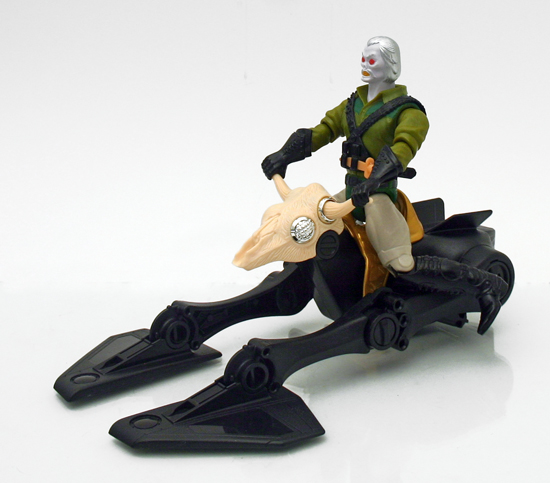 I picked these up mostly because I love strange and obscure toys. But they’ve really grown on me as fine toys in their own right. As loopy as the premise was, I bet the few kids who owned these toys had an awful lot of fun with them. I know I have. 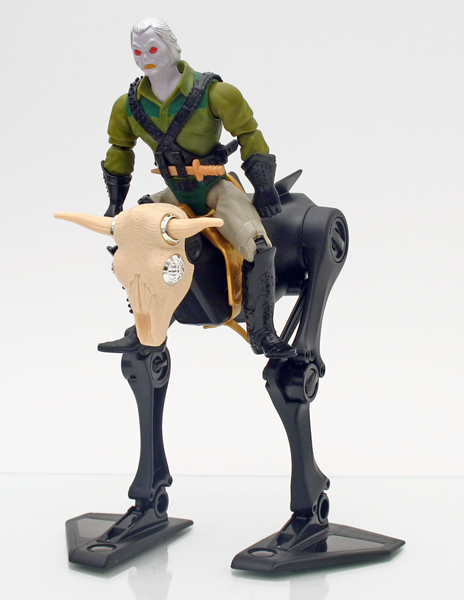 Bravestarr was a great line and had amazing figures. I had Beavestarr and the quality and detail surpasses a lot of todays figures. In fact a lot of the old toy lines from the 80's like Centurions and Sectaurs and Dino Riders etc, ones that had the larger figures in them beat some if not most of the stuff released today in terms of sculpt and paint details.

I wonder if there are people in Japan who obsess over third-rate, largely ignored American cartoons, the way we do over theirs. Imagine going into someone's house in Japan and seeing a glass display of Bravestarr, Barn Yard Commandos, Blackstar, Trollz, Bucky O'Hare, Exosquad, etc.

No, because even their horrible shows like Xabungle and Dorvack are miles above the drek we produced at the time.

Tho most obscure Western media I see Japanese people into are old music and movies.

And Exosquad was actually a damn good show, and about as close to a proper Japanese robot show the West ever produced. Adult stories with themes like death, racism, war and corporate monarchy made it a cut above the rest.

Bravestarr had a few social comments in episodes as well. A kid died from a drug overdose in a "very special" episode, where Bravestarr couldn't save him, even with his goofy space shaman powers.

It's no Thirty/Thirty, a talking robot horse that can walk upright and packs a shotgun.

Bravestarr was almost as crazy as Power Lords, almost.

My apologies to all whose comments were lost. There were somehow two copies of the review, one published and one not, and this caused some difficulties.

The lost comments basically reminded me that there have been a ton of Space Wild West cartoons and sci-fi (Bismarck, Firefly, Trigun). I am fond of the movie Westworld myself, as well as its sequel, Futureworld.

I mentioned that my baby bro' was four when Bravestarr was on, and he collected a bunch of the toys. I didn't own any, but I had fun playing together with his. They were well-made, and there was a good variety to the line. You could collect a mix of good and bad guys without running into 18 variations of the hero. Plus, they often came with a nifty gimmick (like transforming, or a mini vehicle, or those nifty laser backpacks).

This toy blows my mind. It's a good thing the box art is so mediocre, because a semi-realistic depiction of this thing, like one of the Micronauts alien paintings, would probably kill me as soon as I looked at it.