Starting in around 2008 or so Tomy of Japan began to import their Tomica line to the US as a Toys R Us exclusive line. The line was a total mess. It consisted of basic Tomica Cars, Tomica city buildings, Plarail Hyper Guardian trains, and Hyper City Rescue vehicles. Some were direct Japanese imports, some were mish-mash sets with recolored parts stolen from various other sets. The line was doomed to fail in the US. Focusing on the train aspect was a bad choice as we don't really have a train culture here. How did the cars fit in? Did the buildings work with the trains? No idea.  It's really too bad as the Tomica line is one of the biggest and longest running lines in Japan.

Tomy's Plarail system started about 50 years ago, and is easily identifiable by the trademark blue tracks. Mostly these trains were based on real trains, but in recent years they have branched out to do futuristic and licensed ones. They have also created cross-platform play with their Tomica cars line, and the Hyper series, including Drive Head and Earth Grannar. It's an amazing line that we here in the west know almost nothing about.

Most of the trains in the US Tomica line were cribbed from the Plarail Hyper Guardian series. In Japan, there were all sorts of themed trains - Police Liner, Cargo Liner, Rescue Liner etc, all with their own color scheme, making it like a sentai series for trains.

Fire Liner is the US release of the HGS-03 Plarail Hyper Guardian Fire-Liner. It's one of the few trains to arrive in the US in its original Japanese form. It consists of three cars, the middle one being the battery powered engine car. I don't know if this set came with track or not (some didn't). I think there were sets that did and sets that didn't. My instructions don't show any track, but i've placed some track down here just for show. 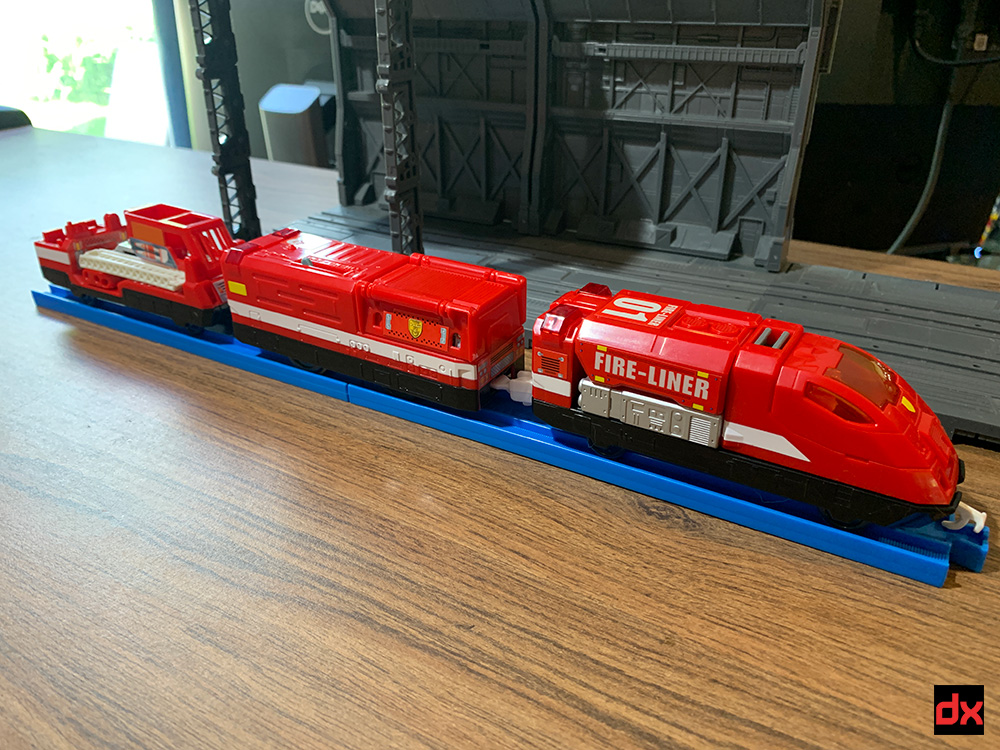 Each train links up with a common connector system. 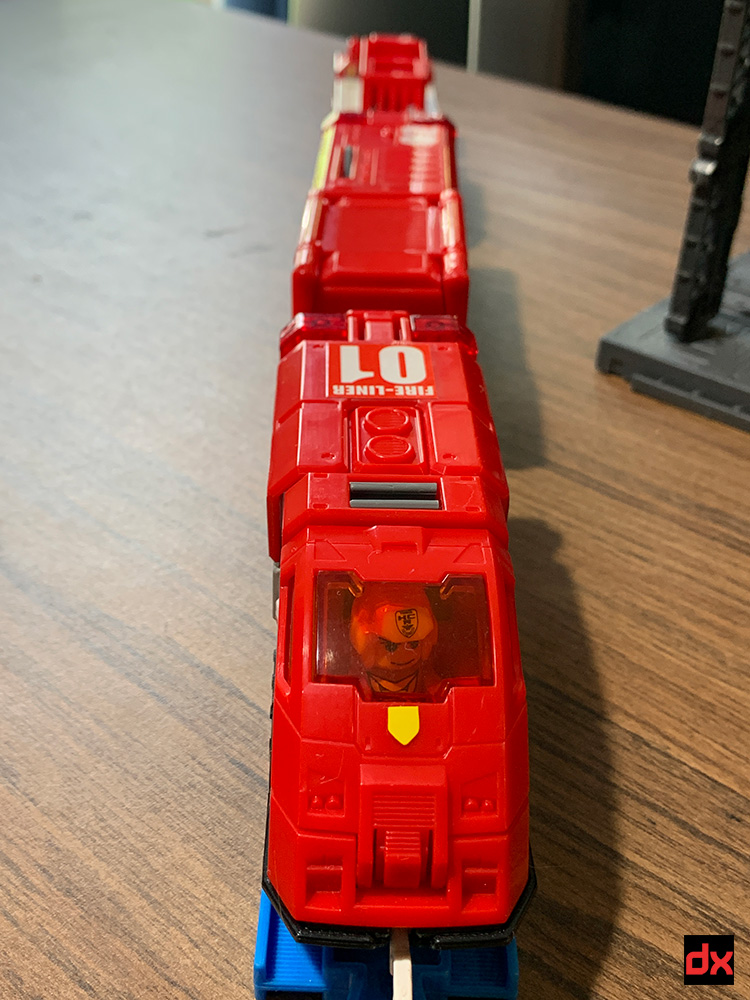 The cab of the Fire Liner opens up to sit one of the Plakid figures that is included with the set. When you lift the panel in the back, you can lift up and rotate the cab to show an entirely different front to the vehicle. 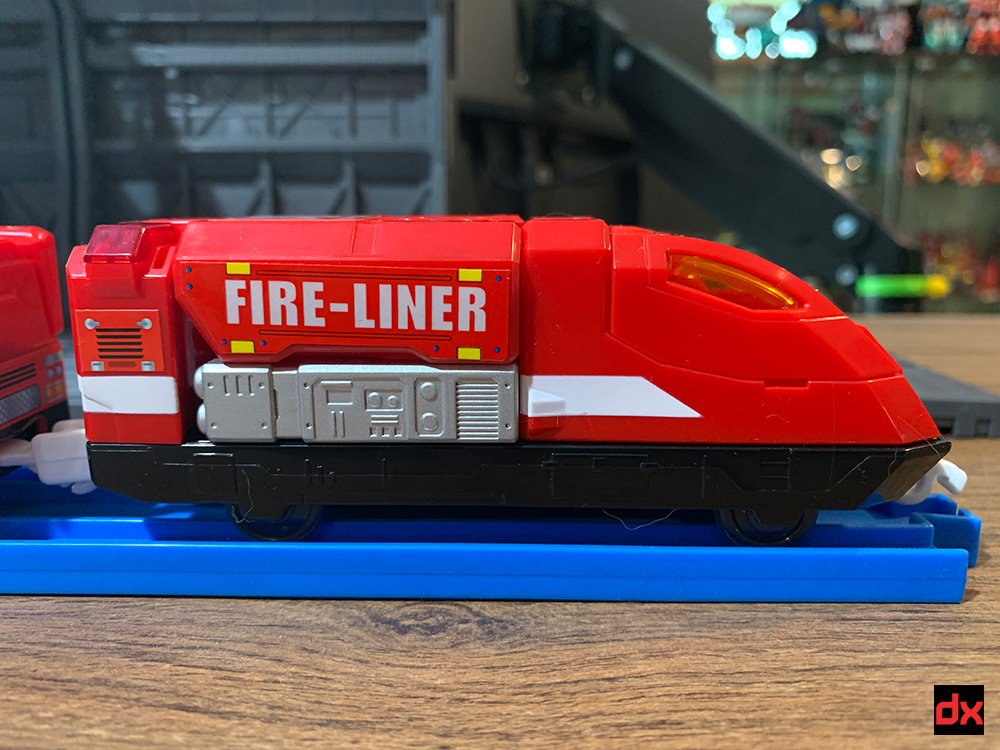 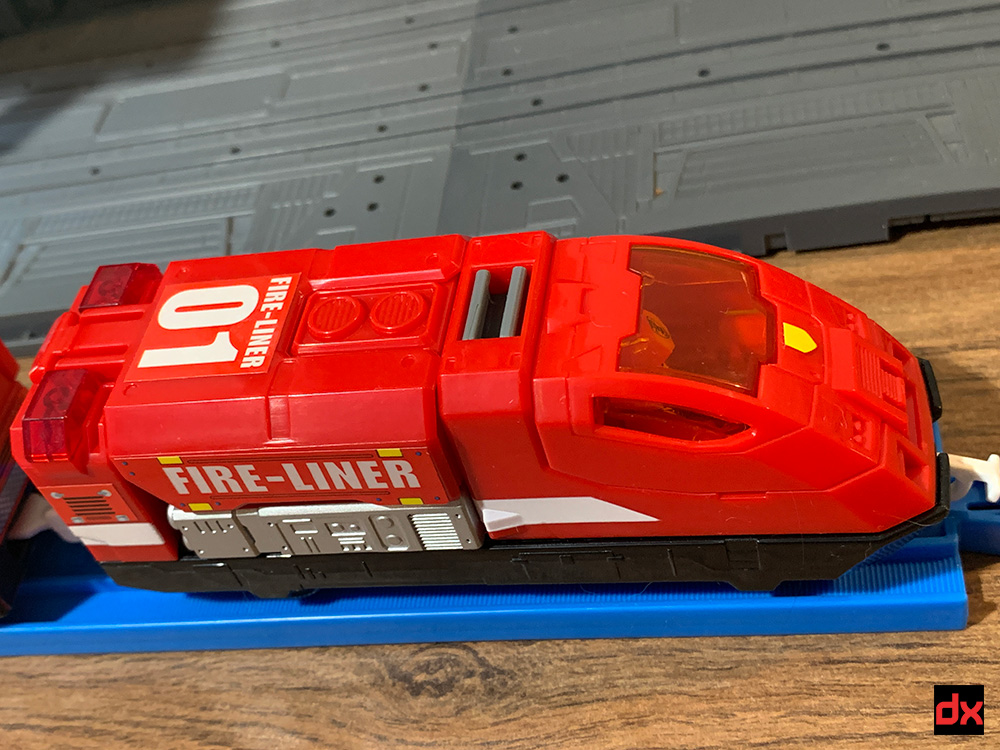 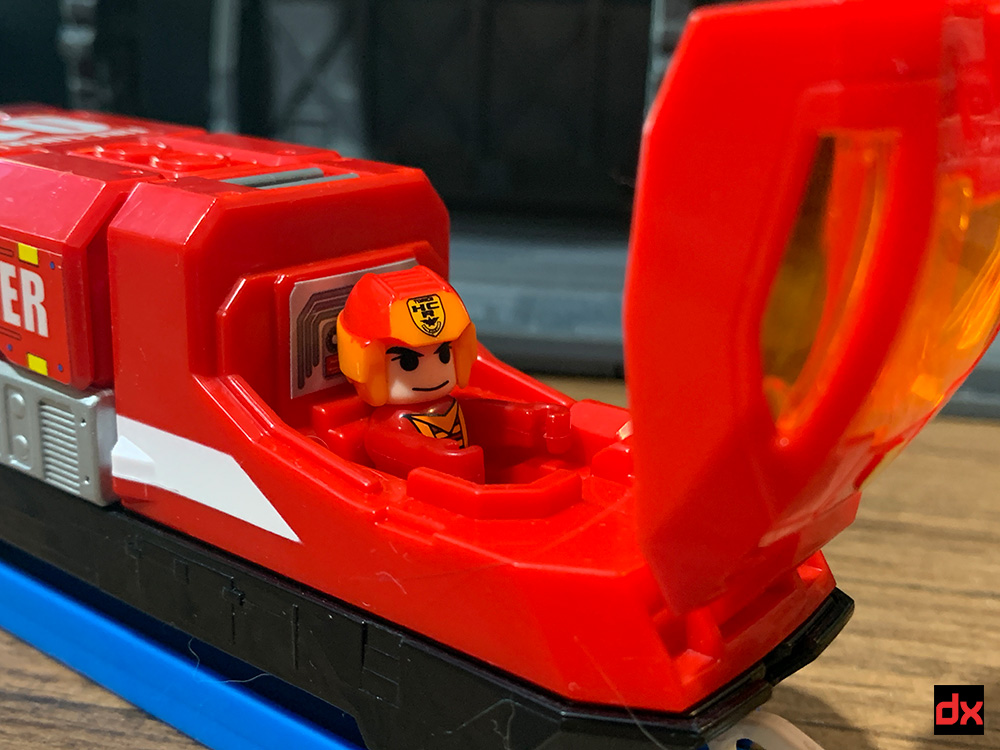 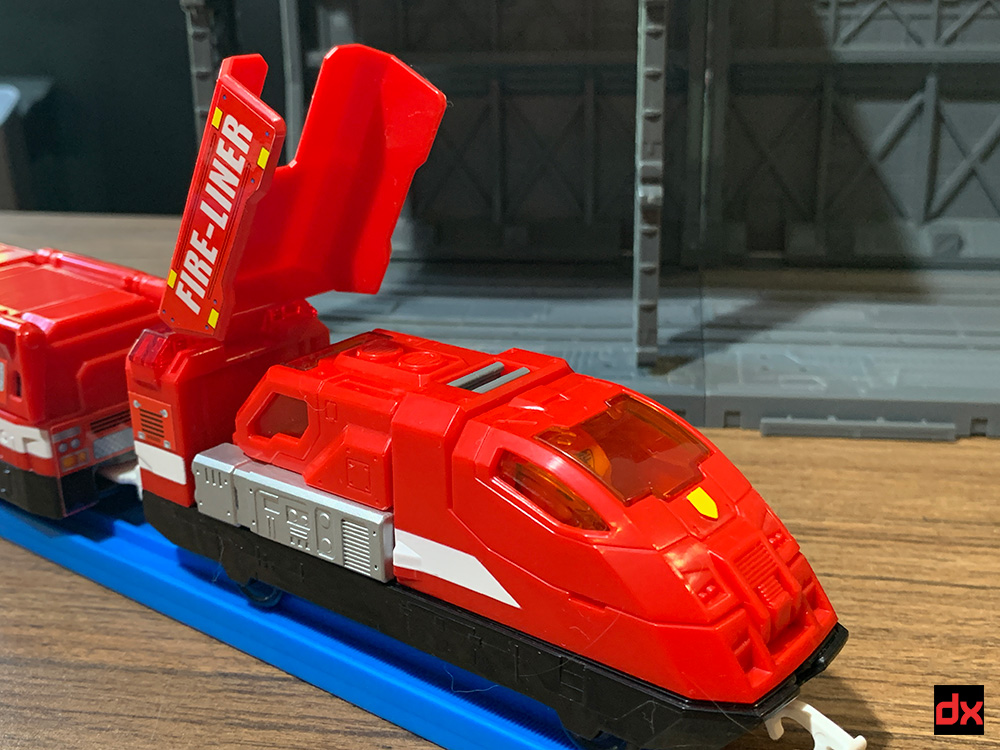 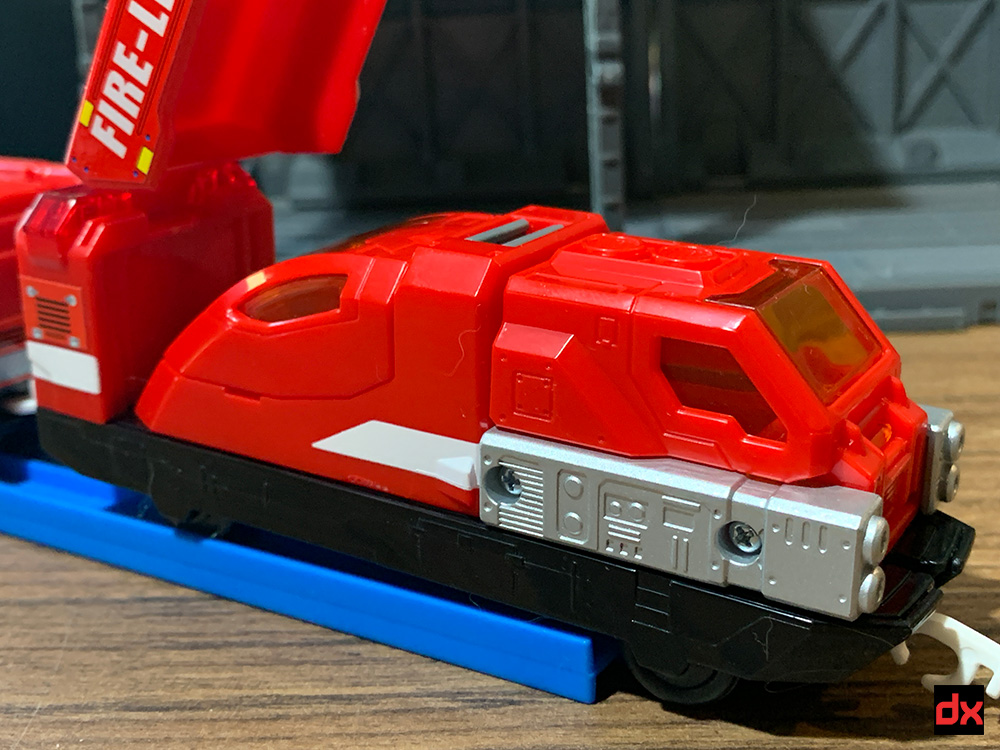 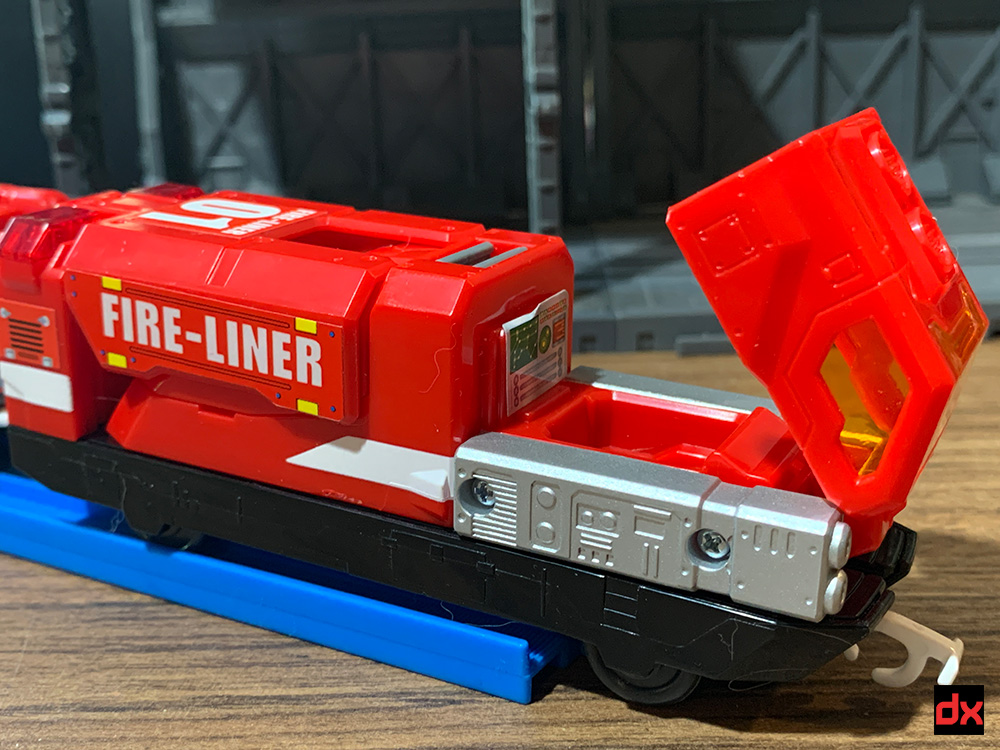 The middle car is the engine. It requires 1 "C" size battery. The lever switches the train on and off. Side panels open up to reveal detail, but that's about it for this one. 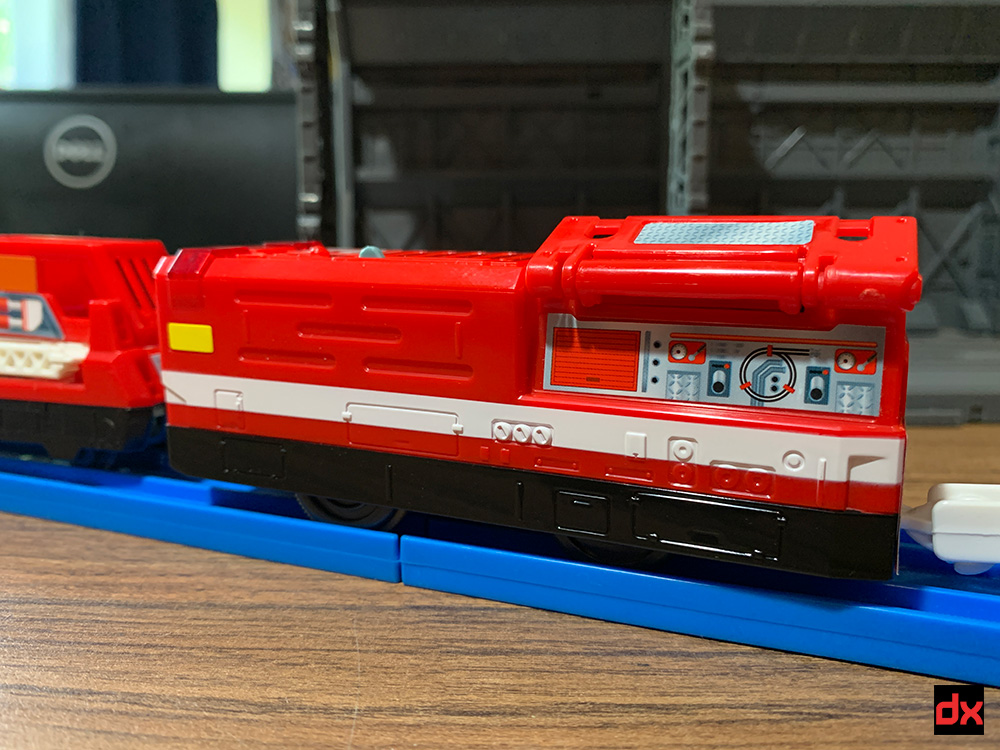 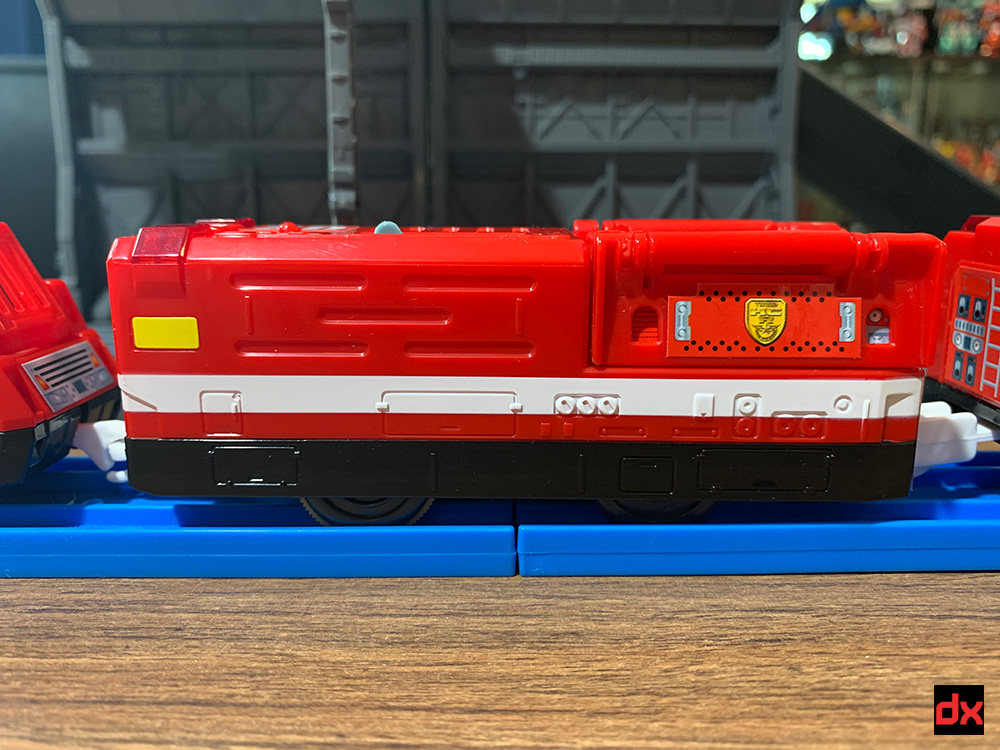 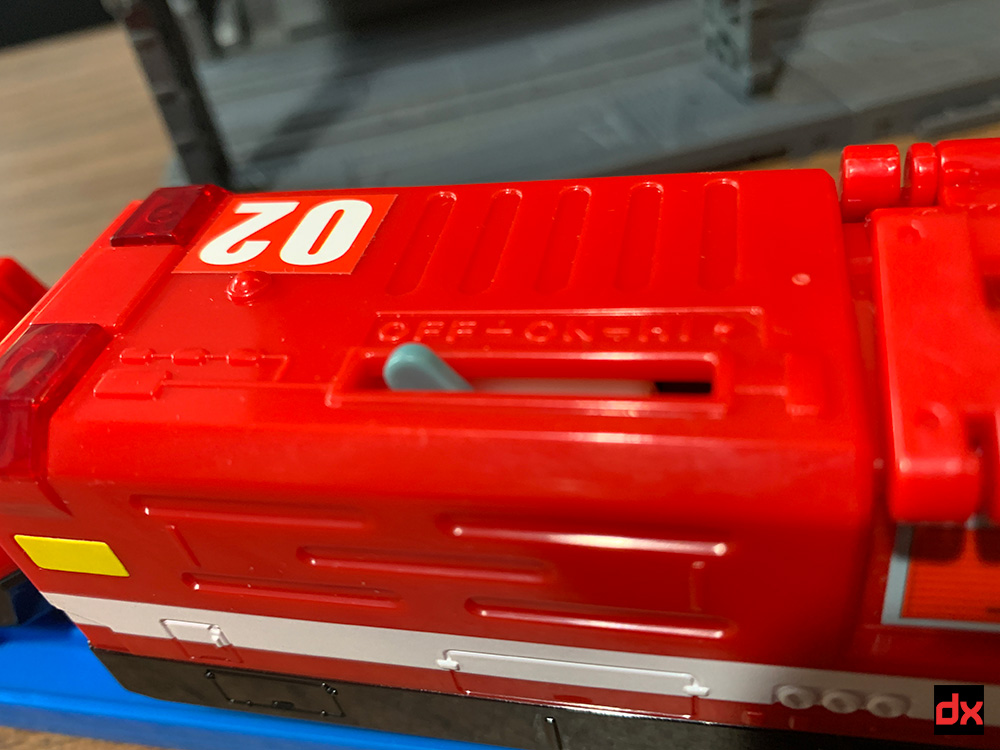 The third car has a lot going on. There are two extendable ladders and a multi-jointed elevating cockpit. 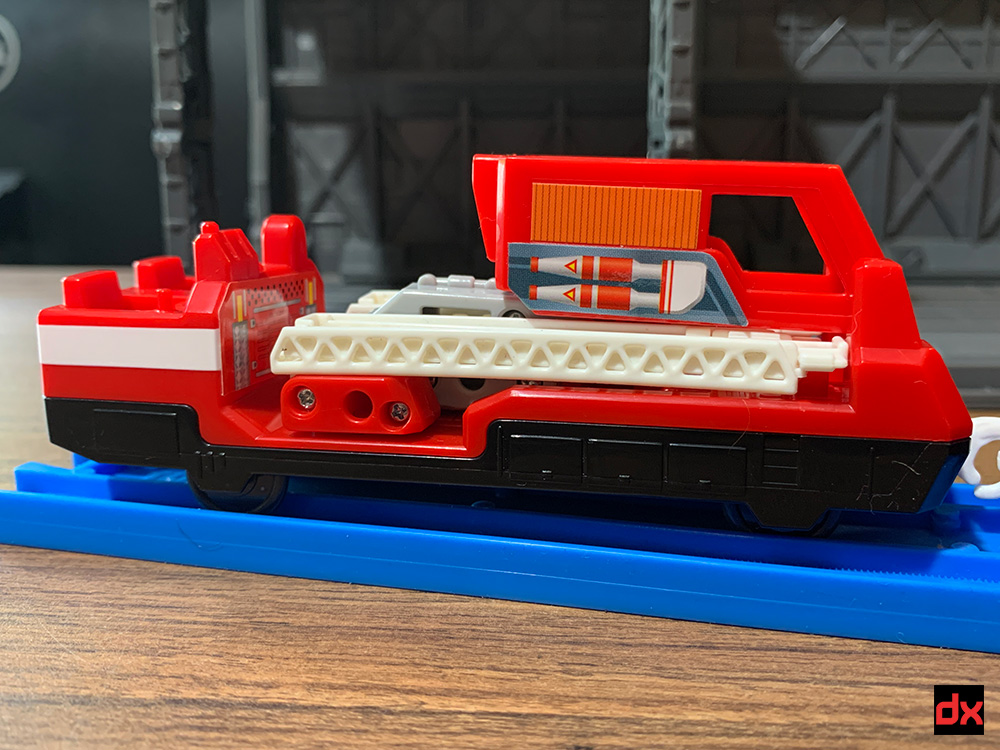 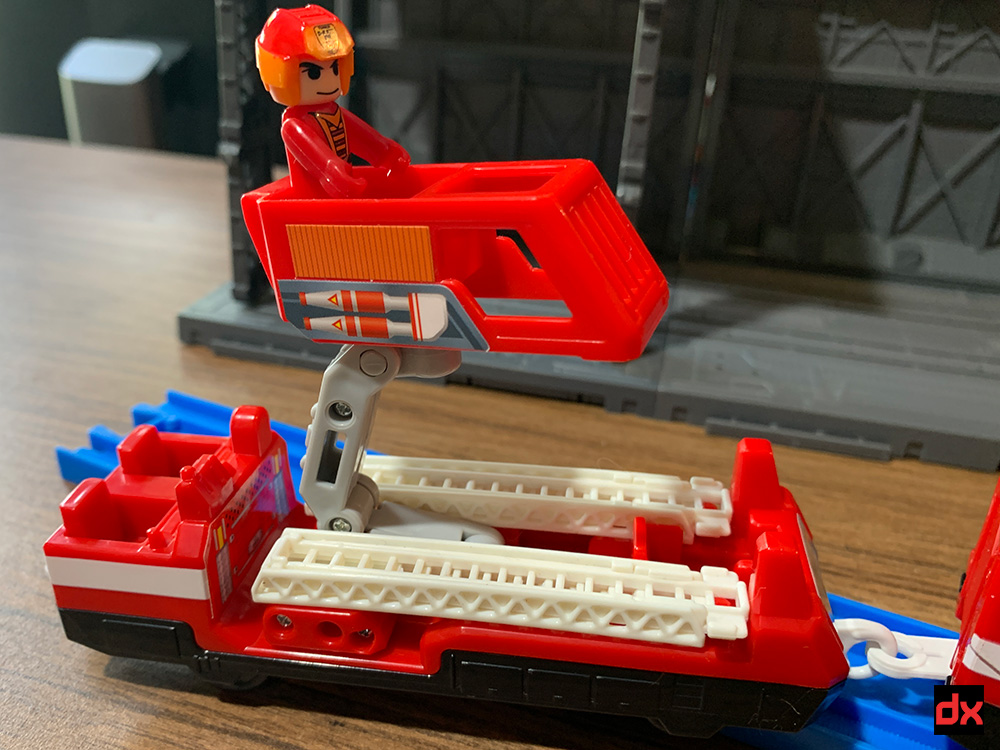 The ladders have handles at the top for the little figures to hold on to. 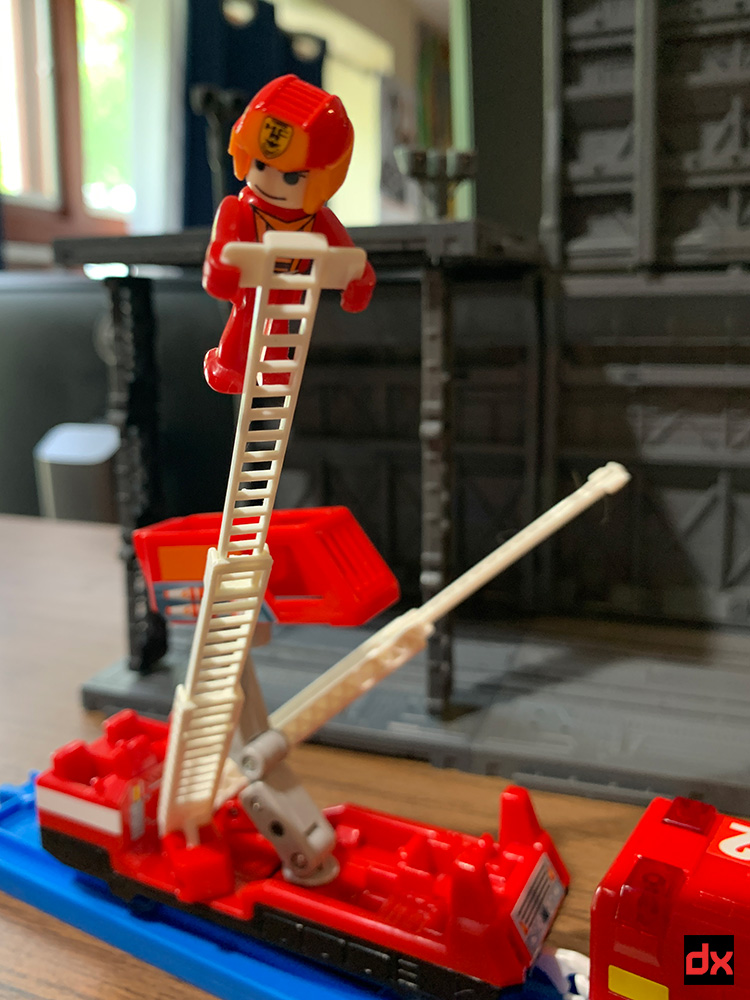 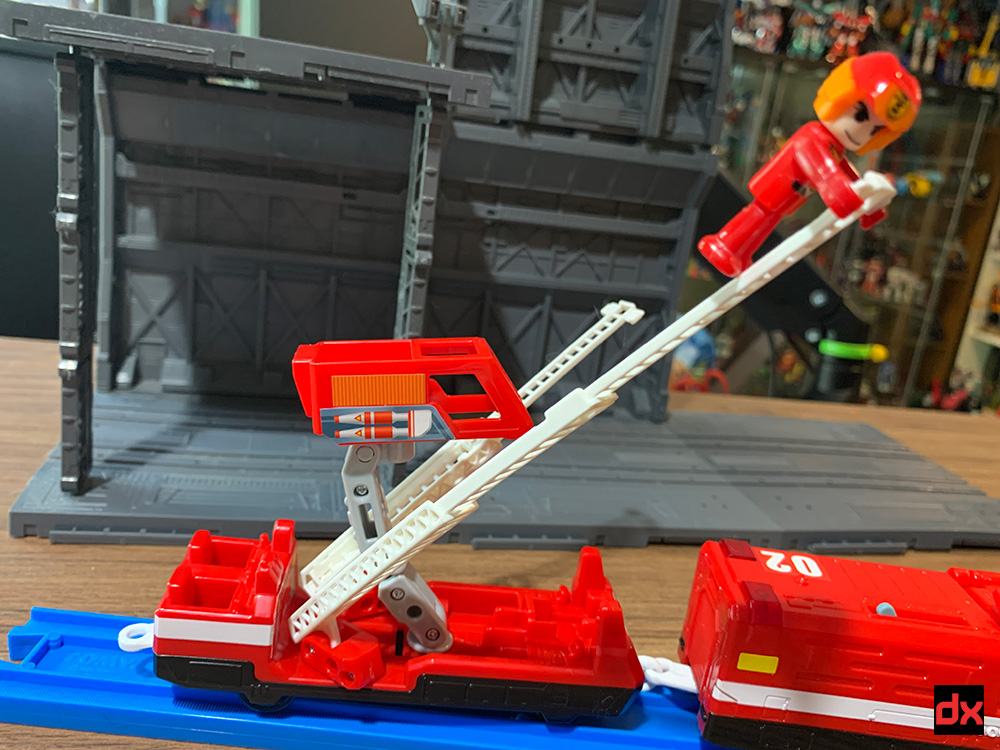 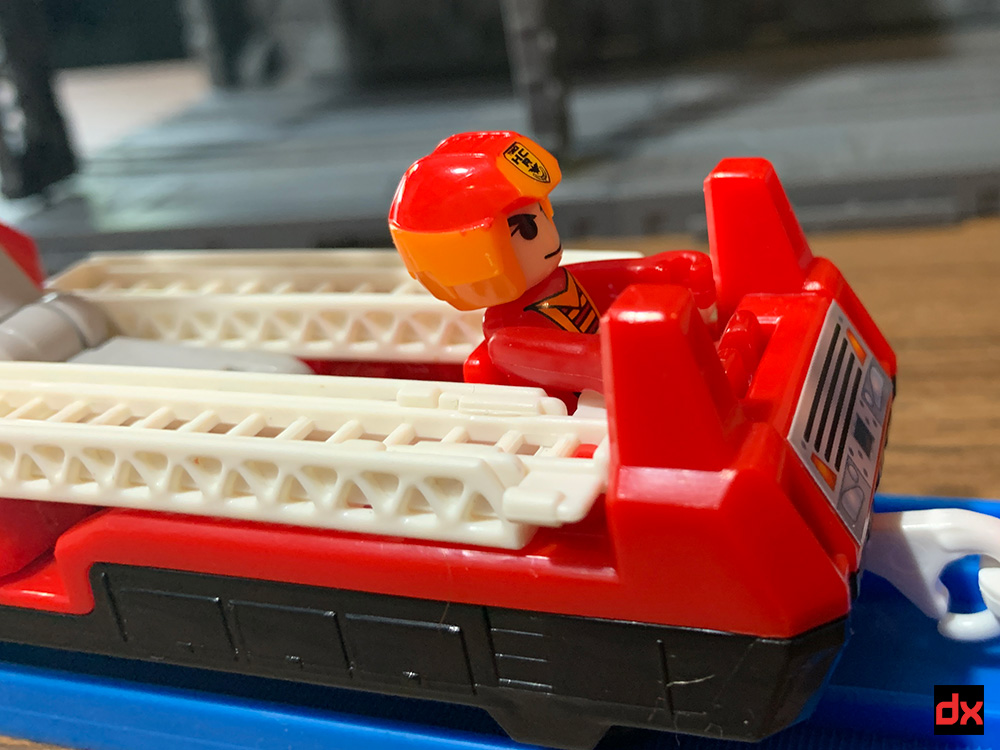 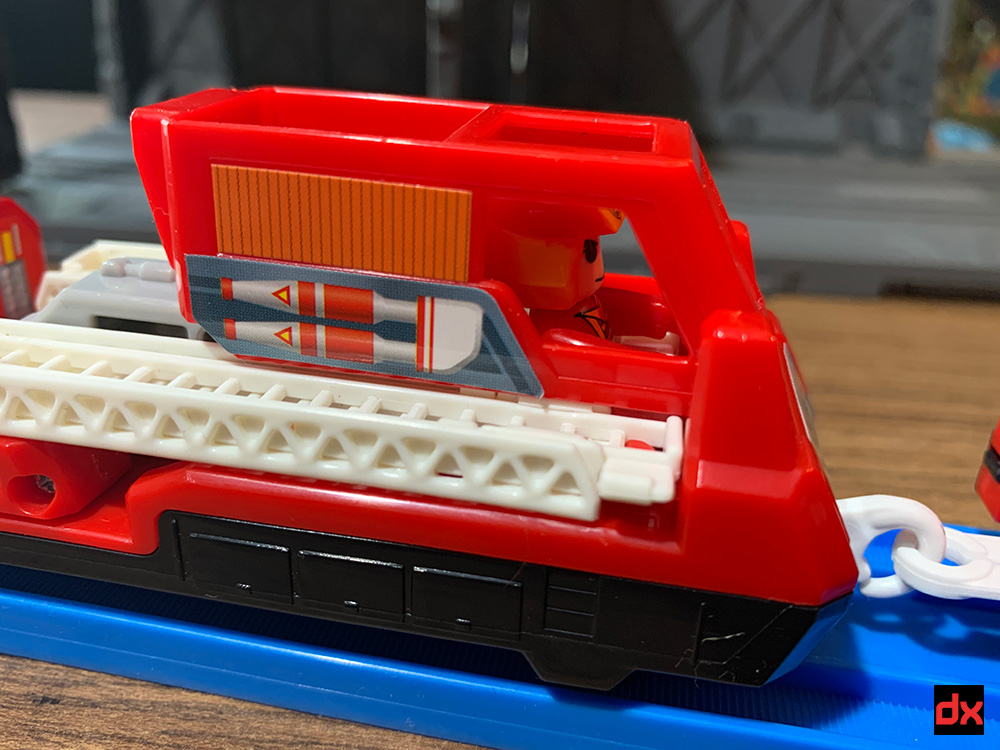 The set is fun, but also a missed opportunity. There are seats for at least SIX different little figures with this set, but only one is included. I know Tomy tried to sell packs of just the figures, but people didn't know what they were for.

Anyway, I have a few of these sets to review coming up, so stay tuned for more.