Slayn & Korpil Manufacturing’s T-6 shuttle was frequently used by Jedi Knights during the Clone Wars. Two large shield generators assured the occupants- usually Jedi Knights playing the role of ambassador- were protected from Separatist weapons. Because of this, the wings are designed to be effective both when on the ground, and when in the air by rotating about the habitable sections and engine block. This also gives it an extra edge in maneuvering by shifting its mass about. The T-6 was not armed with any external weapons other than what its occupants could carry with them, but its hyperspace drive and triple sub-light engines insured it could escape from trouble quickly. 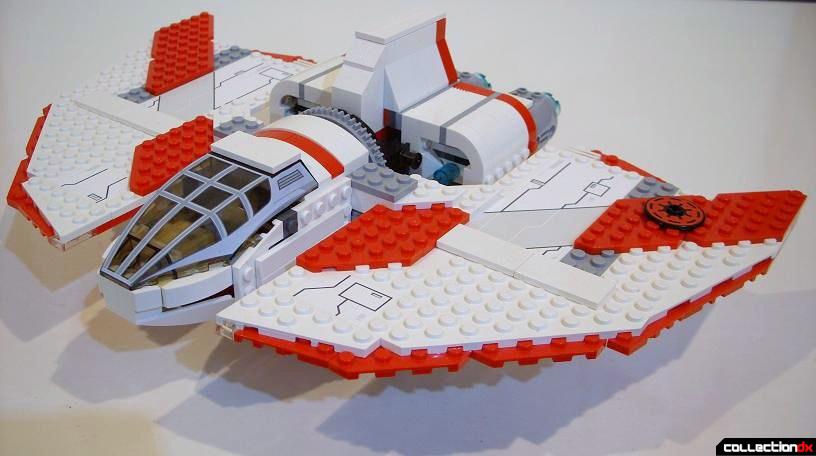 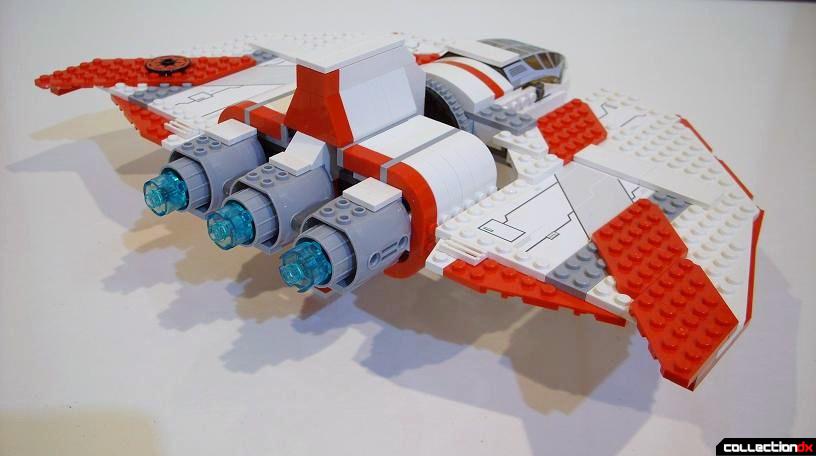 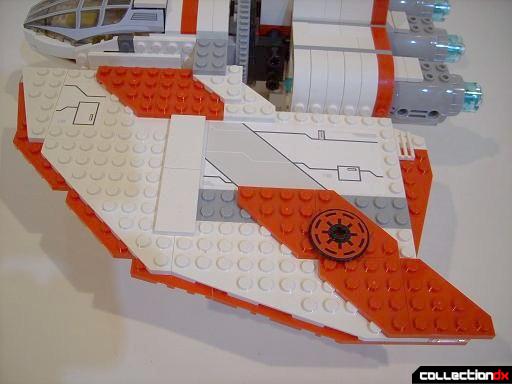 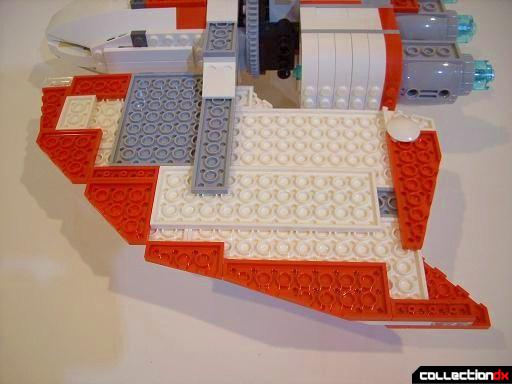 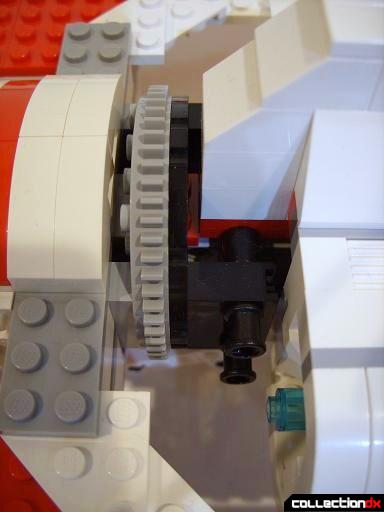 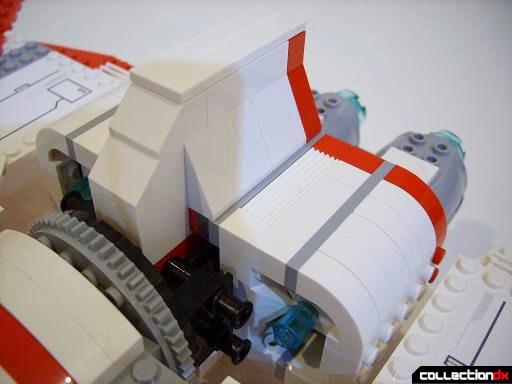 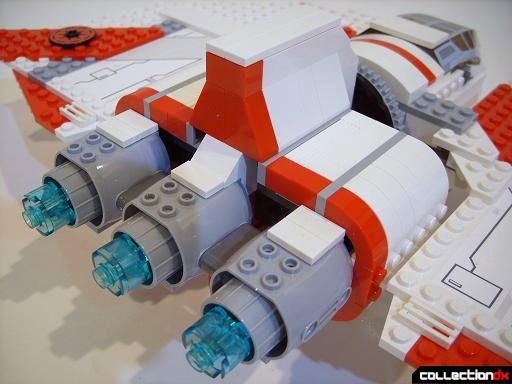 A small landing ‘foot’ under the engine section can be flipped outward to provide balance when resting. (The set will tip over if the foot isn’t extended! It isn’t much, but it is enough.) 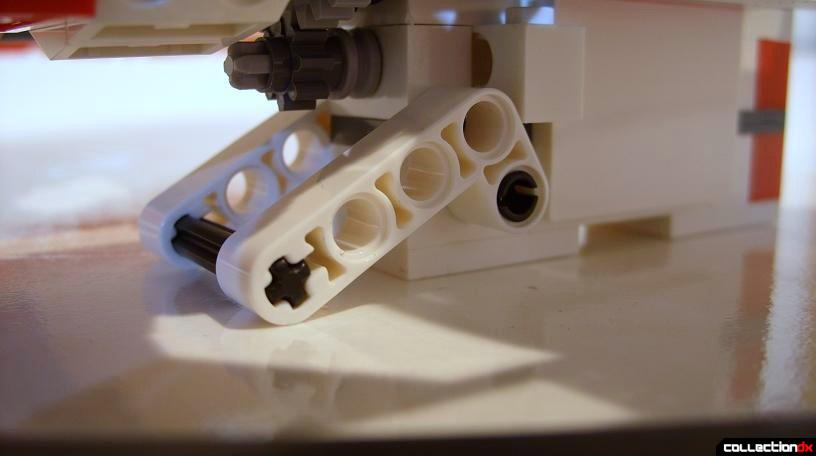 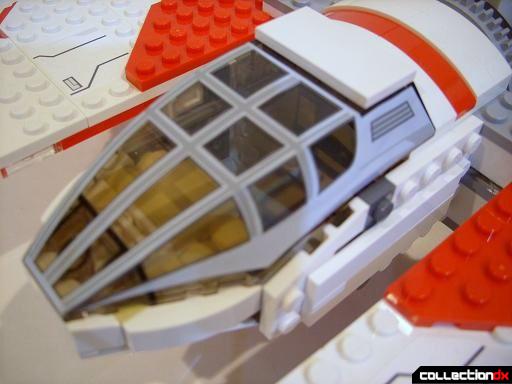 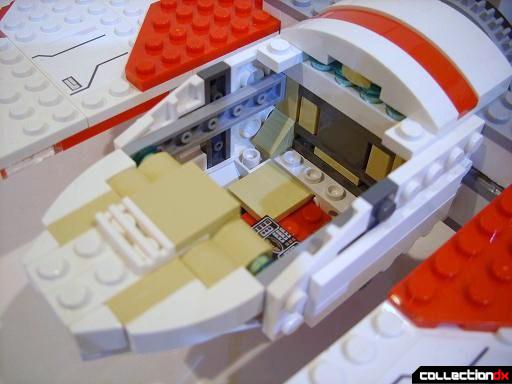 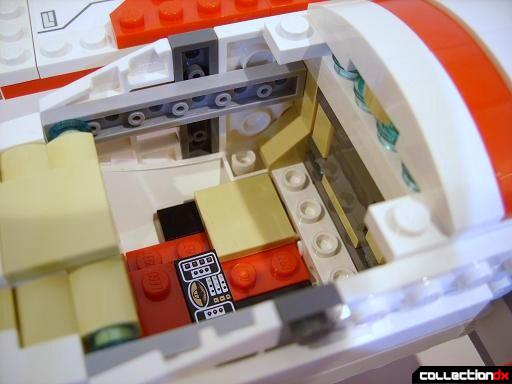 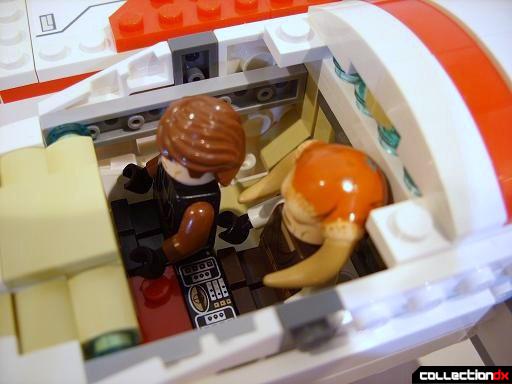 Additionally, the cockpit can separate from the rest of the shuttle as an escape pod! 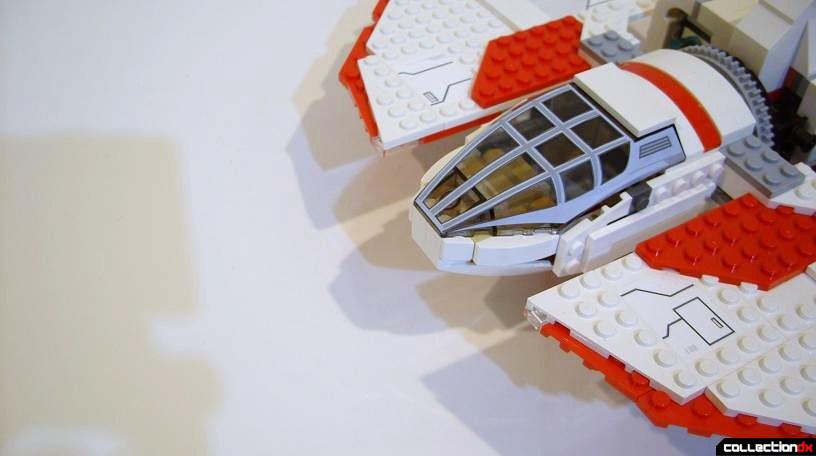 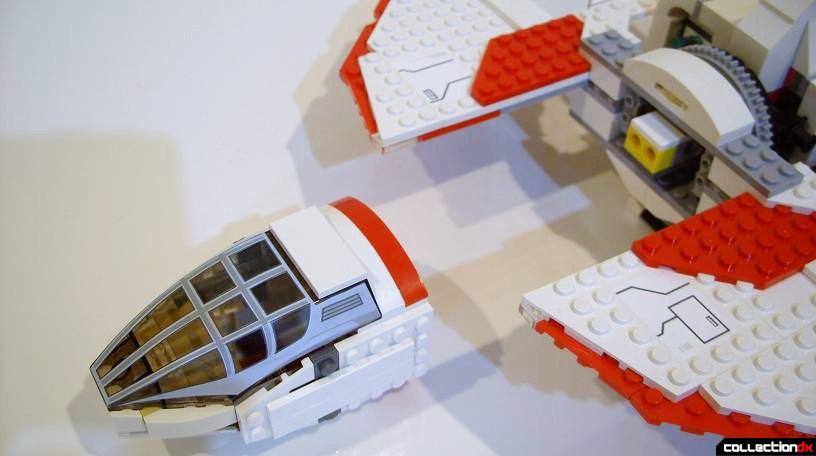 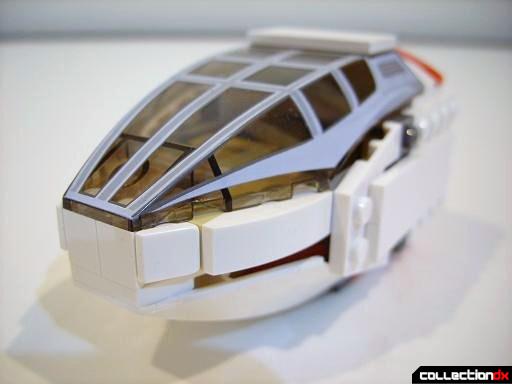 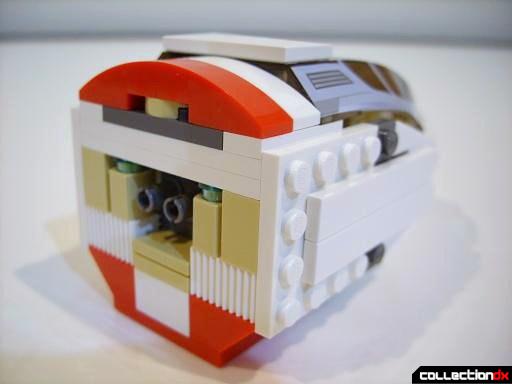 The wings can rotate about 360-degrees, and are held in place only by friction. 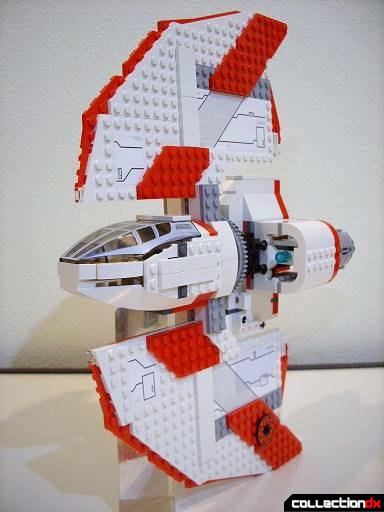 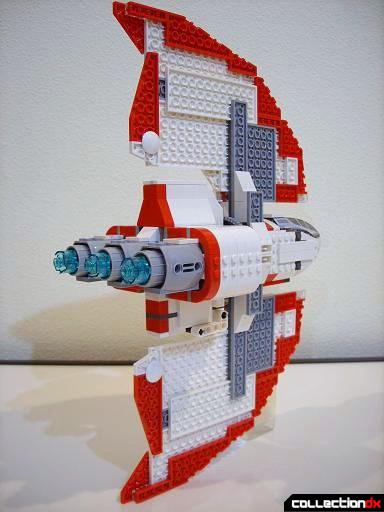 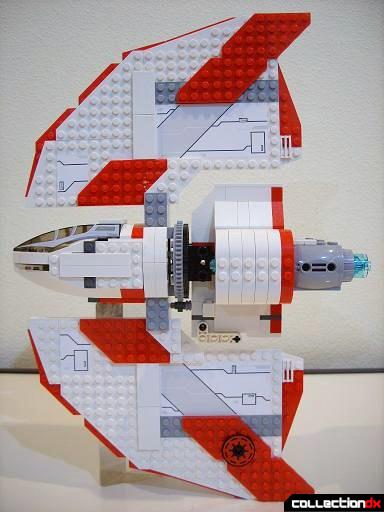 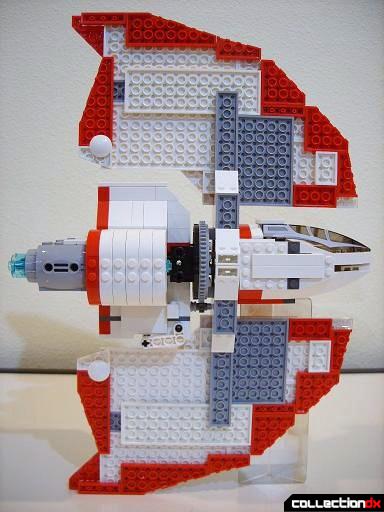 Though not seen in the show, the T-6 set comes with a pair of flick-fire projectiles located in the engine section. These can only be fired in flight mode. Pressing on the transparent-light blue exhaust of the two outer sub-light engines will fire the missiles! 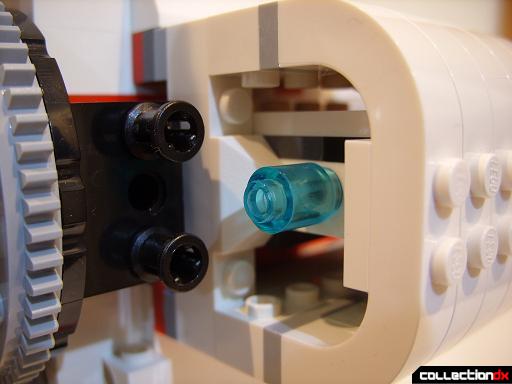 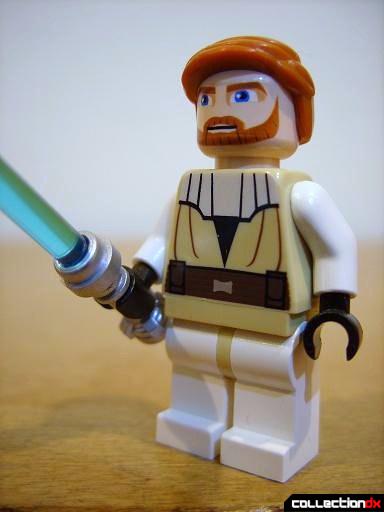 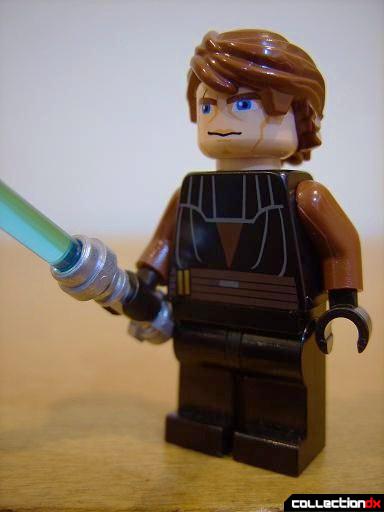 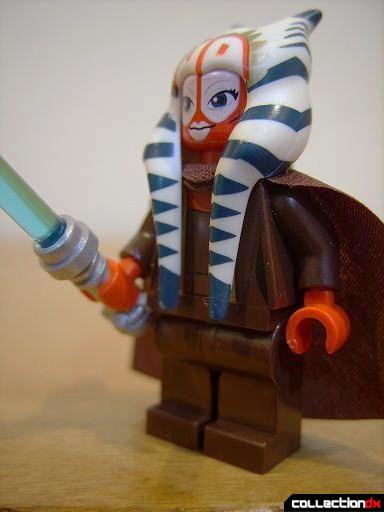 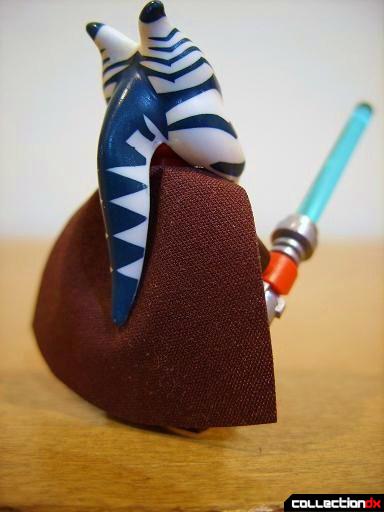 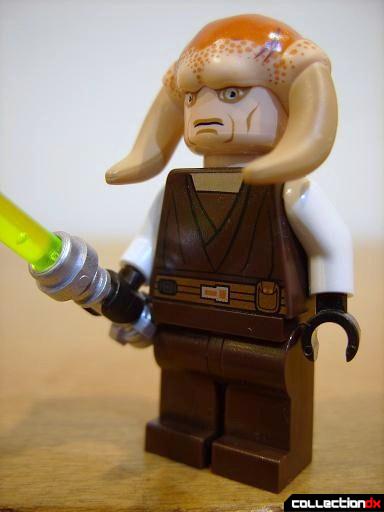 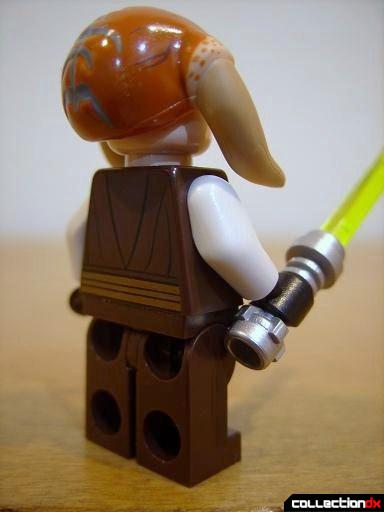 While there is just enough space for some of the lightsabers to fit inside, there is no dedicated space for them in the set.

This is a nice, simple, easy-to-understand set. Quite solid as well, though that is mostly due to the fact that there’s no smaller winglets, blaster barrels, engines, etc. hanging out elsewhere; it’s a compact design. It was also kinda fun to build, taking me no more than an hour to assemble!
I couldn’t figure out at first why the exhaust of the two outer engines could move so freely until after I had inserted the flick-fire missiles (because I hadn’t noticed the detail on the box… I keep doing that for some reason lately.) But that is an awesome an non-invasive way to shoot them off, which I really like! There are also no less than four 1x2 clear panels used for beacon and headlights on each wing! 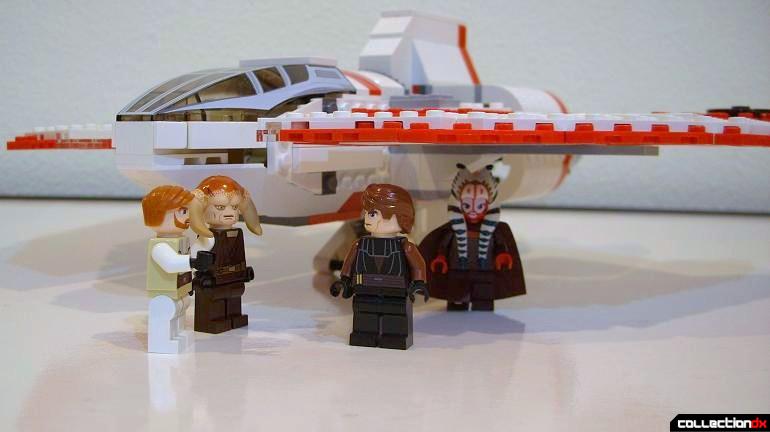 With some previous LEGO Star Wars sets I have, the wings lock in place by simply not turning the worm gear anymore or a latch folds in place. So I was initially confused about what the lever under the engine section was for because it was not made clear in the instructions what it was used for: a landing pad foot. Tiny, but necessary, and it folds away easily enough.
Primarily I got this set- like others from the Star Wars line over the years- because of how major sections move about. In this case, the two wings gyroscope around the shuttle’s body together, which I find rather awesome.
The paint applications on the two alien minifigs’ PVC heads is pretty nice for their debuts. 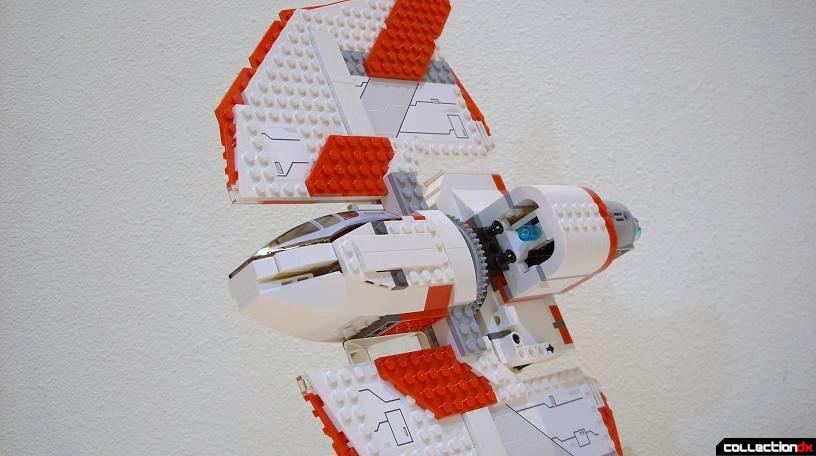 The set, despite what its wingspan may suggest, is deceptively small, and can only seat two of the four provided minifigs. (In fact, the wings would be 1/3 larger and the cockpit section slightly smaller proportionately to the CGI model seen in “The Clone Wars”.)
The one big thing that I scratch my head on is the asymmetrical design of the underside of the wings, which looks nothing like they should on top! They should be the same on both the top and bottom, but there’s a lot of awkward panels just hanging there underneath when it’s so nice a clean on top. Sometimes in the past this has been unavoidable, I admit, but… come on! Also, the wings are slightly off-center from the rotation axis at the center, which is another rather glaring oversight.

Aside from not fitting all four minifigs inside at the same time, and how the bottom of the wings completely lacks accurate detail, the T-65 Jedi Shuttle is a fantastic and well crafted set. (Certainly, it's not as ugly or awkward as the Twilight...) Highly recommended!

it's not big enough to hold four minifig. BTW is there ever a Mace windu minifig?

There are several Lego sets with Mace Windu, though they're mostly larger ones, but I don't have any of those.

You can get Mace Windu in 7868 Mace Windu’s Jedi Starfighter, that is currently in stores. He also comes in the old 3 Pack Magnet figures if you have a lego store near you.

Yes, I think I saw it my local hobby store...