Super7 has been around for years, but I feel they're blowing up now as a toy company because they've adopted the direct-to-collectors model that Matty Collector used for Masters of the Universe Classics. Literally.

Mattel shut Matty Collector down and awarded the MOTU license to Super7. They've continued MOTU Classics, and started multiple toy lines in the same vein, called Ultimates. Thundercats & Ninja Turtles are the biggest draws, but there are others, Conan, New Japan Pro Wrestling, one-offs. Voltron falls somewhere in between with two figures so far. 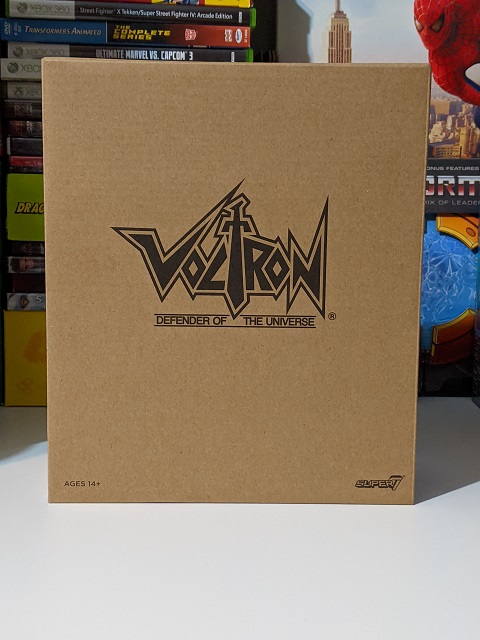 The outermost packaging is a cardboard mailer. Simple and effective for protecting the real goods. 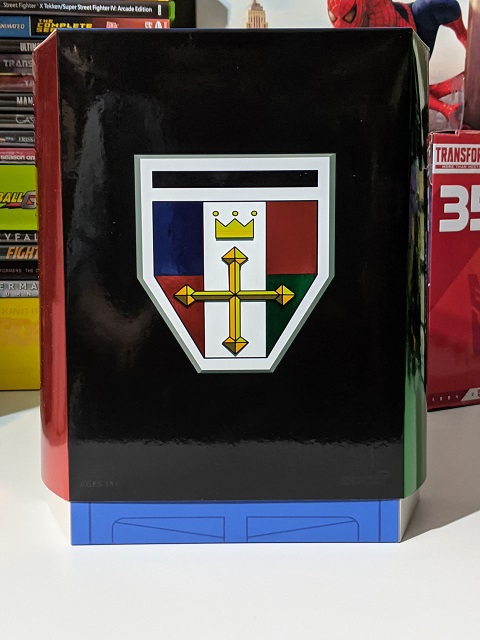 And once inside, I feel like Super7 is winning the package awards for 2021. If that's ever a thing. 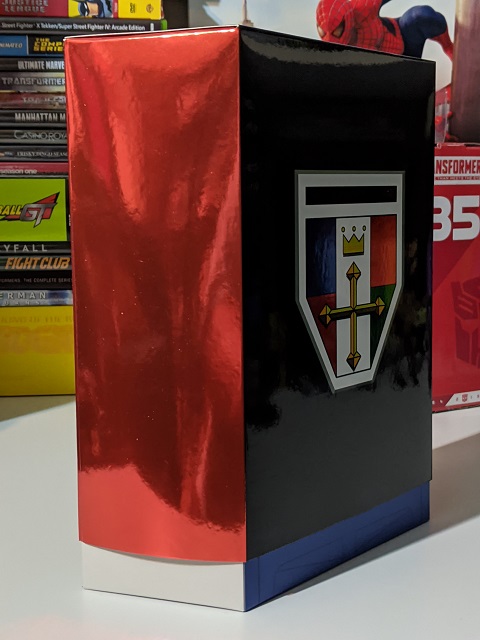 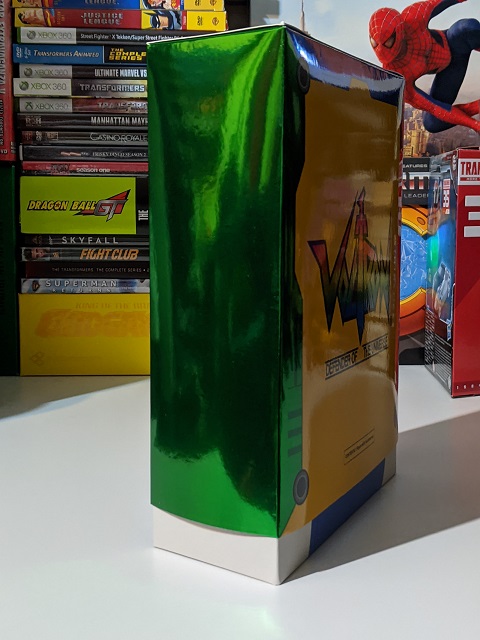 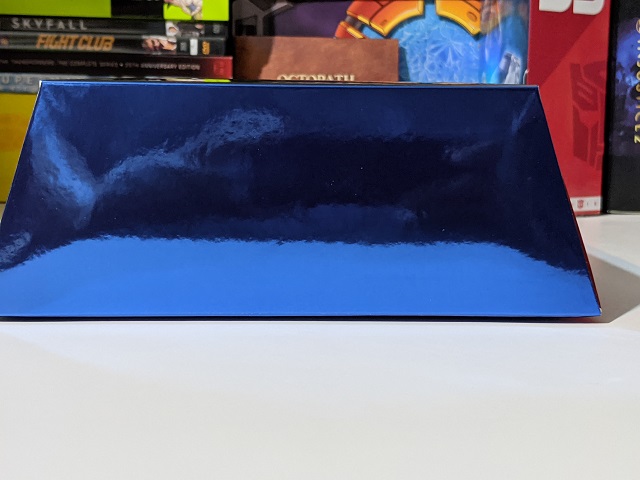 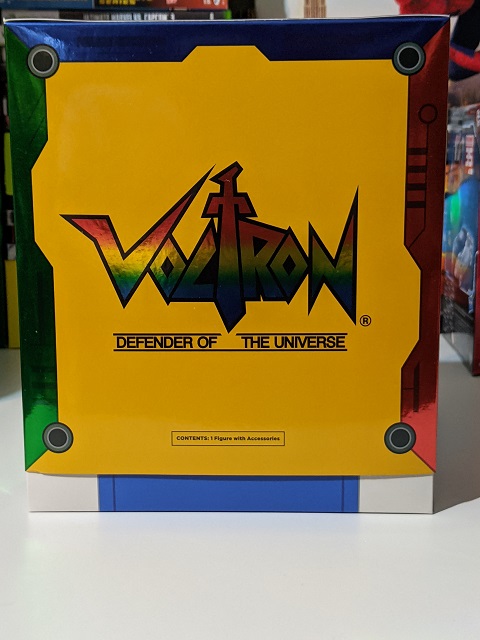 All the Ultimates figures come with a slipcase cover for the box. And this one is beautiful. Love the metallic colors. Though curious why the yellow lion gets shortchanged. 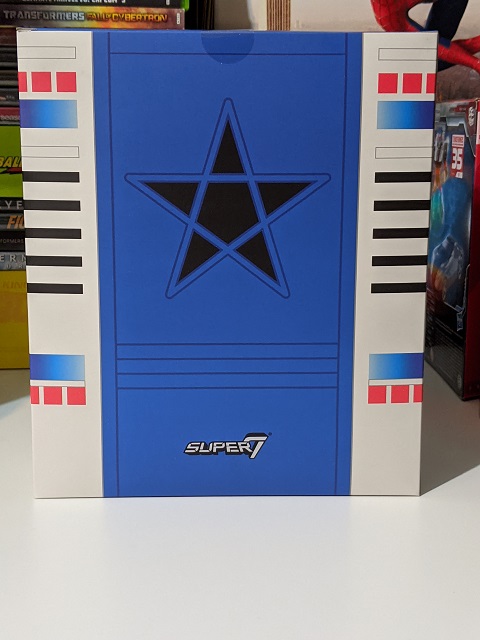 So much of Voltron's appeal is visual iconography. And from the outside, Super7 nails that. While the slipcase points to the lions and the chest emblem, the actual box gets the key indicator and the castle of lions. 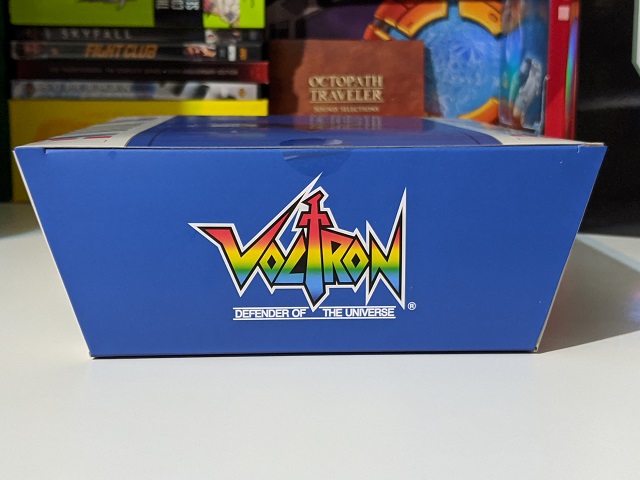 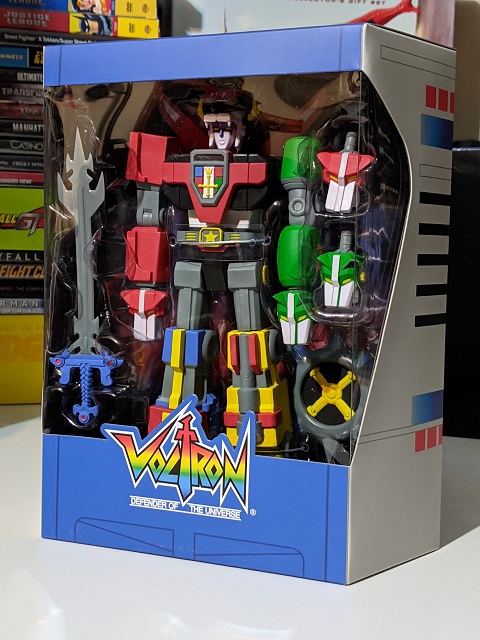 How close what's inside the box nails it is up for debate. 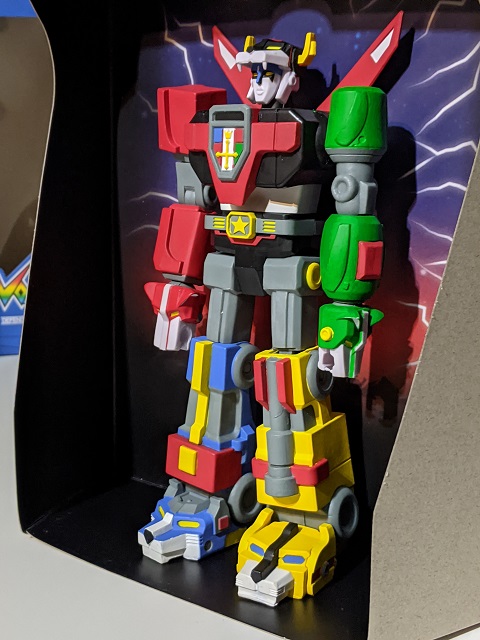 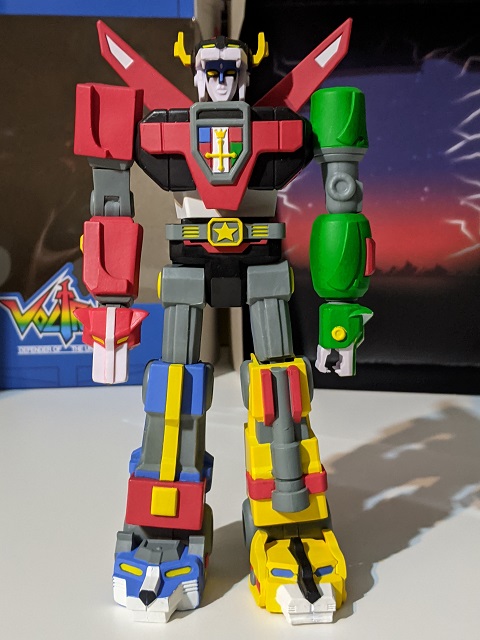 With this figure, Super7 tried to capture the animated look, the onscreen appearance of Voltron. And I'd say they were as successful as anyone else. Or at least compared to Bandai & Mattel. 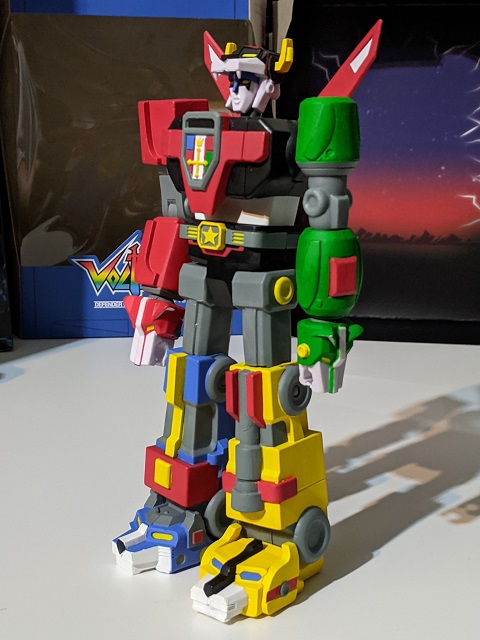 They captured the sort of bulkiness & lankiness of the animation model. And no transforming means no compromising for the sake of two modes. The colors are nice and rich. I haven't found any paint slop either, just the occasional flakes from green lion.

My only......actually, it's not even a complaint. Just an observation. In the cartoon, all the plain metal parts were painted white to stand out. Like the forelegs and elbows. So, if you're doing a screen accurate Voltron, those parts should be white.

Mattel did it, and Bandai did with the Super Mini-Pla. Super7 instead grayed all those parts, same shade as the sword. An interesting design choice. 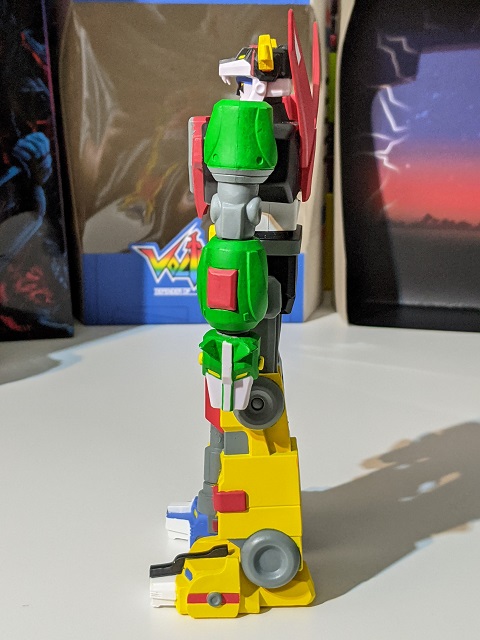 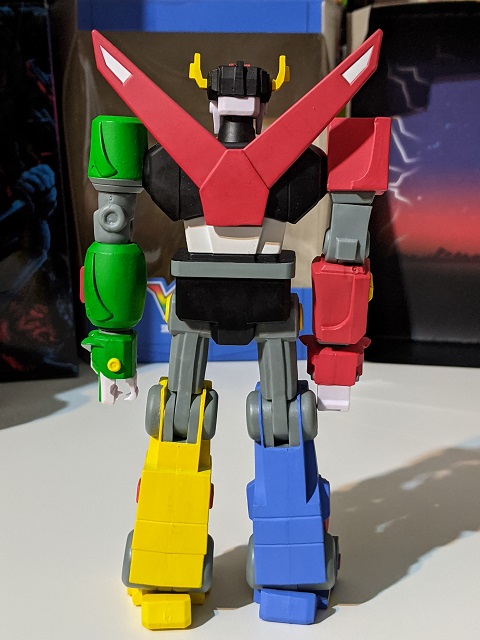 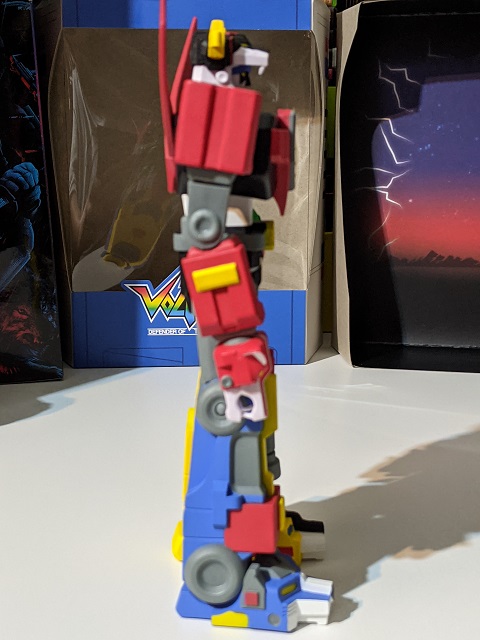 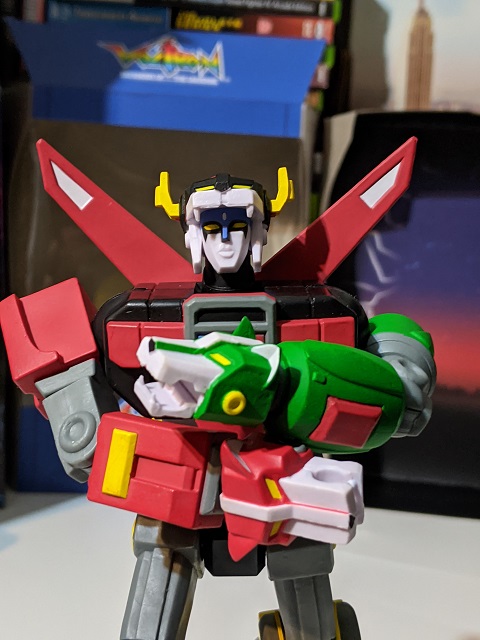 Articulation isn't insane here, but good enough to have fun. You can get some decent two-handed (lion-headed?) poses. And all this plastic feels solid in your hands, so there's no flimsiness. 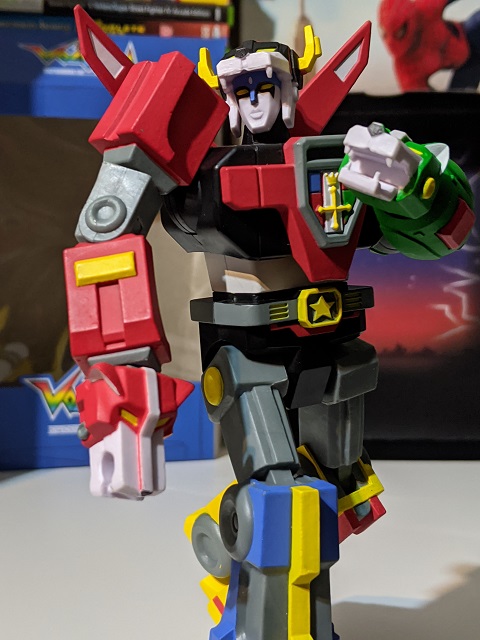 The shoulders swivel & hinge, but are limited because the shoulders are fixed around the connection. This Voltron is blocky, and I'm fine with that.

There are also bicep & wrist swivels, swivels above the waist & abdomen, and elbows with a little less than 90-degrees of bend. The head rotates 360-degrees, but only has a little tilt range. 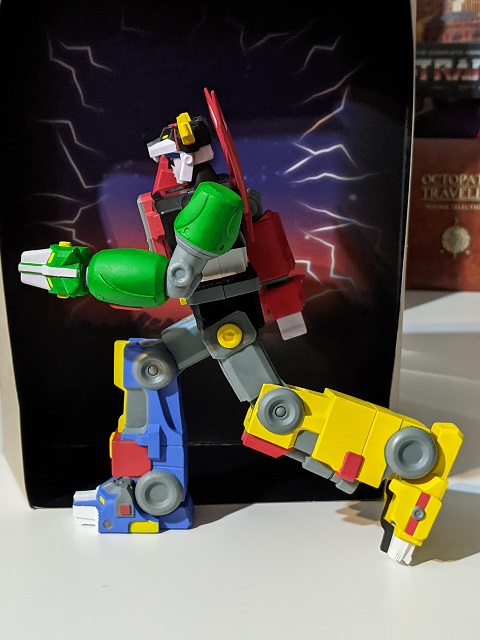 The legs are all kinds of stiff. They swing front & back really far at the hips, but only a little to the sides. The knees do get 90-degrees of hinge, and the feet have fair ankle tilt to both sides. 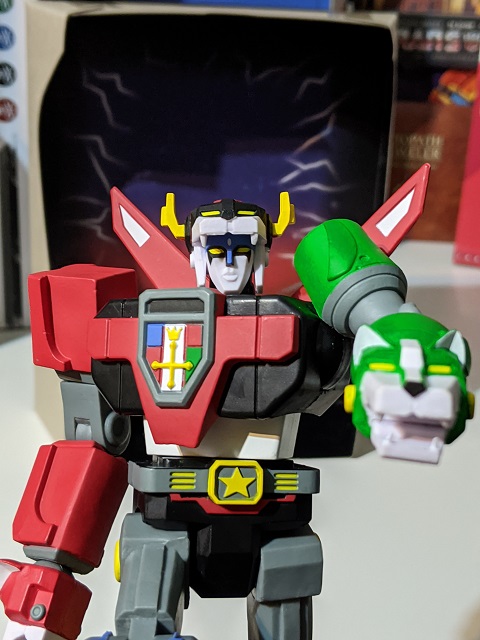 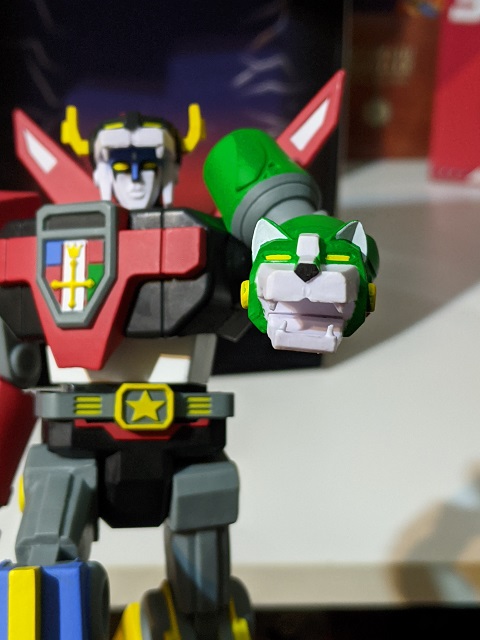 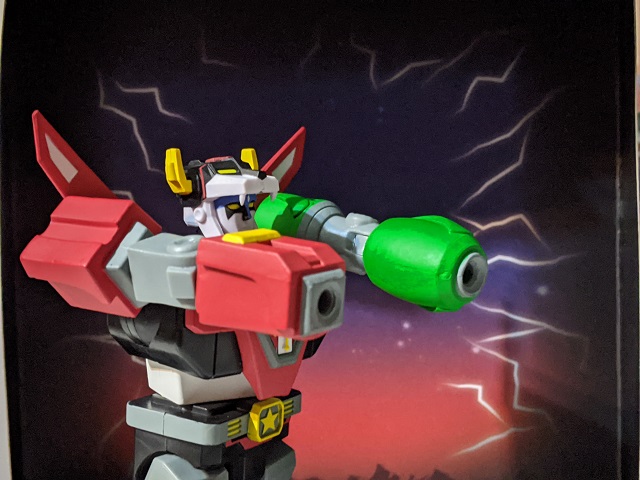 For accessories, you get two alternate heads for the red & green lions, mouths wide open. All are easy to remove and peg back in with a nice pop. 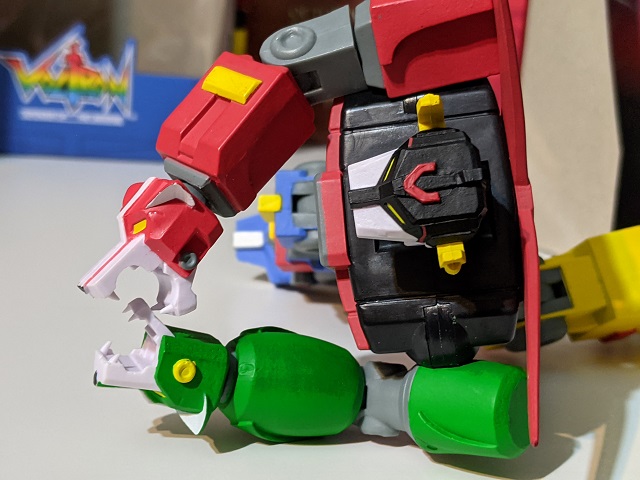 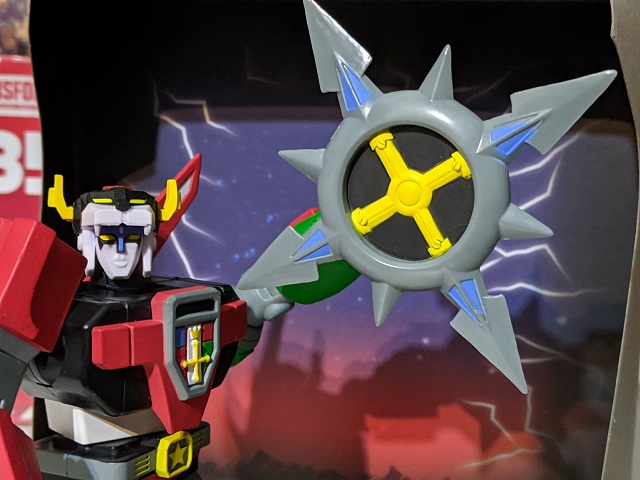 You get a "shield" or spinning laser blade that's really solid, with a huge handle to grip. 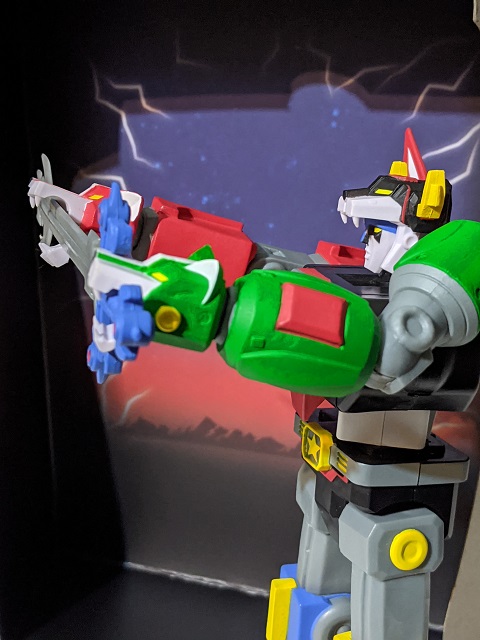 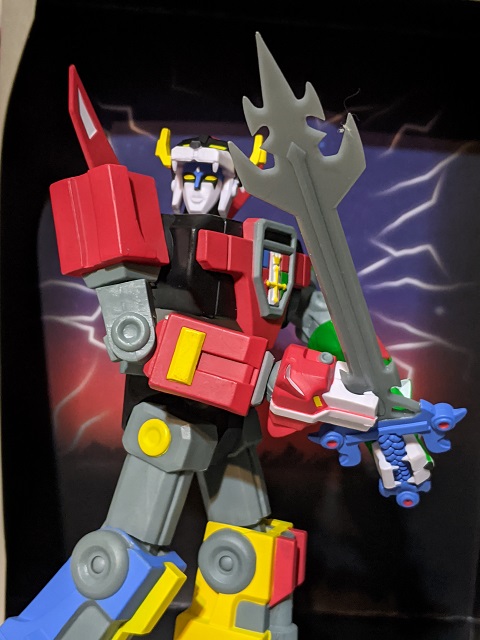 And you get the blazing sword. It works for this figure, but I'm disappointed they didn't include the hilt guard. It is easier to get a grip though. And wouldn't be surprised if there were a few scenes where it was missing from the sword. Super7's Ultimate Voltron is by no means perfect, but very fun, very affordable, and very easy. I recommend for all Voltron fans and/or anyone who likes good action figures. I think I like the Super Mini-Pla more, so much so that I'm probably getting a second one so I can have the lions & Voltron at the same time.

But this is nice too. And they just released a toy-style version with metallic paint and supposedly improved articulation. So I'm happy enough here to get that also.

2 comments posted
I really want to like this. I

I really want to like this. I love Super7, I love the people there, but this seems like a huge missed opportunity, especially from a company whose creation was around JAPANESE TOYS. The proportions are all off (why do the shoulders go so high above the chest?) Why are parts that are white in the animation grey? Why the Popeye forearms? Why have the discs where the lion legs retract on the legs, but not the arms? Either you lean into the animation model, or you lean into the toy model. It also seems like there are a bunch of weird mold / sculpt issues on the green lion. I would expect this out of Mattel, not Super7.

The package is nice though.

There is some weirdness for sure. But it does feel good in hand and looks good in person. Would be a huge plus if the articulation was a little better.

I've already got the metallic toy version, but haven't opened it up yet. We'll see how that turns out.