Without getting into specific shows or brands, my biggest interest in toys revolves around robots. And I've gotten into stuff from as far back as the 1970's. But I've never been into things like vinyls, jumbo machinders, and their ilk. Nothing wrong with any of it. It all looks cool when other people show it off. I've just never been pulled in.

But Super7 announced something that got me. Or at least it makes me think of all those vintage Japanese goods. 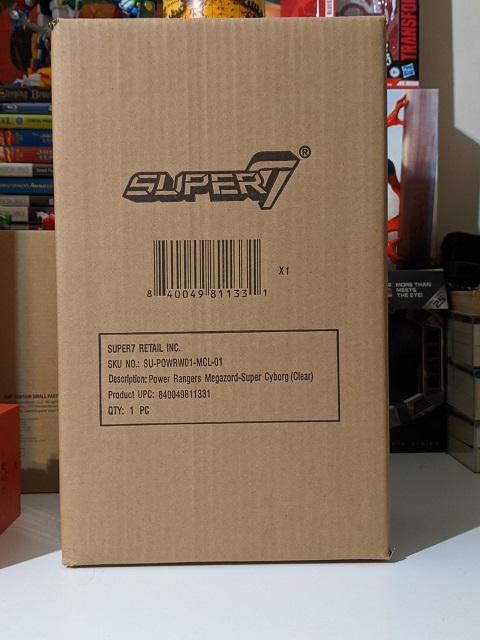 I've mentioned Super7 is blowing up. Another part of that is they're getting licenses left and right. Including Power Rangers, courtesy of Hasbro. So we've got a new Megazord toy I decided to snag. It arrived in a simple brown mailer, its own case. 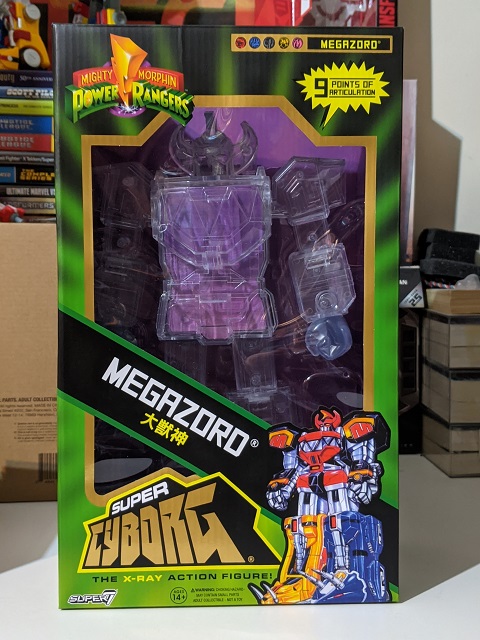 Between that and what you see in the window, you get the idea. I love the package details. This looks like an MMPR box. And the colored picture of the Megazord at the bottom makes a nice anchor. 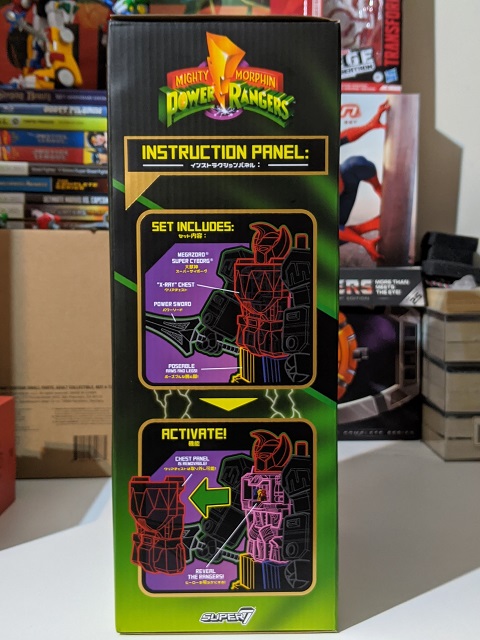 Each side of the box gives you something cool to look at. Here we have an instruction panel showing off the accessories. 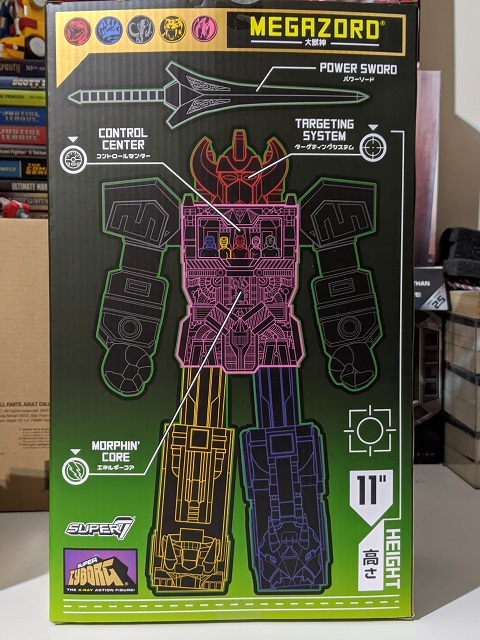 On the back, we've got a diagram. Between that and the previous side view, we see each section is colored to match the Dinozord that makes it. 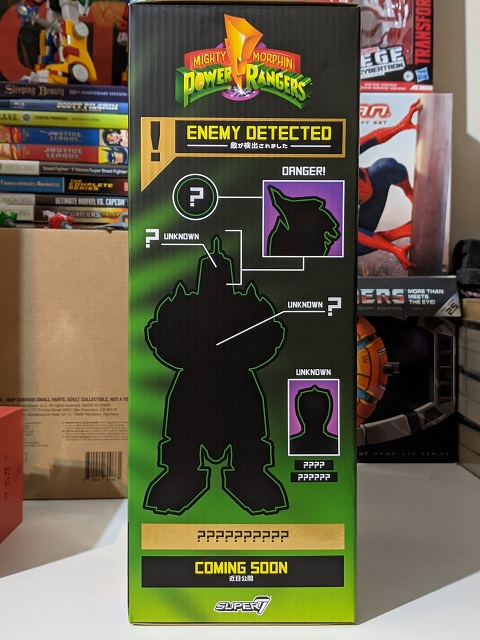 And on the other side, there's a teaser for the Dragonzord. I'm interested, but also curious. Every figure so far has been humanoid in shape. You can sort of do that with the Dragonzord, but then there's the tail. Hopefully we'll find out sooner than later. 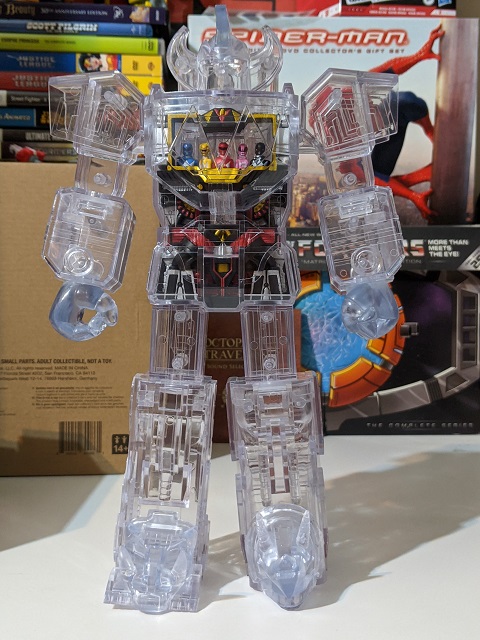 There's a piece of purple cardboard matching the inner tray that has to be removed from the chest plate. Once that's done, you're all set.

At 11-inches tall, this Megazord has impressive stature. It feels dense, solid. And the mostly clear view makes it an eye-popping visual at every angle. 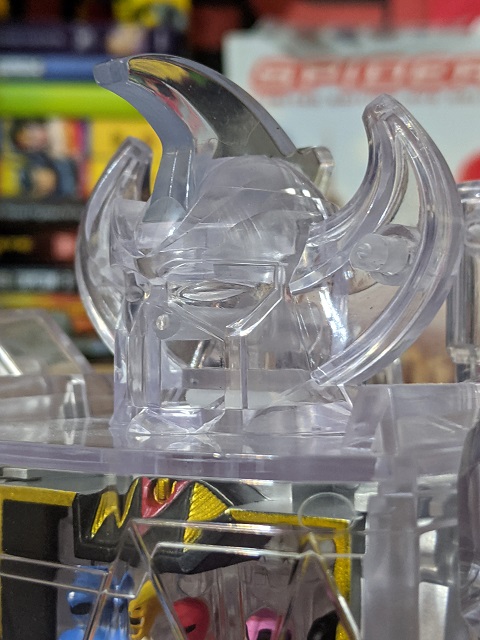 The sculpting is great, and that counts a lot here for me. If I was making a list of iconic robot heads, the Megazord would make the cut. Even clear, it holds my attention. 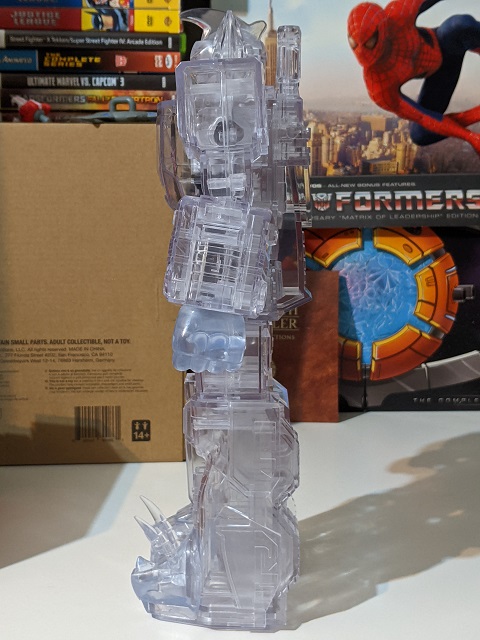 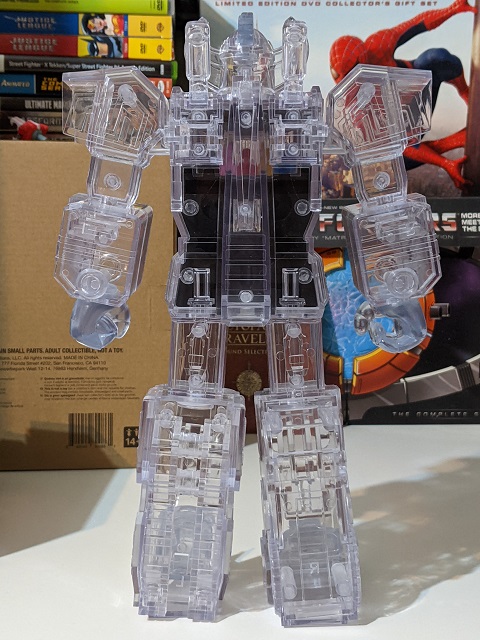 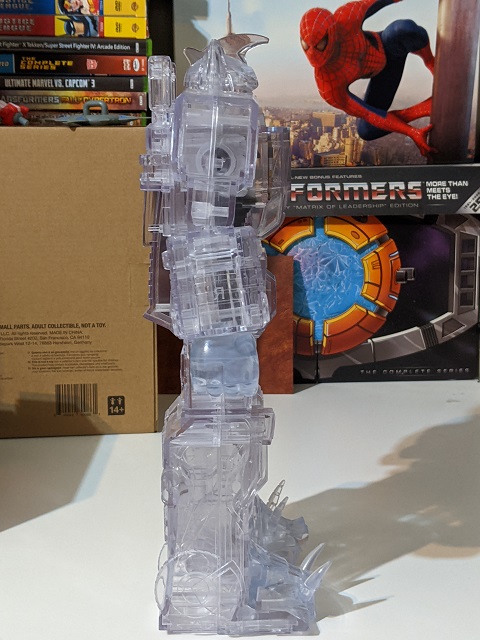 It seems every Super Cyborg gets at least two versions made, one fully colored and one transparent. As of this review, only the transparent Megazord is available. 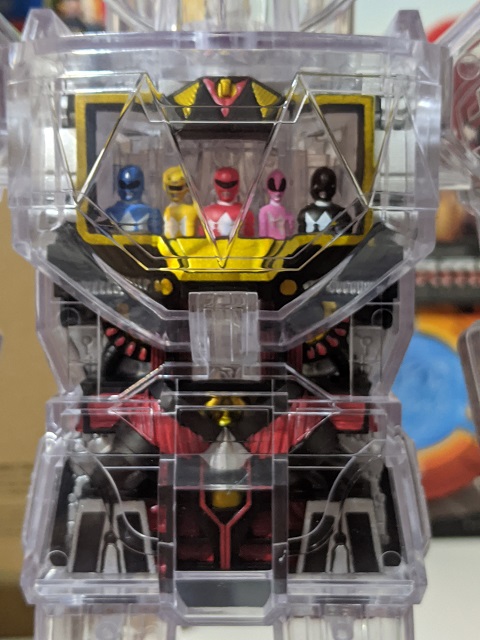 Now, the main gimmick is the removable chest plate. 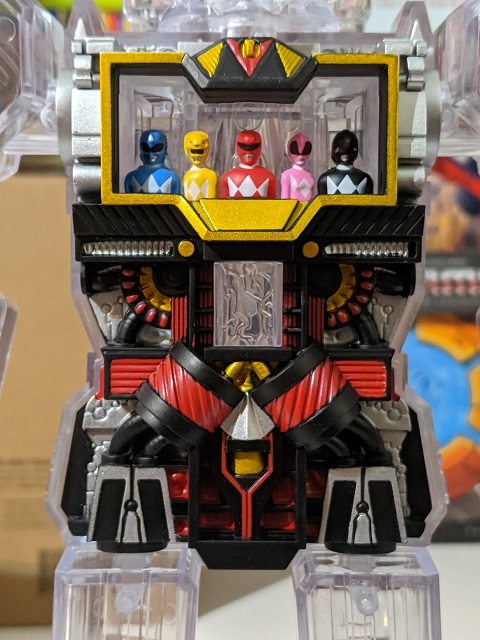 It slides into place with a snug fit, and comes off easily. I guess it's because the Megazord is a super robot, but this makes me think of the end credits of Mazinger Z, the original series. There, you see multiple x-ray shots. And that hooked me, when I saw this was announced.

This piece feels like it could be rubber, but I'm sure it's also plastic. The sculpting continues to impress, but the paint detail is sharp too. Nothing sloppy here. 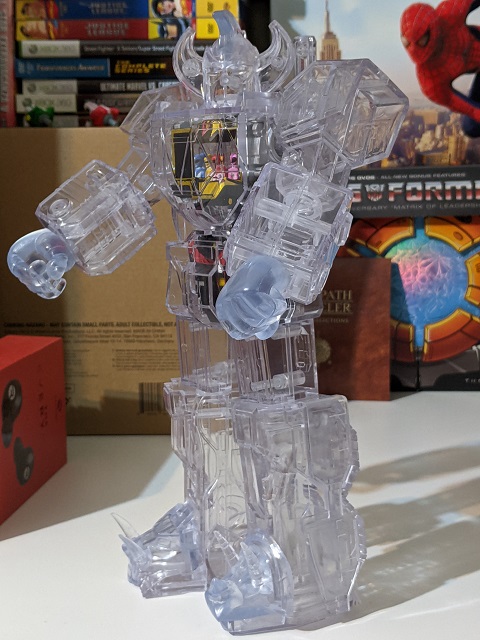 Like the box says, there are 9 points of articulation, all swivel joints. So you can turn the head, the arms at the shoulders, the forearms, the wrists, and the forelegs at the knees.

For the vintage vibe this whole package gives off, that's a perfect fit. 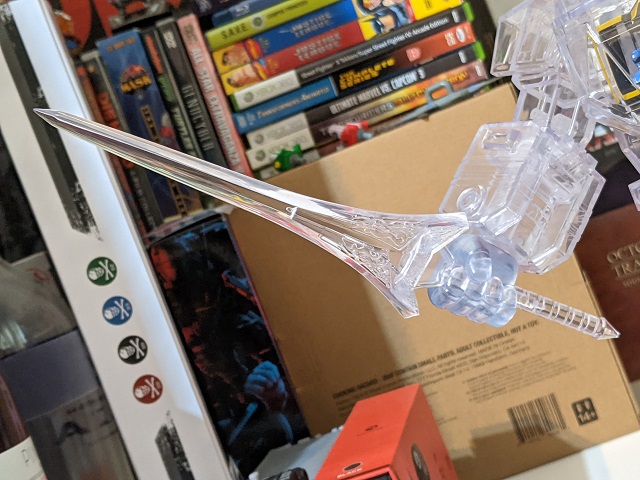 You also get the Power Sword. It's the same quality as the Megazord, but be careful when putting it into either hand. It's a tight fit, and the bottom of the handle is hard & sharp. 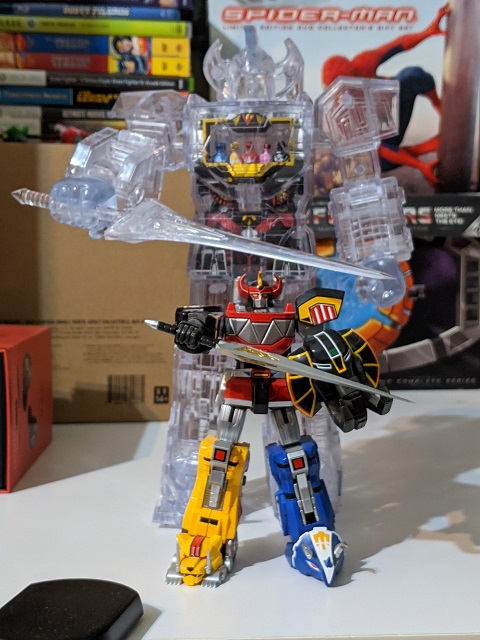 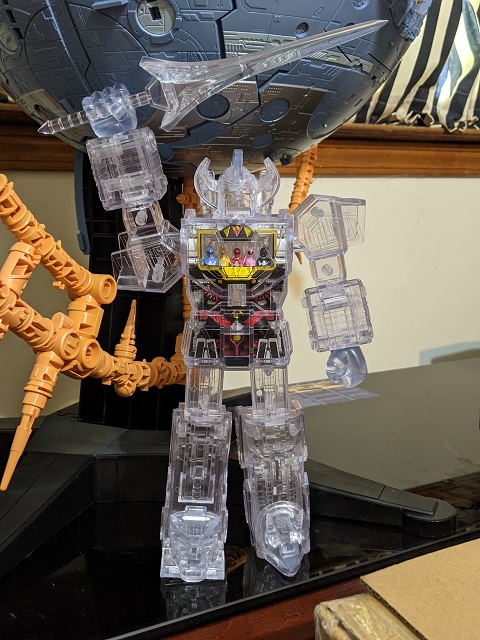 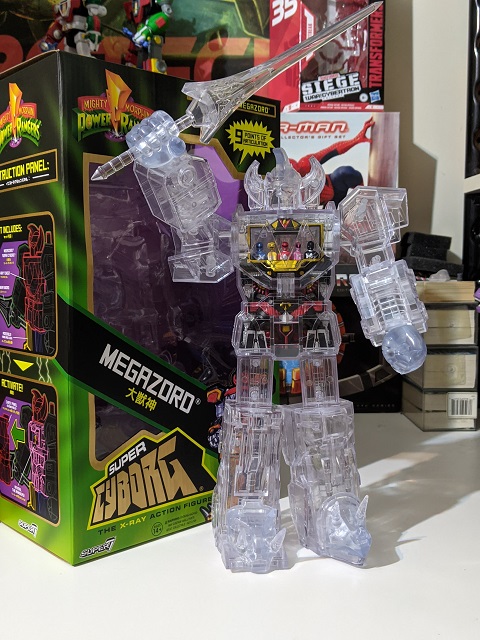 But regardless, it's cool to me as a lover of robots. And probably extra nice for big Power Rangers/Zyuranger fans. I'd say it's a great kids toy too, but $75+ and not being child-safe make this a collector's item.

As of this review, they've also done Optimus Prime, Megatron, Soundwave, and Soundblaster from Transformers, and the Cobra B.A.T. from G.I. Joe. We'll see if I pick any of them up, but I'm definitely looking forward to the Dragonzord.