I spent a lot of time cursed with writer's block for this review. I still haven't found a good way to start it after staring at it for a week, so I'm just going to jump in.

The Werkbau is a fusion of two different machines, both of alien origin. It's the only member of its family tree to make it to a toy, which is strange given that it's also sort of a half-way stage until it "evolves" into its true form. Despite being released under SRW:OG branding the machine is exclusive to SRW Alpha 3, one of only two FAF releases to not ever appear in OG media (the other was also from Alpha 3). While the Original Generation timeline has hinted that the Alpha storyline is not far off, one half of its parent machines doesn't exist in that universe, so the pilot, Cobray Gordon is free to appear but the Werkbau itself is not, at least not as it appears here. Anyway my egg timer is letting me know that that's all the time I have to talk about fiction, so watch this movie and then we'll get to the toy. 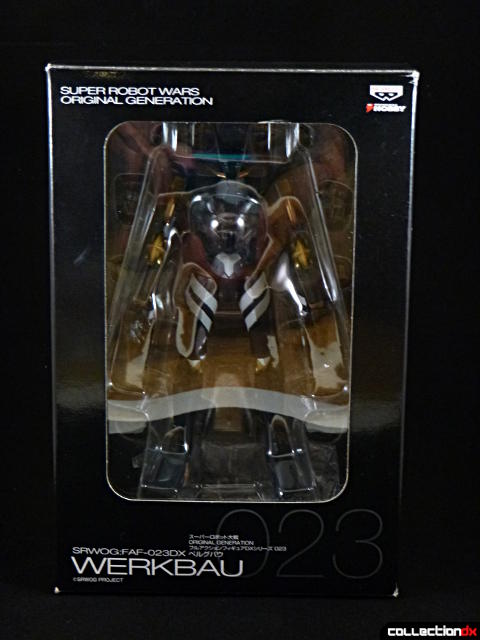 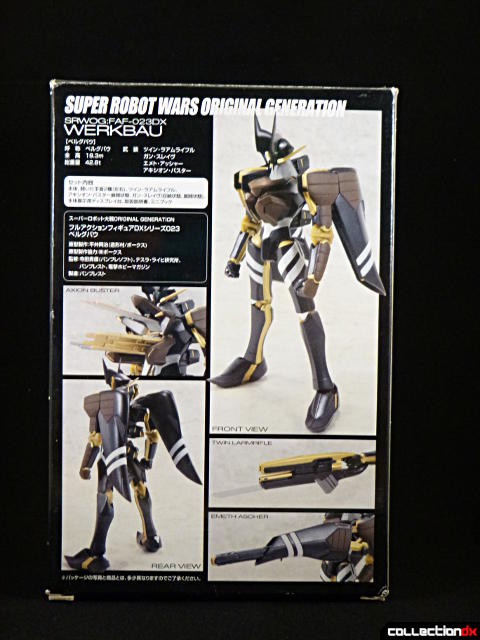 We are back to the familiar black box and everything that entails for this review. The Werkbau came along late enough in the line that it was never reissued.

It may seem like a tiny detail, but the Werkbau is ready to go right out of the package. It's the first FAF I have where nothing needs to be assembled. 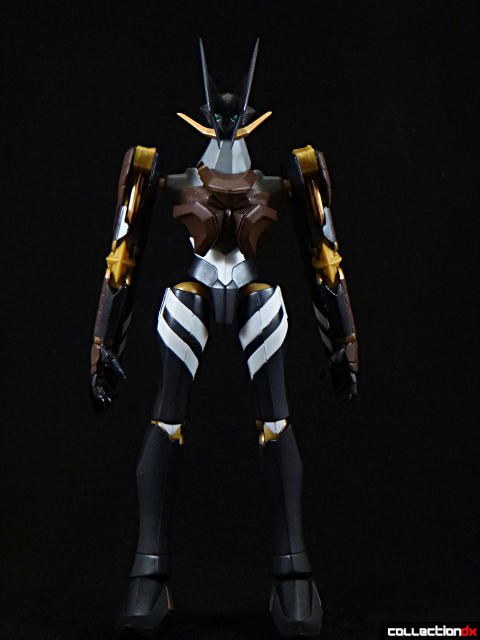 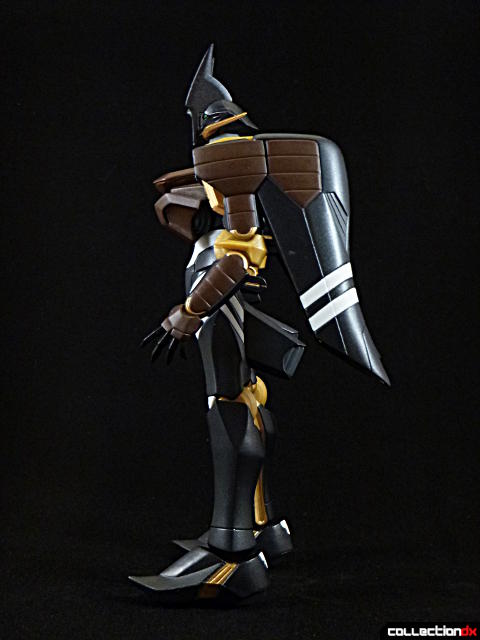 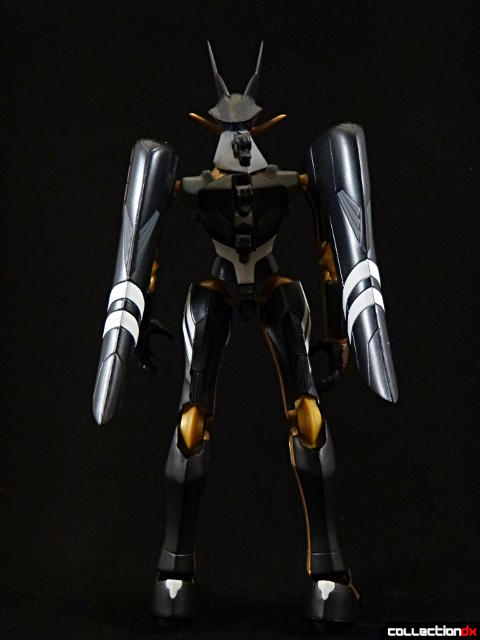 The Werkbau is a strange, organic looking design, almost like an Evangelion unit. It was one of several units designed especially for Alpha 3 by famed illustrator and Atlus founding member Kazuma Kaneko, who is most famous for creating the majority of the monster designs for the Shin Megami Tensei media franchise. It's quite easy to see Kaneko's style in the Werkbau's design. 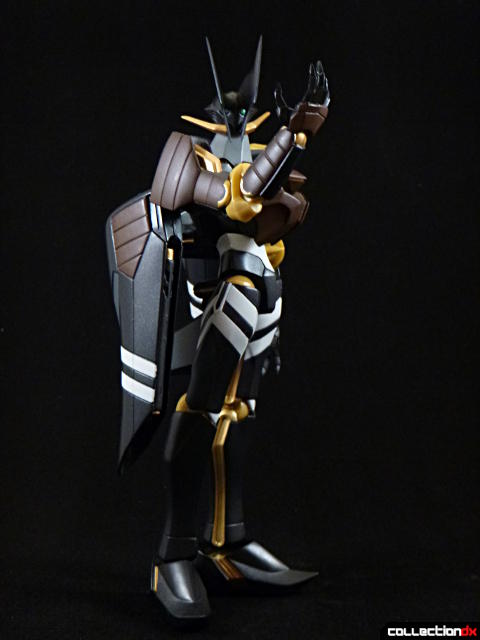 There's something almost demonic about it. The colors and slightly similar aesthetics remind me of another design I I like quite a bit. 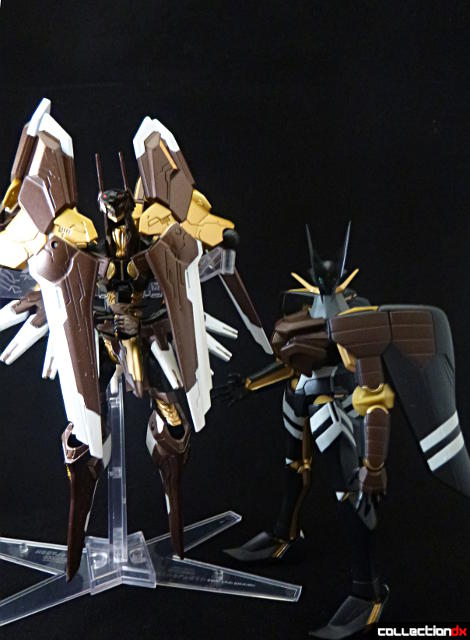 
Before getting further into the review, two of my biggest issues with the figure are already visible, and need to be addressed. First: Those. Joints. Are. UGLY. The elbows, knees and hips are supposed to be gold, the same as the vertical striping that along the arms and legs. Instead, they're an unpainted yellowish plastic, which not only breaks up the aesthetics of the suit, but is also a really terrible looking color. To rub it in, the figure featured inside the included booklet has proper gold joints. Second, there are some really big gaps where the arms and legs connect to the body. This is most obvious when looking at the figure straight on. The upside, if you can call it that, of these gaffs is that they can't catch you by surprise. They're clearly visible when looking at any pictures of the toy, and if you sought this figure out, it's very probable that you already knew what you were getting. Man this is...this is some FAF Stockholm Syndrome writing right here. 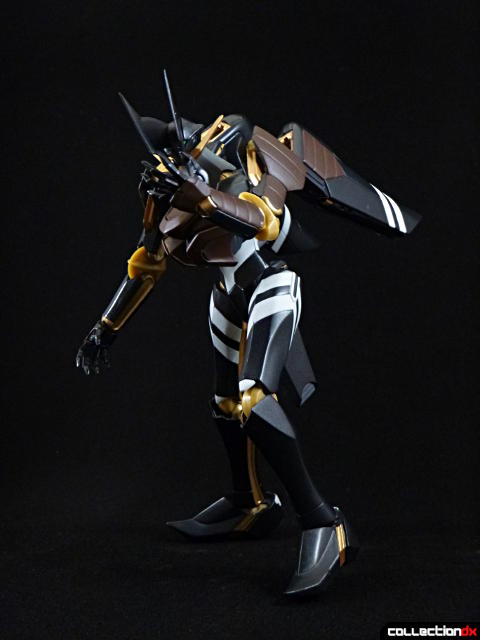 The construction of the Werkbau is a lot different from other FAFs, both in how the joints work and how everything fits together. Because of its unique elbow and knee designs there aren't any of Volks' usual double joints to be found. Rather than solid limbs, the arms and legs are two pieces that have been built over the elbow and knee joints, which unfortunately means they can't be removed for a gold paint job. The whole assembly is very much like an old Gundam model kit. In fact, a lot about the Werkbau's finish makes me think of a model kit rather than most FAFs. The shoulders are ball joints and polycaps, which is a little unusual for the line. There's much less PVC, and the paint job and texture is generally better. Everything feels quite sturdy, aside from the very thin and very breakable looking styrene pieces used for the Werkbau's face pieces.

A lot of poseability is limited due to how the limbs are built, although much of it has to do with the original design. The protruding elbow joints and the odd winglets on the back of the thighs prevent the arms and legs from being able to do very much. 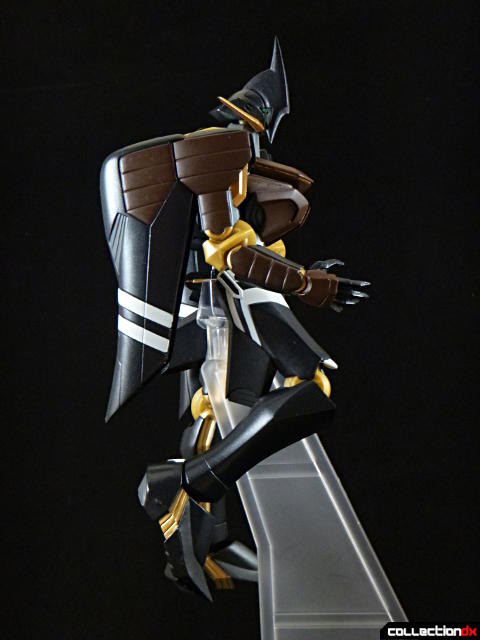 Yep, that's pretty much it.

These are problems that could be likely solved on a higher end toy, but this is a FAF. The arms at legs hold in place, at any rate. The right hip socket on mine is cracked, so the leg is looser, but for the time being it's still holding together. The head is on a ball joint, and the neck actually conceals another joint, although the sleeve over it prevents it from moving. There's no waist joint; the upper and lower halves of the body fit together in a 'V' shape, held in place with a large peg. It's not a tight connection, and turning the body causes the two halves to push away from each other and separate. The Werkbau's in-game sprite, tiny and super-deformed as it is, shows more flexibility than this figure.

Where the Werkbau really shines(?) is in its accessories. Its relative lack of movement is somewhat balanced by the fact that it's quite gimmicky. 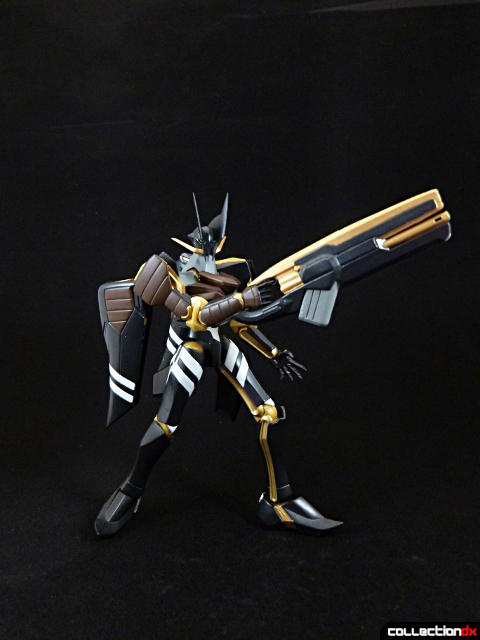 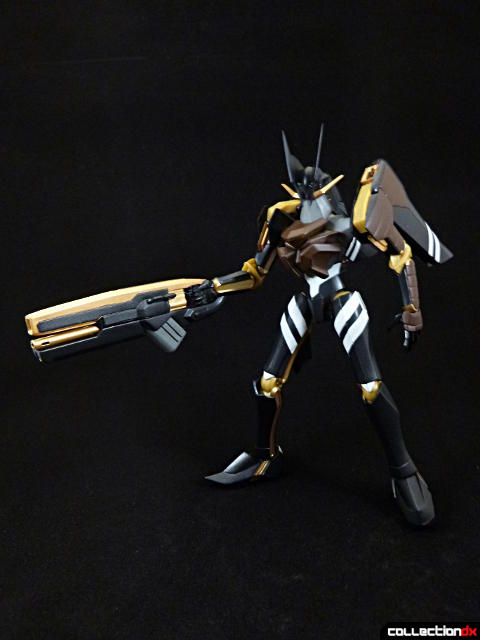 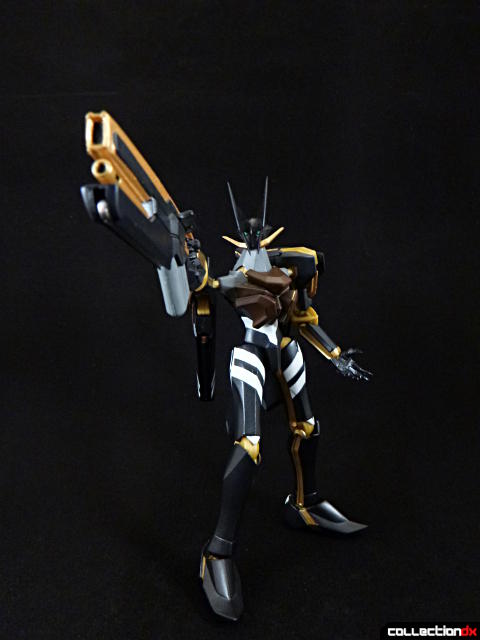 First up is the Werkbau's standard sidearm, the Twin Raam Rifle. Like any good Volks toy the gun comes with a hand attached to it. I was worried about the Werkbau's ability to support the weight of its gun, but the polycaps in the shoulders keep everything nice and tight.

Before I get any further we need to talk about The Pick. 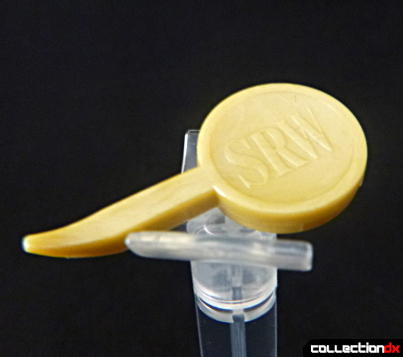 Like many of you scouring the web for FAF information, I too saw pictures of The Pick and thought, "What the heck is that home dentistry looking thing?"*. I am here now to reveal the mystery.

Some of the Werkbau's accessories have features that cannot be accessed by normal digits, and for that Volks has a solution. Take for instance the Twin Raam Rifle's bayonet, which appears in the Werkbau's lineart but didn't make it to the game. The bayonet is carefully folded away underneath the barrel of the gun, and looking at it you'd surely exclaim, "There is no way my clumsy human meat fingers could reach that!", and you would be right. Stop fooling around and grab The Pick, making sure to hold it carefully between thumb and forefinger. Please look to the following image for proper instructions. 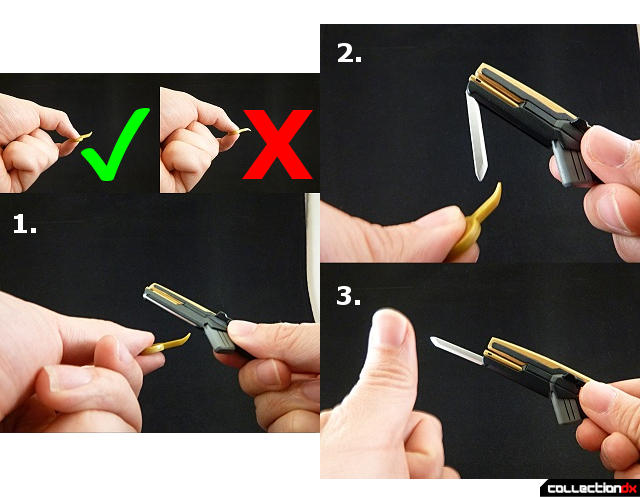 Next up are the Gun Slaves, the Werkbau's long range remote weapons, which are stored along its back. Let's not kid ourselves, these are funnels. You get a lot of Gun Slaves, two thirds of which are almost certainly destined to stay in the box forever. There are 12 total: a dormant set, a set to appear half emerged from the Werkbau's back with their wings visible, and a flying set. 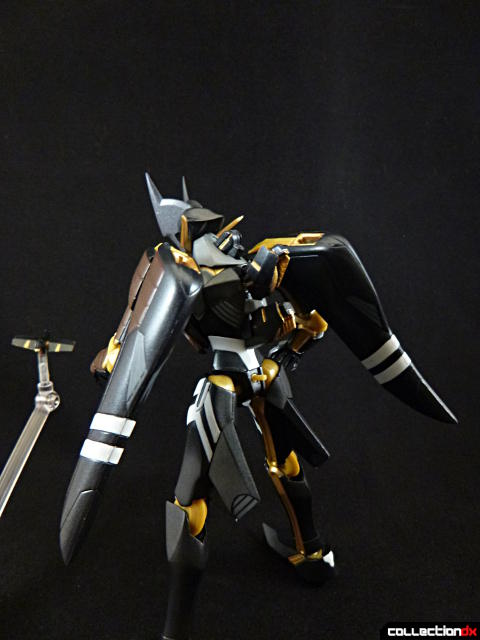 The two sets that plug into the Werkbau do so fairly tightly, and The Pick is unfortunately no use here. The 8 Gun Slaves with wings can rotate them; the wings fall off constantly but that's at least better than having them break, I guess. 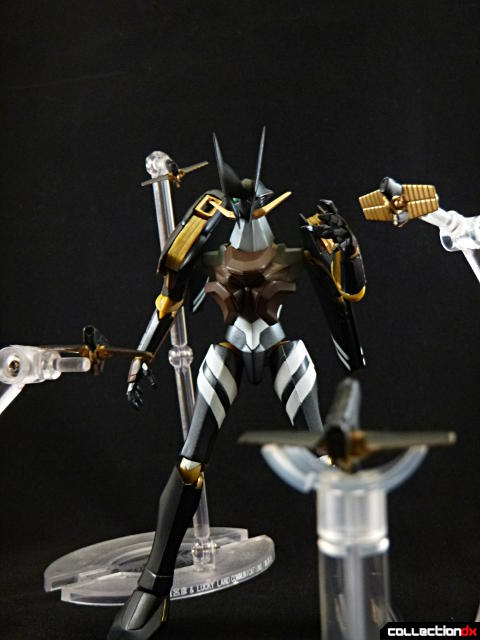 You'll need to provide your own stands to display the 4 flying ones. Basically, they're kind of a pain to deal with.

The Werkbau's shoulder 'wings' also contain another weapon, the Emeth Asher. This is a little more involved. The small gold pieces on the upper arms need to be replaced with a bridge piece to hold each wing in position; swing the wings over the shoulder and lock them into the bridge. 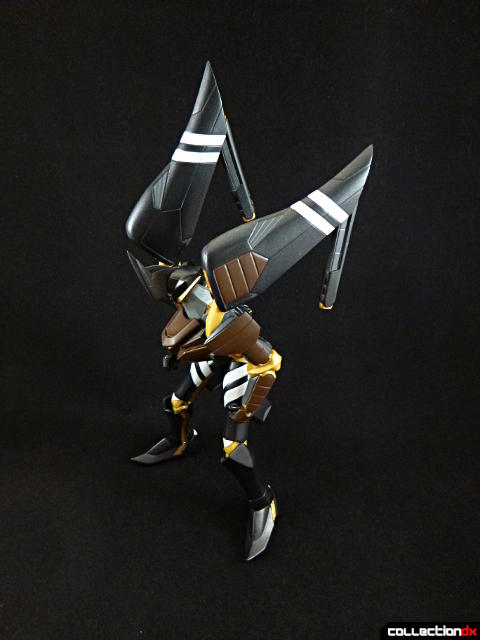 After that, swing out the guns. 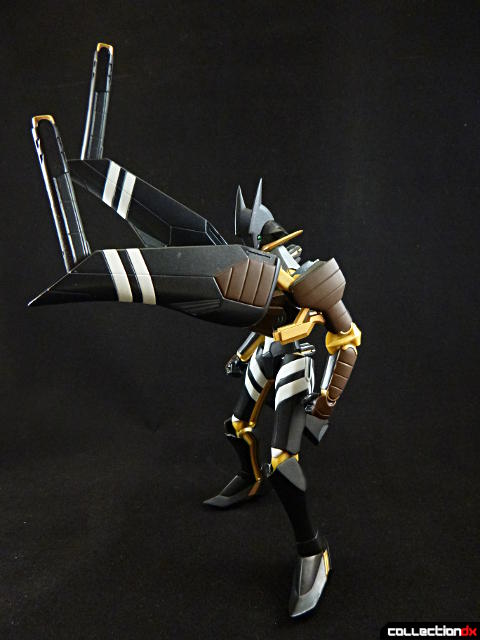 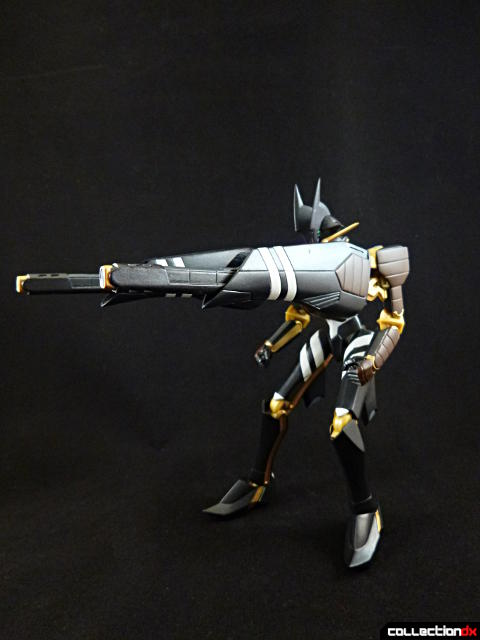 The Pick is a necessity here; even armed with fingernails the barrels are too recessed and stiff to get to without it. The Emeth Asher is a neat gimmick, though the Werkbau's inability to crouch to properly replicate the attack diminishes its effect somewhat.

Pay careful attention to those little pieces too, they're hard to get in place and they have a tendency to fall out.

Finally there is the Werkbau's ultimate attack, the chest-mounted Axion Buster. Thankfully this is a single piece, which swaps out rather easily. 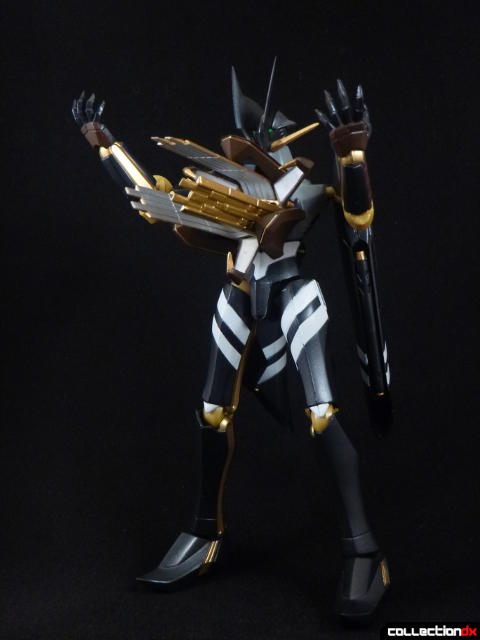 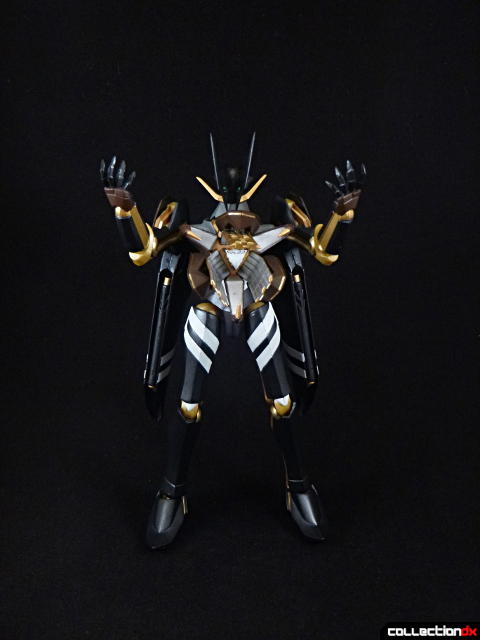 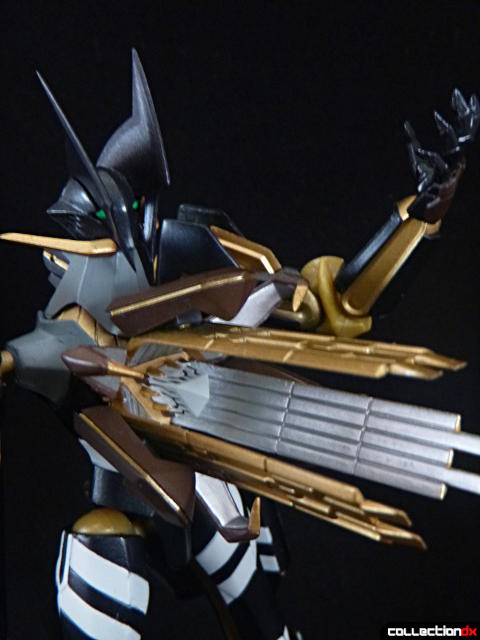 The three extended panels of the weapon are extremely fragile looking, and the piece ships with a cardboard wedge to protect it during transport and storage. I have doubts about it surviving any sort of fall, so it's probably best not to display the Werkbau with it attached, at least without a stand.

As a big fan of all things Plissken, be they named after firearm, Native American, or reptile, I've had to make peace with the fact that I'll most likely never see an Astranagant toy. Heck, I'd take a Dis Astranagant over the Werkbau, but the Werkbau is all there is, so that's what I have to make do with. The Werkbau's finicky nature and unorthodox styling means that interest is most likely limited to super fans and/or weirdos. It's uncommon as FAFs go; it doesn't come around a whole lot but it's not something that'll break the bank. A used Werkbau still goes for around what it originally cost, give or take 1000 yen.

Next time: R-Blade, probably. I’ve realized that I'm not very good at actually sticking to these.


*Please do not use The Pick for anything other than its intended purpose.