In order to further pad the number of actual 'super robots' in my Super Robot Wars reviews, and because it wasn't too expensive, I picked up this guy on a whim. In my prior review, I said that the next review in this series would be the Valsione R. That was a lie. Not at the time, but that's how it turned out. I make no apologies.

Just as the Huckebeins are the classic real type robots of the SRW games, the Grungust series has frequently been the weapon of choice for players taking the Super Robot route. Further adding to the broad range of robot aesthetics found within this franchise, the Grungust comes into existence courtesy of legendary mecha designer and founding member of Studio Nue, Kazutaka Miyatake.

The origin of this specific unit, officially known as the Grungust Unit 2 Lion Head Type, is a little strange, as it was a variant designed for the 2006 Super Robot Wars: Divine Wars anime. Appearing as a customized unit for lovelorn Brooklyn "Bullet" Luckfield, it would later make a playable debut in Original Generations for the Playstation 2. The Unit 2 has a red color scheme and a lion design for the head (hence its name), differentiating it from the blue, star-headed Unit 1. Oh, and the Grungust Unit 2 is not the same thing as the Grungust Mark II. I couldn't find any video of the Unit 2, so here's the original Unit 1 in action. It's pretty much the same thing. 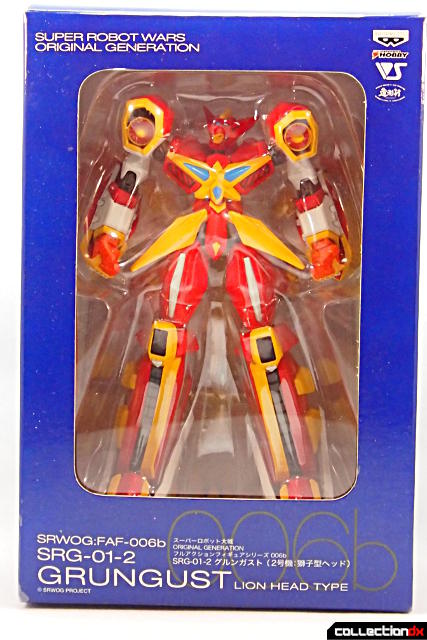 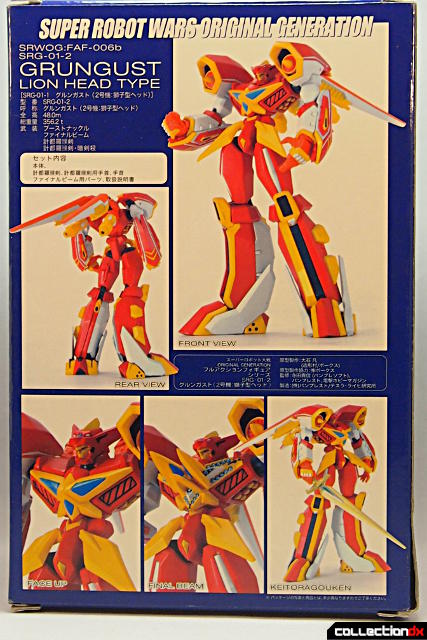 The Lion Head was released through Volks at the same time they re-released the original blue Grungust figure. Like the majority of the reissues, no stand or color booklet is included. 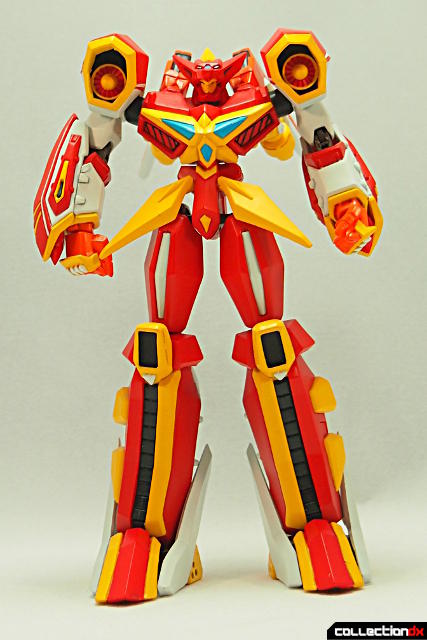 The Grungust's design is...well, it's interesting. The Grungust of the games is a triple-changer, and this comes across in little details such as the turbine engines in the shoulders and tank treads tucked into the shins. I don't have any particularly strong feelings for the unit, and I'm not even sure if I like it or not, but at any rate it's not what I'd consider one of my favorite Miyatake designs. 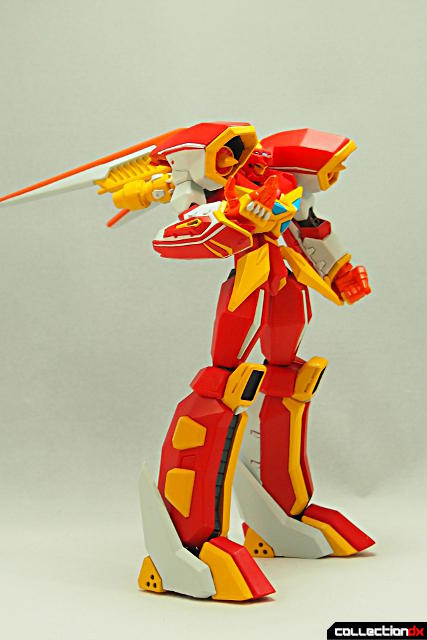 The red, yellow and white paint job is pretty sharp looking. Like most toys from this line, it's by no means great, with the usual amount of smudges, bleeding and nicks, but it looks pretty good from a foot or two away.

Articulation is about the same as always? It's difficult to keep trying to come up with new ways to say that. The range of the elbow joints isn't anything special, but it doesn't have to be as the shoulder turbines prevent any more movement. 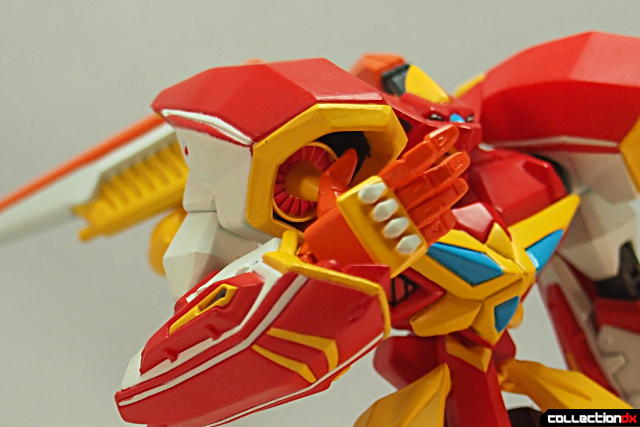 There is a bicep swivel, but no forearm swivel, which really limits what you can do with the arms, especially since there is barely any lateral movement in the shoulders. The turbine housings are also unable to move separately from the arms. The head is on a straight peg, which I really shouldn't be surprised by at this point. 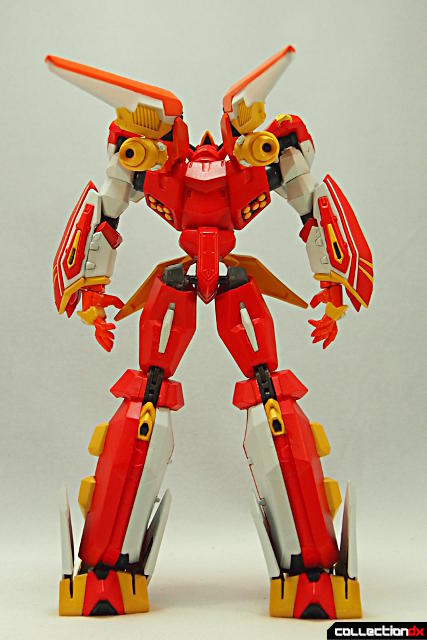 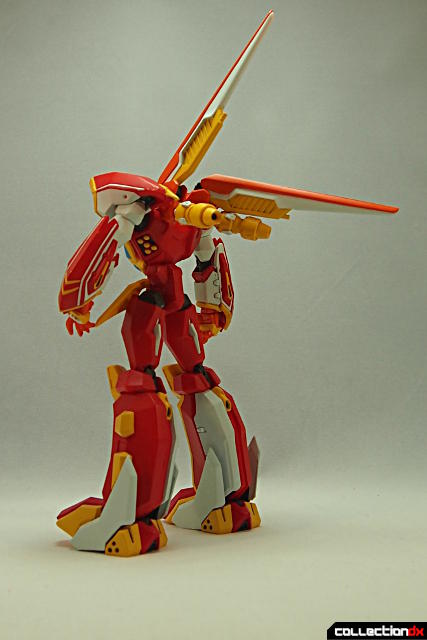 The wings on the back swivel up and down a little, and the boosters underneath move even less. The wings need to be attached out of the box, and it's a little difficult to get them aligned with each other, given that the point of connection is made out of PVC and they don't seat quite straight.

The legs seem to be mostly made up of hollow ABS plastic, so the Grungust's center of gravity isn't quite as low as it might appear. Most of the weight is in the arms and torso, although it still manages to stand well enough. There are no swivel joints on the upper thighs, but the ball joint does allow the legs to pivot a little. The knee joints do what one would expect, and the feet consist of a ball jointed heel and and a ball jointed toe. 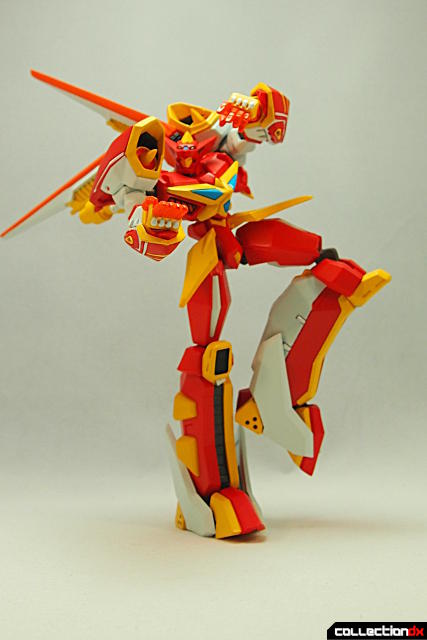 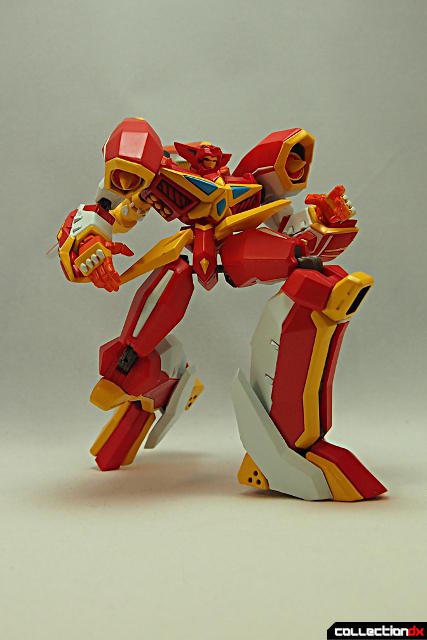 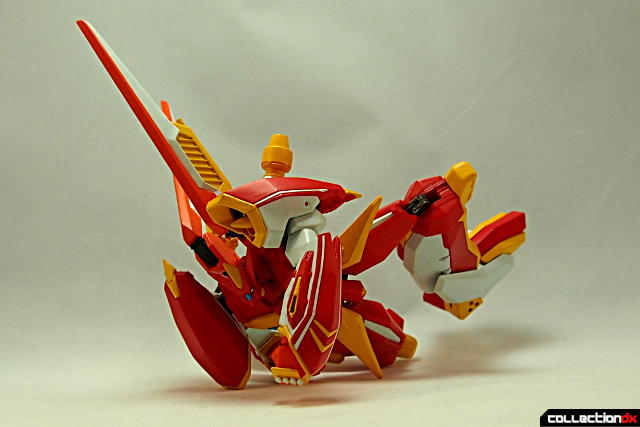 Similar to the Compatible Kaiser the large heel guards are designed to swivel to the side to allow for wide stances but it doesn't quite work because they can't actually swivel very much. 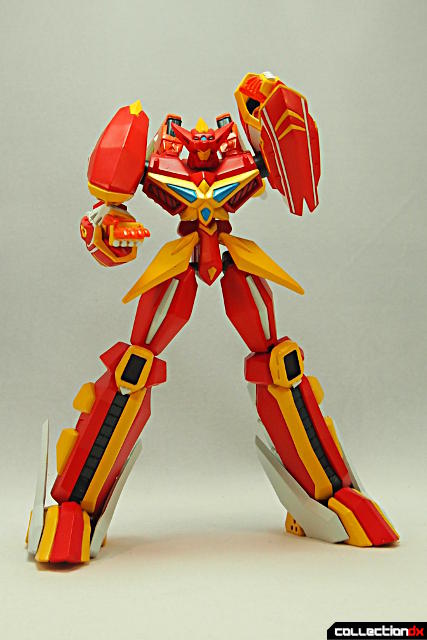 The pieces aren't able to clear the heel, so they don't really move. It doesn't really matter though, because they are made out of fairly thin PVC and just end up bending. It doesn't look that great. Also the left leg on mine keeps falling off? I've tried a couple of different folksy home remedies, but I can't seem to improve it.

The forearms aren't designed to come off, so I can't really demonstrate its rocket punch equivalent, the Boost Knuckle.


Or I couldn't, without the power of technology. 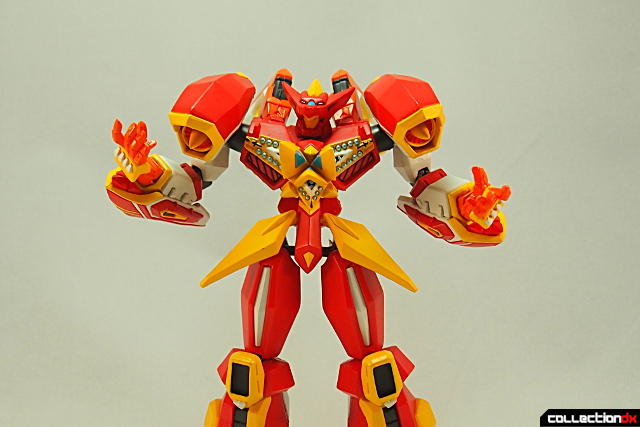 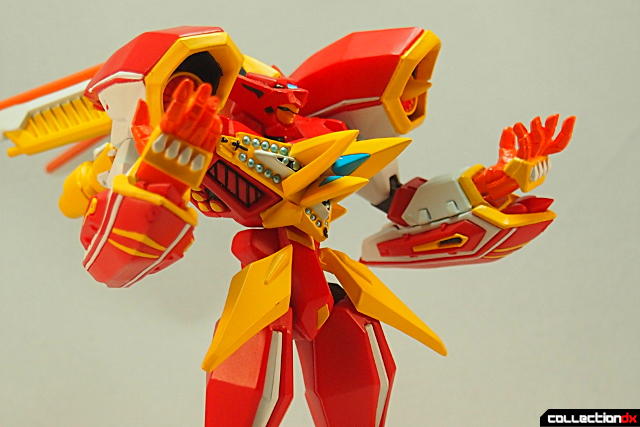 The Final Beam is fired from the Grungust's chest, and thankfully this time it's replicated by switching out a single piece. 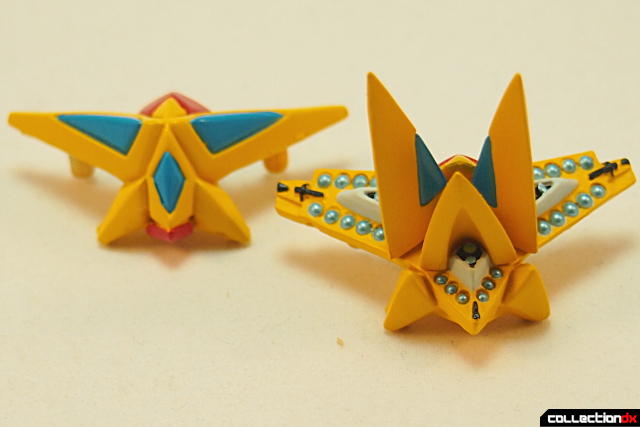 It's worth pointing out that a lot of parts on the Grungust were seized up when I got it, including the bicep swivels, both hands and the waist post. The chest piece was by far the worst of it, although thankfully I was eventually able to get everything unstuck. It's also worth pointing out that two out of the three open fins on the Final Beam piece are glued on crooked. The Final Beam piece was exclusive to the reissue versions. 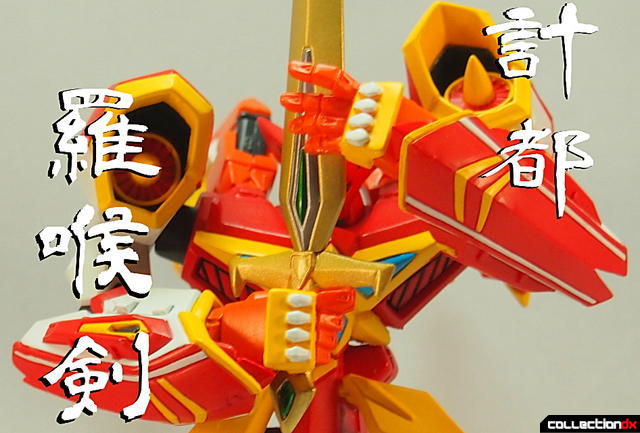 In Heaven there are Two Stars of Calamity...(That is not the line that Bullet uses to introduce this attack but Bullet is kind of a boring person)

Despite having an attack called the 'Final Beam', the Grungust has something else for its finishing move: the Keitoragouken, or Ketu Rahu Sword, with Ketu and Rahu refer to the ascending and descending lunar nodes in Hindu astrology. If you'd like to know more, please go to Wikipedia. 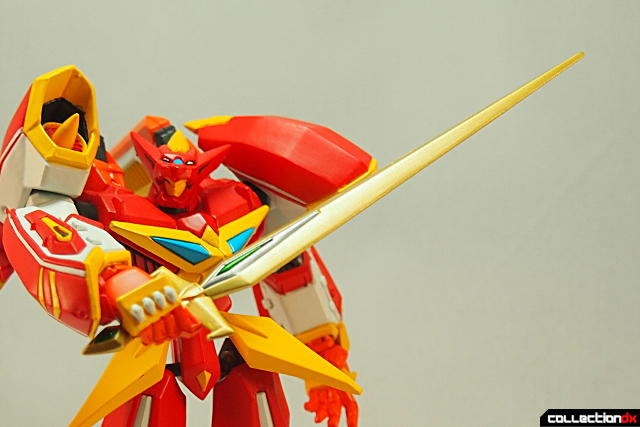 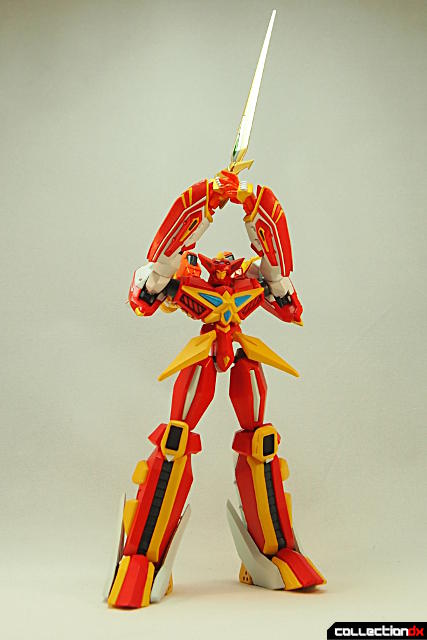 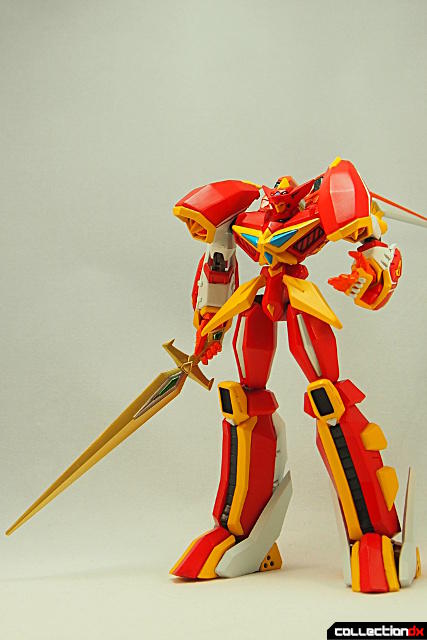 As is standard practice for Volks, the blade swaps between hilts with and without hands permanently attached to it. 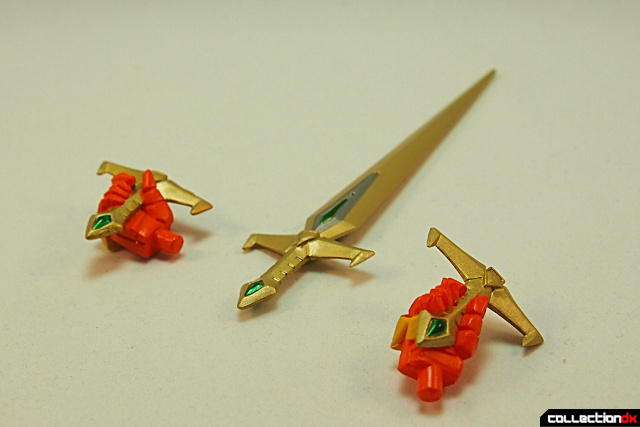 The Grungust thoughtfully comes with two hands-with-hilts, where each grips the hilt slightly differently to allow for more posing options. 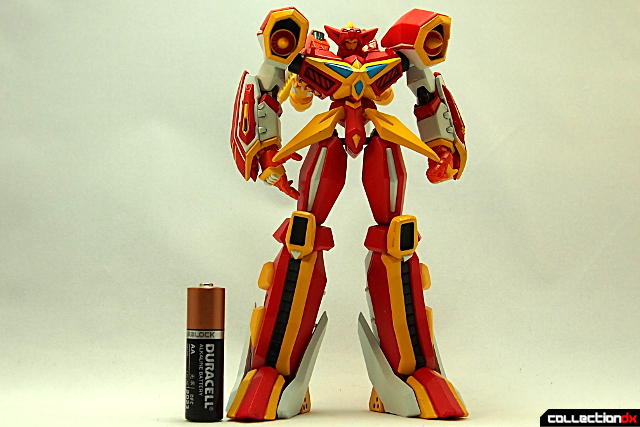 The Grungust stands next to a common household item for no apparent reason
Despite some QC issues, the Grungust is fine. It looks like it should, and it feels about like what you'd expect from a Japanese PVC figure from around the the early aughts (except that the Grungust probably came out around 2006).
Of course, with the amount of stuck parts I initially had this review could have turned out very differently.
I didn't see a whole lot of Grungusts during the time I was actively looking for FAFs, but I'd guess that one shouldn't run more than 50 dollars.

Next time: There is a 50% chance that it will be the Valsione R. 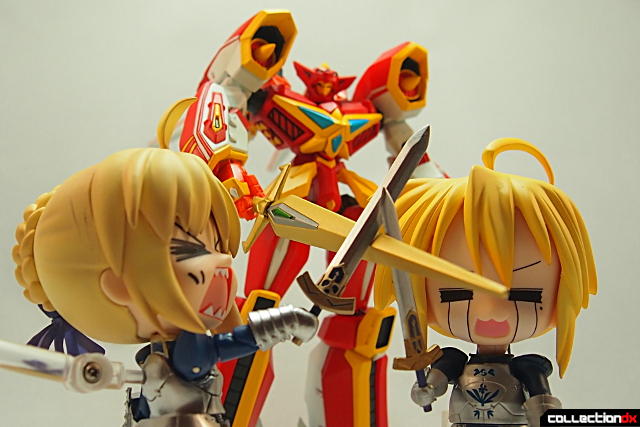 The Oath Sworn in the Peach Garden or: There Can't Always be a Punchline

......I actually kinda want a Grungust now. At least it comes with a clean sword handle with no hand attached.