“What is it?”
“I’m not sure, but it’s heavily armed. If the robots build this, the mountain will be theirs.”

During a raid on a downed enemy Fire Vulture Battle Machine, Exo-Force was able to obtain information on a new robot project. Though there was little hard data, the new weapon platform appeared to be huge. It was not until mere days later that the full extent of the robots’ devious ingenuity was uncovered... and began walking across the Tenchi Bridge. The Striking Venom is the largest Battle Machine ever made to date. Standing far taller than even their own Thunder Furies and Fire Vultures, it walks on four stilt-like legs, each ending in a wide clawed foot. When it moves into position, the Striking Venom quickly digs a large hole for itself with its shovel-like feet and hides in ambush for unawares Exo-Force vehicles & Battle Machines. A dark machine highlighted in venomous green, it is a mobile command center as well- with two brown Iron Drones having been permanently hardwired to its computer systems, and a dismembered silver Devastator mounted directly into a turret above the central body. The Devastator- also plugged into its own exclusive combat computer- controls two rotating 6-barrel heavy laser cannons like an alternate pair of arms, and a new disc launcher modified from the prototype demolition tool that was left unfinished from before the war. In addition to the turret above, the Striking Venom also has two forward-mounted paired laser cannon turrets on the central body, and another pair of rapid-fire pulse laser cannons mounted like tusks on either side of its head. Between and below the glowing red sensor eyes on its head is also a short-to-medium machine cannon for close-in devastation. No less than four additional Iron Drones armed with hand-held pulse laser rifles always accompany the Striking Venom wherever it goes because they patiently await combat on built-in recharge plugs on each leg. When released from the swing-down alcoves in the legs, they act as a close-range anti-human & infiltration squadron, or as an organized point-defense system controlled directly by the network organization of seven robot AIs and the Striking Venom’s own combat computers. The inhuman efficiency and blatant disregard for their own kind in its construction and design is not to be believed as this massive spider-like Battle Machine heavily stalks across Tenchi Bridge; the robots have put all that they have learned about war into the Striking Venom. Shortly after it appeared on the battlefield for the first time, Exo-Force was horrified and amazed to see the leader of the robot army was personally piloting the Striking Venom; the original robot which malfunctioned and began the rebellion- the golden Meca One. 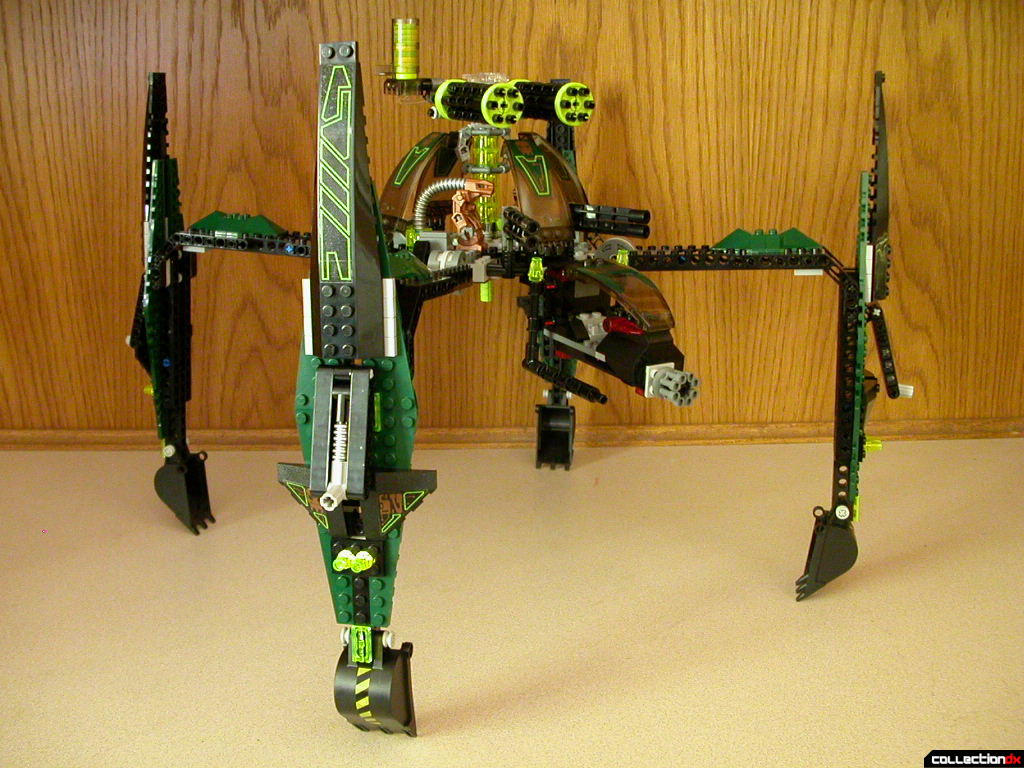 For the roughly two hours it took to assemble Set #7707, all I could say was “How --[censored]-- cool is this thing!?” Initially seen as an obscure soft blue holographic outline in a computer-generated TV promo episode, the Striking Venom (back) has four large- no, huge- 12 ¾” tall legs, each of which can independently rotate on four paired hip joints (eight altogether for the set) at the central body. These are the same joints found on the new “Exo-Force” Mobile Defense Tank, and snap tightly every few degrees. The head for the Striking Venom is fairly simple in construction, but looks fearsome nonetheless and can snap up and down at various angles at the neck. The two transparent red eyes are the same as the ones initially used by the swarming insect-like Bohrok sets (#8560-8565) from the second year of “Bionicle”. The gold Meca One doesn’t sit in the cockpit; rather it has no legs included and snaps into its ‘seat’ via a pair of clips at its hips. The central body has four tinted transparent shields that can fold down to reveal the interior. A pair of Iron Drones has flexible silver Technic tubes running between the back of their heads and transparent green cylindrical bricks; the normal red #2 rods for eyes being replaced with blue connection pegs needed. The weapons turret is built around the body of a plain silver Devastator with no arms, legs, or typical red Technic #2 rod. Like the cockpit, the Devastator’s body is connected to a pair of clips, and then the turret pivots up and down at the robot’s ‘hips’. Again, like the MDT, the Striking Venom uses the same type of cannon barrel design, though with a few additional parts for a slightly different look. Additionally, a newly-designed single piece disc launcher is attached on the right side of the turret, and can hold up to ten discs at once. As a bonus feature, a shaft runs through the center body, and can be seen underneath. With this, the entire turret assembly can free rotate side-to-side 360°. Each of the four legs can hold a single Iron Drone on a multi-jointed recharge plug that holds them firmly in place from the backs of their heads. The robots can either be left up for recharging/point-defense, or be swung down and detached. And finally, each leg also had a bucket-like scoop with a very limited range free-rotate joint; these parts typically being found on other LEGO construction vehicle sets. 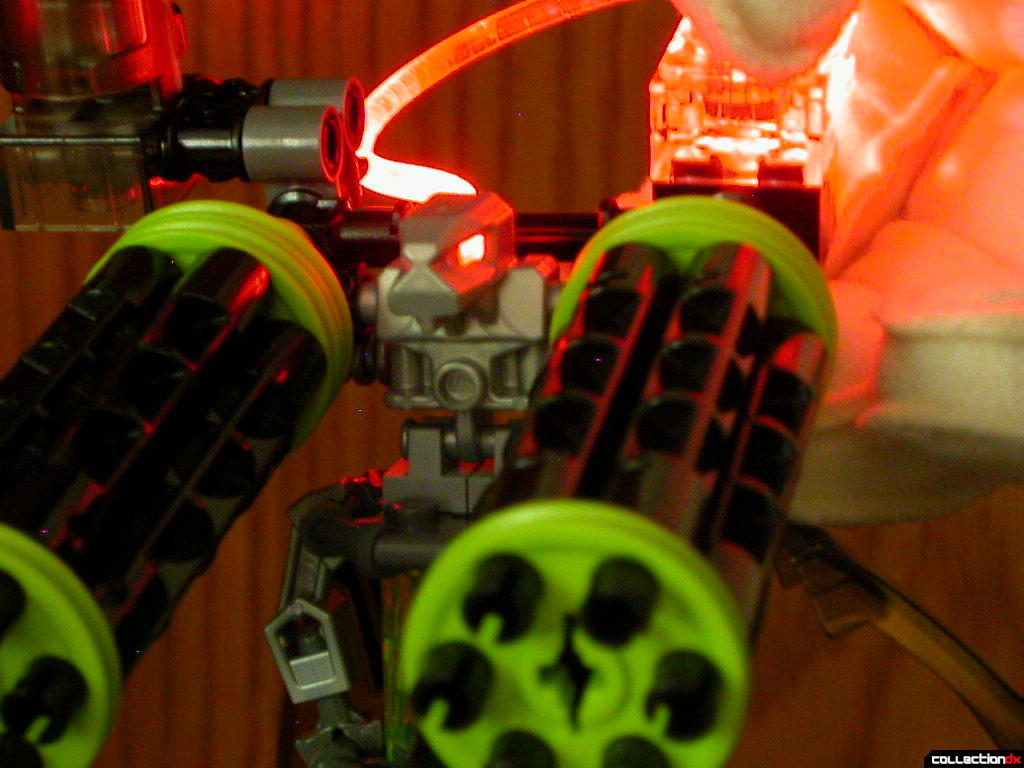 In addition to being large and poseable, the Striking Venom is one of the “Exo-Force” sets that use the newly-developed Lego light brick- a transparent 2 x 4 brick that has a small red light emitting diode (LED), a small, enclosed, self-contained battery, and a small trigger blended into the top. While the light brick can be snapped onto things, it has no studs of its own so nothing can be snapped on top of it or else the trigger couldn’t be accessed. The light brick on the Striking Venom set is activated when the trigger is pressed on the light brick itself by hand. This activates the brick’s battery & LED. When this happens: 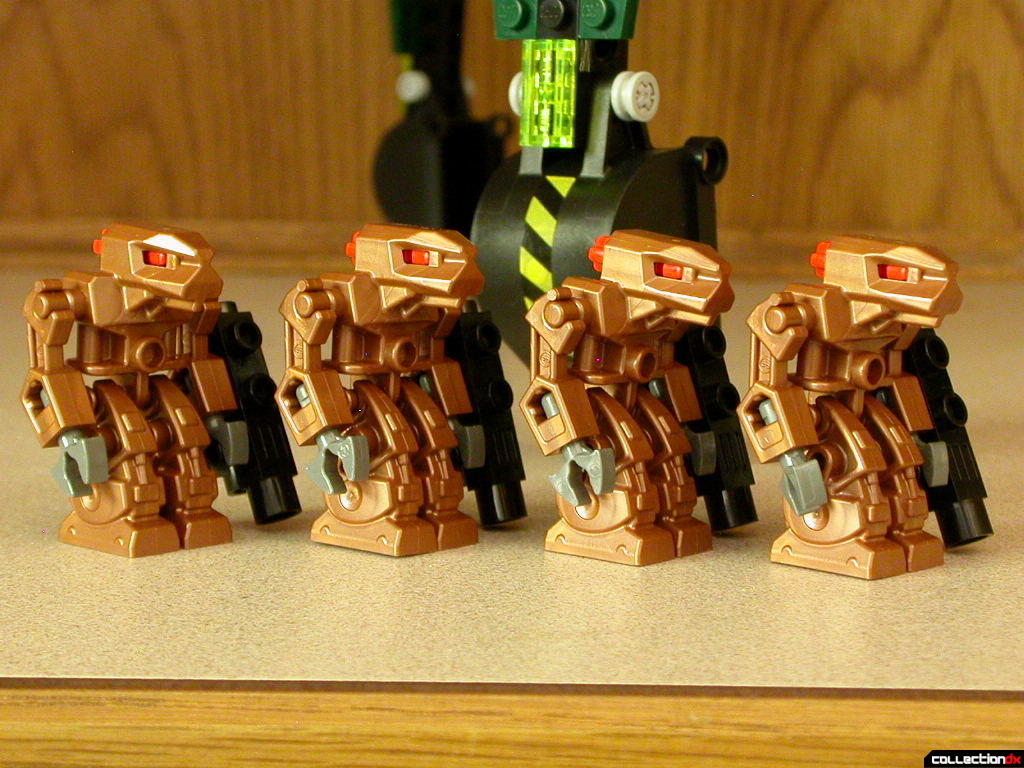 Lego Set #7707 comes with six brown Iron Drone robot minifigs. For the eyes of four of them, a red #2 Technic bar is slid in through the back of the head. The head/body and arms for Meca One are molded in a gold ABS with black coloring swirled in; similar to the appearance of a typical Devastator minifig. No legs are provided for the leader of the robot army in this set; thus it is pretty much restricted to the head of the Striking Venom. A plain silver Devastator minifig head/body with no swirled transparent coloring is also provided, but it cannot really be accessed once it’s in place in the center of the turret. The hand claws can all rotate at the wrist, and need to be attached. Unlike most sets that have robot minifigs, this one has four black ‘rifles’ that can be gripped by the claws of the four complete Iron Drones. (Personally, I place the rifles in the left claws to make them seem more ambidextrous and non-human.) 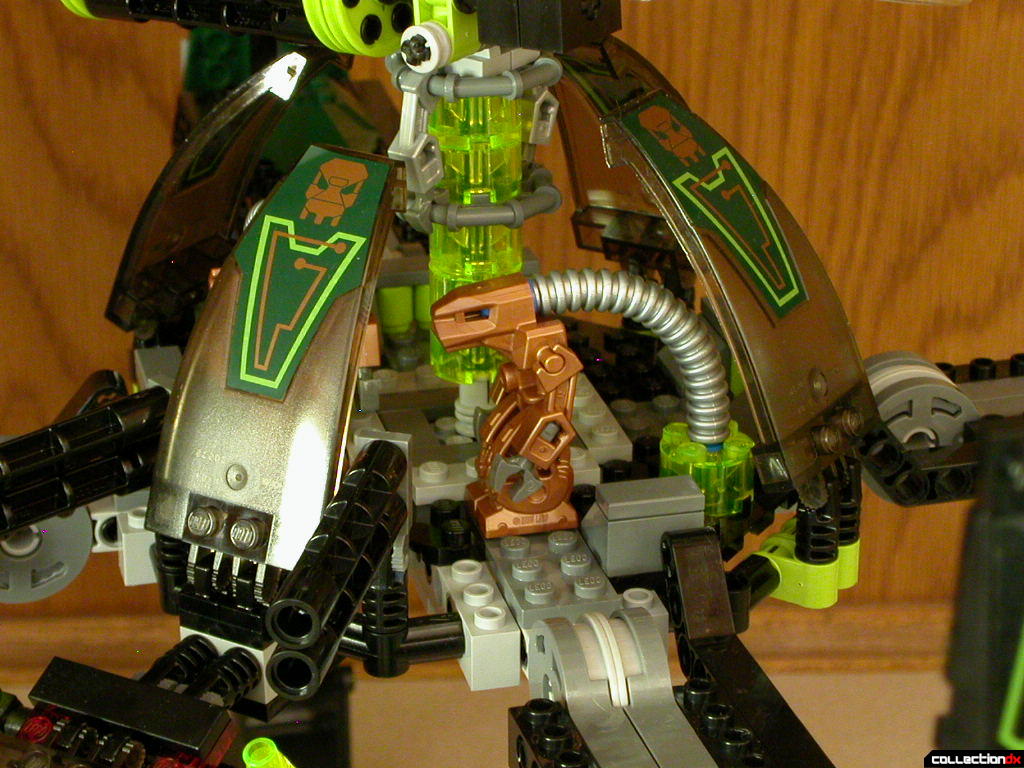 Normally, when a Lego set needs specific details on a part, such as a control panel or flag, the image is printed or painted directly onto specific parts. However, the “Exo-Force” line breaks that mold by using stick-on decals; something that was rarely ever used in the past. There is a small sticker sheet which provides allegiance markings, warning symbols & notices, and names- some of them written in Japanese text! Unlike the human Exo-Force Battle Machines, the robot’s Battle Machines do not have human language markings on them. But, this still serves to allow for a wider range of piece marking without Lego having to create a completely different piece each time, and merges the “Exo-Force” and Japanese toy influence closer together. It does, however, have a small downside- because of the design of the decals, some of them cover places where other Lego pieces can go, which limits how a decal-applied piece can be used or taken apart. This covered-hole thing is not an issue with Set#7707.

In addition to building the standard Battle Machine, the official Lego “Exo-Force” website (http://exoforce.lego.com/default.aspx) shows how many of the same pieces can be rearranged into an alternate immobile Frontline Barricade with two spotlight towers, a long cannon turret and disc launcher/cannon turret, and a storage rack for four Iron Drones; found in the Online Building section of the site, and pictured on the back of the set’s box. (I haven’t built it myself yet, so I can’t give details on the alternate model.) So far, there is no indication that it will be able to officially merge with another set, but I’m sure MOC-ists [My Own Creation] won’t let that stop them from trying.

Okay, there’s all the praise and all the info. Here’s a few, mmm- suggestions: 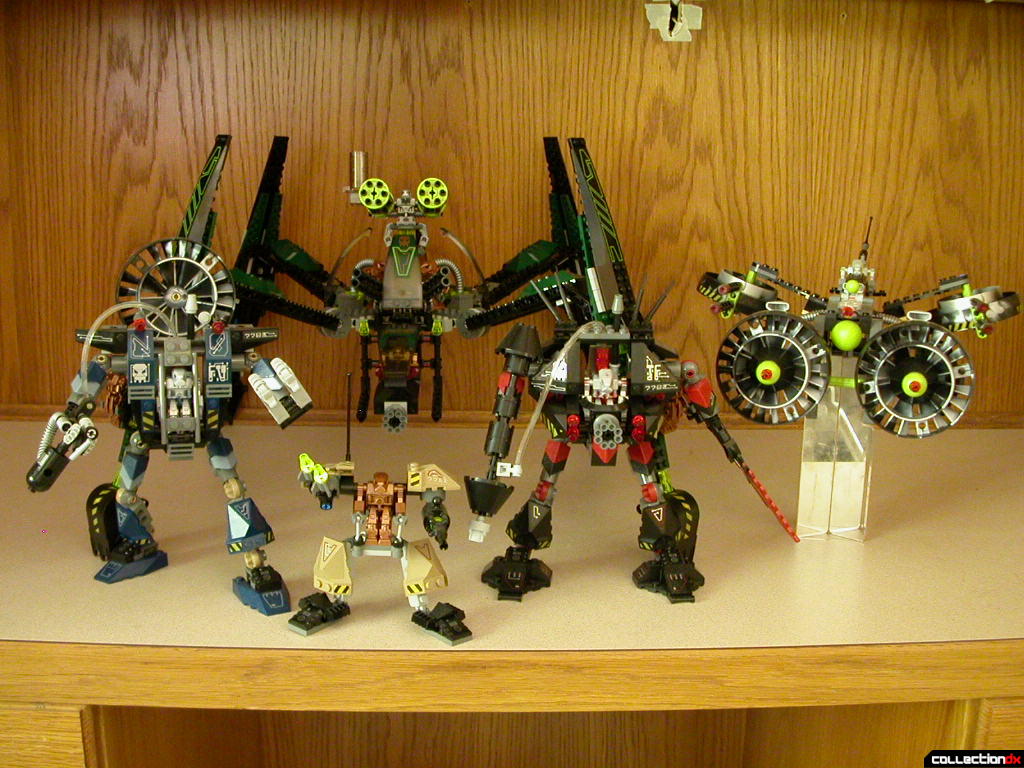 Needless to say, this thing is huge compared to the robots’ other Thunder Fury, Fire Vulture, and Sentry sets- nearly 16” wide/long, and just over 12” tall to the top of the pointed knees. (It’s so large that I couldn’t photograph it on the same shelf I usually use!) My hat’s off to your design team, Lego; this thing has good functions, and looks very, very cool and creepy at the same time. Typically, such detailed or large Lego sets are in the $60+ range, but they kept the price down at $49.99 without sacrificing anything too severe; my complaints above are more like things that could have been done in addition to what’s already there. (Well, except maybe that new poorly-designed disc launcher...) This is a little more of a display-only set though, and isn’t meant to be banged around as much as the others could, so I would advise caution and say it’s more of a collector’s piece. Well done, Lego! Very well done indeed! I give my highest recommendations for the Striking Venom! (If you can spare the shelf space, that is...) 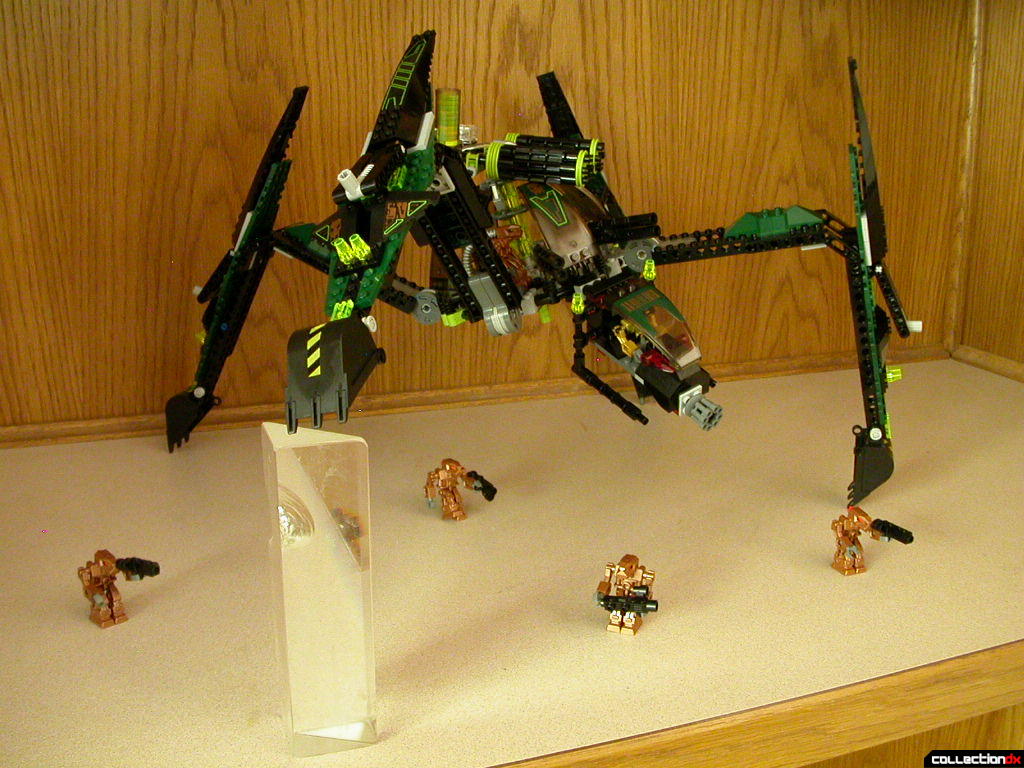 Use the online Table styler for creating grid layout on websites because the traditional HTML tables are outdated and not responsive.