The Autobots being primarily a group of robots who turn into cars and trucks sometimes need help from some high-flying, heavy lifting comrades. Stratosphere fulfills this task with gusto. 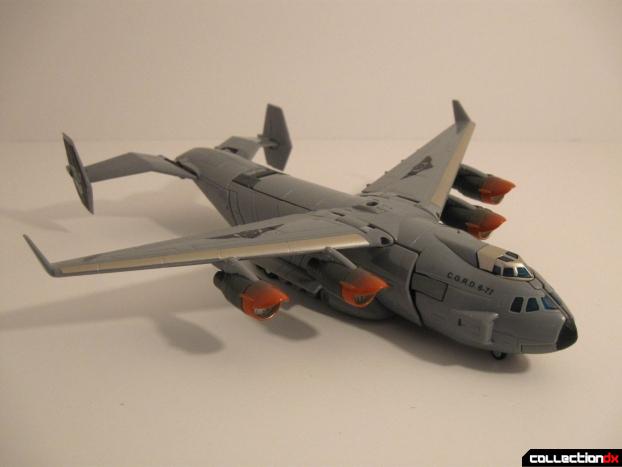 Stratosphere starts off as a military transport plane. His exact design is an amalgamation of several different real life planes include the C-17, C-5, and An-225. He's actually quite convincing in this mode.

Stratosphere rests on 11 landing wheels (although only 3 are actually functional) and features a smattering of typical military aircraft markings as well as many Autobot symbols. 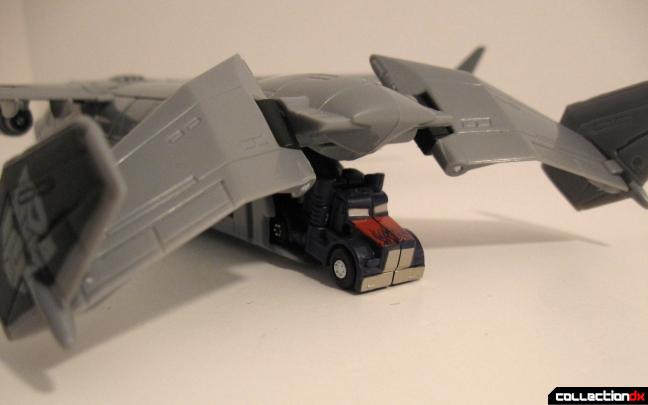 Stratosphere's main gimmick is a spring loaded cargo bay where he can store the miniature Optimus Prime. Simply rotate the tailfin assembly downward to open the bay. 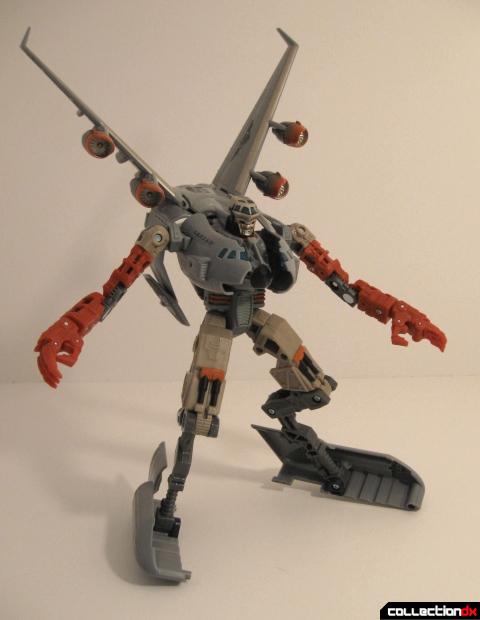 In robot mode, Stratosphere uses all his hidden bulk to expand into a really intimidating robots. Despite the odd choice of orange for his arms, Stratosphere manages to invoke images of a gaunt, giant of a machine. 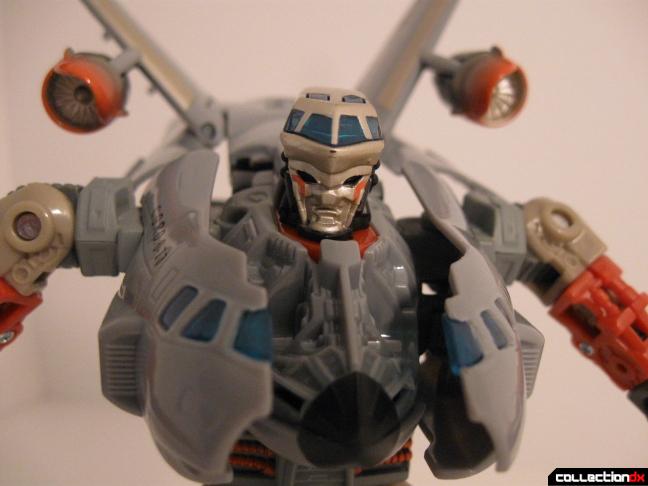 There's something very traditional about Stratosphere's head design. The combination of canopy windows on his head and the small markings around his eyes give him the visage of a strong soldier. 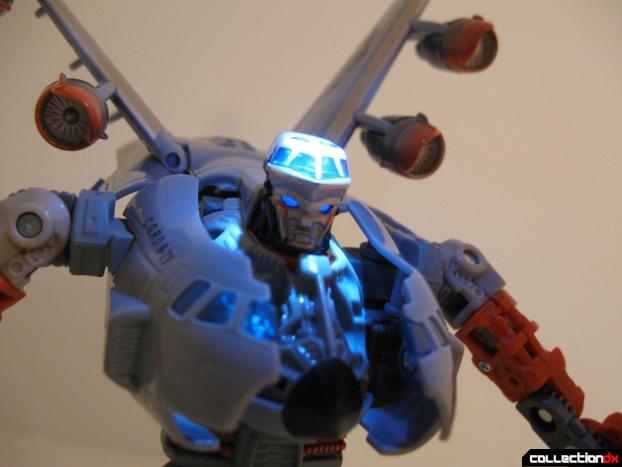 The light piping gimmick works really well with this toy. 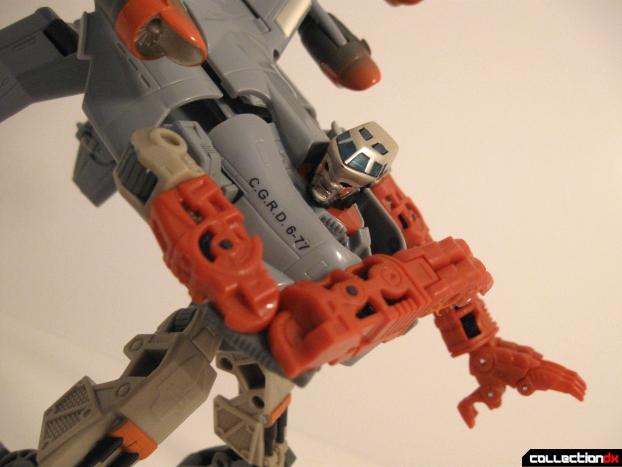 Stratosphere features plenty of articulation in his arms, legs, head, and hips. His arms feature small gears that move as you position the arms. His claws are articulated and can hold things pretty well. 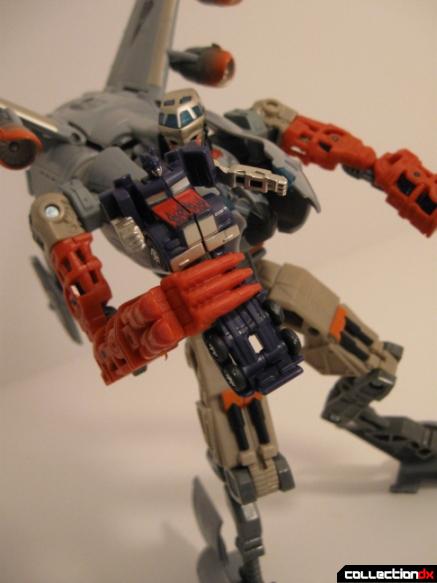 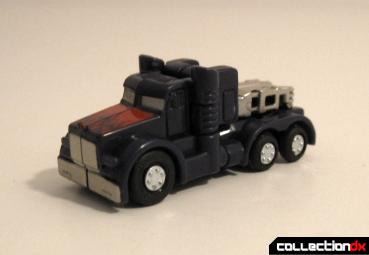 The miniature Optimus Prime is a grat accessory in its own right. For me, this guy is like a new version of Micromaster Overload which was one of my favorite toys. 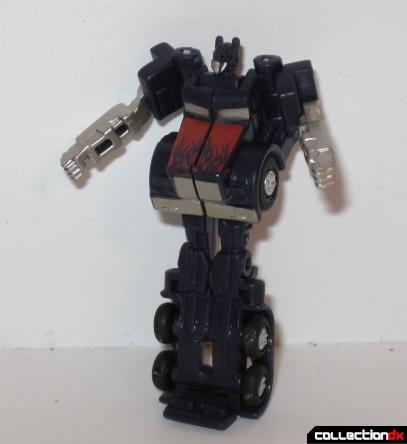 In robot mode the Micromaster aesthetic is in full effect. He really feels like a toy right out of my youth.

Overall, Stratosphere is a great toy. From a solid jet mode to a strong robot mode you really can't go wrong with this one.

My only problem with this otherwise excellent toy is the way the feet and lower legs were designed. It's like they got to his knees and went to lunch, then someone took the design thinking they were done.

I don't see why they couldn't have made it so they folded or collapsed in some way to make the feet shorter and the lower legs more substantial. Their current form just looks goofy and befits something that you would see on a much smaller toy with limited articulation.

Stratosphere's vehicle form is the plane in the first scene in the movie. where Optimus prime the great and brave leader, jumps from the plane.

Except that it's not.

The plane shown above is a mishmash of different types of planes, and therefor could not possibly have been in the movie. They specifically use C-17s in the movie, as there is no reason to introduce a new type of Earthly aircraft to transport around alien robots at this time. It would have been a waste of resources for the movie's production; better to recreate the C-17s that the military provided than make a brand-new design.
------------------------------
CollectionDX Staff

Well, this is the result of not having the toy license for this airplane ; whether that's a positive thing or a negative thing for the individual TF fan.

Personally, I'm OK with Hasbro taking some design liberties of an altmode, as long as it evokes some sense of realistic style to me.

Tacked on over-the-top tech details will usually kill it for me. So, this Stratosphere looks decent to me. I do wish though they'd done something about those ski slats ; a few more hinge joints would have probably made some pretty well developed lower legs & feet.