This shouldn’t come as a surprise to CollectionDX readers, but it is an amazing time to be a Star Wars fan.  Obviously, everyone is excited for the new films to start coming out, but things have been great for Star Wars toy collectors for a while now.  When Disney took over the franchise, they started opening up the licensing much more than had previously been seen.  For years, Hasbro was pretty much the only game in town for Star Wars action figures, but now we are spoilt for choice.  It seems like everybody can make Star Wars toys now, and that includes Japanese companies like Bandai, Takara, and Medicom. 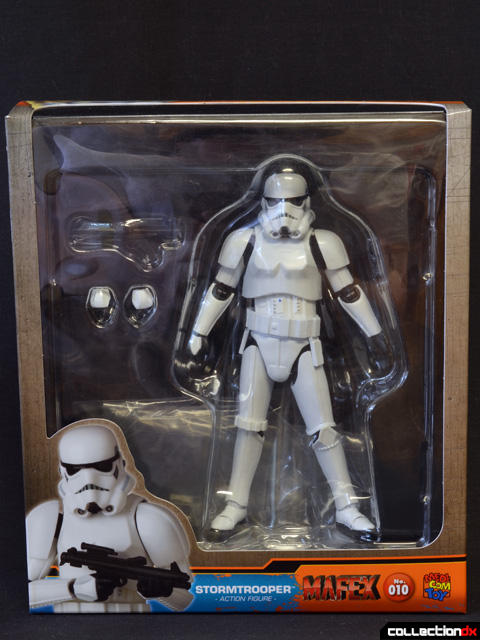 Medicom’s Miracle Action Figure EX line is a relatively new 6” scale line for licensed properties.  Medicom has used the Miracle Action Figure name before, and debuted the EX line with some movie Batman releases a couple of years ago.  I had not really paid attention to the line, but Medicom started showing off their MAFEX Star Wars releases, I was curious.  I already owned a couple different 6” scale Stormtrooper figures, so I thought it would be fun to add one more and see how it stacks up. 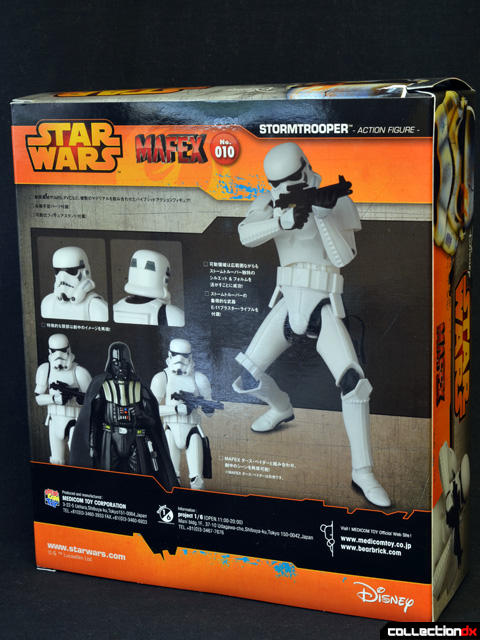 The box for this guy is a little weird.  It features the orange color scheme and logo used on the current Hasbro toys, but I most associate that deco with the Star Wars: Rebels toys, where it debuted.  It’s a sharp look, regardless, but I couldn’t help expecting an animated style trooper when I saw the box. 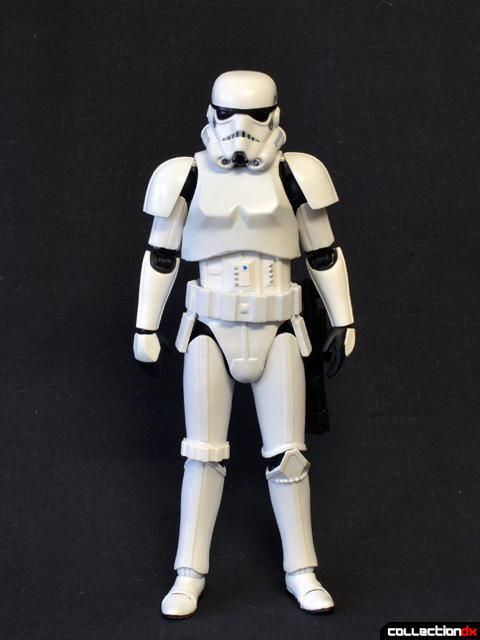 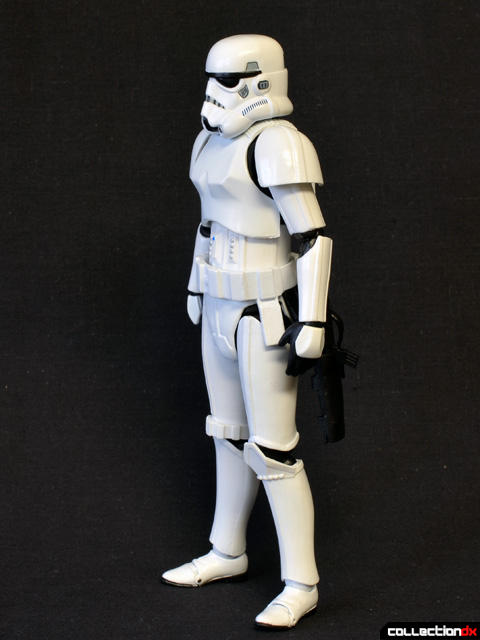 Out of the box, Medicom’s MAFEX Stormtrooper stands just over six inches tall and seems to be made entirely of PVC, with some parts molded in a softer material than others.  Specifically, the shoulder and chest armor are made from thin, soft PVC for flexibility when posing.  The molding is alright, but nothing about the detail feels sharp, as is typical with PVC figures.  The armor is fully painted in white, with a satin finish.  The included accessories are two sets of hands (open and gripping), an E-11 Blaster Rifle, and a display stand. 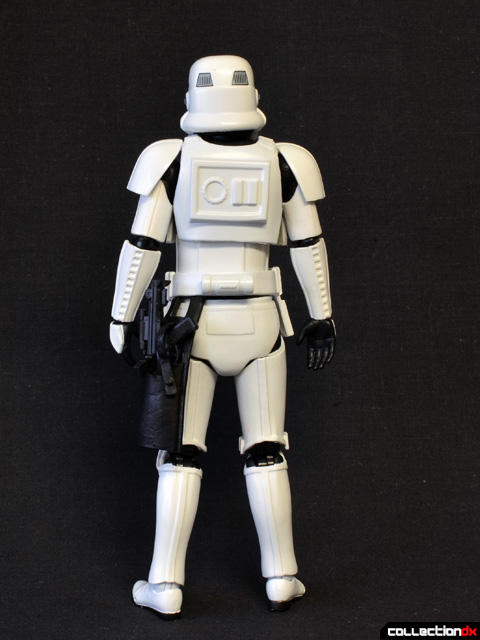 The toy has holster for the E-11 Blaster Rifle molded as part of the belt.  The belt is a separate part molded in soft PVC, and the holster features a working strap.  When I was unpacking the figure, the thermal detonator came unglued from the belt, so I had to stick it back on with a little super glue. 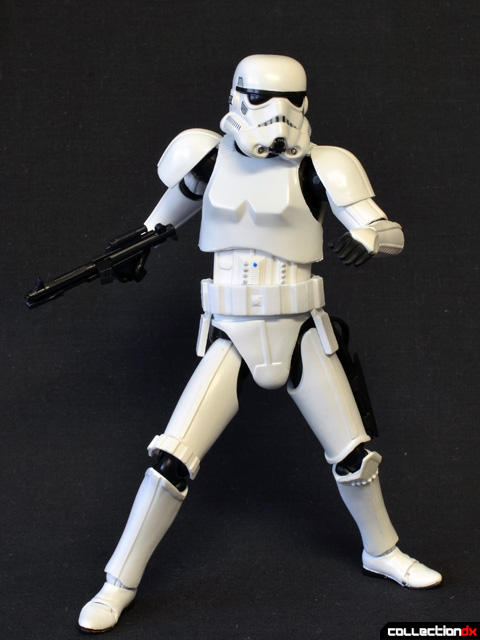 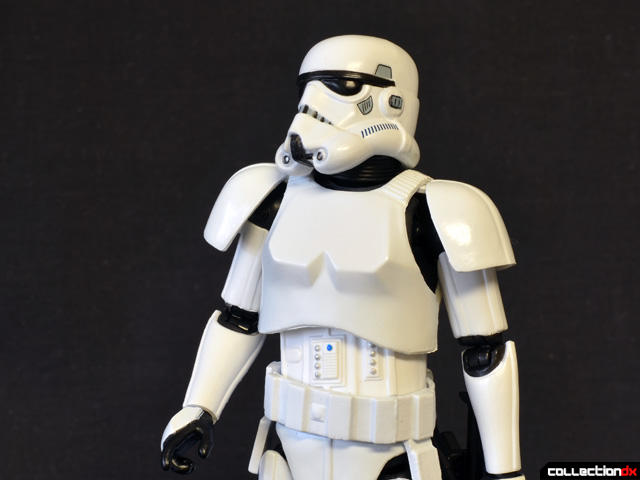 Articulation is very good in most spots.  All of the joints are smooth and tight, but not overly so.  The hips can pull down a little for additional clearance.  One thing that is immediately apparent is how the shoulder armor gets when posing the arms.  Because the shoulder armor is attached to the torso with a thin bit of PVC, it does not move very naturally with the shoulders.  It doesn’t look too bad in most poses, but I worry about the long-term durability of this part.  On the real costume, the shoulder armor was attached to the torso armor with a strap in the same way, but there was also a strap that fastened the armor to the wearer’s bicep so it was more form-fitting. 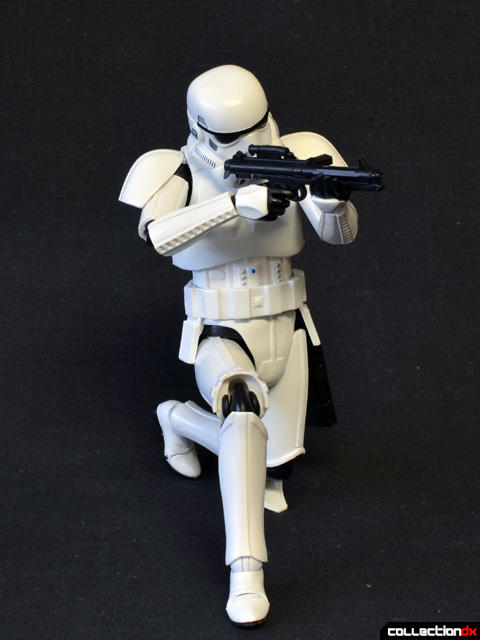 Thanks to the well-designed hips and ample torso articulation, Medicom’s Stormtrooper can do a great kneeling pose. 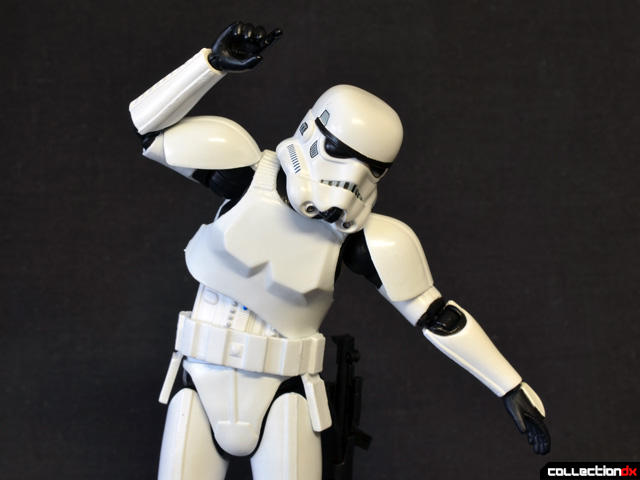 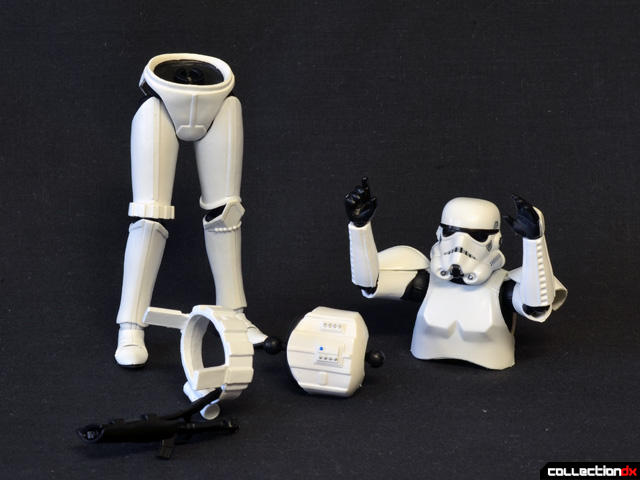 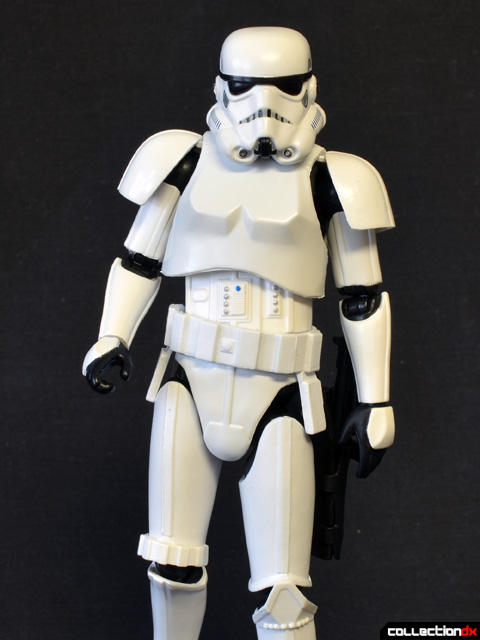 The torso articulation is probably my least favorite part of the figure.  The torso has two double-ball joints, providing for a very wide range of motion.  This also means that it can be difficult to get the torso into a natural, straight pose.  It takes a lot of fiddling to get the Trooper’s spine aligned correctly, and the torso has a tendency to come apart while getting things just right.  It’s not a major problem, but it does make the figure feel a little less solid. 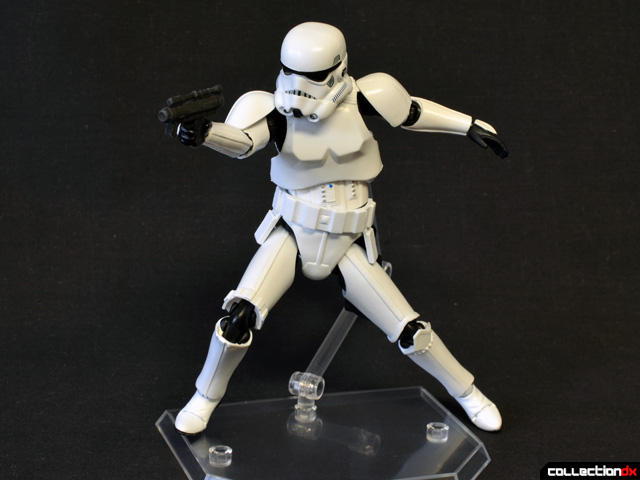 A display stand is included, but it’s not great.  It features a claw grip to go around the waist, but it’s not a great fit.  The toy has pretty good balance, so the stand doesn’t feel critical, anyway. 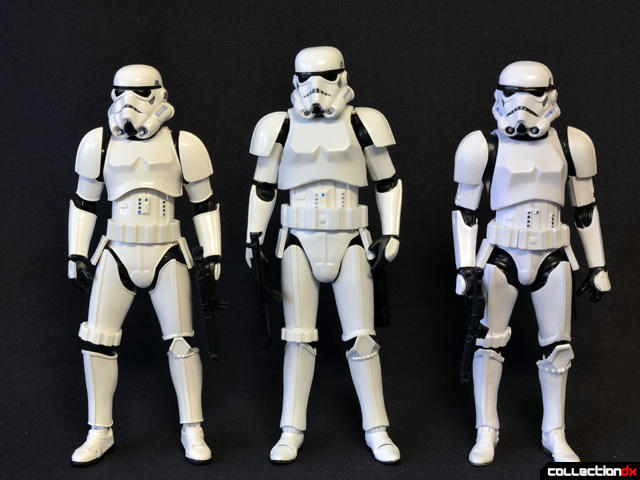 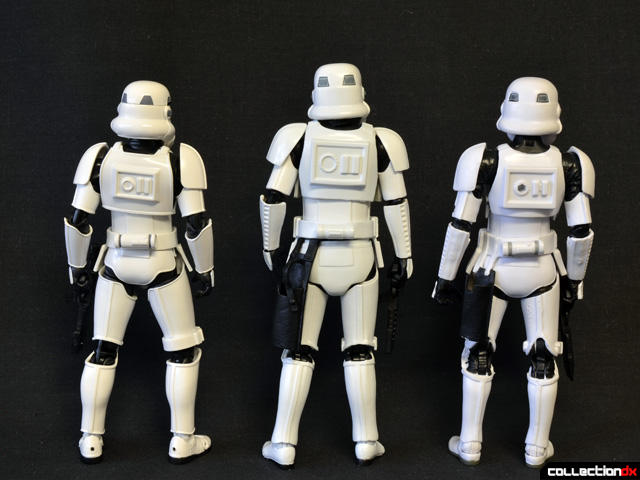 My biggest reason for wanting to check out Medicom’s MAFEX Stormtrooper was so I could compare it to other six-inch Stormtrooper offerings on the market.  Here’s Medicom’s Trooper in the center, flanked by Bandai’s SH Figuarts Stormtrooper on the left, and Hasbro’s Star Wars Black Stormtrooper on the right.  The differences in each manufacturers’ proportions and details are immediately apparent.  I actually really like the shape of Medicom’s figure, but the top of the helmet appears to be too squared off.  Bandai’s Figuarts version has the best fit and finish by far, but it’s a little lean, like most Figuarts renditions.  Hasbro’s SWB version really doesn’t look the part next to the two Japanese offerings, but it also cost half as much.  Putting the SWB Trooper alongside the other two really makes clear how off the helmet sculpt is.  Paint-wise, both Japanese figures feature painted armor, while the SWB figure is molded in white.  Bandai’s figure has the glossiest finish, which I prefer. 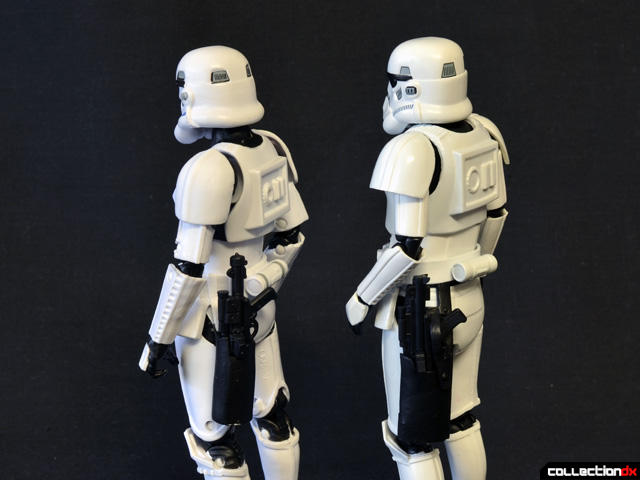 Here’s a comparison of the holsters on the Medicom and Hasbro figures.  The Bandai figure does not have a holster.  Both holsters can fit their blaster rifles, but Medicom’s is a bit larger and features a working strap. 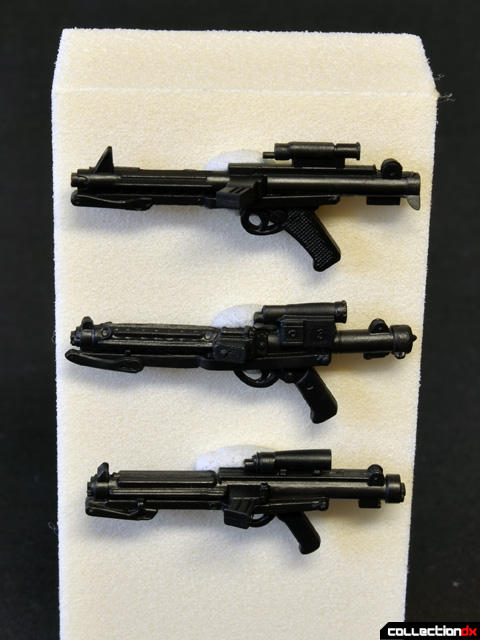 Comparing the E-11 included with each figure is also interesting.  From top to bottom, they are: Medicom, Hasbro, and Bandai.  There’s some significant differences in proportions and details between them.  To my eye, Bandai’s is the most accurate, especially around the front sight and the scope.  The Hasbro blaster is molded in the softest plastic of the three and ends up warped by the packaging. 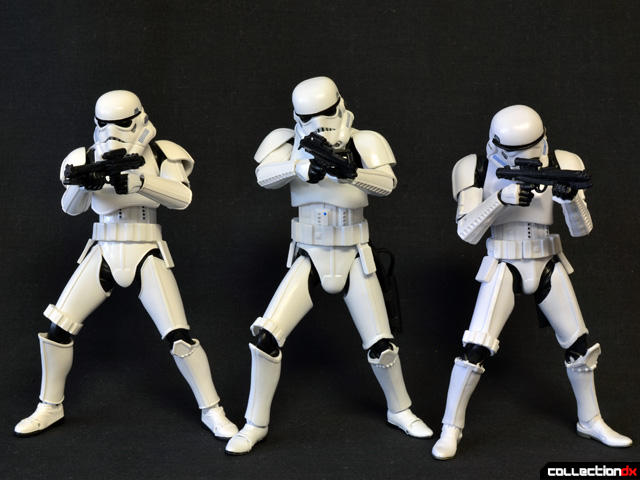 Articulation-wise, both Medicom and Bandai’s figures are better than Hasbro’s.  All three can do solid aiming-down-sights poses, but Hasbro’s is a little stiff due to the wrist hinges and the detented joints that the other two lack. 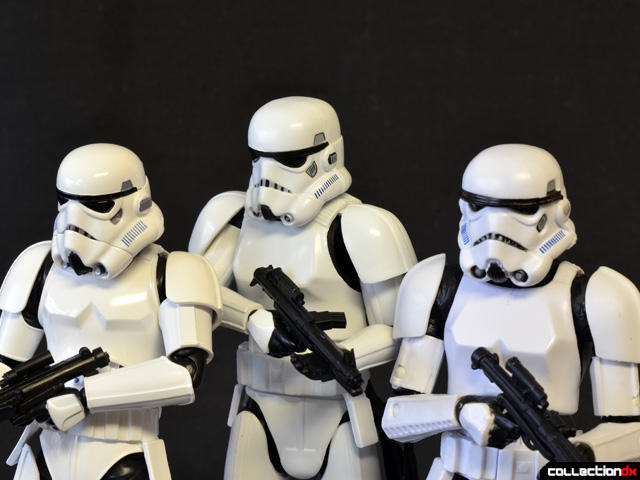 Seriously, what is up with the SWB helmet?  The eyes are a mess and the black brow piping is wrong. 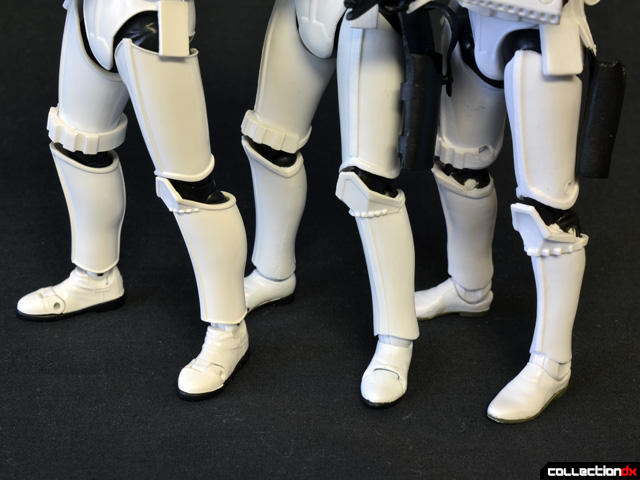 Looking at the knee armor tells a lot about the approach to details among the three figures.  From right to left, that’s Bandai, Medicom, Hasbro, with the detail getting chunkier as you go. 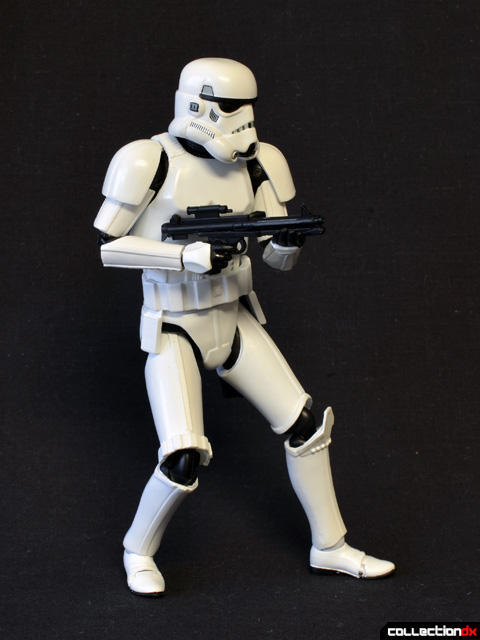 I really like Medicom’s MAFEX Stormtrooper.  The Bandai SH Figuarts version is my favorite of the three, but it can be tough to find and expensive.  The MAFEX version is cheaper, but does not feel like an also-ran.  Medicom’s figure does not have the sharpest detail or the best engineering, but it still looks good and has great articulation.  I wish the torso was a little better and the paint was glossier, but it’s still a solid effort.  The MAFEX Stormtrooper costs more than twice what the Hasbro SWB version does, so if you want to army build it may not be your best option.  If you’re just looking for one or two nice Stormtroopers for your Imperial ranks, Medicom’s version feels like a much more premium product for your extra money, but the SH Figuarts version is top if you can find it.

4 comments posted
If you have the time and

If you have the time and ability to get one, I suggest the Bandai Stormtrooper model kit. It is incredible. The sculpt looks the best out of those for, the plastic is glossy, it's perfectly in scale with the Star Wars Black figures and it does one thing that none of those figures do, gets the green eye lenses right. The only place where there is a noticeable seam line (e.g. you're looking at a model kit and not an action figure) is the back of the helmet.

I have meant to pick one up, but every photo I've seen of the built kit makes it look like the neck is way too short. Still, they are cheap enough that I should grab one. The glossy armor sounds great.

Ill second the model kit. Its got fantastic articulation and if you have gunpla skills you can mod the neck to be a little longer.

I will say that the helmet sits right on top of the shoulders, but there's plenty room to move it back and forth and side to side. I don't think some people realize how large those helmets are in proportion to the rest of the body. For most troopers, there isn't a lot of clearance between the bottom of the helmet and the top of the shoulder/chest armor. Check out the two short guys on the front row and all the guys in the back row. I've just put all of these guys up against screenshots, and the Bandai kit nails the look the best IMO.