Transformers Age of Extinction had a very small number of major villains, that number being only 3. Lockdown and Galvatron both got their own figures in the main line, and although the third, Stinger, had plenty of merchandise built around him, his only proper action figure came as a repaint of Bumblebee in the Japanese only Transformers Movie Advanced line. Despite the fact that that Stinger figure is pretty good in its own right, he is just a straight repaint of Bumblebee, meaning that his robot mode is movie accurate, but the vehicle mode isn’t at all. Now it is four years later, and surprisingly a new Stinger toy has been released featuring an all-new mold as part of the Studio Series line.

In vehicle mode, Stinger is a very sleek and well proportioned Pagani Huayra that, while small, is very well detailed. I think this vehicle mode looks absolutely amazing, but honestly, the red is just too bright for my tastes. In the film, Stinger is more of a dark red, while this Studio Series one is very bright and vibrant. Granted, it still looks really good, but it’s just not completely accurate in that respect. Also, Stinger’s saw blades can store in this mode. Two of them store on the underside, while the other two stick out a little bit on the sides which is a little irritating. Otherwise, I’m very glad you can actually store the accessories because these little saw blades could be easy to lose track of! 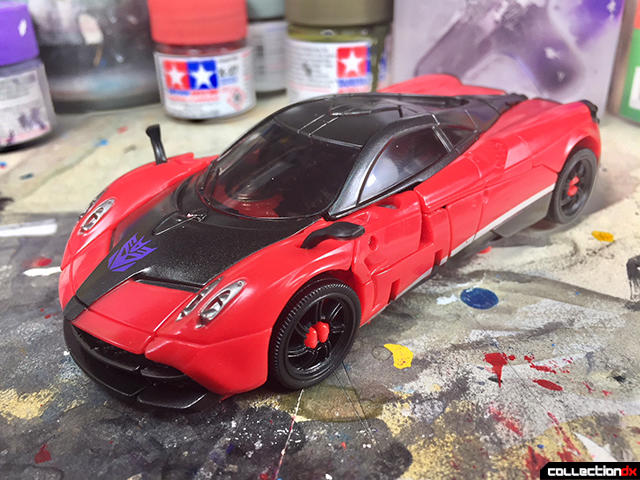 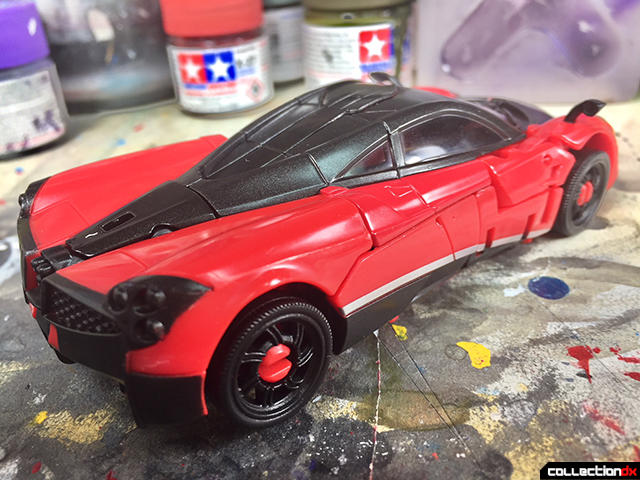 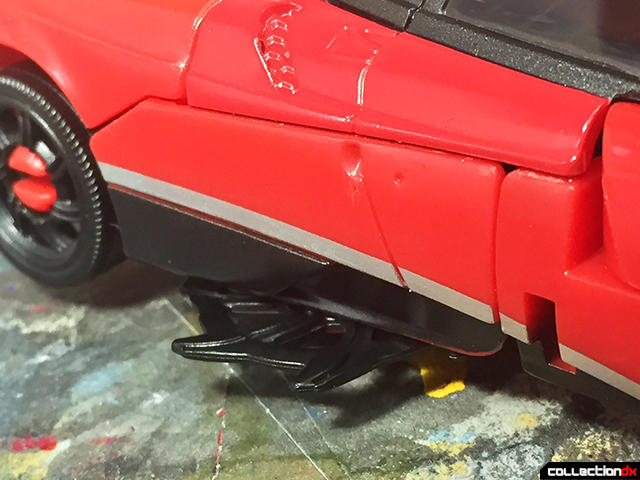 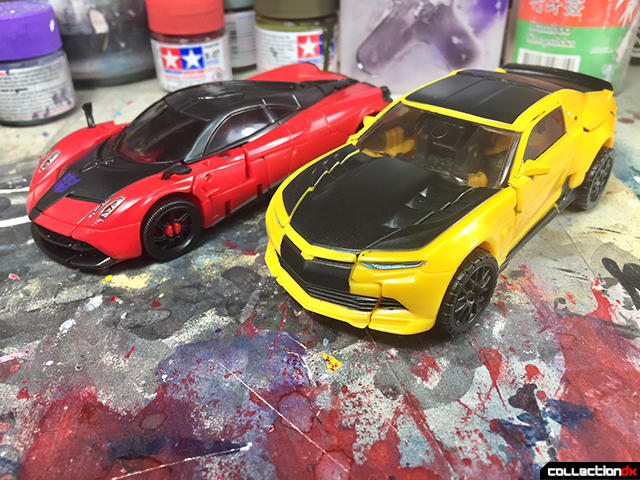 Stinger’s transformation into robot mode is very complicated and interesting, and not as fiddly as his wave 1 nemesis Studio Series Bumblebee. The canopy disconnects from the top of the car, and both sides extend outward, (with the canopy attached to one side) forming not only the arms but his chest as well. His head folds out and rotates around, resting over the car mode’s front wheels while the back sections of the car fold down behind his shins, instantly forming the legs. After that, the entire back of the car folds over the windshield, and then the hood section pivots in that windshield, finally forming the body. Afterward, the armatures in his back orient themselves, and the canopy section ingeniously folds up to form his arm cannon. Finally, just put the saw blades into place and you’re done!

Stinger’s robot mode is just super cool looking. He just looks so antagonistic and mean, like a humanoid insect, and I really like it. The actual mode holds together really well too, and given the arm cannon he has this figure is also very fun to pose. I will say that it is inaccurate for him to have both a right hand and the cannon, but I like it. They needed something to do with the canopy without him permanently having one hand, so for that, I appreciate it’s inclusion, because honestly in my movie figures, I’m just looking for them to look good, be well detailed, and have interesting transformations, and Stinger definitely has all three. 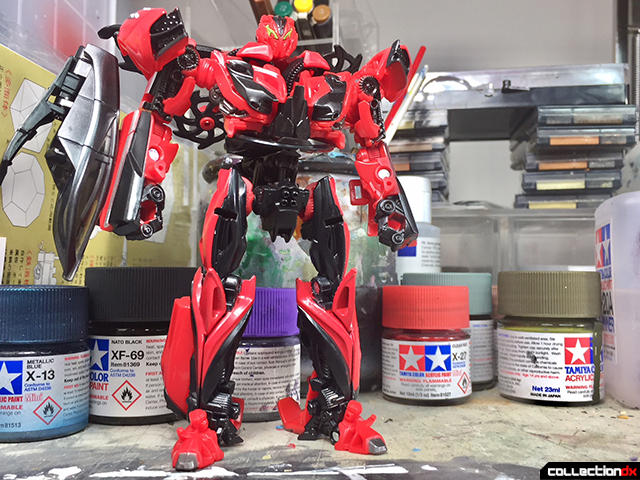 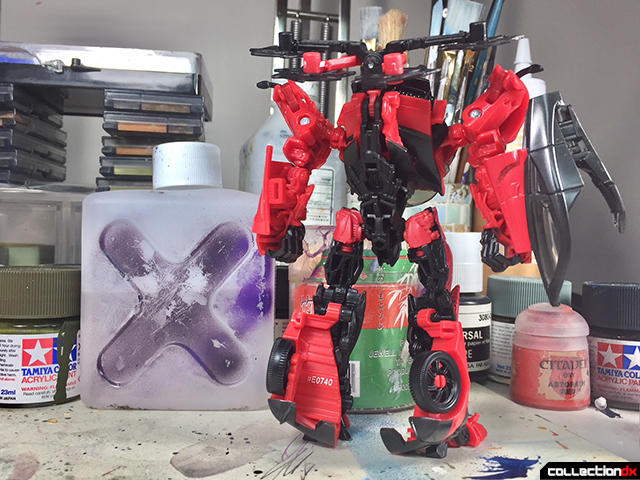 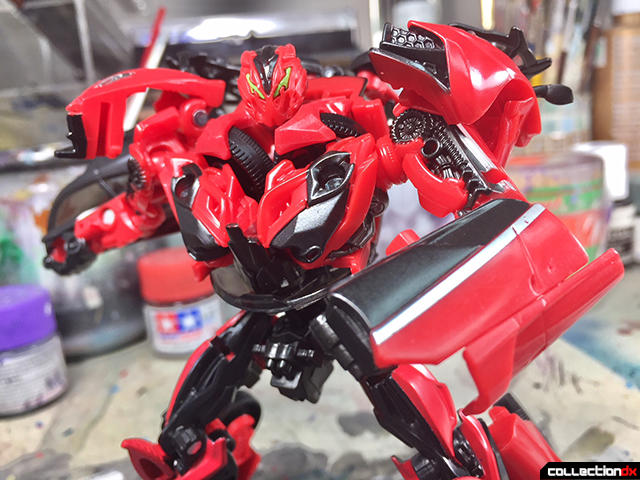 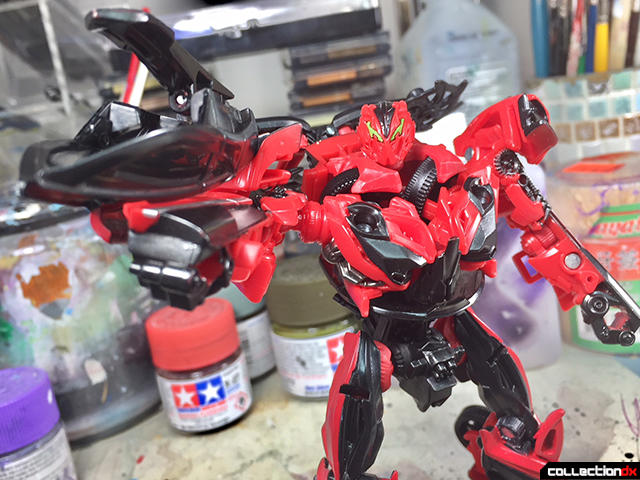 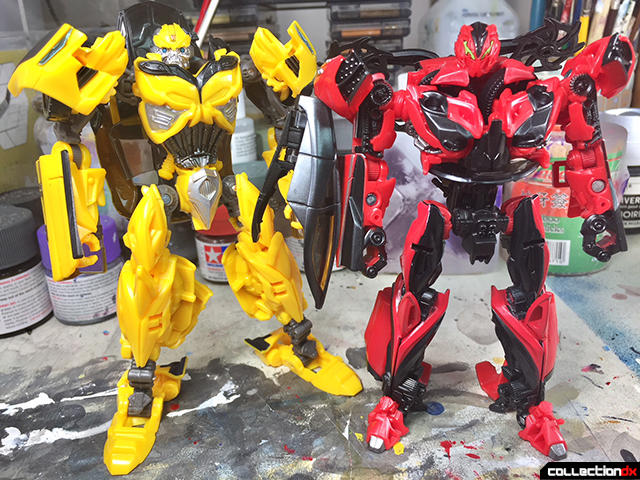 In conclusion, I’m very glad that the Transformers Studio Series Decepticon Stinger exists. He might not be the most screen accurate figure in the line thus far, but he is definitely still a very good one, with some nice detailing, an amazing looking alt mode, pretty decent articulation and a very interesting transformation. You might not want to pay $20 for this figure, but I still highly recommend Stinger, he’s a very solid Decepticon for your ranks, and will look great next to both the Voyager class Age of Extinction Galvatron, and the upcoming Studio Series Lockdown.

Does the arm cannon inaccuracy bother you as it kind of goes against the idea of the studio series’ commitment to accuracy, or do you not care at all?

It'd be nice if they'd went with the transforming arm. But it seems like there's a certain ceiling with this line when it comes to detail & quality, so I'm not surprised.