This toy was kindly donated by Rodimus78.

A while back I reviewed the Transformers Generation 2 set of Dreadwing and Smokescreen. The Smokescreen figure in particular caught some interest from both fans and designers alike. I have said that the Generation 2 line was a starting point of novel concepts in Transformers like articulation and especially ball joints. Someone must have really liked this toy because the exact same design was used to create the Starscream figure for Transformers Energon almost a decade later. 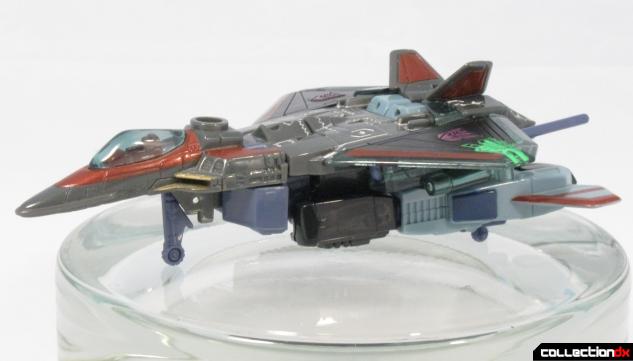 Starscream starts out as a F-22 style jet. He's not nearly as sleek as Smokescreen. He sits on a full set of tricycle landing gear with fixed wheels.

One complaint against this toy is that it has a lot of molded "battle damage" to reflect the character's image of a kind of ghostly apparition. It doesn't look that impressive and subsequent repaints of this toy look uneven with pristine paint contrasting cracked armor. 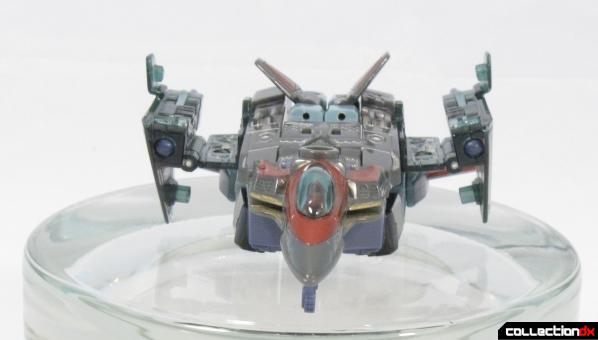 Folding down Starscream's wings reveals a pair of missile launchers. They are your standard spring loaded type and send their plastic payload a good couple of inches across the table. 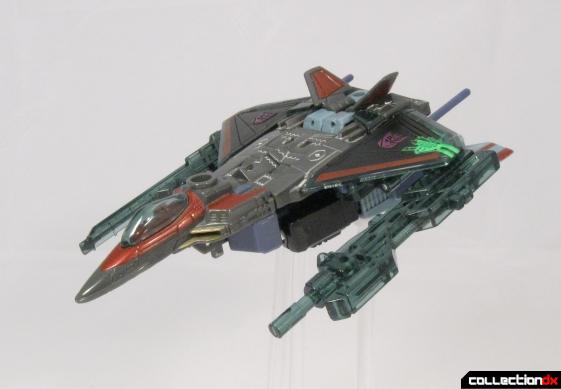 You can also attach Starscream's energon weapons to his wings. 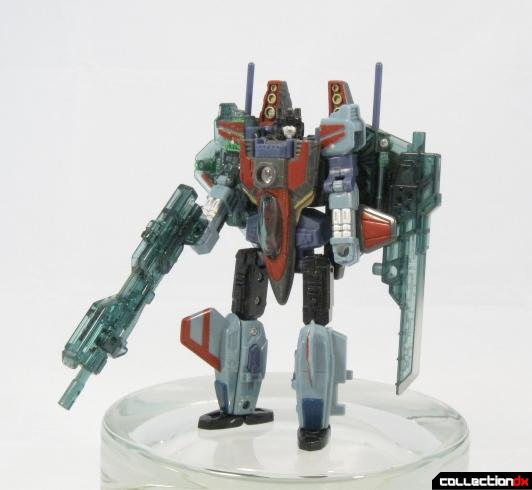 Transformation is quick, easy, and practical identical to the Smokescreen figure. Starscream features articulation in his shoulders, elbows, knees, neck, and hips. In robot mode, this figure certainly looks the part of Starscream. In fact he seems to have more of the original Generation 1 appearance than the Armada design he succeeds. 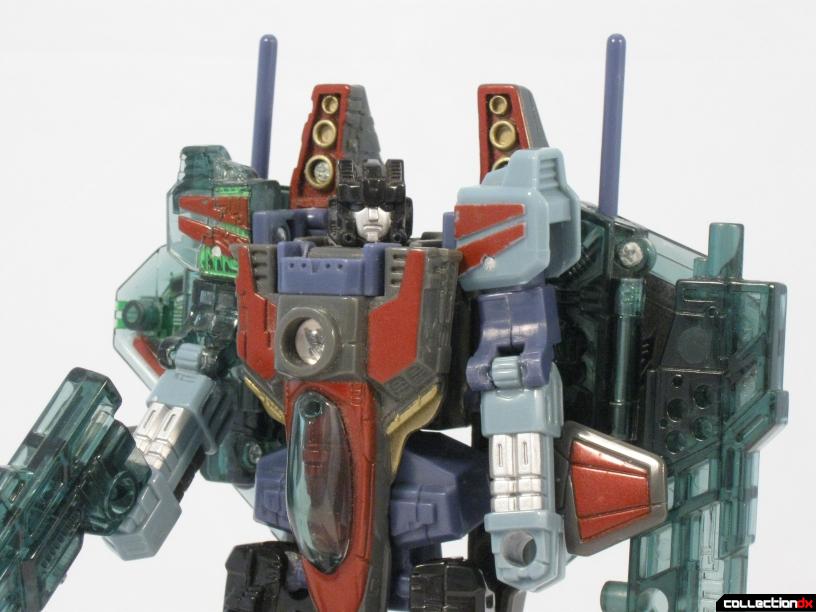 The paint apps on this figure are a little dull. None of the colors stand out and the "damaged" gives him a halfhearted asymmetrical appearance. His eyes feature the typical light piping gimmick but his cloudy gray eyes barely let anything through except an intense flashlight blast from the rear. 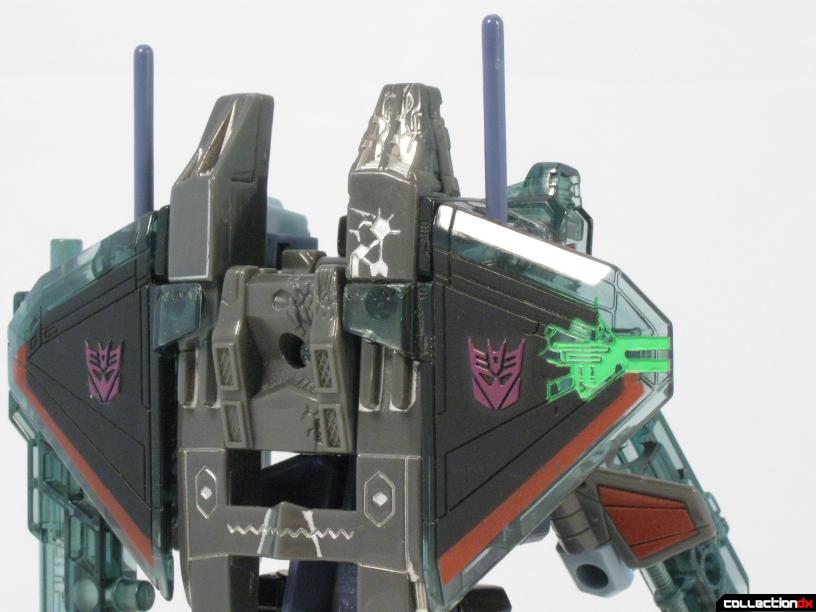 On the back you can see some of the figure's better details like the embossed Decepticon symbols and the bright green wing damage. The silver details around the backpack damage is again, mediocre. 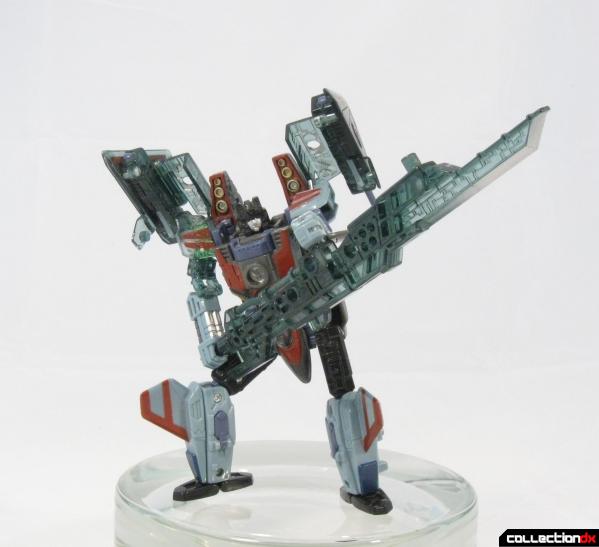 Snapping his weapons together, Starscream gains a sword that would make Cloud Strife blush. While it looks cool, there's really only one way for the figure to hold it with both hands. 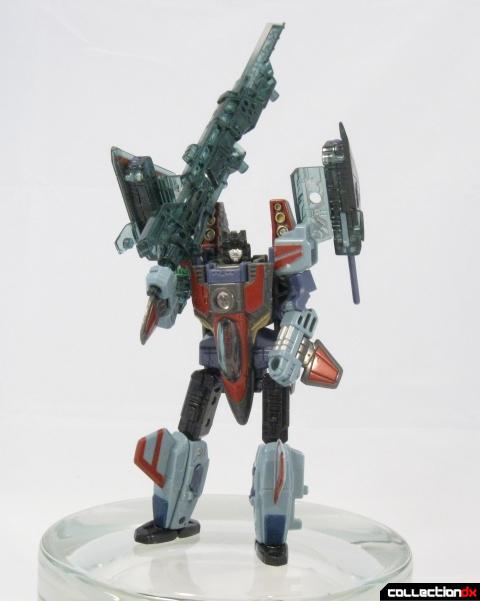 Energon Starscream is a decent figure but in many ways I feel his unique weapons are not as well realized as Smokescreen's very straightforward approach. Oddly enough the Smokescreen figure was released as Starscream in the Beast Wars II line. This particular figure has received a few repaints, most recently as Transformers Collector's Club figures. Still its an interesting curiosity. Further proof that the legacy of Transformer Generation 2 continues onward.

I do not claim to be an artist.

7 comments posted
I hate this toy. I gave his

I hate this toy. I gave his sword to Sam's Club Overload.

One of my favorite Starscreams! You gotta be a little more imaginative with the weapons; not only is it a giant sword when connected, but you can also have 'em hold it like a giant cannon (both hands will hold the two handles).

Anyway, I loved 'em right off the bat, since Smokescreen was such a cool figure (one of my favorites when I was a kid). Allows for more articulation than other Transformers (at least...at the time. Way more articulation nowadays).

I like this Starscream a lot. Since I was a big fan of Armada, seeing him in the next one was pretty cool, although after he showed up I never watched the cartoon again. This toy is pretty cool and personally I like the energon cracks on him. It's just unfortunate that all the molds of him have his now.

And man... those missles are really dinky.

Some people on youtube are offering to send my old transformers to review. Everyone should feel free to do so. After the review each toy will be immolated in a pyre.

I hope that doesn't mean you're immolating Starscream...

He'd just come back as a ghost anyway.