Sometimes things are so out there and hideous that you have to get them, else no one would believe you when you told them about them.

Such is the case with Spider-Man Adventure Hero. 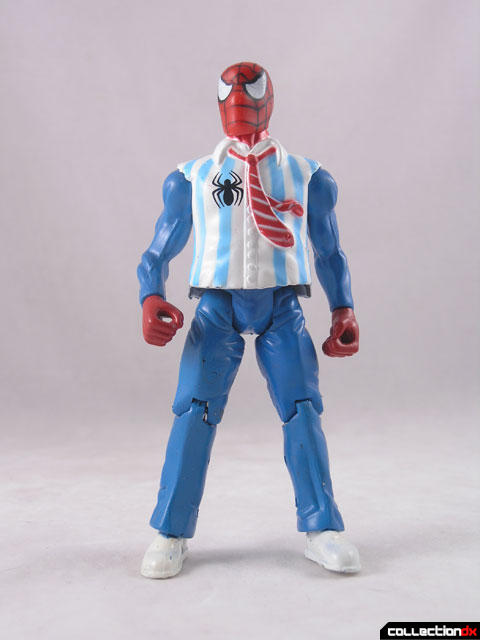 It was a chilly February, and Dan, Adam and I were in New York City, doing some toy shopping in Chinatown between meetings at Toy fair.

We were just coming out of a disappointing tour of Elizabeth St when I came across this vendor. he had the usual tourist crap, and out front of his store he had a bunch of toys. Most were your garden variety bootlegs - disney toys, power rangers, etc.. But this one caught my eye. I started to take pictures of it, when the owner comes out to yell at me like I had just disgraced his family.

So, having stolen the toys soul with my magical camera, and not wanting a curse upon my family, I offered to buy it. I paid too much, but in retrospect, it was worth it.

So where to begin with this one.

Judging by the packaging there is a whole assortment of "Adventure Hero" versions of Spider-man. He plays Baseball, basketball, Soccer, he even boxes. 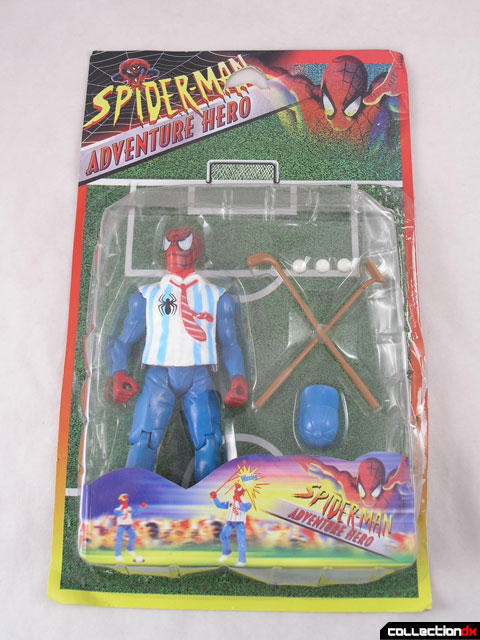 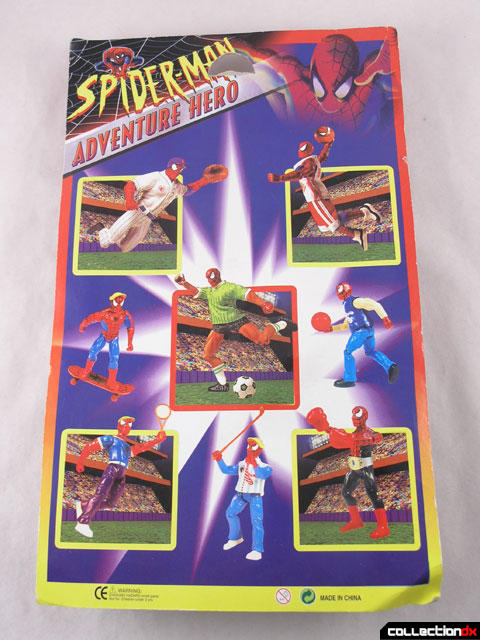 Of course, I got the Golf one. The juxtaposition with Golf Clubs, baseball cap, and then the sleveless shirt with tie is too awesome for words. 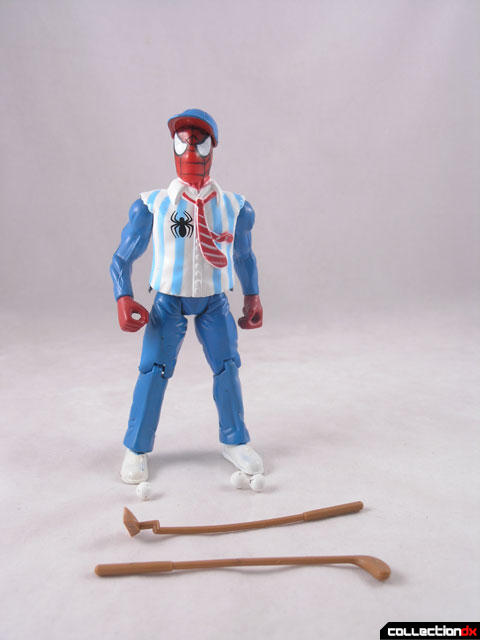 It's clearly a case of a Spider-Man head stuck to someone else's body. The only thing I could think of is maybe this is the body for the WWE wrestler Mankind, who wore a similar outfit. 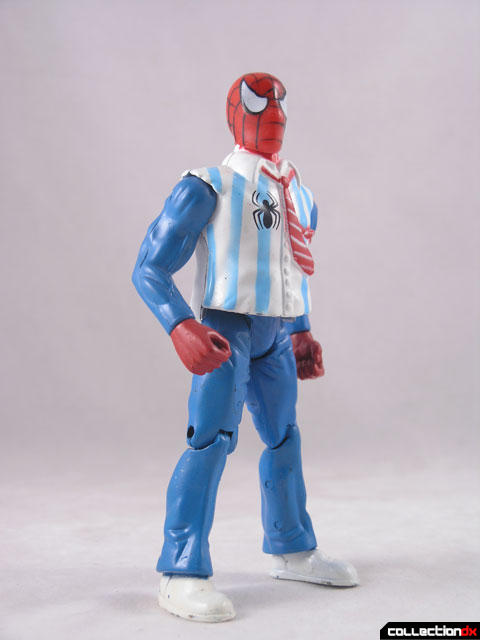 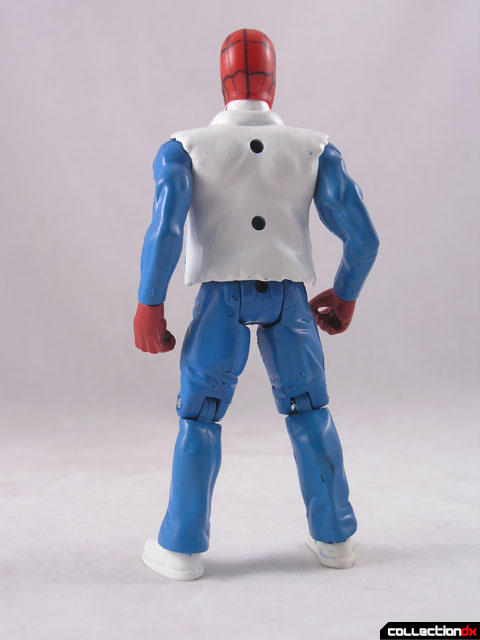 The plastic is really cheap - a thick hard rubber. But it is very solid, with decent articulation. If it werent for the fear of poisoned paint, I might have given this to the kids. 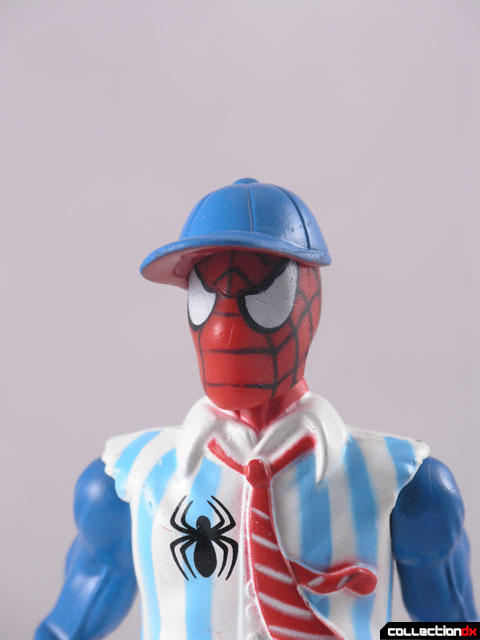 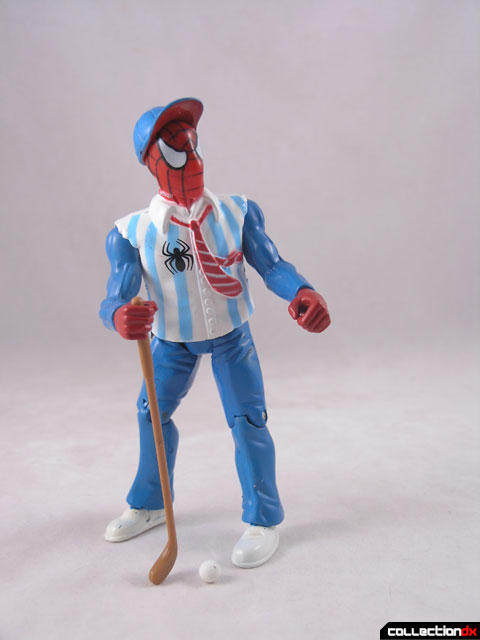 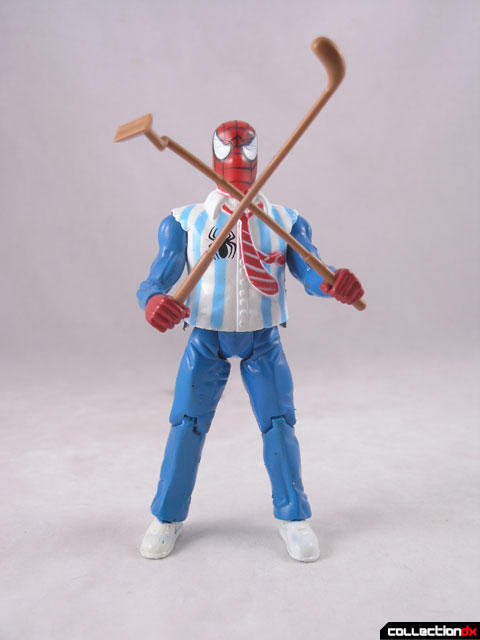 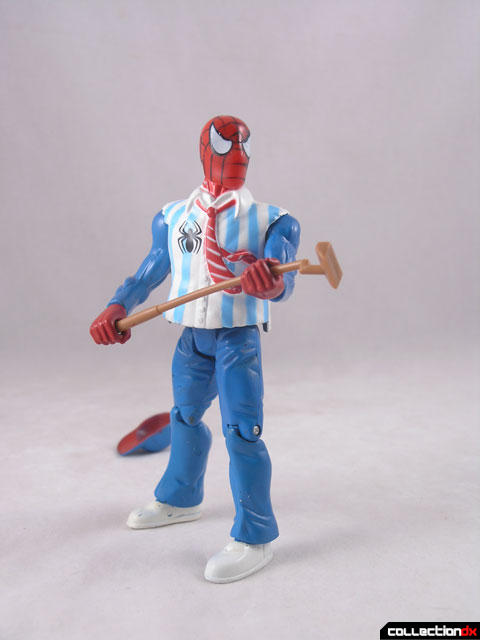 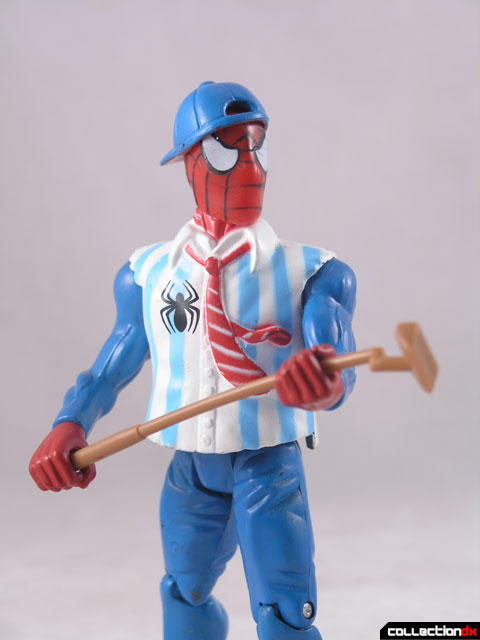 The real treat here is the packaging. Each variant is displayed proudly on the back and someone clearly spent a lot of time on the graphics. 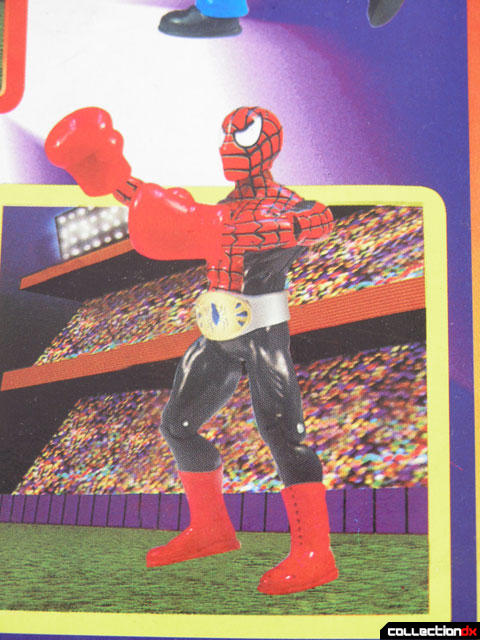 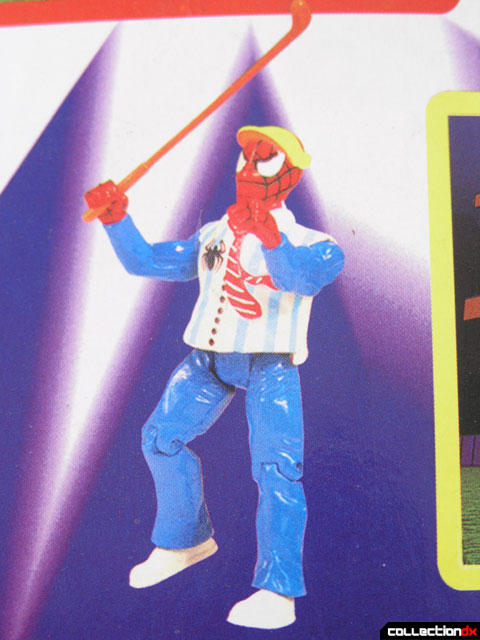 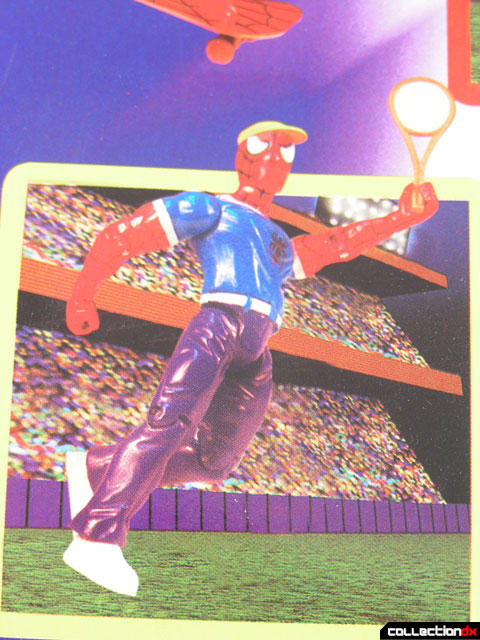 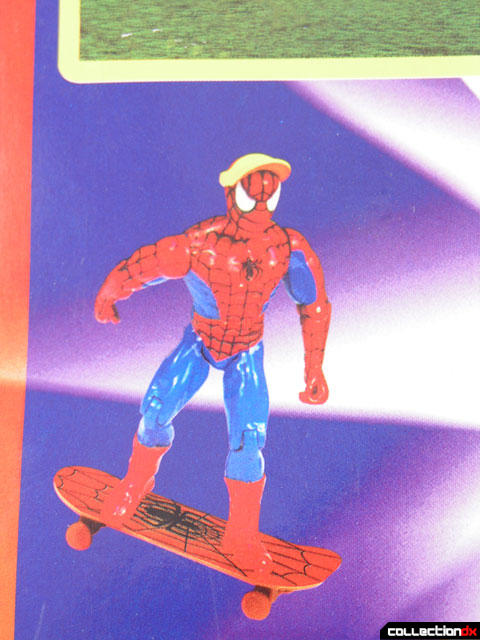 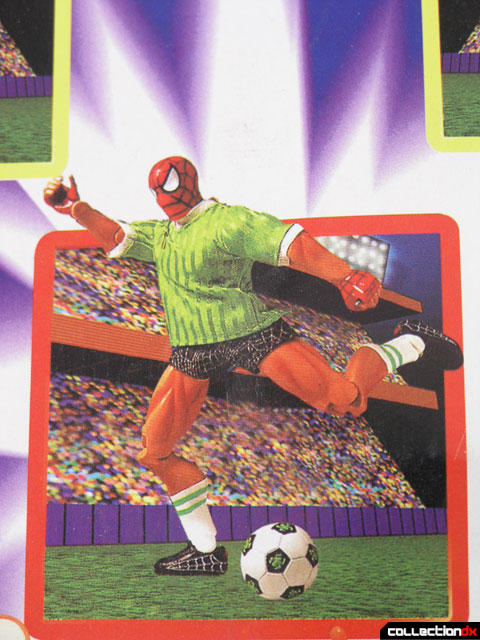 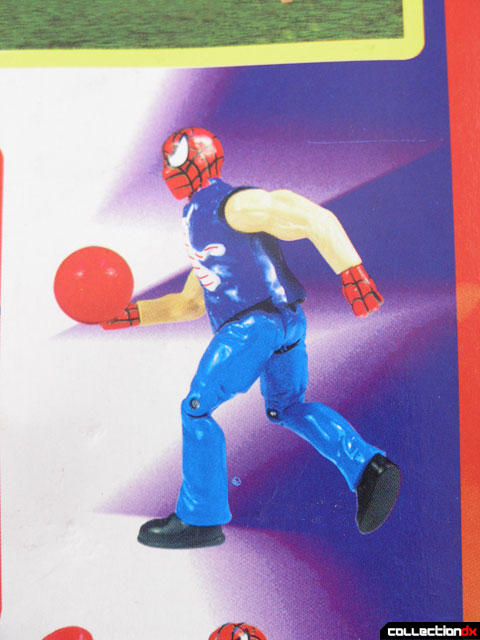 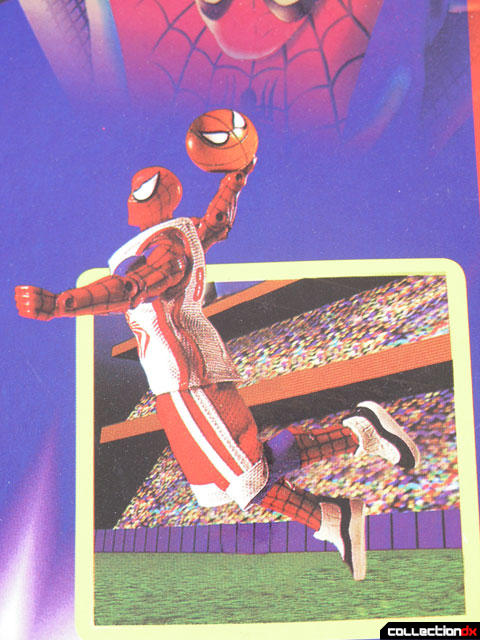 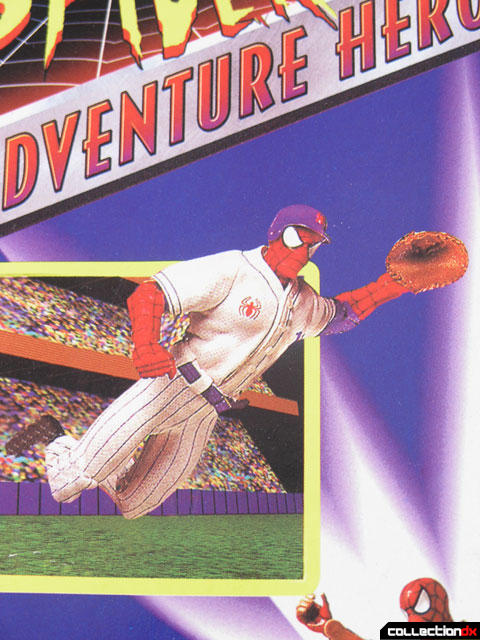 My favorite is the golfer Spider-Man declaring "Winning!!!" 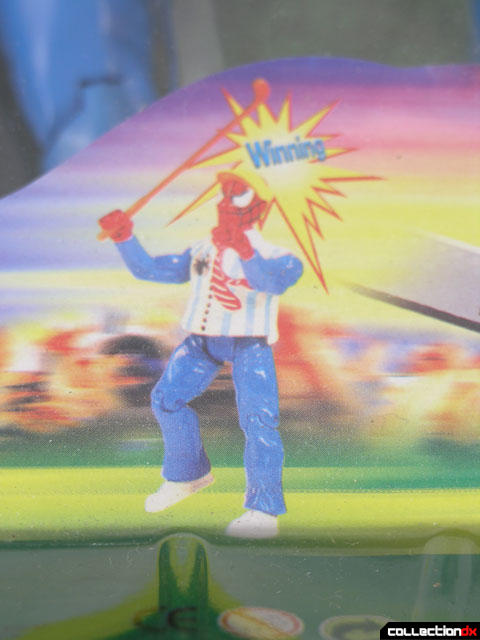 I personally like how Soccer Spidey suddenly develops a decidedly ethnic complexion.... LOL

I just noticed that, LOL!

This is really beautiful. This is the kind of thing I expect artists to create. Spider-man as golfer would easily go for $500 at an auction.

Not that you'd ever consider parting with such a masterpiece.

Bootleg of the year! Nice catch!

I can't believe there isn't an ice hockey version, though. I need to see Spidey on skates..

Bowling and Soccer are incredible! YEAH!

I want a basketball that looks like my own head.

I also think the body might be Mankind,because I seem to remember a friend having a Mankind figure with a similar "blowing to the side" necktie.
Am I the only one noticing how strange Spidey's "mouth" area looks? He's missing some of his web lines,and it's oddly distracting.

I think I brought this up during one of the Stickam chats,but when I worked at KB we had a Spidey who was dressed for fly fishing. I guess if he fished while in his normal civilian idenity,the vengeful fish would have given Aunt May lead poisoning or something.
The scary part is that it wasn't a bootleg. People forget this,but before movies like Blade and X-Men started coming out and setting the world on fire,Marvel was pretty damn close to bankruptcy,and as long as money was coming in from the toymakers,they didn't ask too many questions.

The basketball one's great. LeBron Parker? I laugh every time I look at it.

Kidnicky's right: I distinctly remember seeing this line in KB and Toys R Us back in high school. The only toys on the back of that package that were never official toys are the ones NOT in the boxes. The rest are all direct swipes of official toys, crazy as they are.

Spidey with boxing gloves kind of looks like Strong Bad.

It's hard to tell in the pic,but he's giving you the double deuce.

You guys get extra points for the Homestar Runner references!

They appear to be bootlegs of the Spider-man "Adventure Hero" line from 2001.