I have to be up front with you here – this is going to be a biased review. I’ve become good friends with Matt and his crew and I’ve watched these toys come alive through them. It has been an amazing experience, to see someone’s dreams come true. 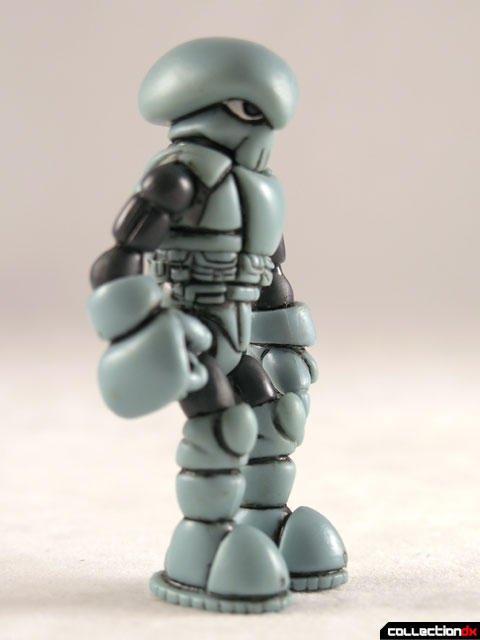 Pheyden is from a small company in Acton Massachusetts called Onell Design. He is the creation of local artist / toymaker Matt Doughty. Matt has been drawing Pheyden and other characters since he was a kid. He created a comic called Gears Edge, and Pheyden is one of the characters from it. 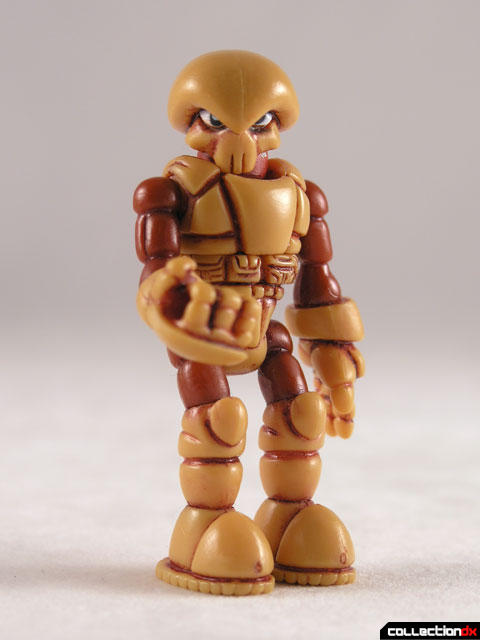 I won’t admit to knowing a lot about the character. The back of the package describes Pheyden as:

What that means, I have no idea. 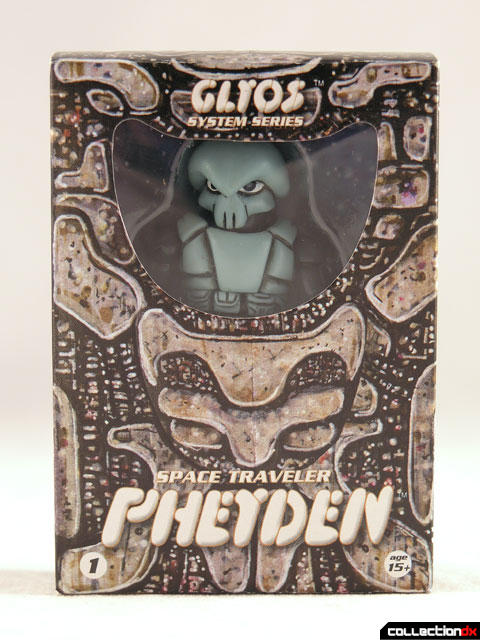 Each Pheydon comes in a nice window box that is unique to this character. Pheydon comes in three colors – Standard (Blue),Gears Edge (Sepia) and Phase (Green). You can see each figure through the window on front so there is no surprise as to what you are getting. There is also a small sticker on the bottom of the box denoting which figure is inside. The sticker is a nod to the small stickers affixed to vintage Japanese toy boxes to show that the toys were officially licensed. Pheyden rests in a form-fit clear plastic tray, and incuded in the box is a trading card and a small fold out booklet (another nod to vintage Japanese toys, this time the fold out catalogs that came with old Takara toys). 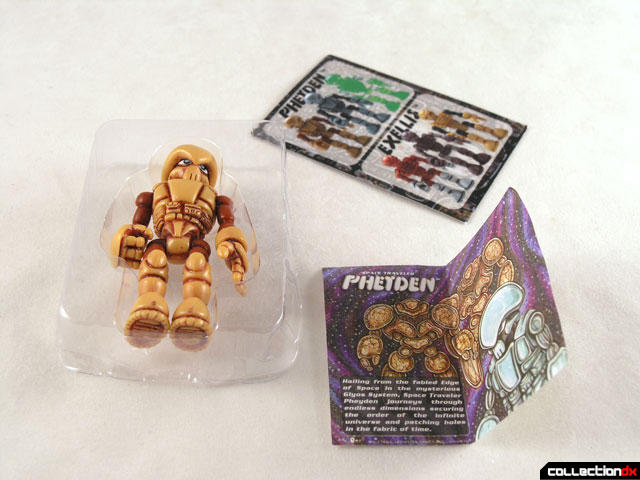 The figure itself is really cool, but I can understand how the aesthetics aren’t for everyone. This is very much an action figure, not some high-end collectable to be locked behind glass. In this age of super-expensive limited run designer vinyls that don’t actually do anything, it is refreshing to handle an artist-created toy that I can fiddle with that wont break the bank. There are no egos or names here – just a cool little figure. 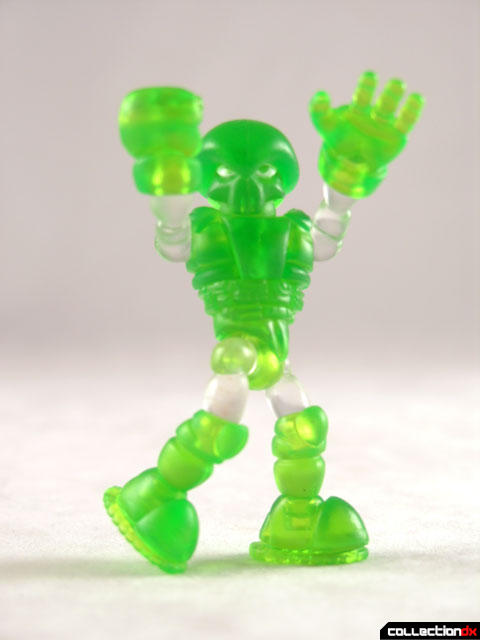 Pheyden is 2.75” tall and has 12 points of articulation. Each joint is a swivel joint that you can actually pop out with a little effort. The idea here was to make it so that any part of any figure in the line can be exchanged with any other figure in the line. Right now there are only two figures out, but in the future this will become a great asset. Other toys designed by Onell share similar connection points (Saucernauts, for example). 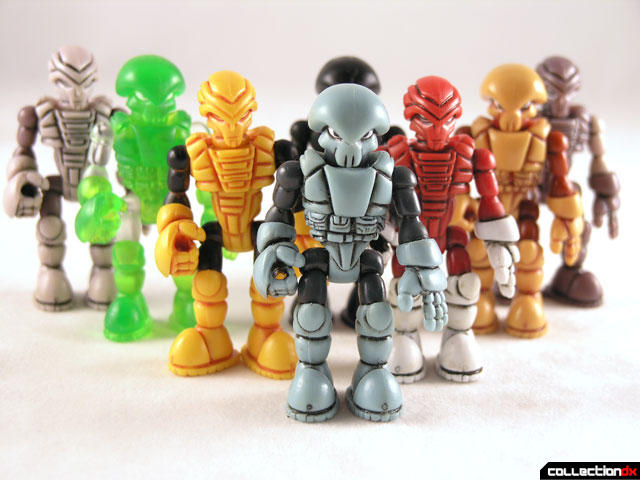 I like the fact that these are just fun to hold and play around with. I keep a few next to the desk and find myself fiddling with them all the time. The joints are tight and they stay tight. I like the designs a lot, and I specifically love the translucent green one. I like that I don’t have to be afraid to hand these to my kids and worry about them breaking them. I can’t stress it enough – these things are STURDY.

I really like the end result of the toy, but there are a few things I would have done differently. For one – I would have liked to have seen 2 closed fists, or an extra one included with the set. I would have also liked for them to have included some sort of weapon. Matt has told me that the hand was designed to hold any standard Star Wars weapon, but still, I’ve seen the weapons these guys make, and they are pretty awesome. Finally, the only other thing that is missing is holes in the feet. All your great action figures have holes in the feet to attach to action figure stands. Why not Phaedon? 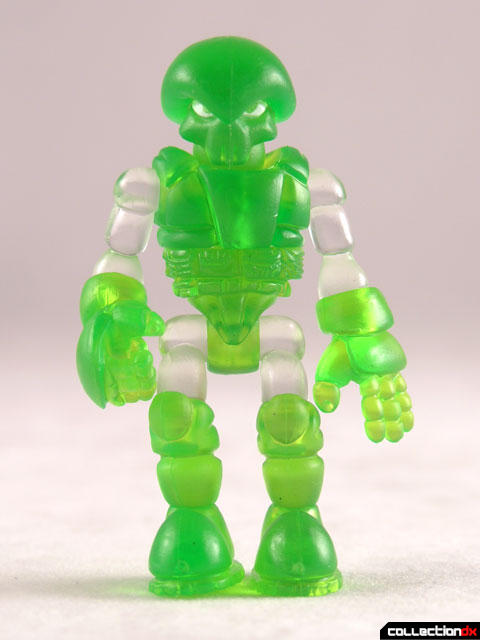 Like I said, I am a little biased, but I think you should check these out. They have what a lot of the “collector” toys are missing these days, and that is FUN. You can actually play with them.

Pheyden (and the other Onell Design figures) are available at http://www.onelldesign.com

I agree with you, the lack of a weapon is a little disappointing, but otherwise these figures are fun on a bun. Hopefully we'll get an accessory pack with a pile of hand-held weapons and replacement accessory limbs.

I also think it's worth noting that while most small independent toy makers are using the sofubi format to express themselves, these are made of solid, extremely durable injection-molded PVC. Onell really is paving the way here to do something different.

I was speaking with Matt Doughty recently and he said, "I want it to be the summer of '87 forever." I think these guys have the right idea.

...Just keep in mind I'm a lefty...and I had to sorta whip it sidearm to avoid hitting something valuable or crashing into something in my cramped loft! ;)

Anyway, I'm clearly biased as well. I love what these guys have done...and I love even more what they have coming!

Just to re-post what I've mentioned on TBDX, what I found fascinating about these toys is that at SDCC, everyone was stopping by to check 'em out. Young adults, old ornery collectors, young children. No one left without a smile on their face...

At the same time, only one sort of people or another would visit the other toy makers' booths. It really takes something to have the universal appeal Onell Design has touched upon.