The Shogun Action Vehicles Solar Saucer is another of the more popular entries in the line, likely because it's such an iconic vehicle from a show that was actually broadcast in the regions where the Shogun line was sold. Plus, it's a Spazer that shoots a mini Grendizer. So there's that. 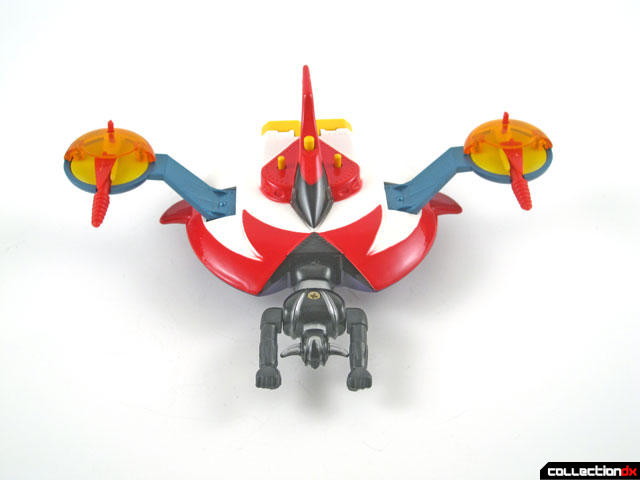 As with all the Shogun Action Vehicles, this one originates in Japan as Popy's PA-61 UFO Robo Grendizer. This doesn't seem to be that hard a piece to get, but for me, it was a pain in the butt. Unsure of it's market value, I asked a friend's advice and was given an estimate of how much to expect to pay. The first three times I tried to buy one, it sold for more than that estimate so the next time, I bit the bullet, upped my bid and won. Naturally, about a week or two after I got it in the mail, I see another on Ebay with a Buy It Now of about 1/3rd of that original estimate! I decided to buy it even though I'd already gotten one. Now, I could tell you that I bought it because the box was slightly better than mine or that it had the styrofoam tray that mine was missing and both of those things would be true. But let's face it, I bought it mostly out of spite. So I took the bits I needed and re-listed the leftovers, eventually selling them at a $30 profit. But somehow, the toy arrived with the wing broken so I ended up sending my Spazer to the buyer as a replacement and then replacing mine with a loose one I saw for sale cheaply. After all was said and done, I think I came out even money-wise, but the Spazer I have now has some scratches in the paint that my original one didn't.* C'est la vie... 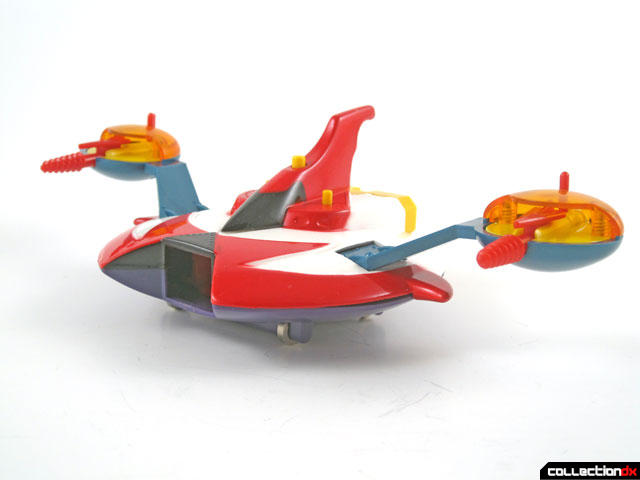 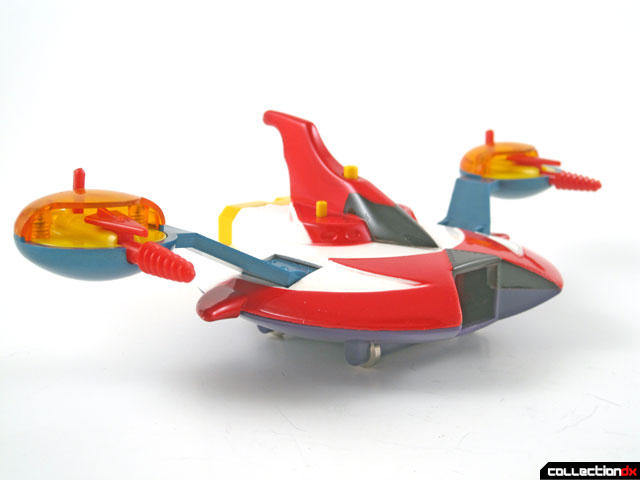 The top half of the main hull of the Solar Saucer is solid die-cast with the rest of the toy plastic. The toy includes three different firing gimmicks. Each wing can fire a drill missile, but no spin saucer. The top part here features clear plastic for those who have that particular toy fetish. 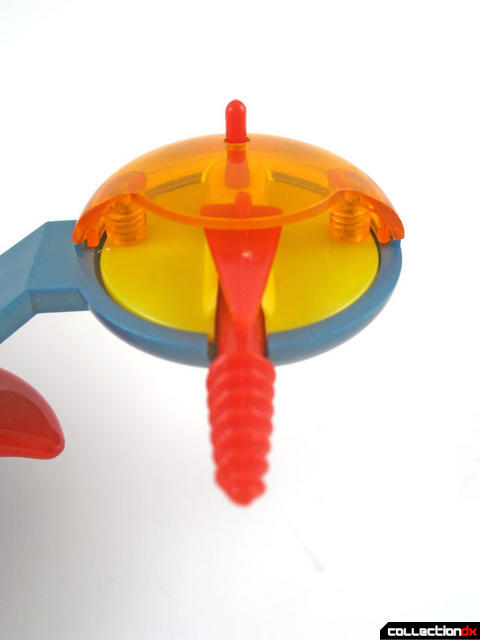 The final launching gimmick I alluded to earlier. With the press of a button, a small mini figure of Grendizer will launch out of the vehicle. Oddly, there are three different buttons that all seem to be used for this same function. I'm not sure why that is. Perhaps the original toy had a different or extra function? If so, I'm unaware of it since I don't own one. Regardless, it's pretty great to have a toy that can replicate Grendizer flying out of the Spazer like he did in the show. 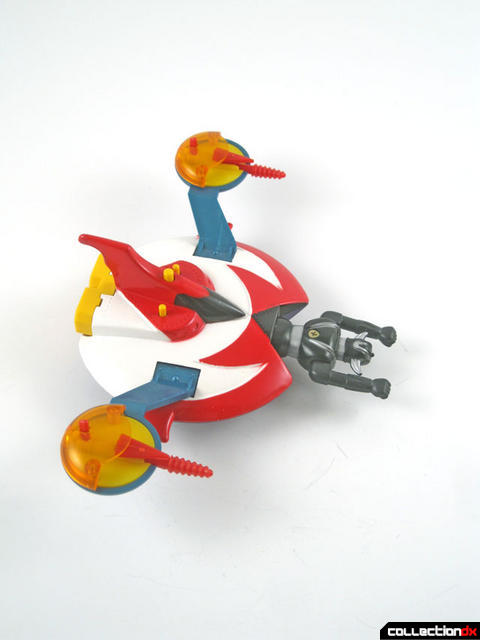 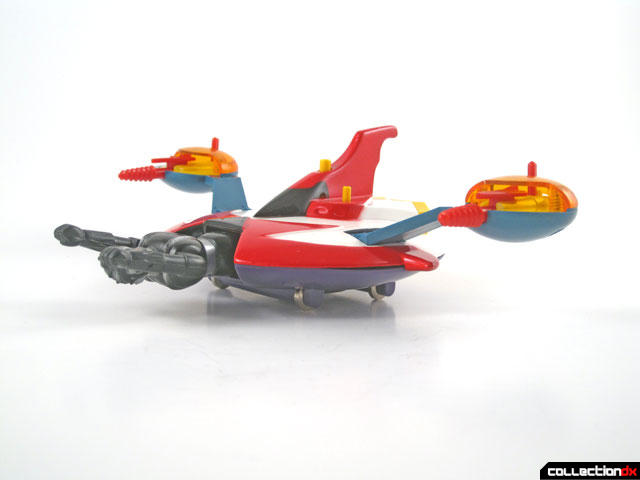 One other gimmick the vehicle has is that the wings can be pointed up, but since this never happens in the show, I didn't bother/forgot to take a photo of it. Really, I think it's more for shipping than anything else.

The Grendizer figure itself is simple, but effective. The legs are necessarily molded together as they need to be able to function with the launching mechanism, but the arms are poseable. A simple black and silver coloration is used for the figure. I'm not a fan of altering vintage toys, but I can't help but assume someone out there has probably painted theirs in anime accurate colors. 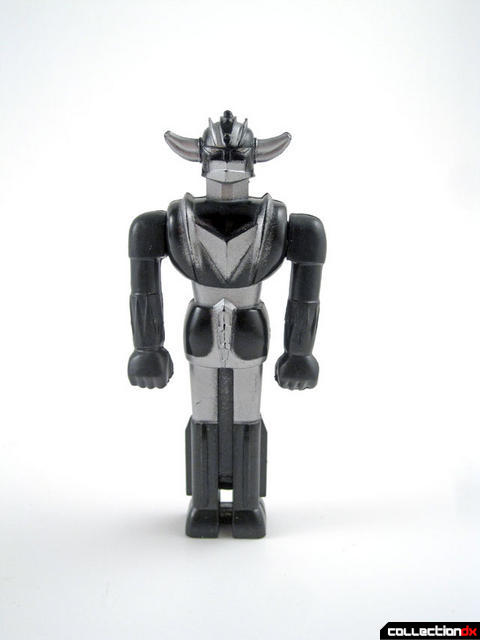 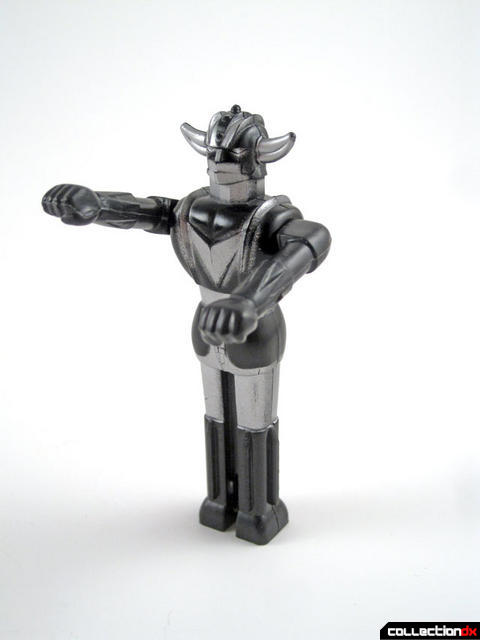 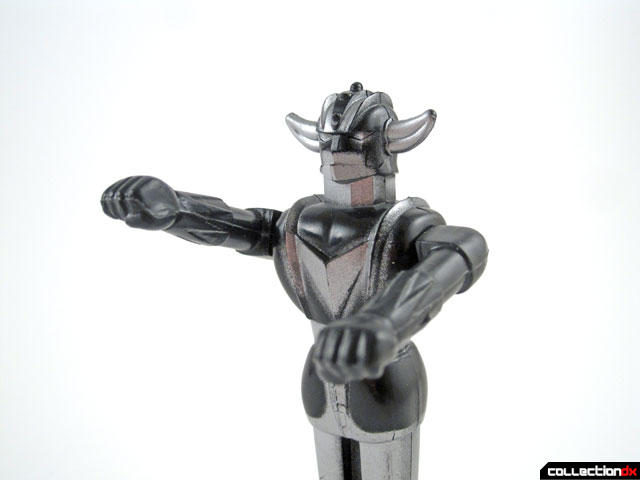 The box is a nice, compact 5" x 4" x 3.75" and features a simple photograph of the toy on the front, along with drawings of the play features on both sides and a simple logo on the top and bottom. The standard "Collect'em all!" image is on the back. 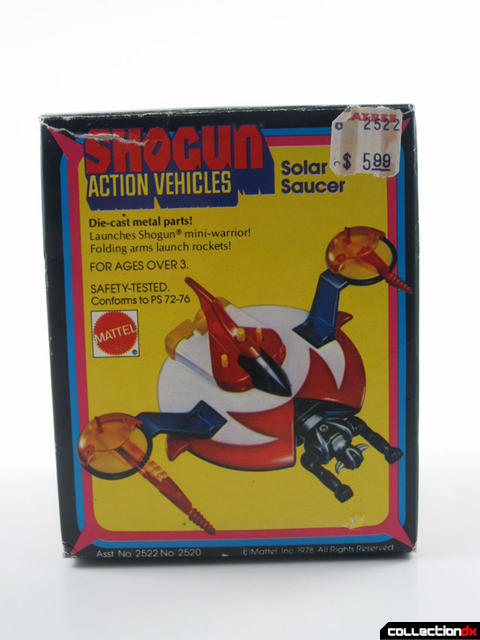 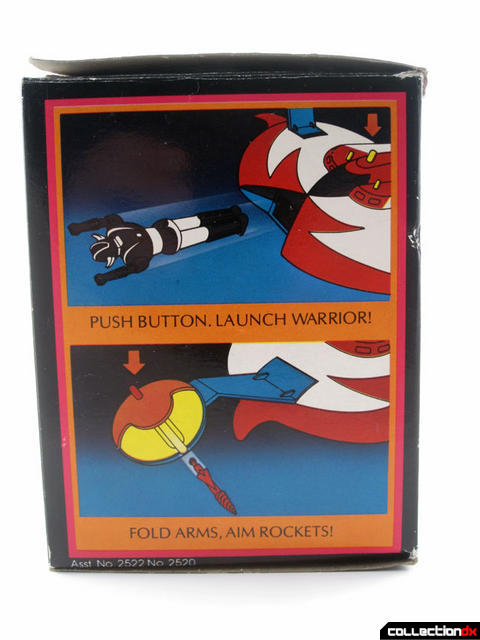 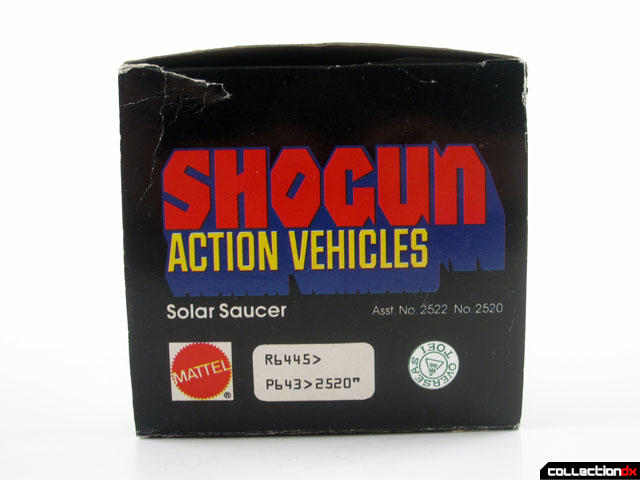 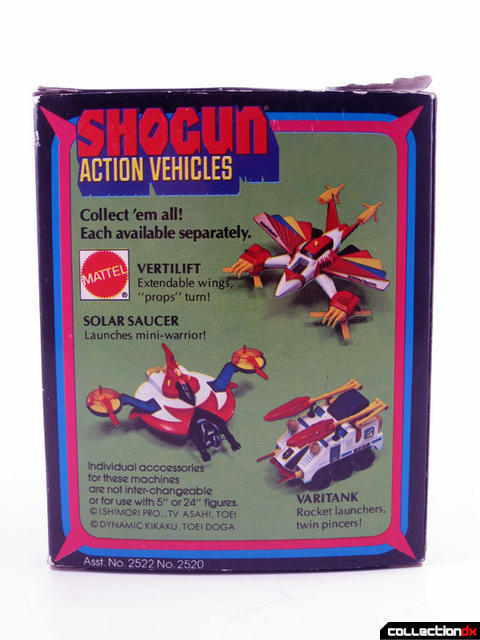 As with all the Shogun toys, you may see box variations for toys that were sold in different parts of the world.

*All of the images in this review were taken before I sent this specimen away so the one I have now is not quite as nice. On the other hand, my box doesn't have that tear through the Shogun logo anymore, which is probably even more important to me.

So, apparently the Popy version is in fact different. It's got a painted Grendizer figure, a chrome rear exhaust piece, stickers on the top of the vehicle and it DOES have a firing spin saucer missile.