Get your Beast Hunters Smokescreen at BBTS.com

I remember trying to stay away from the Prime line only to eventually own almost all of the figures in the line save for a few molds I could care less about. Saving my money became easier once the Beast Hunters line came around because in my opinion, the new armored look of the figures I came to love took a turn for the worst. Then all of a sudden, a familiar character bearing the number 38 appeared. Of course I'm talking about Smokescreen. Although It was nice to see a familiar character, again, it was riddled with the ugly armored look. However, it seems word quickly hit the Hasbro offices about offering removable armor because upcoming figures seem to have removable armor for those not into the armored look. Smokescreen is one of those figures.

Smokescreen was already released as an Takara Arms Micron line using the Prime Knockout mold, but for the Beast Hunters line, it gets it's own mold. And a good one at that... so long as you leave the armor off. Well, it simply comes down to a matter of taste. Lets take a look.

Although the figure comes in armored robot mode, I'll start off in armored vehicle mode. Notice the blue armor that is called the Shadow Quill armor. It's made out of a nice rubbery plastic that fits like a glove onto the vehicle. Up on top is his Electronet weapon which actually shoots! 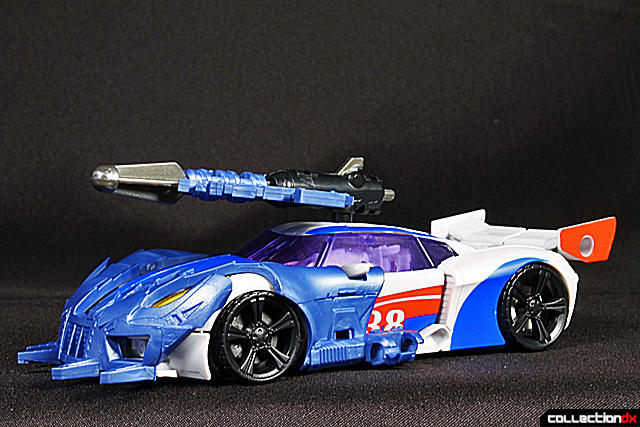 The armor has some nice detailing molded in. 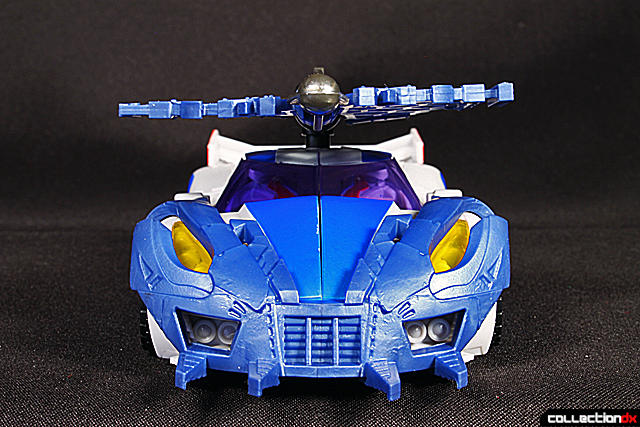 The vehicle mode is actually really nice looking. It looks like a real race car. Especially with that rear spoiler. 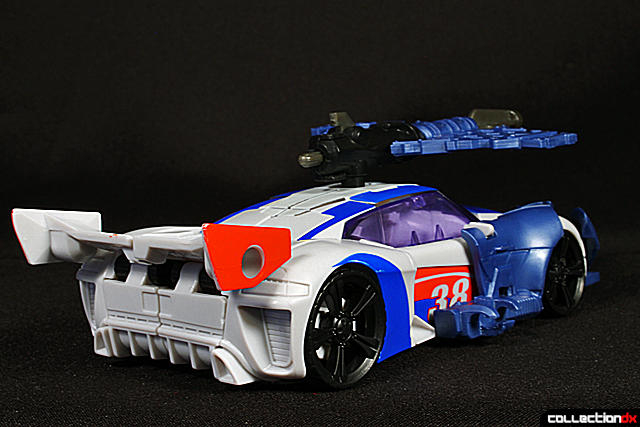 The armor actually tabs into the side of the car and I am surprised at how well it actually fits to the vehicle's shape. 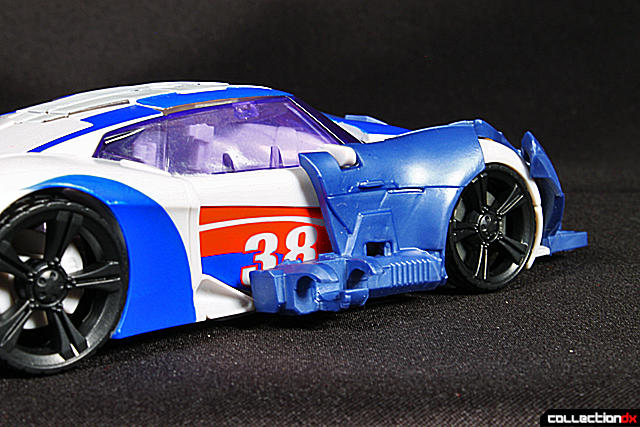 Now let's take a look at robot mode with the Shadow Quill Armor and Electronet Weapon. Although the armor is designed mostly with vehicle mode in mind, the designers have still managed to make it work with robot mode. Again, the armor tabs securely to robot mode. 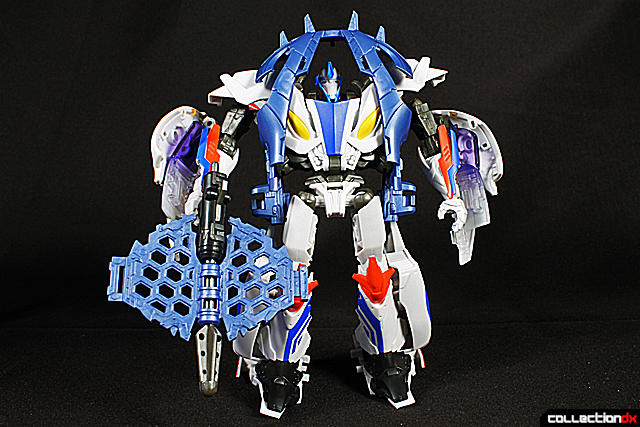 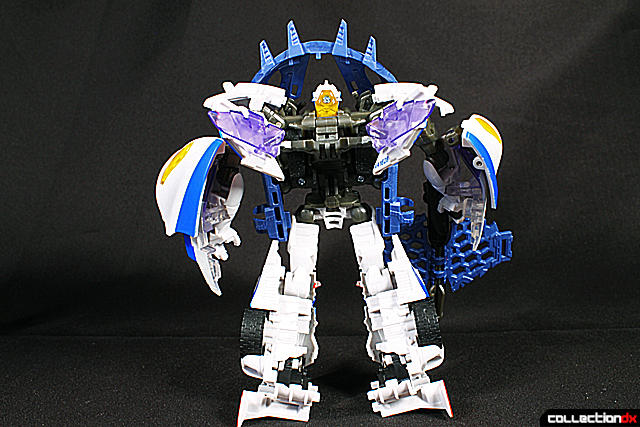 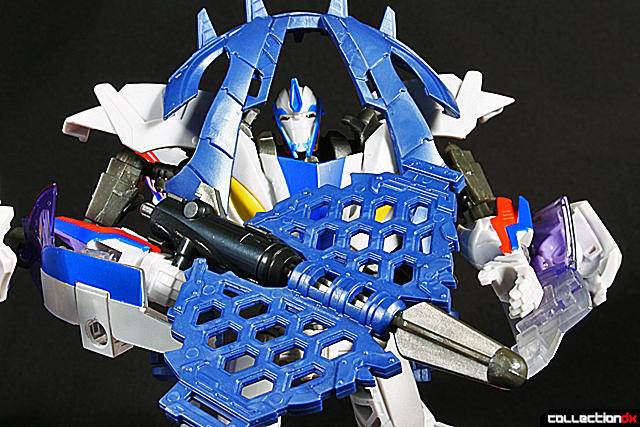 As much as I really honestly try and not like the armor add-ons, they are a lot more tolerable knowing that they are removable. Fortunately, they do not hinder the figure's articulation. 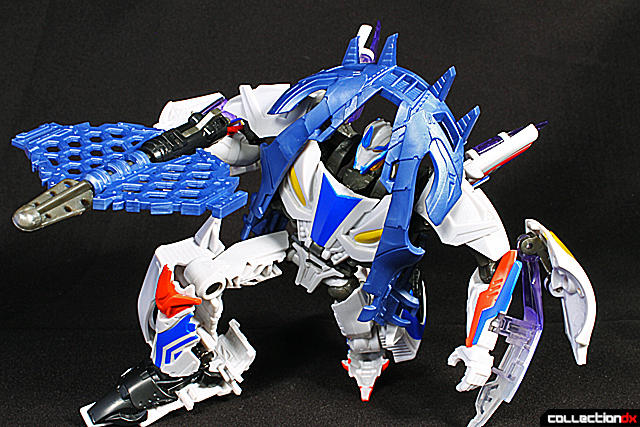 I'm even inclined to think it looks good with all of the armor. 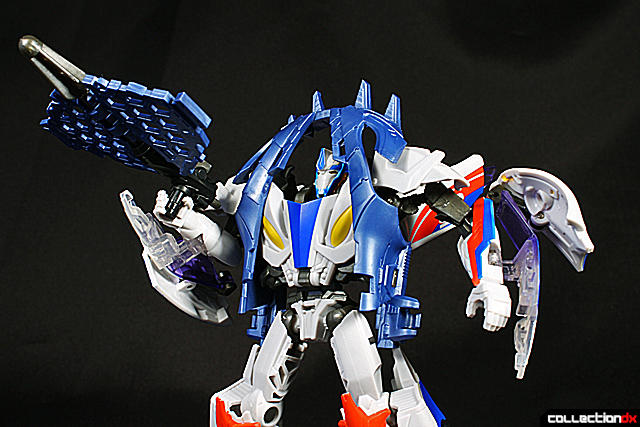 Now, I'll show you the vehicle without the armor. The lack of armor really allows the lines of the car to stand out. 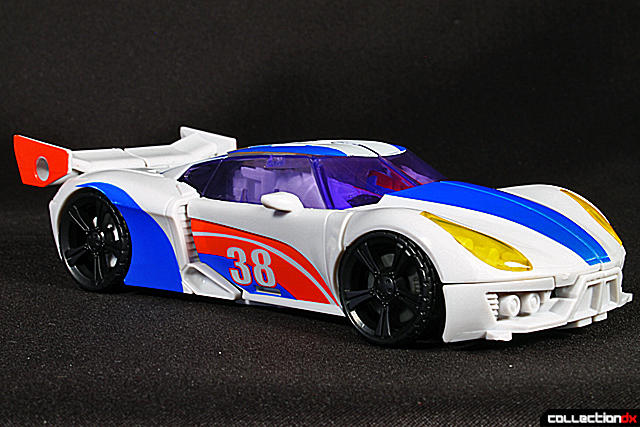 There are some nicely molded details on the front of the car which are sadly enough, unpainted. 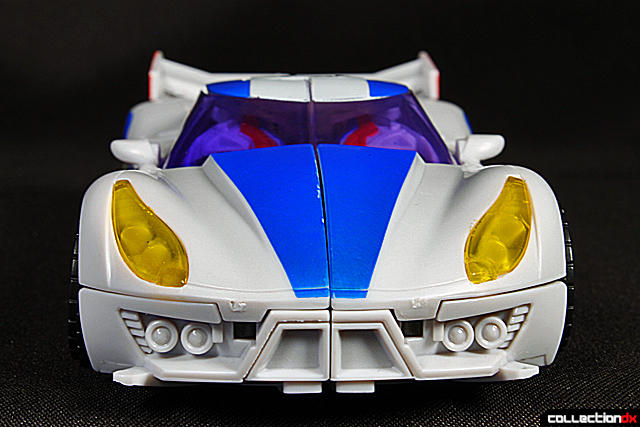 This quarter angle really allows you to see the sleek design of the fenders as the flow down through the doors only to be rudely interrupted by the wide rear fender intakes. 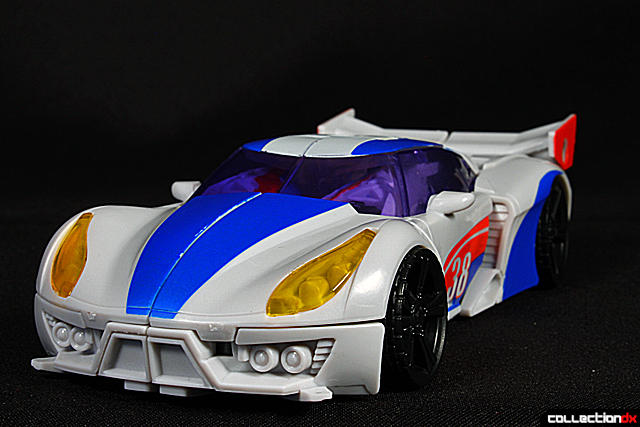 The rear takes some slight styling cues from the Lexus LFA. 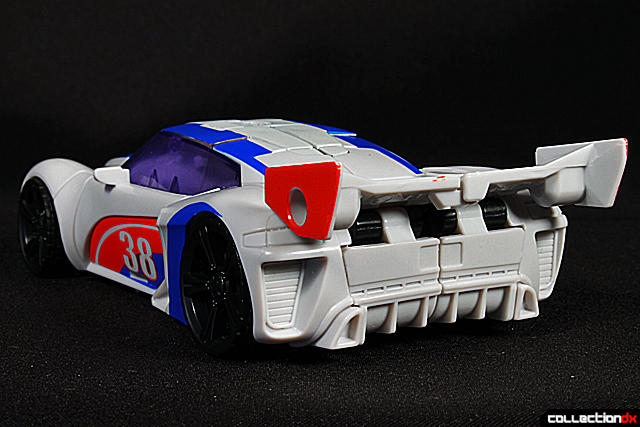 The underside of the car gives away it's robotic background but is cleanly laid out. 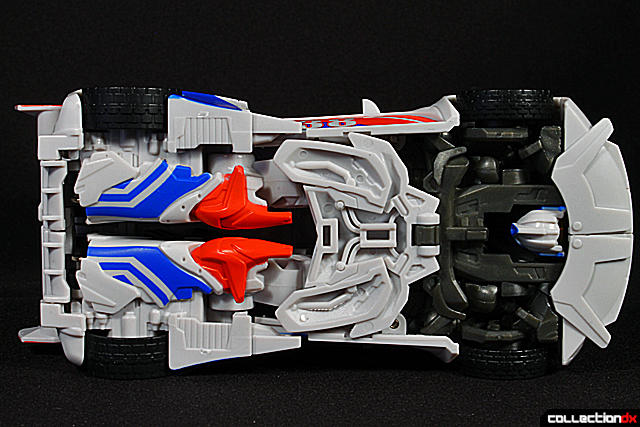 Transformation to robot mode is pretty straight forward with the front end being the one section that requires the most work. 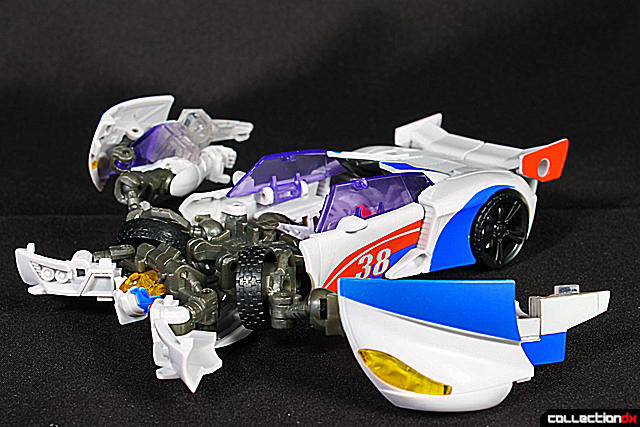 The figure really shines without the armor though in my opinion. The figure looks much cleaner and the design really pops. Notice that the net on the missile can be removed. This also allows the missile to shoot father. 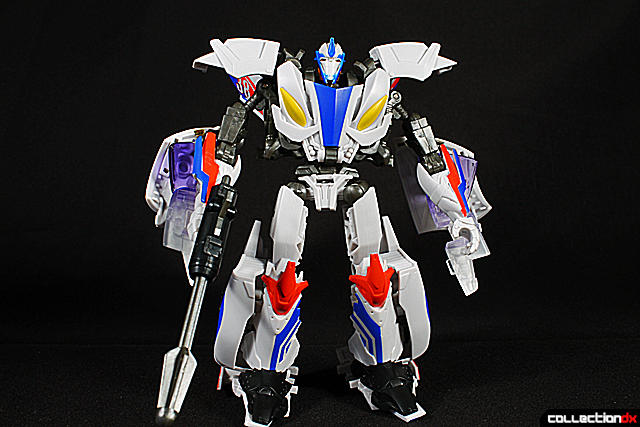 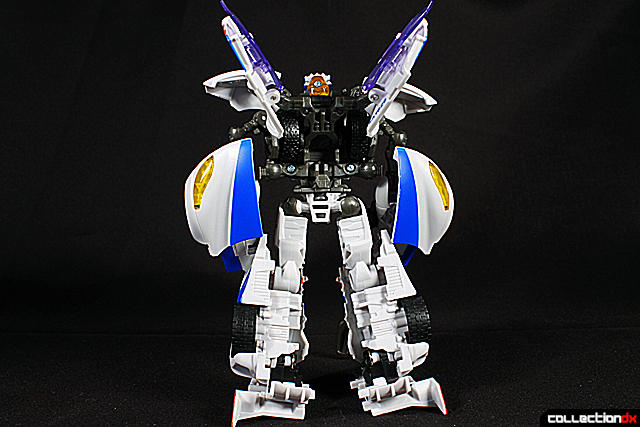 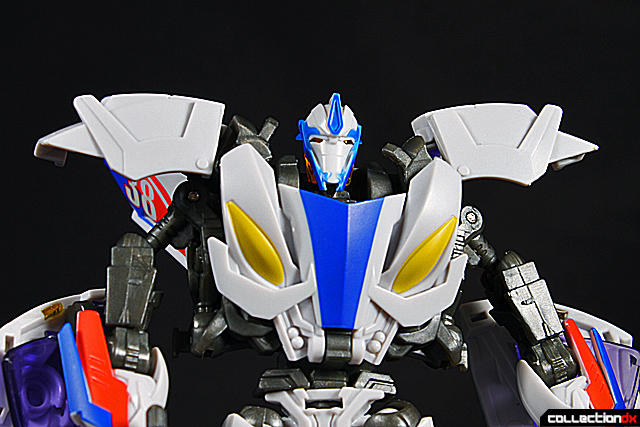 It's very hard to find a bad angle for this figure from the front. 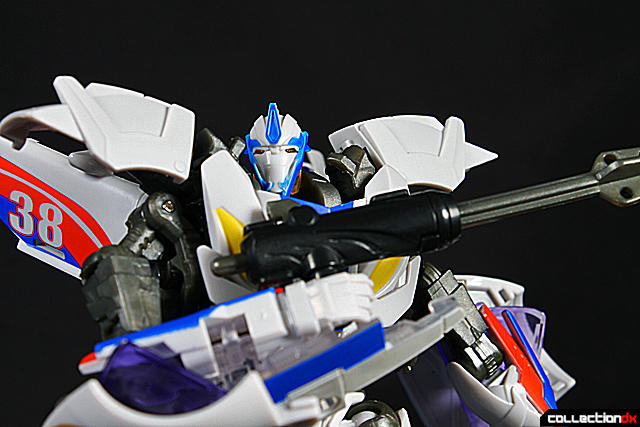 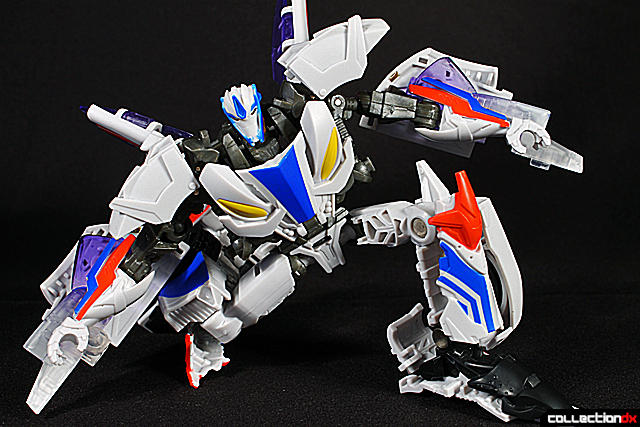 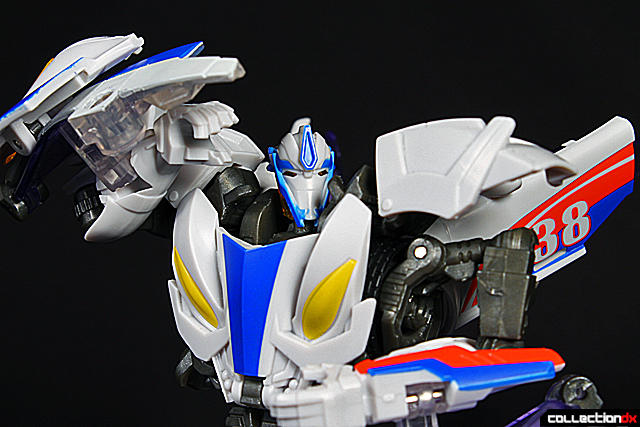 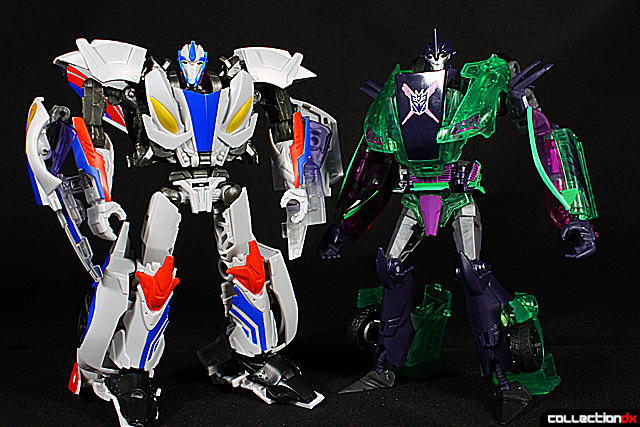 Here he is with the Cyberverse Legion Class Smokescreen. 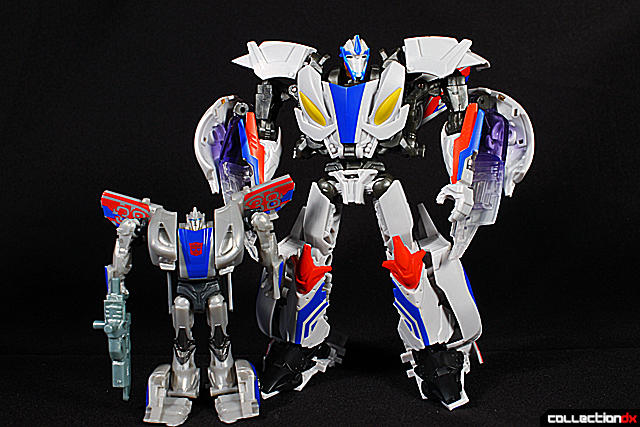 Overall, I do like the figure. I did unfairly try to dislike the whole armor feature because I didn't care for it in the other figures of the line, but knowing it is removable makes me think the rest of the line would be more enjoyable if they all shared this feature. Now if we could just get Prowl and Bluestreak in this mold!

Get your Beast Hunters Smokescreen at BBTS.com

Its no big surprise that he's half painted, but its not too hard to fix. I used a GM47-Red- Gundammarker and was able to fill in the crest on the forehead and the stripes on the side of the shoulder armor. Still, a great figure, and good review !

OH THANK GOD, the blue thing comes off. That's ALL I needed to know about this toy. :3 Looks great.

It's as sleek as you can get. I love it.

Now, with Ultra Magnus, BH Optimus and Shockwave, now this.

I'm in love with TF's again.