The entire toy is made of hard ABS plastic. The LCD screen is protected by an additional plastic window over it.

Sliver rolls on four wheels beneath his feet and torso, and has a free-rotating jaw. Because of how he changes, his neck can flip upwards, and forearms can flip downwards. Ironically while his tail does have joints in the right place(s), it changes by splitting in half, so this really isn’t an option because one half of the tail will always still be there (unless you favor a little King Ghidora two-tail action). 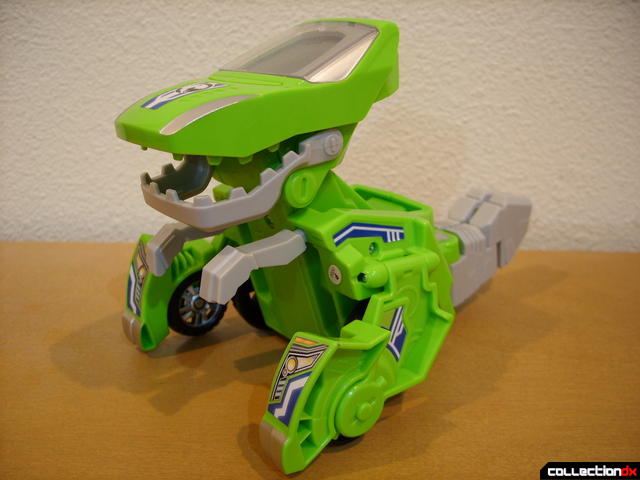 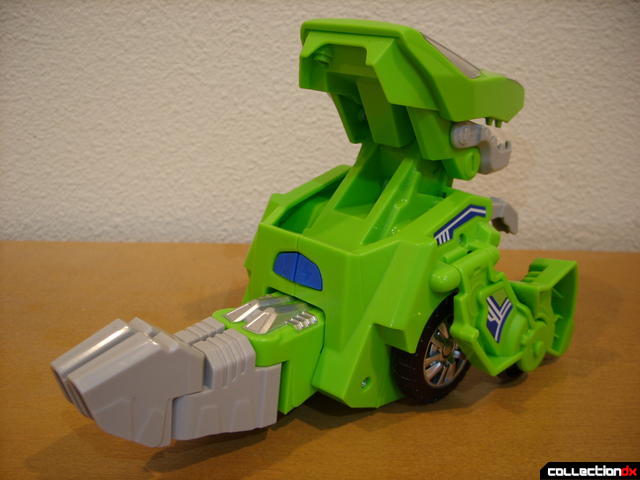 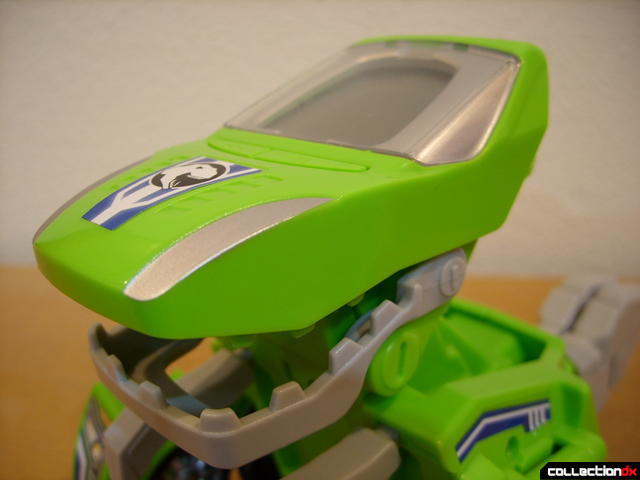 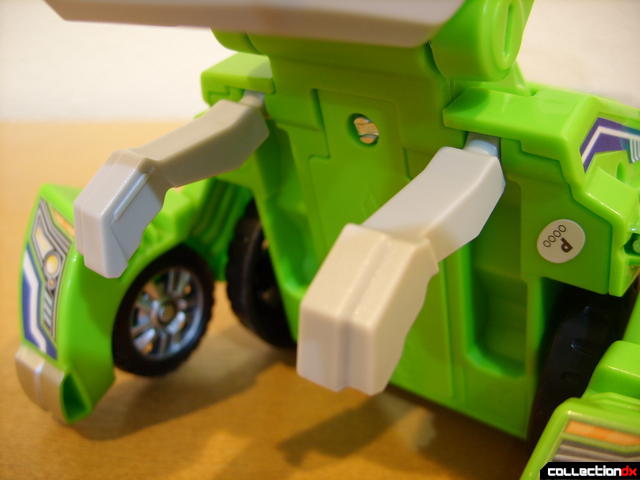 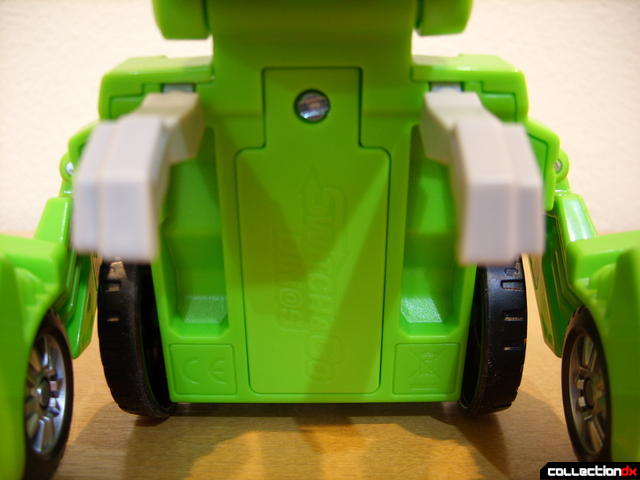 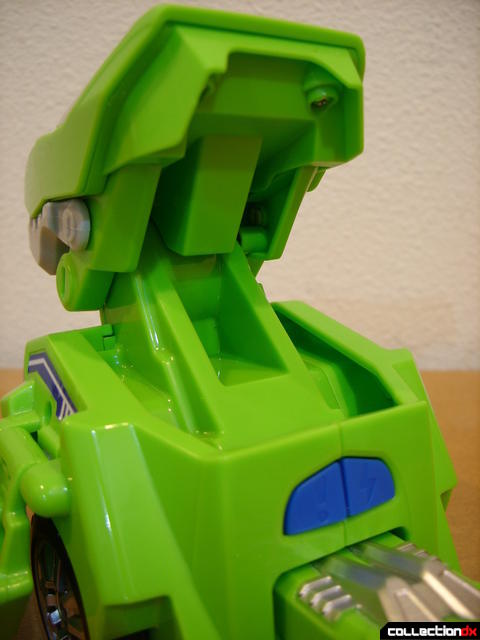 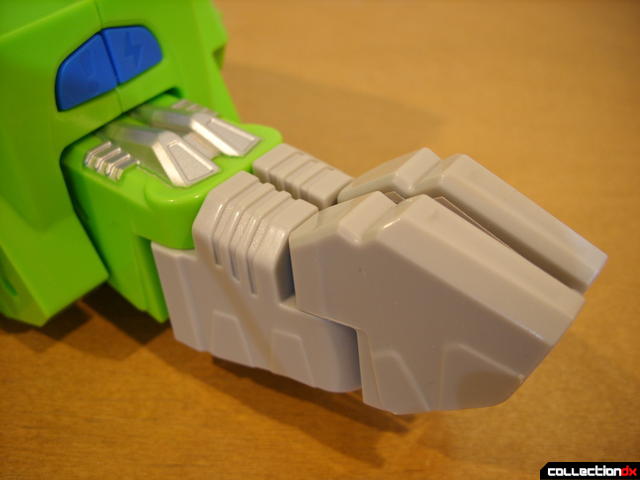 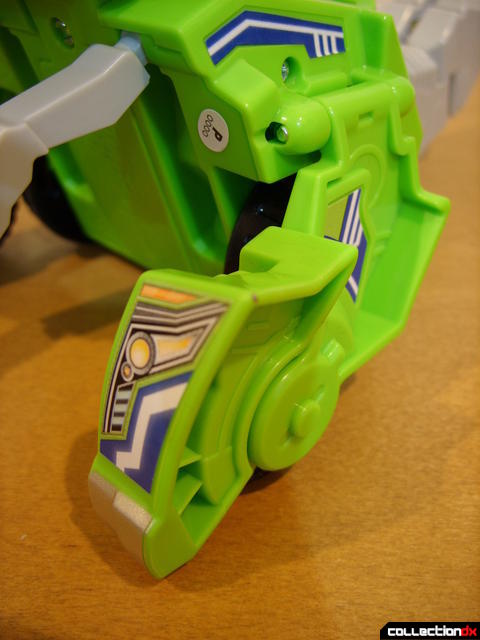 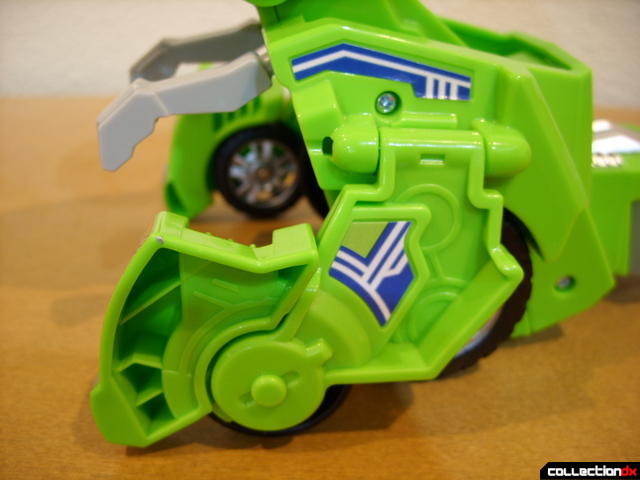 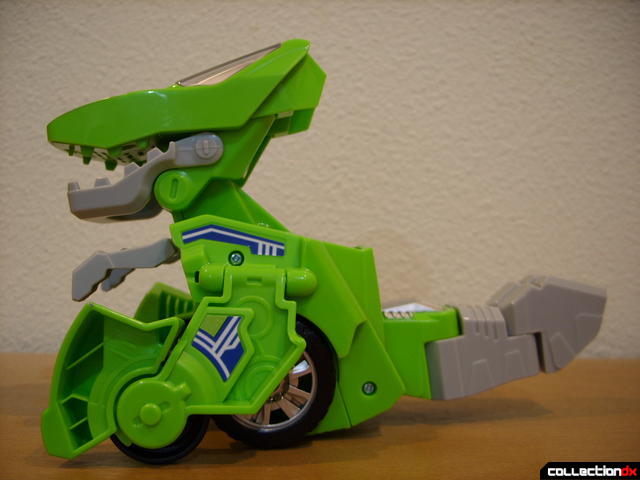 No parts of him move in this mode except for his freely-spinning wheels, though you can cheat a little and drop his jaw down a bit (though you won’t be able to roll him with his jaw down). 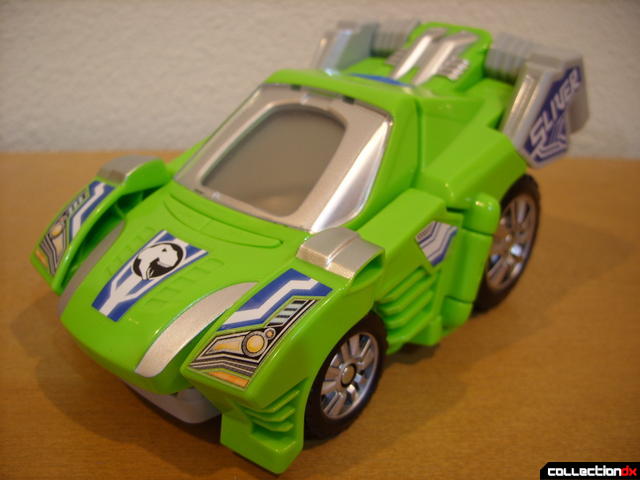 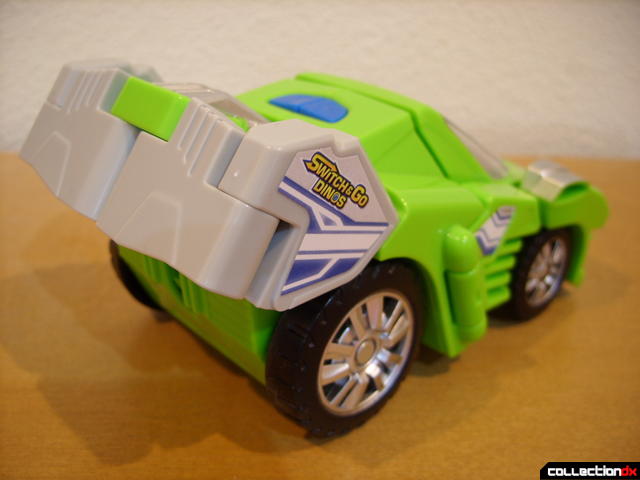 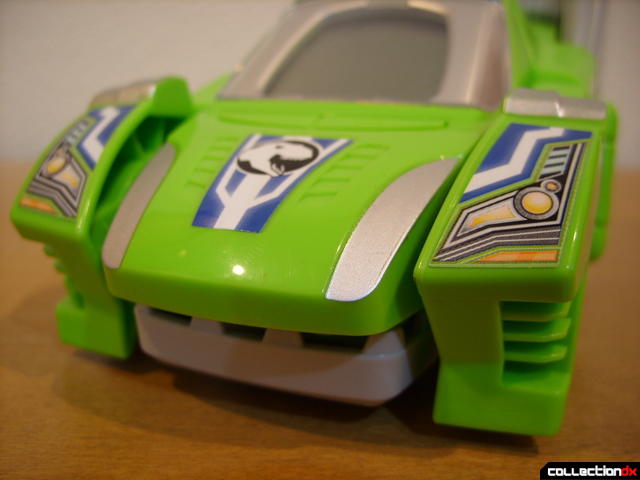 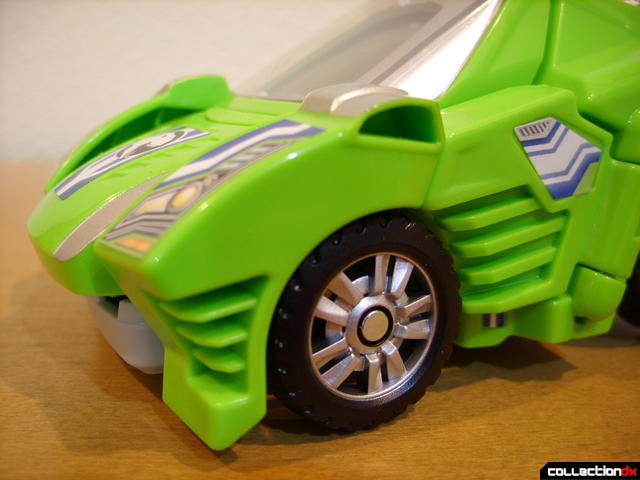 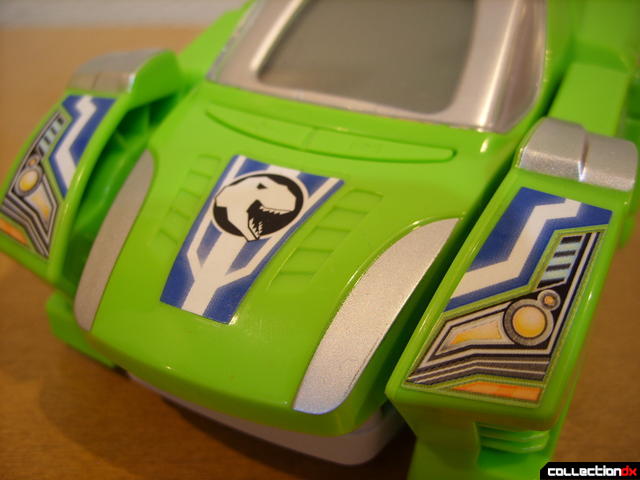 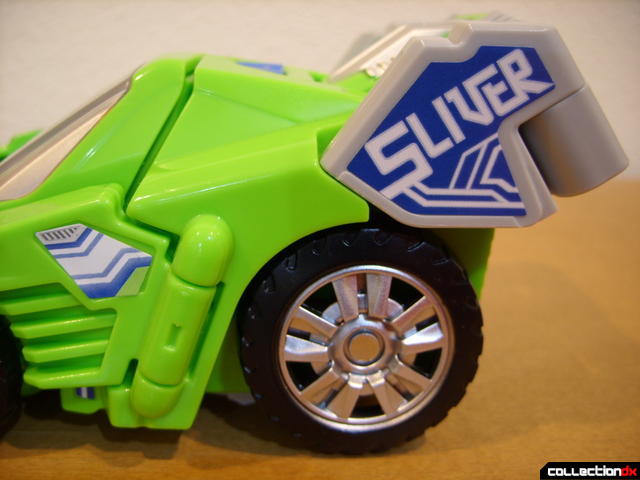 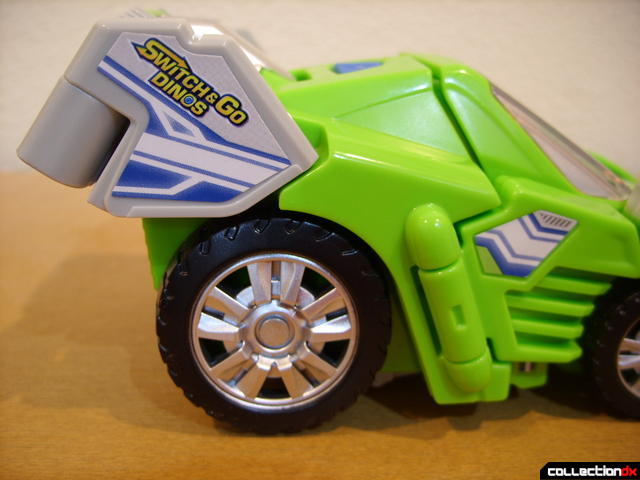 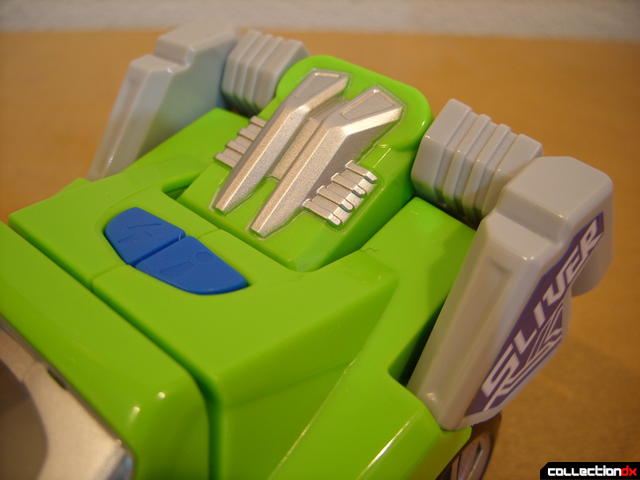 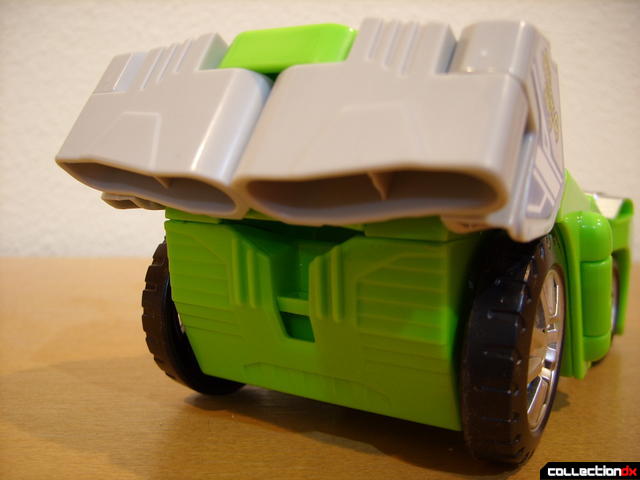 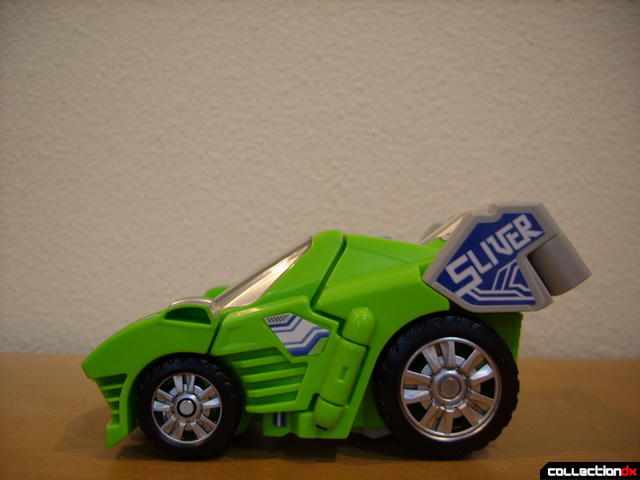 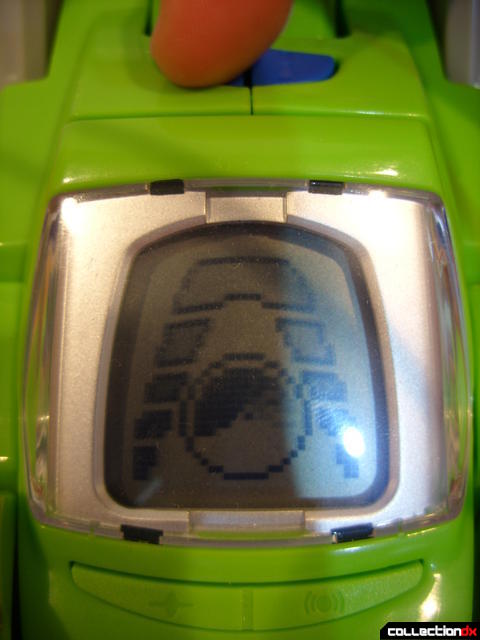 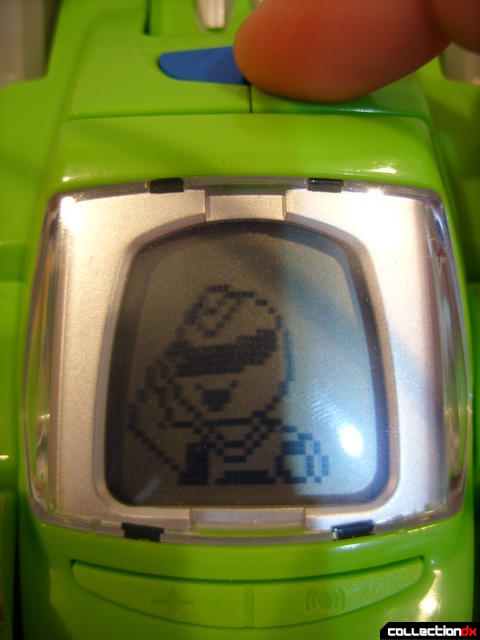 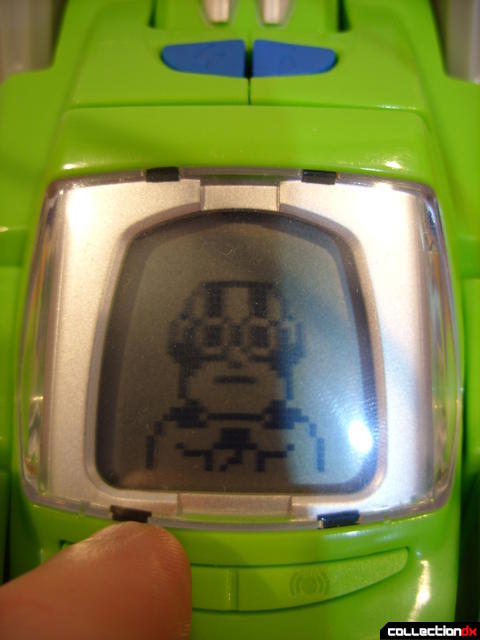 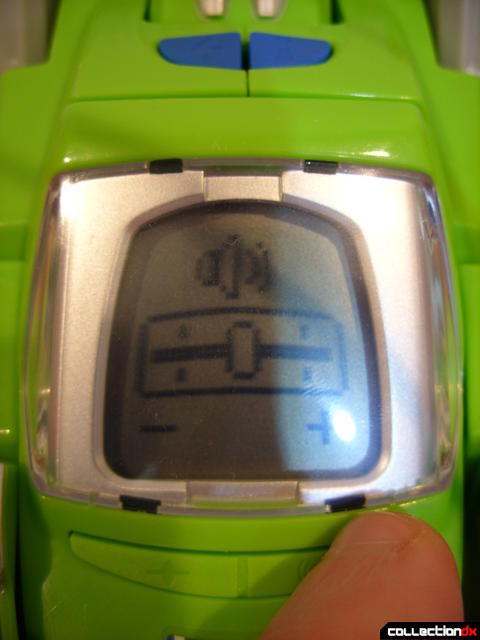 While pressing any of the four buttons will turn it on, if you hold down either the Sound or talk buttons for a few seconds, the battery will turn off. Additionally, if left alone for a minute, the toy will turn itself off automatically to preserve the battery.
If neglected, however, it will make some prompting noises (“Obey your King!”, animal sniffing, “This is my road!”, engine revving, etc) to remind you that it is still powered on.

Sliver is a ‘smart toy’, in that he knows which Mode he is in, and will react accordingly. When you convert him, the screen will flash and the eyes will swap for the driver (or vice versa).
Additionally, when you roll Sliver in Dino Mode, his eyes will bounce up-and-down and you will hear heavy footsteps. When in Vehicle Mode you will see objects fly past the driver and the engine will roar at high speed.

My motivations for picking up this toy were not that dissimilar from the first one I got, Tonn the Stegosaurus. I knew what I was getting myself into now, and really it boiled down to whether to get this one or Horns the Triceratops. This time around, however, instead of getting the one I couldn’t figure out how it transformed on sight, I instead went with the more complex converting toy. I just felt I needed a second one. So how did I come to choose this one over Horns? Simple: Sliver was funnier. 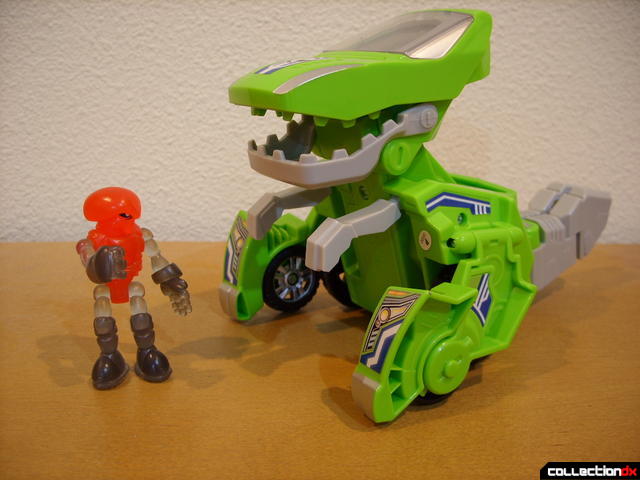 The personality has more bad-ass this time around, and doesn’t suffer from as much… what did Josh call it, “poochie”? This toy goes to the derp well sometimes too (“I’m fast, and furious!”, “I’m angry!”), but not as badly as Tonn did with the whole surfer “dude” persona. While this one speaks slowly, he’s not perceptibly stupid, and he does it with a growl that isn’t entirely over-the-top. As the resident predator of the Switch & Go Dinos line, he speaks like it- “Obey your king!”, “Cower in fear!”, and “Rub my feet! Massage my tail!” are among some of my favorite lines, though he does sound awkwardly dominating sometimes.

The multi-step transformation is more complex this time around, but still well within the realm of a child’s problem solving abilities. …Except for maybe the feet, which are kind of tricky to figure out the first time because it doesn’t look like they should change at all. The forelimbs flip up and down fine, but it’s difficult to get them out of their respective slots without fingernails or some serious pinching. 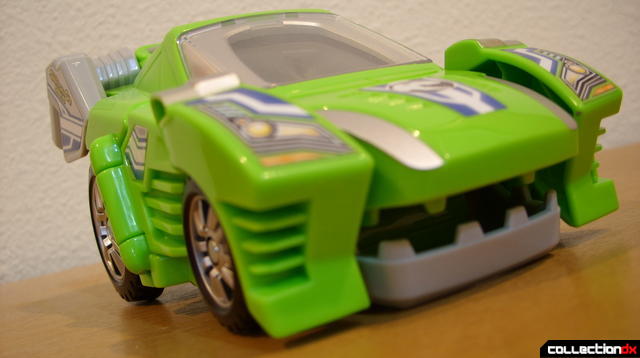 Now, I know these Dino Modes are a bit distorted proportionately, and that’s fine. But I don’t recall a Tyrannosaurus rex’s skull being quite that flat. It’s like his eye sockets are reclining a bit for a nap in the sun. Additionally, his jaw doesn’t have nearly the range of motion that Tonn’s did, and t-rexes are well known for their gapping maws. (To be fair though, the vehicle mode does have a mouth instead of an intake grille as a result, so that’s funny.) And despite his long tail and wide stance, I’m surprised this guy can keep his balance as well as he does because the wheels are really close together.
Honestly, I’m surprised they called this one a Tyrannosaurus rex, because it doesn’t really look like one all that much… even a baby t-rex sitting on its butt, which this one very much looks like. (With some very careful positioning, the toy can be posed with his legs under him and his body straightened out a bit in the classic standing posture, though this is obviously not in the instructions.) 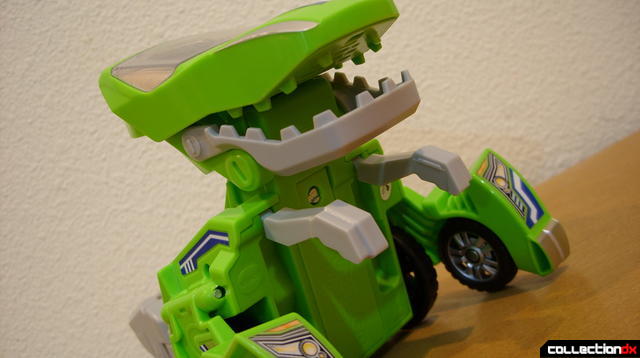 While keeping all the buttons close to the LCD screen was very good on Tonn, the two main sound-activating buttons are placed on his back, and whenever I pick him up I often accidentally turn him on. But if the buttons had remained around his head, I imagine it would have looked more like a parasaurolophus. Maybe they could have put all four buttons across the top of his muzzle instead…?

This toy is way too cute to be the purported King of the Dinosaurs. (My mother, upon first examination, said it was “freaking cute”.) I’m honestly surprised VTech didn’t try to make the T-rex a bigger toy. But the vehicle mode’s front has a decent imitation of a wide-mouthed snake or a hammerhead shark. (I wonder if that was intentional…?) Though not a strong representation of its 65million year-old predecessor in the visual sense, Switch & Go Dinos’ Sliver the T-Rex is nonetheless an adorable and smart toy for the 3-8year demographic it aims for.

I thought I had grown up during the 90s because beast wars left me thinking that I didn't care about toys anymore. That's because a robot is only so because it is shaped like a living form either animal or humanoid. You can't have two robot forms in one transforming toy. It could only look like Adam power or worse. Transformers has had correct animal transformers from ravage to hatchet but they've never realized why those where more popular. This could have been a successful subline where it would have seemed like a new idea. Better than oversized clown guns for the billionth time. Thet don't even look right with GI joes, fire that guy! Anyway, I'm glad someone is doing it. Maybe the dinos are done now I want a jet to horse figure.