This figure was provided by Playmates.

Growing up, I can scarcely remember a time when there were no heroes in a half-shell having adventures on television and on the big screen. It's been a long time since the Teenage Mutant Ninja Turtles had a big budget live action film, and with their return to the silver screen comes with some changes. In the upcoming film, the Turtles eternal adversary is no longer just a just a ninja crossed with a cutlery store. The Shredder has gotten the modern movie update as his samurai suit is a bit more mechanical and powered armor-y. Let's take a look at the new Ninja Turtles version of this classic villain. 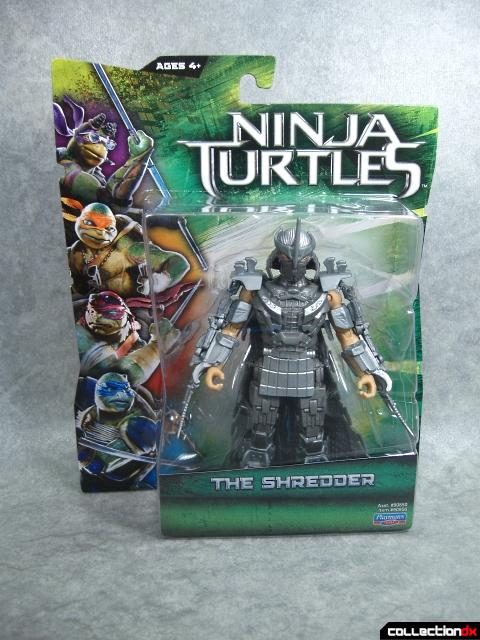 Here is the the Shredder in his packaging. Pretty standard movie tie-in fare. Inside the bubble, the figure is secured with a single plastic twist tie. 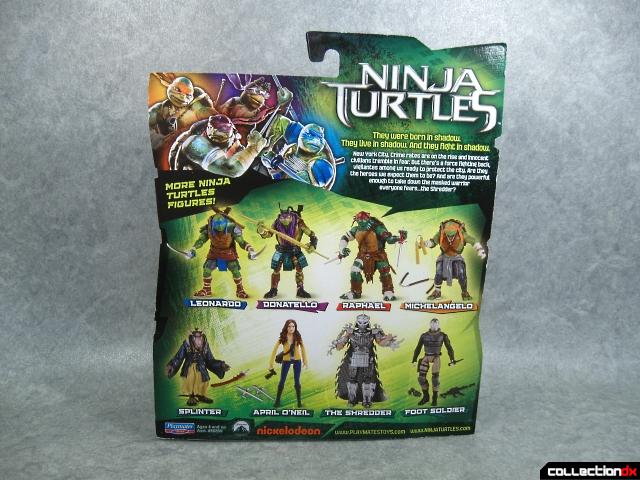 The back of the card shows off some more toys. I was thinking about showing a close up of the Splinter but I'd rather our young readers not have nightmares. 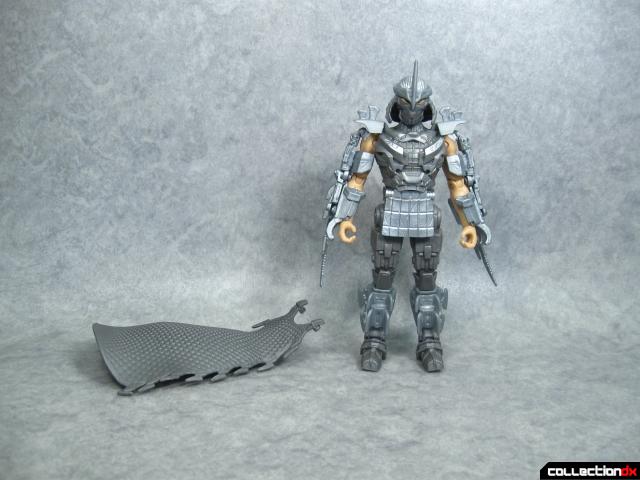 Once the figure is removed from his package you are greeted with his singular accessory: a large soft PVC cape. We will get to this in a bit. 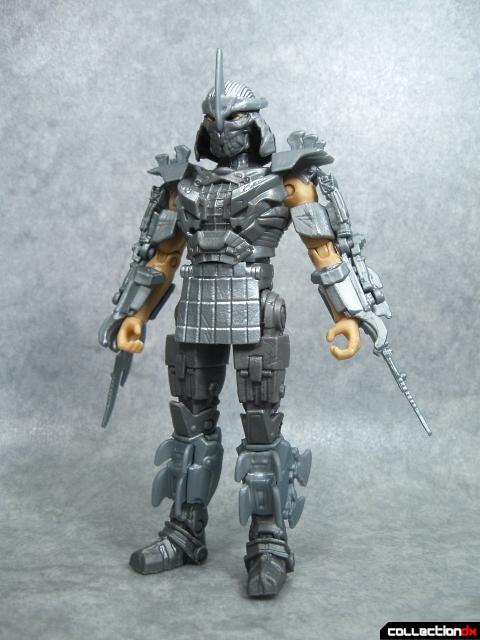 The Shredder stands about six inches tall with an extra half inch from the crest on his helmet. He is mostly soft PVC with some ABS parts stuck on. Overall the colors on this figure are kind of dull and not very well matched between the different types of plastic used in his construction. The familiar look of The Shredder is maintained in this incarnation but with a heavy dose of Whiplash from Iron Man 2 thrown in. 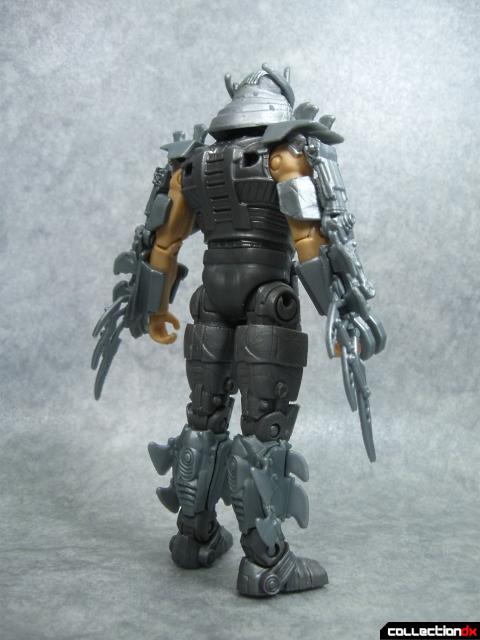 From front to back he is a modern armored movie super villain. His cape pegs in at the two holes near his shoulder blades. 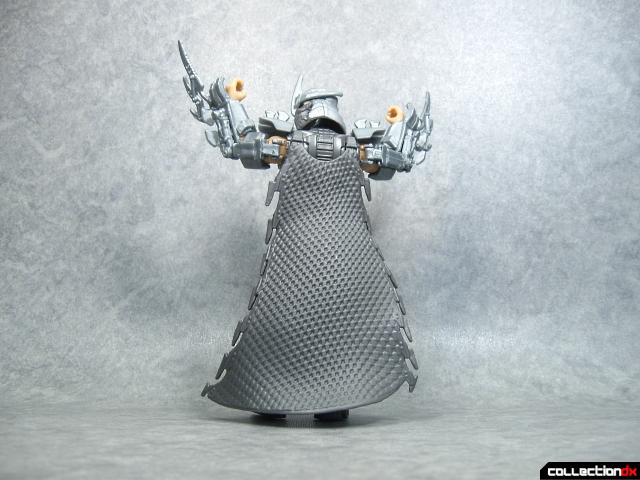 With his cape attached, The Shredder starts to look more like the leader of a powerful legion of soldiers. This symbol of swag and power has some sharp spines along the edges and is styled like it's made from chain mail. Once attached, it is nice and secure on The Shredder's back. 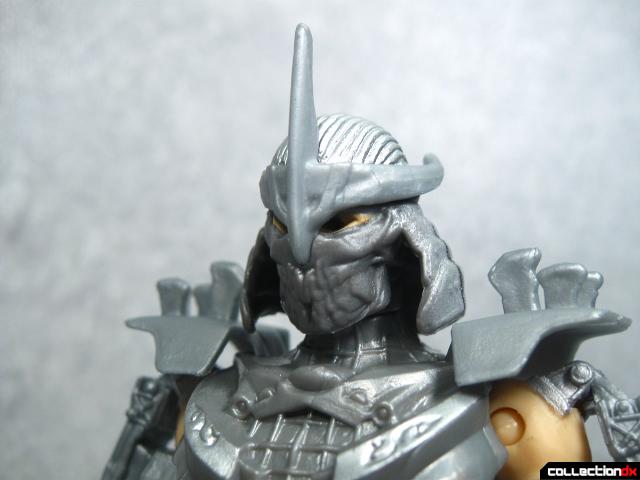 The Shredder's helmet is a cool design but looks rather mushy on this toy. Probably the strangest thing about this toy is how he has streaks of flesh colored paint applied inside the inhuman eye sockets. It doesn't really look like there's a person behind the mask as there's just two black pits that stand in for proper eyes. 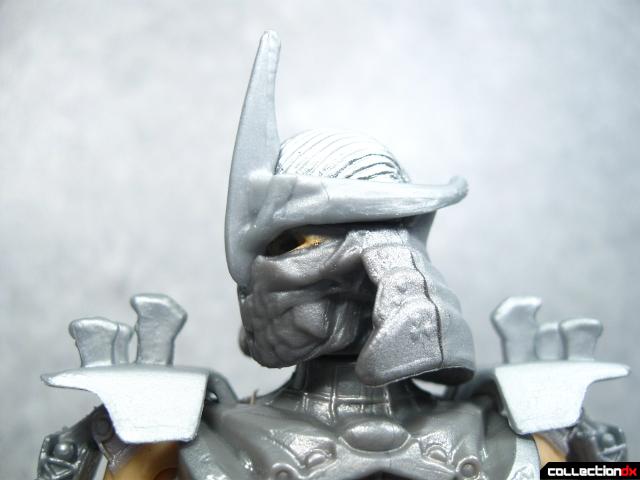 He has a little extra silver paint atop his cranial cover to bring out the detailing. The Shredder can look left or right as his head rotates a full 360 degrees. 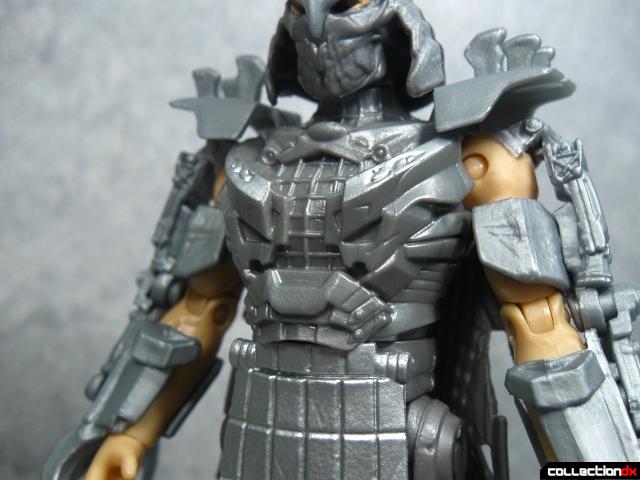 Detailing on the rest of the figure is alright and looks reasonably accurate to the brief snippets we've seen of the on screen design. The big silver front skirt is made of really soft plastic so it can move with the legs. 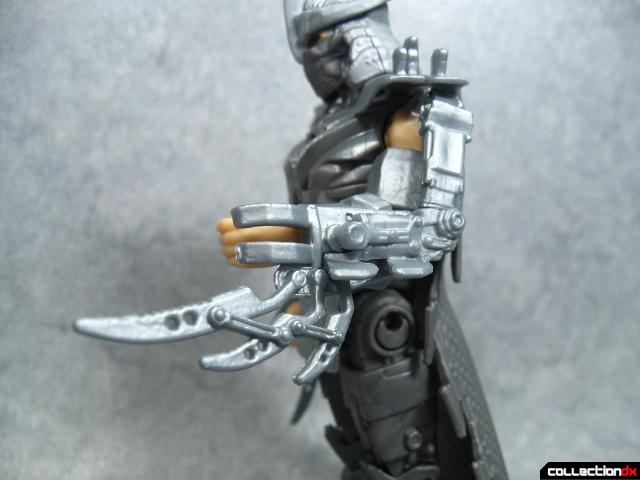 To add to the powered suit motif, The Shredder has a pair of strength enhancing armatures as part of his blade tipped gauntlets. While it is neat how they flex with his elbows, the trade off is this villain lacks a bicep swivel which most of the Turtle figures appear to posses. The Shredder does have rotating wrists but without something to hold, all he can do is gesture a bit more. 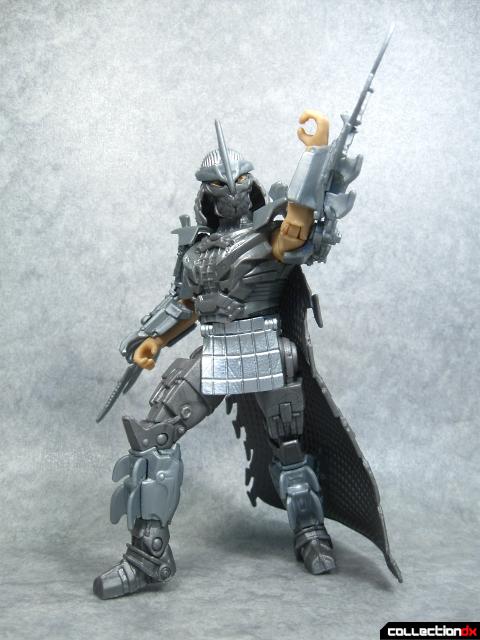 Still, he can do a few cool poses. His arms and legs are pretty basic as is expected with a mass-market toy of this type. The Shredder has a pair of universal joints for his hips which are somewhat impeded by the front skirt. You can tilt his ankles up and down but there is no sideways motion. However, I will give this figure some props for the free-moving waist joint. 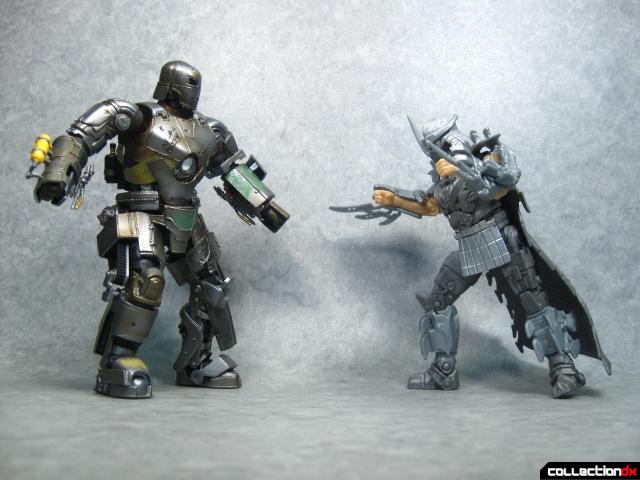 And at the very least he can square off with other armored opponents. 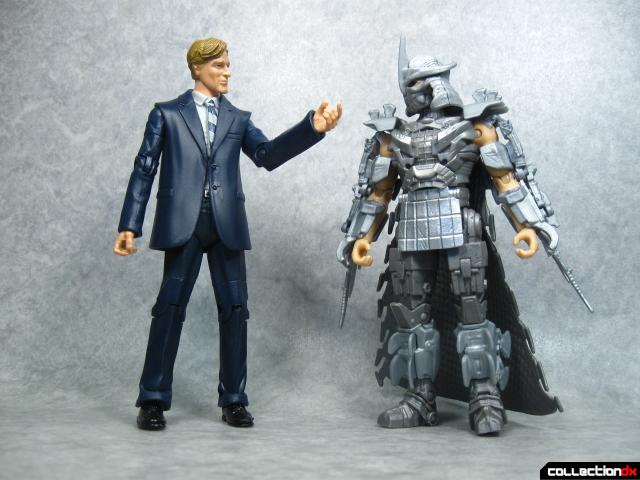 Or The Shredder can hang out with his friend Aaron Eckhart. 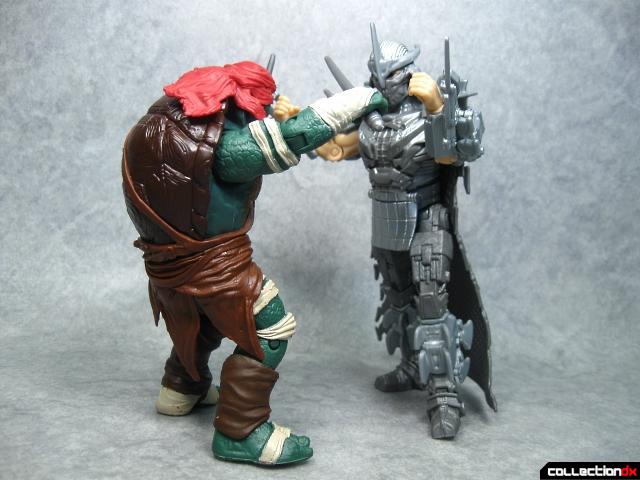 The Shredder makes a decent opponent for the Ninja Turtles but doesn't seem quite as imposing as he should be. 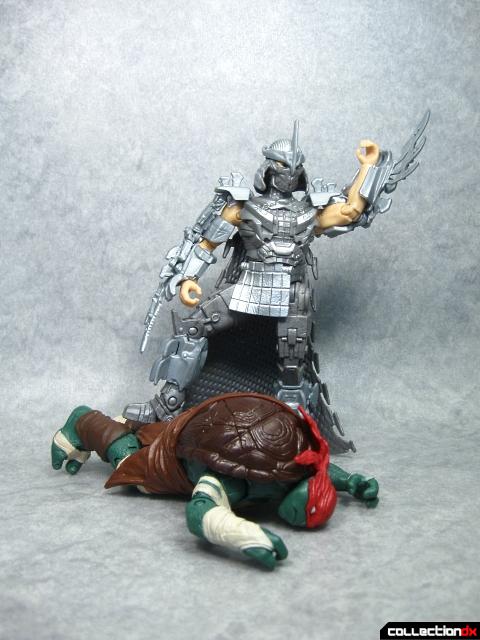 Overall The Shredder is underwhelming. He doesn't have the same bulk as the Turtles nor does he feel quite as menacing the way an armored warrior should. Despite wielding a nasty set of pruning sheers, This Shredder looks more like one of the goons with the boss's outfit than the big cheese. If your new movie Turtles need something to fight then this figure is decent filler. It makes me wonder if there will be a more elaborate deluxe Shredder down the line after the movie is released and this is just to wet the appetite.

Stay tuned as I take a closer look at one the main Ninja Turtles with everyone's favorite bad boy, Raphael.

And thanks again to Playmates for the sample Shredder.

2 comments posted
"The Shredder has a pair of

"The Shredder has a pair of strength enhancing armatures as part of his blade tipped gauntlets. While it is neat how they flex with his elbows..."

How does this work? I can't tell from the photos.

They have a hinge that's aligned with his elbow joints.