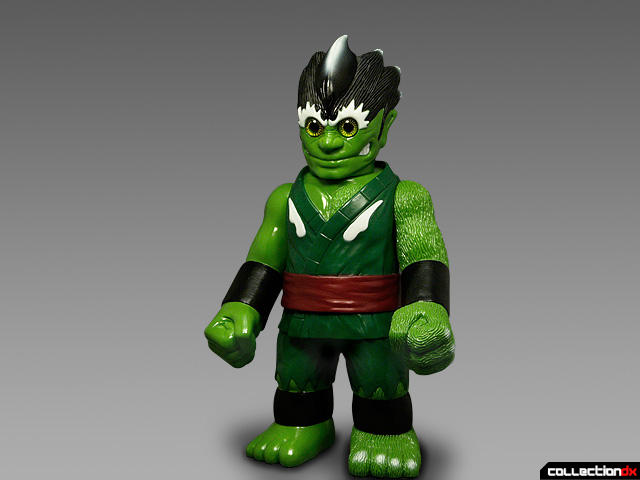 Shinto-San is one of the larger RealXHead figures coming in at an impressive 9.5 inches in height, beyond looking like a combination of a Teenage Mutant Ninja Turtle, Troll Doll and Goku and looking like he’s ready for a fight of some sort, I really don’t know if there’s a back story to this character. I would like to image that there would be something, but information is pretty scarce. 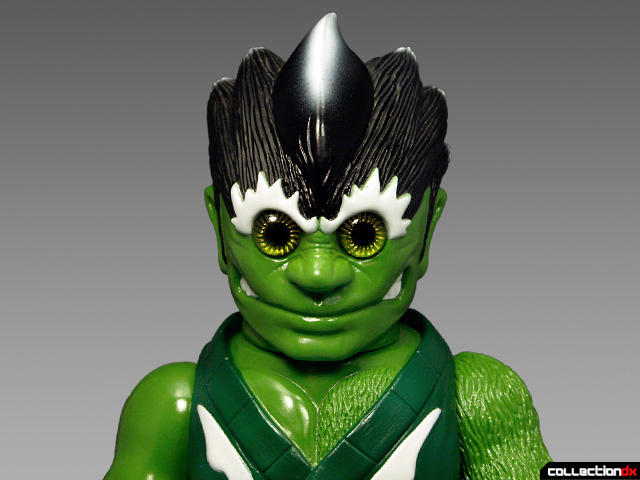 As mentioned above Shinto-San looks like a Teenage Mutant Ninja Turtle, Troll Doll and Goku all mixed together, this doesn’t surprise me too much as Mori Katsura is meant to be a big fan of the original Teenage Mutant Ninja Turtles. The sculpting is nice and crisp with Shinto-San having the left side of his body nice and smooth and the right side having a fur like texture over it. The gi also has some great folds and wrinkles. The stand out is definitely the head sculpt, he’s got the classic turtle’s gritted mouth going on and the green head really drives that home. Also the work on the hair is excellent too and it looks really impressive; Shinto-San has one hell of a hairdo on top of his head! Like other Real Head toys he has the doll eyes which look great. If I were to nit-pick, it would be that I wish that Shinto-San could have had a green colour to match his skin. 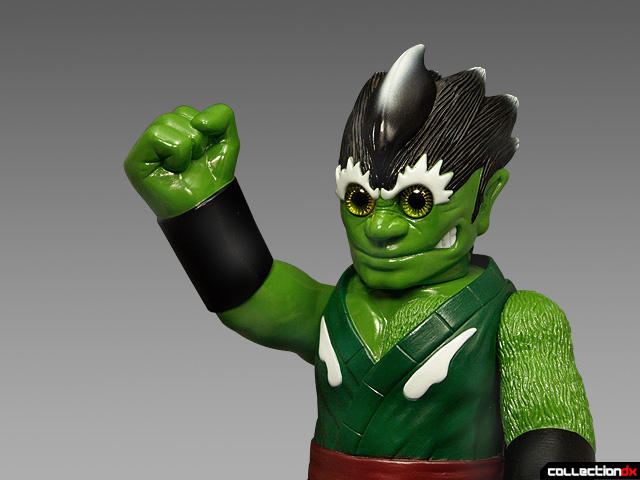 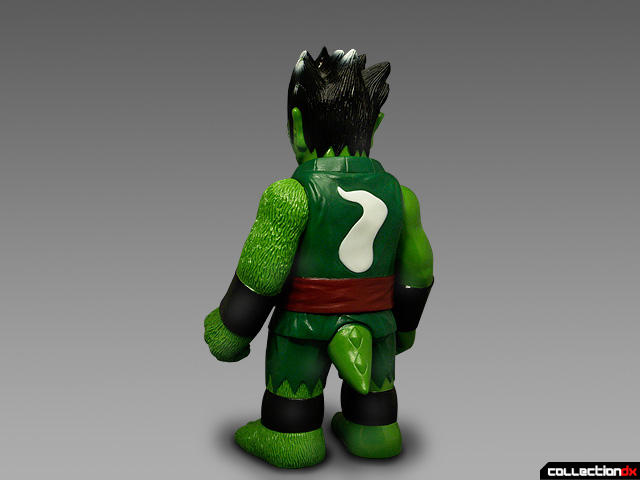 Shinto-San is mainly green vinyl with paint added to his clothes and hair, his gi is dark green with a red belt and his hand and leg wraps are black along with his hair. There is white added to his gi and hair too. I don’t mind the choice of colour pallet used here, but it’s really bordering on too much green, even if the tones are different, it almost makes Shinto San one big green blob. The black and red do a nice job to help break that green up and the white highlights on his hair and gi really contrast well. I also really like the green vinyl colour too. The paint application is excellent and very professionally done. I don’t see any issues with it at all. 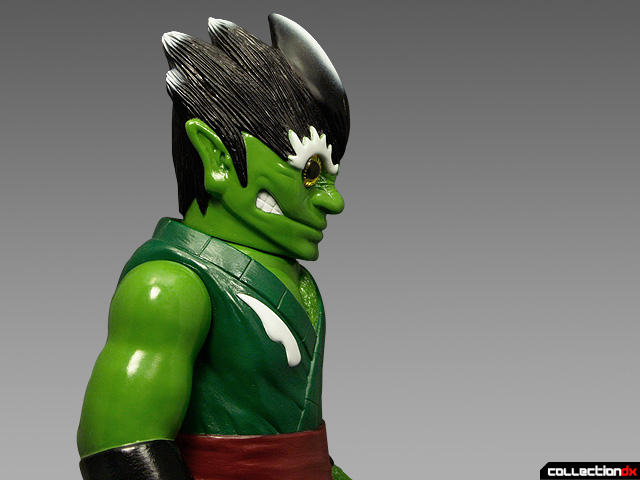 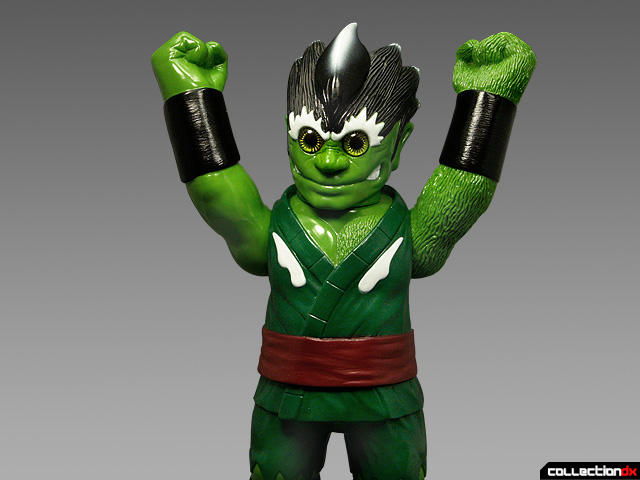 Articulation on Shinto-San isn’t too bad; you can rotate the head, arms and waist 360 degrees without much trouble. The waist is a little stiffer however, so it can be a bit harder to move it. You can get a few decent poses out of him and as he appears to be some kind of fighter, most of those poses involve using his fists. I enjoyed playing around with him while taking the photos, so even with the small amount of articulation; it’s still a very enjoyable figure. 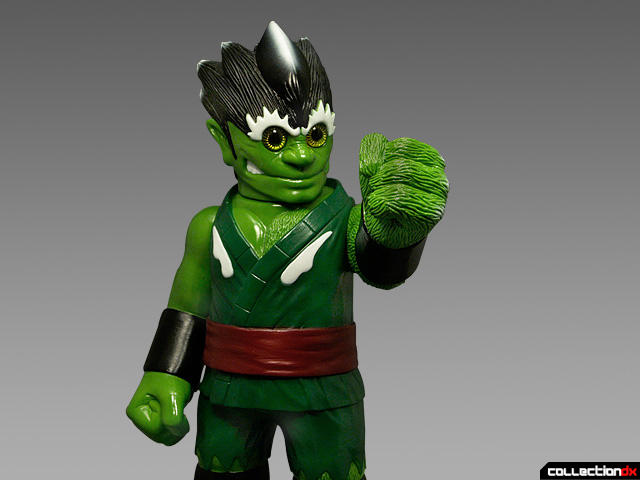 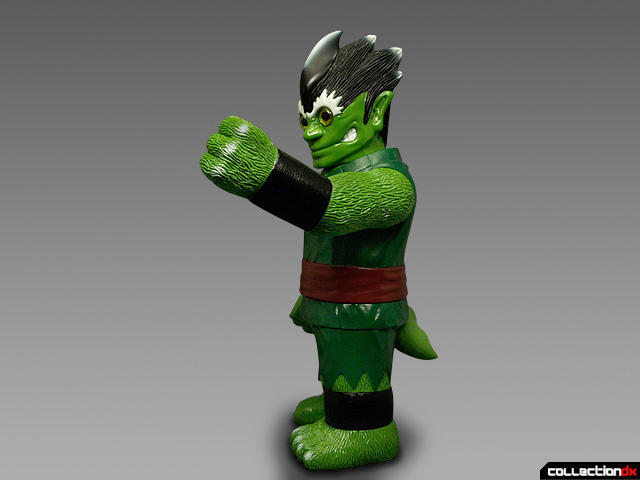 I found this Shinto-San down in Osaka of all places (considered not the best place for buying Sofubi these days) being sold in G-One Position Capsule in Den Den Town, for slightly less than original retail price. Much like my previous Pheyaos review, it was during my most recent toy hunting trip to Japan. You can get Shinto-San online somewhat easily, but as for finding him even in Japan? Good luck! He seems pretty hard to come by, but the hard part isn’t finding one, it’s finding one in a colourway you like. I think patience and perhaps a Yahoo Auctions Japan bidding service can always help. If you can find a Shinto-San you like, I would highly recommend picking one up as he’s a very large figure and he towers over all the other Real Head figures I have - that and having a pretty awesome sculpt make Shinto-San all right in my book! 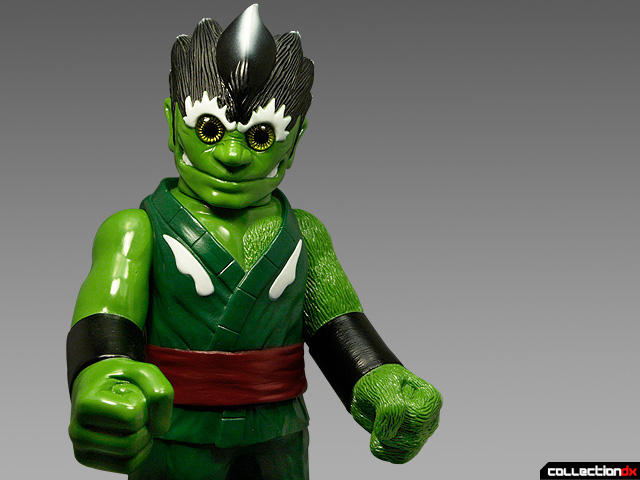