To date, the robots had not concerned themselves much with sneaking about. They had eyes in the skies with their over-powered Sonic Phantom and flame-throwing Fire Vulture, and that was enough. They could cover the hundreds of feet to the opposite side of Sentai Mountain’s chasm easily enough for reconnaissance missions. But they were usually intercepted by Exo-Force before they could make it back. And putting a Battle Machine’s back to danger was a sure way of getting destroyed! And a fast getaway meant needing a fast engine that made a lot of noise and heat; things easily detected by anyone. So that meant moving slowly. But a slow target was still a target, right? The Shadow Crawler answers both of those questions. Coated in a special radar-absorbing compound material, it actually reduces its detection range to Exo-Force sensors by more than half! But it doesn’t stop there. With a Devastator at its controls, it is also a smart Battle Machine. It avoids confrontation by using the three powerful grasping claws on its tripod body to climb underneath the bridges spanning the mountain chasm, using them to shield their energy signatures! Then, once on the other side, they carefully move away from the bridge, slowly working their way up the vertical walls of Sentai Mountain. But if confronted, the Shadow Crawler has two ways to defend itself. It carries two weapon pods which mount a pair of long-range lasers and a pair of machine cannons, and it also has a disc launcher. But its most effective defense is a passive and devious device. When the robots took over half of Sentai Mountain, hundreds of humans were captured and held in huge prison blocks (Takeshi’s family among them). But with a near-unlimited number of human slaves, the evil Meca One commanded that all of the Shadow Crawlers be mounted with prisoner pods to carry those hostages with them! Exo-Force wouldn’t dare fire on one of their own kind! This allows a Shadow Crawler to be cautiously tracked, but never fired upon, while it completes its mission. 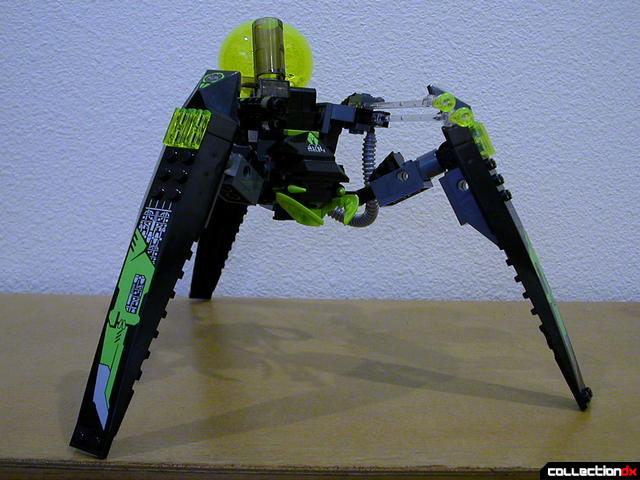 The Shadow Crawler (back) is devious and dangerous like the very-powerful Striking Venom is, but on a smaller scale. LEGO decided on a tripod assembly rather than four legs for its inhuman characteristic. All three legs are permanently tilted upwards at the fixed ‘hips joints’ to give it a slight crouching effect. The two front legs are slightly different from the single back leg. All three, however, have a single snap-rotation joint at the knee which allows them to twist to either side, or flex even further outwards. (Of note: the further out a leg is stretched, the less it can hold itself up, and the toy will collapse under its own weight.) The main body and head of the Battle Machine were kinda difficult to photograph, so when shooting the weapon pods, I removed the legs for a better view. The right weapon pod has two short black barrels for the machine cannons. The left weapon pod, however, uses two long, thin transparent parts that [I think] may be newly-designed parts. The right pod also has a flexible tube connected between it an the back leg for some reason. Both pods are attached to the body via ball-&-socket joints, which allow them to point upwards just beyond 90-degrees. Oh, yeah- and there’s that one-piece disc launcher again... (*sigh*) (I just keep the discs in a baggie in my desk along with all the others from last year’s sets. :D ) The prison pod is two transparent-green half-spheres that snap open as wide as 90-degrees. To make things interesting, a white LEGO minifig skeleton is included to set inside the pod! And when you pick up the toy, the skeleton’s arms are attached to small ball-&-socket joints and they flail about as it rolls around inside. Creepy!

Lego Set #8104 brings back the powerful-looking silver Devastator robot minifig. It returns with the transparent green plastic swirled into its torso like most of the previous sets from the 2006 line did (specifically, from the Sonic Phantom). For the eyes, a red #2 Technic bar is once more inserted into the back of the head. The hand claws also rotate at the wrist, and need to be attached. Normally, when a Lego set needs specific details on a part, such as a control panel or flag, the image is printed or painted directly onto specific parts. “Exo-Force” continues on by using stick-on decals; something that was rarely ever used in the past. There is a small sticker sheet which provides allegiance markings, warning symbols & notices, and names- some of them written in Japanese text! Unlike the human Exo-Force Battle Machines, the robots’ Battle Machines do not have human language markings on them. This allows for a wider range of piece marking without Lego having to create a completely different piece each time, and merges the “Exo-Force” and Japanese toy influence closer together. It does, however, have a small downside- because of the design of the decals, some of them cover places where other Lego pieces can go, which limits how a decal-applied piece can be used or taken apart. There are no conflicts in Set#8104. The common gimmick of the debut 2006 line was- aside from them all being giant robots (!)- the introduction of the LEGO light brick with clear fiber-optic cable, though this was seen through almost all of the sets. They also had instructions for building an alternate set with the same parts on their homepage. Alas, neither of these returns in 2007. Instead, LEGO brings us a pivotal part of the storyline: the EXO Codes. When entered into the computer in the Golden Tower, they allow the refugees inside the Golden City to access a special feature within the ancient technological fortress. Each 2007 “Exo-Force” sets has at least one exclusive EXO Code located on a flat 1x2 plate placed somewhere on the Battle Machine’s body. When entered into the Code Brick Central area of Exo-Force’s homepage, it gives you special access to new things online like exclusive background info on the set, stickers & wallpaper for your computer’s desktop, images to be used for real shirt iron-ons, IM avatars, and more! (Not to spoil anything, but the only really unique thing for each set you get access to is a 10-sec silent video clip of your set in action on the site!) 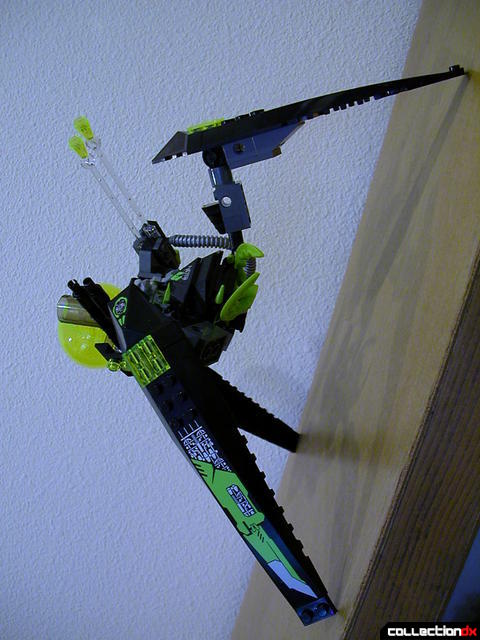 I’ll admit that I wasn’t wholly looking forward to getting one of these as it seemed kinda simple, but I was still interested in obtaining one. I thought that the prison pod with the skeleton was a nice psychological touch that shows just how inhuman and merciless the robots really are. The weapon pods were okay, though the long, transparent tubes for the ones on the left side were a nice touch. I suppose that we get enough two- and four-legged mecha, so a tripod was a nice change, though the decals on the front legs indicate that they would have had sharp talons with neon-green supports. What would have really made it good would have been if there were additional hip joints that could turn rather than always having it in a fixed crouching position. The far-larger Striking Venom from 2006- which this set seems to draw a strong influence from- suffered from the same problem despite its excellent design otherwise. To LEGO, I would say: give us the extra joints, and let us decide how to pose them; I’ll pay an extra $2-3 for that if need-be. As is, it’s quite limited in the range of motion with just knee joints, and with them always pointing outwards, it’s just that much more unstable when posing (as I pointed out earlier), the joints used just aren’t strong enough to hold it up if the legs are bent too far out. So, I recommend the Shadow Crawler as a so-so medium-sized set. 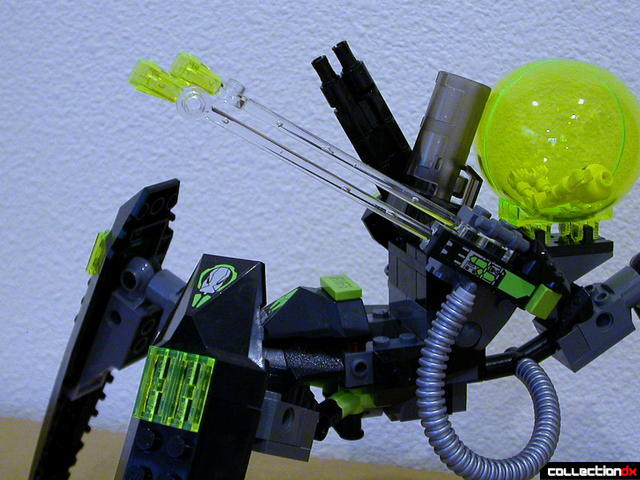 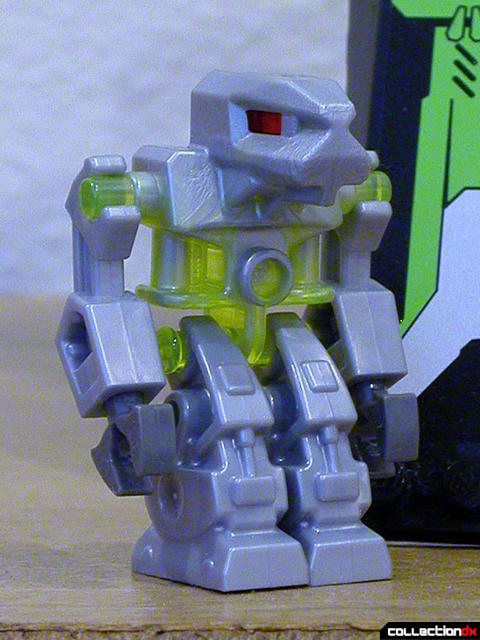 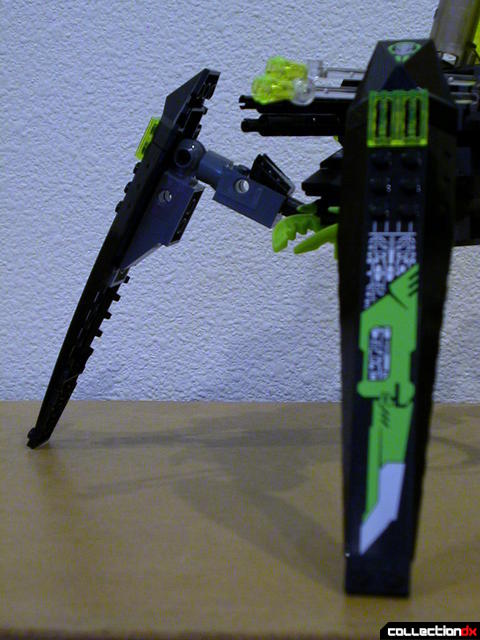 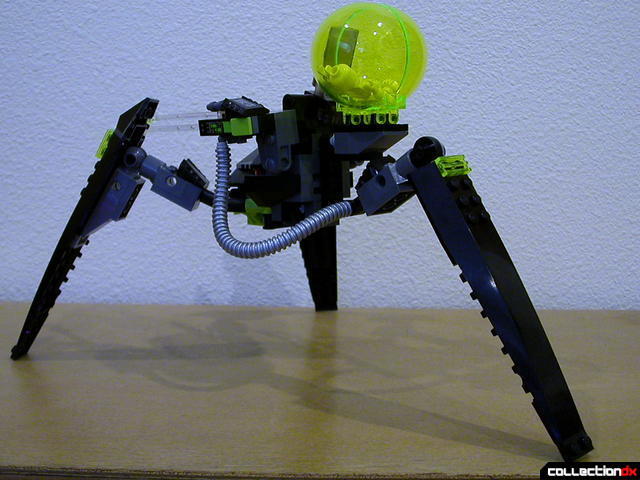 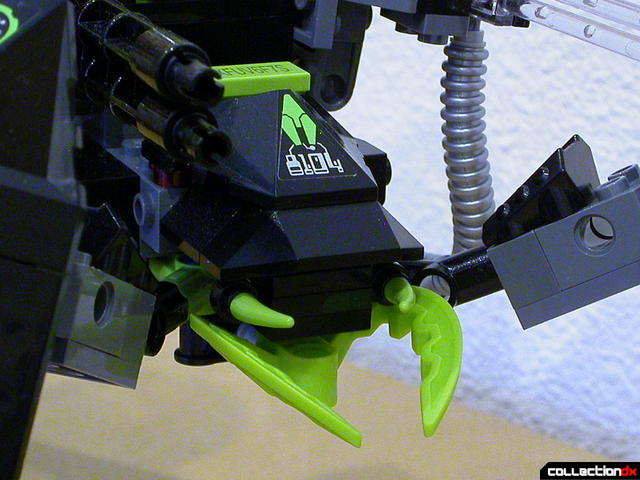 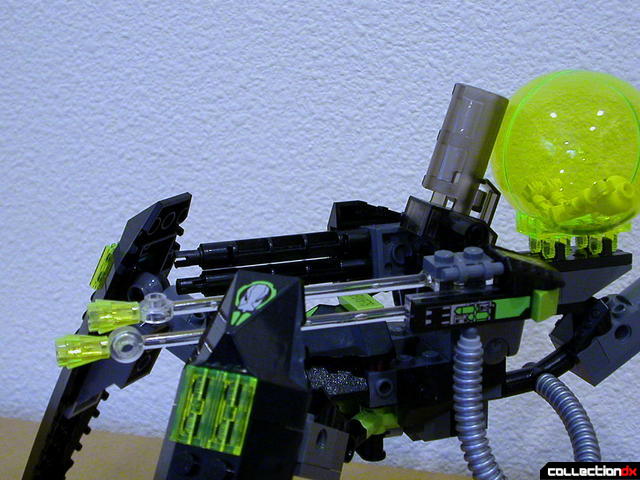 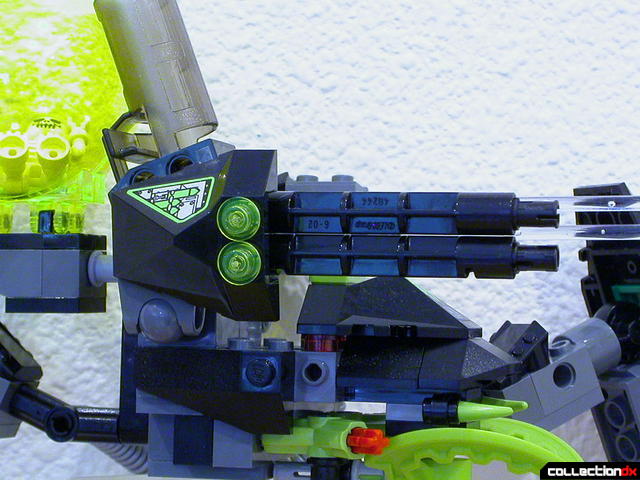 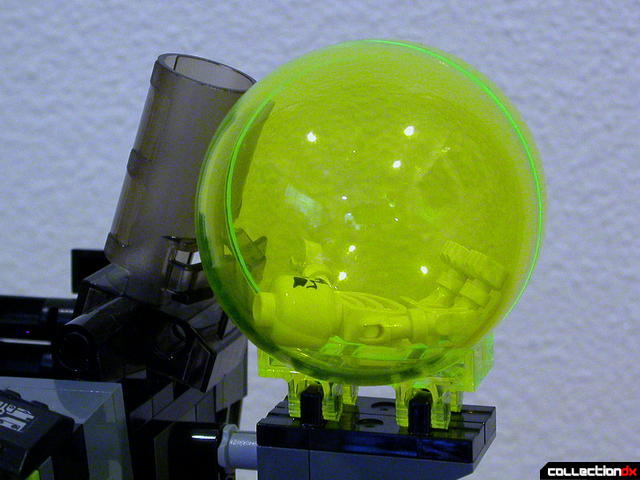 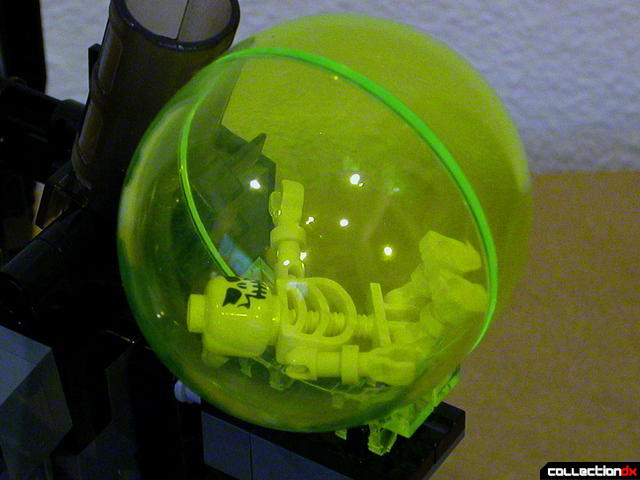 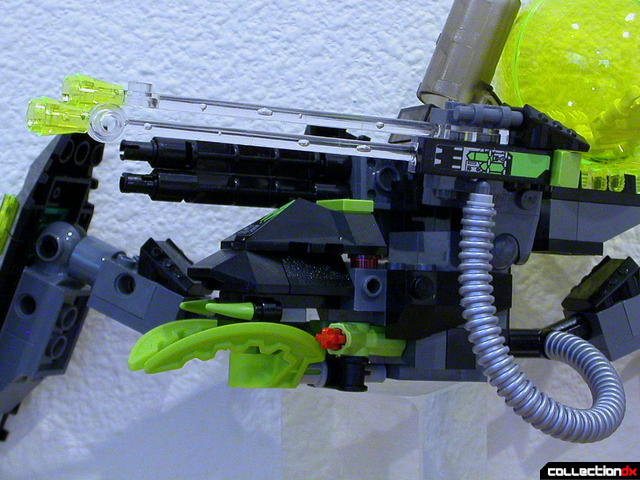 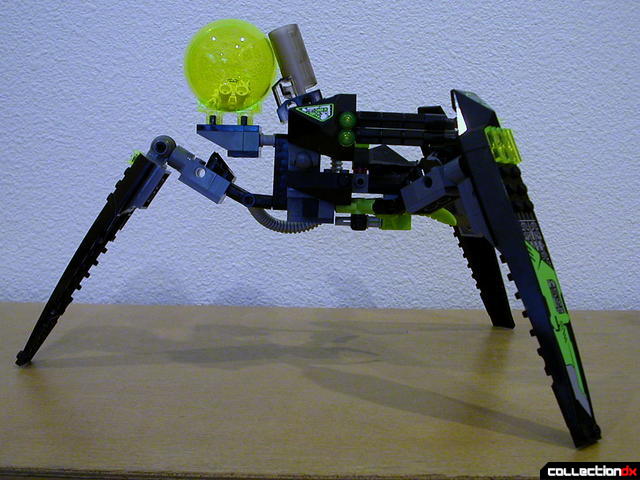 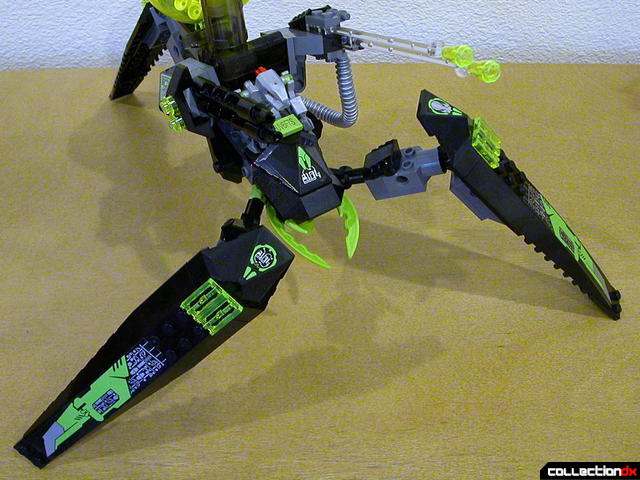 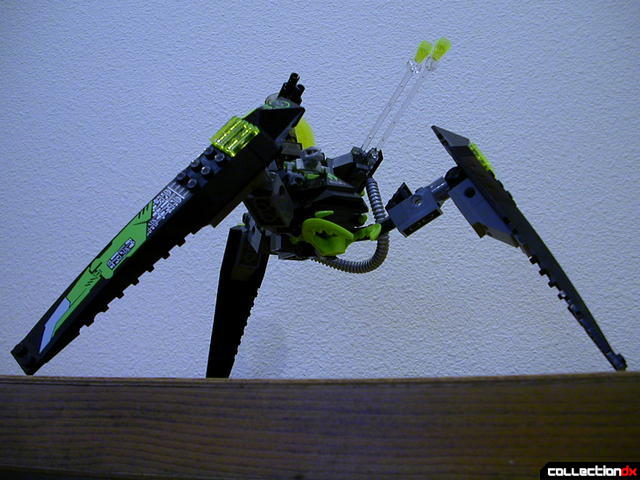 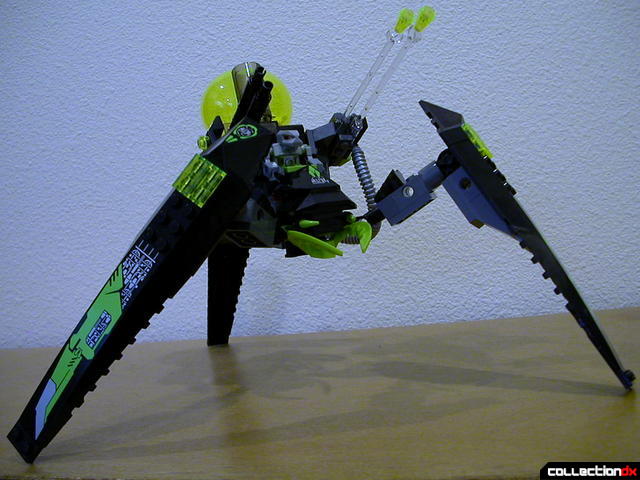