I have been a fan of the Aliens series, and the Xenomorph design in particular for a long, long time. When I saw the prototypes of Herocross's SD Style Alien, I was very excited for it. Unfortunately, the figure failed to live up to the hype. This figure comes packaged in a medium weight cardboard box with flap and window. The figure comes nicely packaged inside a full clam-shell. Also included in the box are an extra set of hands, a facehugger, a "drool" accessory, and a stand. 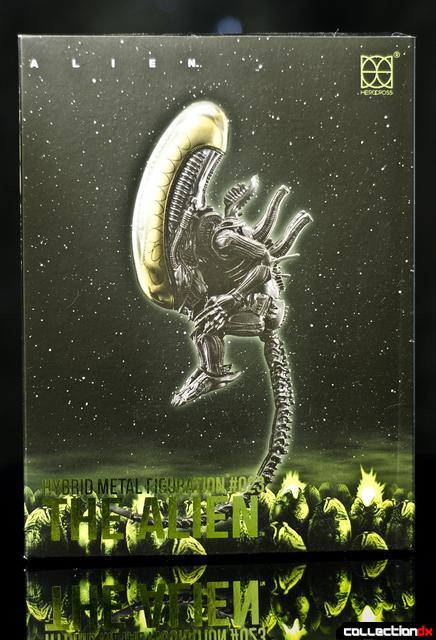 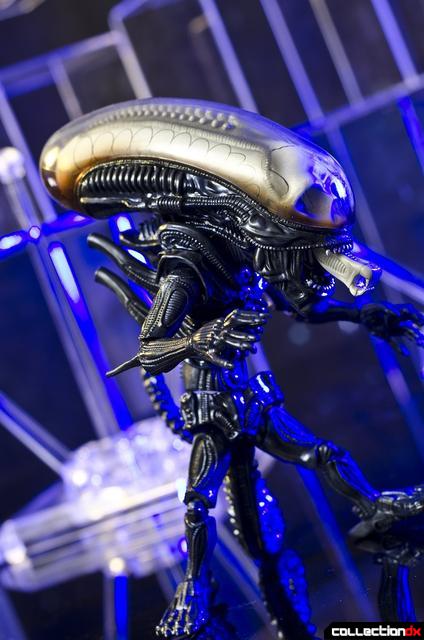 The first thing I noticed right out of the box is that the figure does not match the promotional materials. The promo pictures show a dark gray and black toy with a dark yellow tinted dome where as the actual toy is a dark metallic blue and only has light yellow highlights around the base of the dome. The biggest difference is in the tail though. The promo pictures show a segmented tail with what looks like ball joints similar to the tails on Bandai's Monsterarts aliens. What you actually get is a plastic bendy tail with wire insert akin to NECA's Aliens. 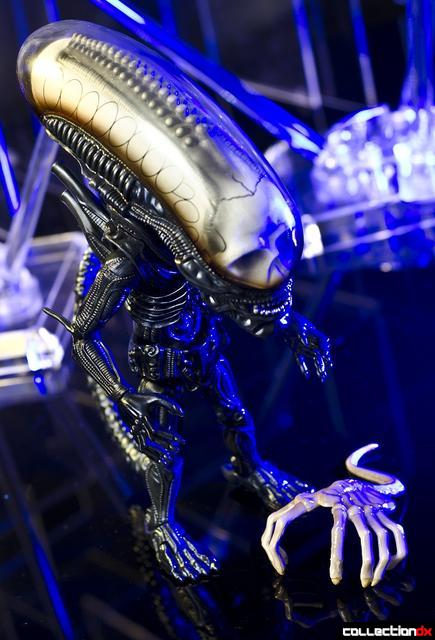 Articulation is a mixed bag. The arms and legs are both double jointed but mine were very loose, to the point where the toy had a hard time standing. The torso is on two ball joints, one in the chest, one at the waist, and again, both were very loose. Easy enough to tighten up, but at this price point, I shouldn't have to be fixing things right out of the box. One aspect of the waist articulation that I'm not thrilled about is that it leaves a rather large gap in back when the alien is posed crouched over. The head can move up and down a slight amount but there is no left or right movement. Other articulation includes ball jointed wrists, ankle rocker joints, ball jointed hips, and an articulated jaw with spring loaded, pop out inner jaw. 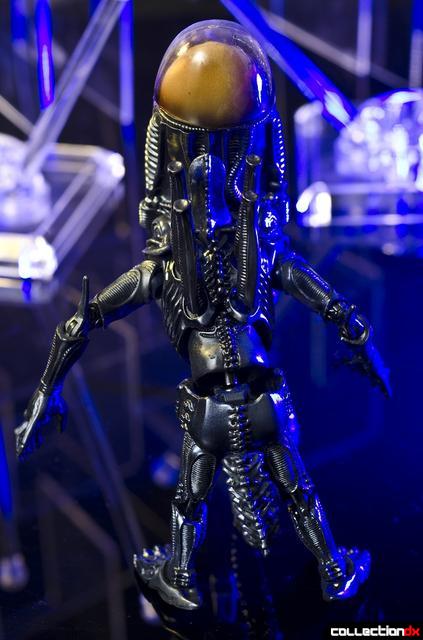 The toy is billed as mostly die cast, but in reality it's only about 20% diecast (neck, toes, dorsal fins). 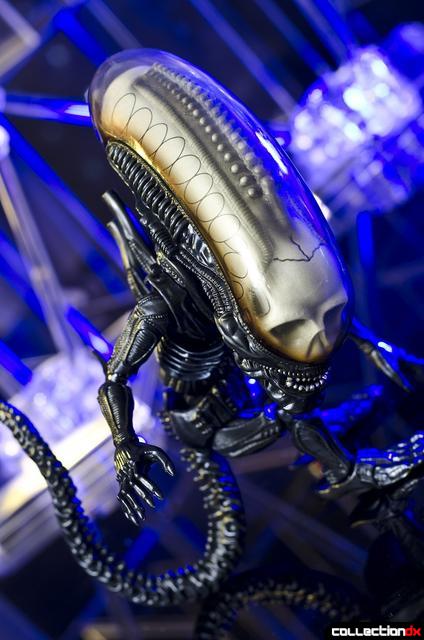 Unfortunately, mine came with more than a few issues. The inner jaw came installed upside down so that when you pressed the button to release the spring loaded inner jaw, it would hang up on the inside of the mouth and had to manually extracted. 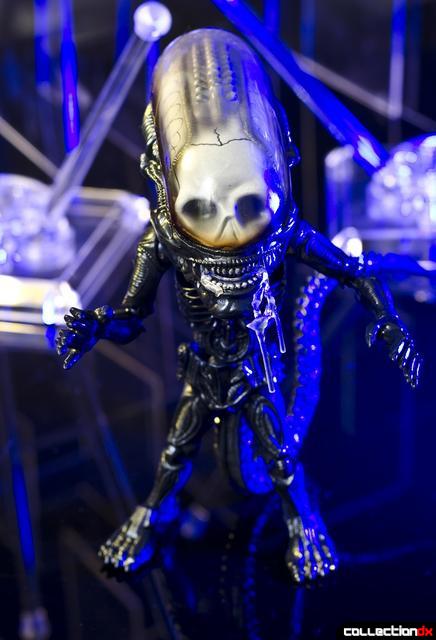 Both arms also came fused at the bicep swivel. I didn't even realize there as an issue with the joint until the arm fell off. Thankfully I purchased this from amazon and they have a bullet proof return and exchange policy. They had a new replacement figure out to me in 2 days. QC issues abound though. The new figures head fell off as soon as I took it out of the package. Not a deal breaker, looks like the factory glue just came loose, but again, not an issue I should be having on a $100+ figure. The new one has fused biceps as well and I have avoided using the joint so as not to break them again. 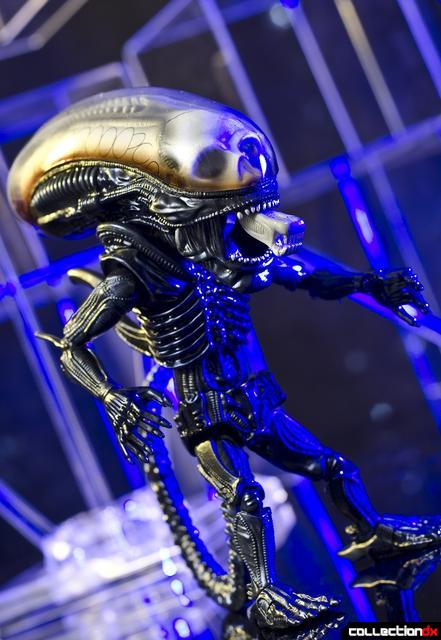 Accessories include a poorly painted facehugger with random white paint splotches and a drool accessory that came cracked and bent (on both the original and replacement). The toy also comes with a stand that can be used to mid air poses. The stand has a magnetic base that can be opened to store the extra hands and also gives it nice weight. 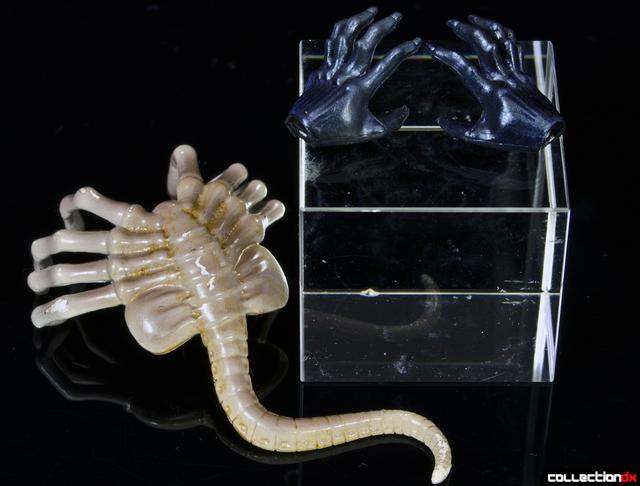 I really like the way the figure looks despite it not matching the promo pictures, but to be completely honest, it feels like a knock off a much nicer toy. I was really on the edge about sending it back to Amazon for a complete refund, but in the end I have decided to keep it. The articulation works well enough for my needs and it and really does look good standing in my Xeno collection. 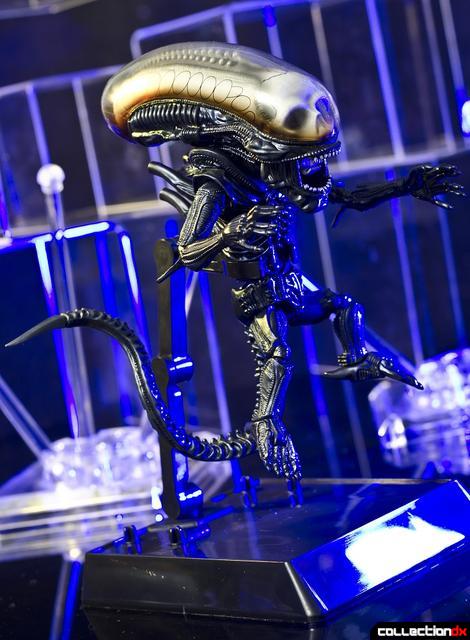