Scratch is one of the later Gobots releases, and he's interesting because he was never released in Japan or europe. (Although he does have a Machine Robo Number of (MR-T-41, Gobots number 38)

He's listed as a "Friendly Robot 4X4 Truck" on the card. His truck form looks like a 1984 Chevy Blazer. 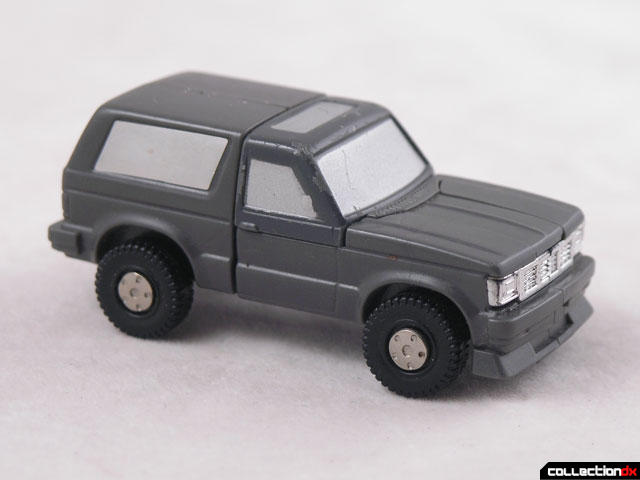 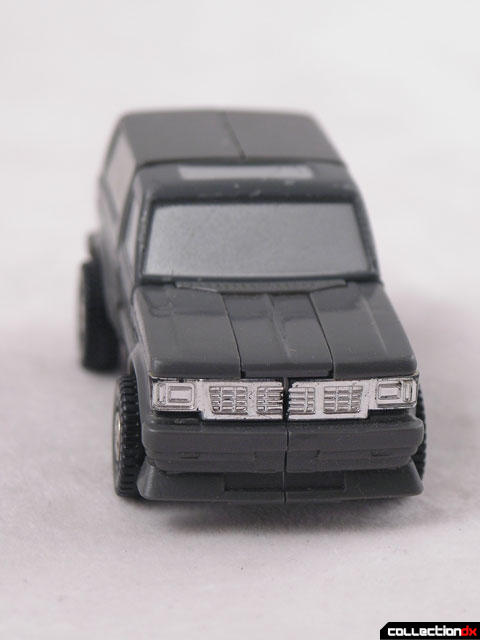 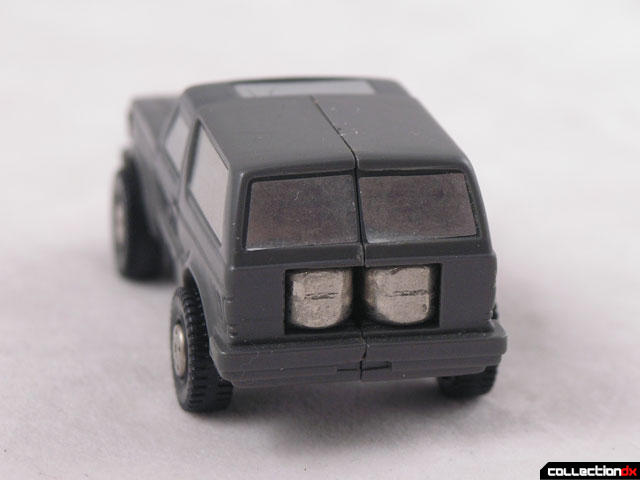 He's an unremarkable toy, on all levels. He's just sort of boring. The plastic is plain grey with few details. Metal is limited to the upper legs and body.

To transform, separate the rear of the truck and unfold, then rotate along the hip axis, then swing down. Separate the arms down to the side and flip up the head. 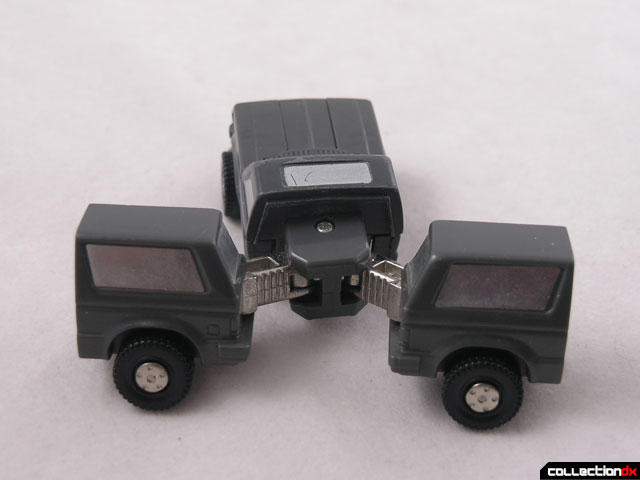 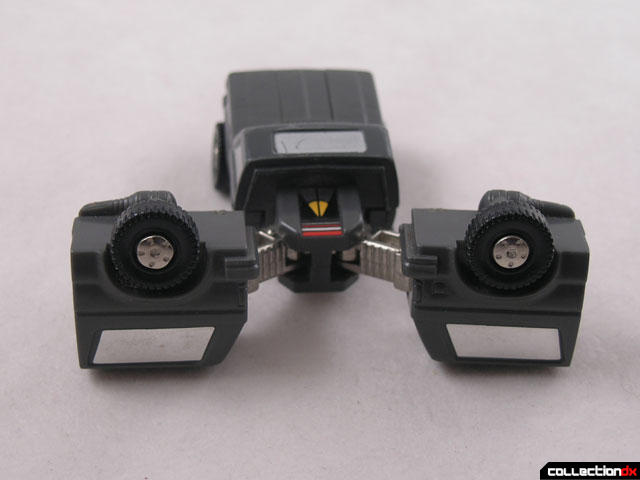 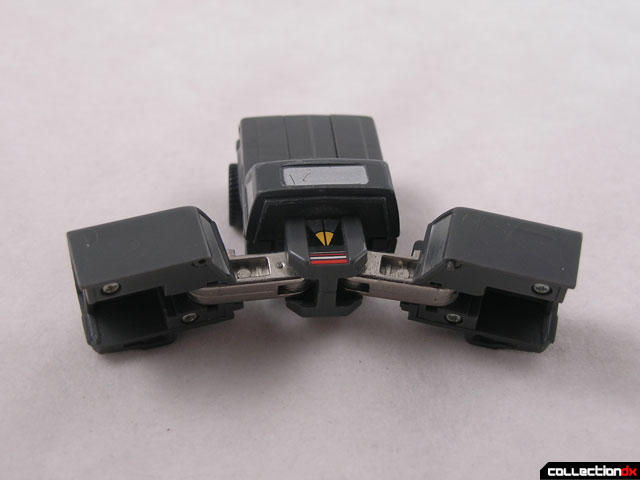 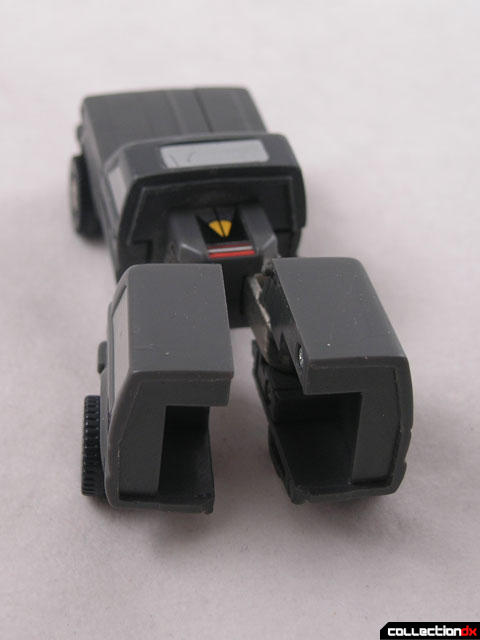 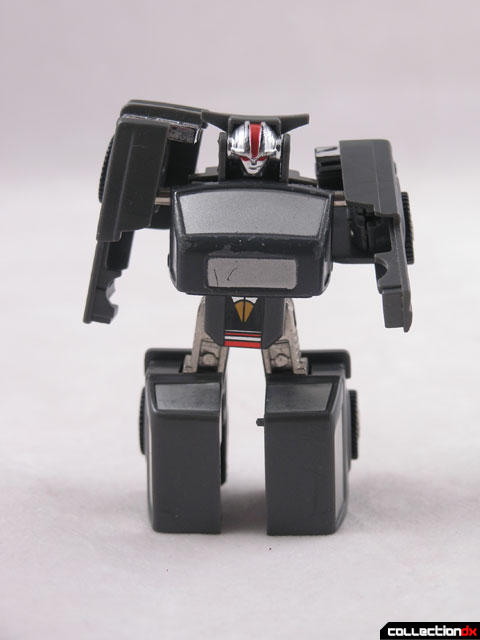 The years have taken its toll on scratch. I don't know if these arms were ever tight, but they are loose as hell now, unable to hold a pose. 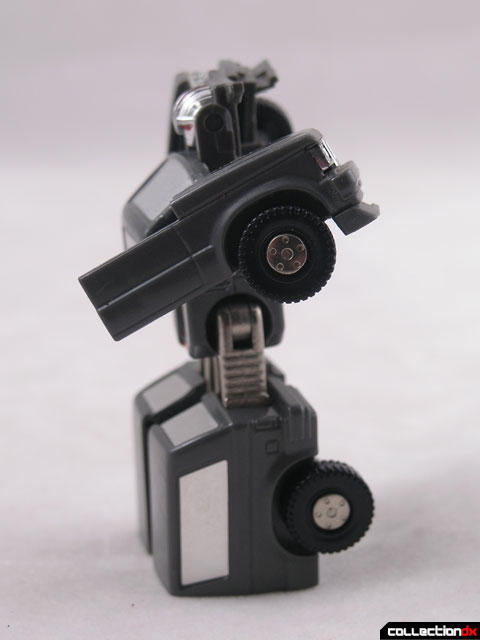 Scratch is a mess. 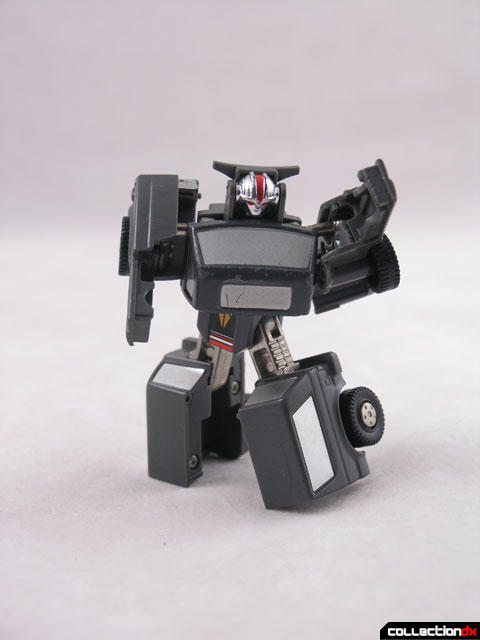 Other Gobots might have more inventive transformations or vehicle modes, but I can say with complete certainty that Scratch is my favorite Gobot. I remember getting him from the vintage toy dealer before he closed when I was little, and having him for most of what I can remember. I'm not even sure where the two or three I own are, but I can recall almost every little nook of the sculpt in my hand and how he moves from memory. The ball jointed shoulders and overall articulation were wild me to at the time, and there's something about the plain grey unassuming design that totally speaks to me. Plus, I dig that chrome face with the red trim details.

Someday I might have to splurge and find a nice minty one or one on the card. It's too bad this guy wasn't released in Japan so I can't track down one in those nice Machine Robo boxes.

Heh, that'd be an S-10 Blazer to be exact. ;0)
I usually go for getting toys that are a Jeep, Nissan or Toyota 4x4, or monster truck, and surprised I don't have one of these laying around, ...I think.
Nice pics make a toy look non-mediocre-like.

Funny how I started reading your comment and then thought, this is probably Jons comment, then I look and lo and behold it is haha,

anyways, Im a sucker for these types of toys, they are so horribly simple yet as a kid they left a mark in our brains somehow, I still remember messing with my gobots and having tons of fun, yet when I dig them out, Im like "this is it?" I enjoy these reviews of long forgotten toys.

Other than loose joints, that doesn't look too bad.

I have this guy. I like the way the legs transformed.

The thing about these guys is that even when they're mediocre,you still like them. I mean,they didn't cost much,they aren't very big,and most of them kind of blend together,so while you have some,like Scratch,that aren't really inventive or amazing,there's noone BAD like TF Armada Sideways. Even Bad Boy is OK looking IMO.

I stand by my statement that some of the smaller pieces in my collection are often the funnest. There's less room for error, and proportionately they have more fun than larger counterparts.