For “Transformers: Revenge of the Fallen”, the line of Scout-class figures are inspired loosely by split-second moments seen in the film, even though they do not appear themselves on-screen. Thus they do not have established individual characteristics. (Most of them actually have re-use names from previously-established Transformers canon, and so their personalities and histories are based on them instead.)

Depthcharge’s vehicle mode is based on the real Visby-class stealth corvette used by the Swedish Navy (even though neither ship nor 'bot appeared in the movie itself). 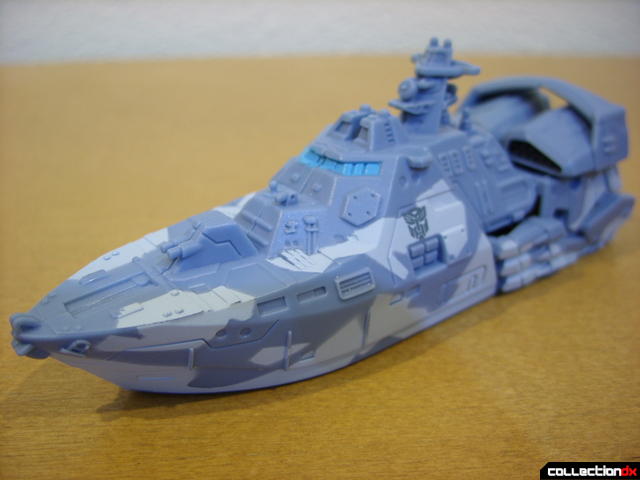 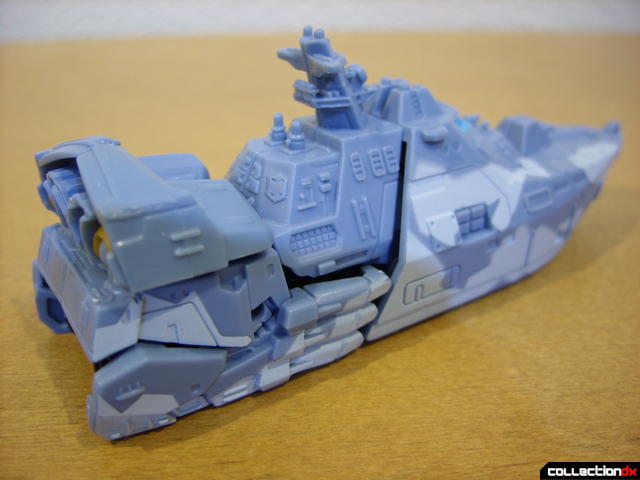 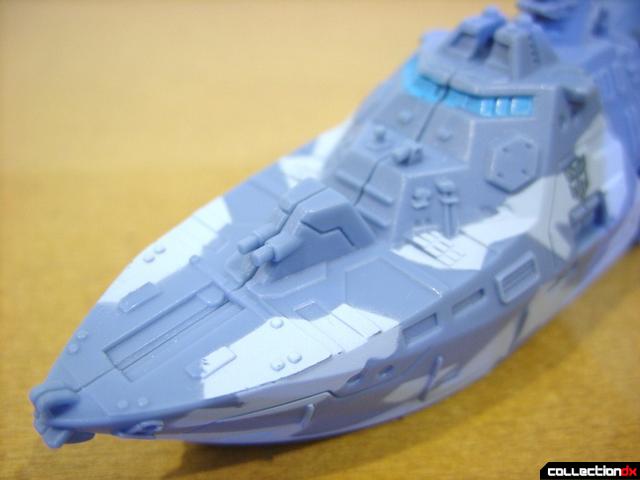 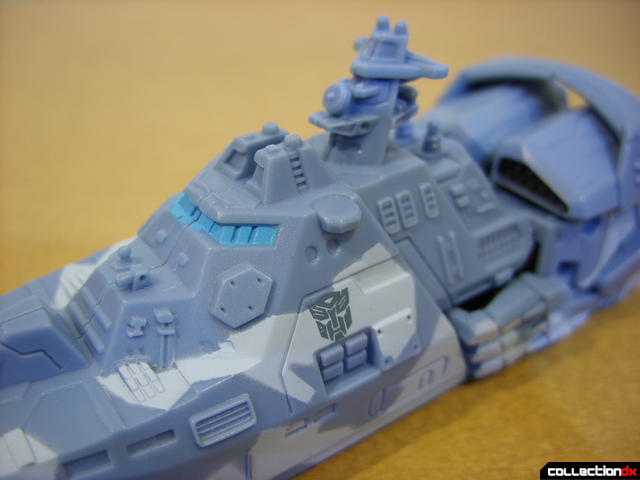 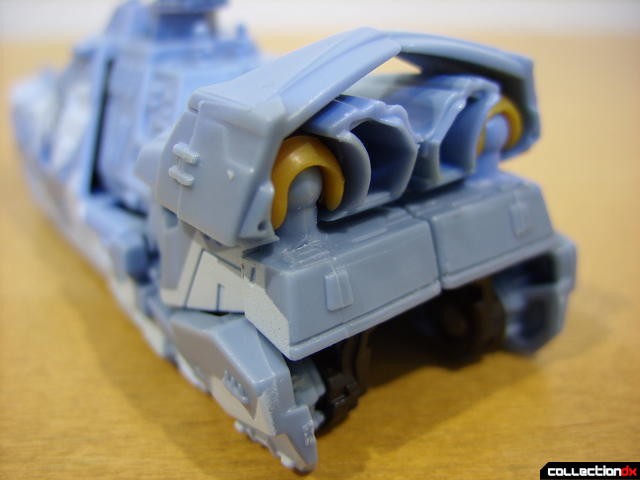 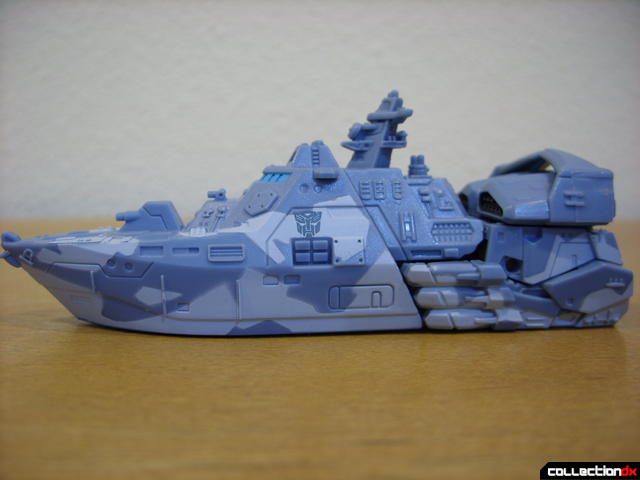 Though not listed in the instructions, you can fold the shoulder-mounted missile launcher upwards. This exposes what would have been a helipad on the back of the real vessel. 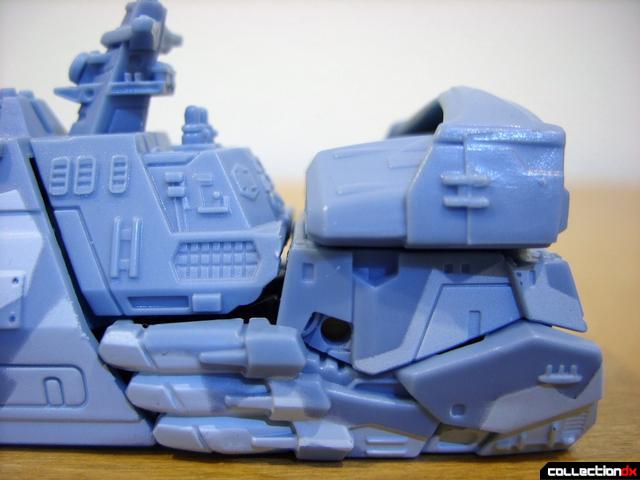 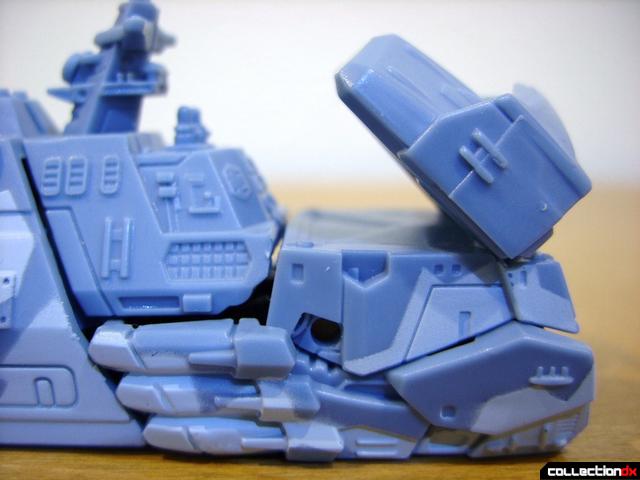 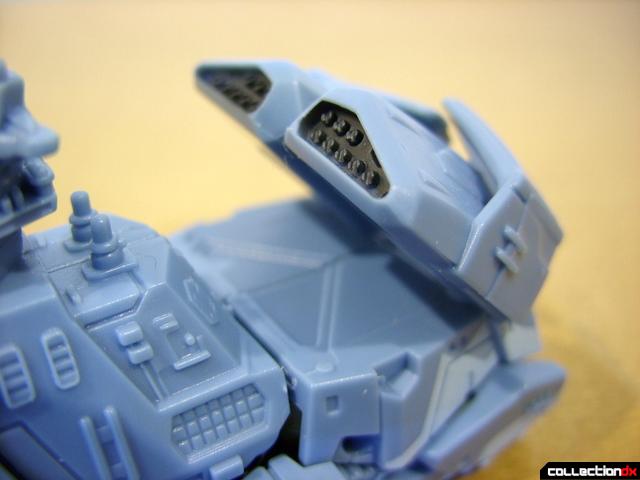 The main gimmick for all of the fully-transformable figures from the 2007 “Transformers” toy line was Automorph Technology™: as one part of the toy was being moved, another section would activate and move by itself via internal gears, springs, and levers. (Usually this applied only going in one direction for transformation but not the other.) For the 2009 “Transformers- Revenge of the Fallen” toy line, the Automorph feature has been replaced with Mech Alive, which is not involved in transforming the toys. Rather it is a gimmick that functions only in robot mode to better imitate, in some fashion, the intricate movements and mechanics of the immensely-more complex CGI character(s). Some figures are being reissued from the 2007 line since no significant changes were made to the character in that time-span, and will still include their original Automorph feature, but not the newer Mech Alive feature because they were manufactured two years previously. Scout-class figures are too small to incorporate a Mech Alive feature, and so Autobot Depthcharge has none.

This is an intermediary form which could be actually be considered his primary Robot Mode since it is based directly on concept art which was developed for the movie. According to concept artist Ben Procter, the idea was to have an in-between state where Depthcharge could still transform while remaining in the water, and then later complete the transformation to a standard walking form once on land. 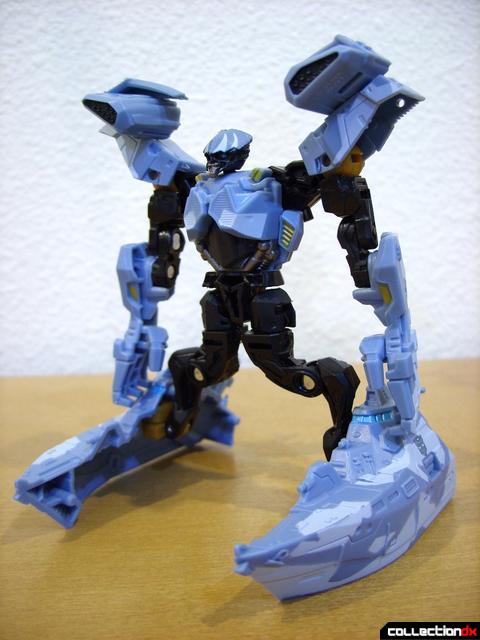 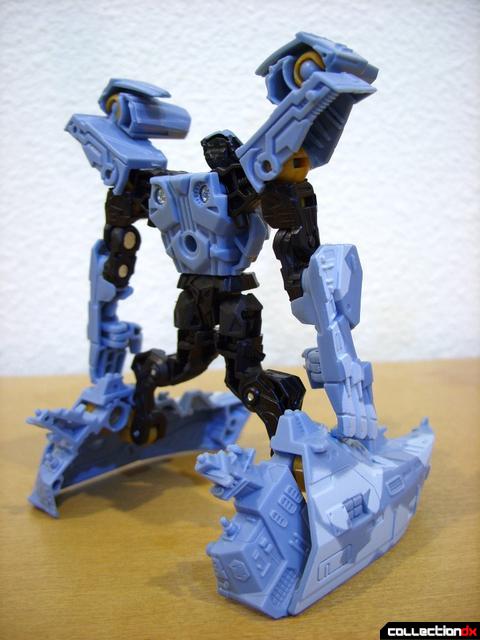 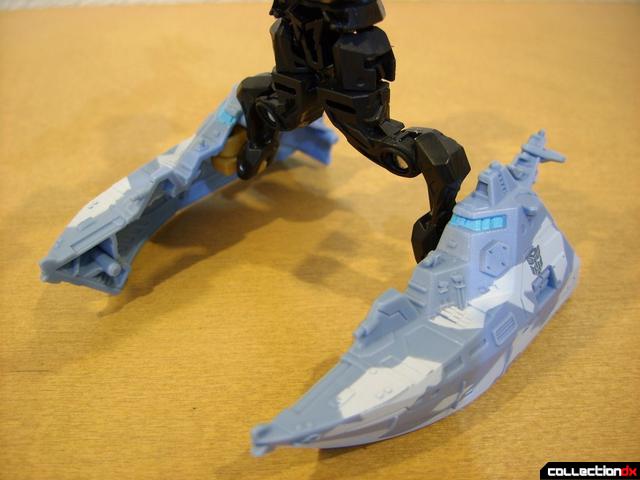 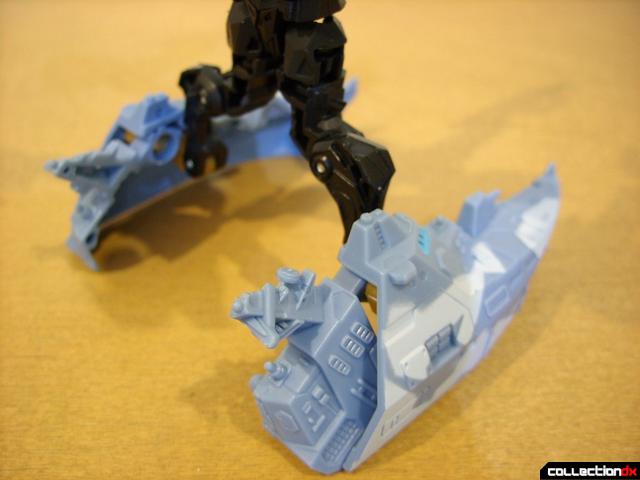 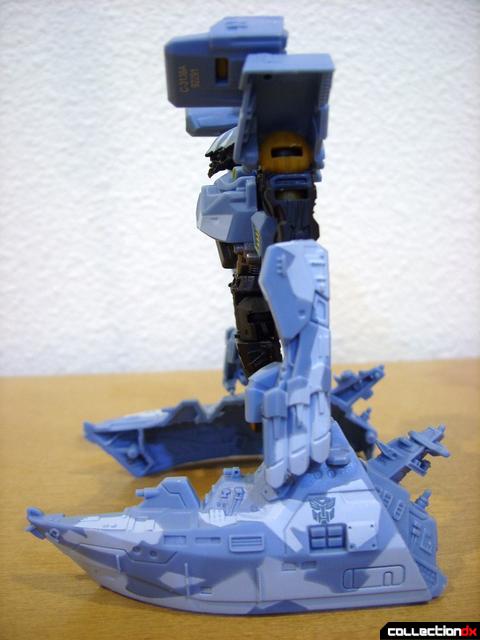 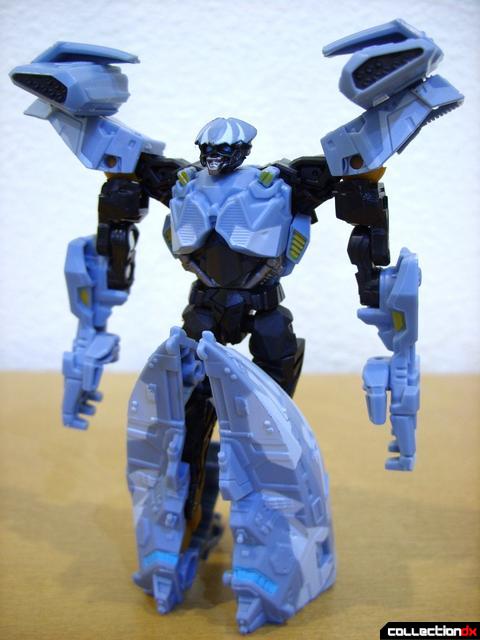 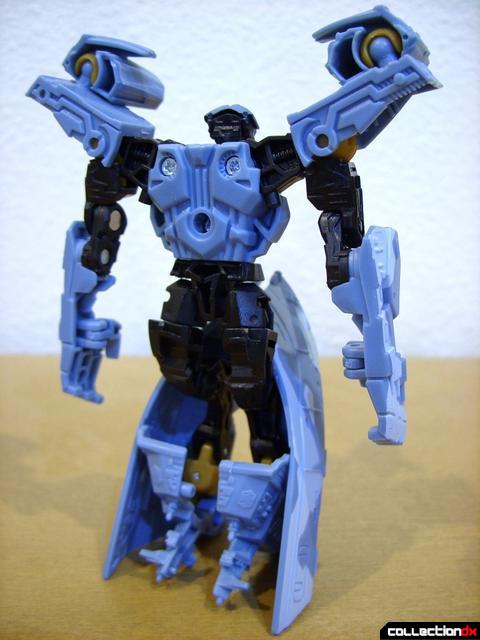 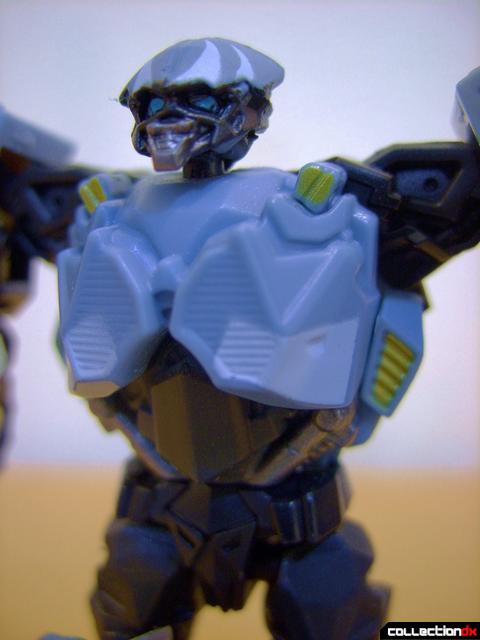 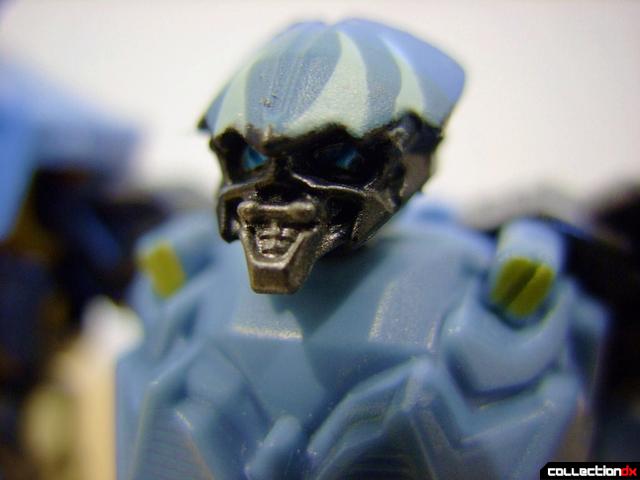 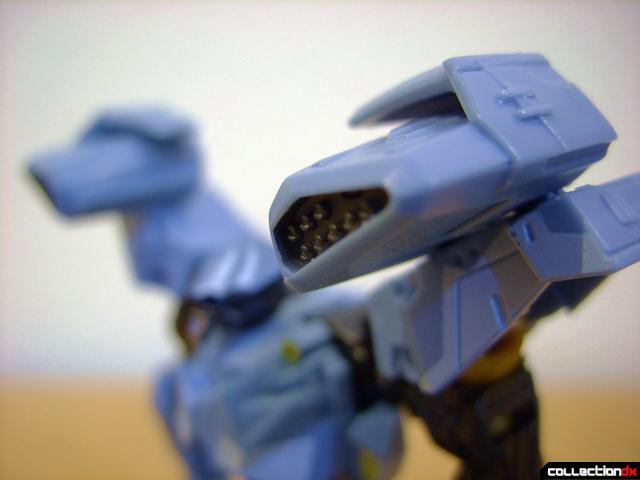 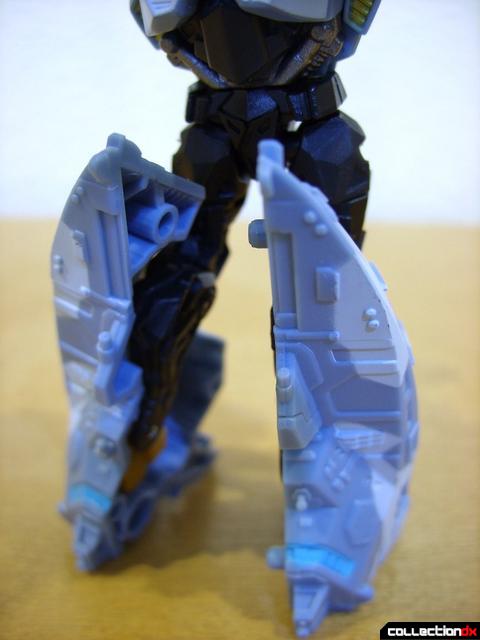 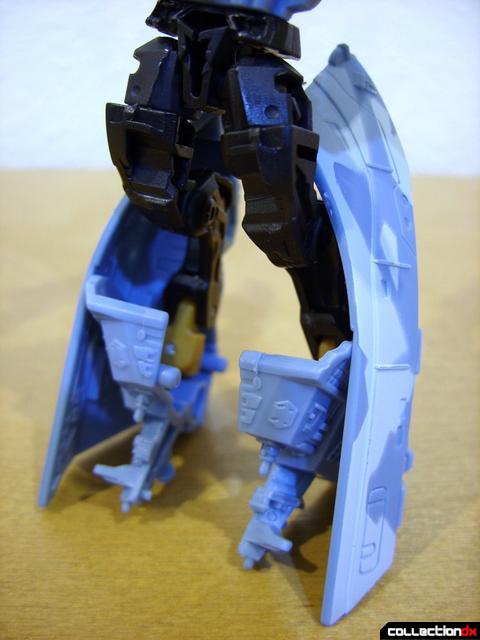 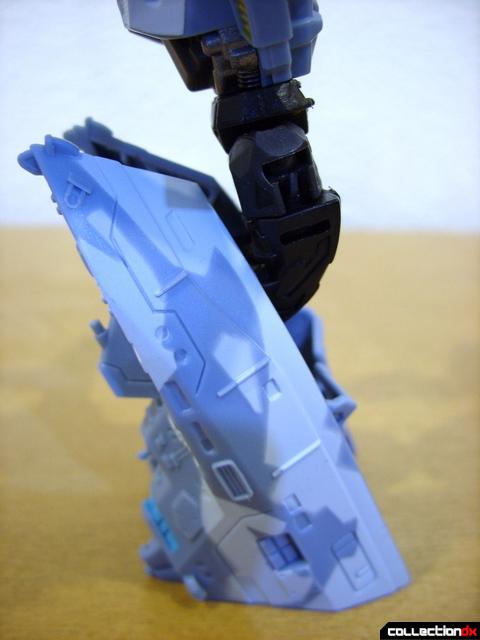 I usually don’t go for characters that don’t appear on-screen, but that’s just me... Previously, I covered almost all of the Real Gear Robots line, which were similarly-inspired by the first film and how the All Spark Cube could animate random human machines into Cybertronians. (A separate line of Scout-class figures were also released, but they were small-sized repaints from previous series.)

How ironic is it that the potentially-largest robot that was imagined early for “Transformers: Revenge of the Fallen” was reduced to a tiny Scout-class figure when he didn’t make the cut…? Well, at least he was spared the greatest humiliation of becoming a Mini-Con figure, eh? (Estimates suggest that he would have stood far taller than the hunched-over 100-foot Devastator! Compared to the real warship, this puts this toy in a relatively-unique scale of 1/631.) Anyways, I don’t care for the fact that the entire front two-thirds of the ship become the entirety of his lower legs. Surely some more shifting around of hull panels would have been preferable. From the knees on upwards he looks like the concept image above, but from there down it’s just a single block. That the joints inside the hull aren’t very resistant doesn’t help, so he doesn’t stand up very well, and you spend time fixing transformation joints that move when they’re not supposed to. The poseability is fine in both Robot and Attack Mode, and he has nice surface detailing in all three modes. (If the hips are too lose- like on mine- then he won’t be able to stand upright in Attack Mode.) I kinda wish the missile launchers on his shoulders didn’t stick out so prominently and could have slid backwards; though I do like that they’re on ball-and-socket joints for movement in Vehicle Mode. (I get the feeling that this guy was meant to have light-piping in his eyes at some point which was later abandoned...) The poseable thumbs were also unexpected, weren’t an issue. 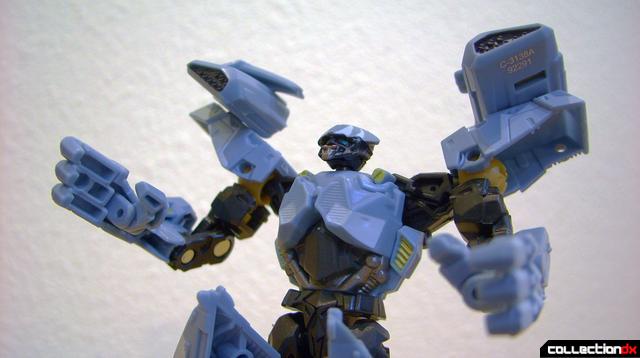 For his size, the Scout-class Autobot Depthcharge figure doesn’t do too badly unless he’s got issues with loose joints, or you’ve got an issue with an 800-ton water-skiing alien robot.

23 comments posted
The design of this toy from

The design of this toy from the waist up reminds me of some of those Armored Core mecha. Pretty cool all in all. :)

This guy would probably be a more interesting toy if it was larger Voyager Class. He wears a funny hat.

I would also have liked to see him in a bigger class so he would have had a more interesting transformation and better joints. Voyager-class might be pushing it, but definitely Deluxe-class.
------------------------------
CollectionDX Staff

The big shoulders and big calves with tiny little body and limbs is a FM thing.

I liked this guy a lot when I first saw him, although I never noticed his oddly cheeky grin before...

Oh, I can't tell you how frustrating it was to make any attempt at shooting his head! The dammed this is pea-sized, I kid you not, and I couldn't get either close enough for detail or focus clearly on it. I had to play around with the contrast and brightness setting in the display program and distort it a lot to get what what you see up there.

Leave the concept artists alone... It's the director who has the final say.

You're saying that Michael Bay, alone, designed the final look of all the transformers in those movies?

It reminds me of the old Convertors series of boats, Captain Nemo in particular.

Is that a TF brand? Never heard of it.

Convertors was a cheapy toy line in the US from the company Select. Much of their product were toys from Japanese manufacturer Mark, which was affiliated with Takatoku. Mark handled cheapy versions of Takatoku's deluxe toys. They had cheapy versions of the Macross Valkyries, the robots from Dorvack, et cetera. These were released in the US (sometimes in weird color schemes) in the Convertors line and sold at places like K-Mart.

Hmm- that sounds strangely familiar, though I'm not sure where... :-/

An overview of most of the Convertors:

Some of the info there is a little off, and some figures are missing from the line up (there was a accurite Orguss figure along with the remolded one shown, for example) It was an interesting line filled with some original figures as well as simplified cheapie UFO Catcher/train station versions of other Takatoku toy lines...Macross, Dorvack, Beetra, Orguss, Sasurainger, and Galvion.

I really don't think Micheal Bay has any say over robots that don't even appear in the movie,but whatever. It is funny that internet fans seem to blame him and him alone for every fault of the films.

"It is funny that internet fans seem to blame him and him alone for every fault of the films. "

I blame the writers for Simmons, Judy Witwicky (she damn-well better get that Razzie!), Mikaela (likewise "..."!), robots who lack personality and/or presence (Jolt, Arcee & Co., The Fallen, Constructicons other than Demolishor, etc.), bad potty humor, and a few other things.

They start developing the toys not long after the concept art is in development. And as someone whom has been on the concept art side of things, its a collaborative process, but the boss calls the shots. Some more so than others.

(*looks at those who dispute him*) See-!

Yes, but not in the strickest sense. Late 80's early 90s I worked for a video production company. Did lots of production art, title graphics, animation, props and the like. Mostly we made TV commercials and industrial films, dull stuff honestly. But we did have a number of interesting projects and clients. Especialy during the early days of CD-ROM development. Some of that involved concept design.

I recall two clients looking to get into game development that I did a lot of concept design work for, one was a arcade game distributor out of Chicago. They wanted to do some epic space shooter thingy and I did a ton of work on that. They wern't the most imaginative though and pretty much wanted everything to resemble Star Wars. "Make it look more like an X-Wing." They would say, which sucked as my anime influanced style landed me the job to begin with :P

Other one was a futureistic submarine game that became Hydrosub: 2021 for the Action Max VCR game system. Less said the better :P

Is this guy a tribue to the Beast wars era maximal DepthCharge?

Being a BW fan, that was my first thought too. But consider than smaller ships actually can drop depth charges, so that might be part of it.

Now, a tribute to the character? Doubtful.. BW Depth Charge was a scarred, vengeful guy who'd lost everything except his revenge against Rampage.

Of course, Scalpel is a tribute to Tarantulus (I could see that... sorta), and Megatron supposedly had moments of BW Megs when he said "Yes..." when agree with The Fallen inside the Nemesis (that wasn't my first thought in the theater!).
(To the writers of Bayformers: just because a Megatron says "Yes"/"No" does NOT mean we will immediately associate him with BW Megs, you dolts! BW Megs had many things aside from Yes/No that made him memorable.)
------------------------------
CollectionDX Staff

Usually anyone besides the main characters in any given TF series who share names with prior TFs are just name reuses. I mean,no doubt,they were looking through their list for nautical sounding names and saw Depthcharge,but I don't think they had that character in mind when designing or writing the bio for this one. IIRC there were a bunch of guys in A/E/C that had similar names to past robots but nothing else.
I don't know if you guys watched "TF Robots in Disguise" but in that show most of the "homage named" robots weren't even named that way until the English dub,so they definately aren't intended to be a version of the same character.