So I never thought this would happen. I've been watching Bandai display their S.H. Figuarts releases at various toy shows with these very elaborate props and stuff for years, but I never thought they would actually release any of them. But here we are with a Saiyan Space Pod. Well, kinda.

This isn't an S.H. Figuarts release. In fact, this is a model kit under their Figure-rise line. Of course, instead of being a part of the Figure-rise Standard line, this is called Figure-rise Mechanics. I like the name, and I like the fact that it subtly hints that there could be more 1:12 scale (ish) vehicles in our future. 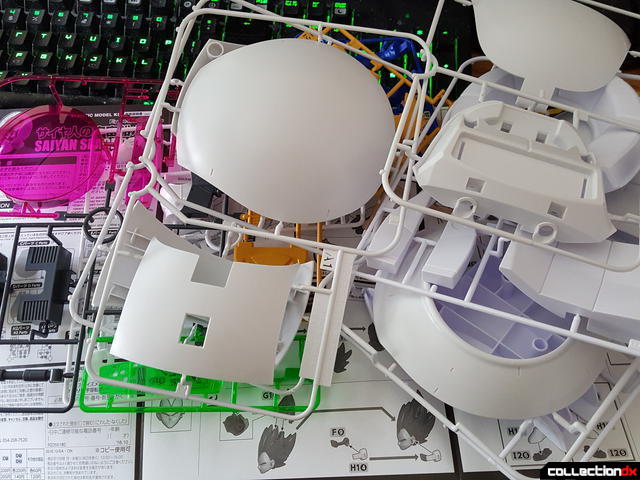 So yes, as the term "model kit" implies, you have to build this when you get it. There are a bunch of large pieces and I was pleasantly surprised to see that it wasn't overly complicated like some of the larger scale Gundam models.

The first step in the instructions is to build our passenger, Vegeta. Don't get too excited, as the figure isn't articulated, and is basically just there as a placeholder until you put something better in there (more on that later). 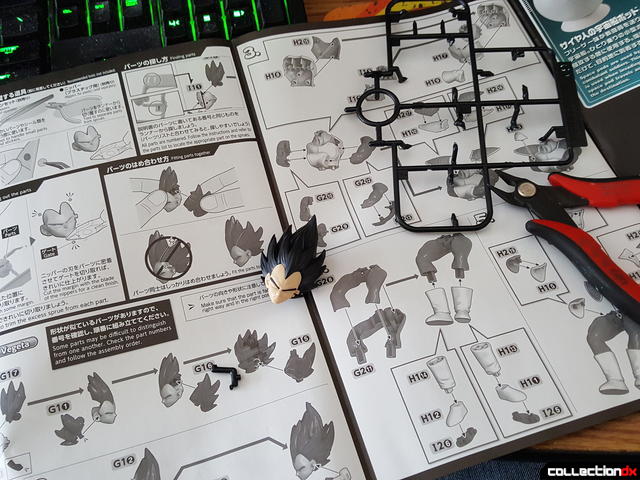 Anyway, you start off with Vegeta's head and scouter. It's not too complex, but there are more pieces than I originally would have thought for a static-pose figure. The hair is built using several pieces so there's a lot of detail. I also like how the black plastic has some dull brown overtones to simulate Vegeta's hair from early Dragon Ball Z. 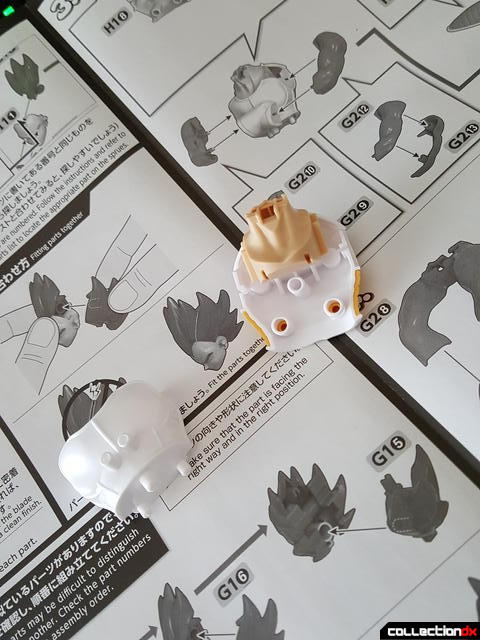 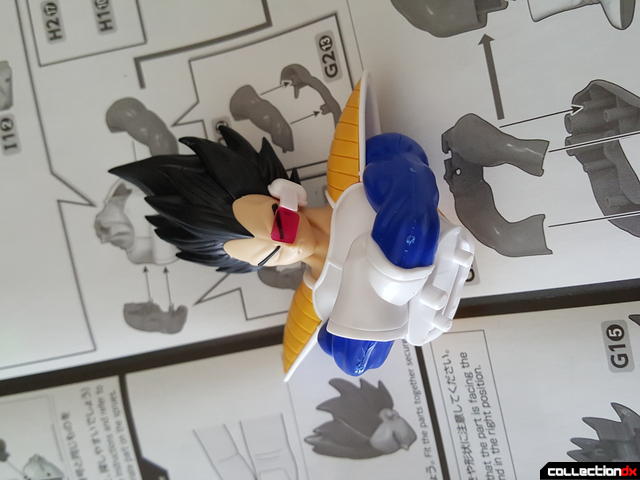 From there, you build his chest and arms, which are basically one piece since his arms don't move. The lack of moving parts makes building the rest of him a piece of cake. 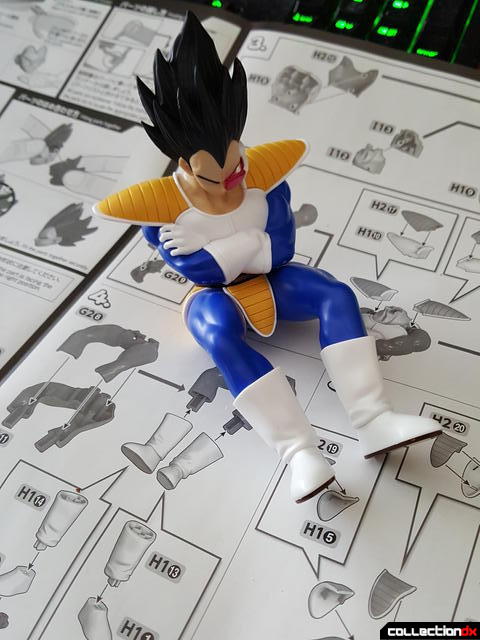 Once you finish assembling his legs and popping both halves together, it's time to move on to the main course. 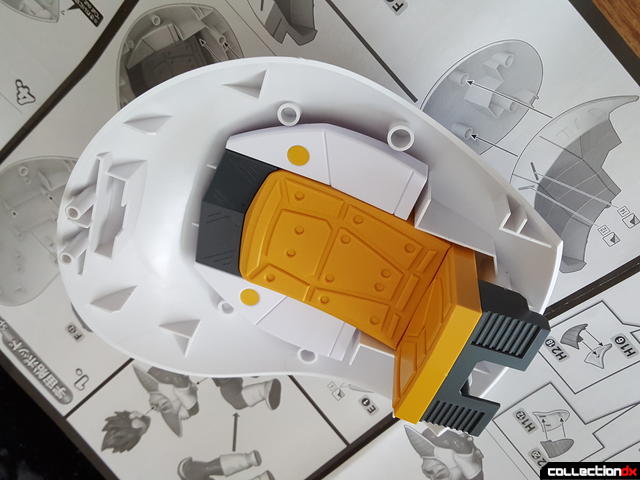 The Space Pod begins to take shape after building the back half of the chair and outer hull. There are a few stickers here and there, but not any more than the average Gundam torso. 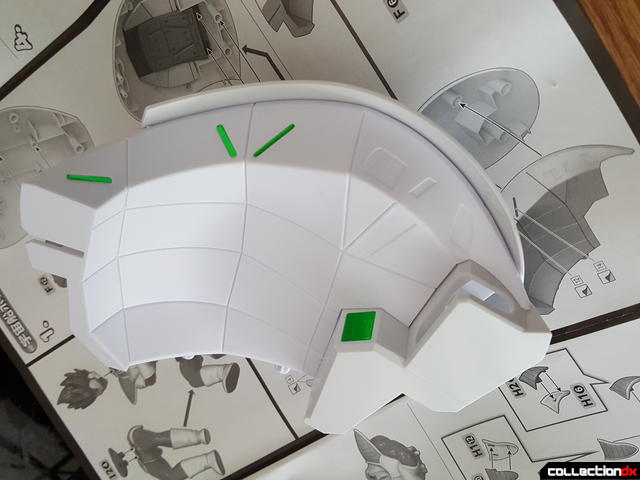 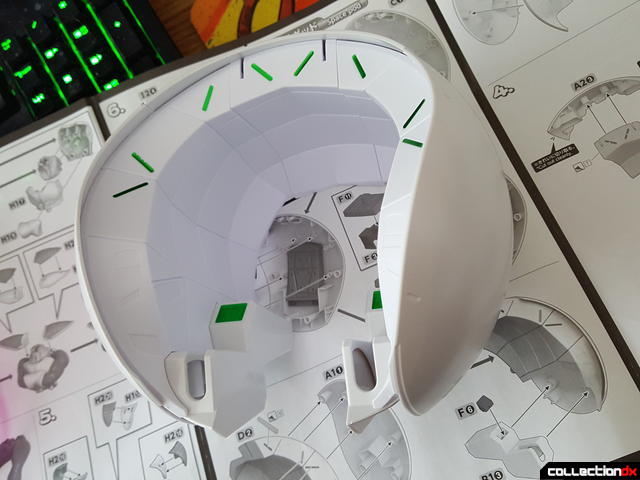 You then build the sides of the Pod and clamp them onto the piece with the chair. 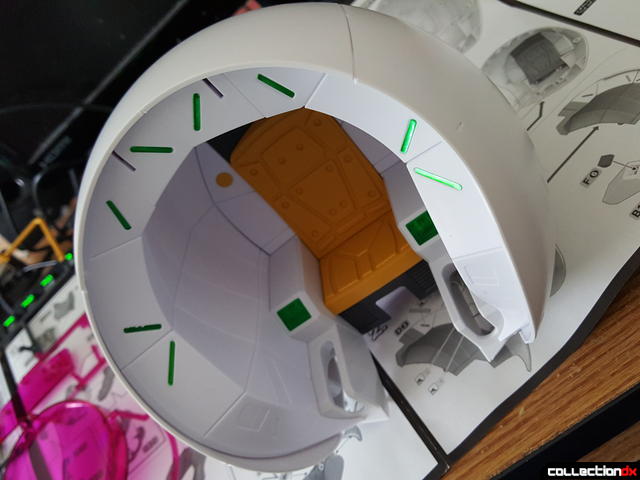 Once the outside of the Pod is finished it's time to build the door. There is a simple hinge that plugs into place, and the layers of the door are large and easy to pop into place. 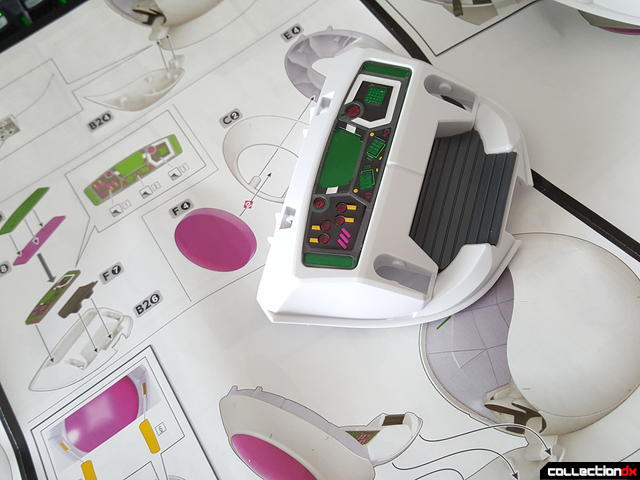 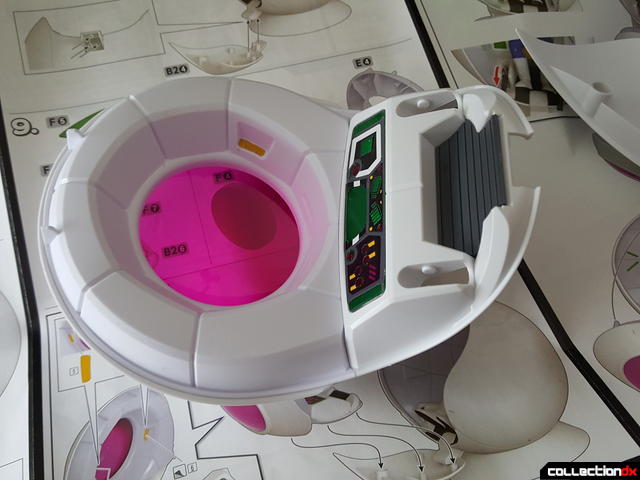 The hardest part is the control panel. It is built by layering some opaque green and purple plastic layers on top of each other, along with three large stickers. To be honest, getting the stickers right was the most difficult part here. And as long as you are careful not to destroy the whole thing it should be easy to handle. 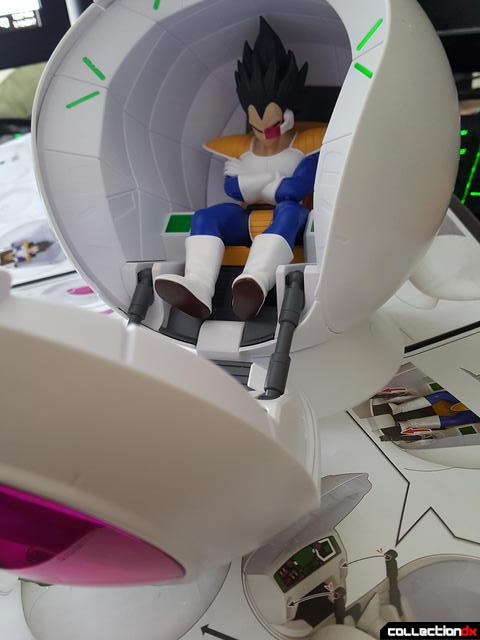 After clamping the door onto the opening of the Pod, you insert a couple of pistons for extra effect. They slide in and out of the Pod, and it really sells the fact that this is a big mechanical door. 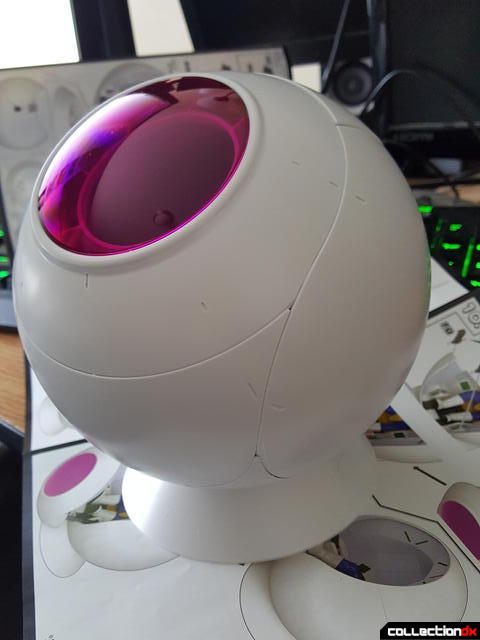 Then all that's left is to drop in Vegeta and toss it onto the included stand! The stand really helps here so the Pod can be a full sphere but still stand without rolling around. 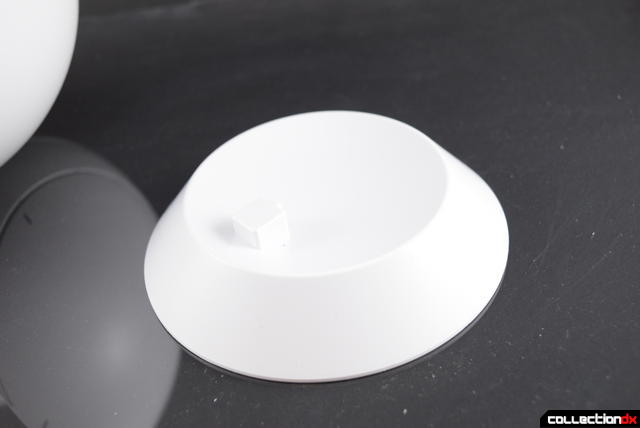 And if you go a bit further and begin the long process of panel-lining, you can get a gorgeous piece of anime goodness that looks like it leapt right out of the TV (or manga page if you're cool). 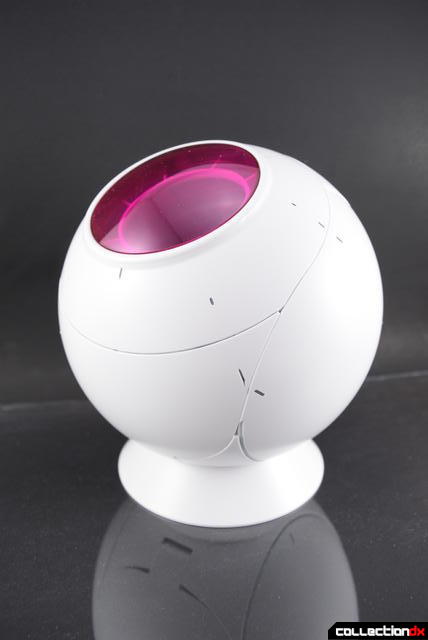 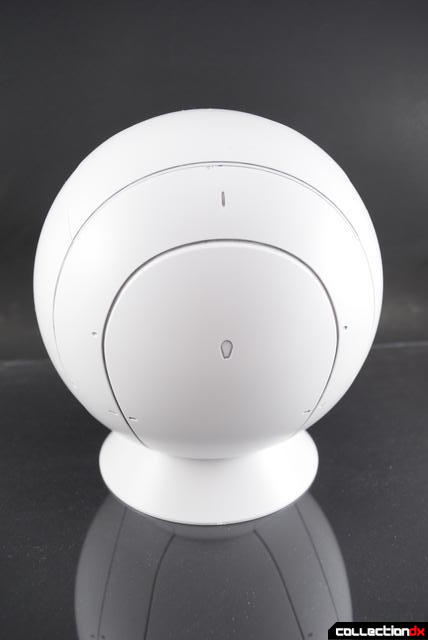 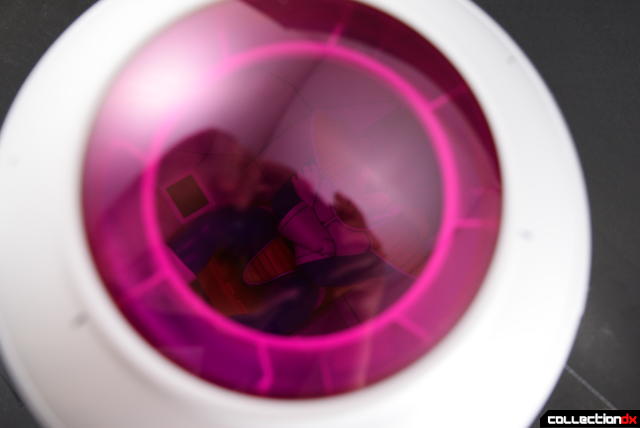 I love how you can see little Vegeta through the window. 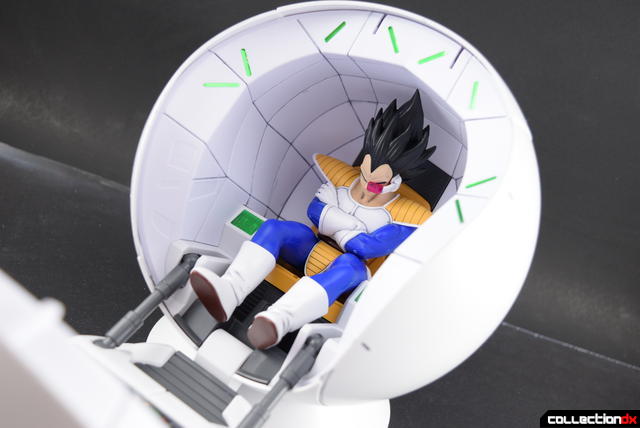 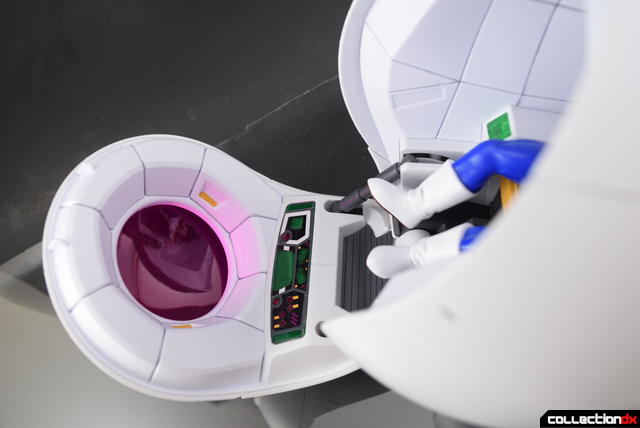 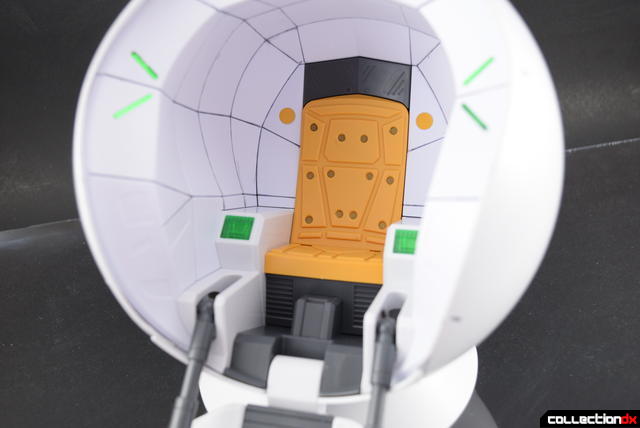 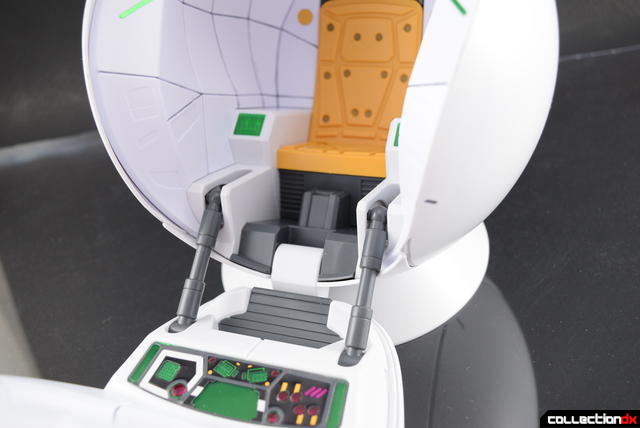 Overall, the Saiyan Space Pod totally rocks. It's perfect for pretending you're flying through space on the way to destroy some dumb planet full of filthy monkeys.

Did I mention that this scales beautifully with S.H. Figuarts figures? 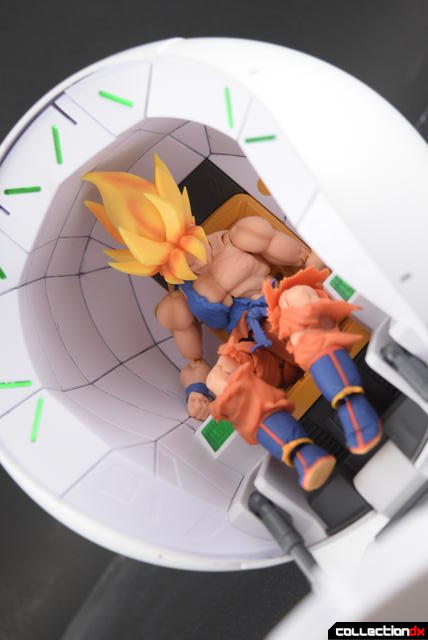 Because it does. Well, Goku would work if his Super Saiyan hair wasn't so tall. But most other figures would fit perfectly.

I also dig how panel-lining Vegeta makes him look fantastic. 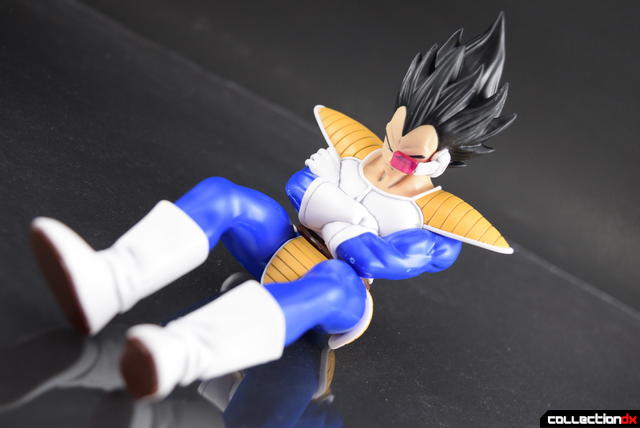 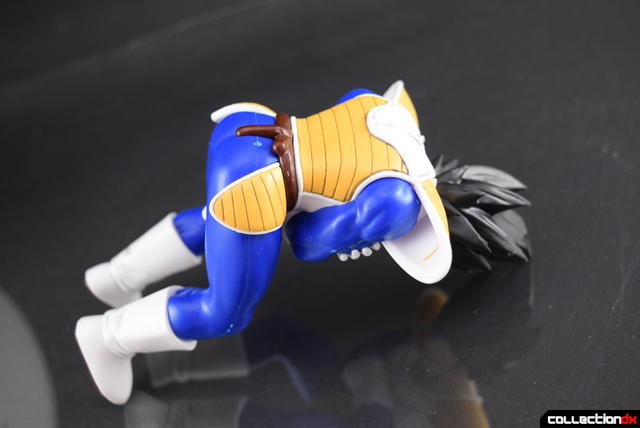 So yeah, I highly recommend picking this set up. It's a snap (zing!) to build and looks great. 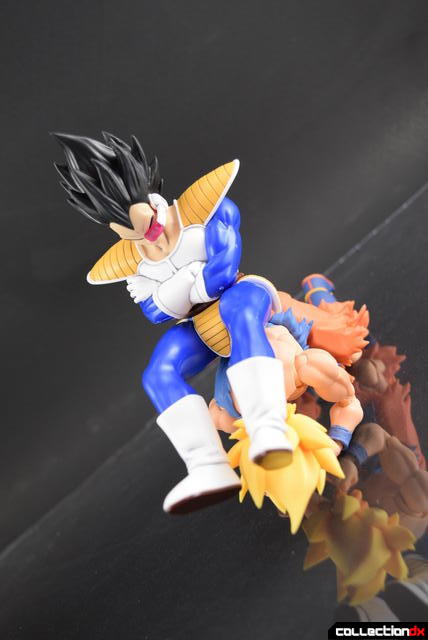