Sailor Moon is a character who needs little introduction. The main heroine of Bishoujo Senshi Sailor Moon, Usagi Tsukino, lead her team of short skirted soldiers in pursuit of truth, justice, and the right to rescue brainwashed boys from the clutches of evil. The series successfully blended the team aspects of Super Sentai with the trappings of Magical Girl shows in a way that completely reshaped the genre.

Despite the immense popularity of the series, it took a rather lenghthy break on the merchandising front much to the annoyance of its fans. After a plethora of PreCure Figuarts, the true queen of fighting Magical Girls returned to take her place in Bandai's premier action figure line. 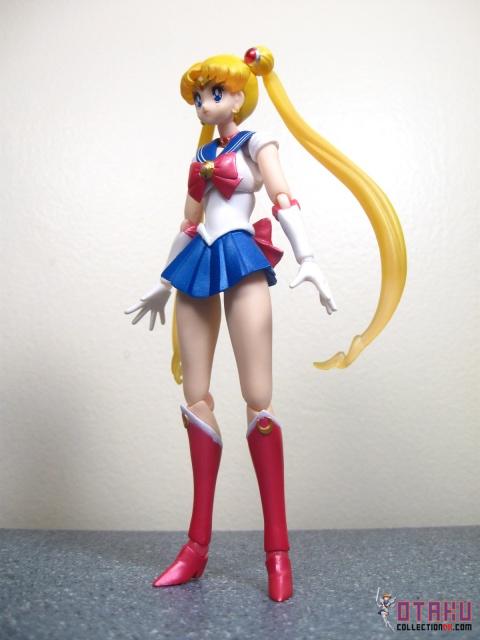 Sailor Moon stands roughly five and a half inches tall and is made mostly from PVC plastic. She looks very authenthic and does a lot to capture the look of the character right down to her skirt that is way too short to wear to the prom. 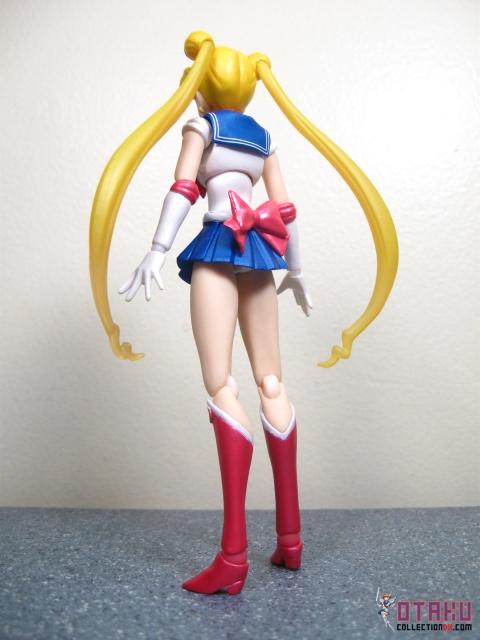 Her numerous ABS plastic joints are fairly well integrated into the sculpt of her limbs and provide adequate stiffness to keep her upright unaided. However, her small feet coupled with her ample amount of hair makes her a bit top heavy. 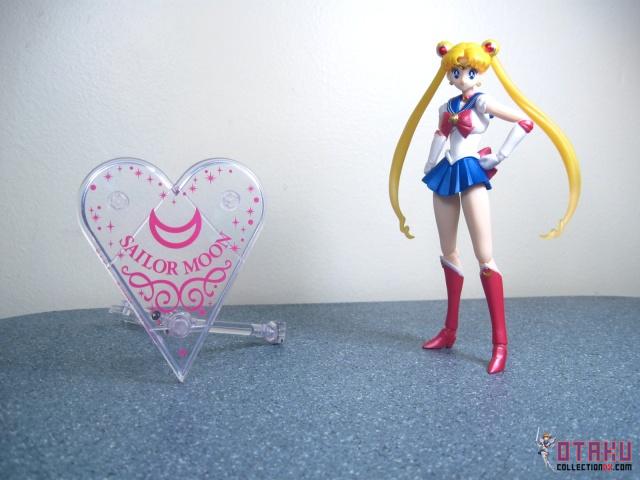 If you do need some extra balance, Sailor Moon comes with a personalized Tamashii Act Stage with an articulated arm. Sadly when you use the stand as intended her name is upside-down when you look at it. 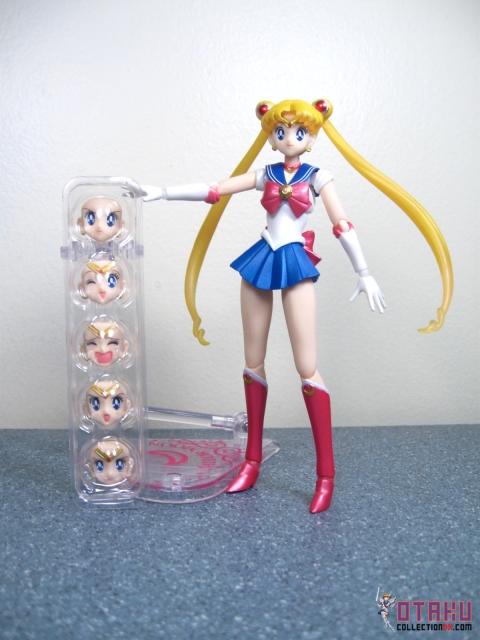 Like any good modern anime figure, Sailor Moon comes with a pleathora of expressive faces. They come neatly arranged in this small plastic tray that can be removed from the main tray which is handy for storage. Of course the reason reason they are packed like this is so Bandai can reuse most of the packaging when they stiff out late buyers but subtracting two of the faces from the accessory count. Only the first run of the figure does include all the faces but at this point we're still on the initial production run so most buyers have gotten all six. 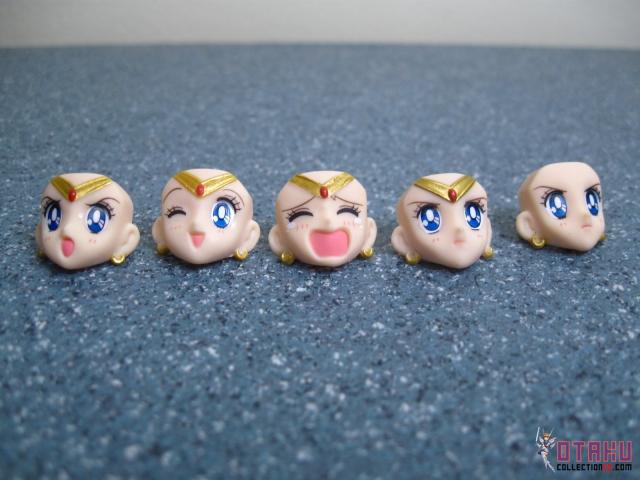 All of her faces can be swapped in and out by removed the front part of her hair and then sticking the new face on. The one of the end that is missing her signature tiara is for when Sailor Moon is ready for some Moon Tiara Action. 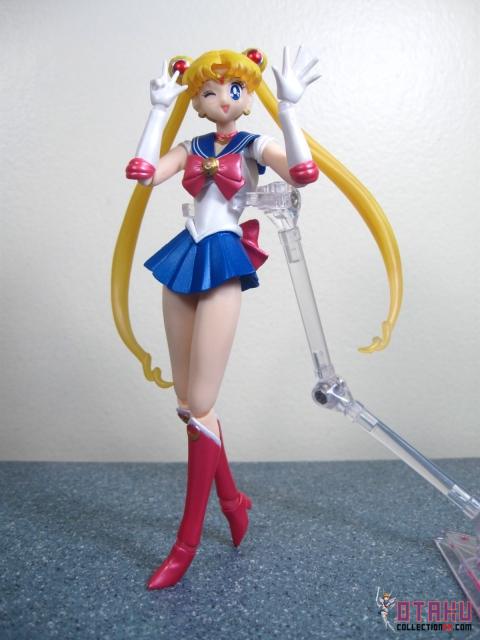 As a Figuart, the Sailor Moon figure manages to capture all the charm and spirit of the character. She comes with a good number of optional hands including fits, open palmed, and a V-sign. 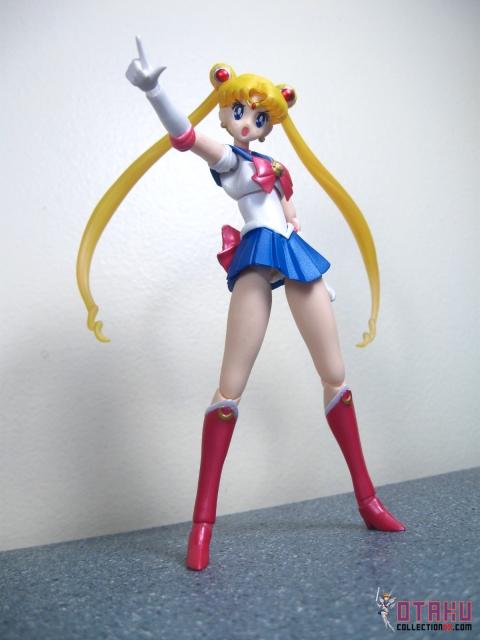 With a bevy of different hand and face options, Usagi-san can confidently command the other Senshi like a true leader. 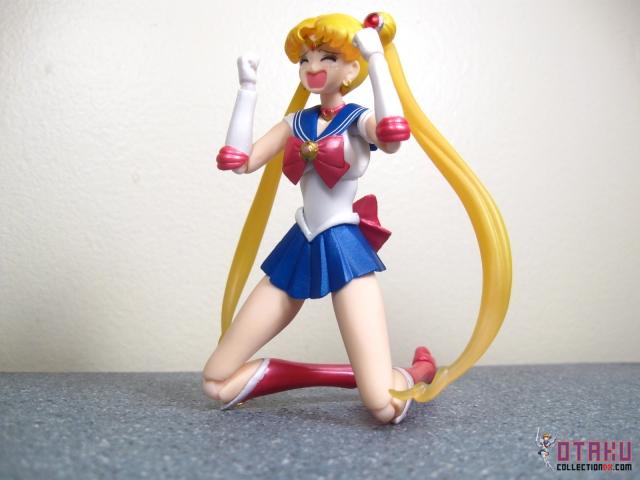 Or have a good cry. Don't worry this is actually her involuntary sonic distrupter attack :3 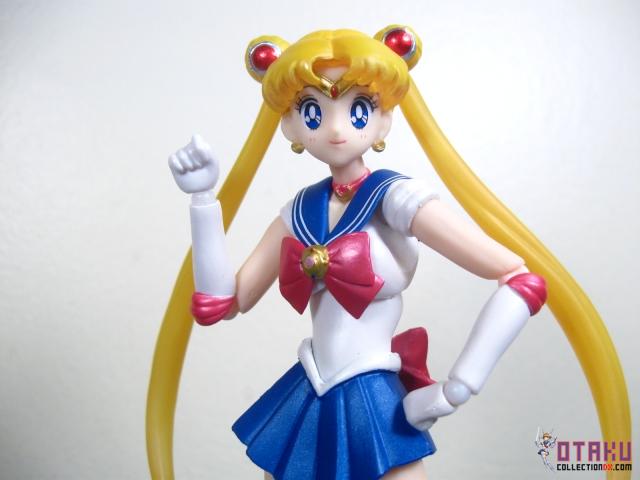 The hands all peg onto a small universal joint which allows them great flexibility. Although on a few of the hands the hole for the wrist was a bit tight and needed to be carefully pushed over the peg. I'm used to the Figma approach where they tend to use a more visible but less quality control prone hinged peg on the hand itself system. 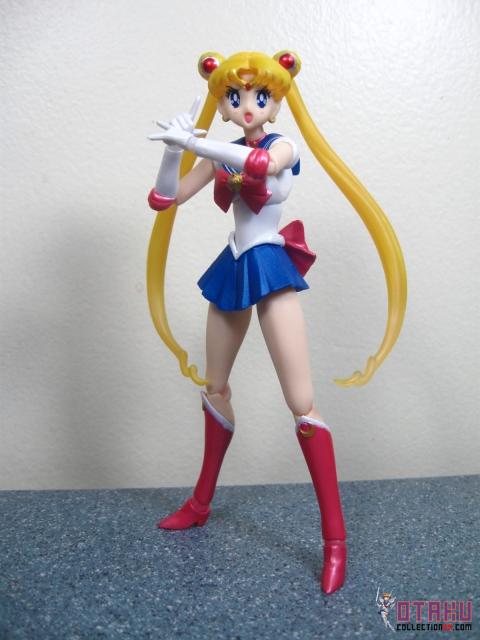 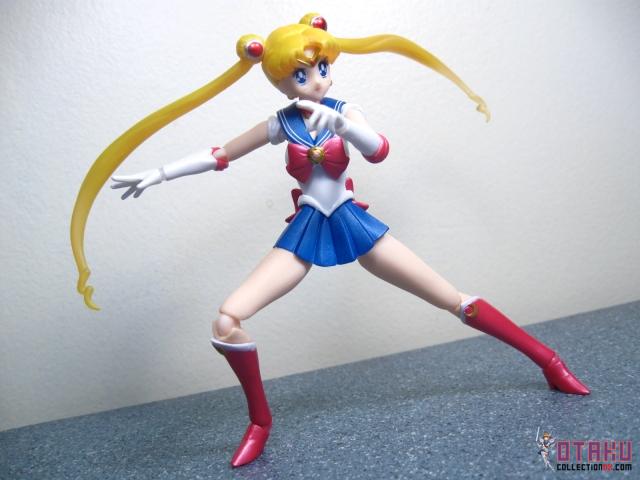 The rest of Sailor Moon's articulation is very well implemented even with her slight frame. Even her iconic twin tails can pivot around to act as counter balances when she's posing. The only weak area is that the bicep swivel in her arms is at the oblong area between her poofy sleeves and upper arm. It takes some force to make them move and can easily pop out. 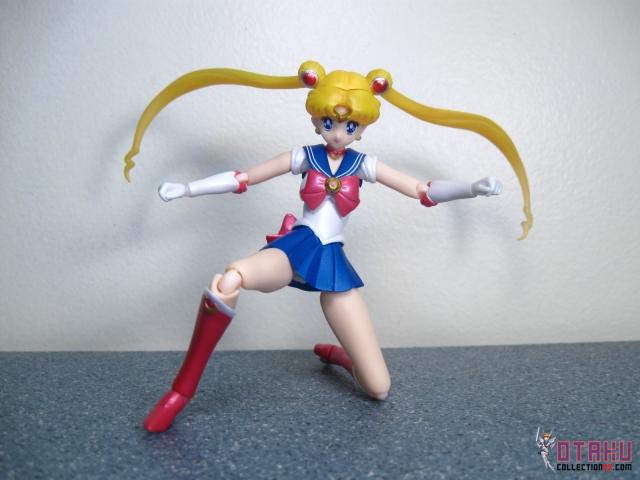 Her flexible PVC skirt and pull down ball-jointed hips let her heroically crouch down before leaping into the air. 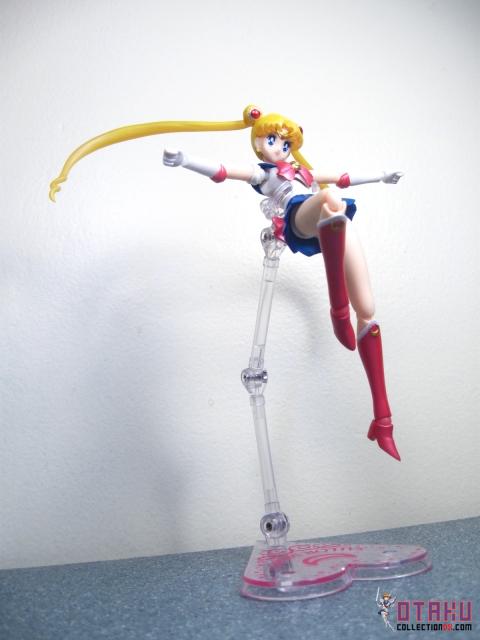 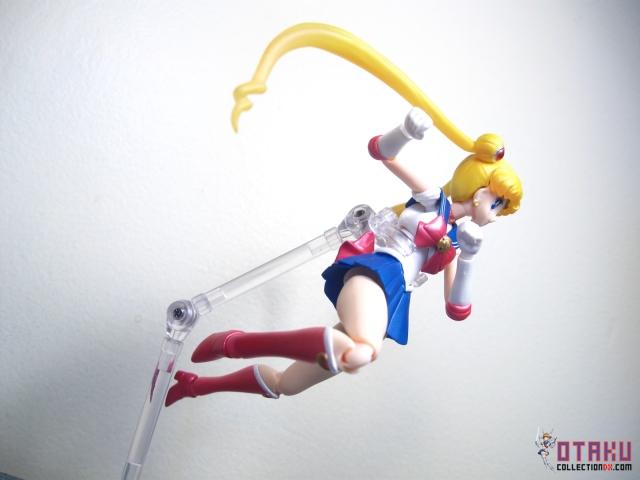 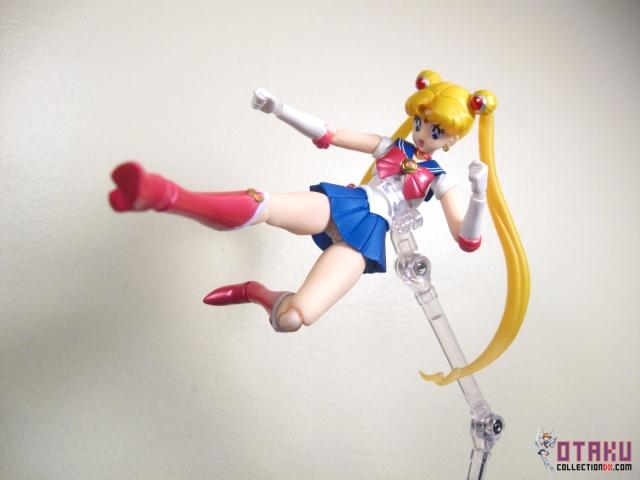 Every Japanese superhero worth their weight in plastic can flying kick a fool and Sailor Moon is no different. 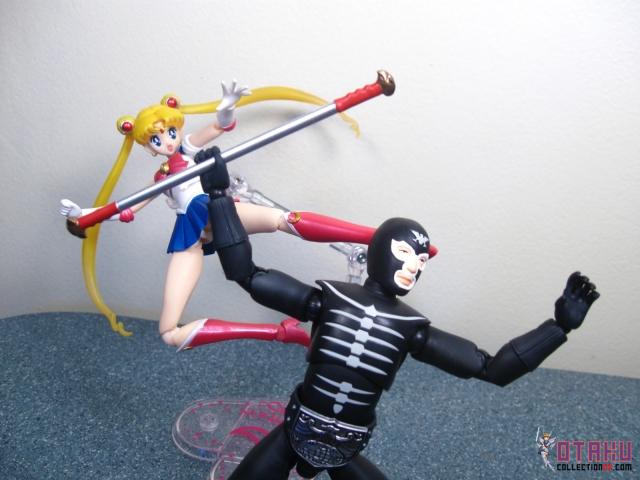 Even villians from other Toei series are not safe! 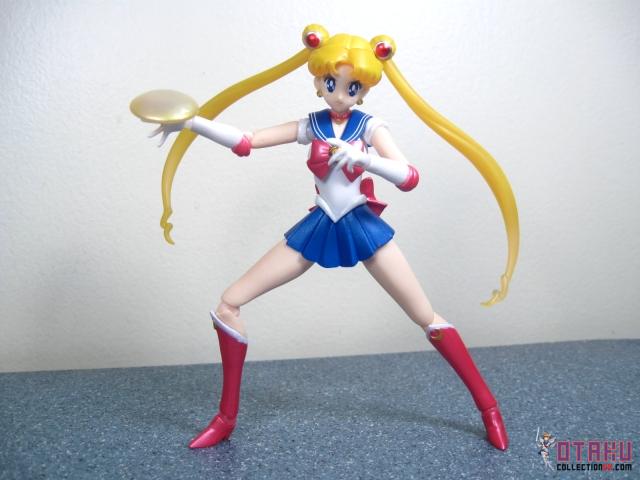 When Sailor Moon is ready to finish off the monster of the week she removes her tiara and transforms it into a delicious semi-solid gelatin based treat! 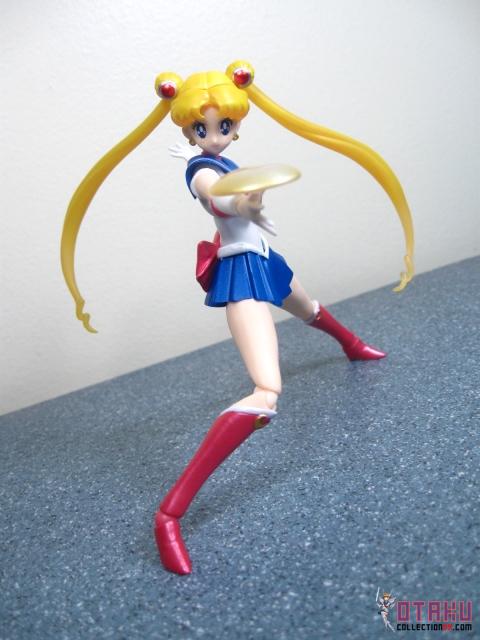 Kidding aside, the Moon Frisbee is somewhat hampered by its fidelity to the original anime as even there it was depicted as a featureless glowing yellow disk. The fact that it's permenantly attached to one of her hands means it lacks the oomph of a more kinetic looking projectile like a kamehameha effect part. Sailor Moon's dynamic posing ability does let her sell it as a cool attack though. 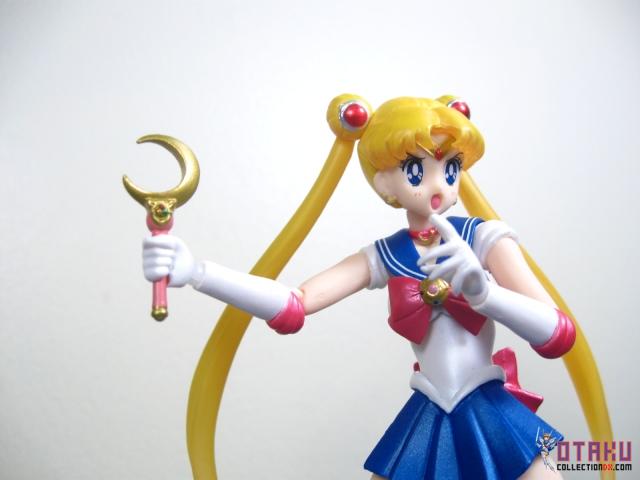 Sailor Moon wouldn't be doing her job right without the Moon Stick! It allows her to perform "Moon Healing Escalation" to purify humans turned into Youma and is also pretty handy if you have a stubborn can of peaches that needs to be opened. 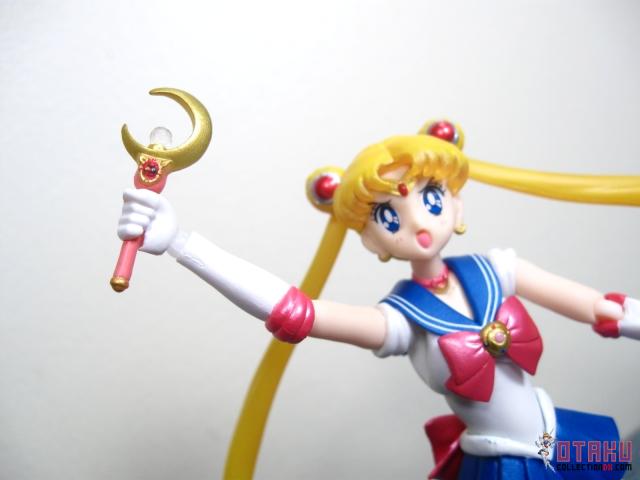 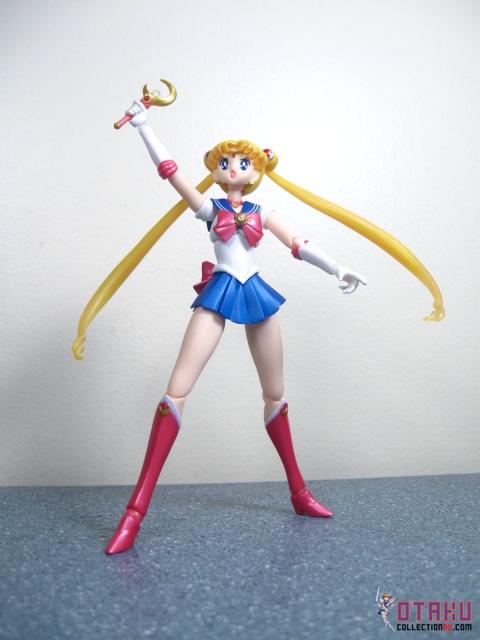 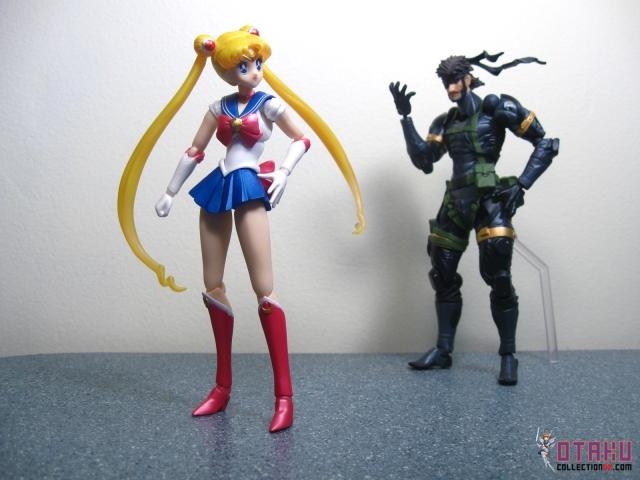 The Moon Stick is also handy for dealing with stinky old men.

"Huh! What's a little girl like you doing on the battlefield? Just come with me and you can go back to the MSF home base and play with Paz." 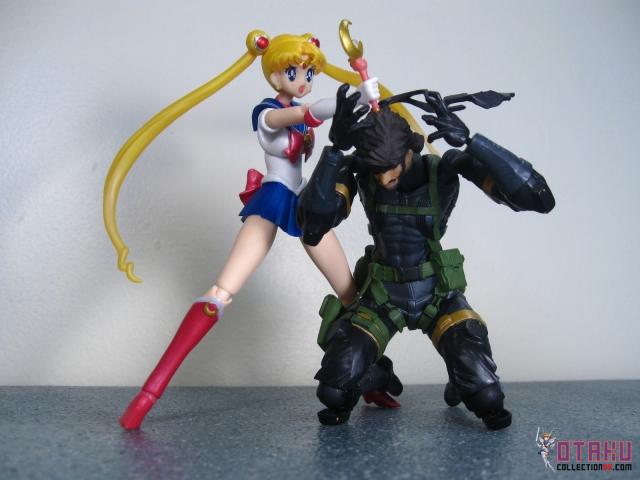 "ARGH! STOP! I'M ONLY AN ORNITHOLOGIST!" 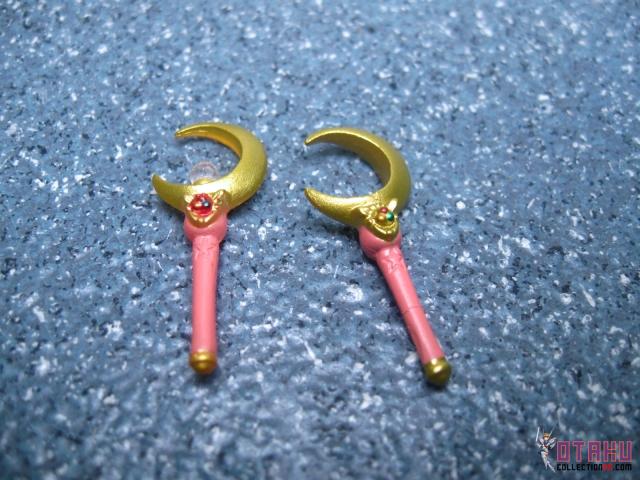 Both Moon Sticks are quite detailed for their size and fit somewhat loosely into the one right hand part designed to hold them.

No Sailor Moon figure would be complete without her friendly feline companion Dr. Luna, M.D.! 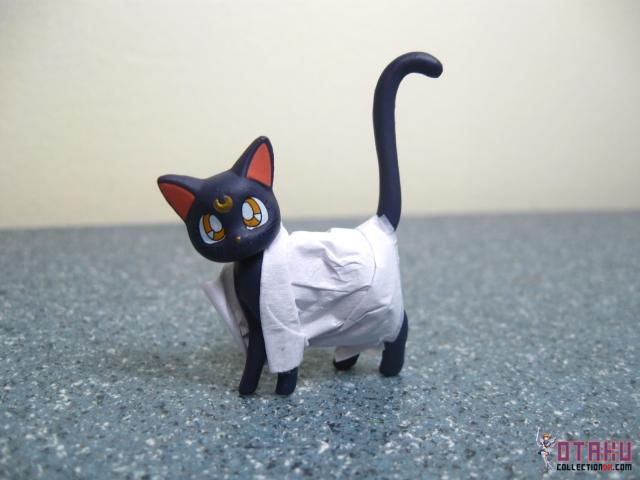 Naw I'm just kidding. The protective paper she comes wrapped in does make Luna look like a little medical kitty though. 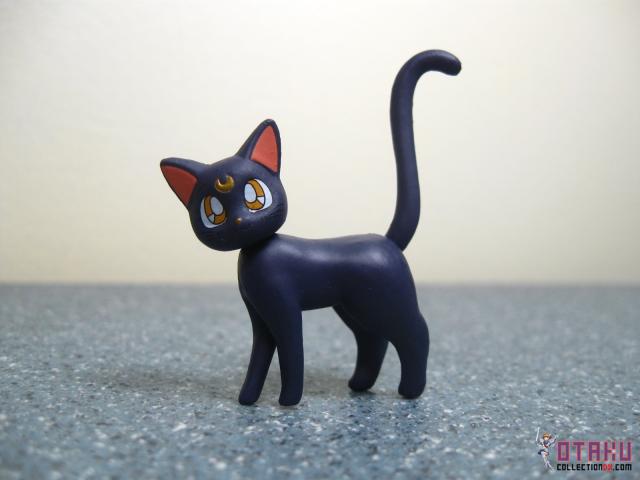 Luna is a good lil' pretty kitty who is in scale with Sailor Moon. Her bright tampographed eyes and painted moon crest stand out nicely against her black body. 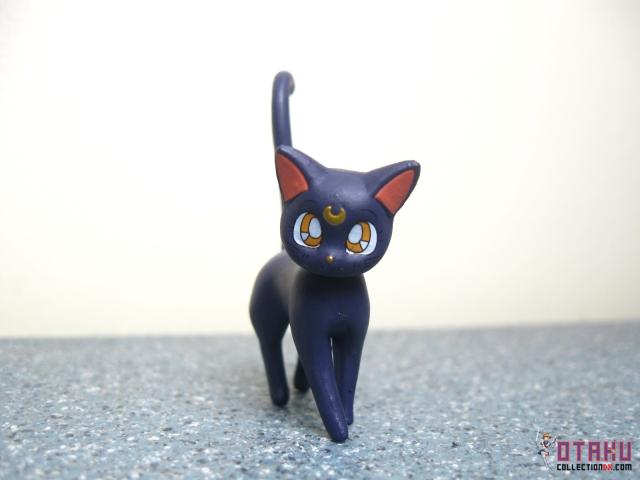 Her ball-jointed neck lets her look around like a curious cat. Luna's tail also can rotate but may be a little stuck at first. Sadly she does not come with an optional head with a more sardonic expression. 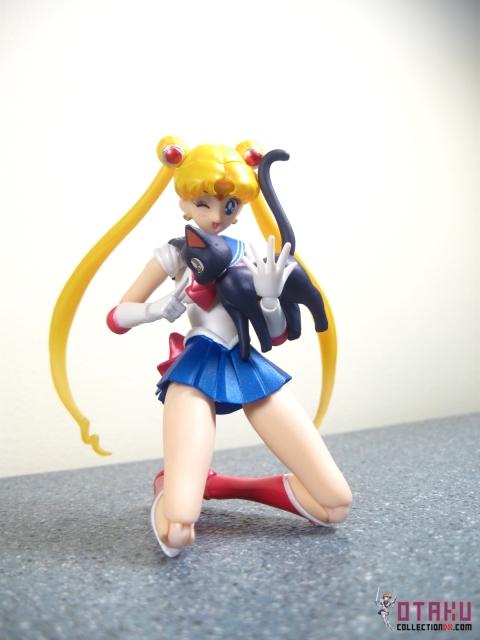 "Keep waving that finger in front of me and I'll bite it off." 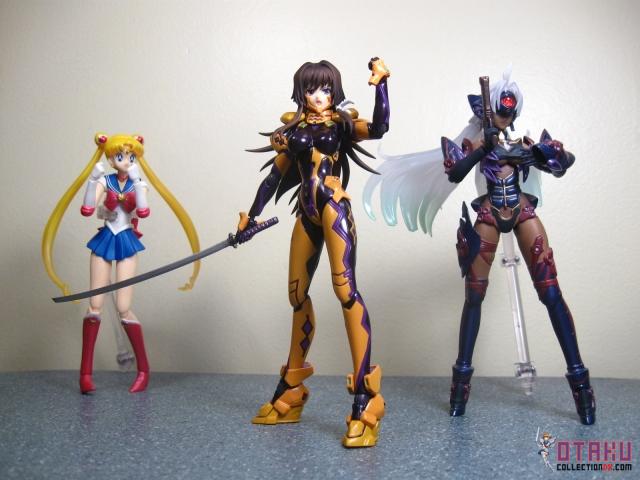 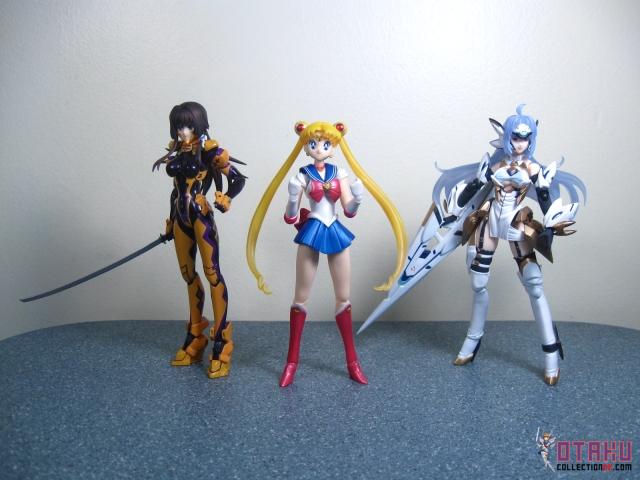 Fighting evil by lamp light... It's the Ecclectic Sailor Senshi!

While S.H. Figuarts Sailor Moon is a fine figure, I feel like she lacks some of the polish of the competing Figma line. Her fit and finish is quite excellent but it doesn't seem nearly as fine tuned as Max Factory's juggernaut of a toy line. Some of that may be just due to how she is a bit smaller than most Figmas or her fellow S.H. Figuarts though. Like the PreCure Figuarts, Sailor Moon is done in a more matte finish that envokes an anime look rather than the shinier Figma style on similar characters. One area she has a clear advantage is her purpose made joints are much better hidden than the typical standardized Figma joints so she looks a bit more on model by comparison. And I can't help but notice Sailor Moon is more modestly dressed than most of my Figmas...

My initial impression of the S.H. Figuarts Sailor Moon was middling at first. Reports of QC issues with other figures and the different feel from Figmas made be skeptical but after spending time posing her and learning how everything moves I think she is overall a well executed modern action figure. With the rest of the Inner Senshi being on the way, there's really no reason for fans not to pick this one up. Especially since Bluefin Tamashii is making them available at almost every stateside retailer you can think of!