Lately, I have been all about self-made toys, and it does not get any more self-made than designing, 3D printing, and casting your own resin figures.  Cris Rose is a London-based artist that loves robots, and makes them in resin.  Cris envisions a future where robots are ubiquitous in our lives, fulfilling roles from heavy lifting, construction, exploration, observation, and even childcare.  Cris is a huge photography nut, and the rugged, functional aesthetic of the cameras us uses and collects shows through in his robot designs.  Cris has released a number of designs, but we will cover just two in this review, since they are the two I just got. 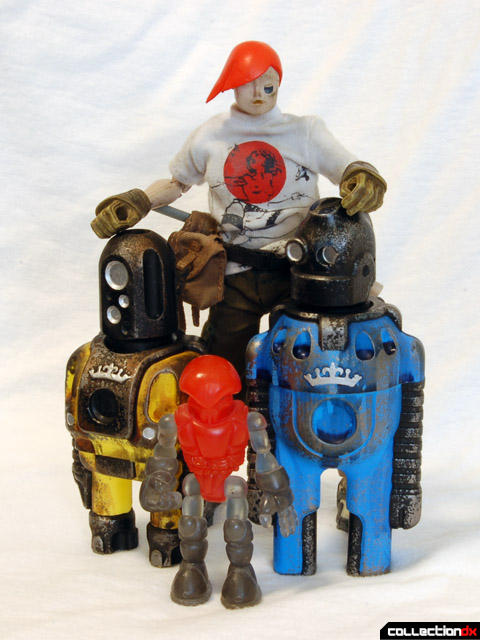 Cris’s robots are 1/12 scale, which means they match up with six inch human figures, such as 3A’s 1/12 offerings.  Most of Cris’s bots stand between three and five inches, but he also offers 1/24 scale micro versions of some designs.  Part of what makes collecting Cris’s stuff fun is the backstories of all the different bot models.  The yellow one is a Rotund Mk2, and the blue one is a Ruckus. 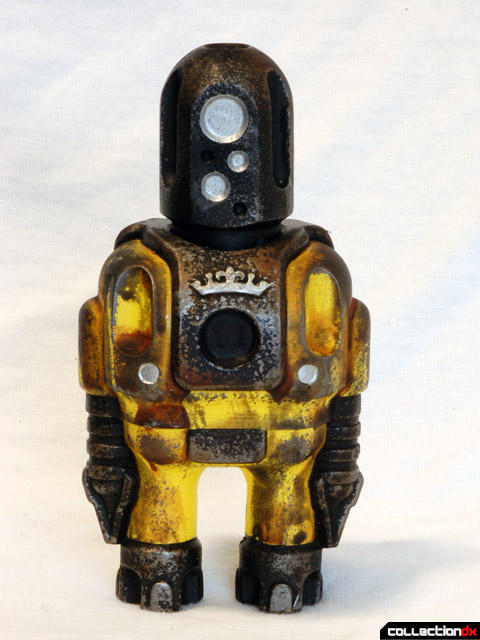 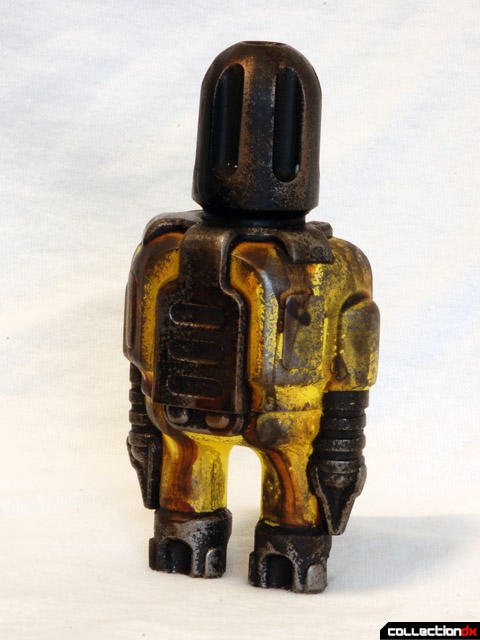 Rotund stands about four inches tall, and is articulated at the neck.  The bots pictures in this review are from a recent special release, and only come with what is pictured, but most of Cris’s newer figures come with multiple heads, designed to help the bots fulfill different specialized roles.  Rotunds are designed as companions for early teen children.  The head on this Rotund features multiple lenses and scanners for keeping an eye on its charge. 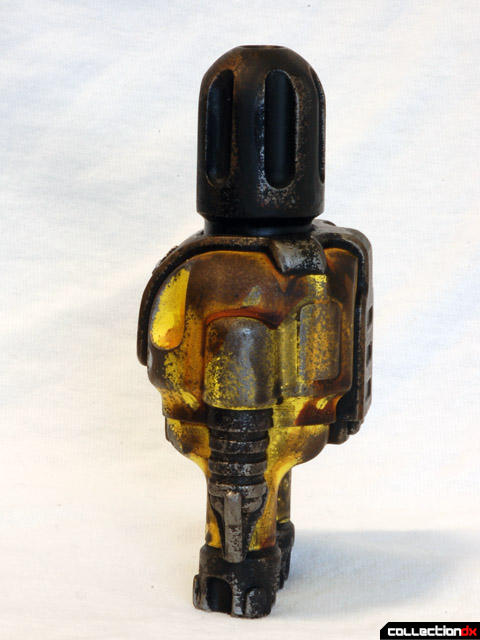 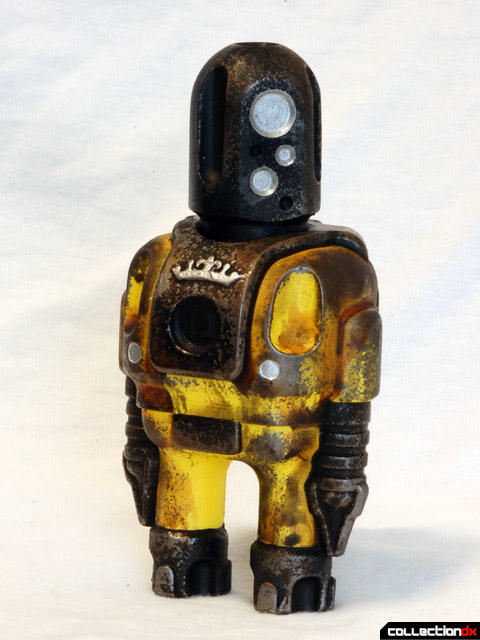 The clean designs, made on the computer and mastered using a 3D printer, are great on their own.  What sets these figures apart from many other well-designed resin figures is the paintwork.  In this future world, the robots are high-tech and functional, but still develop a worn finish as they age, prized by their owners as a symbol of how ‘wizened’ their robots are.  This Rotund sports a nice bright coat of yellow, complemented with heavy weathering done using washes and chipping effects.  These guys are made with love, and the incredible detail in the paint work reflects that. 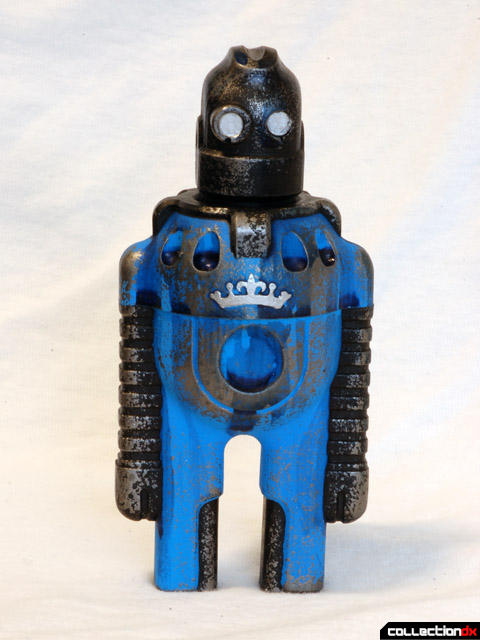 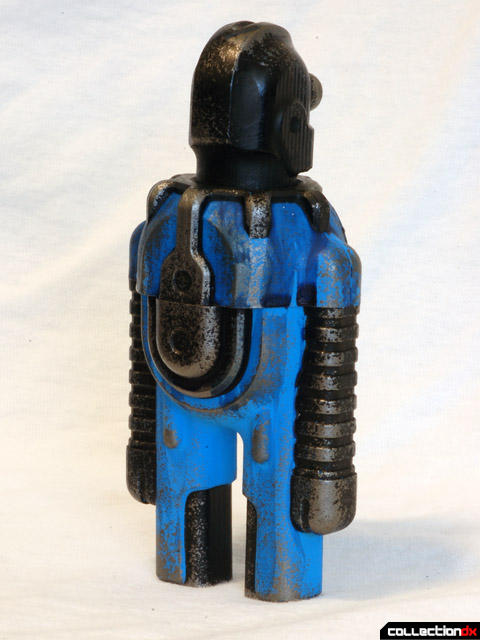 Ruckus is designed as the successor to the Rotund Mk2, functioning as a companion for more active late teens and young adults.  It’s taller and a bit more athletic, and you could picture it keeping up with kids entering college.  There’s a little bit of Iron Giant to the head sculpt, giving him a goofy charm.  The paint on this guy is a little less worn, but still plenty detailed, and I like the effect of the blue wash on the silver parts. 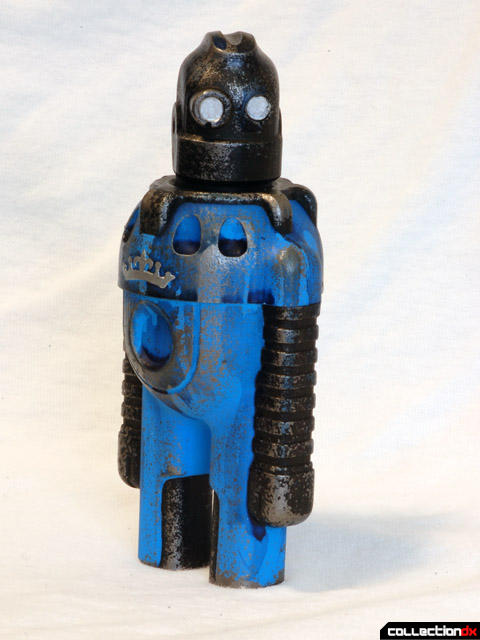 Coming from 3D-printed prototypes, these figures are sharp and precise, and almost flawlessly cast.  My Ruckus has one or two air-bubbles on the head sculpt, but most of the Ruckuses I have seen do not.  There’s always a learning period when making casts from a new mold, and the bubbles happen to fall on the weathered areas, making them tough to notice.  Other than that, there are no mold seams at all, to the point that I cannot figure out how the casts sit in the mold. 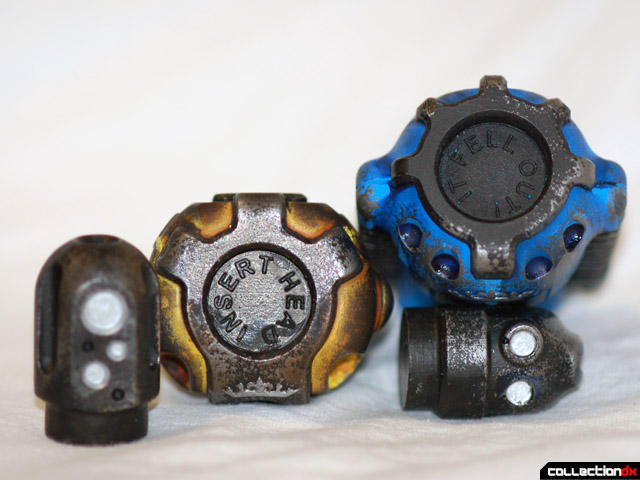 The heads are separate, and sit loosely on the necks.  These are designed primarily for display, but some people might find that odd.  There is a neat Easter Egg in the neck, though. 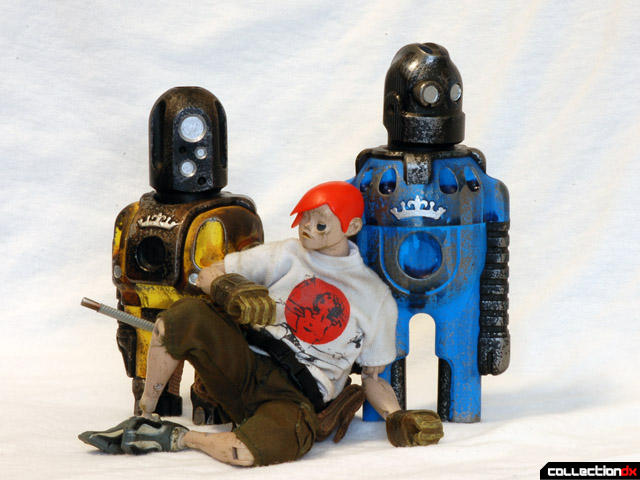 On their own they are nice looking figures, but they really pop when posed alongside humans or in a setting.  Here, Hideo takes a break among his two new companions. 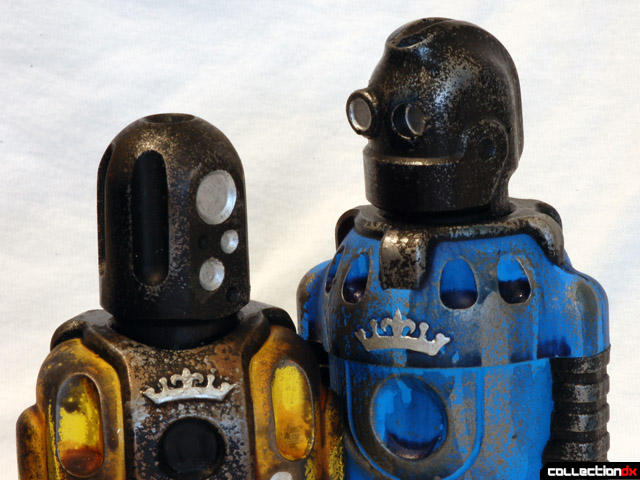 As hand-made short run resin figures, these are not for everyone, but if you are interested in indy toys and clean, classy robot designs they are worth a look.  A pack of the minis runs between $30 and $50.  The ones I purchased were a little more expensive ($125 for Rotund, and $150 for Ruckus), since they were one-offs and bought from a show, but production Rotund Mk2s from Cris run $85.  This was the debut of Ruckus, and I would expect him to run a little more, but around the same range.  You can see past releases and keep an eye out for new figures on Cris's store page.

Ruckus' head really reminds me of Clank from Ratchet and Clank. These guys definitely have a neat aesthetic going on.

Prometheum5, are you friends with Cris Rose?

I follow him on Twitter and have talked to him directly, but I don't really know him personally. He's a guy I know of that makes stuff I think is neat. Why do you ask?