When the Power of the Primes Rodimus Prime was revealed I was, and still am only mildly interested in it. It seemed like a pretty good mold to me, I was really happy about getting a Winnebago alt mode, and really everything looked good about it to me, but I still wasn’t completely sold on it because it just being another normal Rodimus Prime wasn’t enough for me at the time, little did I know that only a couple months later the deliciously evil Rodimus Unicronus would be released, taking a mold that I was already interested in and making it a shattered glass Rodimus homage injected with that little extra bit of personality and uniqueness that I was after. My first impressions told me It took a good mold and made it great, but after overpaying about for it by getting it for $65 and by actually having the figure I didn’t know if I would actually love it as much as I initially thought. It turns out that Rodimus Unicronus is probably one of my favorite figures I’ve gotten this year, and even the fact that I overpaid was made all the more worth when I finally got the figure and saw how great it really is!

Rodimus Unicronus is split into two parts that combine in two ways, first of all, is the shattered glass Hot Rod. In vehicle mode he is about the traditional deluxe size and looks like a very by the numbers rendition of his G1 vehicle mode, but given an awesome black, silver, and purple makeover with translucent red. In addition to that, his Decepticon symbol is surrounded by a literally edgier version of Hot Rod’s hood flames. The car mode looks great for the most part, but in some ways such as the blocky shape and the abundance of gaps make this alt mode only about average for me, instead of being the absolute smash I wanted it to be. It’s really not the main appeal of this set, however, so I can’t be too bothered by it, because it’s still pretty good. Hot Rod’s transformation is also pretty by the numbers, with the sides forming the arms, the back wheel sections forming the legs, and the swiveling to his back, but one aspect that shakes up the formula a little bit is the fact that Hot Rod’s hood chest in robot mode is actually fake, as the car mode’s hood is covered by the spoiler in robot mode. Speaking of robot mode, I actually like Hot Rod’s a lot. The fake hood chest does a lot to make the mode look a lot more dynamic than it otherwise would, and I especially really love the head sculpt, his serious face from the first use of the mold just looks so much more evil in these colors! The proportions are a little weird, with the thighs being a little too long, along with the arms. These idiosyncrasies bothered me at first, but I’ve had this figure for about a week and they really don’t bother me anymore, especially when he is making use of his dual guns, an addition I think is not only really cool looking, but does a lot to mitigate the flawed proportions. The articulation is also a little hindered especially in the shoulders, but really all of these issues don’t mean much to me when the figure always looks so cool and feels so solid. 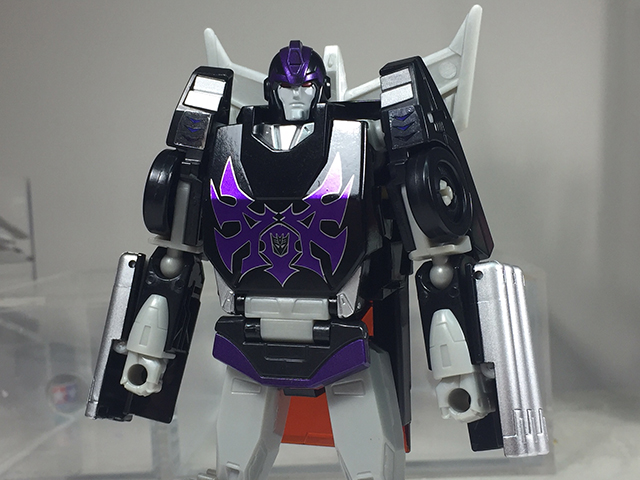 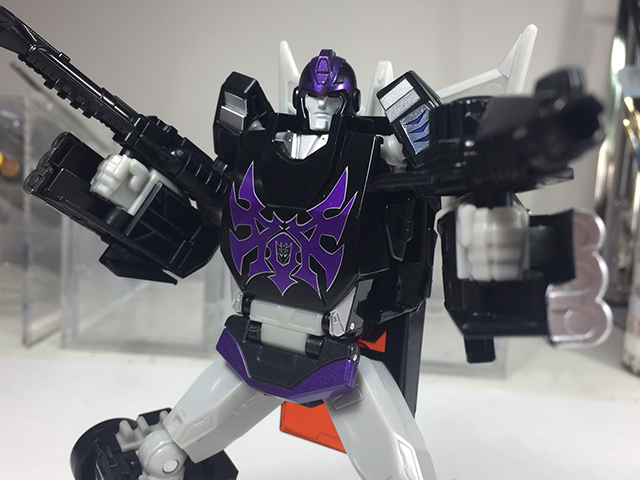 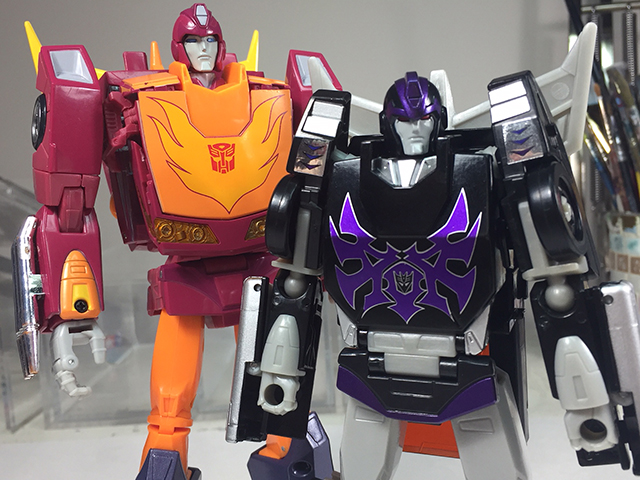 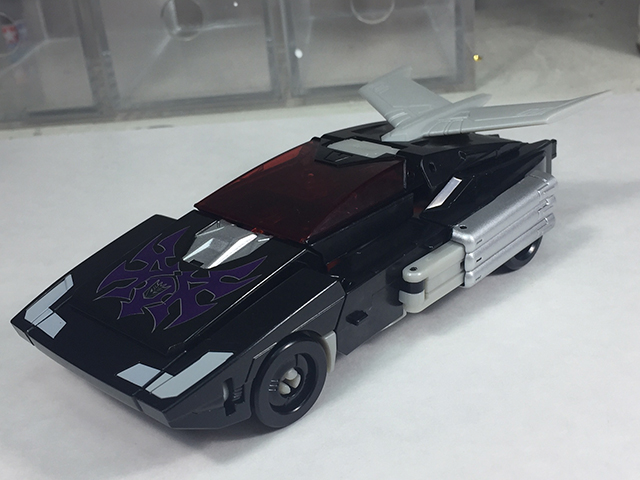 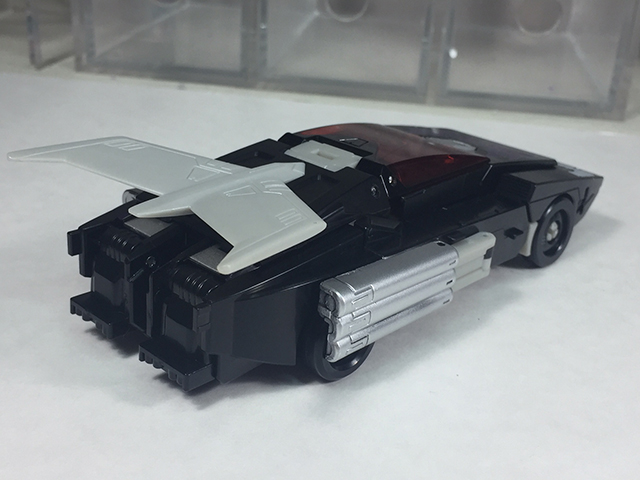 The second half is the core block that reminds me a little bit of a Mugenbine’s core block piece, as it’s basically a base for both combined modes to be assembled around. In its vehicle mode configuration, it combines with Hot Rod’s vehicle mode but actually, it’s not that enjoyable to do. It was weirdly difficult the first time, but I’m pretty used to it now, and it’s not so bad. You attach Hot Rod’s car mode, tab it into the block’s spoiler piece, fold the two side panels around the vehicle, fold down the exhaust pipe extensions, and finally tab it all together. Once complete it is very secure, but as I said before I actually had kind of a hard time performing this the first time! That being said, you might have no trouble, so don’t be too worried by my first experience! In the complete Winnebago mode, Rodimus Unicronus looks very good and really cool to me. One thing that really detracts from this mode are the stickers. They didn’t bother me on Hot Rod, but when combined in vehicle mode, the flame and Decepticon stickers just look so cheap and flimsy to me! They definitely don’t ruin the look to me, they just dampen it a little bit, because otherwise this mode looks amazing and is really solid, if it weren’t for the stickers I would absolutely love it, but still I think it’s great! 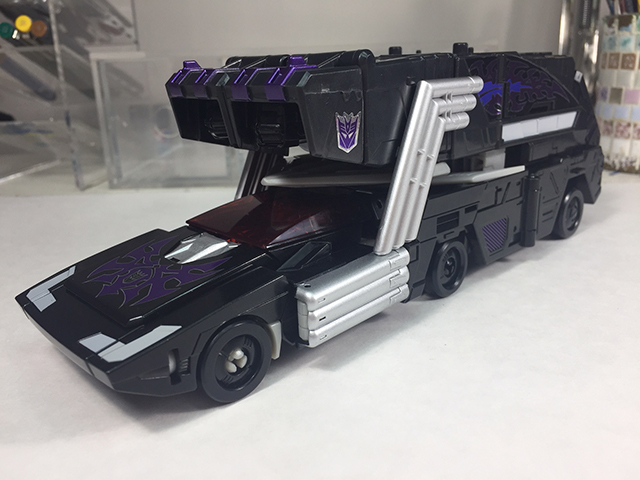 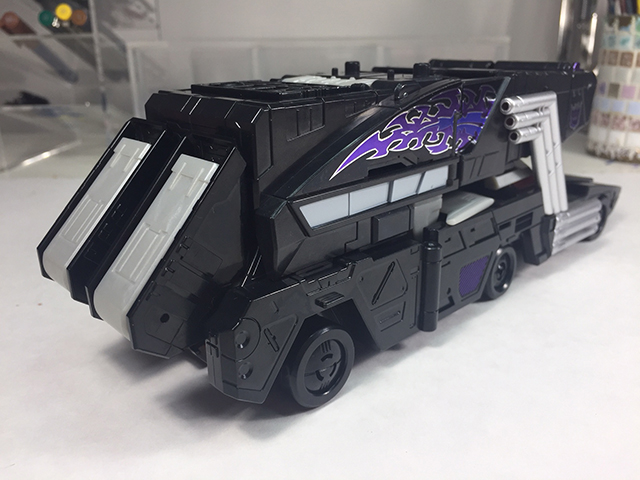 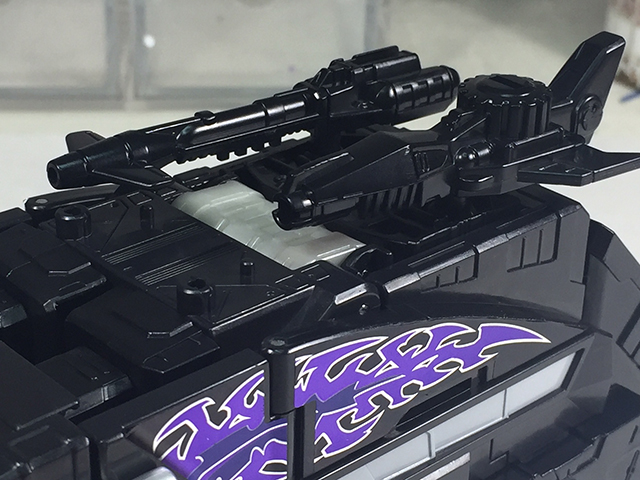 When combined for Rodimus Unicronus’s robot mode, Hot Rod is splayed out and opened up the form his chest head and shoulders, while the core block piece unfolds satisfyingly to create the legs, body, and arms. One aspect that might disappoint some people is the parts forming, as the arms must be detached from the core block for robot mode. Honestly I don’t mind this at all, as Super Sentai and Brave Series figures among many others have made me feel pretty alright with parts forming as long as it’s for a combination sequence like this, if it was much more than this however, I would definitely have a problem with it. 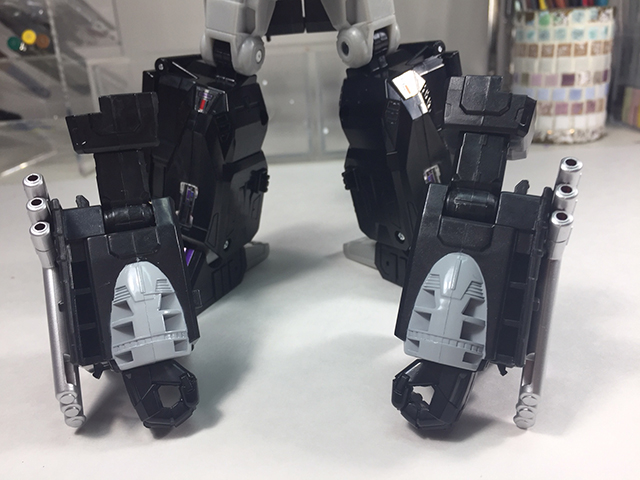 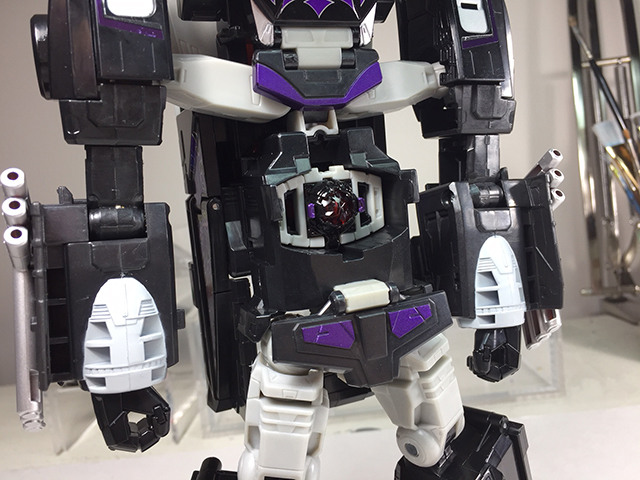 Considering the minor problems I’ve had thus far in this review, it is here where all of those problems become pretty irrelevant to me. The stickers on the core block part are weak, the proportions in Hot Rod’s robot mode aren’t quite right, and his solo vehicle mode is blocky and has some gaps, but when you actually combine everything together into Rodimus Unicronus’s robot mode, it’s amazing how much of that I can forgive simply because the combination process is really fun, and the result is very impressive. The construction here seems very solid, as both Hot Rod and the separate arm parts lock together very securely, and while simply detachable they only come off when you want them to. Aesthetically, I really love how Rodimus Unicronus looks, the color scheme while simple is just awesome, and the ornamentation around his Decepticon symbol is just as great. My favorite part by far is the new head sculpt, as it takes the more traditional Rodimus head of the original mold use, and gives it a deliciously villainous mustache goatee combo along with a vicious electric red visor. As soon as I saw this head sculpt for the first time it immediately sold me on the figure, and although that might be a pretty minor motivation to spend $65, but I couldn’t be happier with the figure as a whole, and I don’t regret my decision. Rodimus Unicronus’s articulation is pretty standard for a Transformer with a wrist joint, shoulder butterfly joint, and ankle pivot separating it from an average deluxe or voyager. One aspect that has bothered people are the shoulder joints, as they are Hot Rod’s robot mode thighs and look sort of strange when Rodimus Unicronus’s arms are moved outward, but honestly this doesn’t bother me that much. My brother brought up to me how awful he thought the shoulders looked, but really I don’t feel the same way. They don’t look amazing or anything, but I can’t be too bothered by them, especially considering his arms don’t move out very far to begin with. One final aspect about the combined form is the gun. Comprised of both guns connected together, Rodimus Unicronus’s gun actually looks pretty good, which is interesting to me as I typically don’t like really thin combined weapons like this very often. 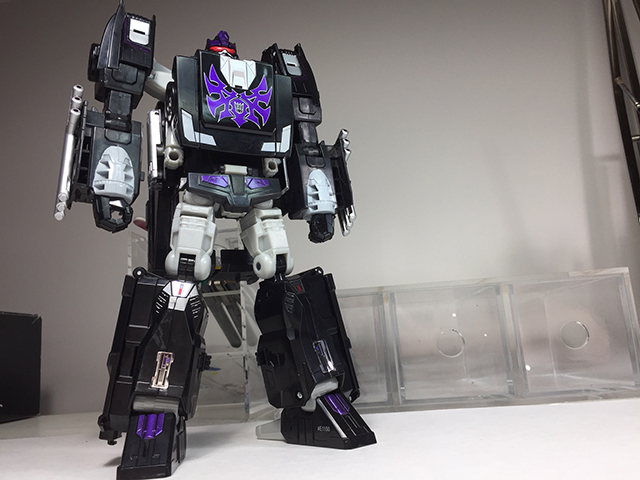 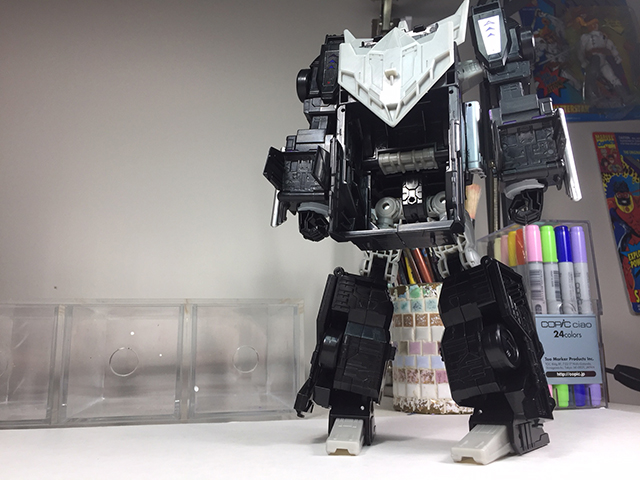 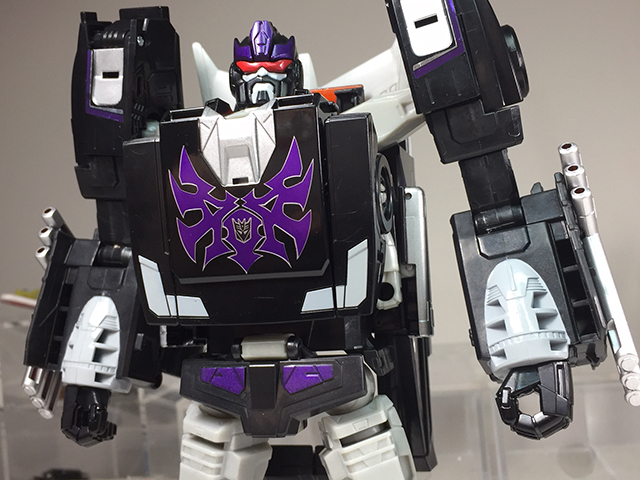 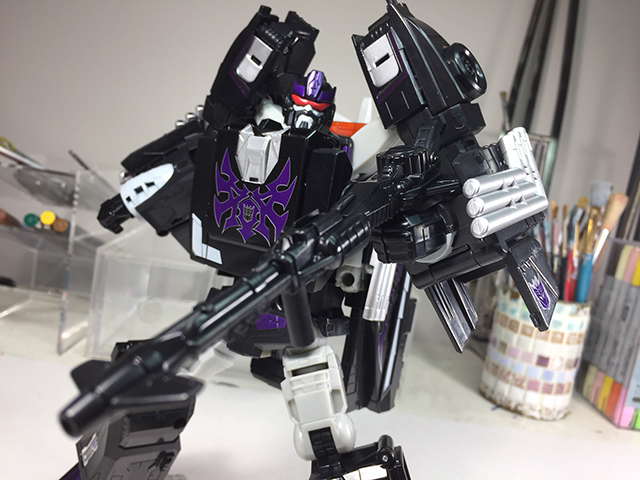 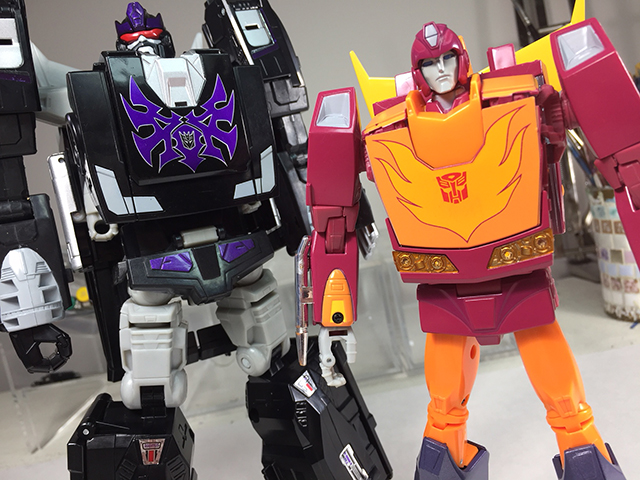 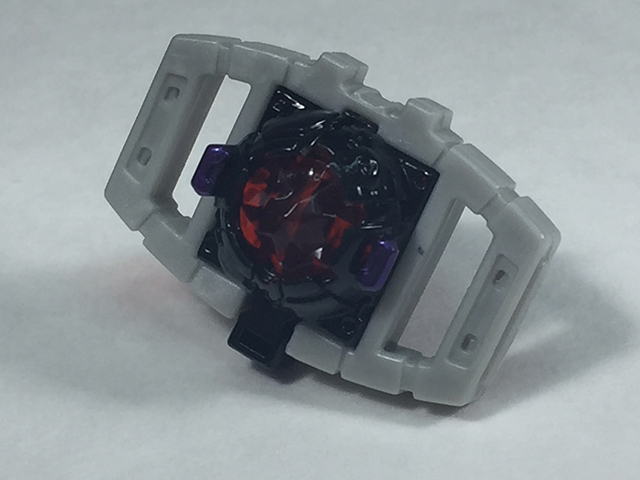 Overall I honestly can’t recommend Rodimus Unicronus enough. He has definite flaws as any figure does, but to me they are far outweighed by solid transformations from every mode, an awesome color scheme, some stickers that aren’t too bad to balance out the few that are, a very solid construction, and an amazing head sculpt that gives this mold a lot more personality than it’s first use. $65 or $50 might be a lot to pay for one figure, but to me, Rodimus Unicronus is definitely worth the money.