As most of you know, Transformers are available in Japan under the Takara Tomy brand. We have Transformers here state-side under the Hasbro brand. While Hasbro caters more to the younger crowd, Takara seems to cater more to a collector crowd as evident in their pricing fo some figures. I happened to pick up both versions so instead of deciding which one to do a review of, I decided that the review will be of the Hasbro version since it is the easiest to acquire here in the US, with the Takara version along side of it for comparison. This should help you guys out if you are on the fence about which one to choose.

To begin, we will take a look at the boxes that these releases come in. They both feature blister pack design with a cardboard backing. The Hasbro release is the standard issue Transformers Animated design with the TRU Exclusive logo on the front. The back has a simple prototype figure (a horribly painted prototype by the way) on the back in its robot mode on the left and the vehicle mode to the right. 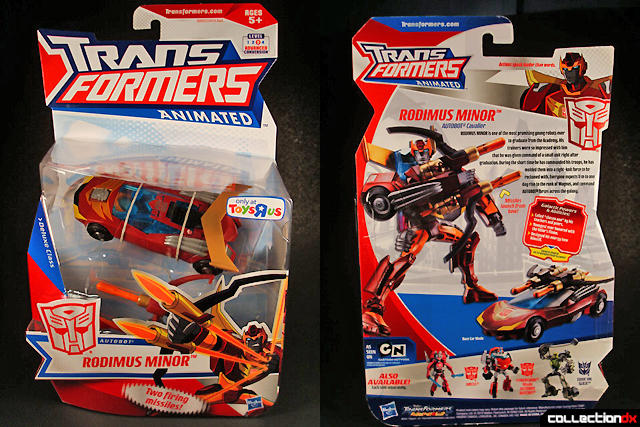 The Takara version is a bit more aggressive in the graphics featuring a design that caters more to a more mature crowd. The Hasbro figure is held in with paper twine while the Takara version is held down with plastic insulated wire. The back of the Takara packaging once again goes a bit further and adds some action to the figure being photographed. They set up a mock battle full of explosions and great effects. Both show other figures in the lineup at the bottom of the package. 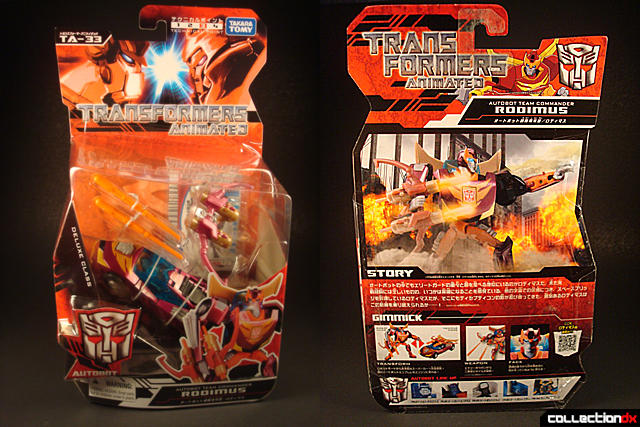 From this point on, the Hasbro version will be kept on the left side of the picture and the Takara on the right for side by side pictures.

Once we untie the figures from the package, we instantly see that there is a noticeable difference between the two. Before you read on, which one catches your eye or interest more? 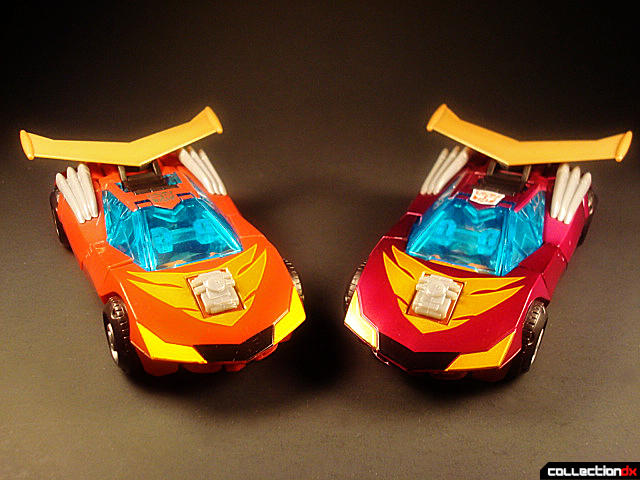 From the top we can see their Autobot logos. The Hasbro version has a simple silver one color design, while the Takara has a classic two color design. Notice his face peeking through the windshield. 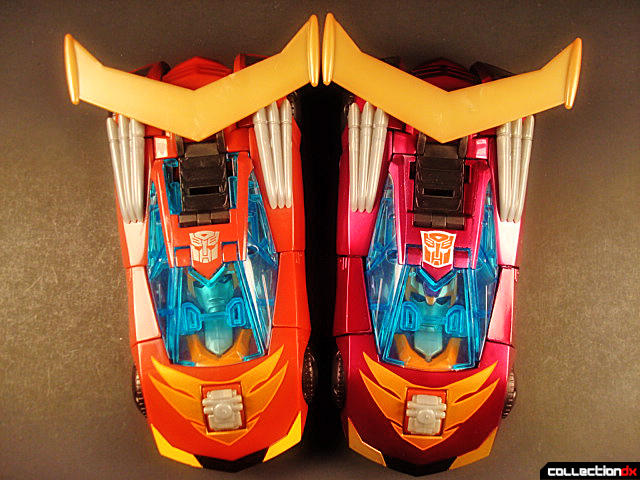 The only downside to its vehicle form aside from his visible head is this rather huge gap in the back which would have easily been covered if they decided to include a tailpipe/weapon like the Classics Rodimus. Say hello to his butt that is visible inside that gap. 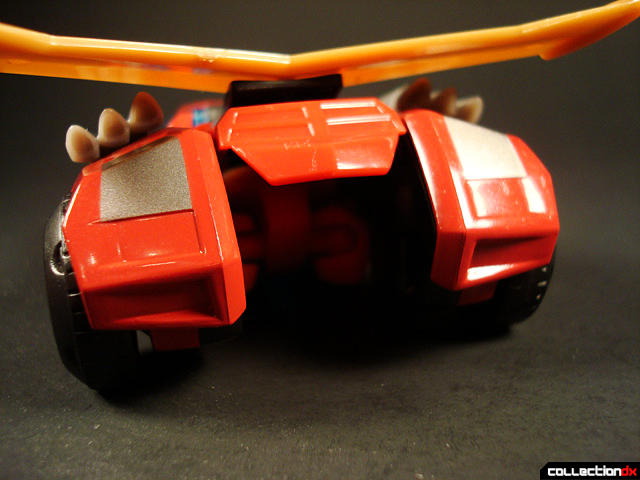 Instead, they give him a rather silly bow inspired weapon that looks like a roof-rack for a deer hunter. The missile mechanism works in this mode although the missile ends are shoved onto the spoiler a bit. 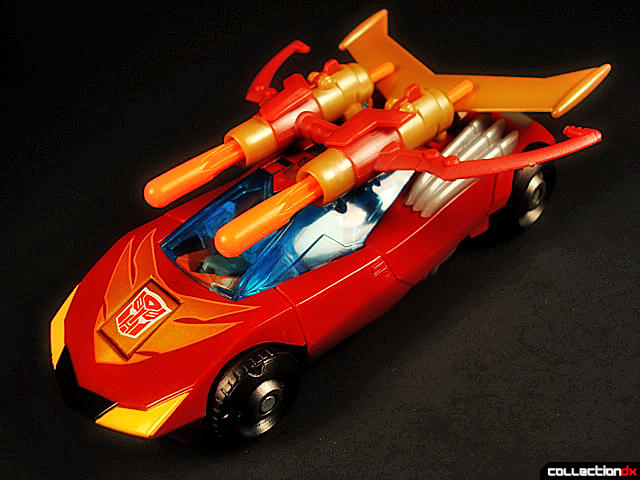 Once we transform the figure into it's main robot mode, we are left with a rather nice looking figure. Please watch the video at the end of the review if you want to check out the transformation. 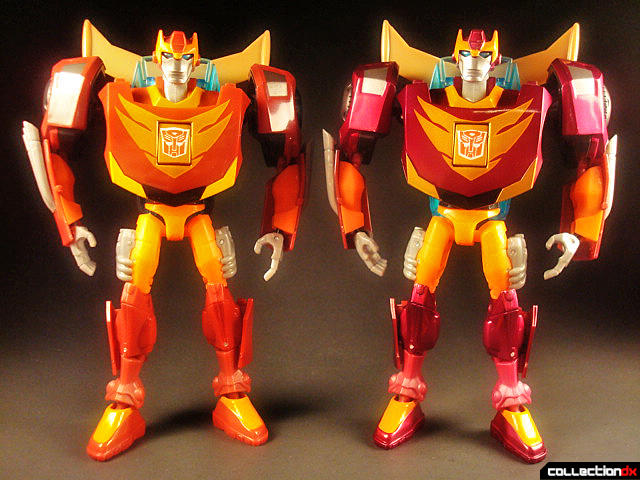 This is one of those figures that cleans up real nice in Robot mode. There is no obnoxiously huge parts hanging off anywhere. Everything transforms rather cleanly. 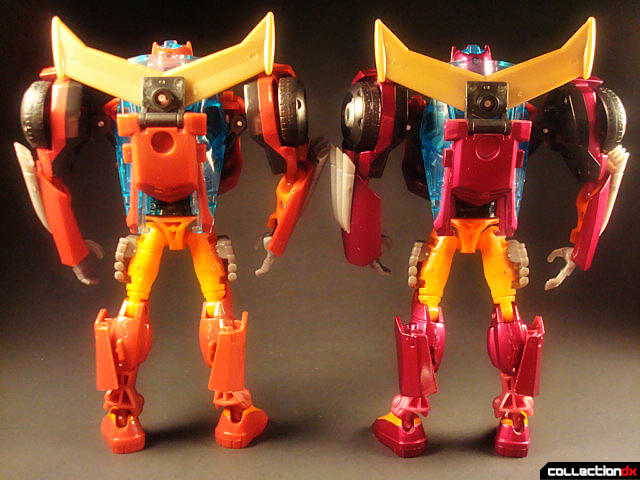 Here they are showing off their bow weapons. Identical in mold and function with the only difference being their plastic color. The plastic closely matches the corresponding figures' color. The gold trim on the weapons is identical in color for both. 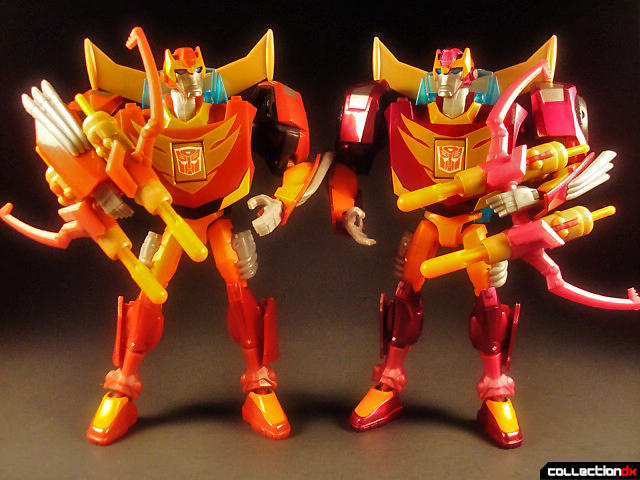 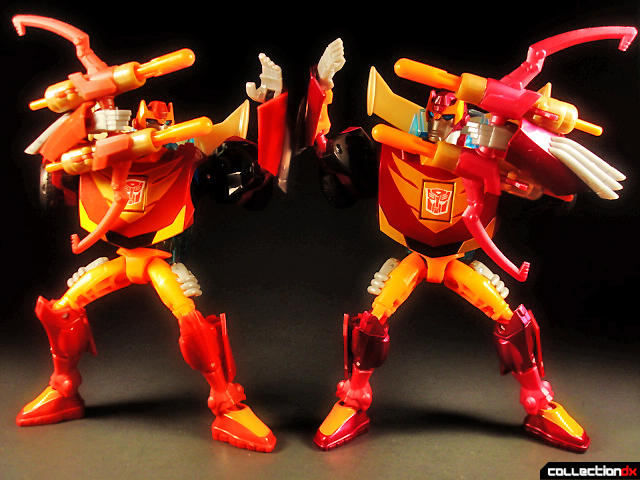 Rodimus was designed with some really cool light piping. Check this out.

I have made a simple video review so you can see what's up with these figures and check out the transformation.

I left this for last because it may just be an isolated incident. While both these figures are identical aside from color and price, I did notice that the Takara version had some QC issues namely in the paint department. Of course, the Hasbro has a lot less paint apps so logic would suggest the Takara would be prone to show more paint issues, but most of the issues deal with paint apps that are present on both releases.

Time for nitpicking. The picture below is of the issues on my Takara specimen. Starting with the left we see something that required more work than necessary to fix. Apparently Takara painted the chest piece, applied an Autobot logo and then realized the logo was printed upside down. So instead of swapping the piece for another, they painted over the logo and then reapplied a sloppy logo a second time! The right side of the photo shows the foot where apparently some paint was missing so an assembly line worker grabbed a brush a quickly swiped it on the foot to "hide" the mistake. There are also parts where paint didn't reach and visible paint chips on the doors. And finally, a panel on his leg came loose which keeps the door from fitting flush in vehicle mode. Boo. My Hasbro version was perfect and much cheaper. The Hasbro is $14.99-$16.99 while the Takara is 2300 Yen (almost $30!)

So in closing, I hope I showed enough of the two figures side by side to make an informed decision. While my Takara version had issues, this doesn't mean yours will. If you prefer the Hasbro and/or have limited funds, just head over to TRU and pick up the Hasbro version as it's still available. If you prefer the added paint apps/color and have a bit more to spend, you can opt for the Takara. Whichever you choose, you wont be disappointed. 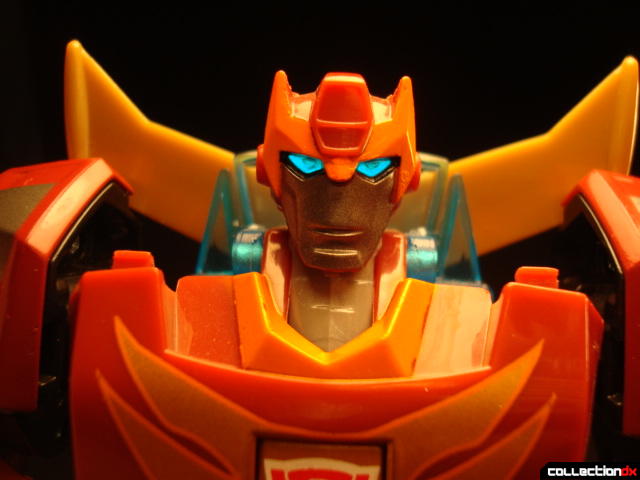 Nice review, in comparing the two versions side-by-side so much.

I can easily settle for the Hasbro version. What an awesome toy!

My weakness is reds :(

Yeah, there really is no reason to pay more unless you absolutely have to have the Takara paintjob. The Hasbro is great. Probably one of my most transformed animateds.

I frequently- though not always- adjust my pictures now not just with the camera settings but also the simple editing software in Microsoft Pictures Gallery.

While the takara version wins hands down for color, the hasbro version wins for price. The only thing that will affect your decision in which version to get is what your collection demands.

The only complaint that I have that robs this toy from getting a complete 5 out of 5 would be the right arm constantly popping out of the socket whenver you transform it and no matter how careful you may be. Since the hasbro and the takara share the exact same mold, both toys would be suffering from the same problem.

Overall, Rodimus Prime is one great toy and is one of the best Animated toys made.

If you're not a fan of the Animated designs there's also the Classics version, FansProjects' "Protector" armor and the upcoming Masterpiece edition.

I hate "animated" looking figures from long running lines. I've been buying
transformers for years,and the majority match up with each other,and now bam,at one end of the shelf there's some weird guys who look like they're from Sponge Bob. Same thing with Star Wars.

I think they should have made them the characters/vehicles from the show,just realistically proportioned.

"I think they should have made them the characters/vehicles from the show,just realistically proportioned."

I recommend you checking out the new Transformers: Prime CGI cartoon coming out. The latest designs should remedy all your "Animated" problems away as much as they remedied all my "Movie" problems away.

Wow the expression on its face reminds me a lot of Obama.
It looks like he just finished saying, "I hate Hillary" and caused Optimus's death.