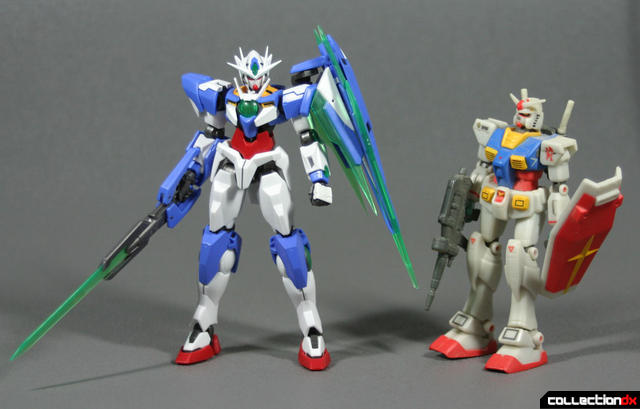 When Gundam was still young in the United States back in the nineties, there was not much in plastic model kits, so I tried my hand in the “Mobile Suits in Action” line to fill in the blanks. I remember my first was the RX-78-2 but its quality left me disappointed. After that there was the RGM-89 Jegan, one of the last Gundam figures sold domestically. It was actually pretty good since there was no High Grade Universal Century (and still no Master Grade) model kit of the design at the time, but the hit or miss quality of the MSiA line made Gundam action figures something I generally avoided.

Reminding me to think a little differently is the Robot Spirits “Side MS” release of 00 Quanta from Gundam 00. 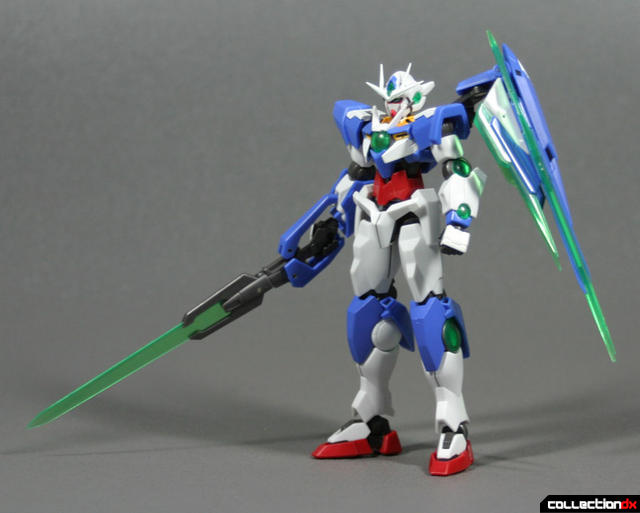 The time of the dialogues has come.
The GNT-0000 00 Qan[T], or “00 Quanta” is Setsuna F. Seiei’s final mobile suit debuting in the theatrical film “Gundam 00: Awakening of the Trailblazer.” The Gundam is the last of Celestial Being’s fifth generation mobile suits, combining the elements of Setsuna’s previous Gundam Exia and 00 Gundam into a single suit of limitless potential.
The movie conclusion to the epic Anno Domini series marks a number of benchmarks for the Gundam franchise by being one of the few original screenplays as the of conclusion for the 00 storyline and for being the first Gundam series to openly portray aliens as the final encounter. In the film, the arrival of the “Extraterrestrial Living metal Shape-shifters” (or ELS) serves as the catalyst for humanity’s eventual expansion into space in events which the true meaning of Celestial Being and their Gundams are revealed. 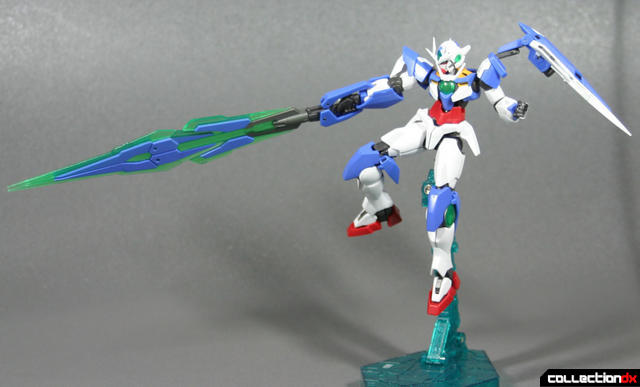 The Robot Spirits line stands as an example of just how far Bandai’s level of quality has come over the years since the Mobile Suits in Action series. Since its introduction, the Robot Spirits line has finally given Bandai the chance to bridge between series such as Macross Frontier, Full Metal Panic, Code Geass and Gundam into unique ‘Sides’ for each franchise. The 00 Qan[T] marks the 76th entry for the Gundam “Side MS” of the series. 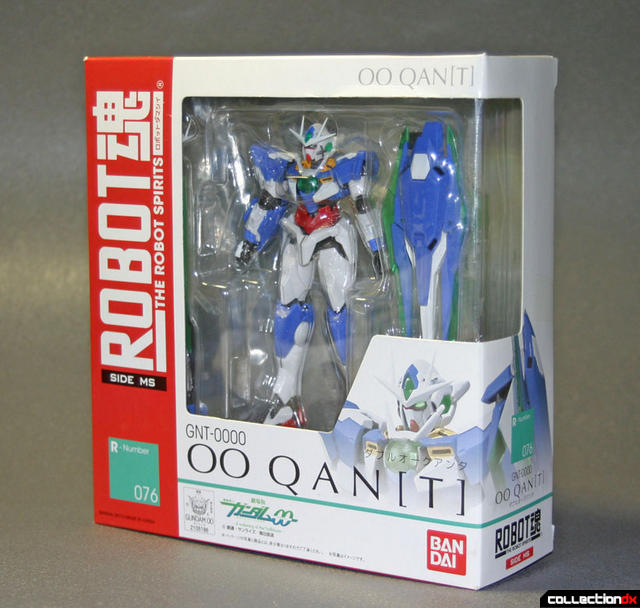 The 00 Quanta comes packaged in the standard Robot Spirits packaging with the window tray displaying the figure alongside its primary accessories. Out of the box, the tray comes fully loaded with the assortment of accessories exclusive to the figure. 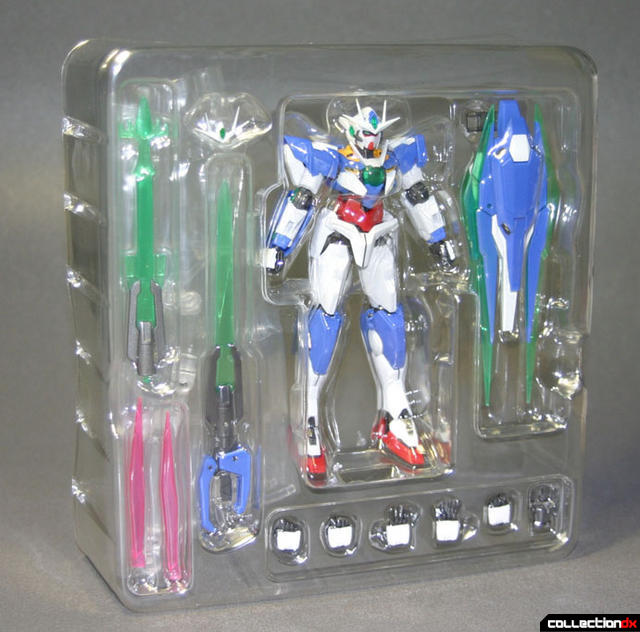 Despite my hesitation towards Gundam action figures, the 00 Quanta is a well built piece. The figure is molded in durable materials and features clear parts for its GN particle condensers located at the joints, torso, head, and weapons. 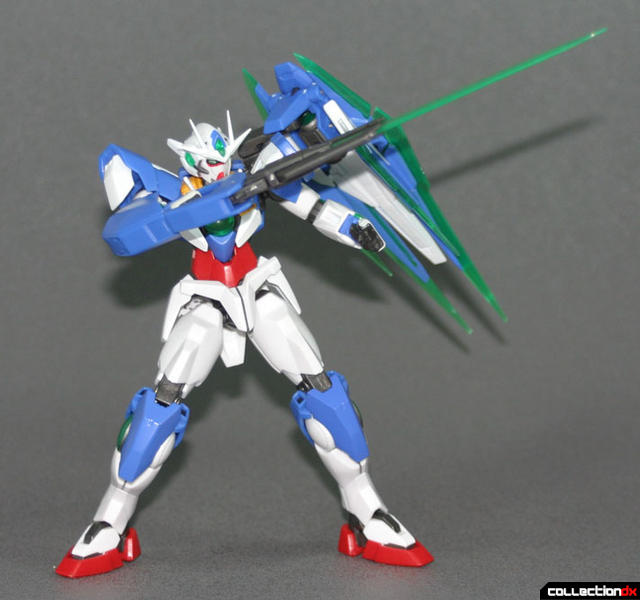 Out of the package, the Robot Spirits 00 Quanta is a solidly built entry into the Robot Spirits line up. The 00 Quanta stands at about 5 inches tall, which is close to the height of a common HG 1/144 scale model. In the case of the 00 Quanta, it stands shorter than other models from the 00 series by comparison. 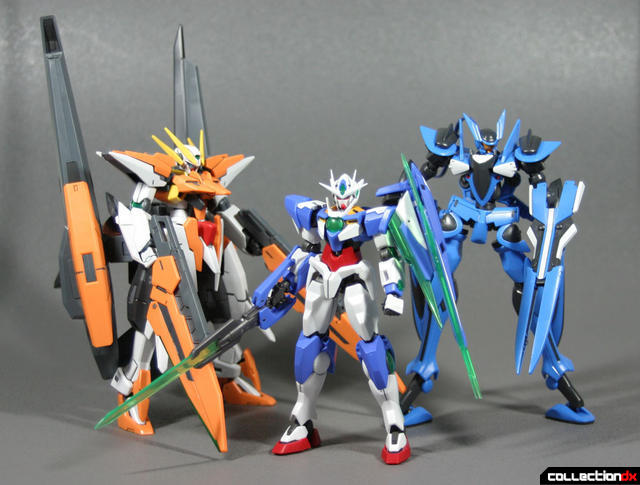 Using a combined arrangement of ball socket joints around metal pin hinges, the 00 Quanta’s range of articulation is excellent. It seems like Bandai was taking notes from Kaiyodo’s Revoltech line for its figures and the joint style exemplifies the “Spirit” of its multi-universal robot line. 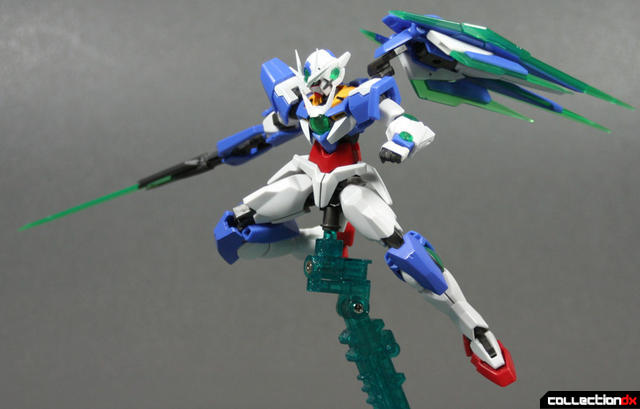 The Anno Domini Gundams were always spectacles of articulation, especially the 00 Gundam. As the 00 Quanta’s design is virtually identical to its predecessor, it is no surprise that it inherits the same level of mobility.

The Quanta features not only the Gundam’s double jointed knee, but also a series of compound joints (a ball socket that blends into a hinge) in areas such as the ankles, abdomen and even the neck to improve the subtle postures. The wrists also feature a swiveling hinge which becomes useful for improving the hand’s grasp of its weapon. The only hindrance is the GN Shield binder which comes against the left side and limits the left arm’s full range of motion compared to its right arm. 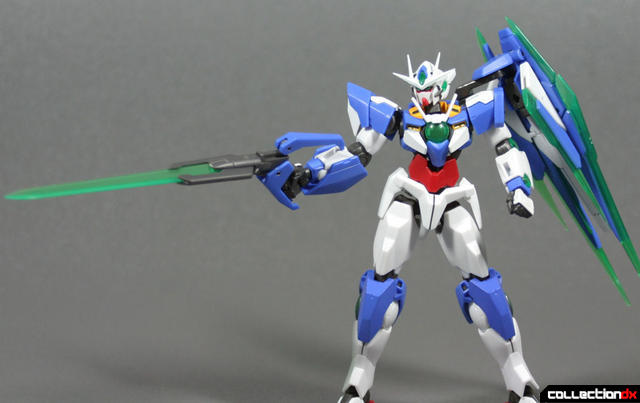 The GN Shield Binder is also articulated in ways that match its design. It can rotate into position on the Gundam’s back and articulate the second GN Drive mounted on it to line up against the torso. This is just one of the levels of attention to detail that the Robot Spirits line carries. 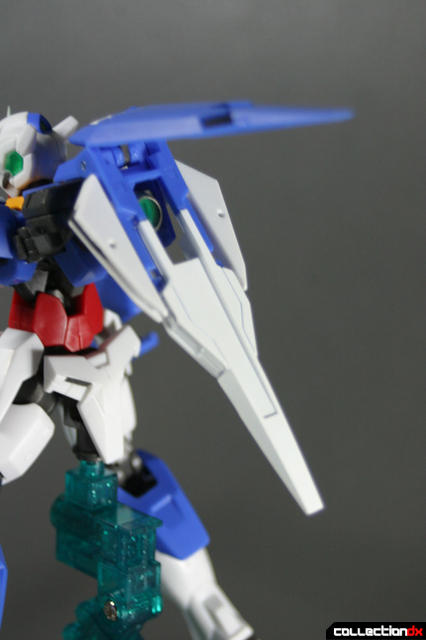 The 00 Quanta is the new Seven Swords. 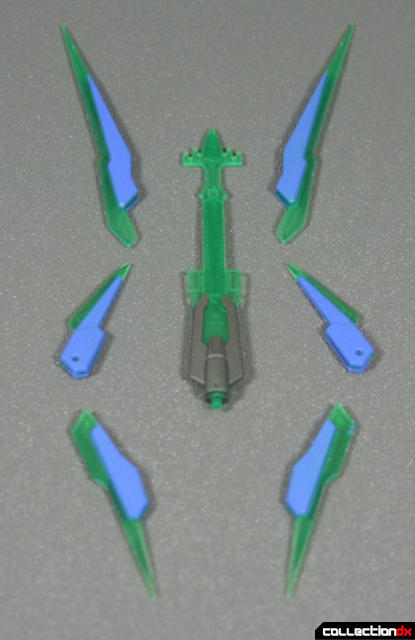 While the Gundam 00’s movie blazes new trails with its direction, the 00 Quanta carries on a tradition of the ‘final’ Gundam. Like the RX-93 Nu Gundam (Amuro Ray’s last Gundam from Char’s Counterattack) which used weapons called “Funnels,” the 00 Quanta uses a remote guided weapon system called “Bits” which are specialized weapons based on its combats theme. 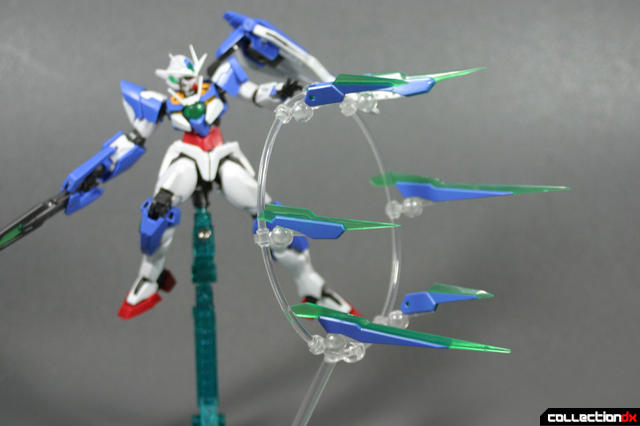 These “Sword Bits” are an arrangement of GN-particle infused blades which can be used to form a defensive GN Barrier shield and link together on the Gundam’s primary weapon, the GN Sword V to create the GN Buster Sword for maximum offensive power. 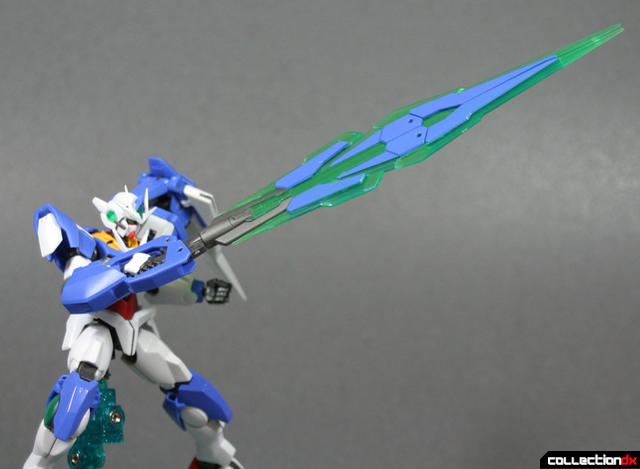 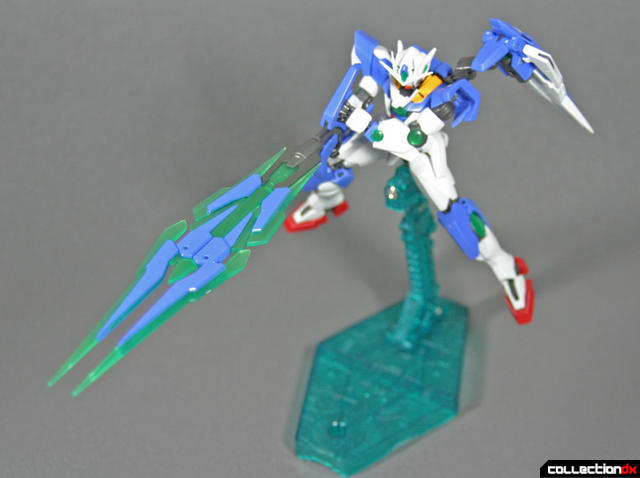 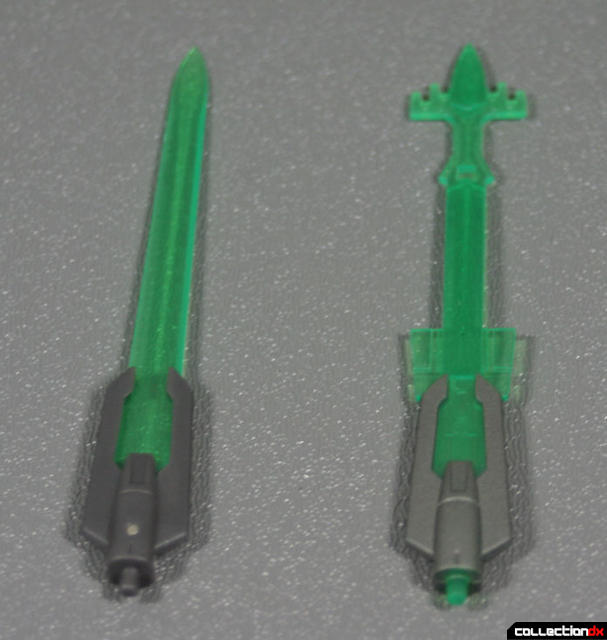 As a swappable part, the blade of the GN Sword is designed with a short length peg to connect with the grip section. Unfortunately the version designed to hold the Bits loses its grip over time. As does the soft material they are made from causes the Sword Bits to sometimes fall off as well. 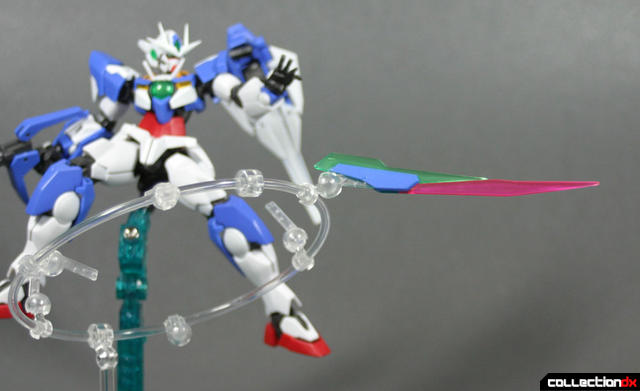 The 00 Quanta’s Bits also come with two clear beam blades that mount with the two medium size bits, a gimmick that was missing in both the film and model kit incarnations. 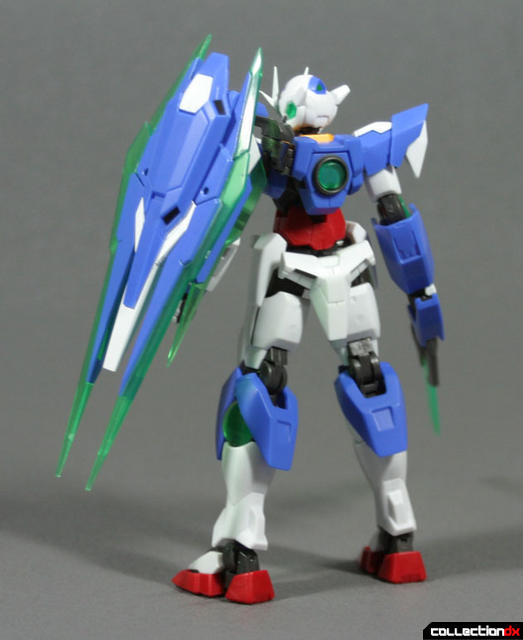 When not in use, the Sword bits dock with the 00 Quanta’s Shield Binder through ports and folding tabs on both the Bits and Binder. 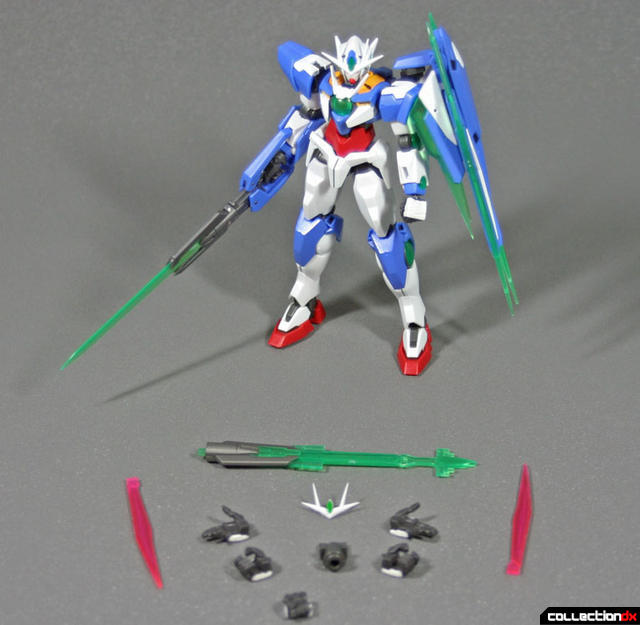 The 00 Quanta comes with multiple hands that are left and right side oriented. This includes one hand designed for holding the GN Sword in its primary blade mode and for two holding it in its buster mode along with the usual splayed palms and closed fists. The left handed weapon hands are somewhat redundant as the 00 Quanta is shown normally holding its only weapon with its right hand. 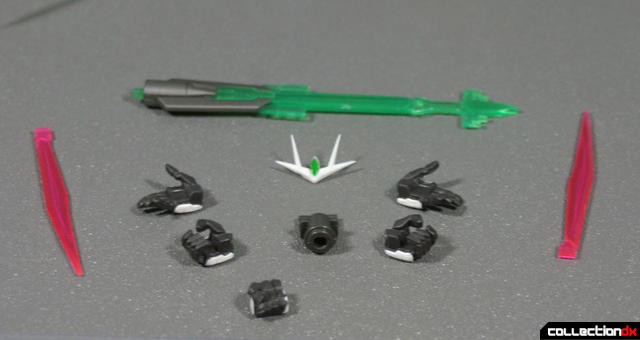 The 00 Quanta also comes packaged with a spare V-crest. Unlike the one that comes attached to the figure, this one is molded in white material and features a painted forehead sensor. 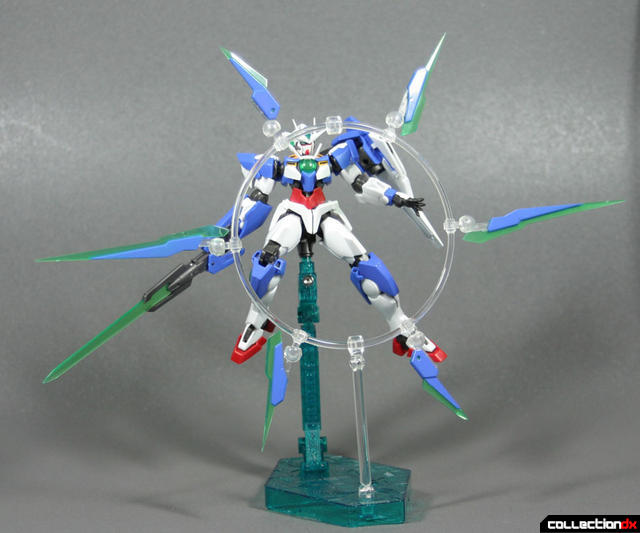 Rounding out the 00 Quanta’s accessories is a display base clip which mounts under its waist and the special display stand ring for its Sword Bits to form a halo in front of the 00 Quanta. Unfortunately both the display stand clip and the halo require a display base which is not included with the Robot Spirits 00 Quanta. Fortunately the ring and display clip can mount on one of Bandai’s model kit Action Bases. 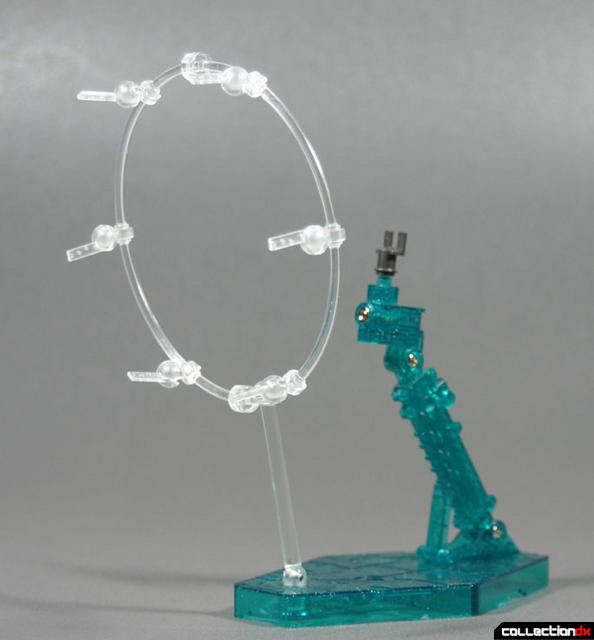 The display ring for the Bits can also be used to display the 00 Quanta in its “Quantum Burst Mode” as seen in the film. 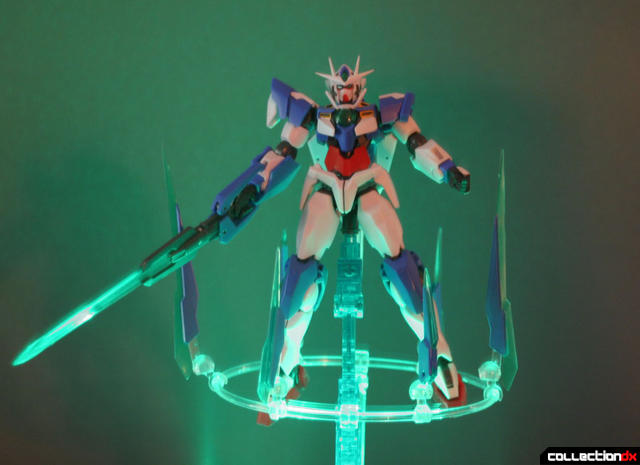 This is one of those rare moments when a Lightning Base is actually worth it!

Although the quality of the 00 Quanta is good, it still carries some of the MSIA flaws. There are a few points where the paint applications come over molding errors. Looking over the figure a few times, they really are negligible, and they can be fixed easily.
In spite of its minor problems, I expected something better than the MSIA and the Robot Spirits 00 Quanta really delivers. 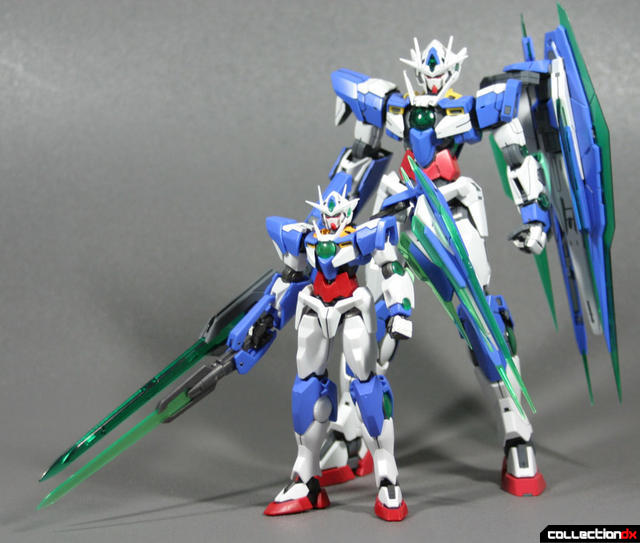 This sample is courtesy of Bluefin, but you can gain yours at BigBadToyStore.com!

I don't see it pictured, but just to clarify, the GN Shield can or cannot be moved around and fitted to the back of the torso?

Just saw this comment post, but yes the GN binder does come up to the back of the torso. It doesn't lock but it holds in place really well.

Okay, thanks for the info.

I've recently gotten a crush on the 00 Qan(T), and while I prefer my toys to be pre-assembled and -painted (durr), I want something around the 1/100 scale (6-8" average) to work with. Unfortunately, the only 1/100 of the 00Q that exists at this time (ever?) is the Master Grade, which is actually too complex for my needs. If I have to build it, I don't want to worry about an inner skeleton and/or lights... unless it's a 12" toy. (Quantum Burst Mode with purging armor? Screw that noise!)
The RD version here is appealing, and I own the RD Buster Gundam for reference, but I fear its size may lead to weak joints (especially in the shield and right arm), and I still have a lingering bad taste of MSiA.