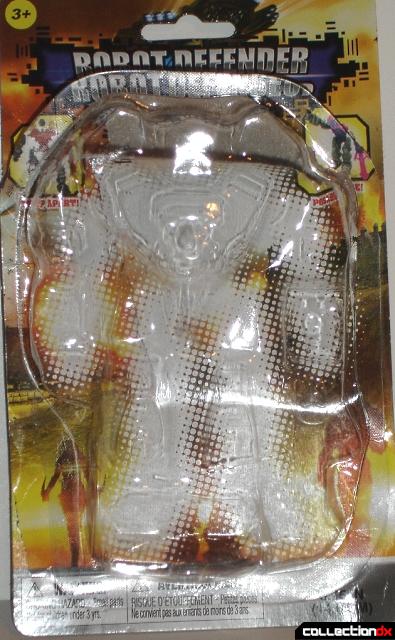 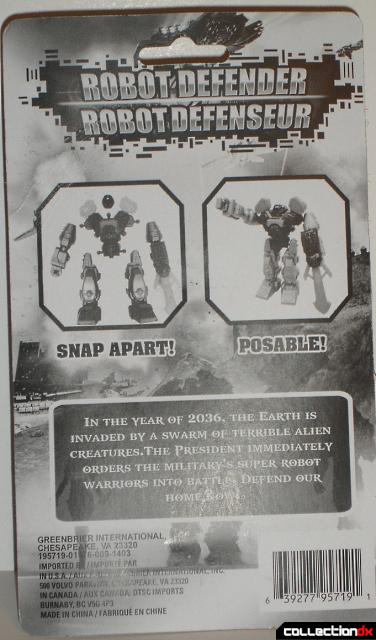 "In the year of 2036, the earth is invaded by a swarm of terrible creatures. The president immediately orders the military's super robot warriors into battle. Defend our home now!" At least that's according to what's on the back of the packaging. One day I was scrolling through a local establishment known as "Dollar Tree" and I stumble upon a multitude of brightly coloured robotic figurines. Looking at what was in front of me I noticed that all of them were exactly the same except for their colours and the two different head designs. Might've been three but I don't remember. I also don't remember seeing any of the so-called "swarm of terrible creatures" that were mentioned on the back of the packaging. What exactly are the Robot Defenders supposed to defend our home from? Since all of the Defenders had the same exact body style there really wasn't much to choose from so going by their colours and head sculpts I scooped up two samples that caught my eye and headed straight to check out. For me this was an impulse buy but for a buck a piece I wasn't losing anything. That and the fact that all of their limbs as well as their heads and weapons were interchangeable. For a short while I thought these were original designs but they are actually over-sized and slightly simplified knock offs of one or two of the M.A.R.S. Heroes robots. I think it was either series two or three. I really wish they came with some of that heavy artillery though, but oh well... 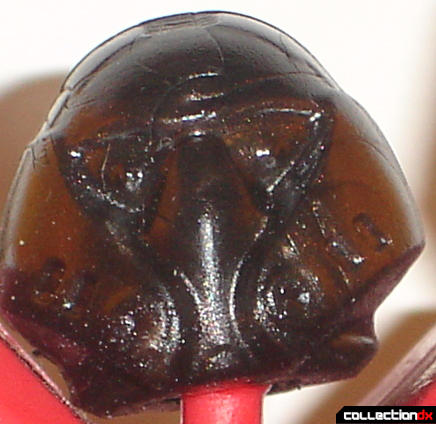 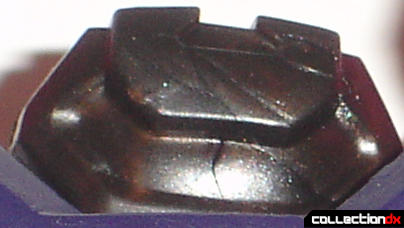 Since the only thing REALLY different about these guys is their head sculpt, I shall refer to them as "Defender 1" and "Defender 2." Defender 1 has a round helmet, a face plate, and two bulgy looking eyes staring back at you. On the bottom sides of his helmet there are circles sculpted in that could act as small vents. This head sculpt is my favorite of the two. Defender 2 has only one huge visor for a face. He does some detail molded on top of his head. If he had 2 antenna and one eye in the middle of his head he would look exactly like Shockwave from Transformers. 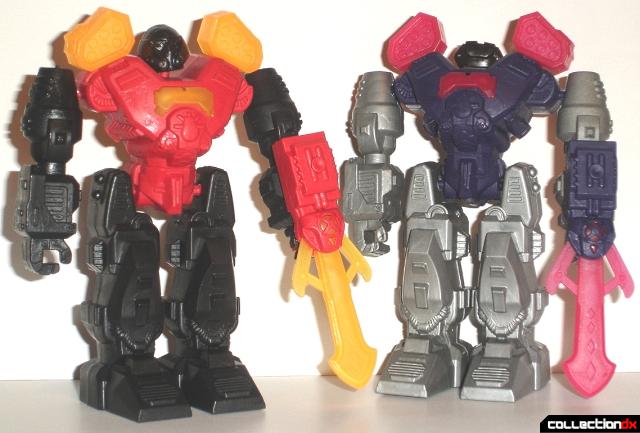 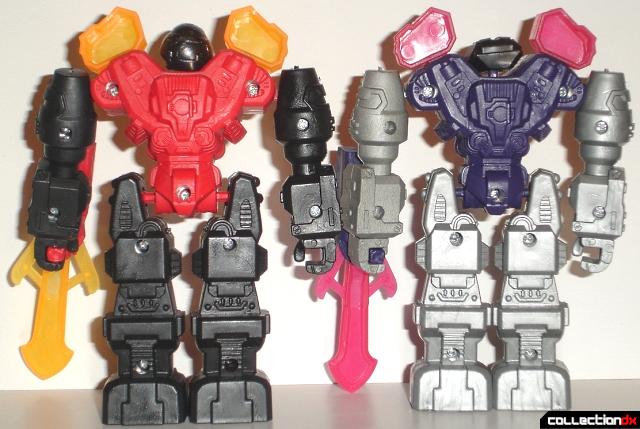 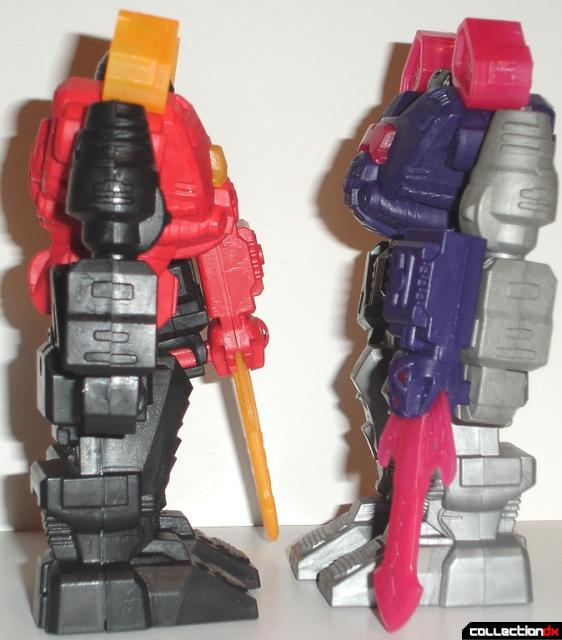 Here they are in their fresh from package "original" forms. They each come with a futuristic crossbow type weapon. Unfortunately the missile pods on their shoulders can't be removed. I loved the black on Defender 1, but I also loved the purple on Defender 2 so guess what I did? 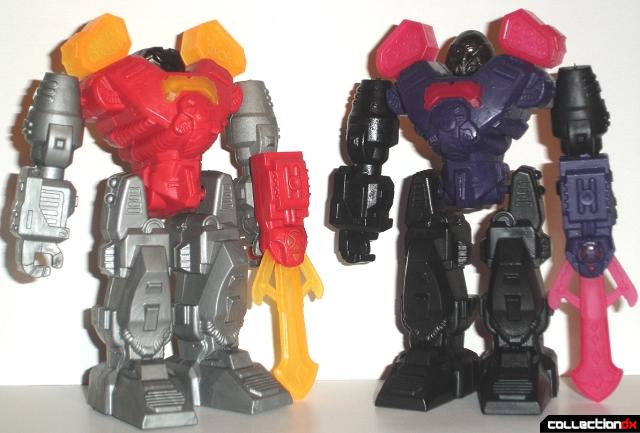 That's right, just a simple swap of limbs (a la "scramble city") and my perfect robot warrior is born! Well, I guess it would be more like "The Headmasters" since I'm identifying them by which head is on which body. Defender 1's new colour scheme is very dark and sinister looking with pink added in to brighten things up a little bit. To me I don't think it looks gaudy at all. Unlike Defender 2's new colours. It's not bad, I just think it's too bright. Either that or because I've never been a fan of red. 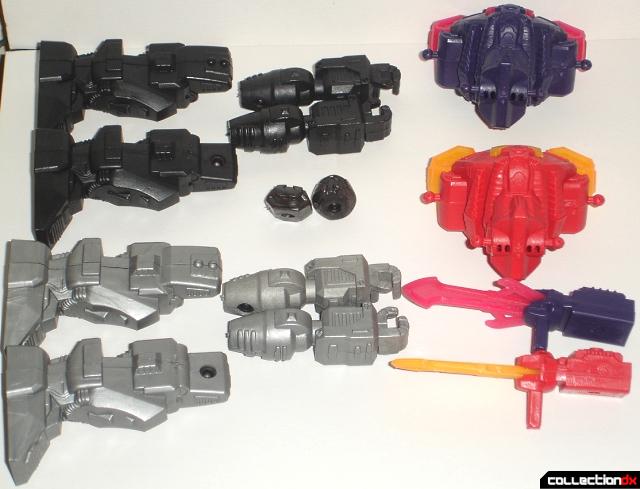 At the risk of sounding redundant, all of the parts are exactly the same except for the two heads. Some assembly required.

Upon closer inspection, the crossbow weapon is actually an energy sword and it looks like it could light up but unfortunately there are no electronics anywhere on these figures so a good old fashioned flashlight will just have to do. 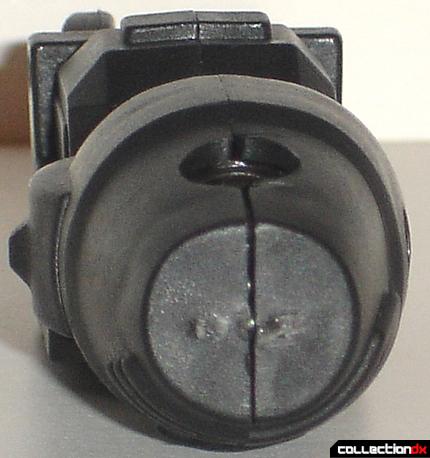 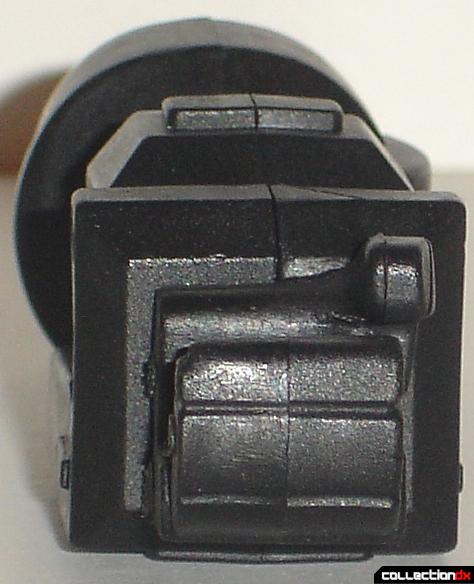 The left and right arms on both figures are the same, but they have incredible detail sculpted on them 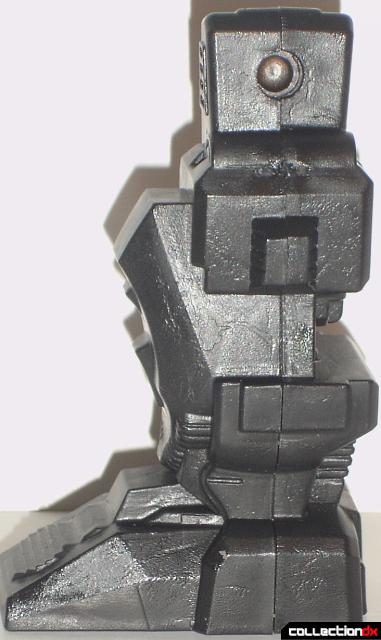 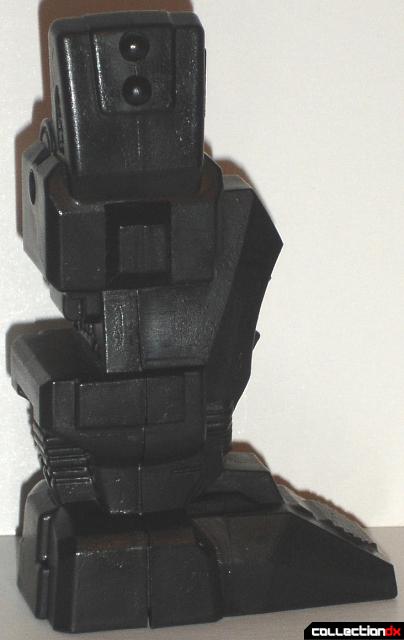 The legs as well. For such cheap and loose figures, they have incredible balance. 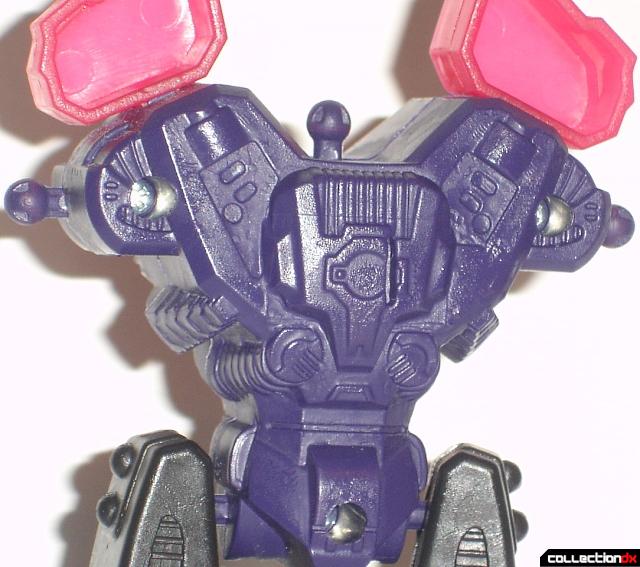 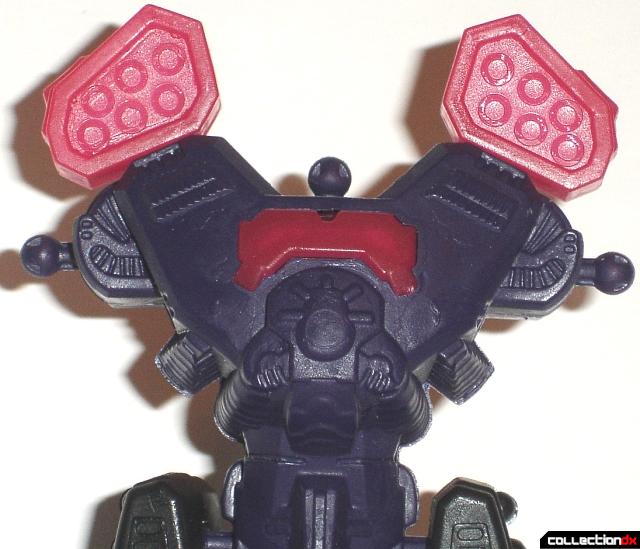 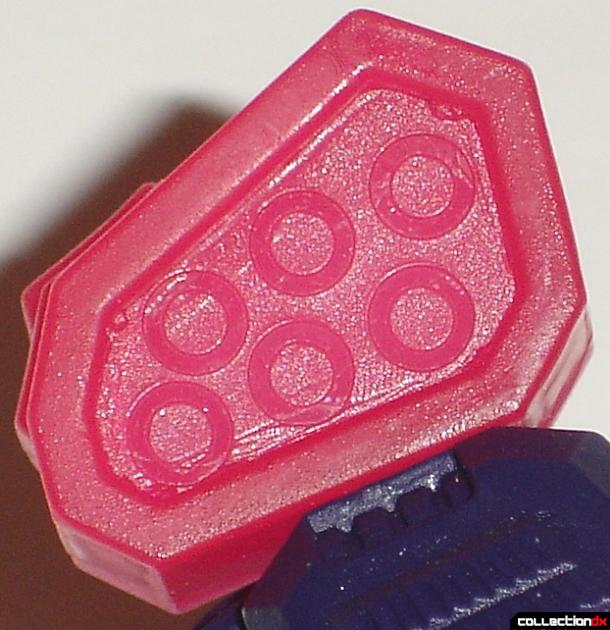 The front of the torso has a colored piece that looks like a pilot (or electronics) could fit inside there. The back has nice details such as hoses and a backpack molded in and the missile pods have details molded in the front but are completely hollow in the back. 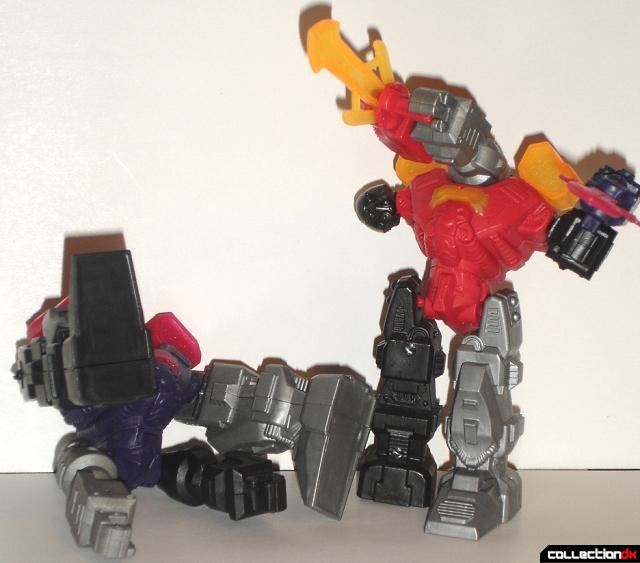 Here is the result of trying to put them both together in the dark. Not such a pretty sight, eh?

If you have an extra dollar to spend and you want something obscure, yet vibrant and colourful sitting on your shelf next to your other generic action figures grab one if you see it. You'll have a cool little knick knack to fiddle around with plus your pockets won't be crying!

If anyone is interested, between November and up to now I have seen larger versions of these figures in different color schemes with a light up gimmick. If there is either a Rose's or a Maxway in your area, feel free to go investigate :-)