M.A.S.K. was Kenner’s shameless attempt to exploit the popularity of both the Transformers and G.I. Joe. The story pitted a diverse team of quasi-militant do-gooders (the titular Mobile Armored Strike Kommand) against a shadowy organization of evil snake enthusiasts (V.E.N.O.M., or Vicious Evil Network of Mayhem). Though clearly opposed to one another’s goals, both teams shared a predilection for groan-inducing acronyms, elaborate helmets (or MASKS- get it?) and seemingly normal vehicles (including a red semi-truck) with the ability to transform into battle machines. The less said about the cartoon the better. It was okay.

The toys were sweet. My impression is that Kenner always did better with vehicles than figures. Its Star Wars ships and playsets were always beautifully done, but the figures were uninspired. So M.A.S.K. really played to Kenner’s strengths. The boxes were top-notch, with striking paintings and tons of photographs and feature shots. 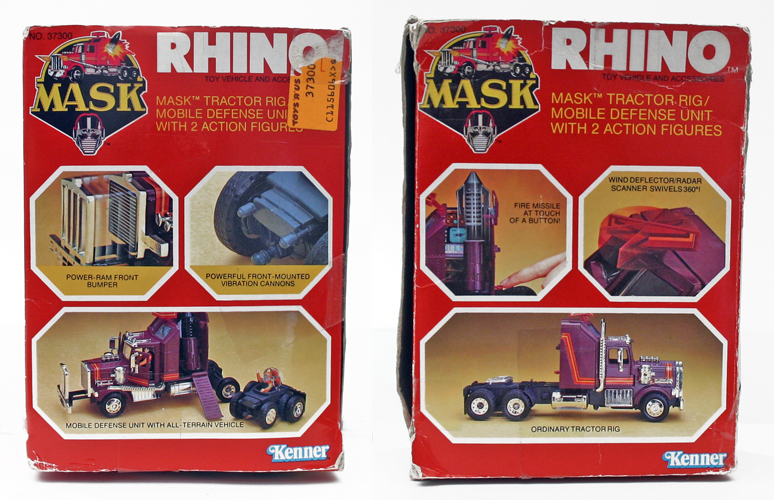 Rhino was the largest and coolest of the first wave of M.A.S.K. toys. I dearly coveted this piece as a child. In its default configuration, Rhino is a healthy fourteen inches long; it’s a solid beast of a toy. 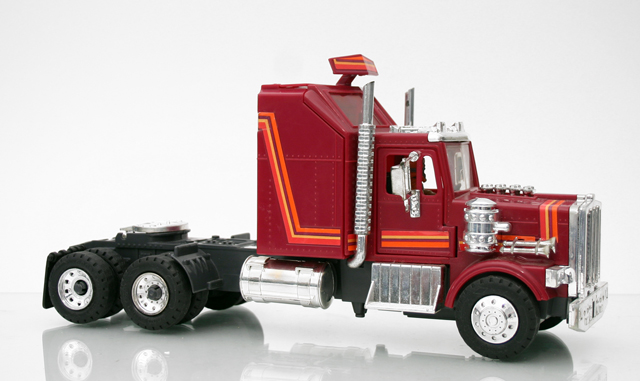 Lavish chrome details abound. All of the plastic is sharply molded. The tires are heavy rubber, and pristine even after twenty-five years. Rhino would be a success if it were just a toy truck, but it is so much more. 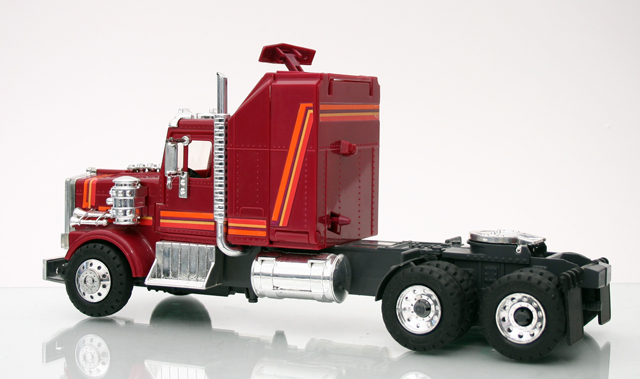 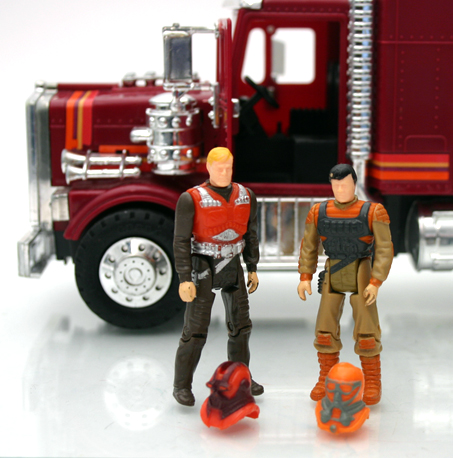 The set comes with two figures. They are smallish, only barely articulated, and come with unique soft rubber helmets. 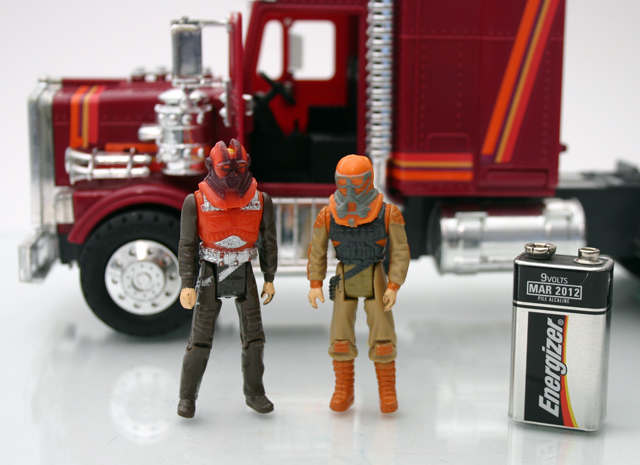 They are fine, but they are totally beside the point. The point of this toy is cool action features. Two features are actuated by discreet chrome button at the rear of the cab.

The left button releases the spring-loaded grille and bumper as a kind of battering ram. 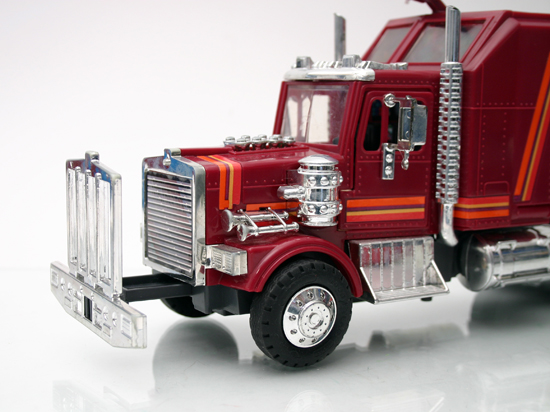 The right button activates the spring-loaded ejector seat at the passenger side, flinging a figure out the door. It’s pretty cool, and remarkably effective. 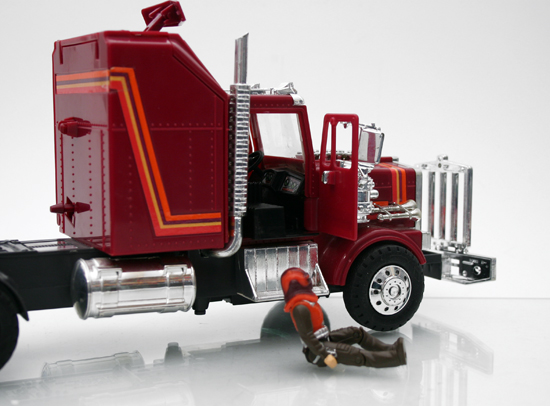 The smokestacks can be turned horizontal to become cannons. 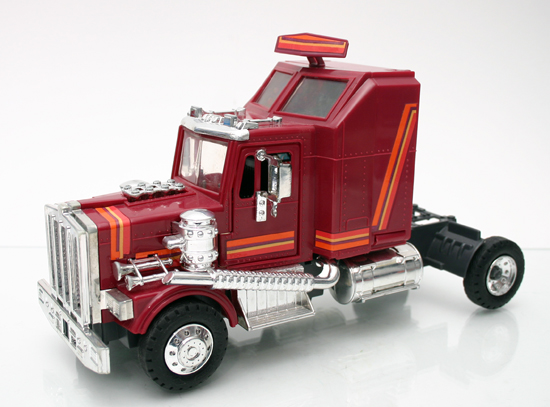 A rear section of the truck snaps out to become a separate vehicle, complete with a rocking suspension and cockpit. 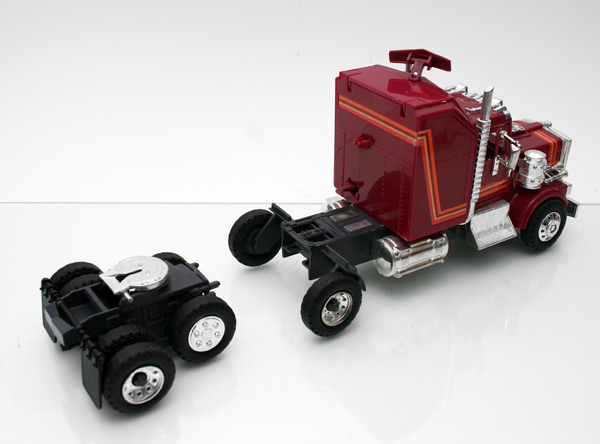 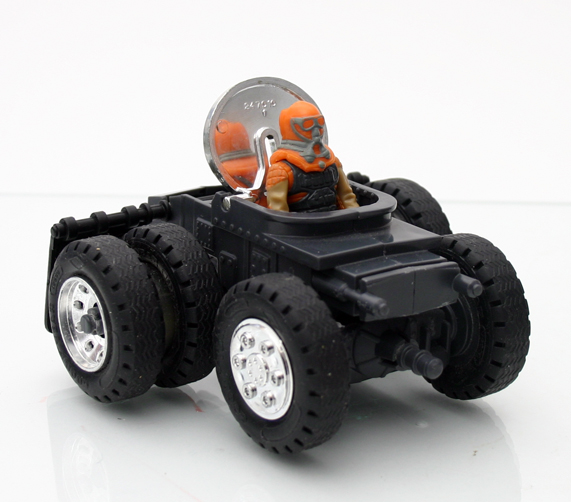 The sleeper section of the cab slides towards the rear to reveal a rocket launcher and control room. You can shoot the rocket high into the air with a lever on the back of the cab. The control room has some nice details. 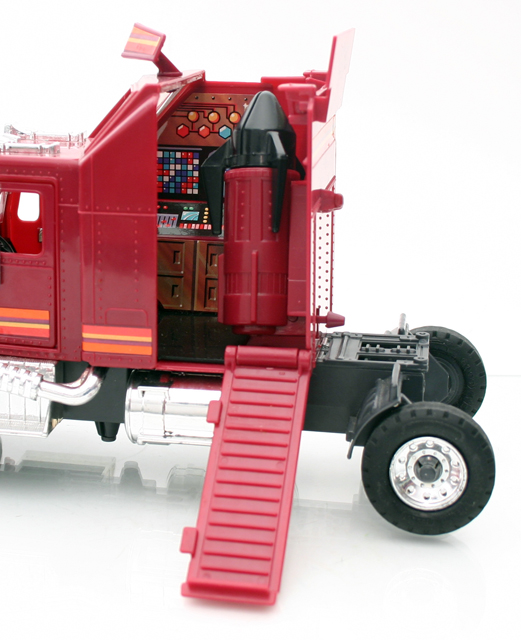 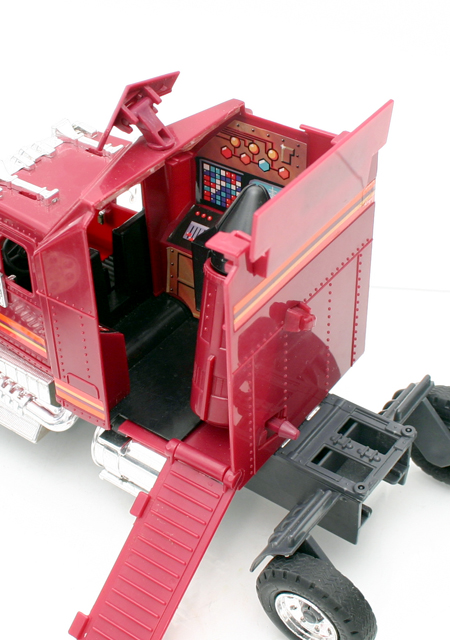 Rhino is a marvel of engineering and quality, with miles of play value. 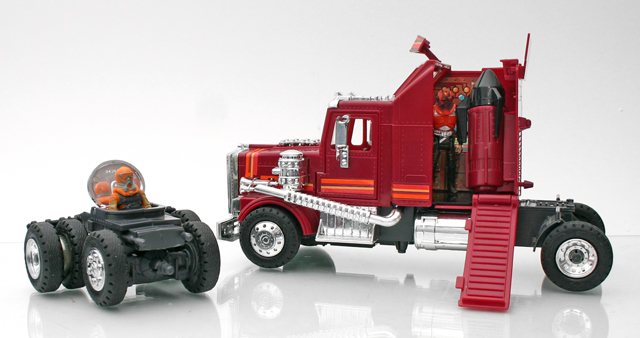 The concept may be hackneyed, but the M.A.S.K. line produced some of the finest American toys ever. "But Enthusiast," you say. "Where are the robots? All I see are two guys in helmets--er, I mean, MASKS." Fine. I give you young Scott Trakker and T-Bob! 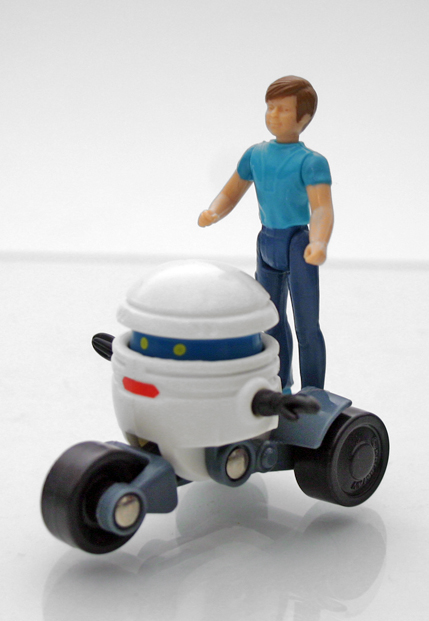 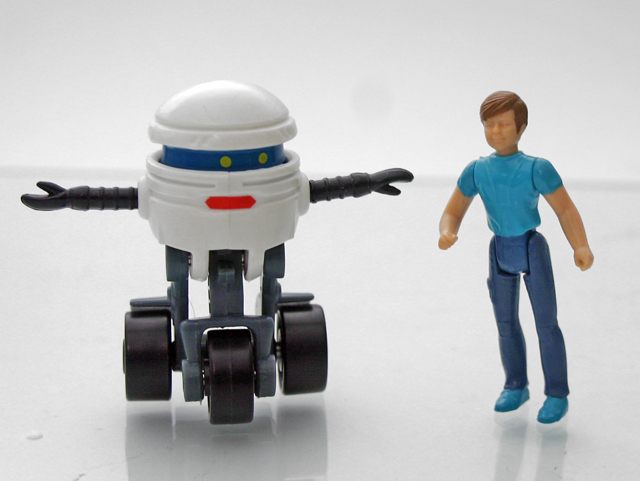 17 comments posted
Yup I dig that!

I was fond of these when I was a kid. My cousin had most of the run, so I played with his. Unfortunately the only one that I ever acquired is the Condor. It is the green motorcycle that transforms into the helicopter. Cool as hell. I fondly remember the cartoon series as well. Nice review. Excellent pictures. I dig your enthusiasm. Oh man I wish I had more money.

Nice review. I also really wanted one of these as a kid. Must be the allure of a transforming truck.

Very nice review. Rhino was one toy I always wanted to grab as a child. Along with Transformers, M.A.S.K. was definitely right up there among my favorite toylines. I recently got my hands on some of these toys and am planning on restoring them. Finding those figures WITH their masks is very hard :-/

I had this as a kid, and honestly I didn't like it that much. I know this sounds silly coming from someone who was 10 at the time, but Rhino always felt sort of directionless. It was a truck that, um, did stuff, but it was still just a truck. Compared with a helicopter that turns into a jet (my favorite), or a motorcycle that becomes a helicopter, or a sports car that becomes a, uh, flying speedboat thing (?), Rhino just didn't seem as cool to me.

Yeah, it was big, well-built, and had a lot of features. Maybe I'd like it better if I saw it in person today. But as a kid, I didn't like it as much as some of the other MASK vehicles that I and my friends had.

Oh, and one halloween I made an absolutely terrible carboard helmet to go as that "Stiletto" bad guy. I remember using those clear red plastic strips that Transformers came with for the eye pieces. I'm not sure if this feeling is nostalgia or shame...

Nice on that costume. Stiletto was pretty cool.

I see your point. Rhino isn't as focused as the others. It is kind of a grab bag of features. Even the other semi, Outlaw, was a missile launcher and nothing else. There's just something alluring about the biggest toy in the line. I also really like Volcano, even though it kind of sucks. But damn it's big.

Rhino was the mobile "Kommand" center, it didn't need to turn into a plane or something, it was a truck with defenses on it that served as the base while they were out in the field. I always wondered why they didn't come up with a trailer for it to carry other vehicles or to serve as some sort of barracks. I had planned long ago to try and make one for it, but ideas are easy to come up with and harder to follow through.

The one I think you might like is the Bulldog, it basically just turned into a tank, and was arguably the last good idea they had in that line. I've got just about the entire line outside of the ones that sucked (all of the last wave). It was a great line that was super hot for a few years then crashed and burned due to some horrible designs near the end.

Aramaki did work on the initial designs, but I think Artmic was only there for the first crop of vehicles, since you can see a dramatic shift of style in the later designs. Although some of the designs used later in the line were from early on, since several toys of key vehicles from the first season didn't show up for years. The Manta - one of the best in the line - didn't get a toy until the third year, even though it was consistently in the show from the very beginning. This was maddening to a kid who was unsure of what was in the stores, leading to schoolyard bulls*it about having the Manta or Shark - even though one was years away and the other a sad omission from the line.

I was around 15/16 when these came out, I could remember walking into a Kiddie City and looking at these and going NAH( felt the same way about Transformers), and then going to collect the cooler line of G.I. Joe. Now I have almost the whole collection found a person who did not know what he was giving up and got them dirt cheap (even Boulder Hill Playset), I have no boxes and the pieces are not mint, but the man did love his M.A.S.K toys, now I'm loving them.

Awesome review of an awesome toy. More vehicles please. Although I'm obsessed with anime, I loved this show too. Thanks for sharing.

One of my all time faves.
I have just recently collected about 85% of the toyline and all of the tv episodes. . .
The only toys I don't have are either very hard to find or vehicles I didn't like.
But considering the difficulty of getting the rest in good to excellent condition it still may take some time.
I like them all but Rhino, Bulldog, Switchblade, Jackhammer, Firecracker, Wildcat, and Goliath were always at the top of my list. . .

The quest for supremacy shall never end. . . .

Well, that does have rhino in it.

Exactly. Kommand is a little too soviet for my tastes. I would call it the Mobile Armored Strike Klatch. As for VENOM, I don't think the word "of" is supposed to contribute to your acronym.

This was the year I diverged from my normal GI Joe purchases and bought MASK toys. This was an excellent line of toys and I had Rhino. I thought it was cool that it came with the two figures and having come out during the Mad Max Road Warrior era it was the king of the road. I didn't have many mask toys I don't remember what ever happen to this toy where most things I can account for.

MASK in my book isn't shameless but inspired. I just wish we had more time and more money as I could have seen myself collecting MASK as it was just so cool!

I do recall the Matt Trakker figure co-piloting Rhino with Bruce Saito, but what happened to that beared bald guy figure who piloted it? I think he's called Alex Sector.

Oh... Okay, thanks. Sector did came w/ Boulder Hill I remember now thanks to you, but I could've sworn that he drove the Rhino battle truck in the show. Trakker regularly drove the Thunderhawk jet-car in the show too.

Love this series of toys! My brother was more into these than I was, but I sure did like the Airplane/Helicopter. If I recall, there was a comic book series, too. Let's see more MASK stuff!