Star Wars and Lego were my two favorite things growing up, and I still remember how amazing it was that Lego got the Star Wars license.  Leading up to the release of The Phantom Menace, I saved up for months so my Mom could take me to Toysrus the day after Christmas 1998 to buy almost every set released. 16 years later, a new Trilogy is about to start, and along with it a whole new line of Lego sets. The dollar doesn’t get you as much as it used to and I have more financial responsibilities now, but my excitement for the new movie meant I still had to buy a Lego set for Force Friday. 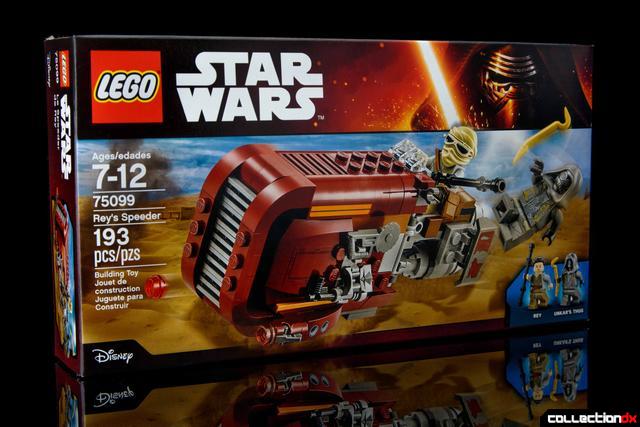 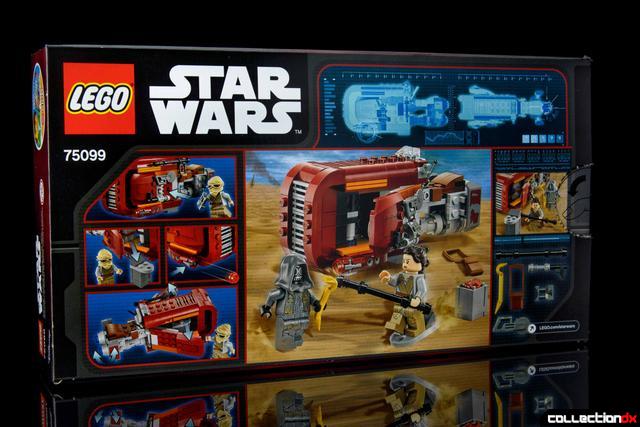 Disney has been pretty tightlipped about the movie, so there isn’t much info about Rey’s speeder. In fact, we don’t even know her last name. All I know is that Rey rides this not-Fudgesicle speeder bike on the desert planet Jakku. Coming in at 193 pieces, Rey’s Speeder is the cheapest set in the first wave of The Force Awakens Lego sets. I’m not sure when they started using these weirdly long rectangular boxes, but I think it might have been with Ezra’s Speeder Bike earlier this year. 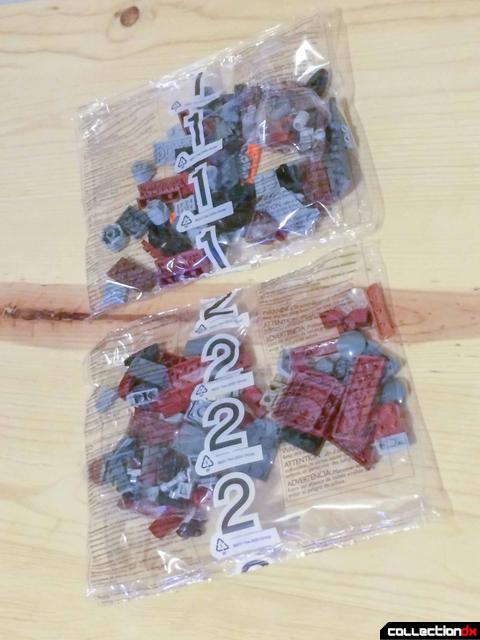 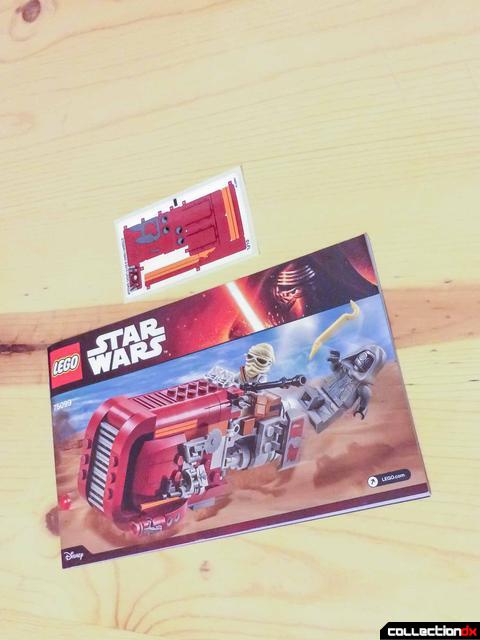 Inside are instructions, a sticker sheet and two numbered bags. 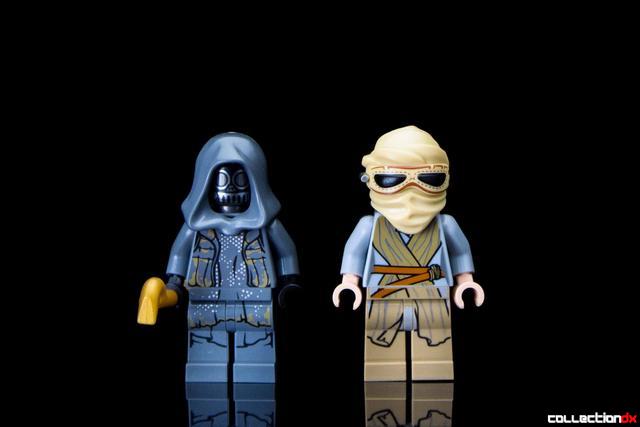 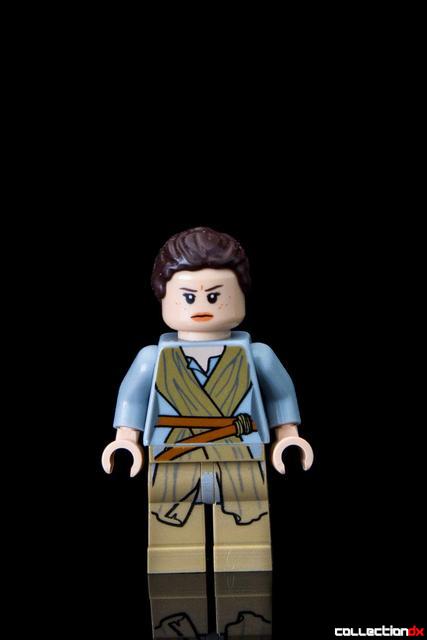 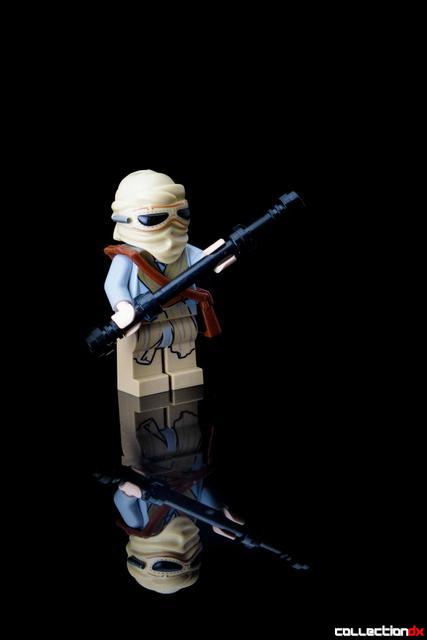 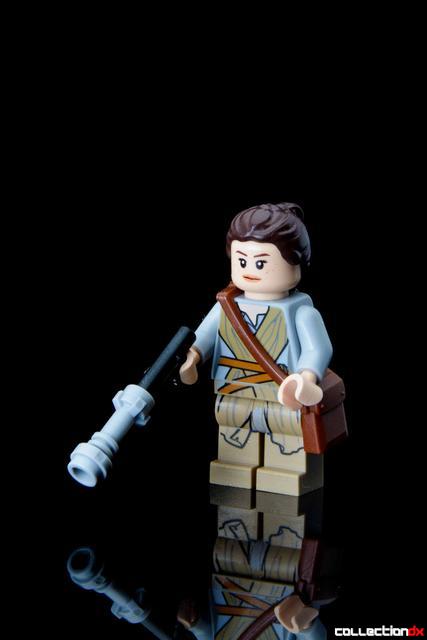 Two figures are included in the set, Rey and Unkar’s thug. Rey head comes with two expressions as well as a separate ‘helmet’ featuring her scarf and Stormtrooper helmet goggles. 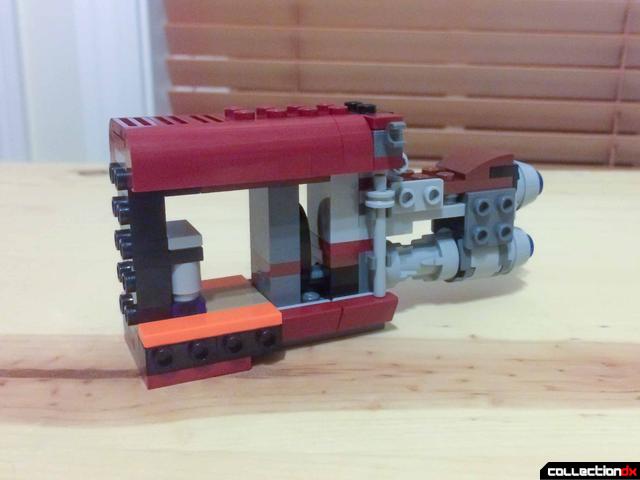 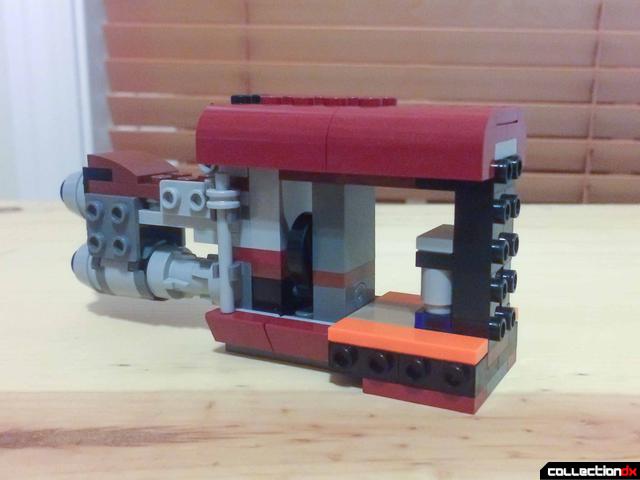 Bag 1 builds most of the Speeder Bike frame. I couldn’t be bothered to interrupt my building time to take better images, so phone pictures will suffice. 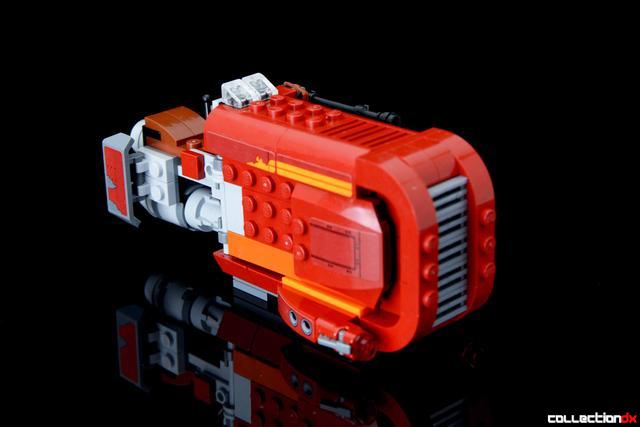 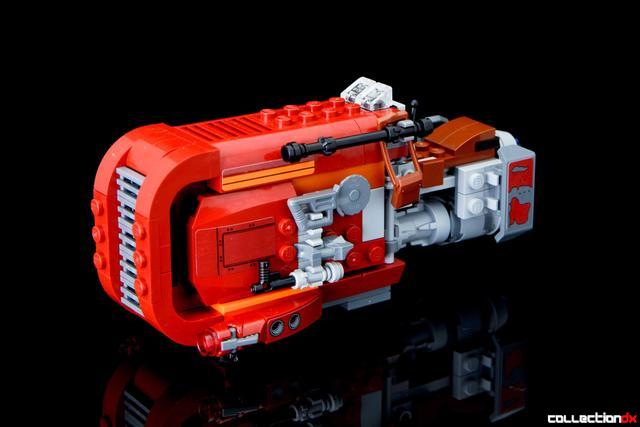 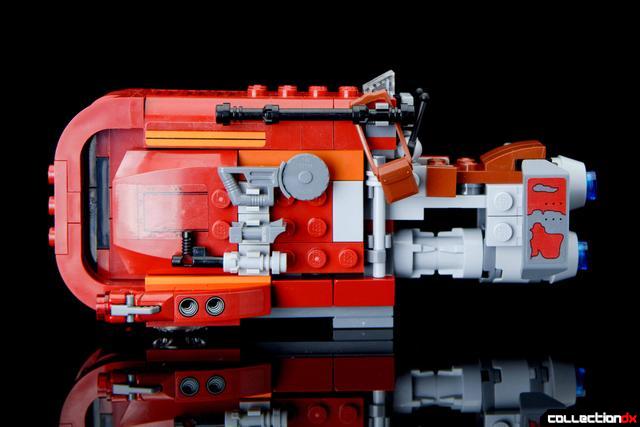 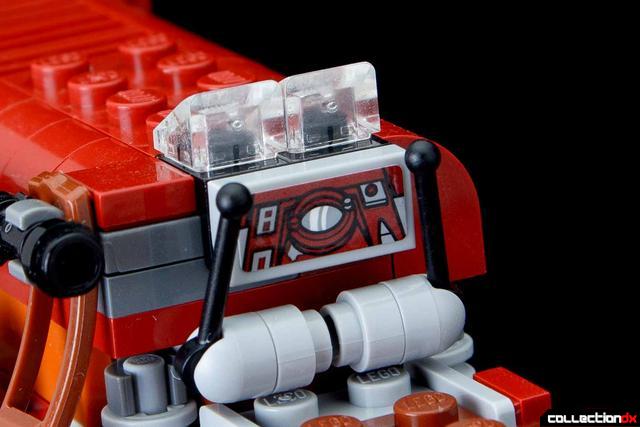 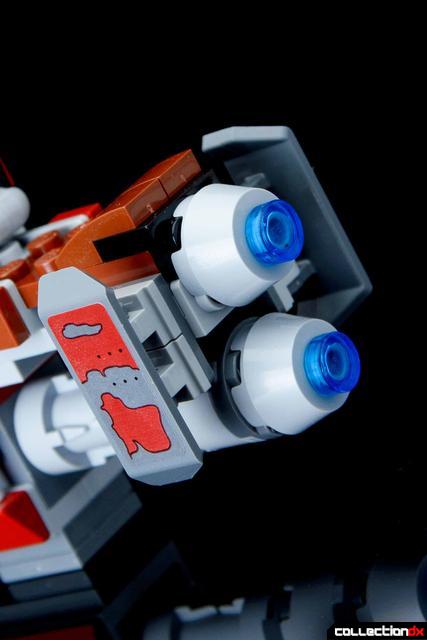 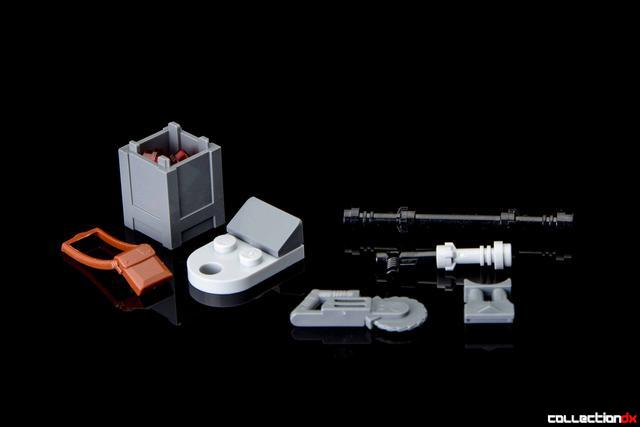 Completed, Rey’s Speeder looks pretty great, with SNOT techniques used to keep the shape smooth and a little bit of greebling. Often times I won’t apply the stickers, but I think add enough to the set to actually apply them, annoying as they may be. Lego has been known to skip out on control panels occasionally, so it’s nice to see the Speeder Bike actually have some. The staff and shoulder bag attach to the Speeder similar to production photos but instead of a net holding scavenged items, a pair of binoculars, saw and blaster are attached to the side instead. 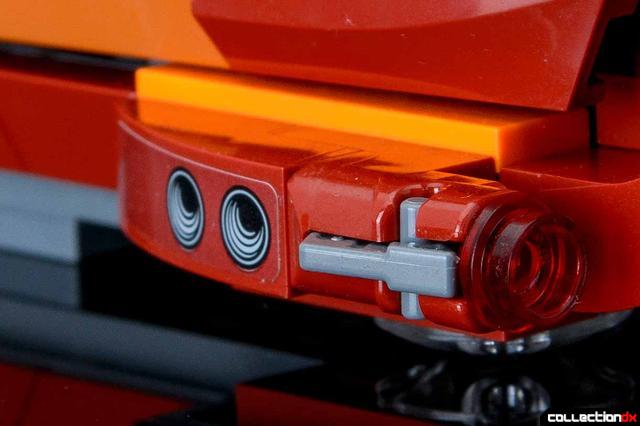 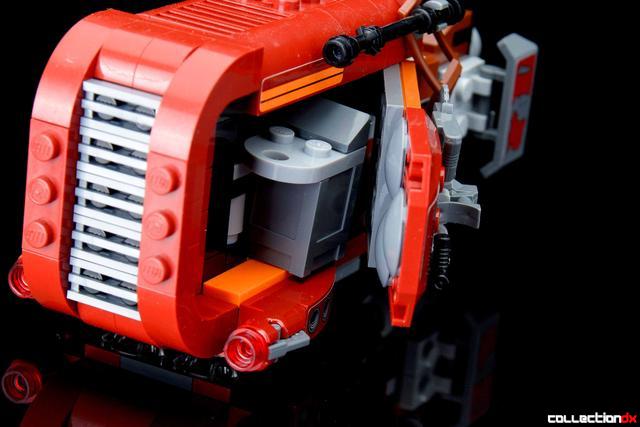 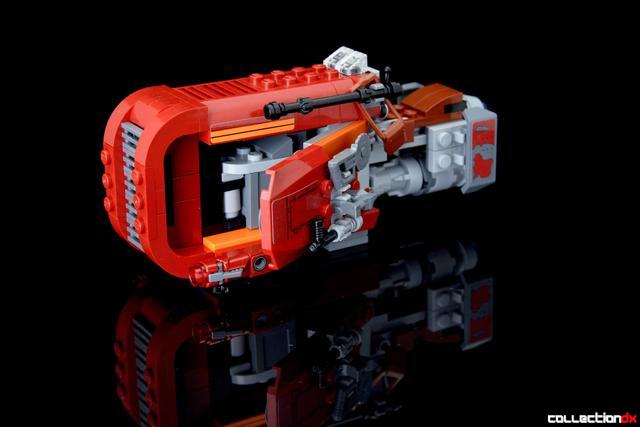 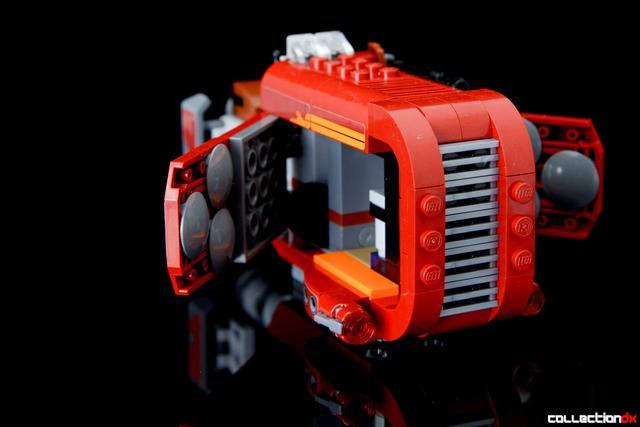 As a children’s toy, the Rey’s Speeder has two gimmicks. There are two of the newer stud shooters on either side of the Speeder. They don’t look as ugly as flick fire missiles and actually fire studs a fair distance, but you also can’t just simply remove them as you could with the old ones. Turning the bottom thruster also pops the side hatches open to access a storage container. It’s not big enough to hold the alternate hair piece or scarf, but you could stuff some extra stud ‘lasers’ inside. 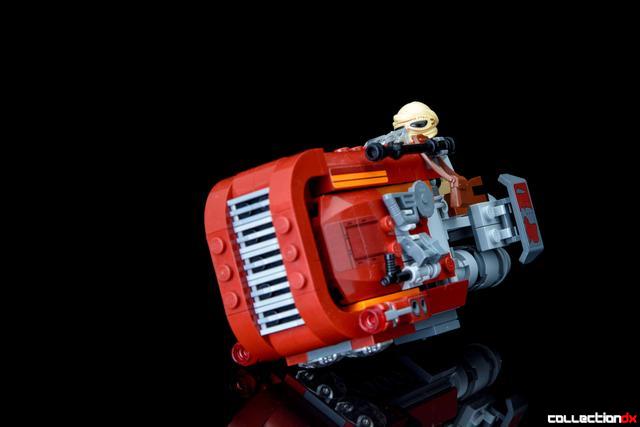 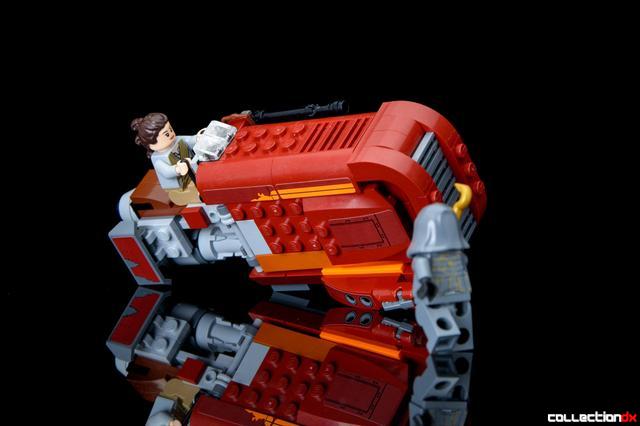 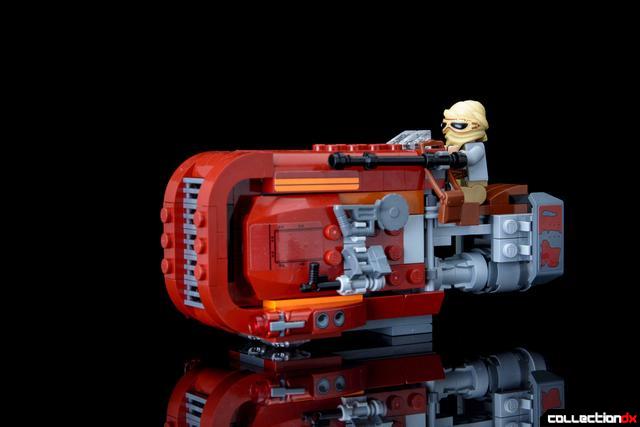 Overall, Rey’s Speeder is a fun little set that looks pretty accurate. It is a little small, but is still close to the magical 10 cents/piece ratio. Lego has never been cheap, but there will always be complaints of how sets seem more expensive than they used to be. The original 1999 Snowspeeder was only 20 dollars as well, but the build was also much simpler. This isn’t always the case, but for the most part, modern sets have higher piece counts and more complex builds; resulting in them being perceived to be more expensive. My only real issue is with the price distribution of the first wave of TFA sets. With only a single 20 dollar set and the next lowest being 40, there aren’t a lot of cheaper sets for children to get into. It creates a bit of a price barrier for the first wave, when the three most iconic ships are 70, 80 and 150 dollars. I would have liked it if they at least included a Stormtrooper battle pack or another 20 dollar set in the first wave, but none of that takes away from Rey’s Speeder itself. I’m still excited for the movie, and will probably end up picking most of the Lego sets as well.

I appreciate the discussion of set economics and price-point criticism.