Perceptor in robot mode looks very good. A lot of the design and proportions are reminiscent of his IDW Comics appearance, which is perfectly alright with me. He's very lithe and frail looking, with loads of tiny details and homages to the G1 toy like the shoulder molding and kneecaps. He even has chrome on his knobs, chest, and microscope like the original toy. 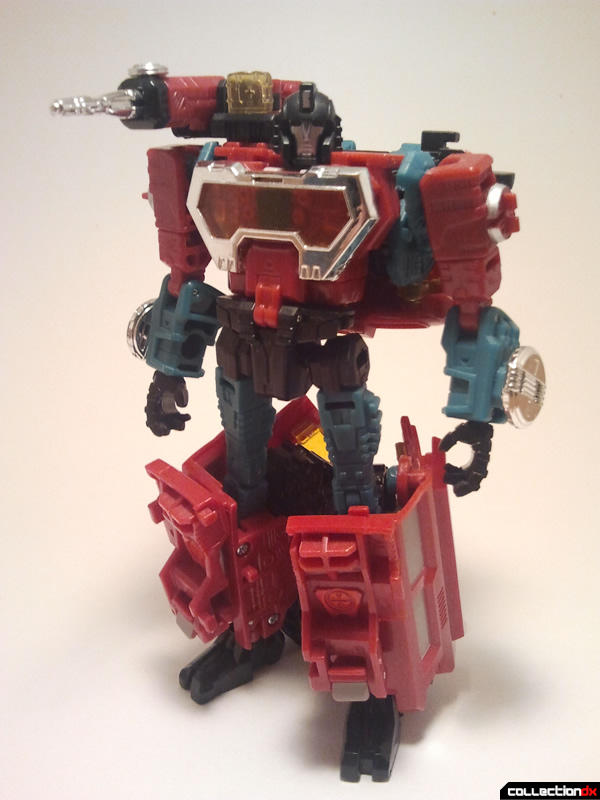 He has a bit of a backpack, but as a scientist I think he's allowed to have one. 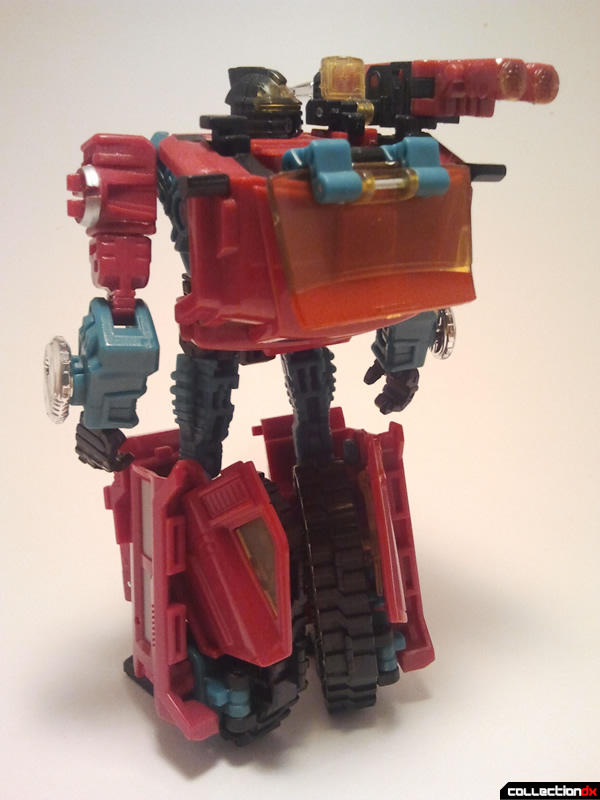 The face sculpt is very nice, with an extremely long and stoic face. It doesn't turn very much though, unfortunately. 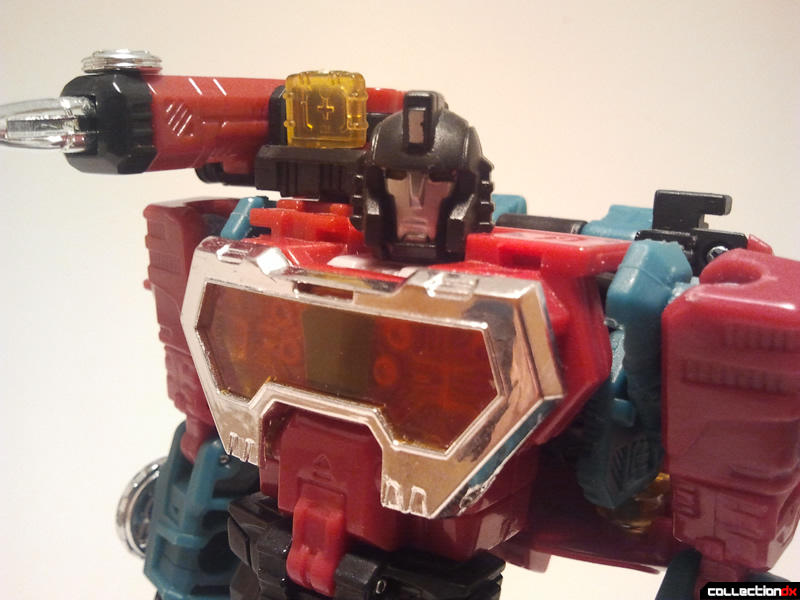 Perceptor is a part of the Reveal The Shield line, and features a rub sign located inside of his opening chest panel. Even the details inside of the chest are similar to the original toy. 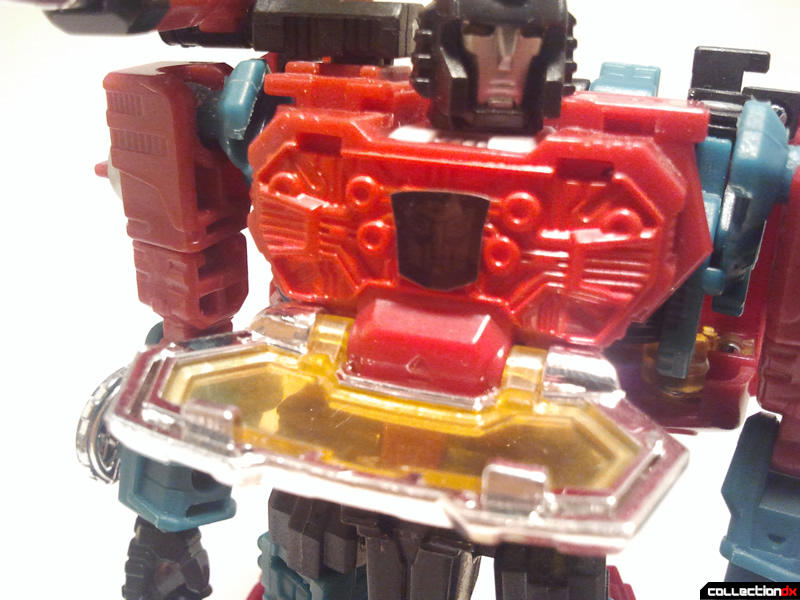 Perceptor doesn't come with any weapons, but despite that he's very expressive and great for posing. He's great at doing thinking poses... 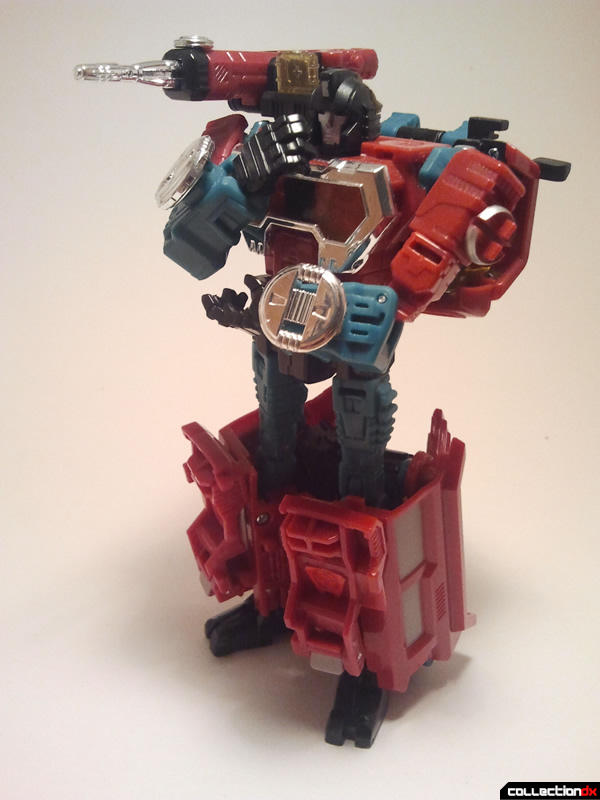 ...Looking down at something in confusion... 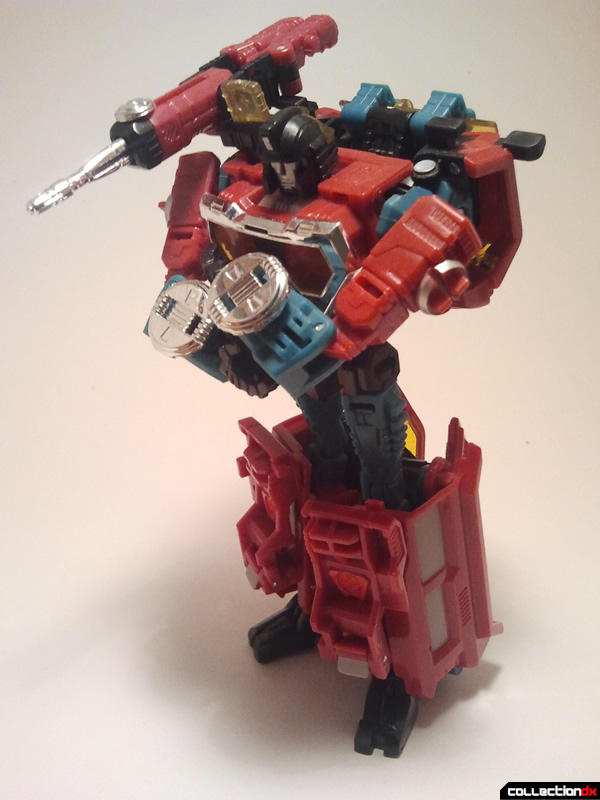 ...Or even just taking a stroll through the park while contemplating science. 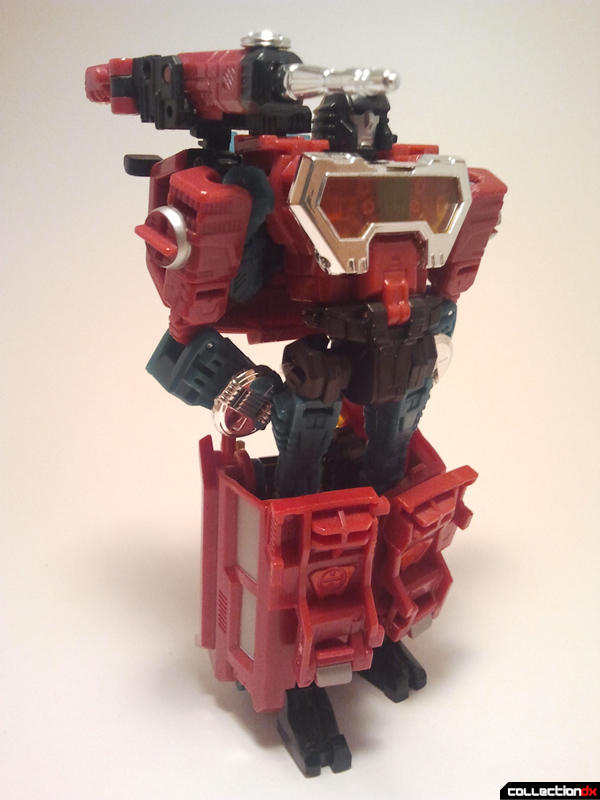 Plus if you really need some weapons, the G1 Perceptor guns look right at home in his hands. 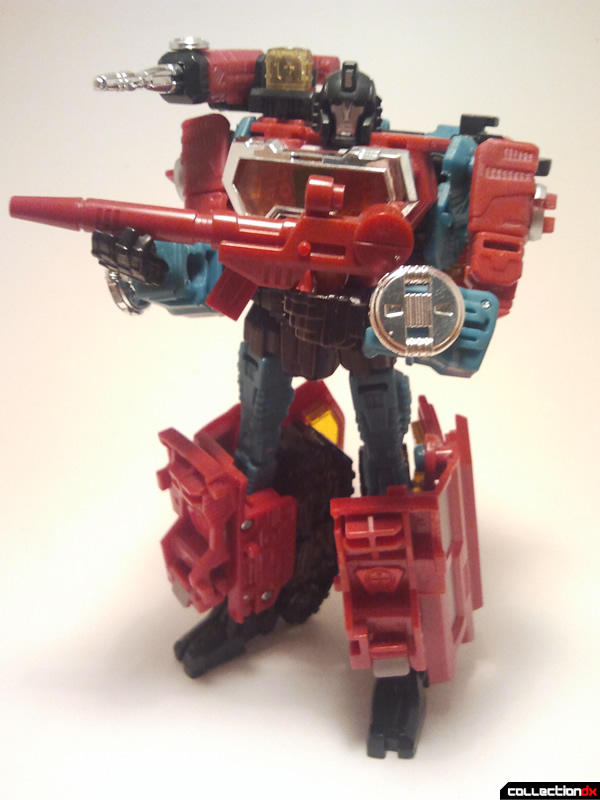 The transformation on Perceptor is very intense. Lots of panel folding and parts clipping into other parts. I'm all for intricate transformations and was excited that one of my favorite characters featured a more involved transformation. However, there is a major design flaw in this toy. When going from vehicle to robot mode, there is a tiny little clip that fits into a black slot in order to connect the backpack and arms to the body. This is not my first Perceptor, as it is very easy to break that clip if you are not careful. 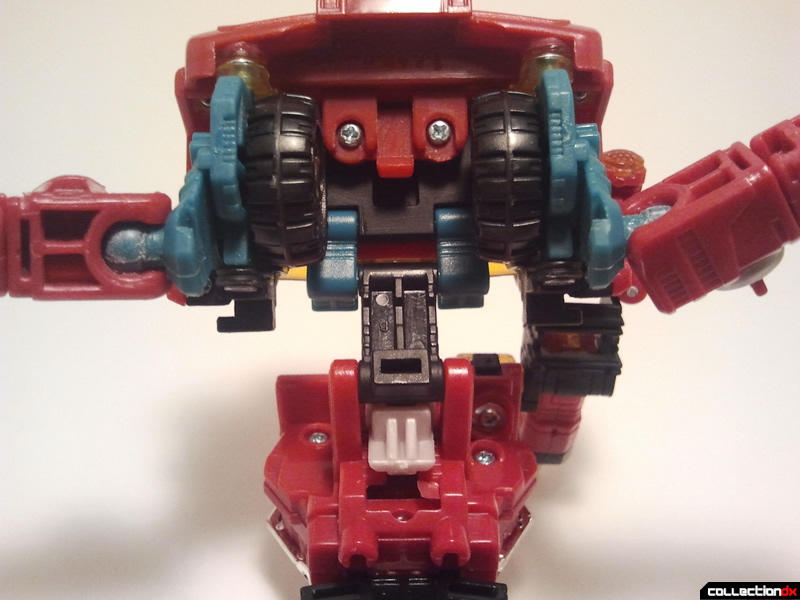 Although it takes a while to get everything fit and flush, the end result is a pretty nice vehicle mode. It's a half-track vehicle, and looks very sciency and suited for Perceptor. Sure it's not a microscope, but I think it's a suitable substitute. 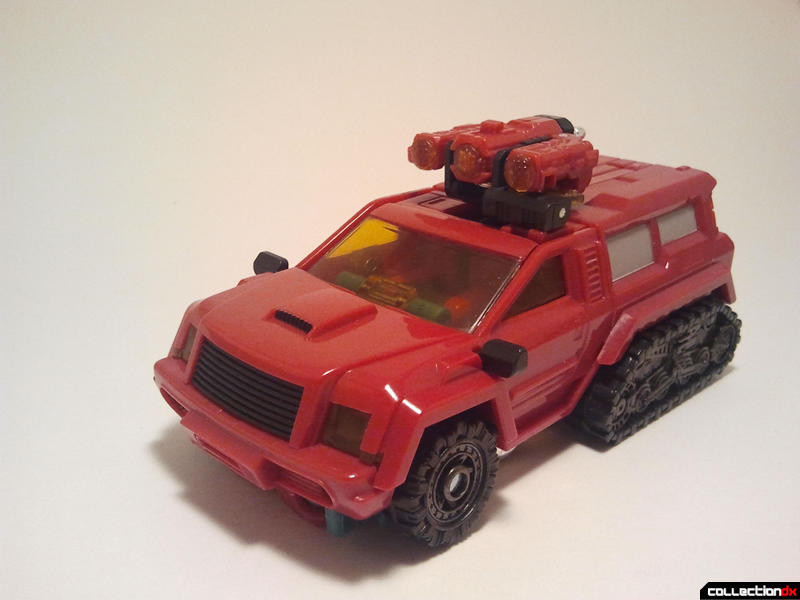 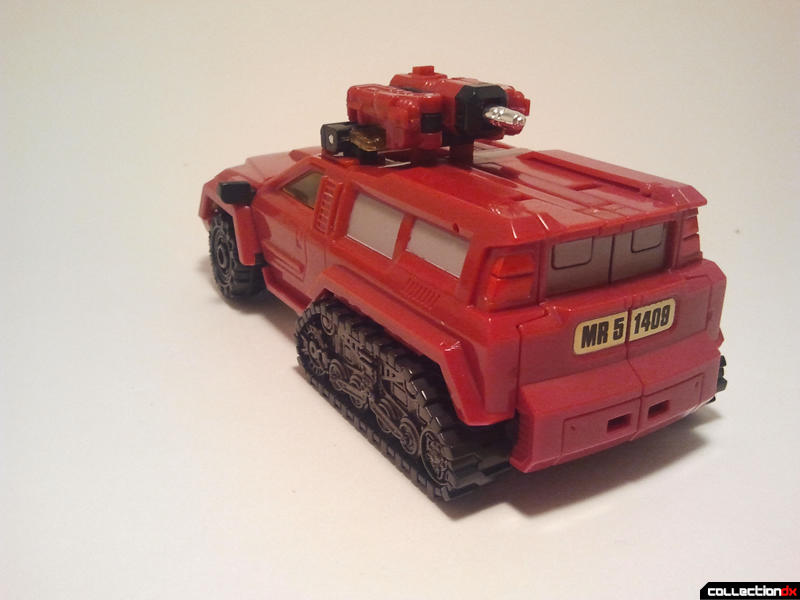 The detail on the rear treads in particular are very nice. 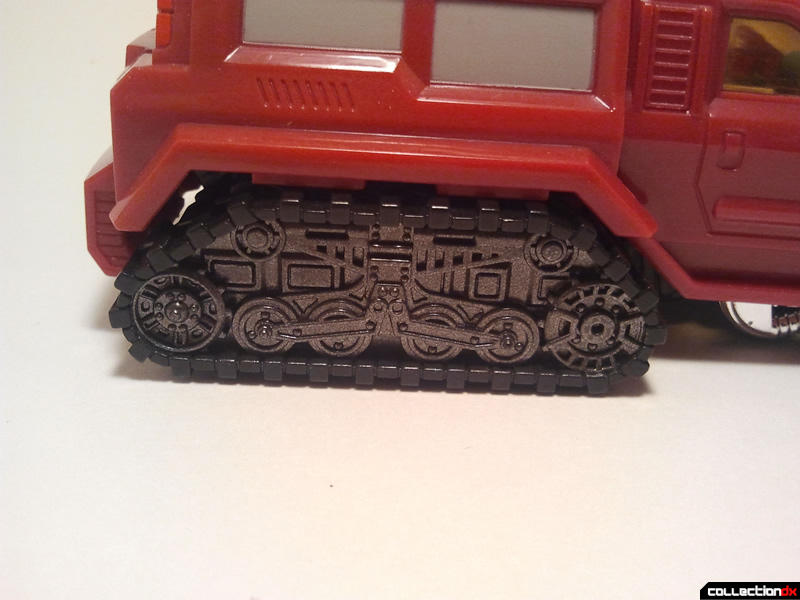 Perceptor is not a perfect toy by any means. His articulation is hindered due to bulky legs and limited ankles, plus he doesn't come with any accessories, and on top of that is also a fiddly and fragile robot. Yet, I'm able to look over all of that because of my love for this character. It's unfortunately not the sort of Transformer that I think kids could do very easily, which is a real shame and makes this one of the weaker releases of this year of fantastic Transformers. Although, just because he is one of the weaker Transformers does not mean he is bad by any means, just not quite as good.

Plus, my trio of Autobot scientists are now complete, and I can overlook just about anything for that reason. 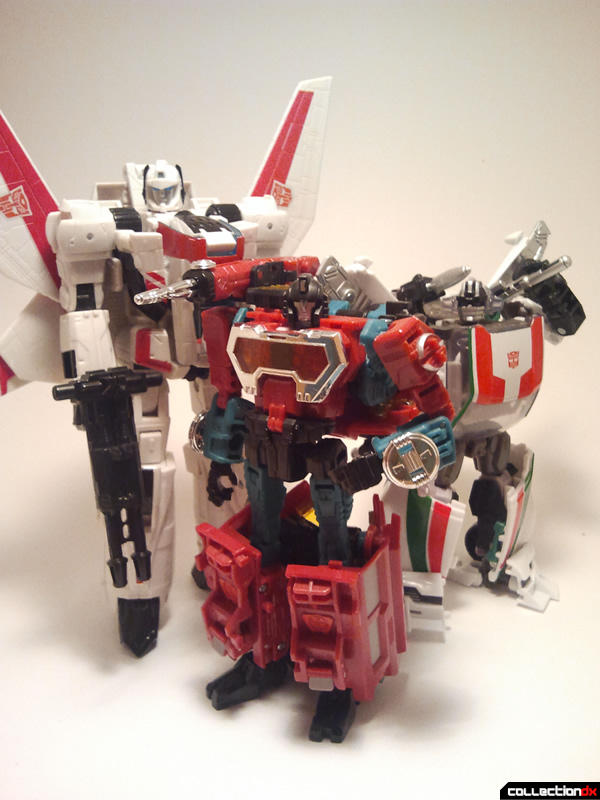 5 comments posted
Wait- what happened to

Wait- what happened to Microscope Mode??? I thought this version also had one?

He's a pretty great update, but the dodging of the microscope mode is dumb. Then again, I'm one of those people who thinks that soundwave should always be a boom box.

There is no official microscope mode, only a fan mode that sort of looks like one. I will take a picture if people would like to see it.

That's really weird, because when we saw Perceptor announced at Botcon 2010, I thought I saw pictures of the microscope mode. It's surprising they would skip that mode when it's so ingrained into the G1 character's origins.

I loved what IDW did with Perceptor as a character by giving him the Sniper role for the Wreckers, but at least Hasbro didn't give him the "laid on his back and bent in half" tank mode like he had in the book.