I haven’t built a Lego kit in over 30 years. I have watched from the sidelines as some fantastic themes and kits have come out over the last few years but couldn't bring myself to pick one up. That all changed when I saw LEGO was going to be doing a couple of kits based on Star Wars The Old Republic. For those that don’t know I am an avid gamer and a huge fan of the MMORPG, Star Wars The Old Republic. So much so I do a weekly podcast on the very subject.

Star Wars The Old Republic takes place 3000 years before The Phantom Menace so the designs of vehicles and technology tends to be very reminiscent of the films but different at the same time.

This is the second kit released under this license and is squarely focused on the Republic heroes of the game. The Republic Striker-class Starfighter is the primary fighter of the Republic forces, and while it makes a lot of appearances in the game in space combat missions, it is not a fighter players can take control of. They appear as your wingmen, or if you are a SIth player they are your cannon fodder. 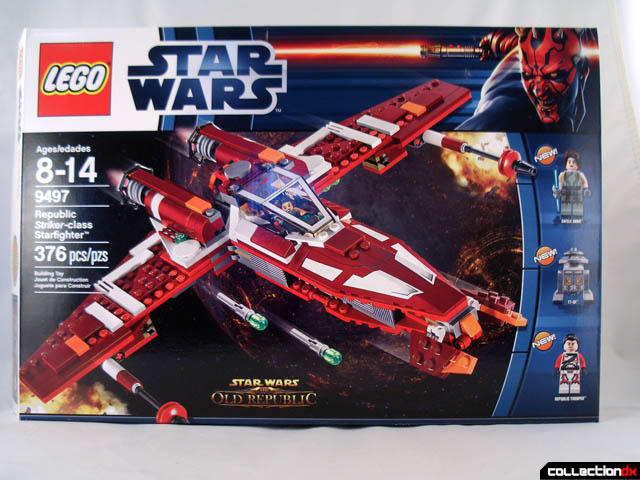 Inside the set includes three bags with pieces in them and a 80+ page book on assembly. 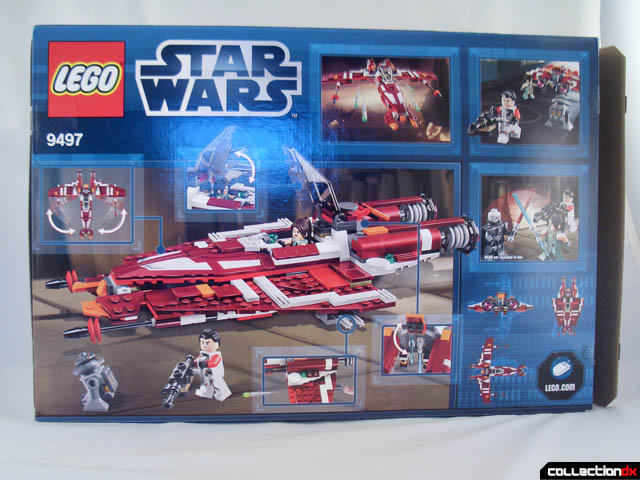 It took me a little over an hour to build and I have to say I had a lot of fun putting it together. You don't have to take my word for it, watch the video at the top and watch as I compress an hour build down to three and a half minutes. 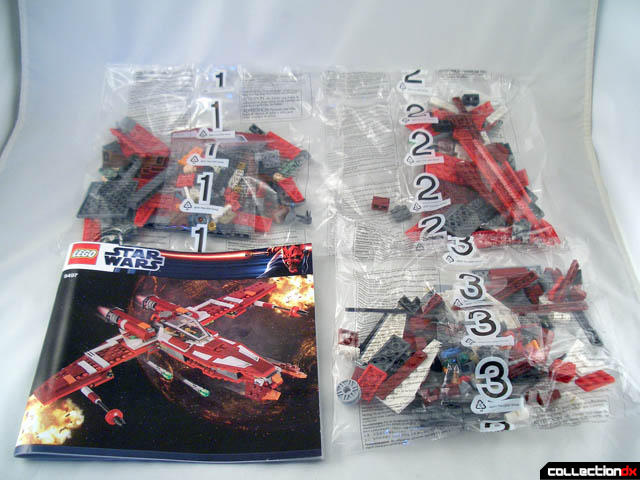 The instructions were very clear and it was nowhere near as daunting a task as I had originally envisioned. 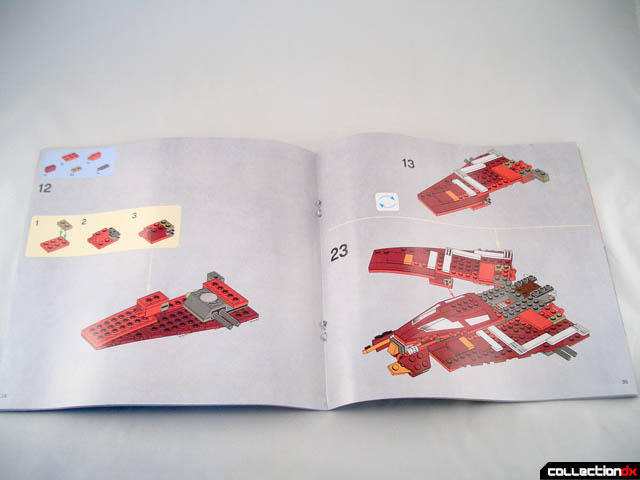 Once completed you have a very sizable fighter. Design-wise it is very reminiscent of the X-wing, or more accurately the Z-95 Headhunter from the Expanded Universe. 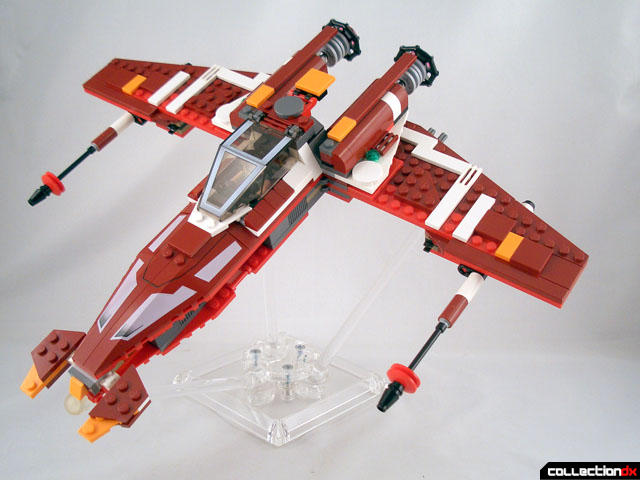 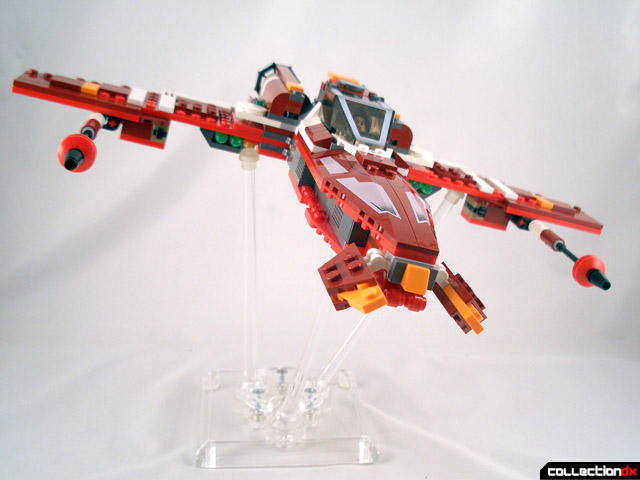 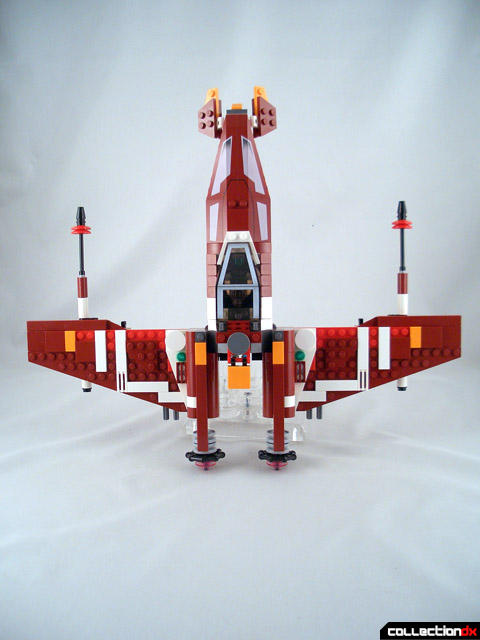 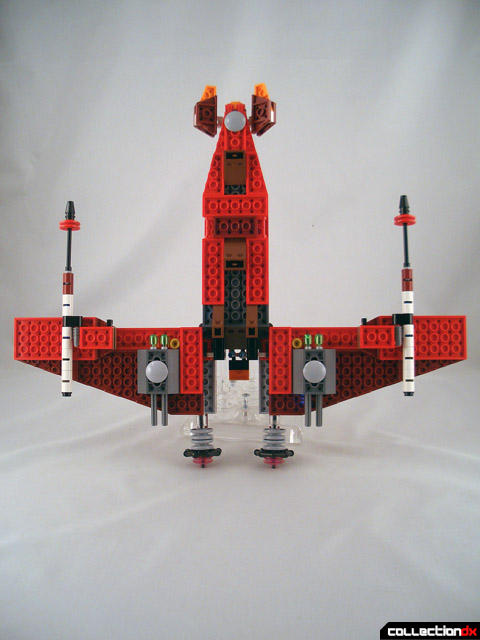 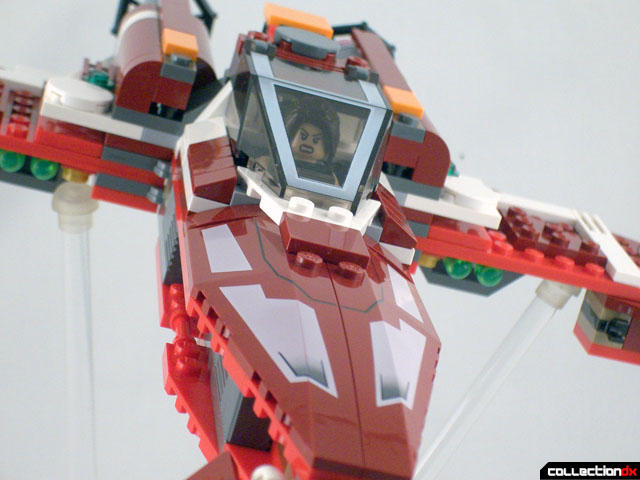 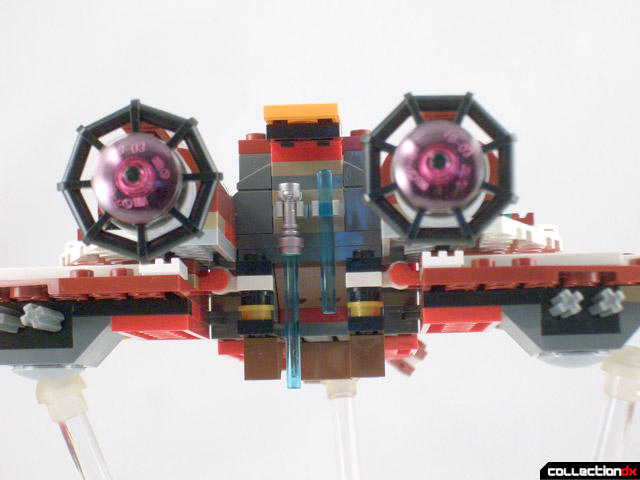 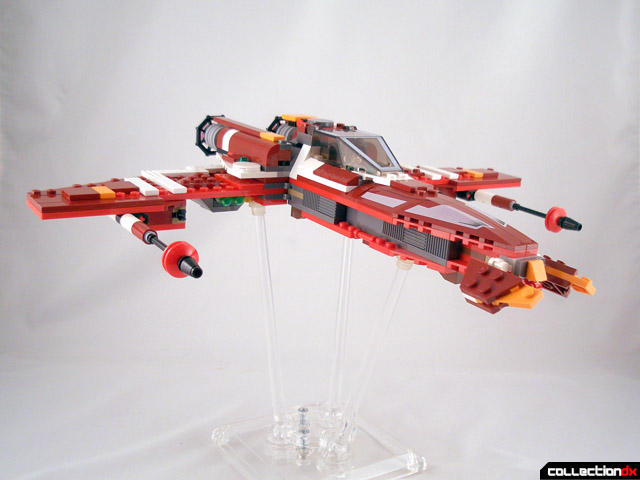 The wings or S-foils close for landing, giving the fighter a very A-wing look. 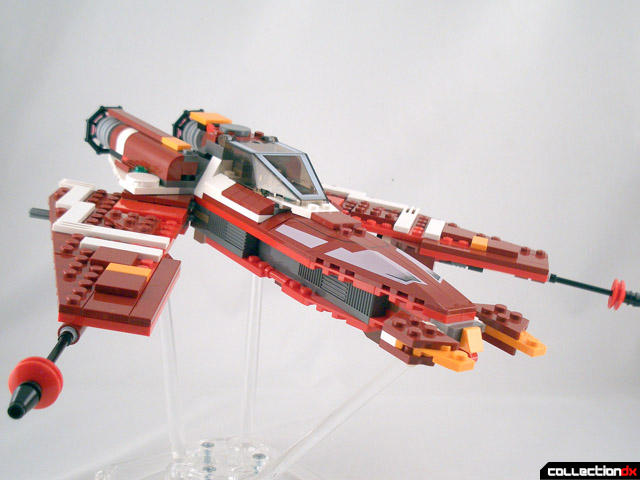 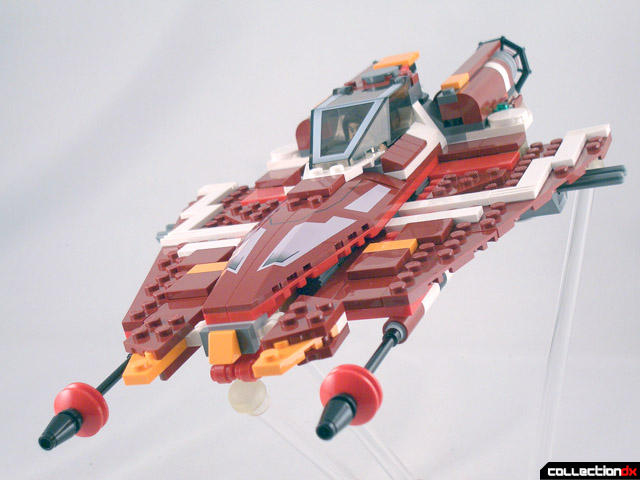 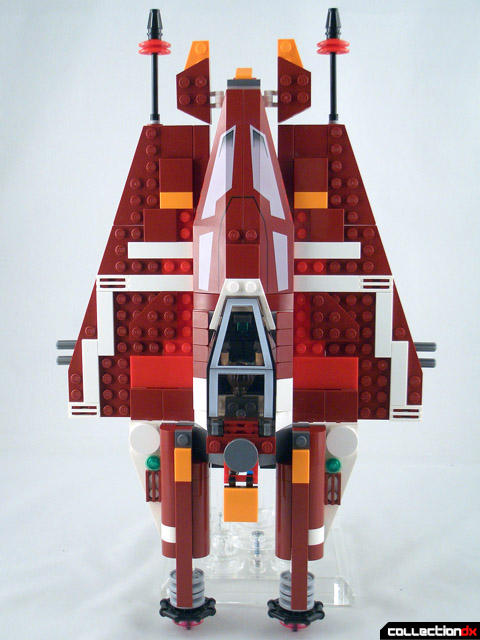 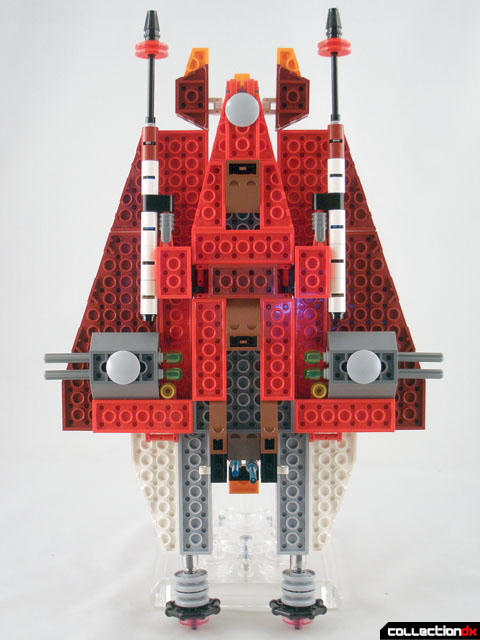 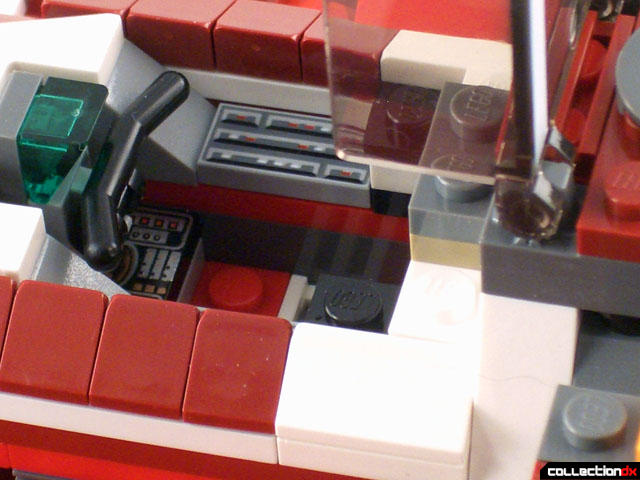 The cockpit opens to accommodate one of the included mini-figs. 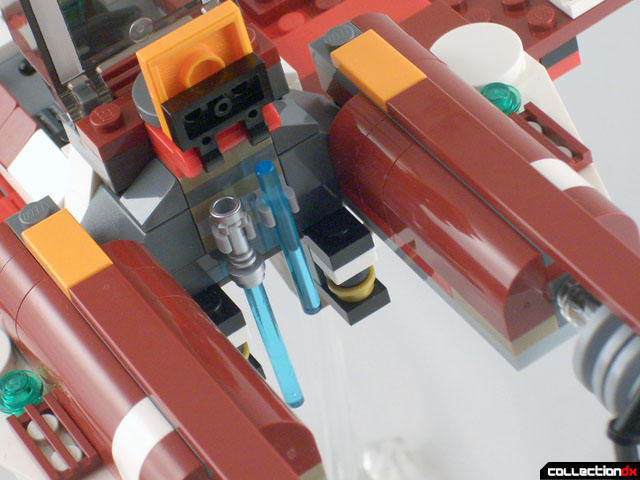 You can store Satele Shan’s double-sided lightsaber in the back of the ship. 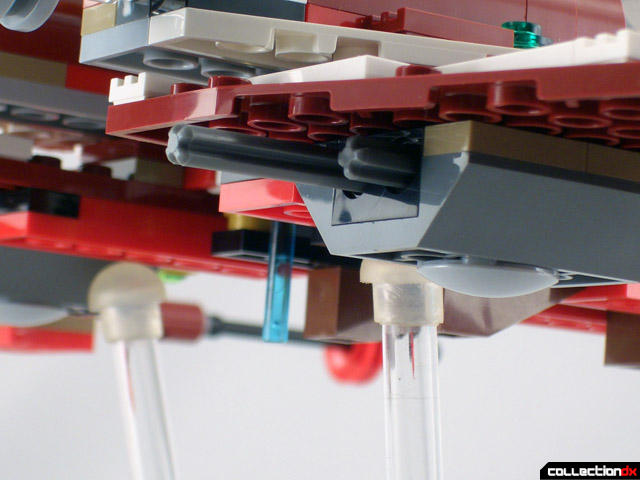 A feature I thought was cool, the four missiles in the wings can be “launched” by pushing in the rods behind them. 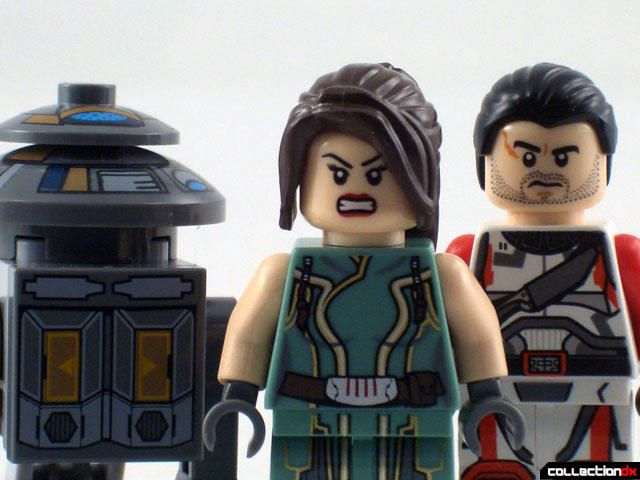 As awesome as the fighter is, it was the mini-figs that I was looking forward to getting. All of the characters included are styled as their younger appearance from opening cinematics of the game (these take place some ten to fifteen years prior to when the player enters the game.) 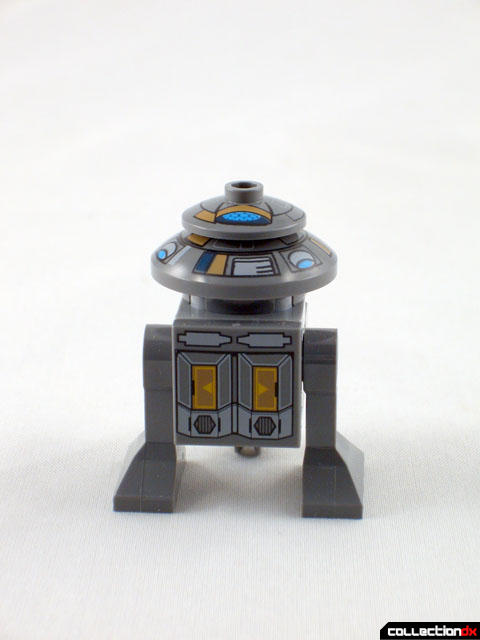 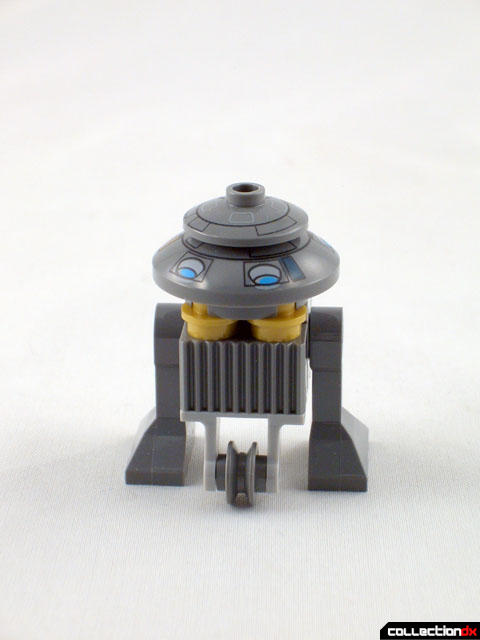 T7-01 is not only a prelude character in the cinematics, he is also a companion of the Jedi Knight player class. He accompanies me wherever I go on my Jedi Knight character. 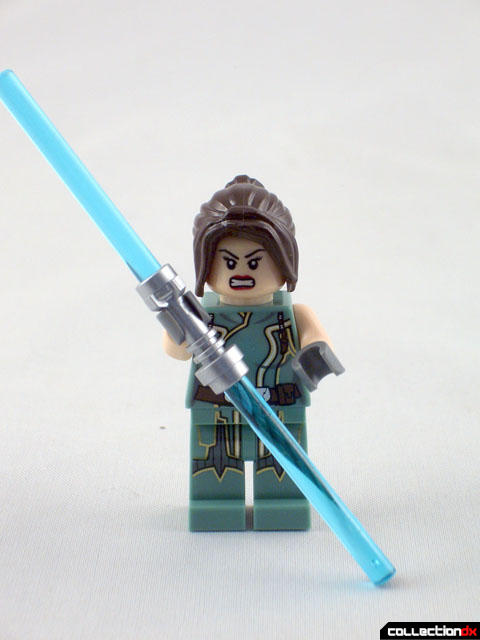 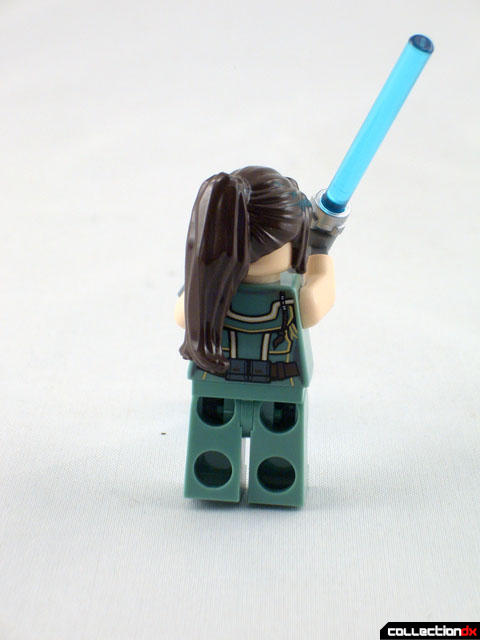 Satele Shan looks good. I just can't get over the “cute” of seeing this bad-ass hardcore characters as a cute mini-fig... it cracks me up. 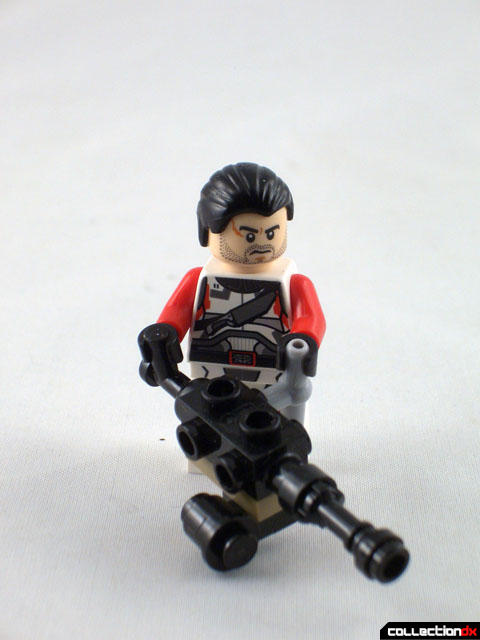 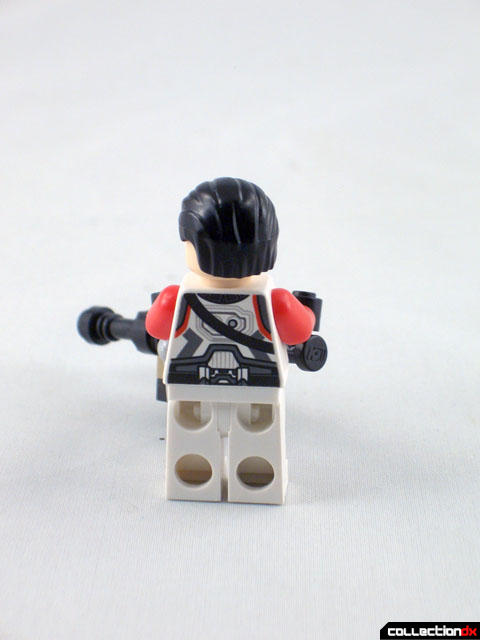 Jace Malcom is the last mini-fig in the set and looks as he does in his “Hope trailer.” His cannon is so heavy he can't hold it up without falling over.

If you are a fan of the game Star Wars The Old Republic you really should grab this before it’s gone for good and not easily gettable. The way these sub-licenses work (especially with videogames) the product tends not to stick around on the shelf very long.

I want to thank the folks at LEGO for being nice enough to send this over for me to look at because if they hadn't I wouldn't have broken down and grabbed it. I had so much fun and was so impressed with the finished piece I went and got the Sith Fury. Look for that review in the near future.

This looks like a pretty satisfying set even though I'd never heard of it until now. (For that matter, I looked up more Lego TOR sets that have come out along with this, and they all look awesome too.)

One question, though. I posted a comment on YT but it hasn't been answered yet. It looks in the video like the S-foils lock into their stored and extended positions. Is this true, or do you have to hold them in place yourself and the joints provide friction??

So they use clips? Nice! Those shouldn't wear out unless you put blunt force directly onto the clips themselves, and then they can crack. Don't treat those clips like your typical Japanese toy clip, though; they're not meant for connecting/disconnecting rapidly like we're used to.