The Red Xenomorph originates from the Genocide Novels and comic books. It is a genetic cousin to the black xenomorphs. In the novels, after the Queen Mother is killed on earth, the Xenomorph homeworld is thrown into a civil war with the resident black and red queens fighting a civil war for rule of the planet. 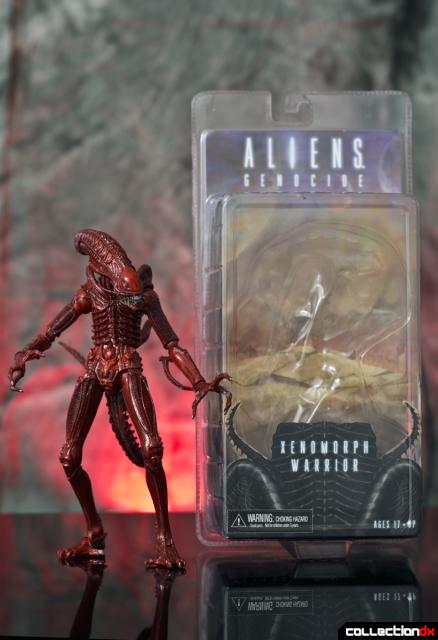 The Red Xenomorph is, for better or worse, the same as previous warrior alien releases with a few differences. Aside from the obvious color, this new Alien is molded in a more robust plastic than its predecessors. 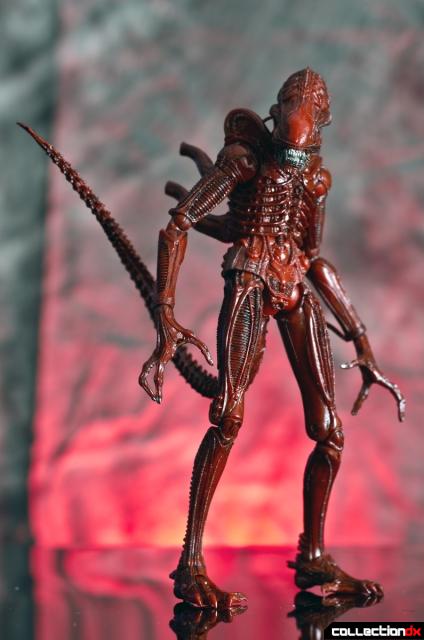 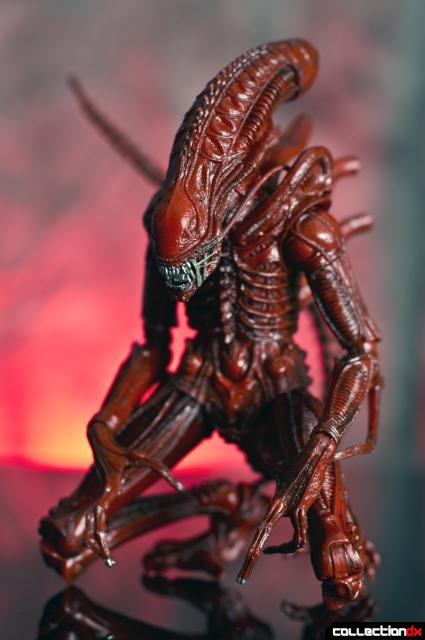 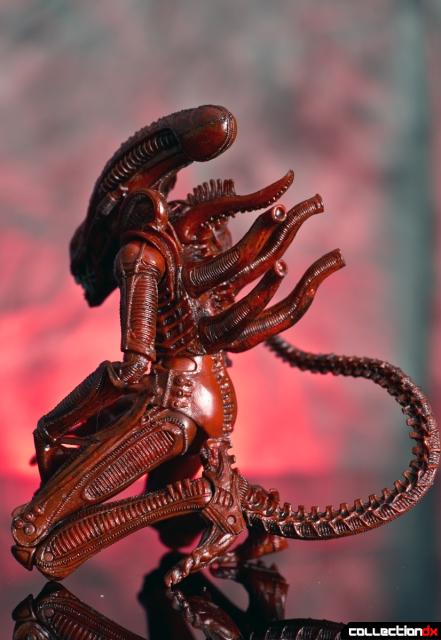 The figure stands an imposing 9 ½ inches tall and is advertised as 7 inch scale, but I find he works with 6 inch scaled figures just fine. 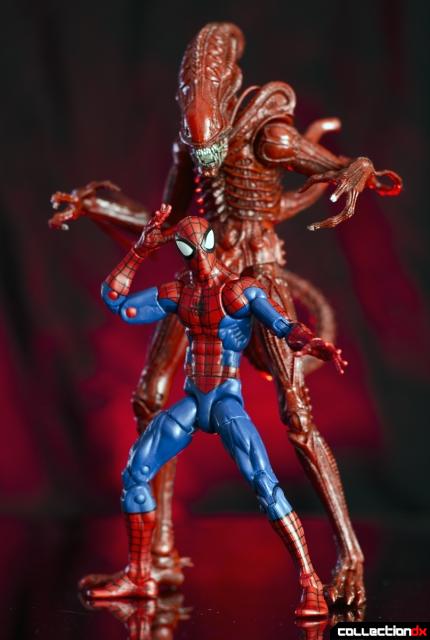 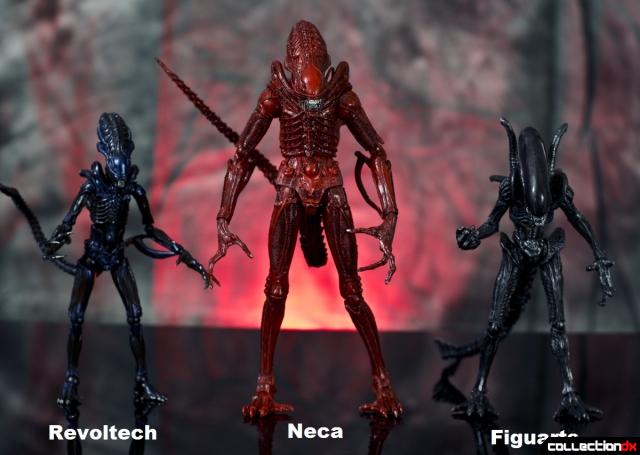 This is a good thing, and bad thing. The figure retains its excellent articulation and imposing size, but also inherits the joint problems inherent to previous releases. 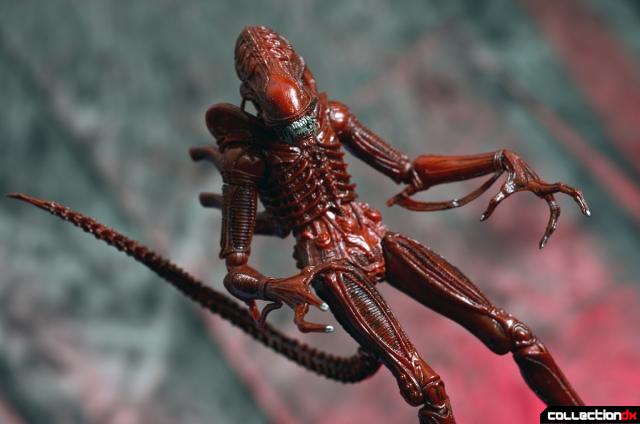 The upper body on my Xeno is as close to perfect as can be. Just like previous releases it has a removeable back fin to allow for more head movement, and an articulated inner and outer jaw, and excellent articulation and range of movement in the arms and legs. The lower body is a different story. The hips and knees on mine are so loose that I can barely keep the figure standing long enough to take pictures of it. On top of that, the ankle joints are very stiff and have these weird knobby ratchets that don’t like to stay in place. Also the right foot likes to pop off when I try and adjust the ankle joint. Additionally, the right leg came warped in the package but a bath in hot water sorted him out. All of this comes together to make a figure that is quite a chore to pose. I would think I just got a dud, but my blue Xeno has the exact same problems. Luckily, the figure looks fantastic in a crouched pose and has more than a enough range of motion in the legs to pull off some very nice crawling poses. 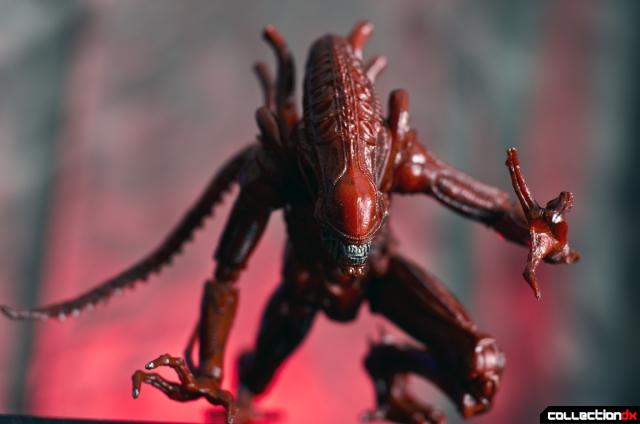 The paint apps are very sparse. Mouth tendons, fingernails, and teeth are the extent of the paintwork, which is fine for the subject material, although some paint on the toenails would have been nice. The figure also has a dark wash from head to toe that makes all the sculpting pop. For the most part, the paint apps are nicely applied, the only exception being the paint on my Xeno’s teeth. There is quite a bit of overspray which ends up making him looking like one of Immortan Joe’s boys waiting to enter the gates of Valhalla, all shiney and chrome…. 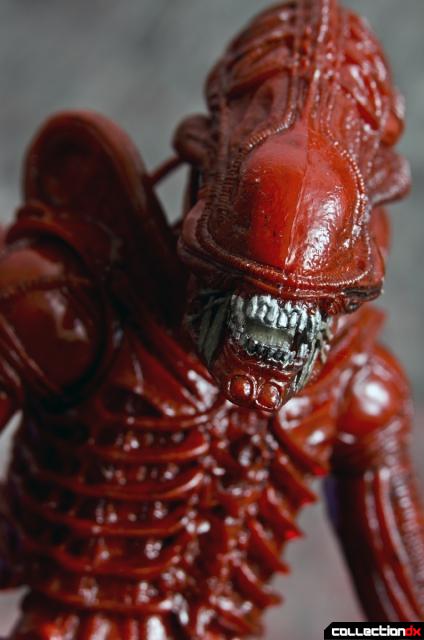 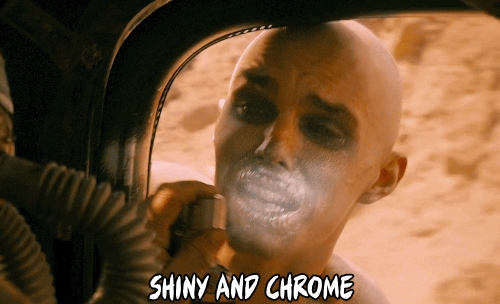 In closing, the red xeno is pretty much what I have come to expect from Neca. A very well sculpted, and for the most part, well painted figure that gives the appearance of a much more expensive toy on the shelf, but feels very much like a $19 toy in hand. 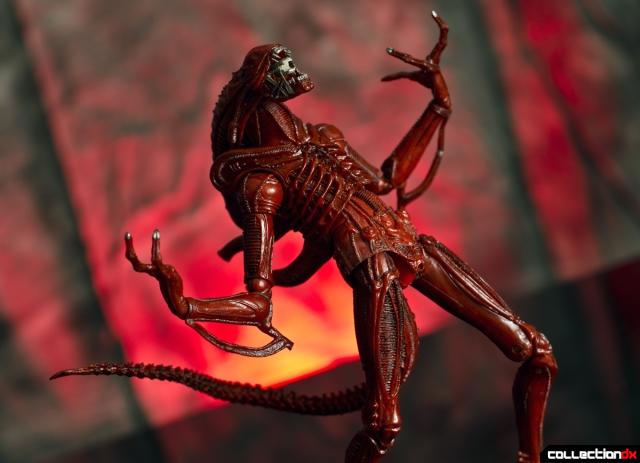