Red Ranger was provided by Tamashii Bluefin! Pick up your Bluefin items at BigBadToyStore!
Usually in the opening paragraph, I give a short description of the show or movie that the piece I'm reviewing comes from. Not this time. Oh no, not at all. I'm just going to say this: I really really really REALLY love Power Rangers.
Hey look, I made a video! You should watch it! THEN CONTINUE READING MY GLORIOUS WORDS.
So here is the Red Ranger, finally given life in the form of the S.H. Figuarts treatment! I've been waiting for this toy my entire life. I will try not to let my enormous nostalgia take over this review, but I'm making zero promises. Mighty Morphin Power Rangers is probably my favorite television show, and the reason why I review toys now. Power Rangers introduced me to the world of Japanese Tokusatsu, so without it I never would have seen the wonders of Kamen Rider and Super Sentai. In a way, I kind of owe my life to Power Rangers. Good Lord, that sounds terrible out loud. I'm just going to ignore this and continue with the toy review. 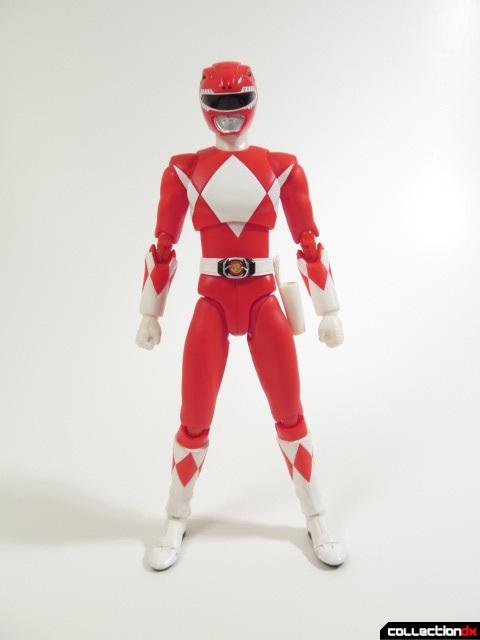 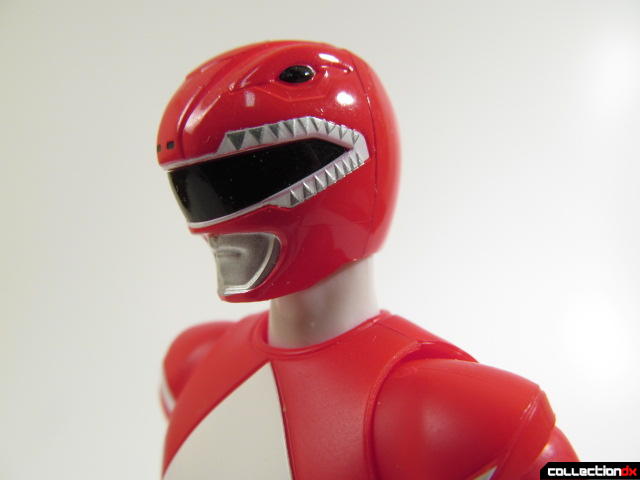 The figure is gorgeous! The red paint looks great and the sculpt is awesome. There isn't a single detail missing from this guy, and I'm thankful for that. I would've cried if they would have messed this toy up. Seriously. I love Power Rangers. I also really like that Jason here looks really sleek instead of 'roided up like Bandai of America toys. 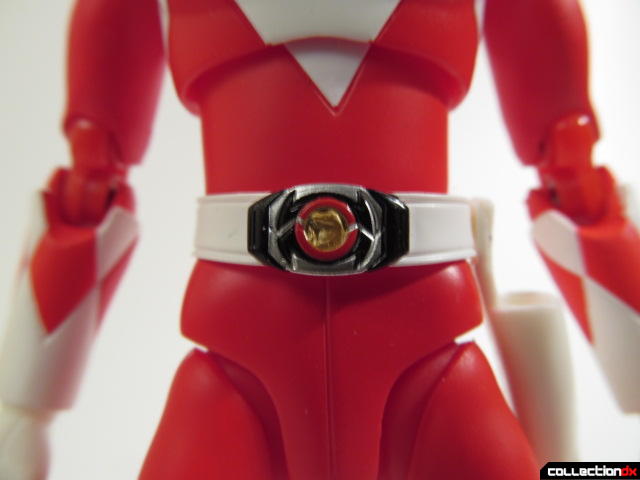 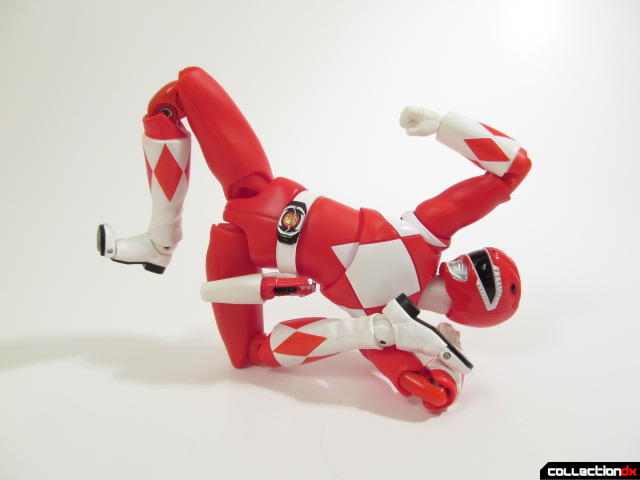 Articulation is pretty much perfect. He has ball-joints and double-joints everywhere, and every joint feels like it matters. While it doesn't have a bicep swivel, the shoulder joint is so well done that I don't even care. I can still put him in any pose I need. 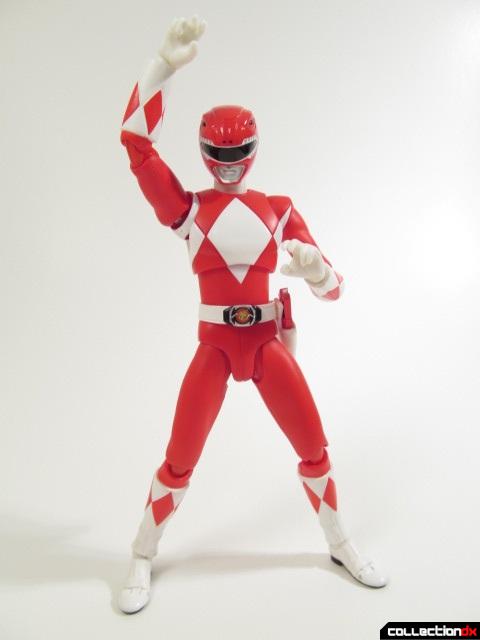 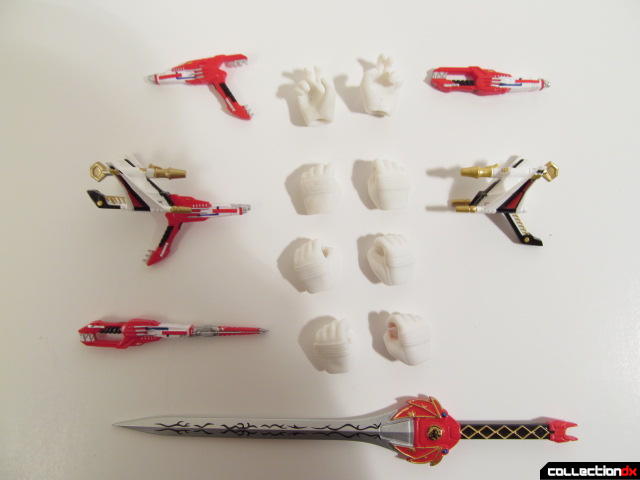 Jason also comes with a mountain of accessories! While he has five pairs of hands, three of those pairs are slightly-molded-differently holding-things hands. The other two pairs are fists and posing hands. Of course, I like the posing hands because they look like air quotes. 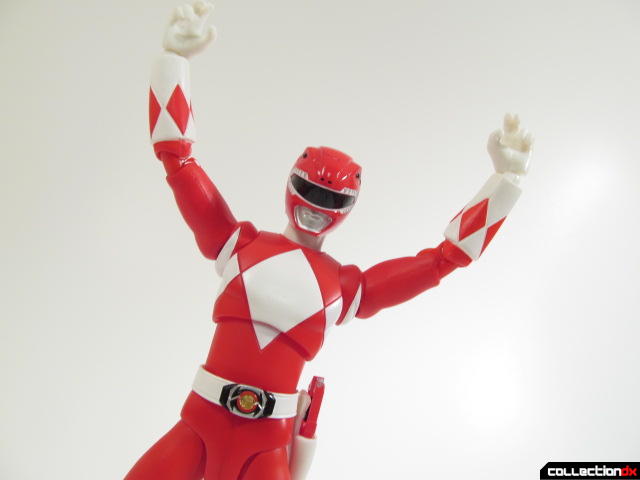 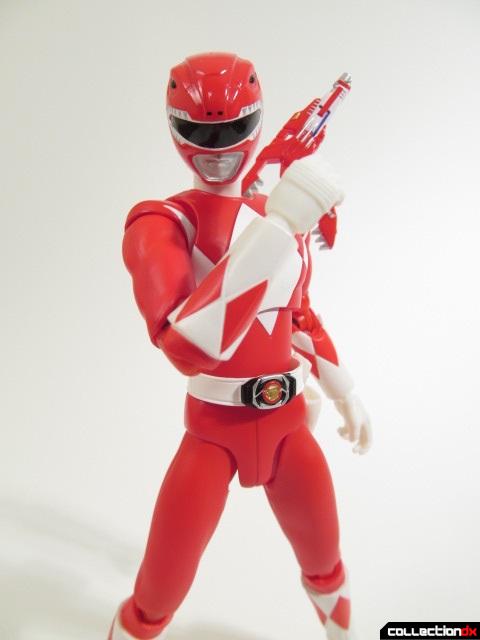 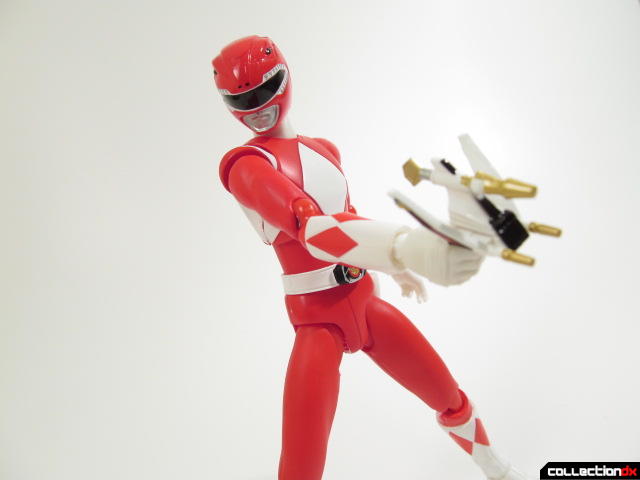 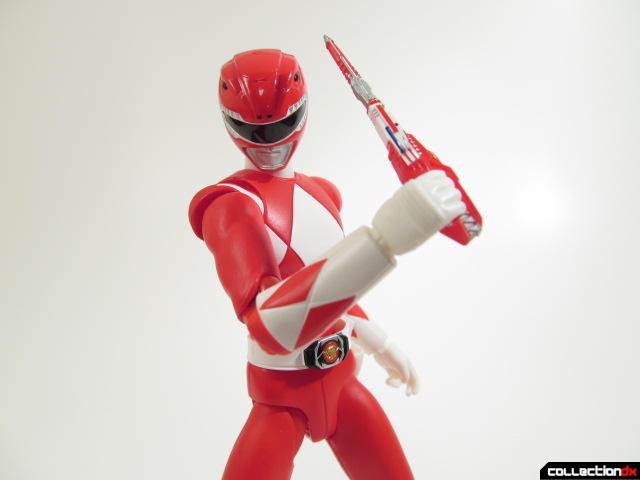 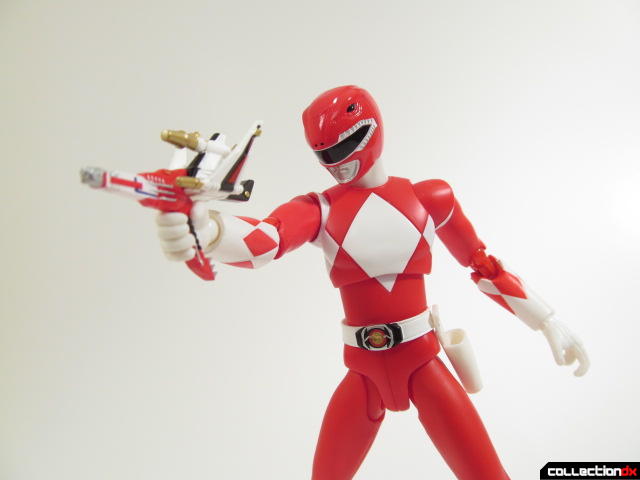 I should mention that since this is the US release of this figure, it doesn't come with the bonus Akibaranger parts that the Japanese release of Tyrannoranger came with. I know some people will be upset with this, but I think the large majority of people are getting this because it's THE RED RANGER. 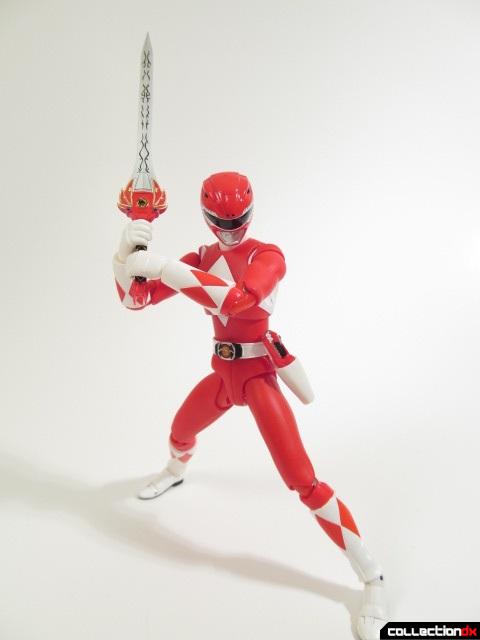 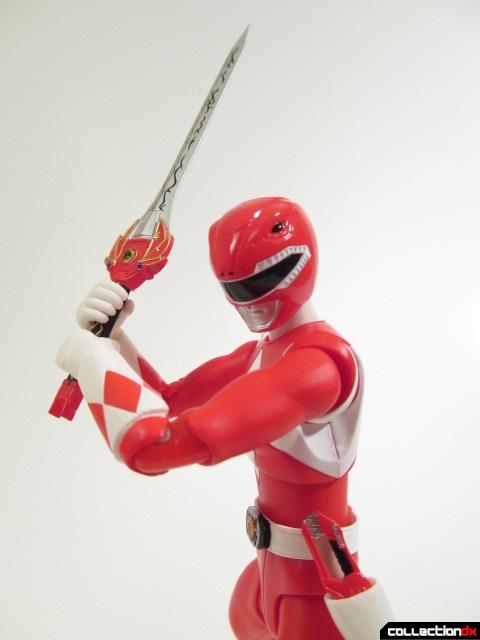 Bluefin also brought the Green Ranger to the States at the same time, so you can maximize your play value by picking them both up! Seriously, the Green Ranger looks GREAT alongside the Red Ranger. 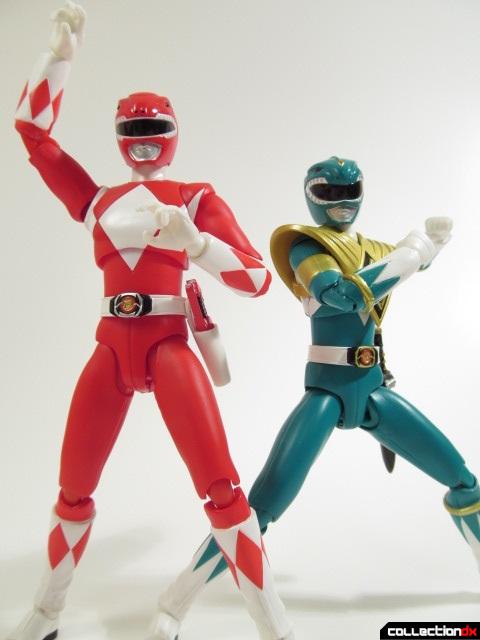 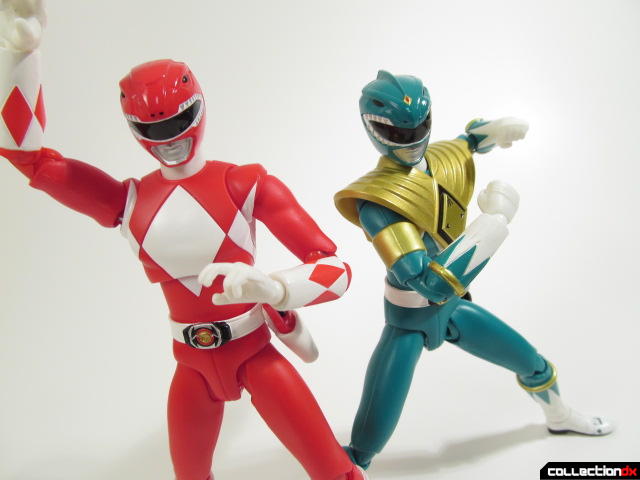 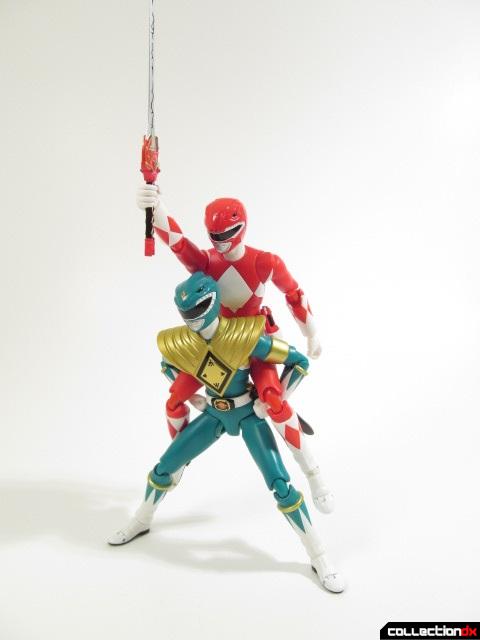 This figure is worth any fan of Power Rangers' time. I'm sure there are others out there who feel strongly about Power Rangers, and they finally get the action figure they deserve! You know, an awesome one! 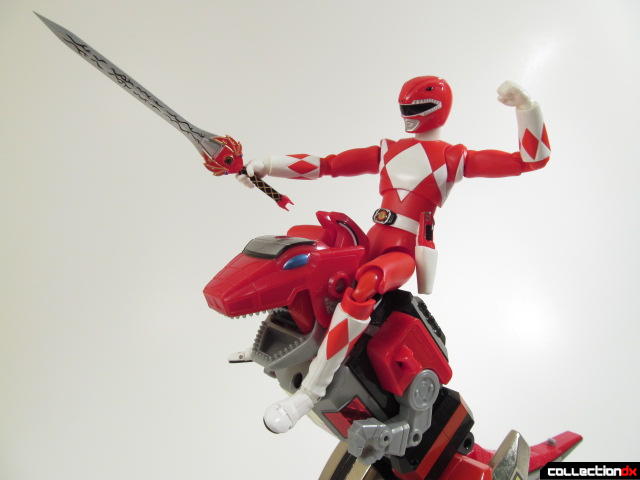 (looking at the piggy back riding rangers)

"Matter of time. Rangers are obsessed with combining. Put two of 'em in a room and within seconds one will be standing on the other's shoulders. Fact."

Thanks man! I'm glad you liked it!

i will be avenged!!!

No! You shall never overtake me! HAHAAAAA!!!!!

all your reviews are belong to me.

ill do a special recording of guiles theme, maybe with an orchestra, as backing for my triumphant victory!

..Sounds epic! Now back on topic, if you two fight and one of you grows, who gets to pilot the giant robot to fight the other?!

For the better xD

Jmann, you might want to do yourself a favor and take a dive. Even if it's a fight to the death, there's no shame in losing to a girl... unless you cry.

As the great Sparkle Witwicky once said...

"Danny, boys can cry but not out loud. Men don't cry; they only get stronger"

GLORIOUS! It shall be mine! Eventually.

But yeah, I've been waiting for them to get to the classic Power Rangers! They look friggin' fantastic so far, and pretty much everyone reviewing them so far is getting a kick out of them. And yet none of the reviewers have them piggybacking in the ultimate combination technique! Kudos, you magnificent gentleman.

Thanks a lot man! I highly recommend picking them up!