Red Fighter (full name: Battery Operated Super Robot Defender of Justice Red Fighter) belongs to a strange and obscure sub-genre of Japanese robots, the MekaRobo. MekaRobo is the missing link between tin and diecast. Each has the proportions, stature, and motorized gimmicks of the classic tin bots, infused with super robot funk. 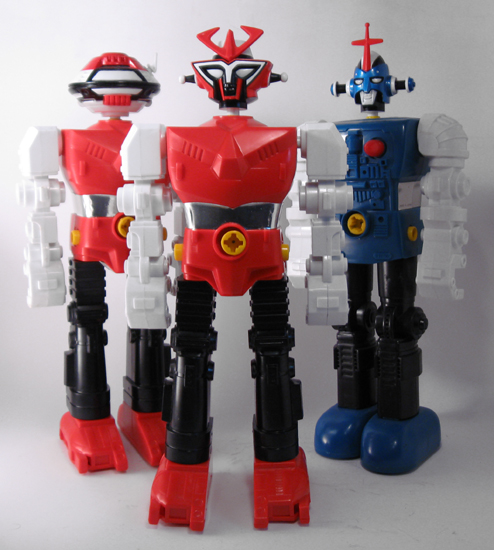 Popy only released two characters in this format, Combattler and Gaiking (MR Gaiking was released in the U.S. as Shogun Warrior Zargon). These toys used a kit of parts to create the robot forms. These parts could then be variously reconfigured into other robots or vehicles. The two original molds have been extensively bastardized, bootlegged, and knocked-off. Bandai itself released pared-down (read: bastardized) versions of these toys a few times in the U.S., as the Red and Blue Fighters; and the Red and Blue Motionic toys, respectively. The red versions are based off of the Combattler molds, the blue versions off of the Gaiking molds. I believe all four have unique head sculpts.

The Red Fighter comes in a generic but winningly disco-tinged box (7.5”x 10.5”x 4”). The front features a soft-focus, gleaming photograph of the toy, similar to contemporaneous Micronaut packaging. 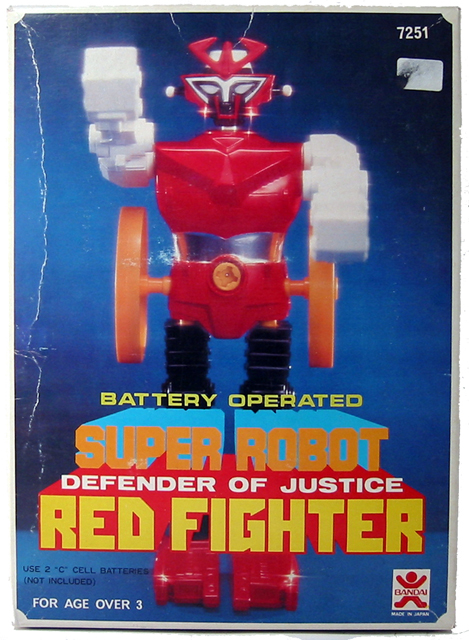 The top and sides feature more photographs, including parts and alternate configurations. 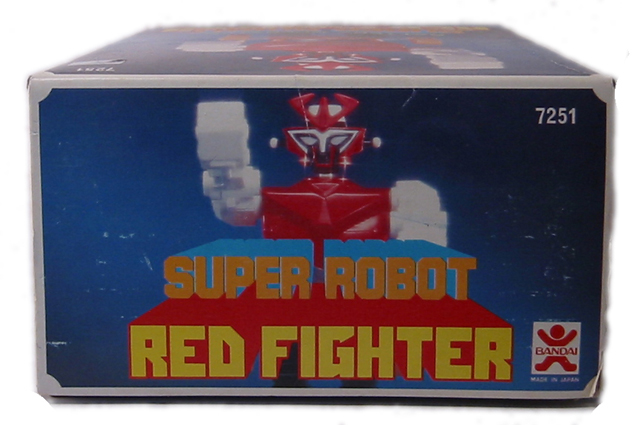 The pieces come unassembled in a corrugated cardboard tray. A minimal brochure is included. 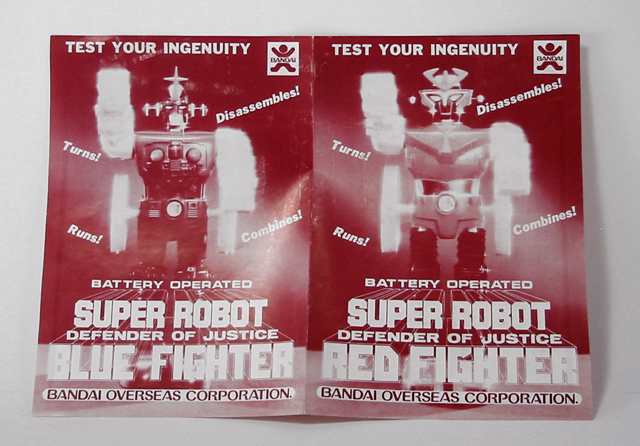 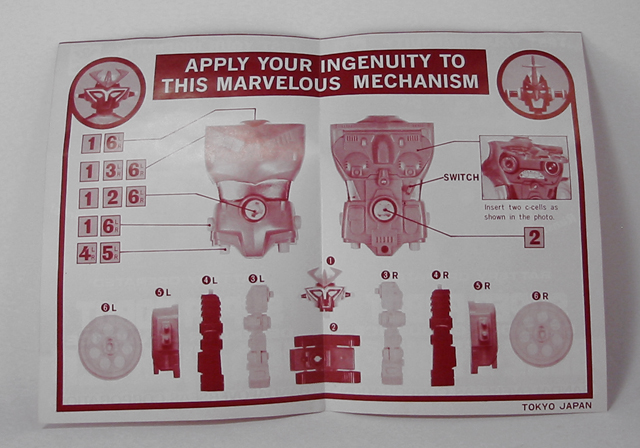 The set consists of (1) head, (1) Torso, (2) arms, (2) legs, (2) feet, (2) wheels, and (1) set of tank treads. The torso has motorized rotating plugs at the shoulders, head, belly, and back, with the latter two plugs operating the treads. The Leg plugs shuffle back and forth at the hips. Everything is sturdy ABS, with added mechanical heft in the torso. The tank treads are rubber. 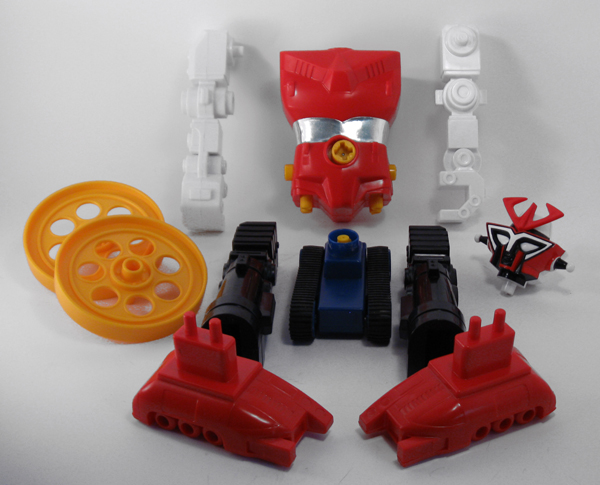 It all adds up to a good-looking robot with a couple of extra, largely extraneous, pieces. The original gimmick, the microman-like interchangeability of the pieces, barely remains. The original arm components were replaced with fixed, clumsy arms which clash with the rest of the design. Additional accessories and components were left out altogether. 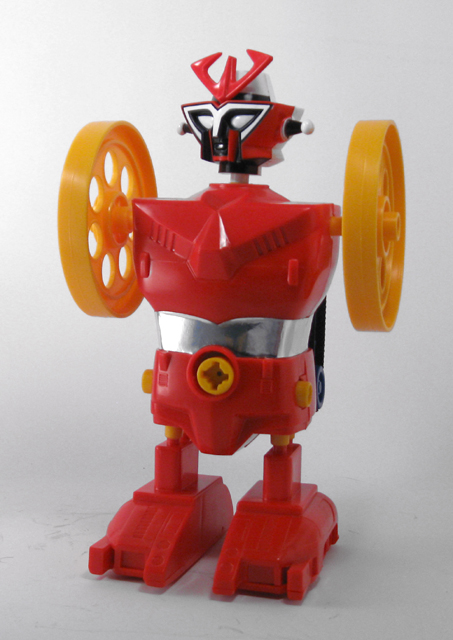 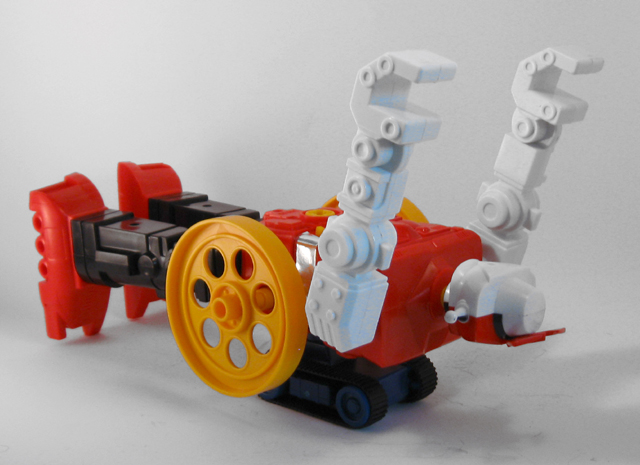 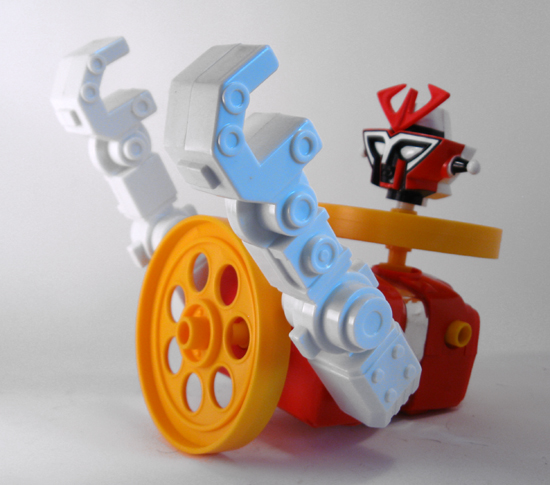 I don’t find the limited building possibilities terribly compelling, but I can see a child still having fun with them. I’m only really interested in the bot. Red Fighter stands at a respectable 14” tall. I like the scale of these toys. They fit nicely between Popy DX toys and Jumbos. 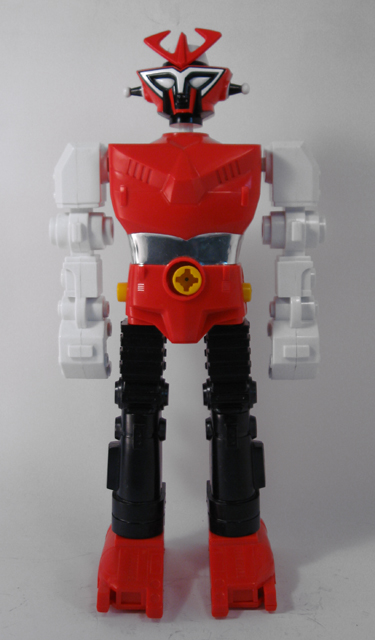 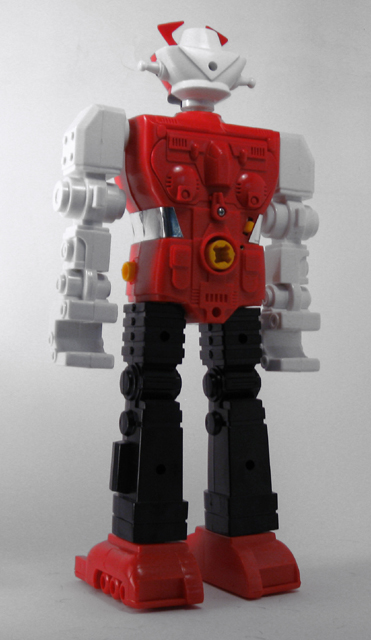 Like most of the second generation MekaRobos, Red Fighter’s head is the best part. It’s really a beautiful and unique design, and nicely detailed. I’d love to see the rest of a robot that properly matches it. 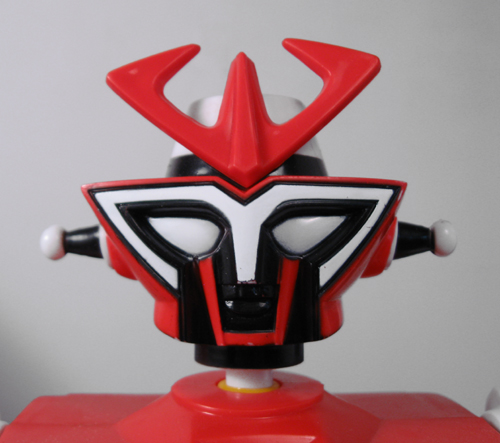 The rest of the bot is solid and well-proportioned, if uninspired. The lack of paint applications and decals really hold back the aesthetics. Without the finish detailing, the otherwise fine sculpting looks anonymous. If you like motorized action, you can make the robot shuffle, drive, spin his arms, and so forth. 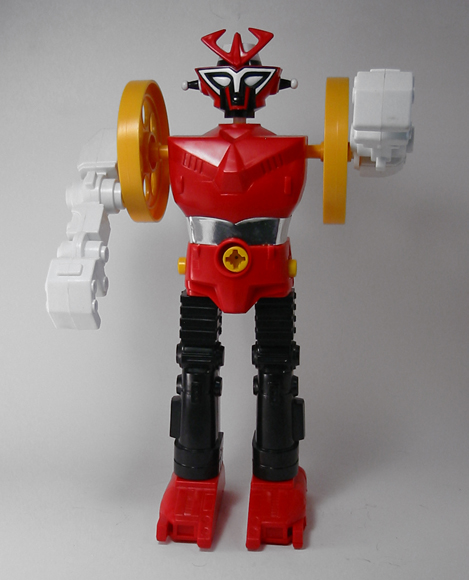 The MekaRobos are fun to collect. I like their “otherness”. Each is vaguely familiar, but distinctly different from its Popy relatives. They nicely fill a few gaps in my collection. 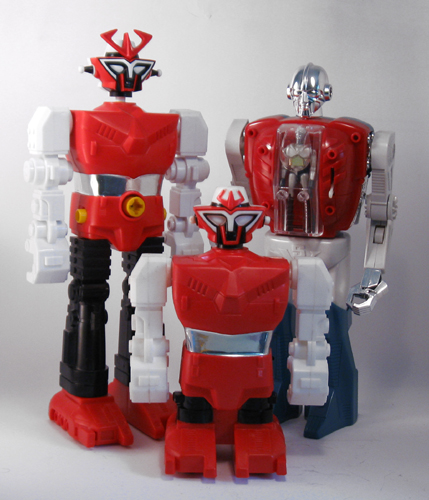 A quick note: Most of what I know about MR comes from Matt Alt's Excellent article here.

Great review! These toys have always been just off my radar. I'm interested in them, but have never picked them up. Seeing that picture of all 3 makes me want them more than ever now.

In the last pic, what is the head on the shortest bot? Do you (or anyone) know who it's originally from? Or is it really a unique design? I actually have a junior machinder (Rocky Robot) that uses that exact same head! Also, I noticed that, although they are not the same, the upper arms are very similar to the arms of the Kimpo Warrior I have. A couple of the segments are out of order/modified, but very, very similar.

I trust you'll reviewing the others? I look forward to it...

I thought that the Frankensteinian nature of these might appeal to you. As far as I know, the head on the small version (push and go! you squash his head and he rolls across the floor) is just a boot of the original RF head (I believe this, as well as the arms, were done in-house at Bandai, probably for this release), though simplified.

Matt's article has a terrific Italian variant that would look right at home next to Kimpo and Space Valour!

The first thing I notice (after the bitchin' head sculpt) is that it has Combattler's chest and feet. I don't recognize anything from Blue Fighter, though.

Blue Fighter's torso is the Gaiking torso without the skull. It still retains the eye missiles. BF's arms appear unique from either original MR. I'm still not sure about the legs of either model- they may be unique to the second generation too.

The originals came out in 76. I've seen a Sears catalogue scan from around 82-84 showing the Fighters.

I had one of these when I was a kid. I got it at a flea market for $4 in the early 1980's.
Right off the bat, I noticed that it had Combatra's(I knew him from the Marvel Shogun Warriors comic book, I didn't even know the Combattler V anime even existed at the time obviously)body and feet.
I always felt it "was" Combatra and that I had gotten the wrong head with mine somehow. lol