My Little Pony: Friendship is Magic was one of the programs funded as our lords at Hasbro to fill airtime on their newly created Hub Network, which is an entire channel designed to sell Hasbro products. The original My Little Pony line of toys was created as the equivalent girlie toy line for the much manlier properties of Transformers and G.I. Joe. As much as our lives have progressed, toy marketing is still very traditional. Somewhere in history a person of the female persuasion was (consensually) associated with a horse, and as such women are generally perceived as equestrian enthusiasts.

However it seems that the planets aligned in such a way that Hasbro decided not to hand their decades old property to just anyone with a copy of Flash and some goofy voices, but acclaimed writer, animator, and director Lauren Faust. As she created the quirky Foster's Home for Imaginary Friends, Faust knew full well the potential of cartoons to tell memorable stories and tell positive messages about life while simultaneously shilling toys. Some unicorn apologists will tell you that this show has achieved something that a lot of corporate mandated girl's entertainment fails to do most of the time, which is telling growing young girls that you are who you are and that all of your talents and abilities can be used to benefit both yourself and your friends.

The result of a Faustian pact with Faust, My Little Pony: Friendship is Magic has soared to great heights in terms of popularity on the internet. The result is that America now has its own equivalent franchise to Japan's beast which can not be fed: Touhou. Fans both young and old (but mostly old) have covered the internet with a veritable stampede of fanfics, fanart, fanshows, fanedits, and fanfans all in the name of the herd. Not that it changed the overall makeup of our vast Gibsonian future, but it maybe threw a little sparkling paint on some of the more infamous cesspools.

Which brings me to the subject of this review. 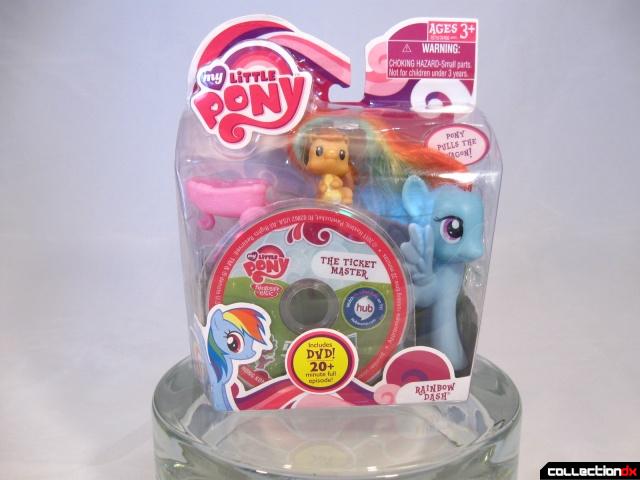 Here we have a typical pony in its original C10 packaging. The rather minimalist design of the plastic coffin uses enough shades of pinks and purples to make Kunio Okawara blush. It is sealed with copious amounts of cardboard glue and tape. 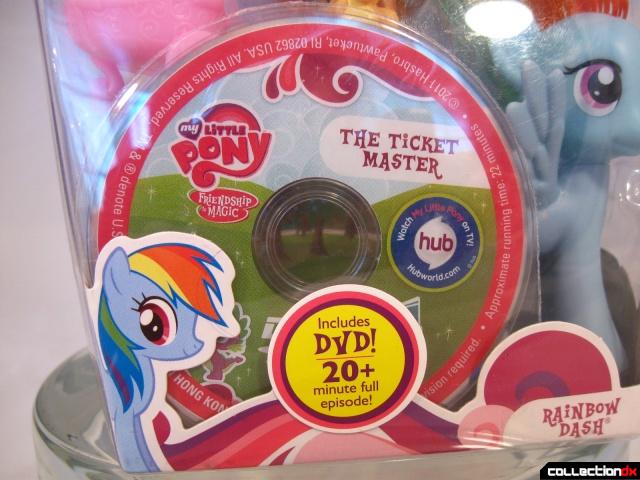 As a nod to the old timers buying this toy, the figure includes one of those silly mini-DVDs with an episode of the cartoon. I say this is for old people because any modern eight year old has already torrented an entire season worth of this cartoon as well as several cam rips of popular movies. 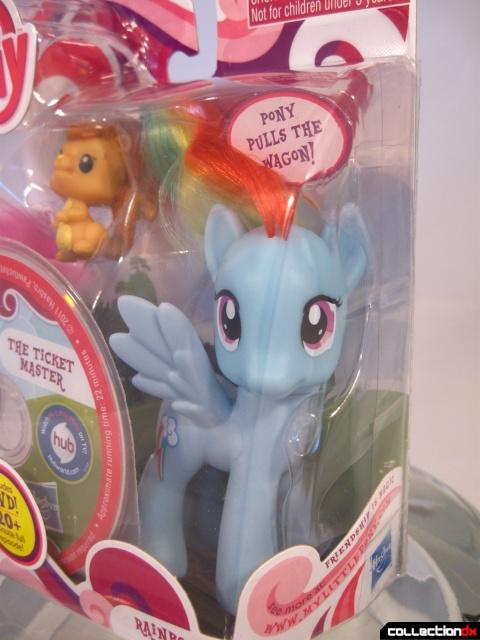 I have been informed that the pony mold in question is in fact a slightly retooled version of an existing pony. Hasbro, not being ones to throw anything away unless it's Generation 1 Sunstreaker, has done their best to dress up what I have heard is an undesirable pony sculpt in the likeness of this character. A we all know,sShow accuracy is in fact very important to fans. This toy does not pass that test as you can clearly see the actual figure is a rough representation of the crisp cartoon image on the lower left of the package. The singular action feature of this toy is simply stated, "PONY PULLS THE WAGON!" 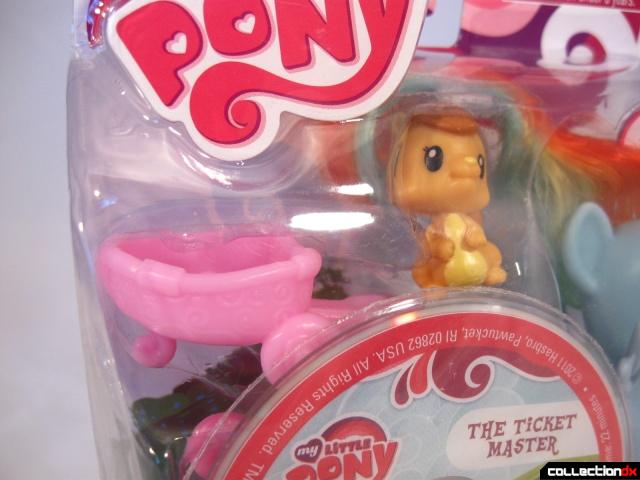 The wagon itself is a simple affair that may or may not have working wheels. It is cast in girl toy approved pink. Also included is a small squirrel thing that reminds me of my youth as a Pokemon (BLUE) trainer. 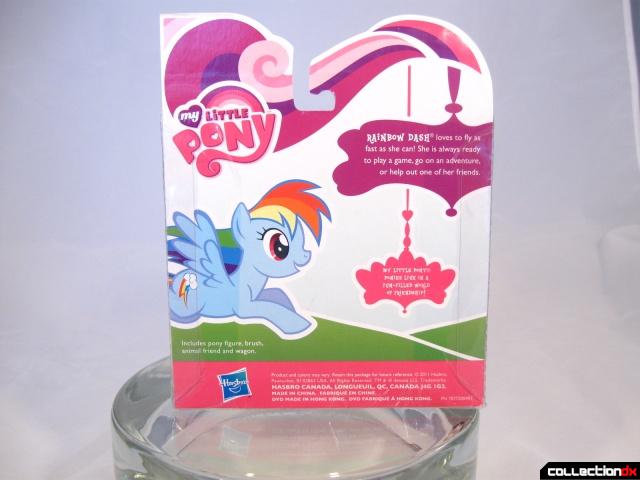 The back of the package is even more minimalist than the front. Presumably this is to make it easier to visually digest for the (intended) audience of the show. 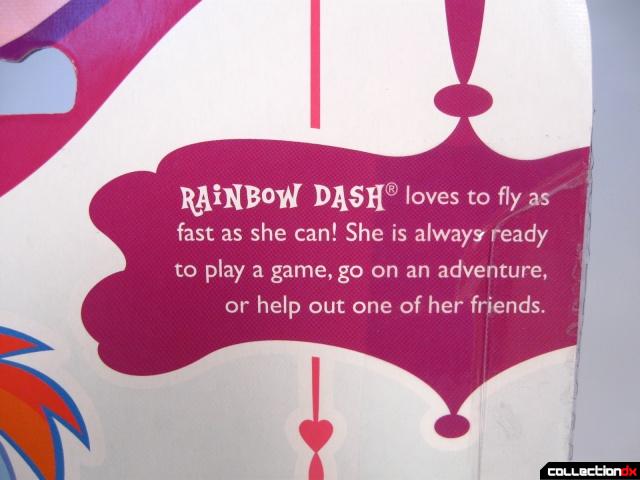 The pony in the package is Rainbow Dash. She is an athletic young pegasus who one day dreams of joining the pony equivalent of the Blue Angels. Using her gift of flight, she soars through the skies while pushing the envelope much like a pair of young robot pilots I know who happen to share the same voice actor. Her reputation as a headstrong tomboy (and fabulous hair) has earned her the ire of some people who believe she is promoting homosexuality. If you are a person who is bothered by the apparent sexuality of a cartoon pony, then the problem is with you 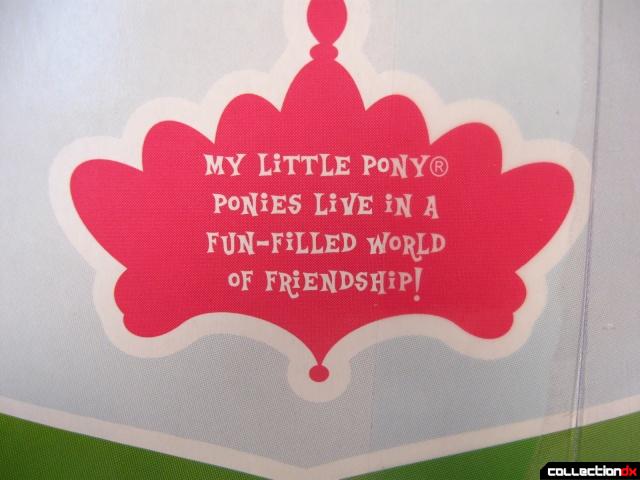 Now I would like to thank my fellow reviewer and bro, Dkun, for giving me this toy as a belated birthday gift.

Before I end this review, I would like to answer the question many of you must have on your mind. Will I open this toy? My answer is no, I will not.

Because that is how they infect you!

I know I shouldn't allow this, but I see what you did there. Any more pony reviews go on OCDX, got it veef?

I apologize for the error cause by my haste.

This is what happens when the postal service is faster than FedEx.

... If you don't open the toy, how will we talk about the cartoon on the DVD man?

I must admit I was half expecting a category for MLP because of our ties with Toyboxdx :3

Yeah, my wife and I got some set with these ponies with molded hair, but that's about as close as we can get to "show accurate" right now. I'm probably gona skip all these until they do something more like the show. It's friggin' HILARIOUS. I'll totally get some ponies someday if they design 'em off the show.

What's going on? A pretty pony review on this site seems really odd. Is the world running out of chogokin and transformers? I guess it's funny or a joke? Tie in to destroy all podcasts?

We didn't post our podcast on the front page.

Oh man, glad you mentioned it. I thought you hadn't posted a podcast this week. I swing by on Sundays/Monday looking for your podcast post. Then I saw this pony review and thought it was a gag tied into the review you guys did of the pretty pony TV show.

We do a new podcast every week, but we didn't post this one or our My Little Pony podcast to the front page due to it being too far off topic. At any rate, this review is unrelated to the podcast, but enjoy it nonetheless. (Veef, open the toy up already!)

Not to make light of MLP or the scale of the meme craze it has generated, nor its prior history as a toyline well before ZUN first started making a certain modest series of indie shooter games all by himself (music, art, coding, everything) featuring a certain lazy Shinto priestess, a mischievous witch, and an ever increasing number of youkai, gods, and more....

But! Some perspective is in order, my comrades! *adjusts and taps mike*

Touhou is an open-source creation (and fandom), independently published and allowed to spread and grow exponentially in a variation of the Creative Commons license. MLP will never tread into that territory, being corporate-owned trademarked Hasbro property. You can compare MLP to, say Pretty Cure, Transformers, or even Star Trek, but to compare it to Touhou is an awkward analogy which ignores the entire self-feeding grassroots basis of the Touhou "movement". The scale of the output of Touhou fandom in so many genres of indie games, music (without exaggeration, I lost track of how many hundreds of different Touhou jazz remixes I have listened to, not to mention hard rock...), and so on over the last decade and a half is simply breathtaking. MLP may be the emergent popular newly revived fan obsession here, but it's just a foal when compared to what is out there under Gensokyo's sun.

And no, I'm not even talking about teh multitudinous Touhou pr0ns when I say that (which statistically are almost equal in number to non-pornographic Touhou fan published doujinshi--a very unusual ratio for such works), though I shudder to think of what the equivalent is for Bronies...

A better comparison for the open-source Touhou fandom? GLYOS SYSTEM. ;)

Hey, your analogy is great: it gave me a chance to rant about Touhou in a comment thread for My Little Pony on CollectionDX. My life is now complete.