Ah yes, so now we come to Argus. This toy is a strange bootleg jumbo combining parts of Raydeen with a similar base to the one also seen on the Mazinger Z: Paladin de la Justicia toy from Argentina. It even features the same gimmicks such as firing fists and a missile launcher in the stomach. Unfortunately, I am missing the missile. 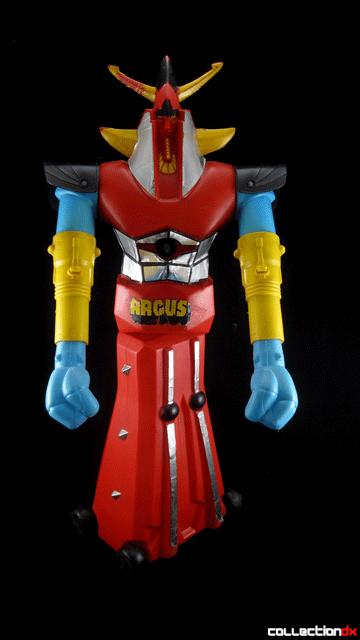 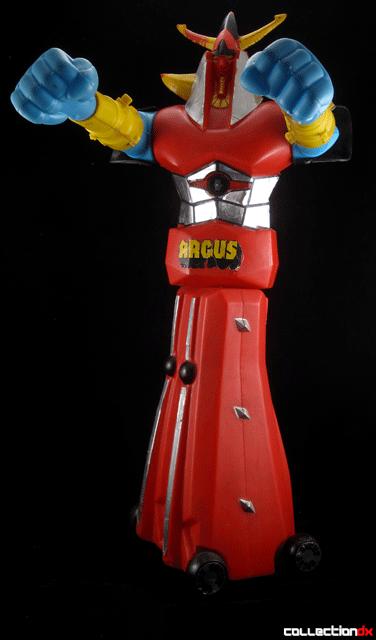 Argus is a really interesting piece. It first appeared on Ebay in late 2003 from a seller in France, despite the fact that the toy originates in Brazil. I really wanted to get that specimen, but after discussing the auction with a friend, I decided to let him go for it and he won it. I figured I would get the next one to appear. So I started waiting...

It would become pretty apparent that this toy was not easily obtained. For the longest time, the one specimen my friend got was the only one known to exist. (We discussed the toy a little bit in the second episode of Some Assembly Required.) Hunting down rare toys can be fun and can also lead you down paths that are unexpected or even a little convoluted at times. My first real chance to acquire this toy was one such occasion. As I was becoming more involved in collecting monster toys, I mentioned this toy to a fellow monster collector who was preparing to make a trip to Brazil in the summer of 2008 in conjunction with his appearance as a young Coffin Joe in the movie Encarnacao do Demonio. I honestly didn't think he'd even remember to ask about it since I was sure his trip would be focused on other things, but he not only did remember to ask a dealer friend he knew there, but he had a lead! Apparently his friend had a friend who owned the toy, but was traveling the Brazilian countryside at the time. Nearly two months of excruciating anticipation would follow while waiting to get word on whether or not I could purchase the toy. When the fellow ultimately returned, I was very disappointed to learn that, although he was not a collector himself, the toy he owned had sentimental value to him as it was a gift from his father and he was not willing to sell it. 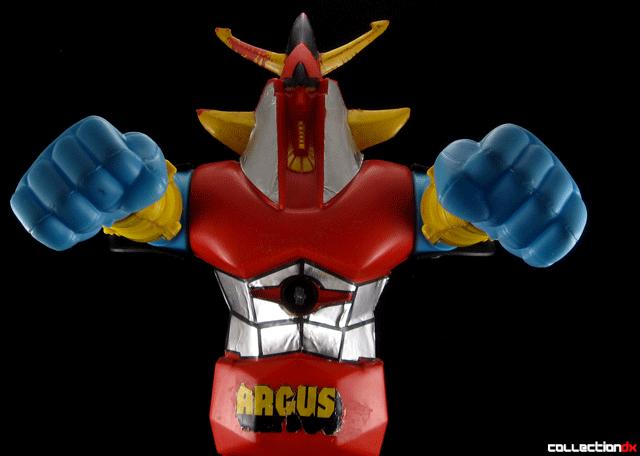 Then in late August of 2010, in the very late hours of the evening, I finally found another specimen. It was listed on a Brazilian site with a very affordable Buy It Now feature and I would need a middleman...quick! I sent out an email to a guy I knew who had helped me get some posters from Brazil before. I hadn't dealt with him in a couple of years so I could only hope that his email was still valid and that he remembered me. Almost immediately, the auction ended and for awhile I heard nothing from my contact. After the initial excitement of finding the toy, I sank into despair thinking someone else bought it and that it had eluded me for a third time. Happily, about an hour later an email arrived in my inbox from my contact saying that he bought the toy for me! Let me tell you, that night was the biggest emotional roller coaster I may have ever had as a collector. The toy was mine and now all I had to do was...

Finally the toy arrived after nearly 7 years of searching and waiting. Inspecting the one I got in person, I noticed some flaws I could not see before and realized that although I had one, the one my friend got years before was in better condition. With only the second confirmed (I never did see a pic of the one the other guy said he had) specimen, I wasn't complaining, especially since it came with the box.

Just about everyone who sees this box says it makes them think of Fisher Price and I can't say I disagree. I also love how much it copies the classic Shogun Warrior boxes right down to the way it excitedly lists all the features, no matter how mundane. "NAO USA BATERIA! NAO USA ELECTRICIDADE!" 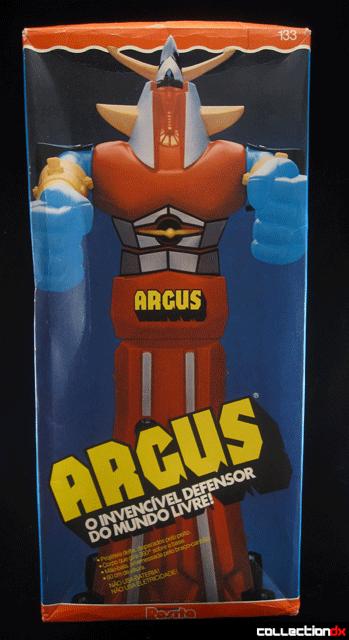 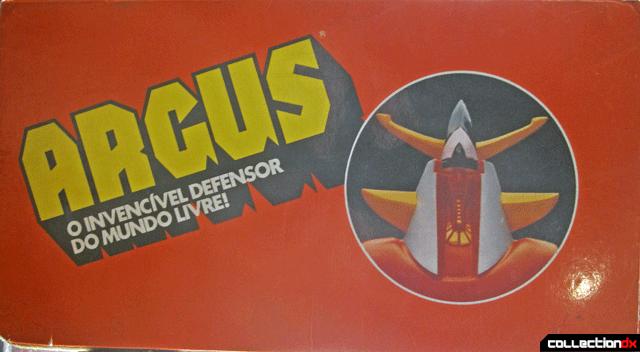 Some other notable features about the toy itself include the fact the the head and torso are all one blow molded piece. Every other Raydeen jumbo has a separate soft vinyl head. Of course, we know that blow molded polyethylene doesn't hold paint very well so you can see some scraped off of the horns of mine. The chromed silver stickers along the side of the face, however, look great. 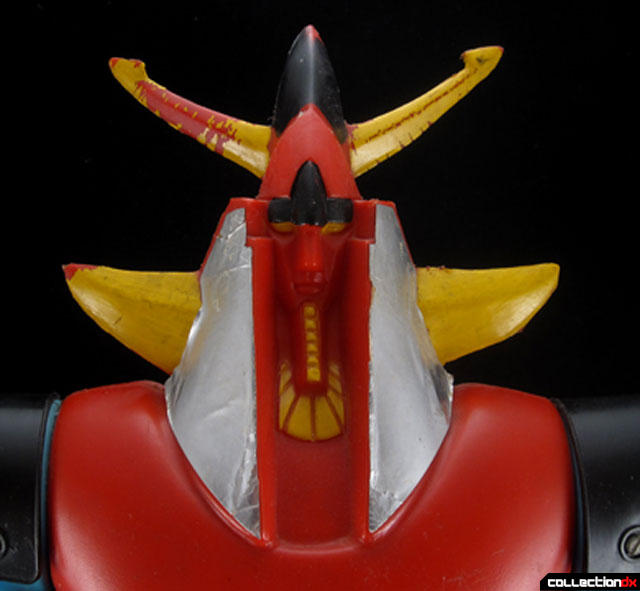 The classic sticker of the character name on the waist is also present. (Also, fwiw, I work with a guy from Brazil and he told me that this name would be pronounced more like "Ahg-hoos" than the "Ar-gus" way we pronounced it in the SAR video.) 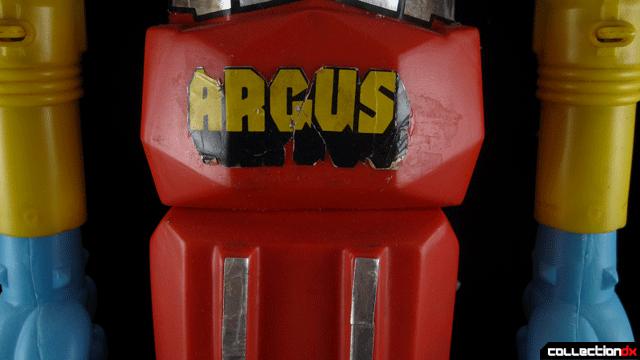 The makers of this toy went even further and added stickers to each wheel with the name on it.

Speaking of the makers, the toy was manufactured by a company called "Brinquedos Rosita". Believe it or not, this company is still in business today and seems to have graduated to making officially licensed products for major companies such as DC, Marvel, and Pixar, among others.

Anyway, in closing, it's a funky piece and really stands out. It's been a fun journey hunting this guy down and I'm pretty proud to be one of the few collectors to own one, but the story is not over. We still gotta find one for Josh!

Oh, one last thing! Eagle-eyed viewers may be able to spot a cameo of this toy (as well as the Popy Tetsujin 28) in this commercial. Can you see them?

8 comments posted
I remember when this was

I remember when this was found. I wanted one SO bad but I know I cannot compete with the deep pockets of Jumbo Collectors. I have to wait until the fifth, or sixth specimen to show up, and only then will I have a shot. Once the Italians, Chinese and a select few Americans get theirs, I may be able to get mine.

Unfortunately, due to the rarity of this that time may never come.

Truthfully, in cases like this, it's not always about the money. I'm sure you've probably paid more for new release gokin than I paid for this. Iirc, the actual sale price of this was about $125 (plus the double shipping and middle man fees). The real trick is finding it without a very public bidding war. Hard to do, but obviously possible.

Dave,
Well worth the wait as yours has a box, I wouldn't be surprised if its the only box in existence.

JB,
I know you'll get one eventually. If I find one I will be happy to sell it to only you!

Nice article and great to finally see some nice close up pictures of one.

Actually, so far both specimens I've actually seen of this have their boxes, much to my surprise. I fully expected to have to "settle" for a loose one if I ever found it, so getting it boxed was a pleasant surprise.

But I would really like to add it to my little collection of foreign Jumbos....If someone could help me, please send me a private message ;-)

I was looking for some kind of reference on the internet about this toy. It was the only toy I kept of all. Unfortunally, I didn´t find anything about it here, in Brasil.

Good to see that people of other countries know about it. It was my greatest toy of all. It´s in a very good condition, including the box.

I have no idea of how much this worth. The company Rosita is still running, but no longer produces this kind of toy.

Anyway, see the pictures make me call my mother to see if my Argus is still kept and well after all those years... :)

I live in Brazil and I've been lucky enough to own one of those Argus robots back in the day (either the late 70's or the early 80's). It was huge and very funny to play! Unfortunately, it was gone ages ago. :-(

I'm pretty sure I have a picture of my Argus somewhere. I'll find it and post it here!