In the world of classic Transformers, some toys are legendary. One of these figures is Decepticon Sixchanger, Sixshot. Known for his classy ninja looks and impressive array of alternate modes, Sixshot has been a fan favorite for many years, has received a re-issue, and even a few retools as Greatshot from Transformers Victory and Shadowmaru from J-Decker. This is not a review of Sixshot. On the Autobot side, there was another Sixchanger. He wasn't as big or even as stylish as Sixshot and for the most part, he was pretty much forgotten. This toy was Quickswitch. 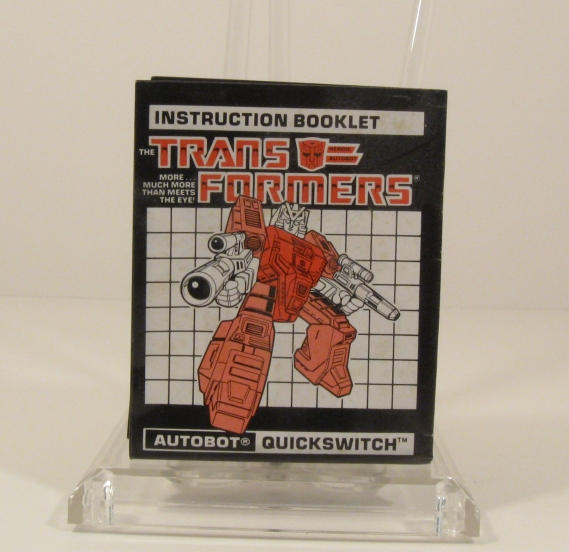 Like every classic Transformer, Quickswitch comes with a parent-confusing instruction manual. The best part of each manual is seeing how many names are used for a single piece of the toy. 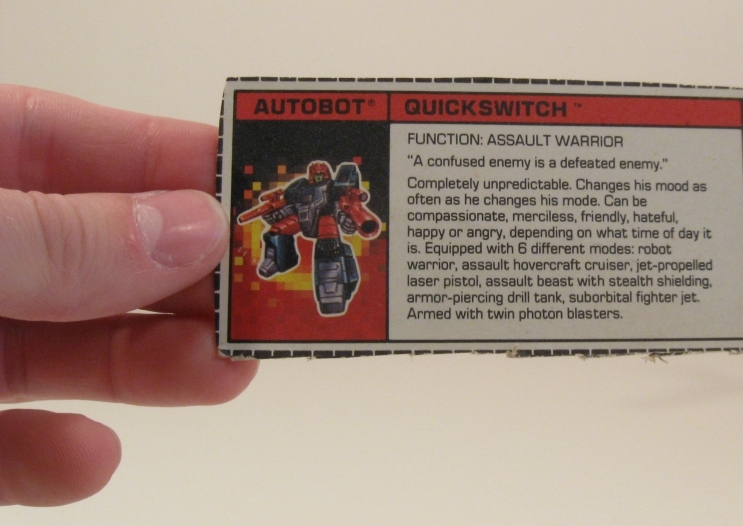 The figure I bought was a pristine example. It had no box, but it still had the whole tech spec. This is Hasbro's trademark feature for their major toylines. Its these little insights into the characters that keep people coming back to the same toys twenty years after the fact. Check out the elaborate names for each of Quickswitch's mode. Oddly enough, these names are not used within the instruction manual which opts for simpler names. For example, "assault beast with stealth shielding" becomes "flying puma." 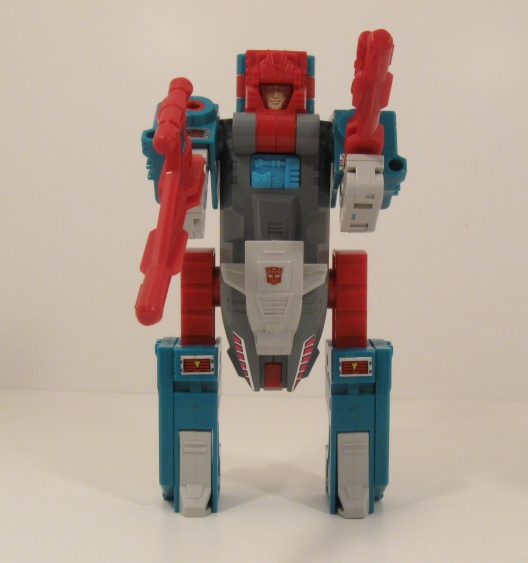 Taking a look at Quickswitch one can see he is rather plain. By this point in the Generation 1 toyline, the overall aesthetics had shifted completely to blocky sci-fi vehicles with equally blocky robots. Quickswitch's combination of red, white, teal, yellow, and gray is vaguely patriotic (made for a good guy) while not being particularly eye catching. He does have some sharp looking stickers chock full of mechanical detail which helps to break up the monotony of his design. From the front, you don't get any cues as to what exactly he'll transform into. The figure comes with two identical guns. 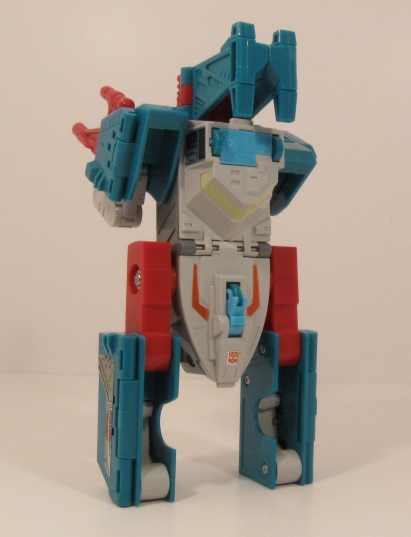 From the back, we see the only hint to Quickswitches six modes is the top side of a boat. You can also see the retractable nose wheel and two wheels on the roof of the boat's cabin. 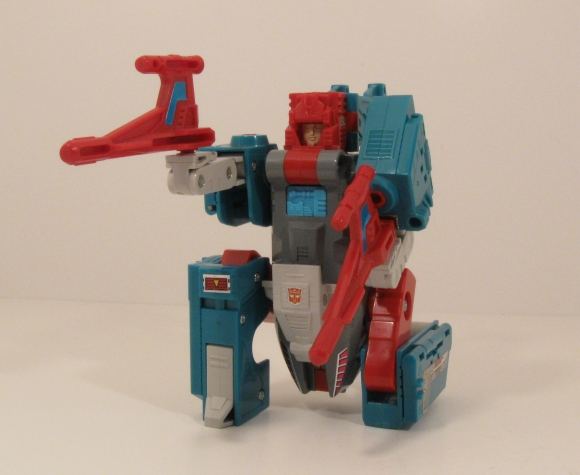 One plus side to Quickswitch's transformations is his articulation. People worship Sixshot, but frankly he's a total brick in robot mode. Quickswitch's plethora of ratcheted joints lets him endeavor in basic poses like kneeling. 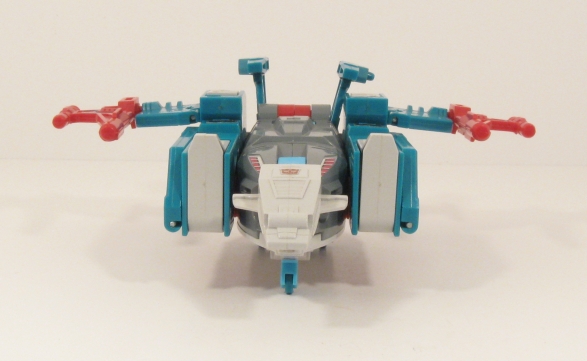 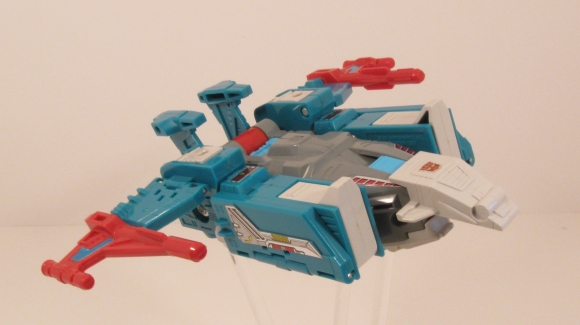 Practically every mode for Quickswitch is merely a repositioning of his limbs into different positions. For a sci-fi jet, Quickswitch looks alright. The combination of his arm panels and blasters make for passable wings and the two panels on his head make for okay tail fins. 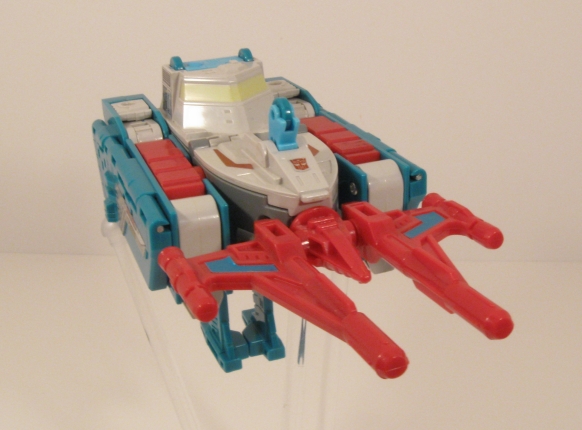 The flying laser pistol mode is the toy's simplest mode and also the most bizarre. In this form, Quickswitch is practically in boat mode with two guns sticking out of the front. The weird thing for me is that Quickswitch's Japanese counterpart, Sixknight is introduced in Transformers: Masterforce using this mode. What unfolds is a dynamic sequence involving Sixknight dogfighting a few jet fighters while in gun mode. 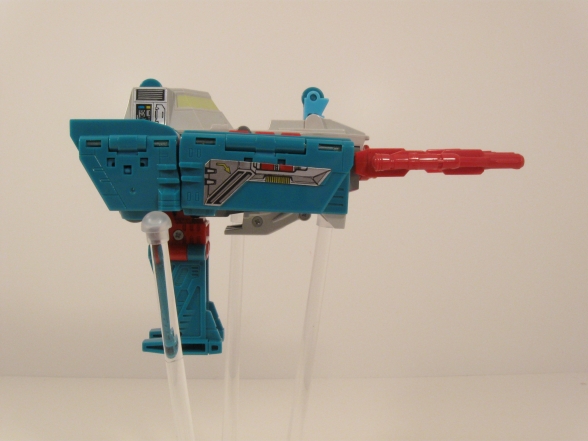 As a toy gun, Quickswitch is sized for small hands. I could only wrap my pointer and middle finger around the "handle." The front wheel is meant to act as a gunsight. 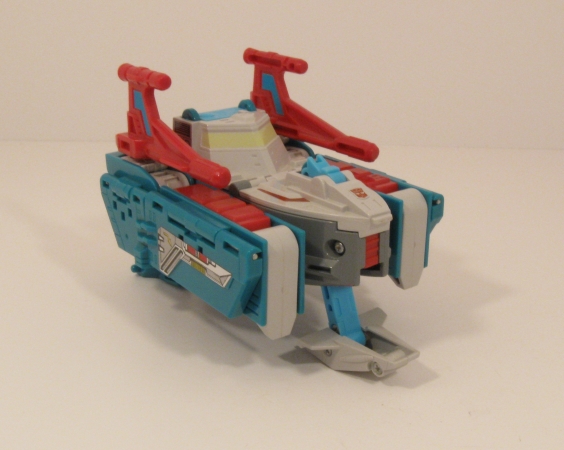 Hydrofoil mode is Quickswitch's most complete looking form in my opinion. The boat part meshes well with the rest of the figure while the twin blasters make the vehicle look like a cool attack boat. 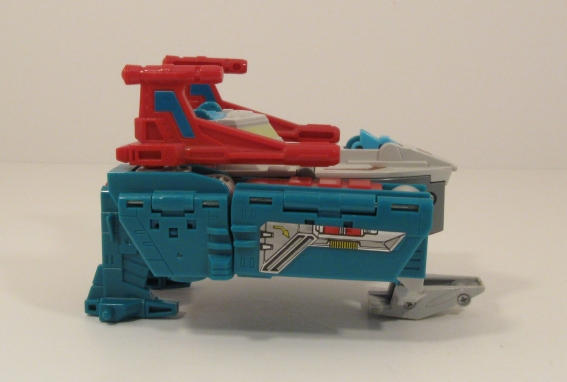 The only real problem with this mode is that Quickswitch has no wheels to roll around on. Despite the weird tripod skis, he is quite stable. I have not attempted to see if the toy will float like this and I'm not going to try it with those paper stickers. 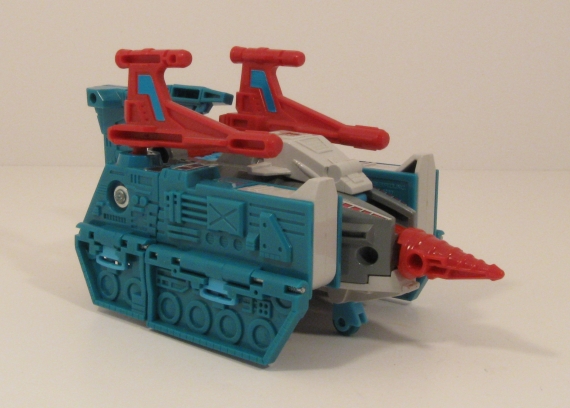 Turning the hydrofoil over and flipping out a few panels converts Quickswitch into drill tank mode. There is actually quite a lot of detail under those panels. The treads are not functional but Quickswitch rolls around using his jet mode landing wheels. As you can see, the drill bit is the mounting point for the blasters in flying gun mode. 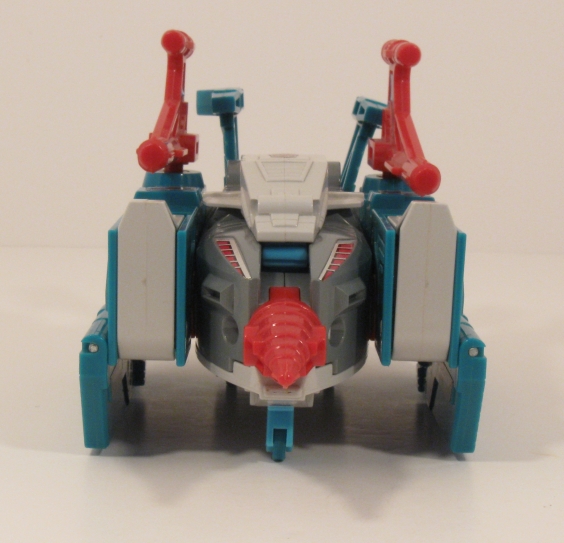 Sadly, the size of Quickswitch's drill makes him one of the least threatening looking drill tanks. Even Technobot Nosecone blows him away. 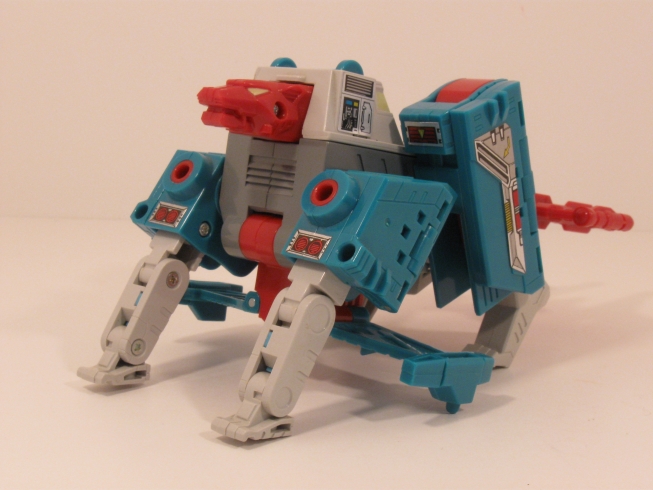 I have saved the most elaborate mode for last. As a "flying puma" Quickswitch reveals a few more hidden parts such as the paws on his haunches and the puma head. His "wings" are simply his head fins tucked under the belly of the assault beast. 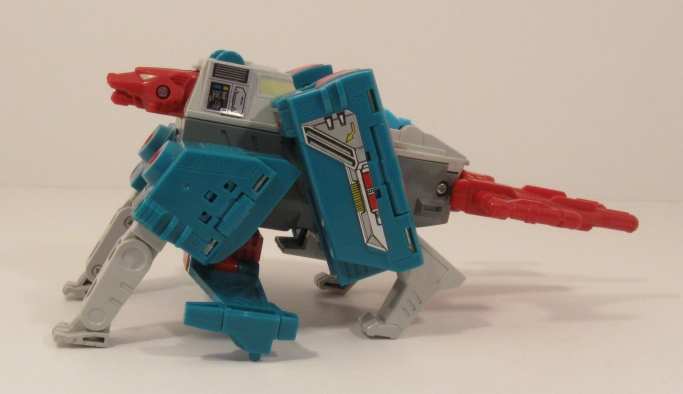 Oh the majestic puma. Quickswitch is a forgotten entry in the Transformers toyline. He has barely any media exposure outside of a commercial and one issue of the UK Marvel comics. While overshadowed by the arguably more impressive Sixshot, Quickswitch is still a fine toy in his own right. A few of his mode can feel same-y, what he does do is done well and the satisfying "click-click" of his joints make him a fun toy to mess around with. If you can find one for a reasonable price, I'd say go for it. At the very least check out the adventures of Sixknight, who really does the design justice in animated form.

This guy really reminds me of Seven Changer from Brave Fighters of Legend Da Garn...

If Quickswitch is the penultimate, who is the ultimate? Sixshot?

Penultimate means "next-to-final", as Quickswitch/Sixknight was the last new 4-or-more-modes robot design manufactured by Takara before the jump to the Brave series. While Shadowmaru was the last more-than-3-modes robot, the last brand-new model was Seven Changer from Da Garn, who, as the name implies, could change into 7 different forms, including robot mode.

Yeah that was the idea. Sixshot was actually billed as "THE ULTIMATE TRANSFORMERS CHALLENGE" with a seal on the instruction manual to challenge kids to transform him with just the pictures on the box. Another weird thing is the commercial for Quickswitch says he's the son of Sixshot who is trying to stop his father.

Another fun fact, Sixknight is voiced by Sho Hayami better known as the voice of Maximilian Jenius.

Nice review, giving Quickswitch a fair shake. He's clearly inferior to Sixshot in transformations, but really is a solid toy in his own right, with better 'bot mode articulation than Sixshot!

I'm not generally a fan of the later G1 toys, but this guy is pretty interesting. The droopy drawers robot mode is pretty funny! Good to see vintage TF coverage, as always.

I really liked these later toys they we're a lot of cool designs had quite a few of 'em. Why did I give Springer and some of the Headmaster & Target Master toys to the Goodwill... for shame.

Posted by Lizardspock on 18 September, 2009 - 14:26
Two decades has softened my opinion on the subsequent waves

and it's nice to see an actual toy get some props on CDX.

I didn't like this guy for the longest time, but once I had a complete one, it changed the aesthetic a bit.

And the guns are not identical. There is a hollow part that designates a right and a left gun.

What do you think of the new Quickswitch?