Power Rangers Super Megaforce is the 20th anniversary season of Power Rangers and a direct sequel to Power Rangers Megaforce. It's also an adaptation of Pirate Taskforce Gokaiger, the 35th anniversary of the Super Sentai series (well technically it didn't become Super Sentai until they got giant robots, but if Japan wants to start counting at Goranger, that's fine by me!) Because Super Megaforce and Gokaiger were both anniversary shows, the current Power Rangers have the ability to access the powers of Rangers from years gone by in the form of little figures that transform into keys that unlock powers. It's also about space pirates because space pirates are awesome.

The sixth Ranger Orion, the Super Megaforce Silver Ranger, acquires the powers of the original Mighty Morphin Green Ranger, the Time Force Quantum Ranger, and the Dino Thunder White Dino Ranger. This allows him to access the Q-Rex Zord, known in Japan as Gojyujin, which has three modes: 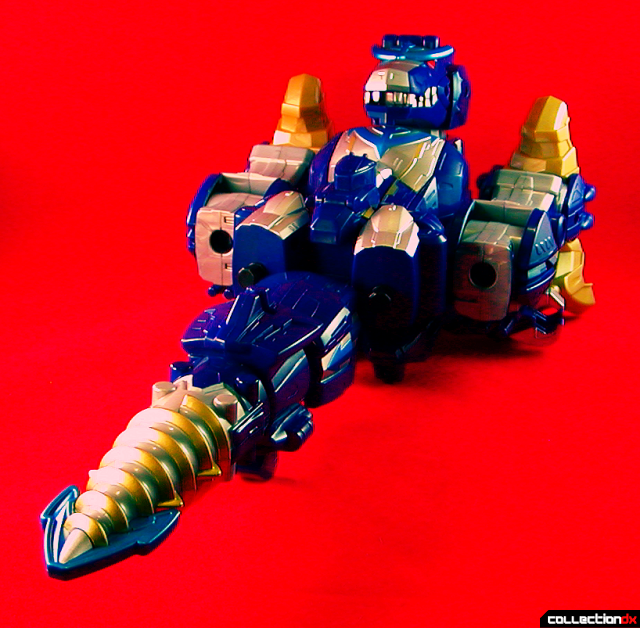 This mode is meant to represent the Quantasaurus Rex (or Q-Rex for short) from Power Rangers Time Force. This seems pretty weird to me, though, because the Quantasaurus Rex had a tubby dinosaur mode and a robot with huge shoulders mode and not a weird tail spaceship mode. Whatever you say, guys. 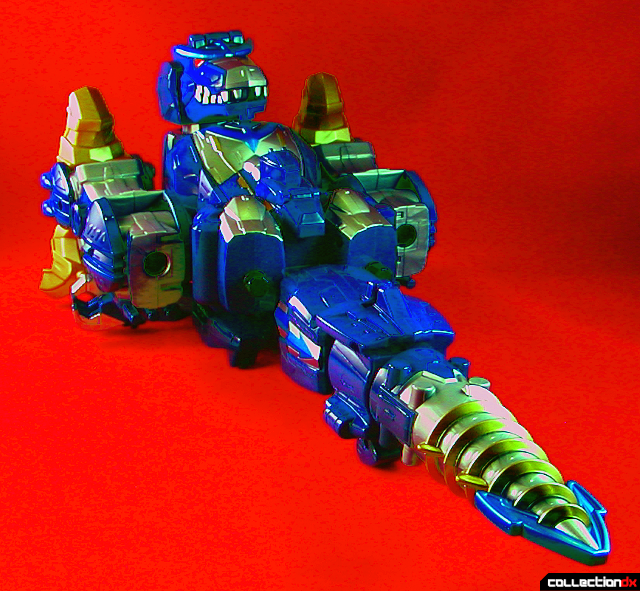 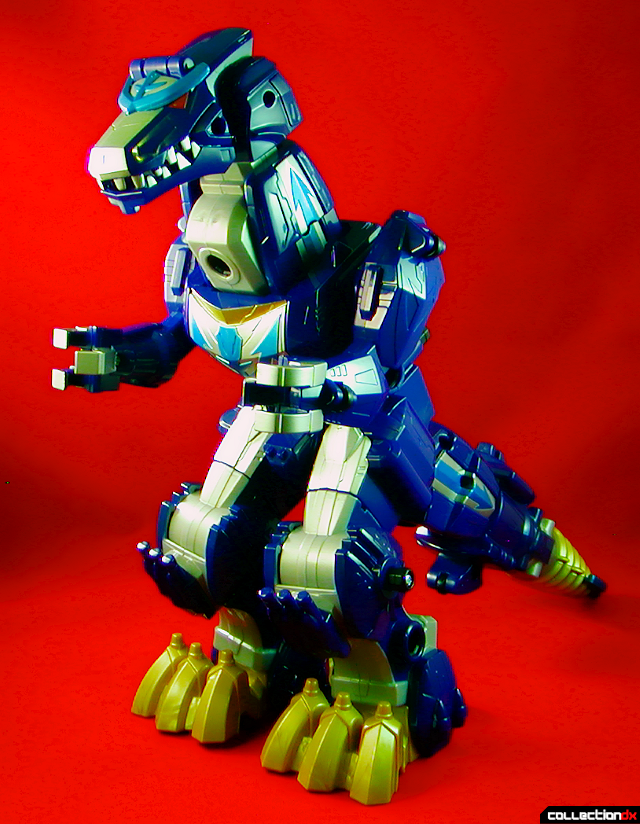 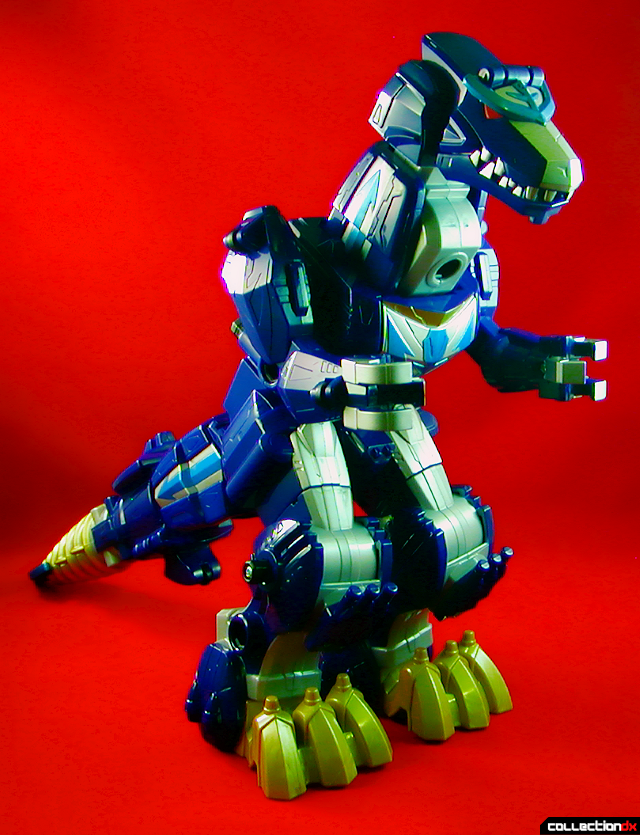 Articulation is about par for course for Power Rangers Megazords, which is to say not that impressive but perfectly functional. I am super glad that the dinosaur can open its mouth, but it is kind of hilarious that there's a fist in there. 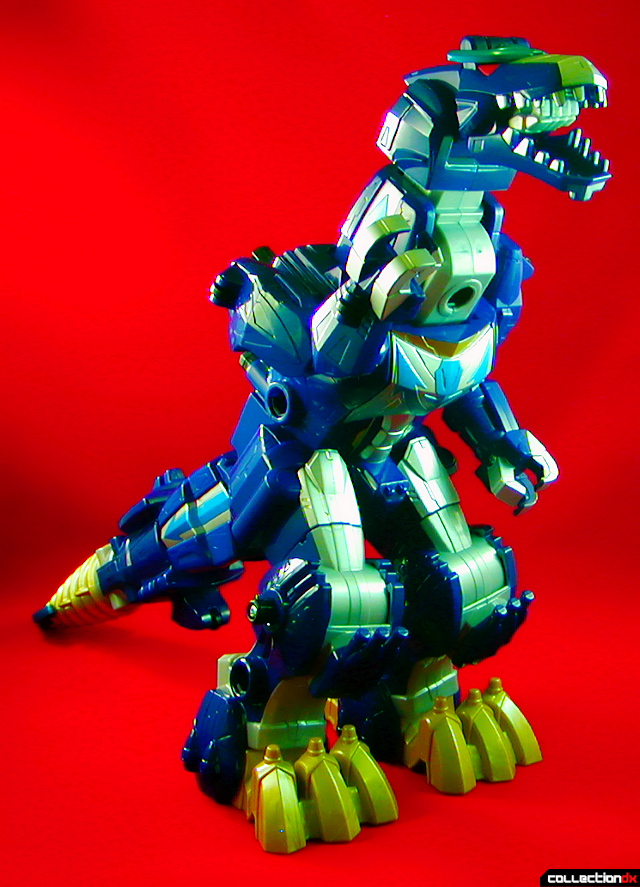 I was a little surprised that the head can raise and lower. 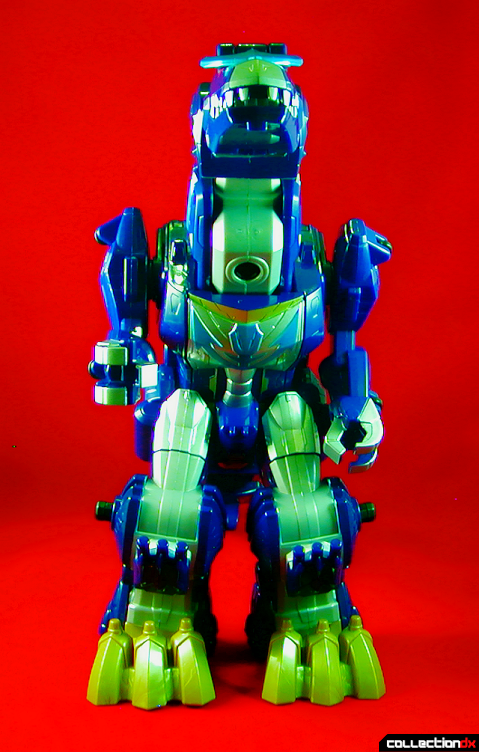 Of course this dinosaur has a huge hole in his neck due to the Zord Builder joints. 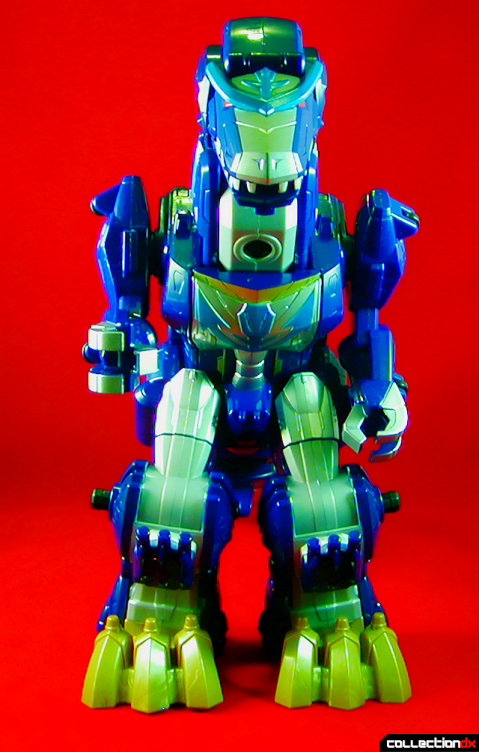 If you want, though, you can rip off the dinosaur's head and reattach at the back of the neck and make it even longer for a nice giraffeosaurus looking thing. 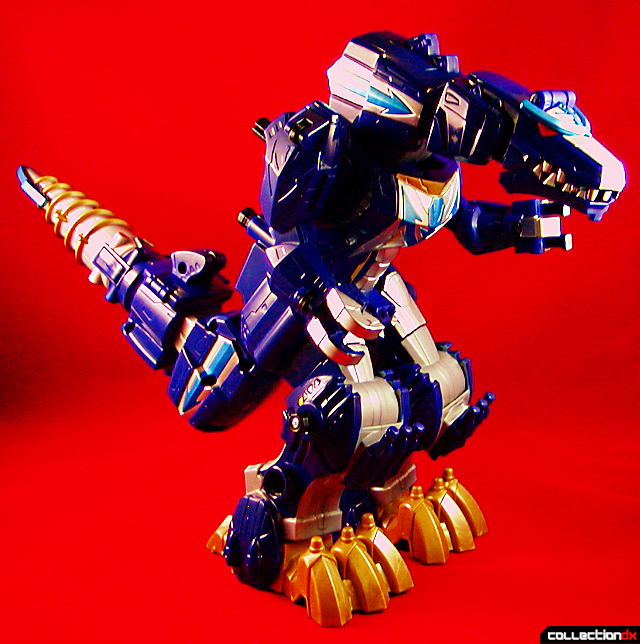 The robot mode is ostensibly based on the Dino Thunder Megazord and for once this actually is pretty fitting, since the original was a dinosaur based robot with a tail as a drill for an arm. Of course, it doesn't really make sense to associate the White Dino Ranger from Dino Thunder with the Dino Thunder Megazord, considering he was almost never inside of it and usually used the Dino Stegazord, a completely different robot. 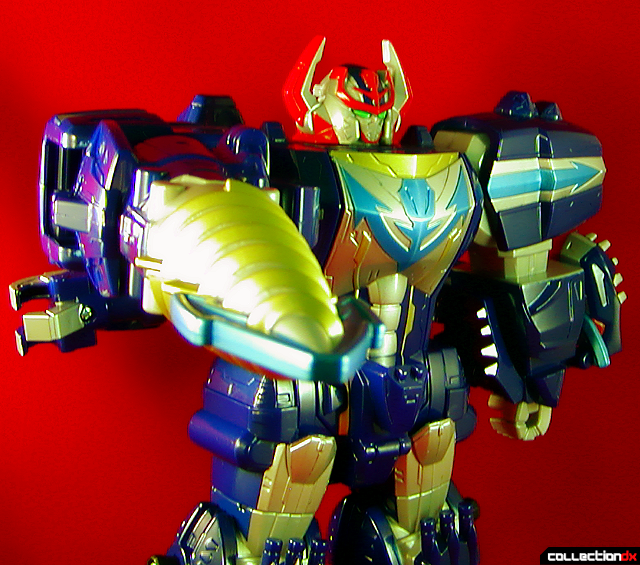 The tail spin gimmick is still intact in this mode, for all it is worth. 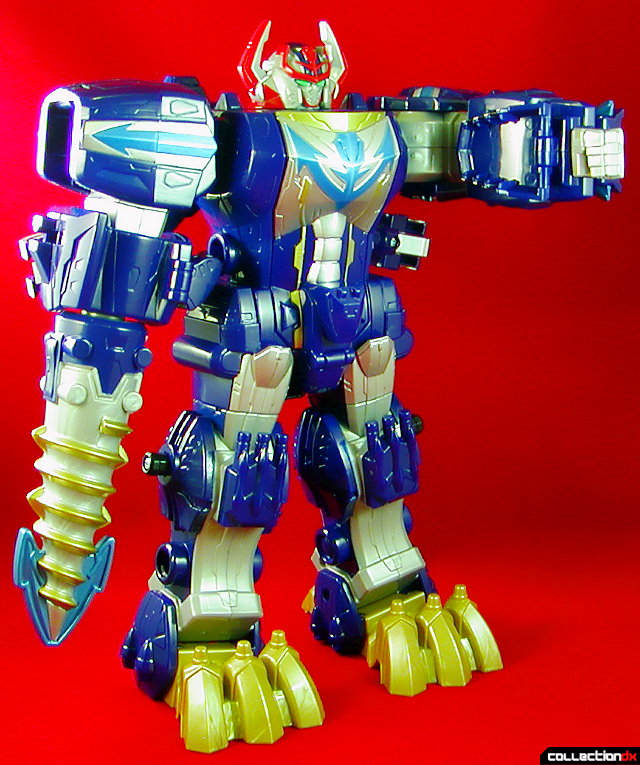 As before, articulation is fairly limited in typical Power Rangers fashion. 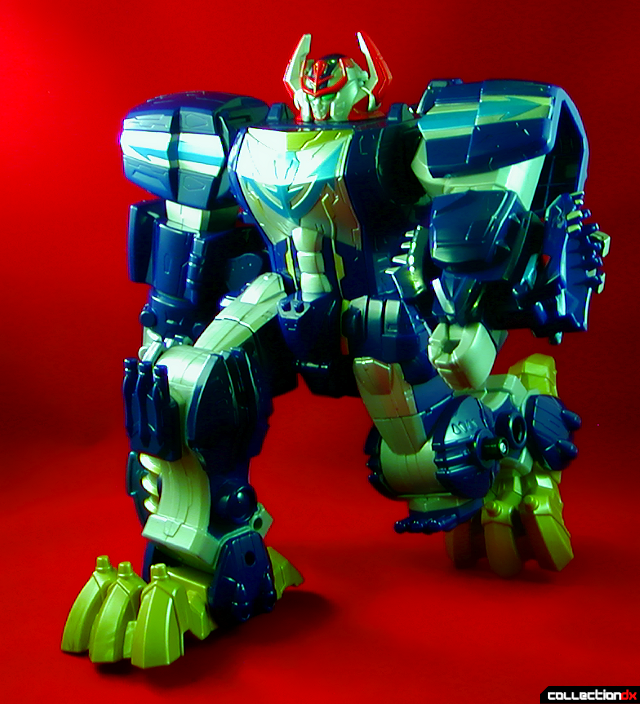 Also worth mentioning is that unlike the Japanese Gojyujin toy, you don't really transform the Q-Rex Megazord between modes so much as you rip off its arms, legs, and head, and put them on again in different places. 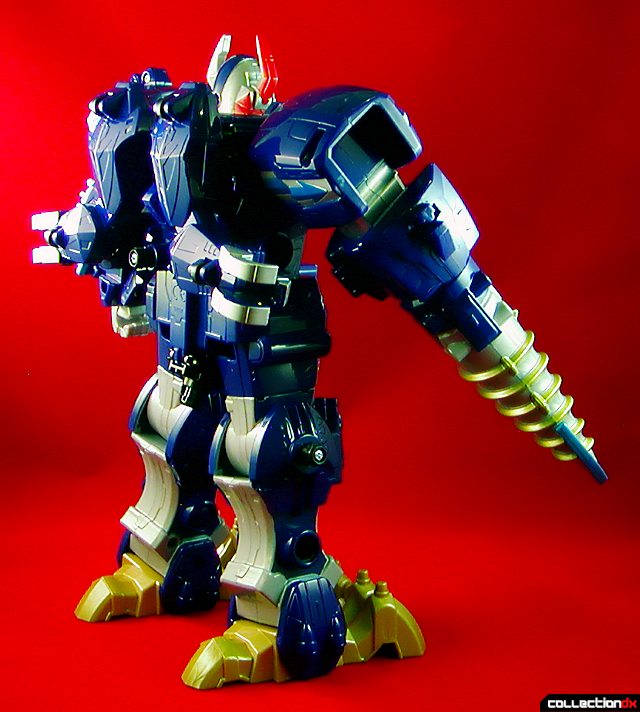 You can plainly see how I have attached the stumpy dinosaur forelegs to the back, but you could plug them onto other pegs if you wanted. 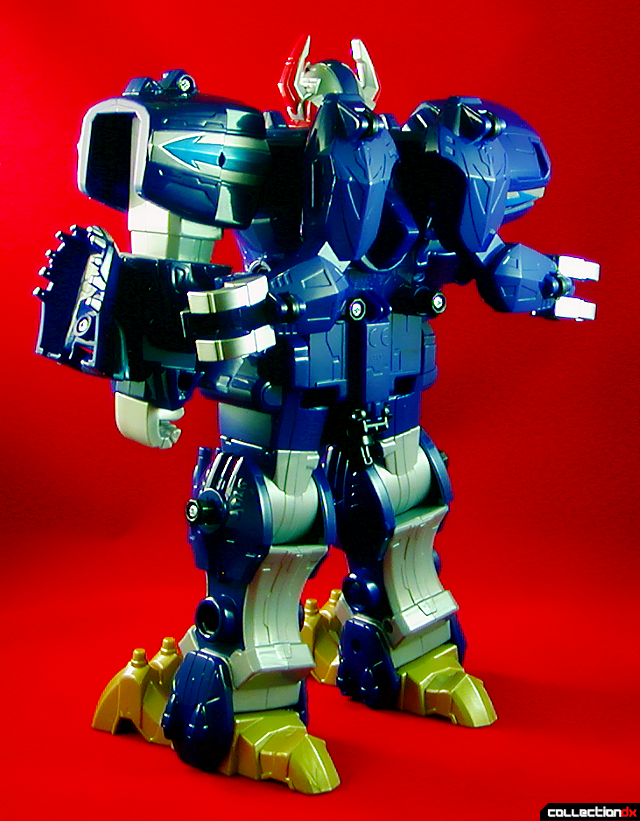 One of the big advantages of the Zord Builder system that this and most recent Megazords is that they are cross compatible. 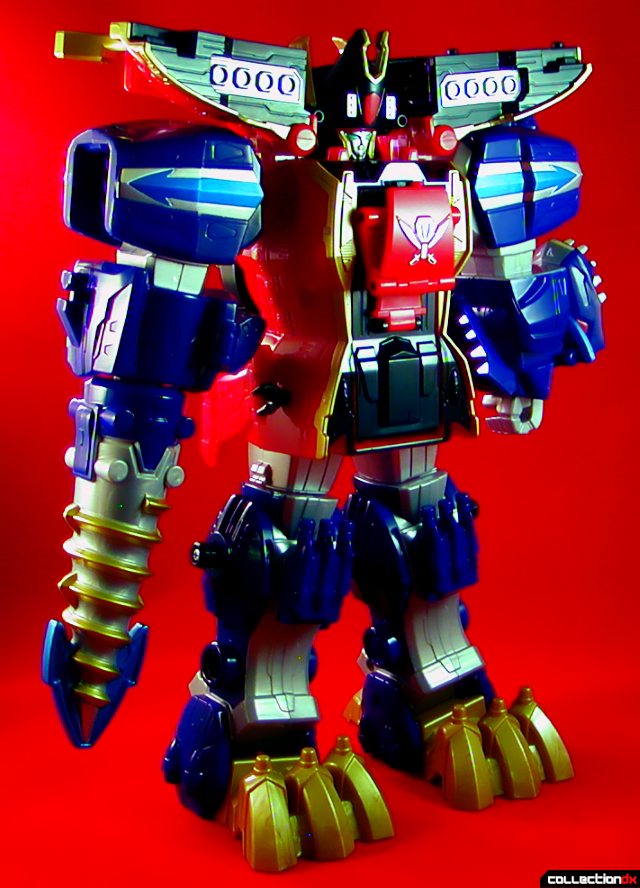 Here you can see the arms and legs from the Q-Rex Megazord on the Legendary Megazord's core. 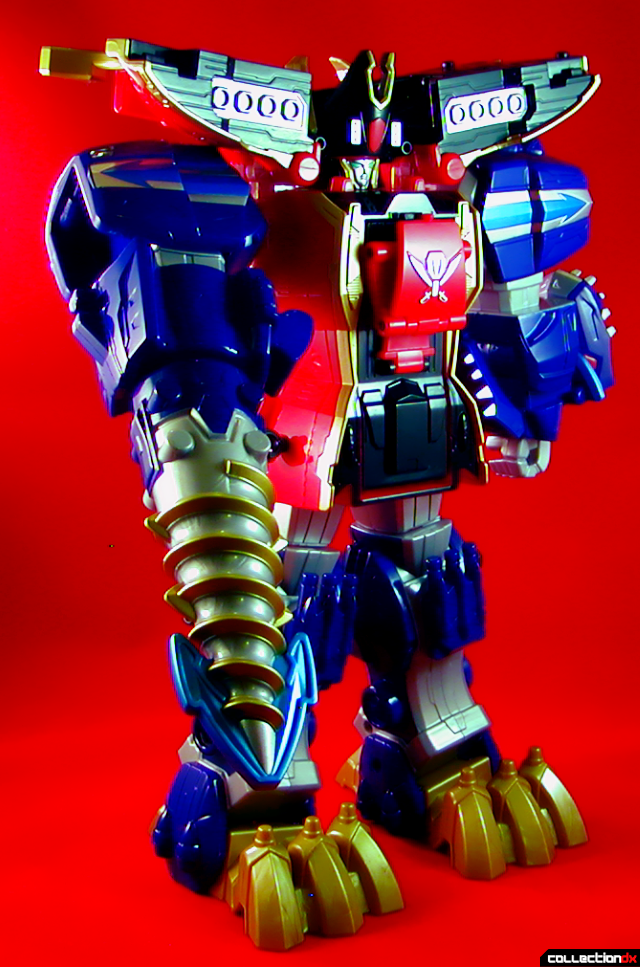 While the drill gimmick still works, please be aware that the big giant shoulder bag things from the Legendary Megazord do impede arm movement. 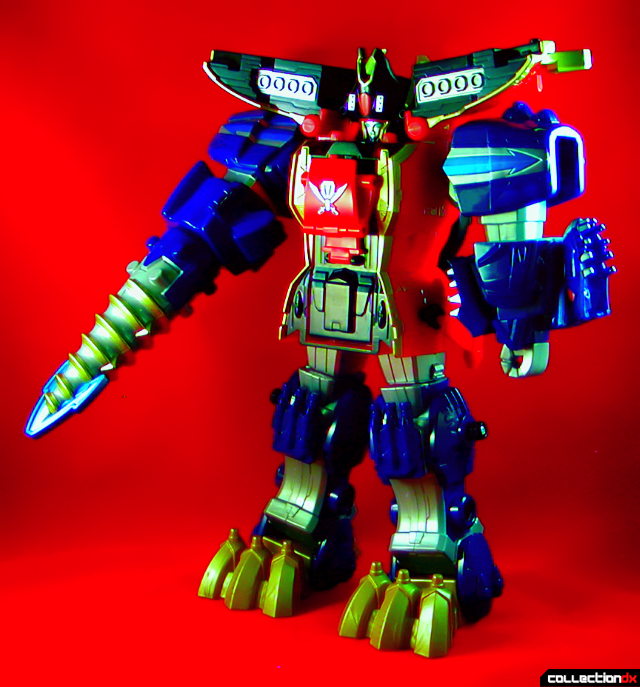 The peg size for the Legendary Megazord's sword is the same as the Q-Rex Megazord's fist. 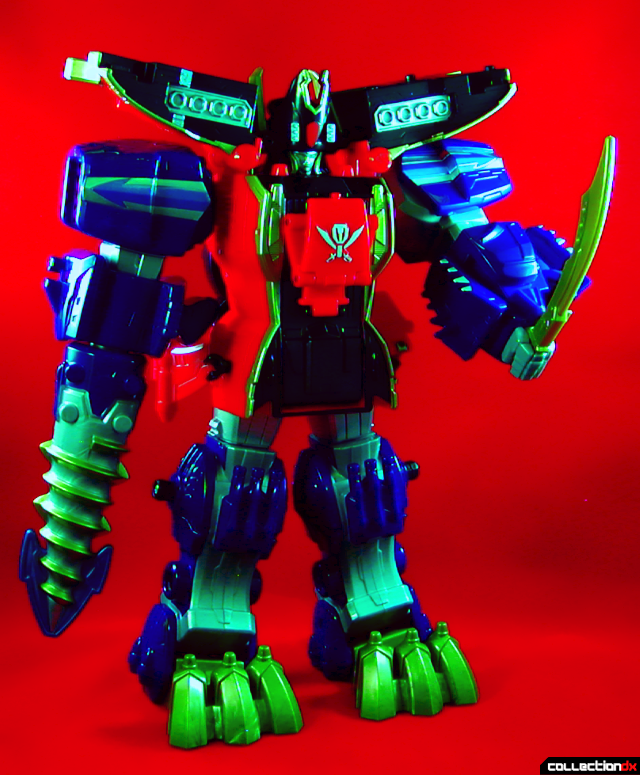 You can also utilize the scabbard but the clearance is a little tight. 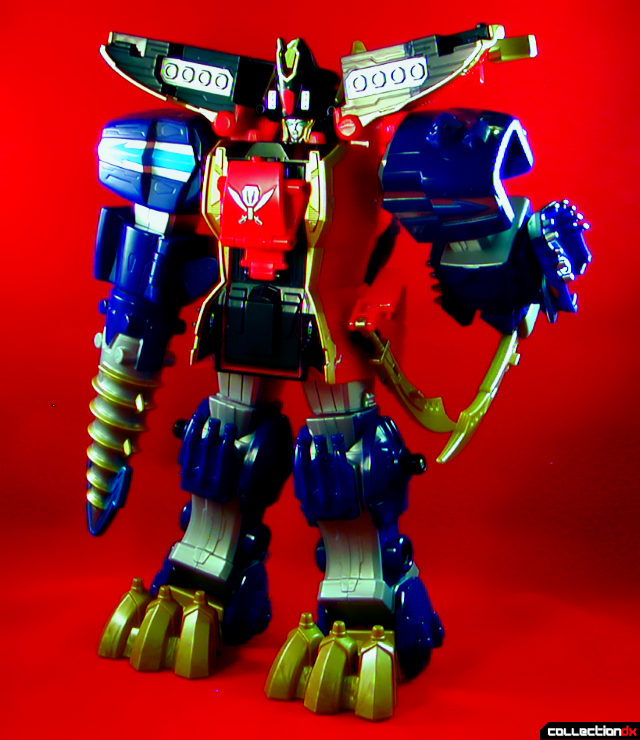 Here you can see the Legendary Megazord's arms and legs on the Q-Rex Megazord core. 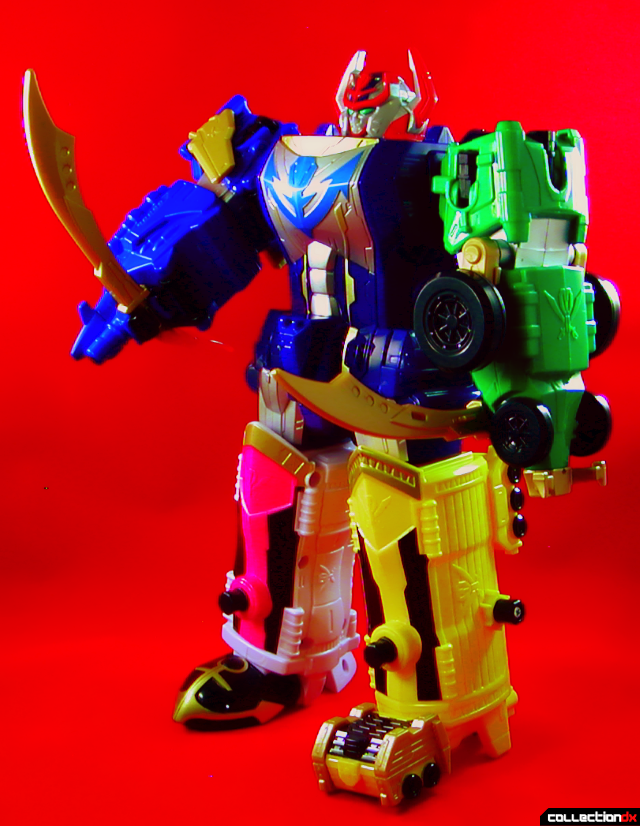 I have to say, this color combination does not work nearly as well! 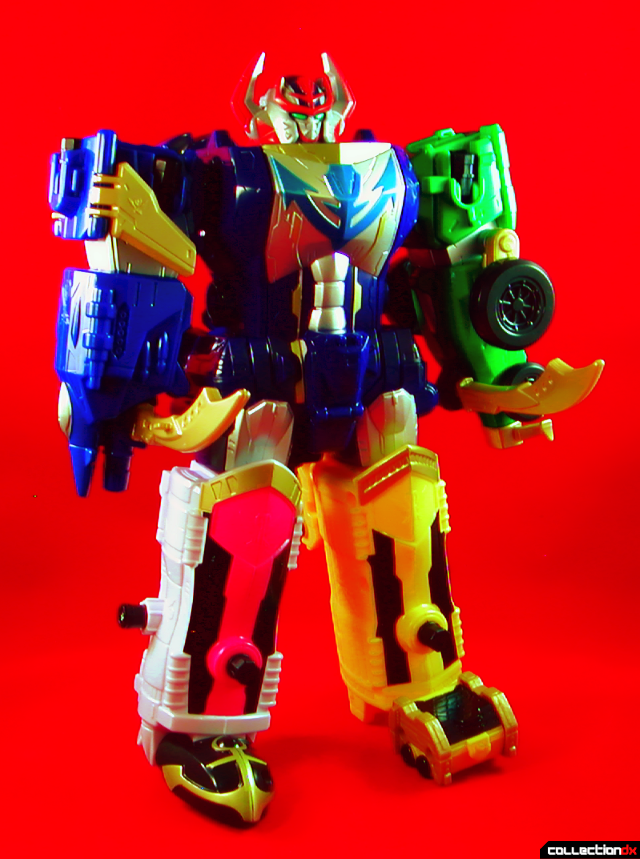 It is nice that you have access to two hands instead of just one with this set of arms, though.

Probably one of my favorite Zord Builder combinations is the Q-Rex Megazord arms and legs on the Legacy Dragonzord core. Also, never shoot on a red background. 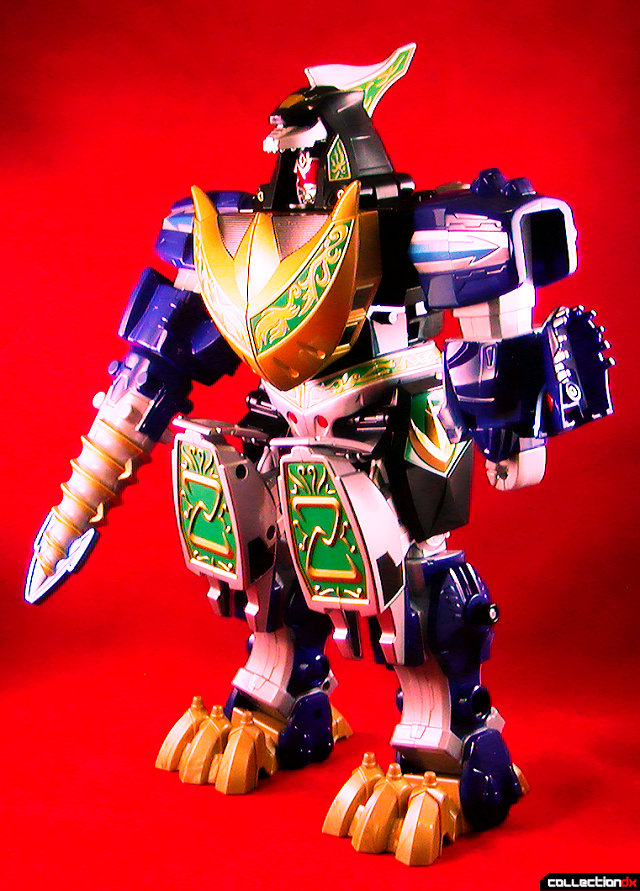 All of this is true, but I still think the Q-Rex Megazord looks pretty nice on its own. The paint that is there is quite good and while it it no way compares to the hefty diecast in the Legacy Dragonzord, at least the plastic is thicker than on the Legendary Megazord and I think the more unified color scheme is a lot prettier. 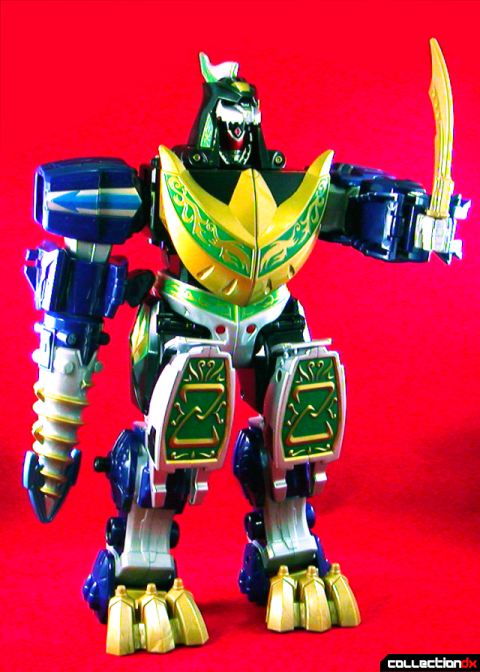 I also really, really love the fun combination possibilities that the Zord Builder system brings to the Megazords and I am 100% willing to give up some features and size to have that compatibility. Sure, I would prefer the superior paint job and diecast metal of the Legacy toys, but the Q-Rex Megazord is a much cheaper toy for the children's line, not an expensive collector's item. It's true that it's a little stripped down from Gojyujin, but to my eyes, it's still a fun, worthwhile toy that looks really cool and it's a blast to swap parts with your other Megazords.

The die-cast parts on the Legacy Dragonzord were a stupid idea that just serve to cause balance problems. Note to Bandai: Learn from your competitor Hasbro's screwups! Do not listen to the "WAAAA! WAAAA! WE WANT DIECAST BCUZ IT AUTOMATICALLY=BETTR" crowd!