While I kind of dug the vehicles from Tron Legacy, I was hesitant about the figures. I heard bad things about the quality, and some of the sculpts were really awful. Despite this I decided to give a few a try. I stuck with figures whose faces I could not see due to the horrid sculpts on Flynn and Sam.

This figure here is Rinzler. I think he’s one of CLU’s henchmen, but his true identity is hinted to by the decoration on his chest. I’ll say no more about that.

The package is attractive, with a Try Me feature activated by pulling the tab from the package. The figure lights up when pressed. 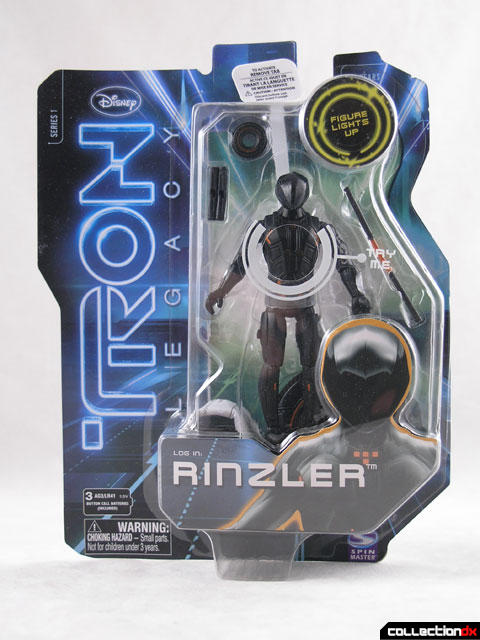 When you first remove the figure from the package, the lack of QC is immediately apparent. My figure had leftover flash and sprue from the mold on the arm section. For the purposes of this review, I trimmed it off with a hobby knife. 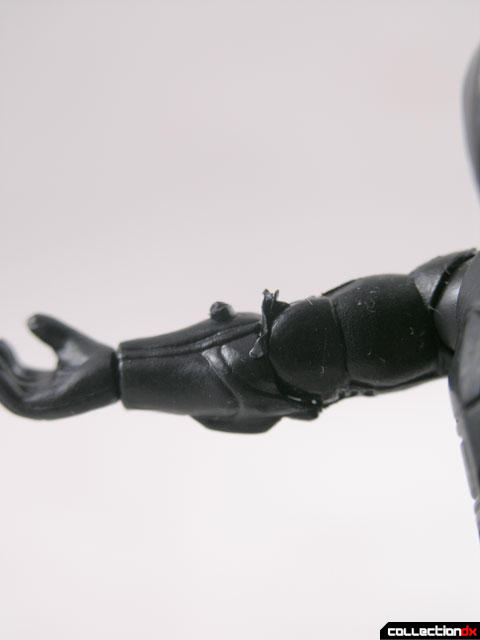 Within minutes of opening the figure, I broke it. I tried to turn the head, but it just snapped off. Super Glue to the rescue. 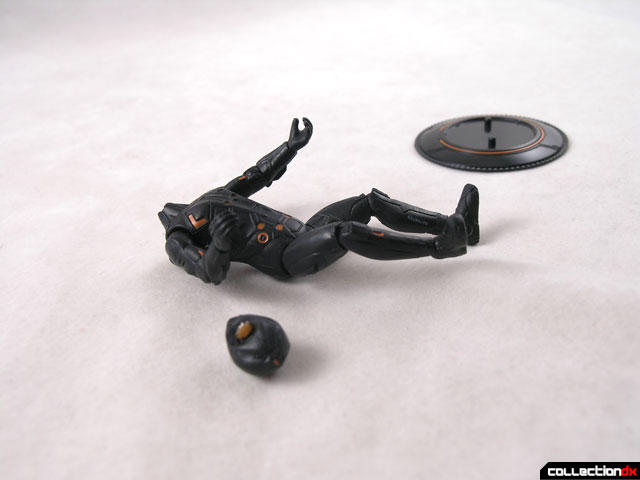 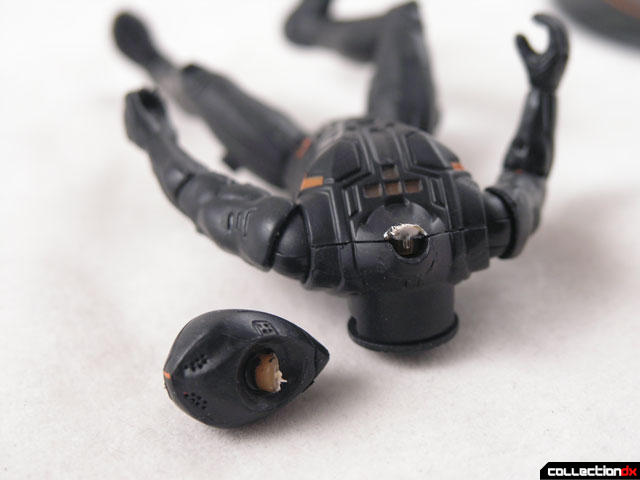 Rinzler has articulation in all the right places, but none of it is implemented properly. The shoulders are ball joints, the elbows swivel and bend, the wrists turn. There’s no waist joint due to the light up feature. 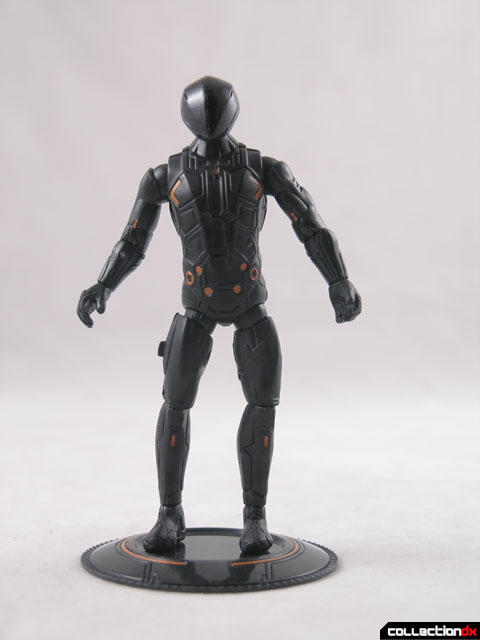 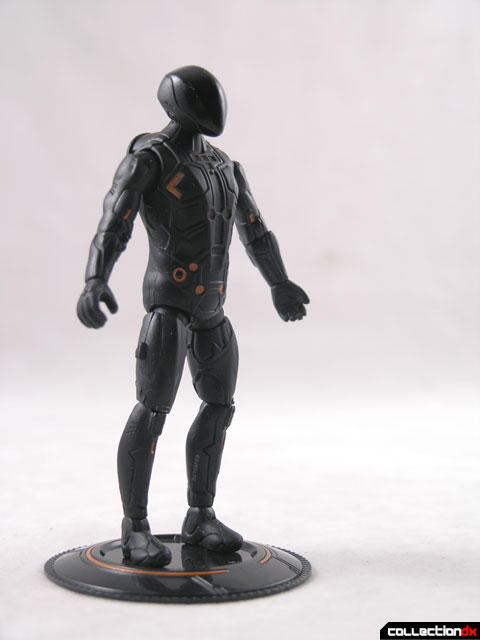 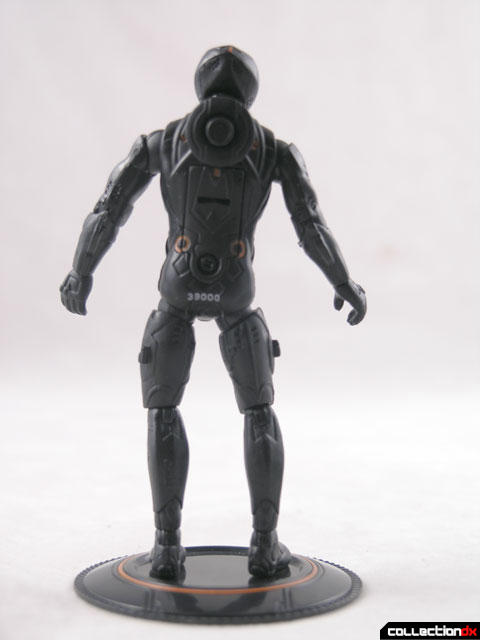 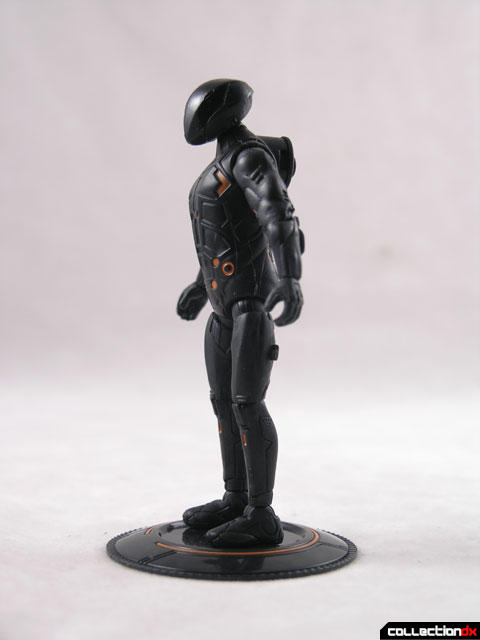 The legs have the ball and swivel hip joints that are all the rage these days, but are executed in such a way that they have a really limited range of motion. There’s no crouching or kneeling to be had here. Knees are swivel and hinge, ankles are swivel and hinge. Detail on the limbs is soft and muddy. 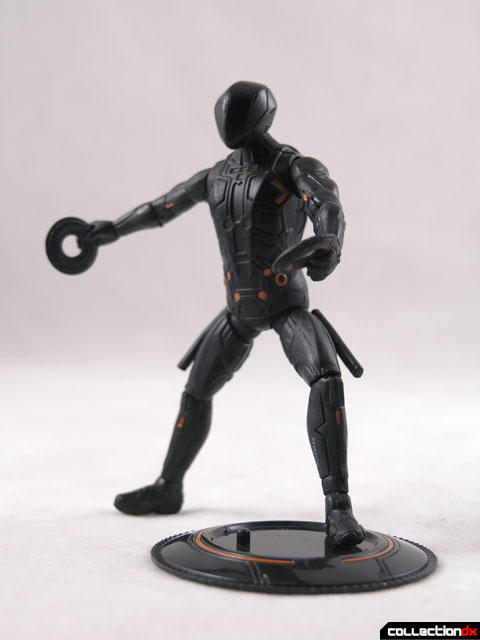 The body is nice and sharply detailed with the cool light up feature. However, the inclusion of the feature makes the figure look chubby. You can see the large protrusion on the back where the batteries and button are – it looks awful. 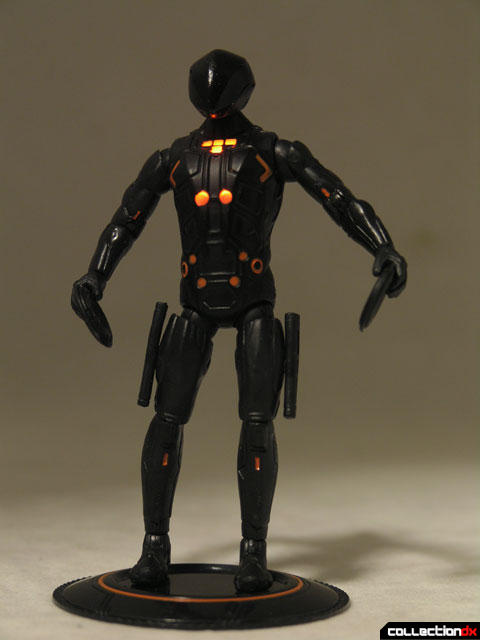 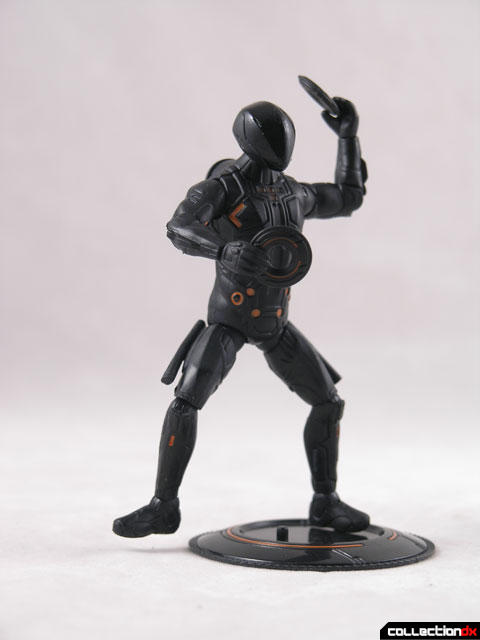 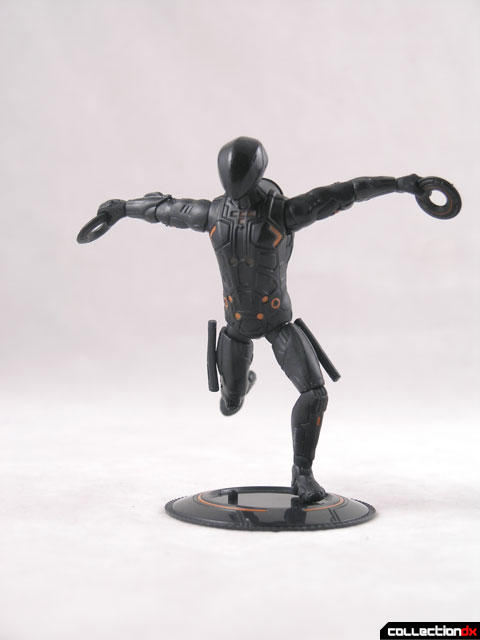 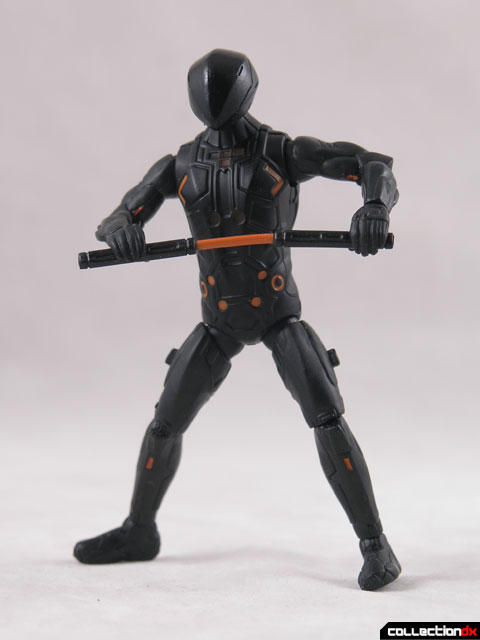 Also included is a display stand.

I feel like there was a lot of missed opportunity with this figure. I attribute this mostly to the manufacturer, Spin Master, who is not exactly known for their action figures. Compare this to a Hasbro Star Wars figure, and the difference is night and day. I applaud the ambition in trying to make some cool gimmicks and accessories for the figure, but the toy was just too ambitious for a manufacturer without action figure experience. 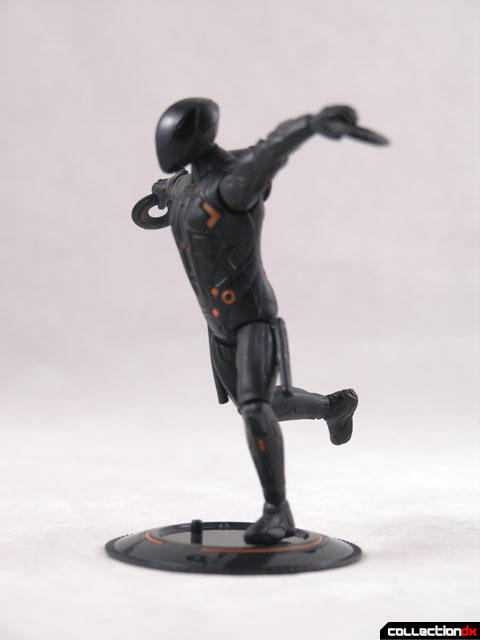 wow, im speechless and disappointed at the same time... not what I was expecting

Can you imagine how awesome these might have been if they were created by Takara-Tomy or Kaiyodo!

So, basically, what you're saying as this toy could have been awesome if only it didn't suck? ;p

I keep looking at these on the shelves. I always thought that they were tremendously bland, but I didn't realize they'd be brittle pieces of crap.

I actually like this figure, although I understand how frustrating it is to have them break right out of the package.

Maybe it is my own paranoia, but I always try to loosen up the joints on my figures (necks and wrists) by pulling on the head or hands before attempting to rotate the joint. So far it's worked great for me.

That's a shame. I really like the design of the character. Anyone doing a review of the deluxe version? I'd be interested it the sculpt and the figure fare any better.

I have one, I'll review it here: http://degeneratehobo.livejournal.com it's an open blog

That's a real shame. Hopefully Medicom can pick it up later as a Japan license for a new RAH 100 series. :D

They should re-issue those... just in a better plastic this time.

I had that set (and paid a pretty penny for it too) - and Tron's arm broke within ten seconds out of the box, same as this figure above.

......This decade is almost over and I forgot to say something important in this website since it's major upgrade. That being said, I'm not gonna get this toy. Thanks for sharing Josh...I'm gonna post another message to you all...I got something important to say.

I got the rinzler figure too..though quite not what i expected...its still ok by my book...It does seem hard to fit on the deluxe light runner...Poseability is 3 out of 5 for me..But the light gimmick is 4.5 of 5. Hope you guys could post a review on the deluxe light cycle...im planning to get that next...

Oh man that sucks.... Mine are all really high quality (luck?) No sprue remains or anything like that. I suppose my luck with the joints comes from collecting Predators and Transformers, I can get Rinzler into some pretty distinct poses (it takes work yes), kneeling is possible but difficult and with a bit of rotation his hips have a decent range of movement, although I agree it's awkward at best.

His arms, legs, and butt seem to have the least detail but they're still not terrible, the fact that his feet have clear detail is impressive. The lack of paint on his hands, and incorrect details on his torso (the circles on his hips belong on the back of his hips not the front, it's pretty decent for a 3 inch figure.

As for Kevin and Sam, yes a lot of the figures have so-so to poor sculpts and paintwork, but that's about on par with most Star Wars figures. Patience and being picky can really be rewarding.

I think the worst part is there could have been low-waist articulation even with the lights.

Poor articulation resides even more in the larger Rinzler figure, his head shifts slightly but that's all, and the range of motion in the legs is terrible, worse the the smaller figure. The upside to it is the amazing detail, even if again the rings on the front are incorrect.