The Punisher is the most recent in a series of Walgreens exclusive Marvel Legends releases. This particular version of The Punisher is from Jim Lee's run on "The Punisher: War Journal" and is an excellent likeness. The figures comes packaged in the standard Legends window box, Included with the figure are M60 machine gun, automatic shotgun, a rocket launcher, and an alternate head. No build a figure part is included with this release. 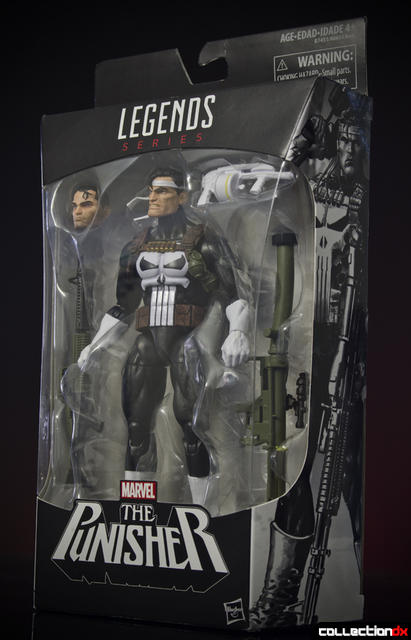 The Punisher stands 6 and 1/2 inches tall from toe to head. 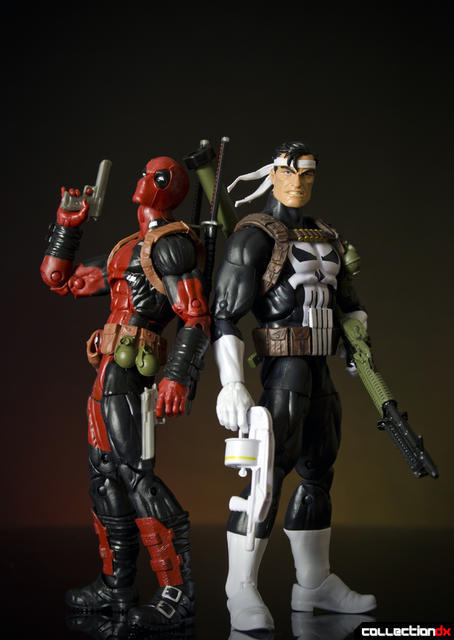 Paint applications are on par with recent Legends releases. For the most part, his white paint apps are clean and solid. The leather on his belt and harness has a nice dark wash that gives it a realistic look. There are a few spots here and there that are a little sloppy such as the bandanna, and his teeth, but you have too look very close to notice it. Additionally, his M60 and rocket launcher have some decent apps wich is nice, as generaly Hasbro does not include any paint apps on weapons. 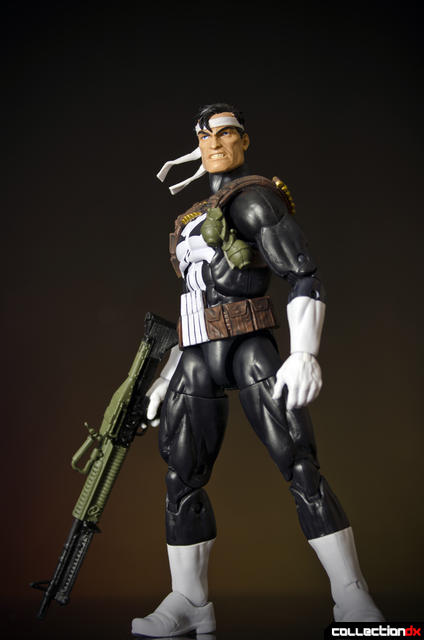 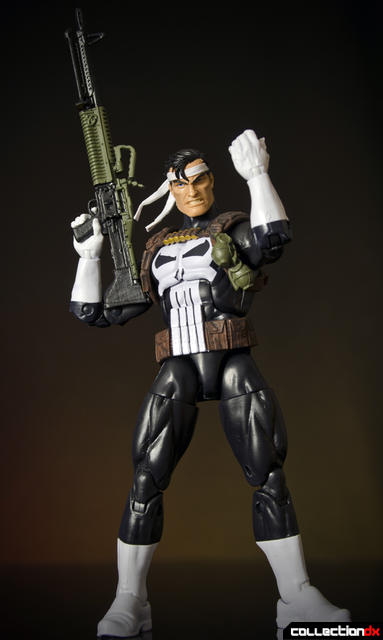 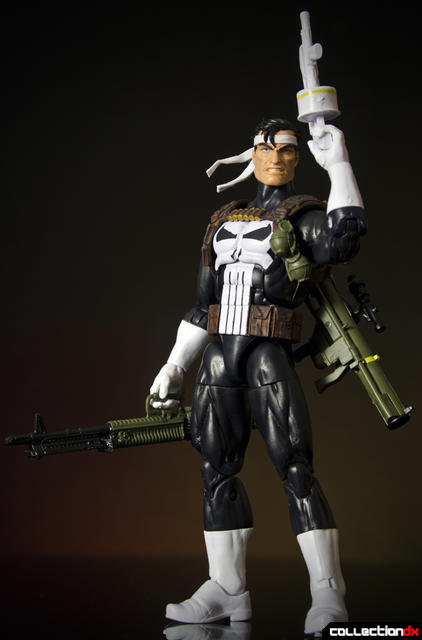 Often times hasbro will avoid including realistic looking weapons with figures, opting instead for generic sci-fi weapons or oddly colored weapons. I really like the M60 and rocket launcher that are included with this figure though, they look very realistic (for a legends) even down to the yellow "live munitions" stripe on the rocket launcher. 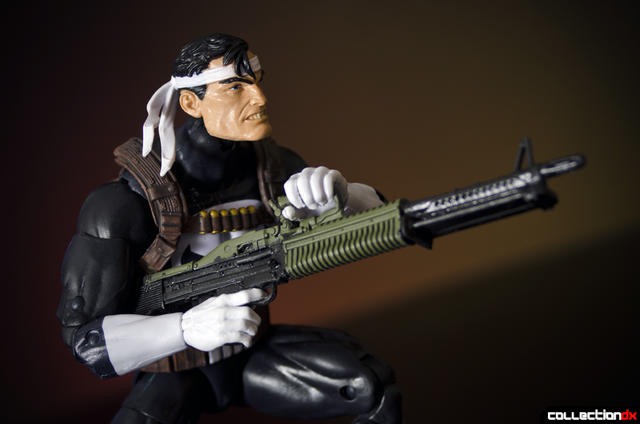 The alternate head looks more like The Punisher that you would see in recent media with stone wall expression and five o'clock shadow. 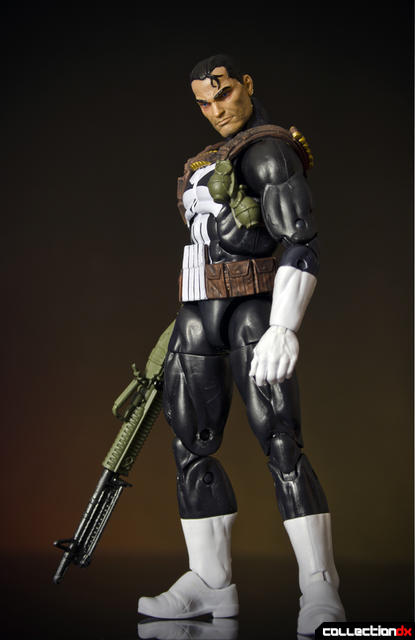 Articulation is about average for a Legends figure released in the past year. He has nice range in his hips, knees and elbows that allows for dynamic poses. His torso crunch is on a ratchet, and only has one forward and backward position (all the way in both directions.), not a big deal, but it would have been nice to get some range in between those stops. The only other place where articulation is an issue is the shoulders where his harness restricts his arms from laying flat against his sides, or from moving across his chest. This issue is particularly bad on his right side where the grenades molded onto his harness restrict movement even further. 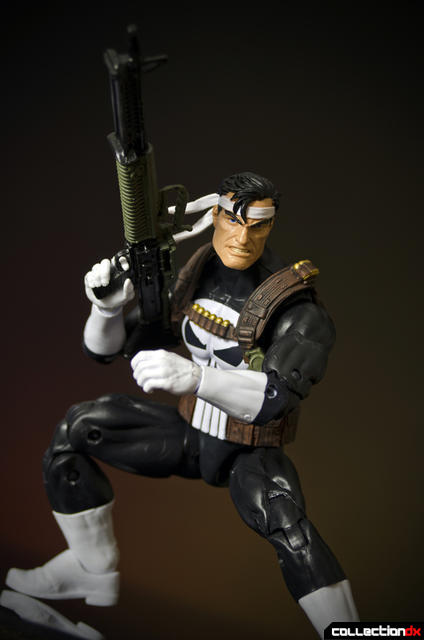 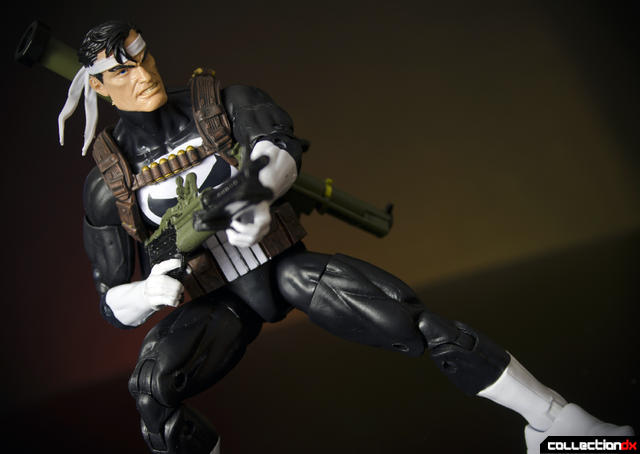 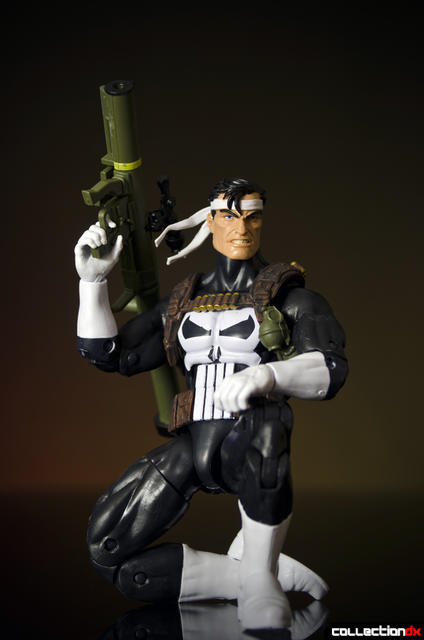 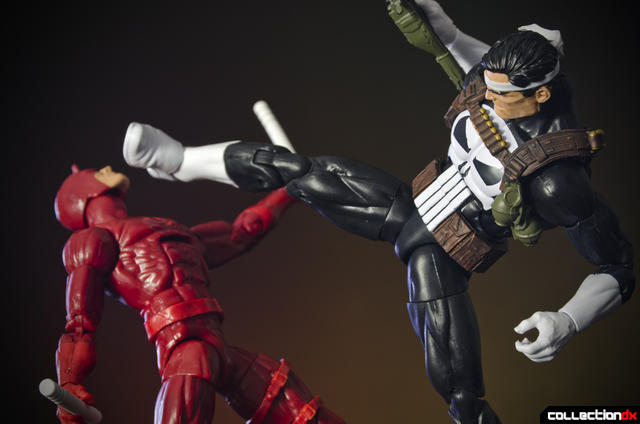 The base body is fairly generic, making it compatible with a wide variety of existing Legends accessories. 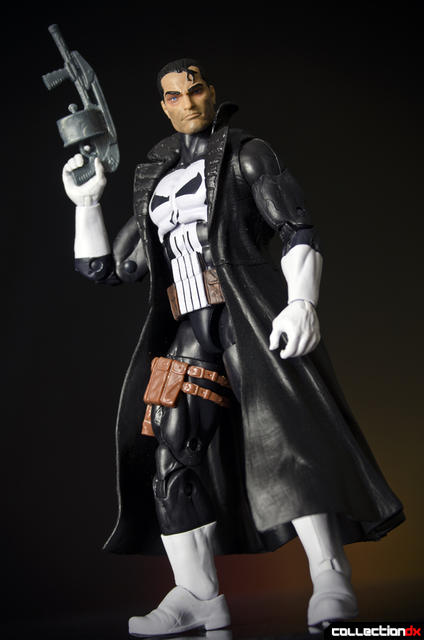 I have one major gripe with this figure, and that is his hands. For a figure with such great weapons included, he doesn't include any hands designed to hold them. In fact, I had to use an exact-o to separate the trigger finger from the rest of the hand just so that he could hold the weapons properly. Neither of the hands grip the weapons very well, and trying to get a natural looking pose with them is difficult. You can see where the handle of the gun is coming out of the gripping hand in a lot of the poses. The rocket launcher is especially hard to pose with. Punishers gripping issues are compounded by his harness wich makes tucking the butt of his M60 under his arm difficult and also makes holding weapons across his chest a chore to pose. The hands are workable, buts feel like an unnecessary annoyance. I mean really, would it have hurt Hasbro's bottom line that much to throw in extra hands??? 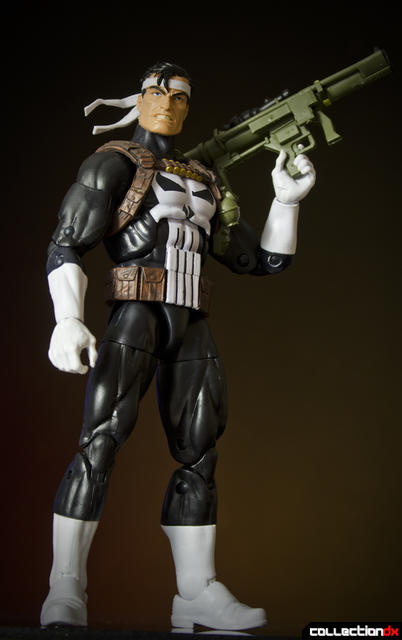 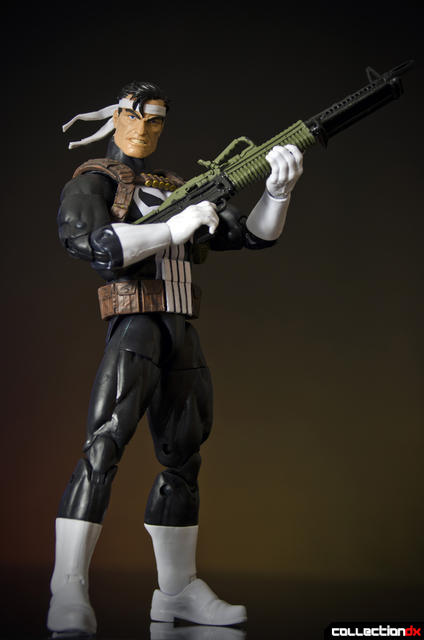 All in all, The Punisher looks great. They did a excellent job of capturing the Jim Lee design and I love the weapons that he comes with. The hands are a disappointment, but shouldn't be a big enough issue to keep most people away. 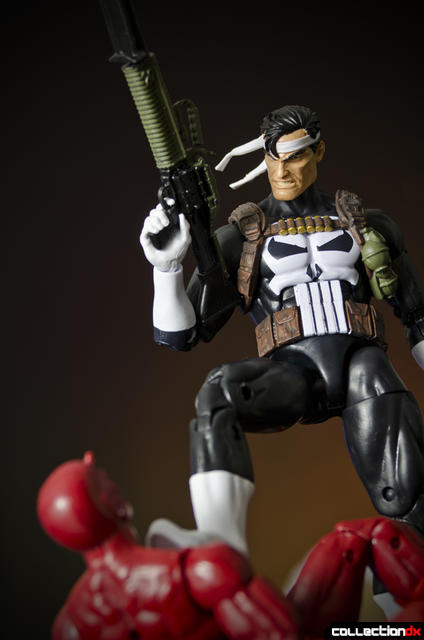 Ender1000, I always really enjoy your marvel legends reviews and especially your pictures!