TFC Toys made a name for itself in the third party Transformers scene by releasing one of the largest and most ambitious not-Transformers to date, the gestalt Hercules.  Herc was a modern update of the venerable Constructicon combiner, Devestator, and wowed collectors with its size and ambition.  Now TFC is back with their next great undertaking, project Uranos!

For details on the transformation and some more general thoughts, make sure to check out my HD video review! 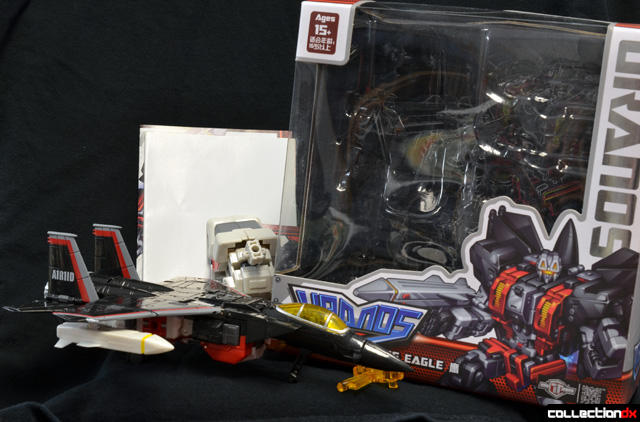 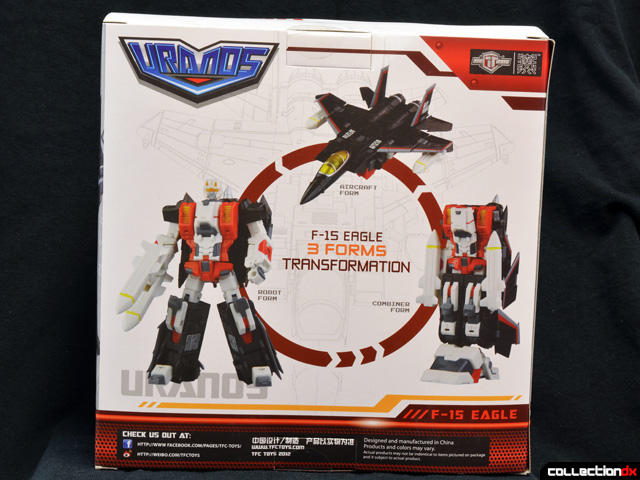 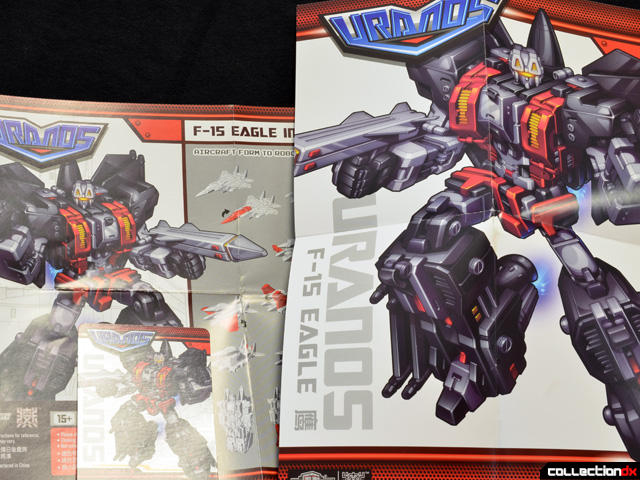 All the requisite paperwork is present.  Everything is printed very sharply on high quality paper and card.  It seems like TFC really wants to give you your money's worth, and I appreciate that. 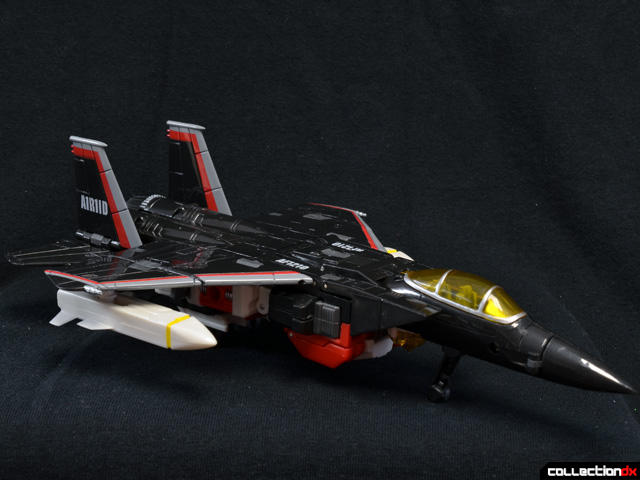 Eagle has a good sized jet mode with nice panel lines, details, and paint.  The F-15 is probably the most straightforward of the last generation of USAF jets.  It lacks the wing sweep of the Tomcat or the aggressive curves of the Fighting Falcon or Hornet.  It is flat, square, and dependable looking, and TFC Toys' rendition captures that. 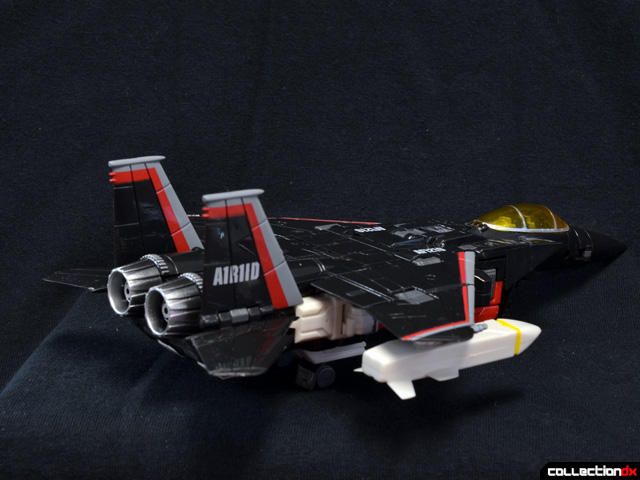 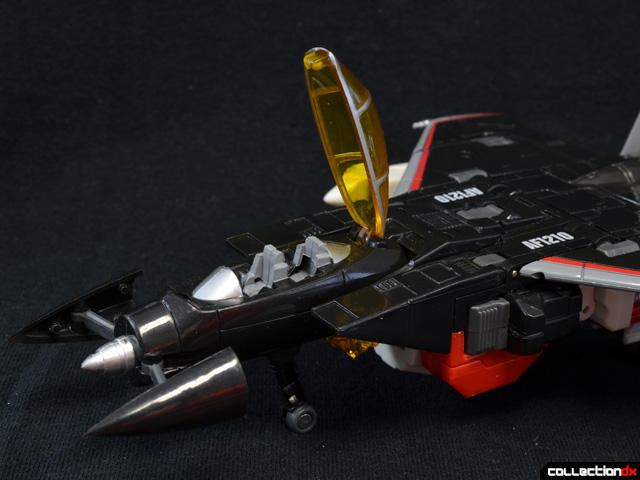 The cockpit opens, revealing two cleanly painted seats and a HUD console.  Eagle also follows in the footsteps of other great transforming jet fighter robot figures by having an opening radome feature.  The radome is a result of the transformation and not accurate to the way the Eagle's nose actually opens, but it gives the jet mode the feel of a legitimate airplane toy. 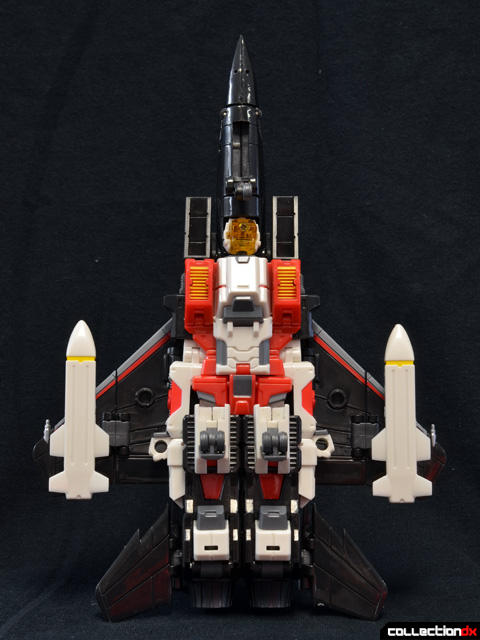 Eagle's underside is not jet-accurate, but does a decent job of forming a cohesive block of multi-colored crap, rather than identifiable arms, legs, and chest.  Turning the head around as I have at least hides the face, but that's still clearly Eagle's head showing.  The landing gear in the nose and kneepads are nice and feature rolling wheels. 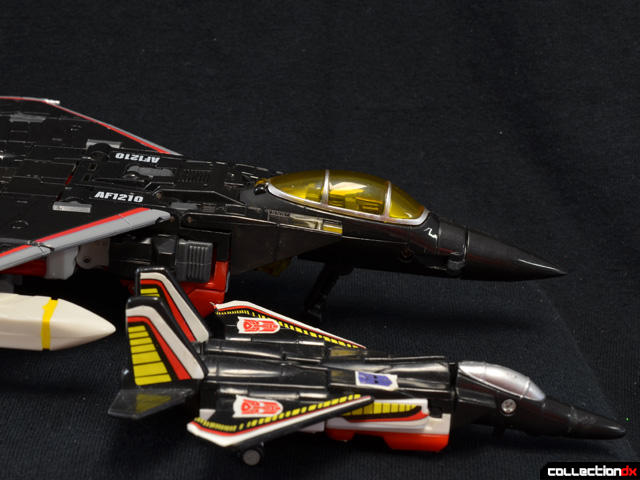 TFC Toys' did a nice job of paying tribute to Air Raid's paint and decals without looking quite as gaudy.  The yellow on the tailfins is gone, and I like the use of gray for the striping rather than stark white. 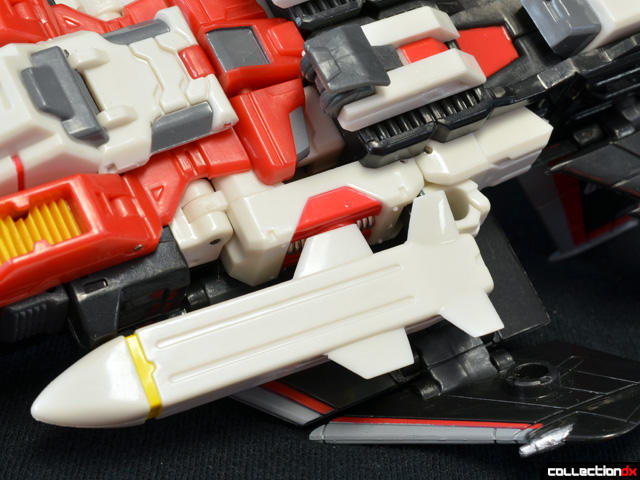 Like Phantom, Eagle includes two accessories that are designed much more for jet mode than robot mode.  Eagle comes with two guided missile or drone looking things that feature very thin and sharp fins, and pegs that can be folded away for some reason.  The drone things are nicely made, but they cannot be mounted on the inner hardpoint in jet mode because the fins bump into the robot mode hands.  The original prototype photos from TFC showed the missiles mounted closer to the body, so it is odd that something was changed that made the fit worse, not better. 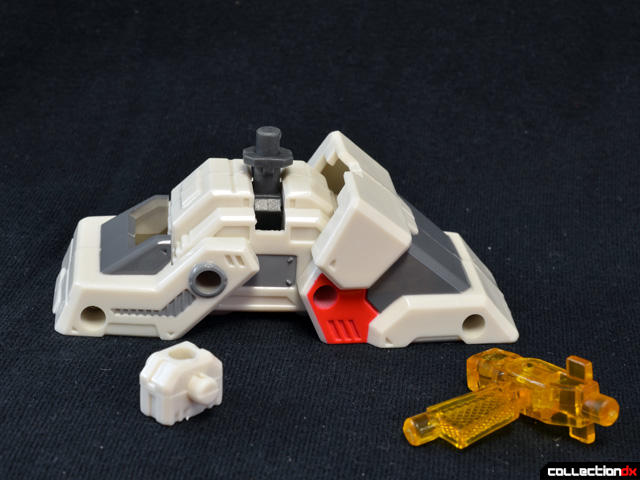 With Phantom, there was nothing to do with the combiner hand while in jet mode.  TFC did something much cooler for Eagle.  The white universal connector part used to attach the combiner bits features two holes, so it can be pegged on as the ankle and also mount the clear yellow piece included. 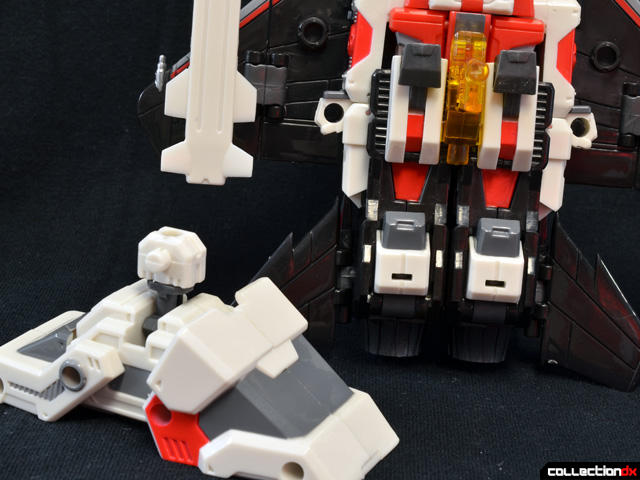 The clear yellow part turns the foot into a flight stand!  The yellow bracket mounts snugly between Eagle's kneepads, and then pegs into the combiner ankle. 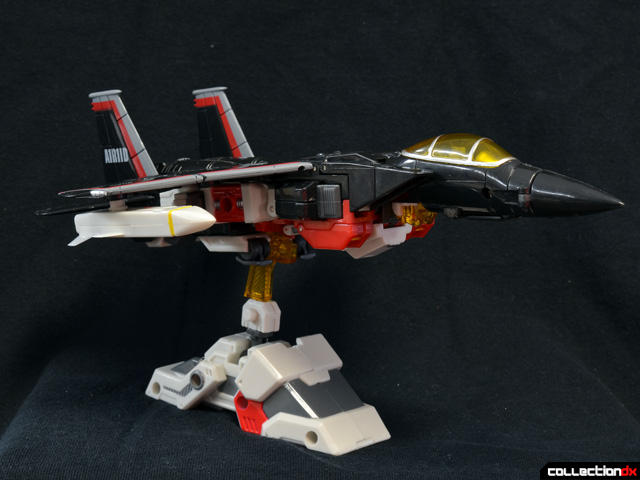 On the flight stand, Eagle looks great.  The bracket has one point of motion on it, so you can adjust the tilt of the jet mode front to back, but not side to side.  The whole assembly feels very solid and I have no problem with displaying Eagle this way. 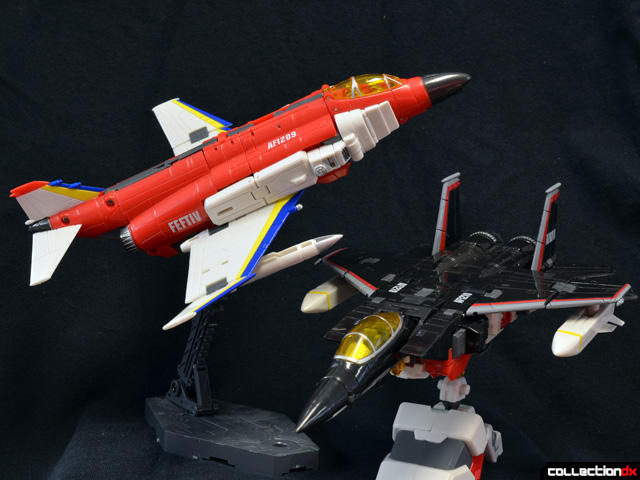 Phantom and Eagle together made a lovely pair of toy jets that also turn into robots and bigger robot bits.  They both feature sharp lines and clean jet modes, at least from the top and sides. 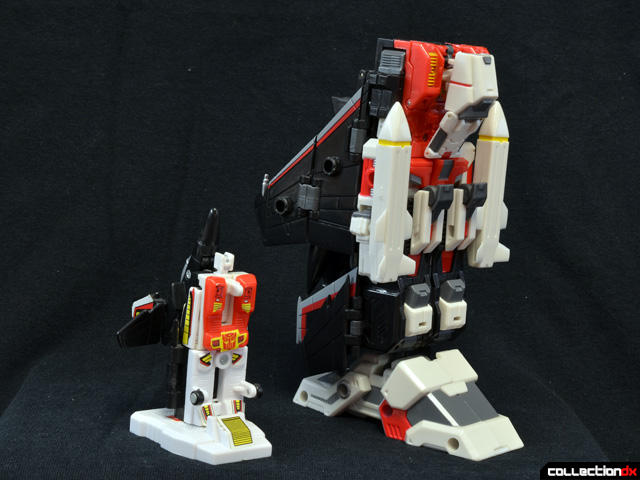 As a lower leg, Eagle excels.  This mode is basically just the jet mode with the nosecone and wings folded back, but it manages to look a bit cleaner and more functional than the G1 toy thanks to the different wing and fin layout and much nicer foot part. 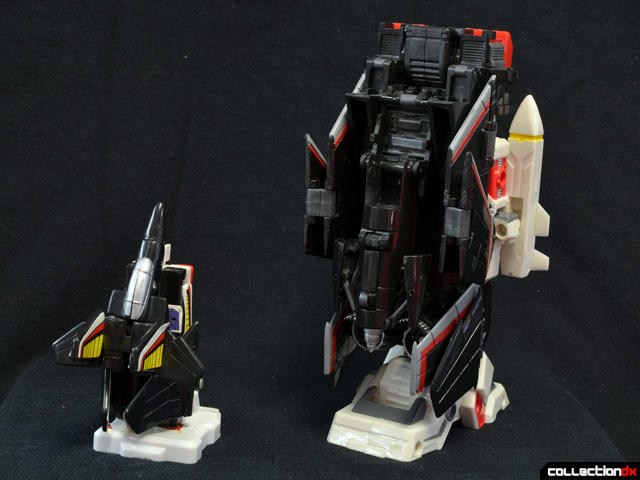 The back is still pretty gnarly, but all those wings have to go somewhere. 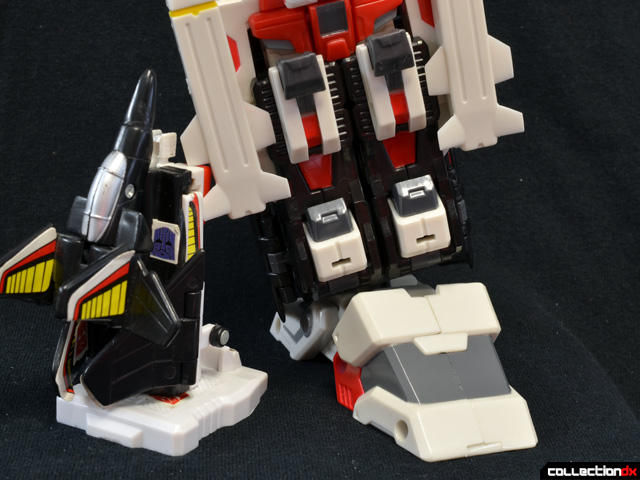 The foot features excellent ankle movement, with a swivel, rocker, and nice toe and heel joints with very rugged feeling ratchets.  All the combiner joints on Phantom and Eagle both feature very nice clicking action, so hopefully Uranos will be a solid feeling combination. 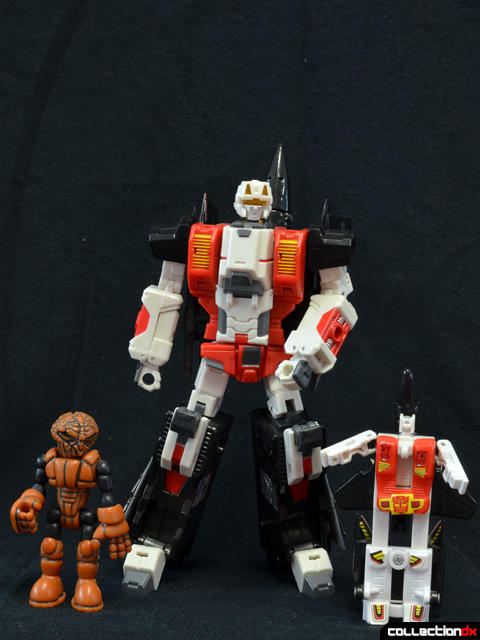 Transformation is straightforward but not quite as nice feeling as Phantom's.  Some of the tabs and things needed to lock the jet mode together do not fit quite as nicely, so they come apart easily to transform.  Eagle's robot mode as transformed in the instructions is a nice, clean update to the pretty plain G1 design.  The robot mode manages to be much brighter than jet mode thanks to all the white and red bits that fold out.  Articulation is good, not missing any major beats. 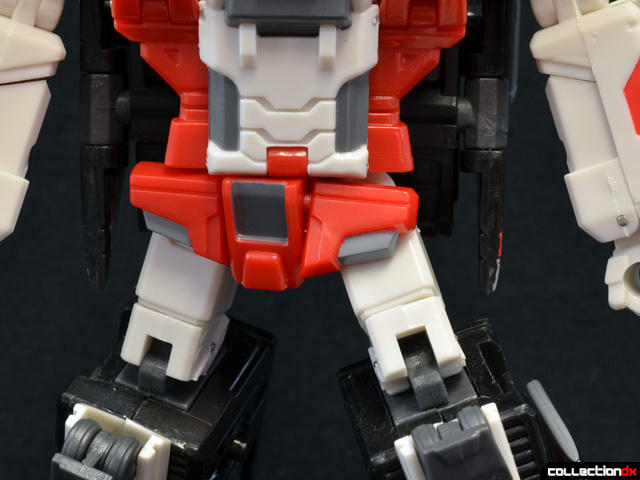 The skirts on the front are hinged, allowing for a very nice range of leg movement. 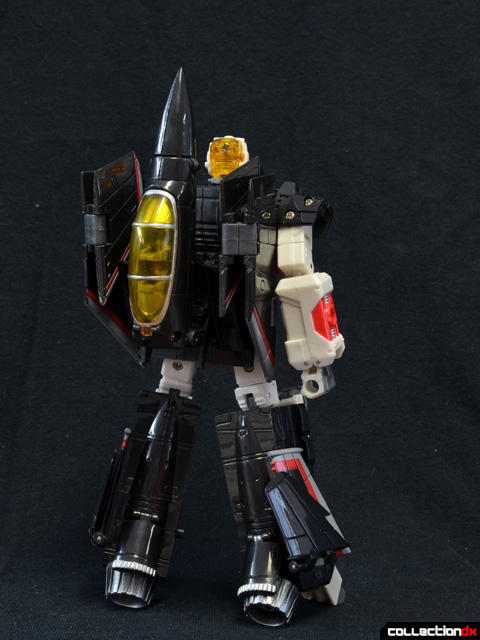 TFC has made some changes to the back of Eagle to differentiate him better so all four Uranos bots do not have the exact same nosecone and tail assembly backpack.  Instead, Eagle transforms much more similarly to a standard Decepticon F-15 seeker a la Starscream and his ilk. 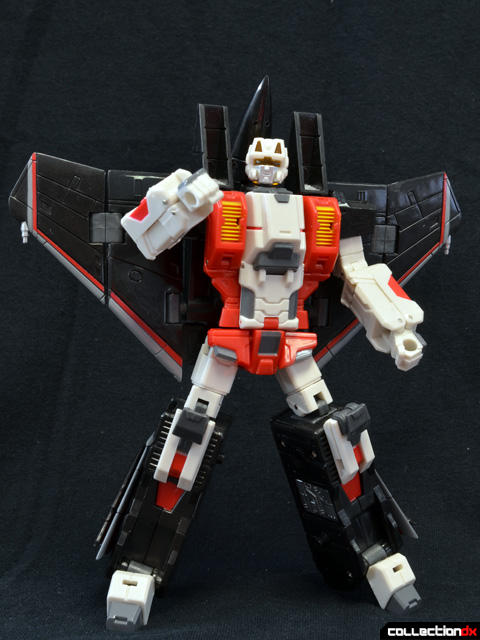 Speaking of Starscream, Eagle can be alternately transformed into a nicer looking G1 seeker style robot mode than some actual Starscream toys.  I have seen some speculation that TFC would consider doing a Decepticon jet repaint of the Uranos set down the line, and the presences of a pretty close looking seeker looking guy would seem to support that. 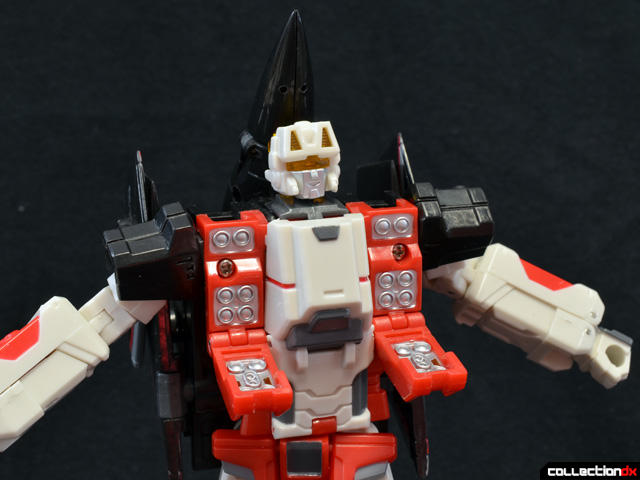 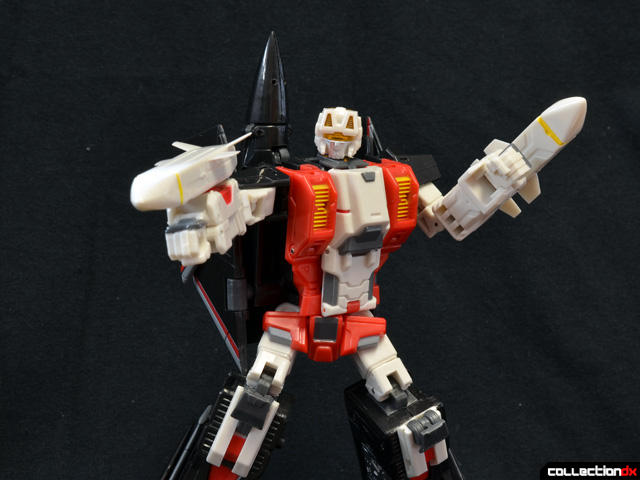 The missile/drone things make lousy weapons for robot mode.  They can be pegged on to the arms or held in Eagle's hands, but they still look mostly like missiles and not much like guns. 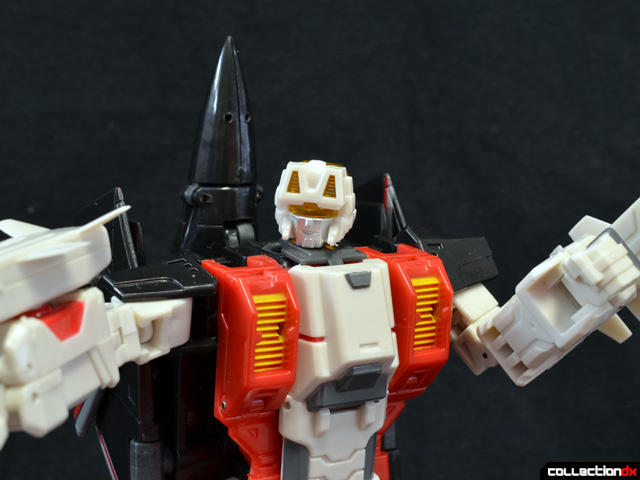 Even with weak accessories, Eagle is a great looking figure.  The head features some neat light-piping and the face has a good heroic Autobot look to it. 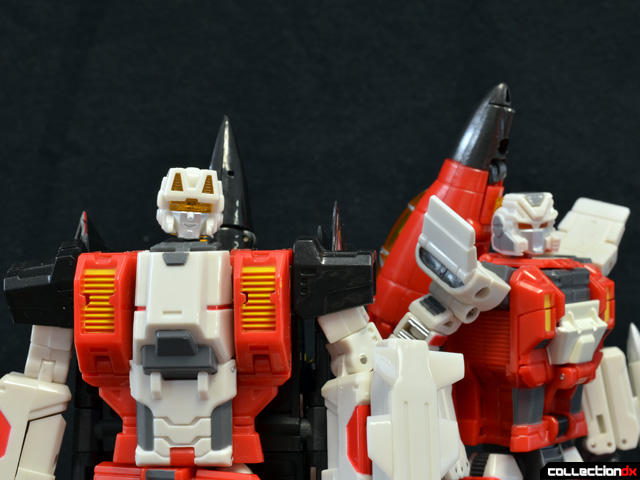 I still like Phantom much more than Eagle.  Eagle is not a bad figure by any means, but nothing stands out to me the way Phantom struck me.  Maybe it's F-15 burnout from the bevy of Decepticon seeker toys that have been released.  Hopefully the other limb guys are a little more flair to them. 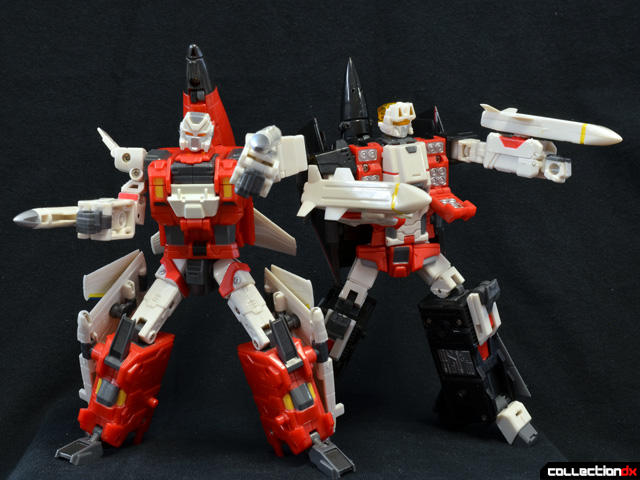 Still, Eagle and Phantom do look great together.  They are nice jet toys, solid robot with jet bit toys, and seem to form good combiner limb parts.  Next released is Blackbird, the leader of the group who forms the combiner's torso, so we will get our first glimpse at the combiner Uranos.  Hopefully it holds up, because Phantom and Eagle are both very well made figures and have set high expectations.  Even if I'm not crazy about Eagle, he's still worth picking up as nice jet-former.  I would not pay a hundred bucks for Eagle as a standalone figure, but if found on his own for less, he would not be a bad choice.

I'm noticing you didn't mention anything like in the F-4 Phantom about those screw covers for the back of the fighter mode. Are there no bits with this one?

Nope, there are no offending screw holes on the top of the fighter mode, so no screw covers. The covers were a bit of a pain on Phantom anyway, and I ended up having to glue one in.

I realized that I forgot to set the video to Public this morning. It's fixed now, so be sure to watch the video review in glorious HD!

So I am fairly certain those munitions that come with Eagle are DWS-39 cluster bombs. Which is funny because one of Starscream's weapons are cluster bombs.