Hey all, Jmann here with a review of S.H. MonsterArts Predator Wolf (Heavy Armed Version). This is apparently from Alien Vs. Predator: Requiem. It's been so long since I've seen that movie that I honestly couldn't tell you very much about it, except that it wasn't very good. I have very fond memories of the first AVP because I saw it with my dad, and it was one of the first times that he and I went to see a movie by ourselves. This would become a tradition where he and I would sneak off to see movies that my mother would probably not approve of.

Anyway, this is an armored up version of the main character from AVP. He is ready to run out and hunt some Aliens (or Xenomorphs for the purists out there). 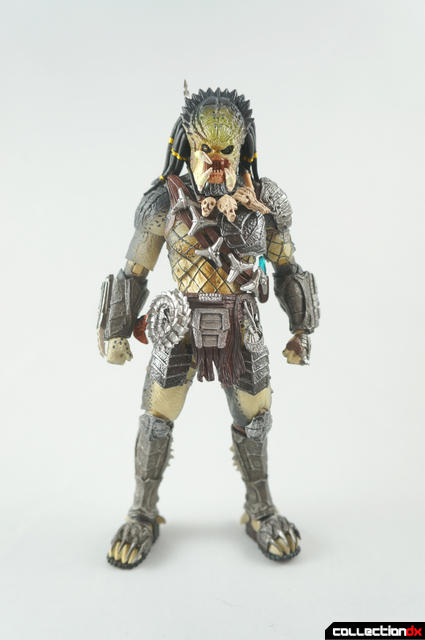 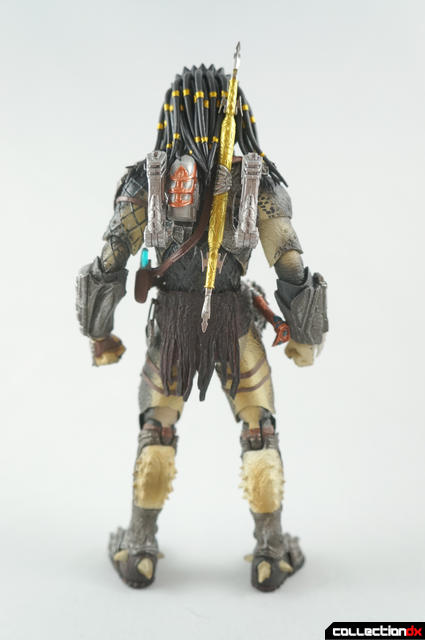 First off, the details and sculpt of this figure are amazing. There is so much detail on this figure. Of course, this is to be expected from an S.H. MonsterArts release. SInce they are directly competing with "other" Predator figures it would make sense that they would attempt to outdo them in any way possible. 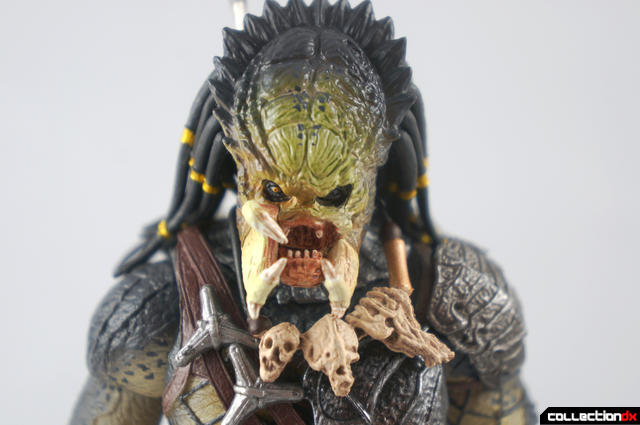 Just look at this face. 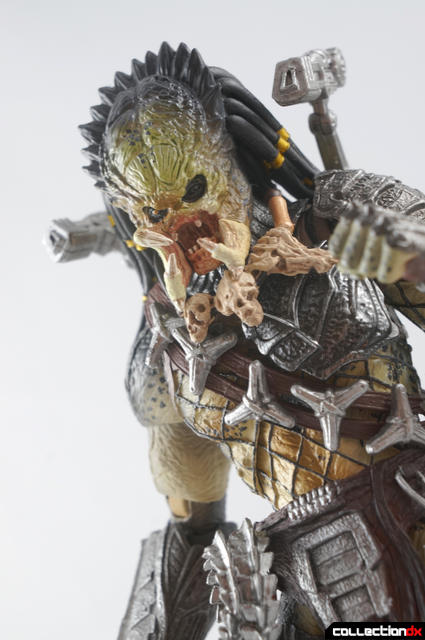 LOOK AT IT. He even comes with an extra set of Mandibles for yelling. 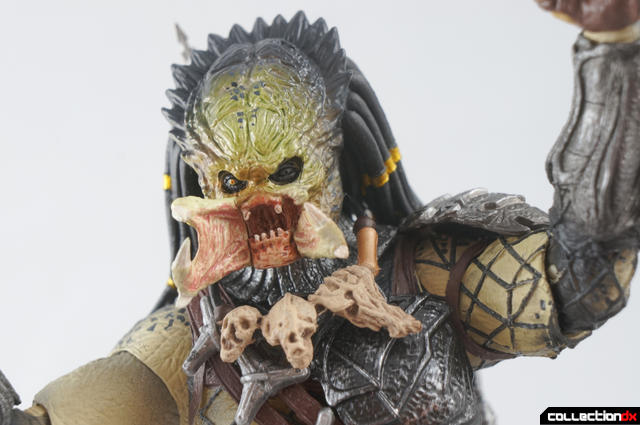 Of course, it kind of makes him look really silly. As much as I love this head, I absolutely prefer the Helmeted head. 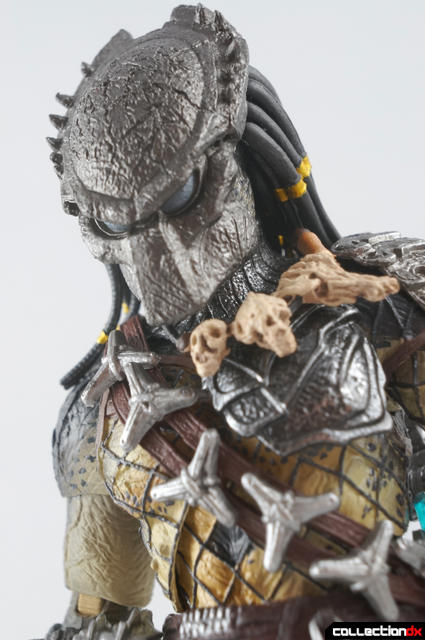 I really love the paintwork on this figure. All of the armor bits look like old iron and that's awesome. My biggest complaint is the color discrepancy between the face and mandibles. 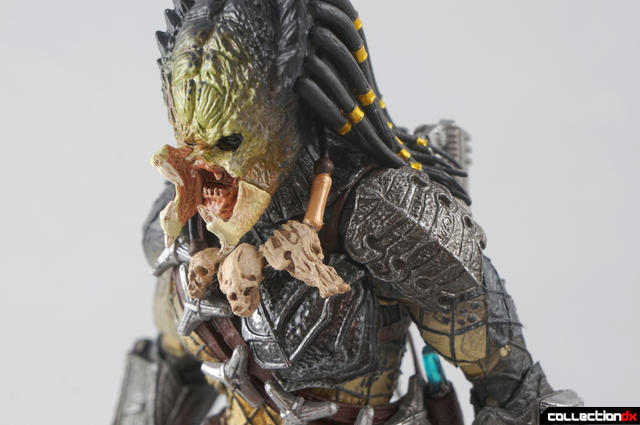 You can clearly see how they are different colors so it really seems off to me. I would rather have had one set of mandibles that were molded onto the head as long as they looked natural. 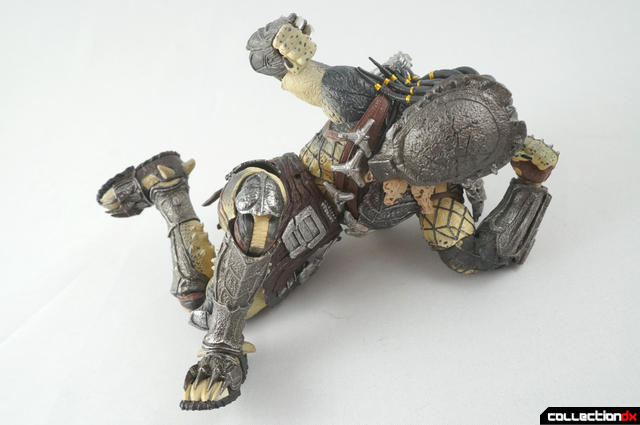 I should probably go into the articulation before I talk about accessories. For the most part, this MonsterArts figure is built like a Figuarts figure, except it has a few neat MonsterArts joints. 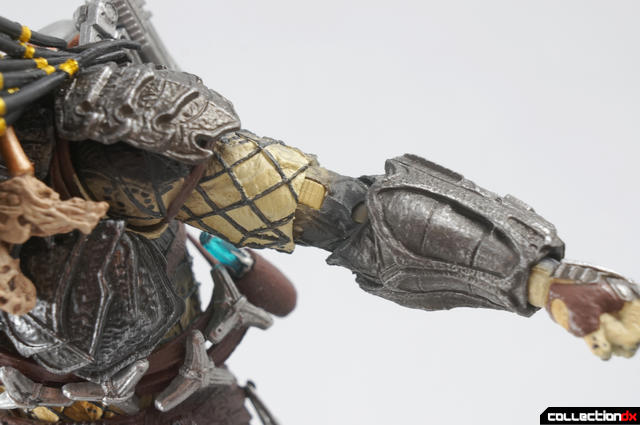 The elbows and knees contain double joints that are really nice. There is a normal swivel on the bottom of each joint, but then there is another joint that goes up inside the thigh or arm. 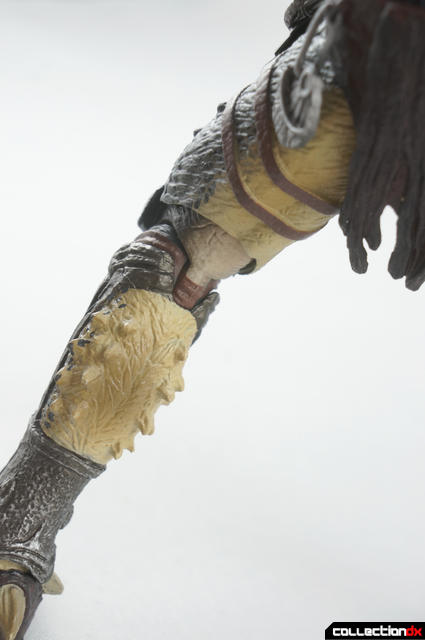 I'm not sure why they decided to do that instead of a Figuarts-style joint, but I'll acccept it because they work really well. You can pretty much see the rest of the joints. You have ball-jointed everything else, including the feet. The ankle joints work pretty well, but they loosened after a few play sessions so I'd watch out about that. The ab crunch is really deep and works really well. 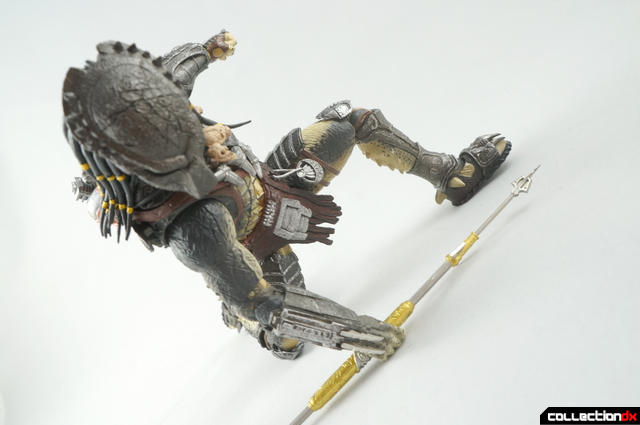 Overall, the articulation is pretty good. It's one of the most articulated Predator figures we've ever gotten. 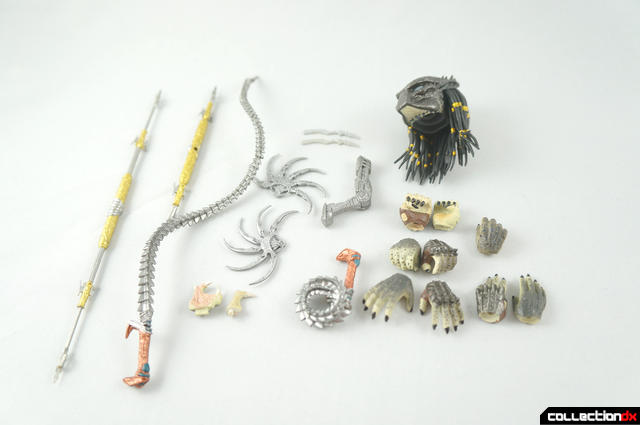 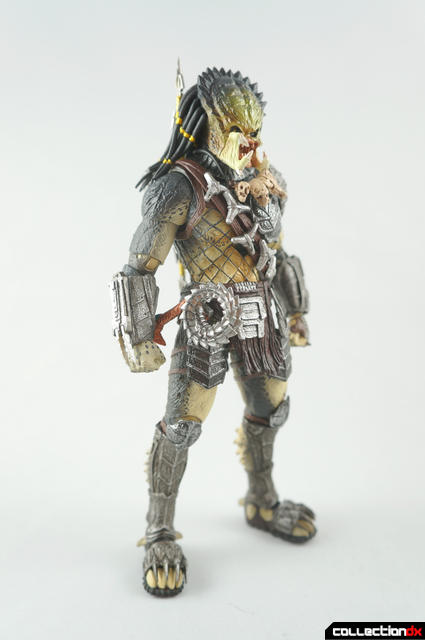 All of the accessories fit well on the Predator. I really like that everything has a place. Weapon storage is a big deal for me, so I like that he can attach basically everything to himself. 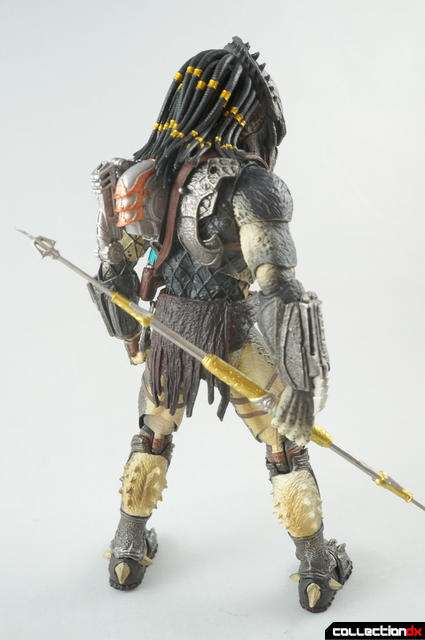 His hands do a good job of holding his accessories. 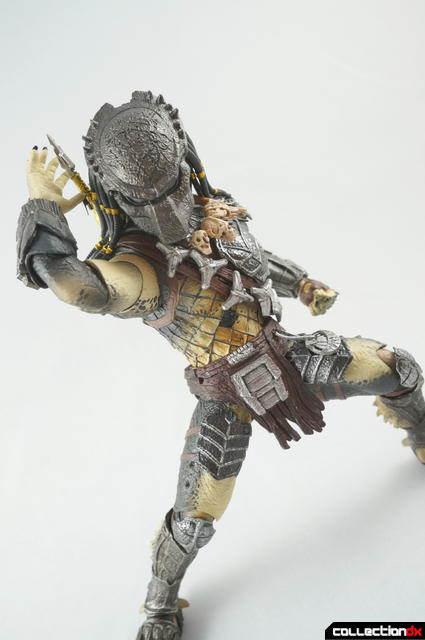 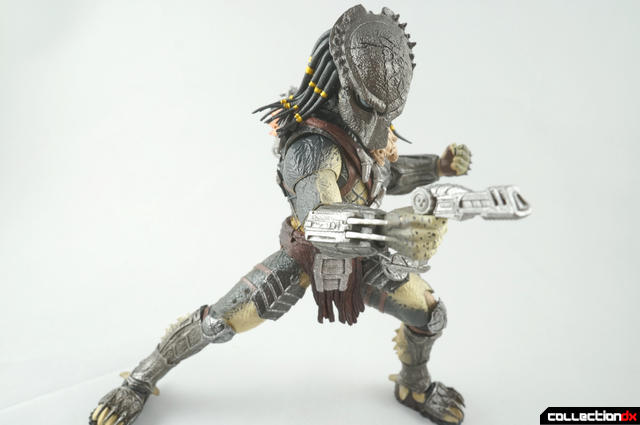 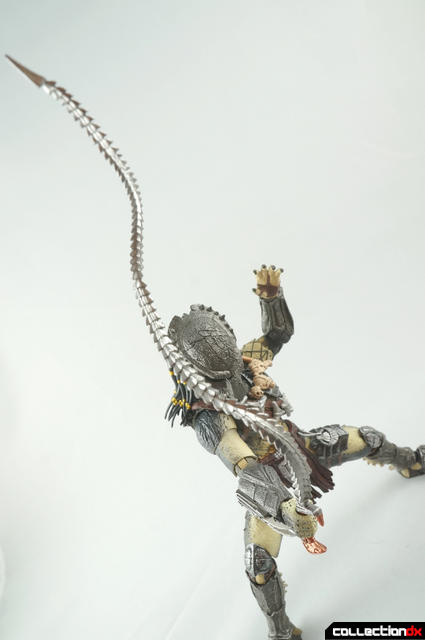 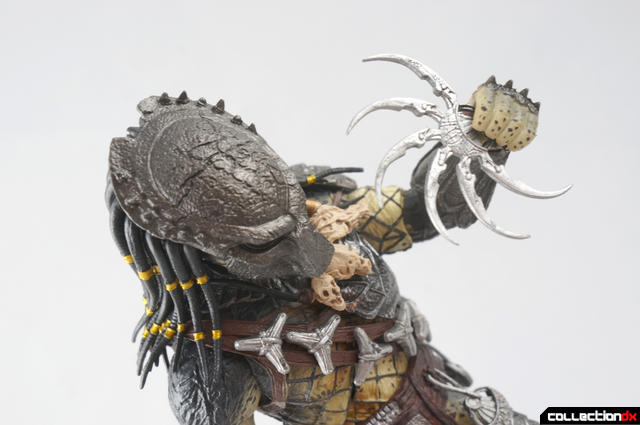 Except for his throwing stars. They are supposed to fit inside his calm hands, but I couldn't get them to attach to anything so I had to resort to putting them in his closed hand. It doesn't look right. 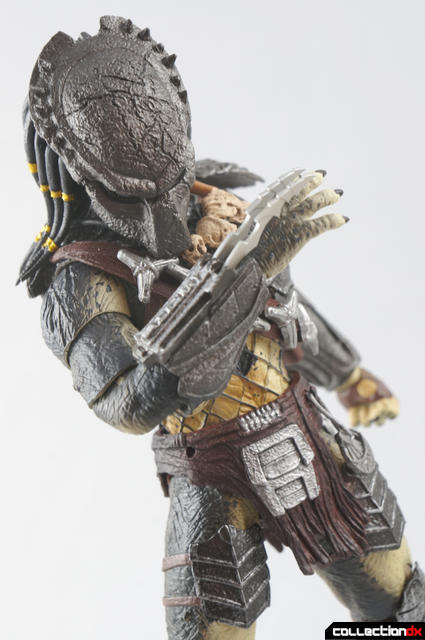 Also, because he has so many things attached to himself, he starts to be a bit fiddly. Throughout the review and earlier play sessions, his parts would fall off and I'd have to reattach everything. While that's to be expected on a figure with so many layers and parts, it really kind of ruins his play value. It got to the point where I just took everything off so I could pose him with no issues. 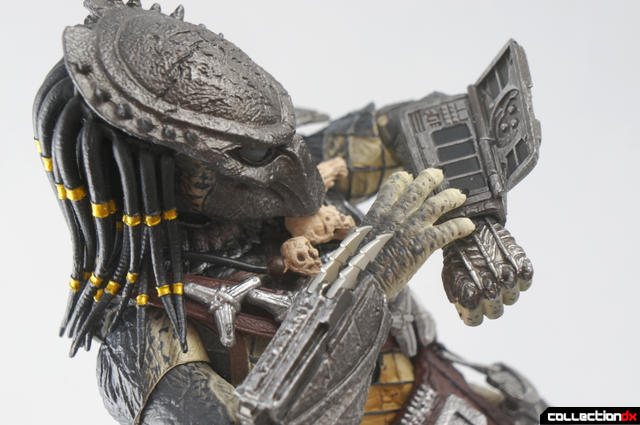 Overall, this is a pretty great Predator figure, albeit with a few big nitpicks. As much as I like him, I can't shake the feeling that this could have been executed better. If you MUST have a Predator for your collection, there are more iconic and less fiddly options out there. After this release, I'm sure it's only a matter of time before Bandai releases a figure of the original Predator. I would recommend holding out for that one instead. 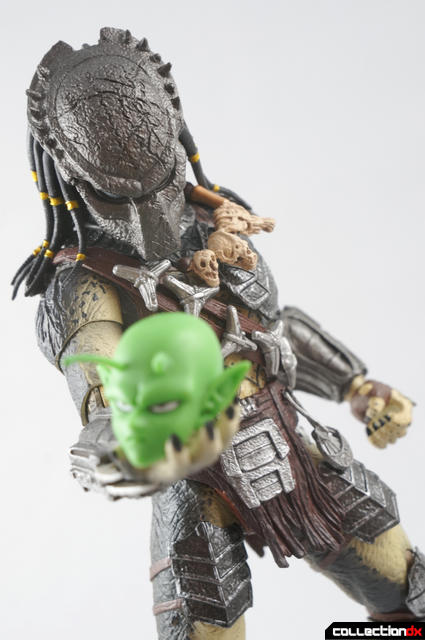 I've noticed people are being overly critical of this figure, and I strongly disagree... so here's my two cents.

Bandai's Wolf Predator has excellent articulation, a plethora of accessories and an okay price. He's about 7" tall and is well proportioned with molded details that are slightly crisper than NECA's Predator offerings along with superior paint aps. Anyone that is complaining about paint aps is being nit-picky, the details that are present easily punch above their weight. My only complaint would be that the scarring on his face should have been more prominent, but an easy fix nonetheless.

This figure is fun to handle, and more enjoyable to pose and photograph than any of my NECA figures - and especially more so than my Hot Toys Predator figures - which are in need of updated (more sophisticated) ankle joints. If you like to pose and handle your figures, or like me just wanted one specifically for this purpose, you've found your Predator.

Some people complain about the body armour & the face mandibles popping off too easy. The mandibles could have fit better, but otherwise all is executed perfectly, the parts get knocked-off because they are simply there, not as a consequence of poor design, and mind you, I have ZERO problems in this department. Once you are aware of the accessory locations on his body, you instinctively avoid them.

As for parts and accessories breaking... people that are making these claims might want to consider what they are doing wrong, because this figure is no more fragile than what would commonly be expected from an adult collectible of this nature. Something of note is that you will receive different accessories based on which version you buy. One is the "Cleaner" version, while the other is the "heavy armor" version. They both have accessories that are unique unto themselves.

Ultimately this figure captures what's fun about action figures - a convenient size, accessories galore and, simply put, just fun to "play" with. I hope Bandai has more planned for this line, as it's a great design that perfectly straddles the point between Neca's entry level Predator line and Hot Toys' high-end Predator line.

As far as I'm concerned this Predator is a must buy for fans of the creature design, and people that enjoy a well-engineered action figure, that's also fun. Worth every dime. -Chris