As a car guy, I typically have no interest in SUVs, Station wagons and of course mini-vans. However, there is one mini-van I always thought was pretty cool. Being a kid from the 80's, I watched a lot of Transformers. I always dug the Ironhide and Ratchet characters and didn't mind that they turned into vans. Ironhide turned into a Mitsubishi-like red van and Ratchet turned into the same van but in Ambulance livery. To me, the G1 toys were pretty bad. They looked nothing like the cartoons. There have been very few good versions of these two figures since then. Fortunately for us, Third Party companies have been providing some pretty cool stuff including a G1 styled Ratchet and Ironhide figure that actually looks like its cartoon counterpart!

He comes is a thick cardboard box with some pretty nice artwork out front with hints of G1 grids and colors. 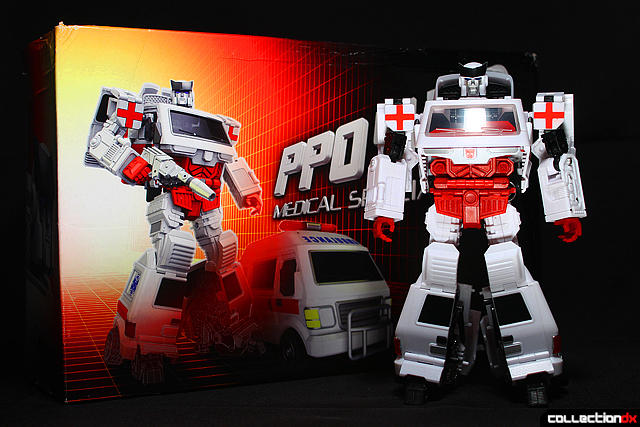 The figure comes out of the box in Ambulance mode. It is pretty much spot on and features really nice detail like chrome bumper guards and clear colored lenses all around. See the tires? Yeah, they're rubber. 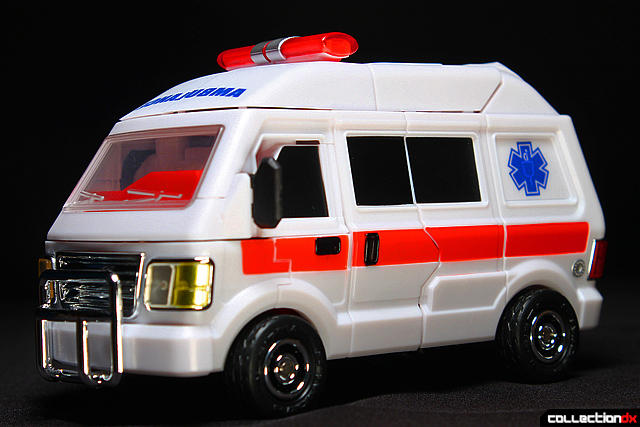 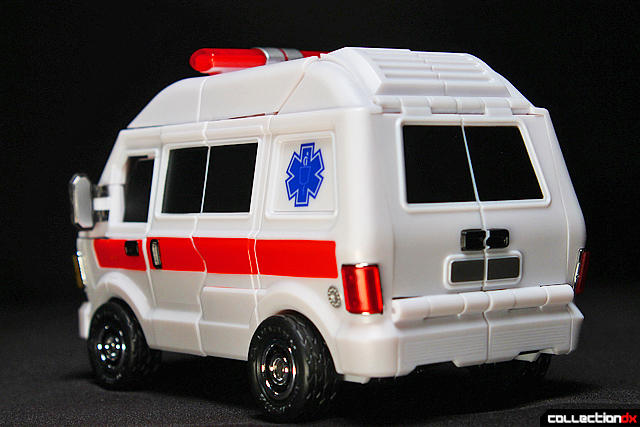 For something relatively complex, it looks pretty clean underneath. They really maximized the use of space in it's engineering. 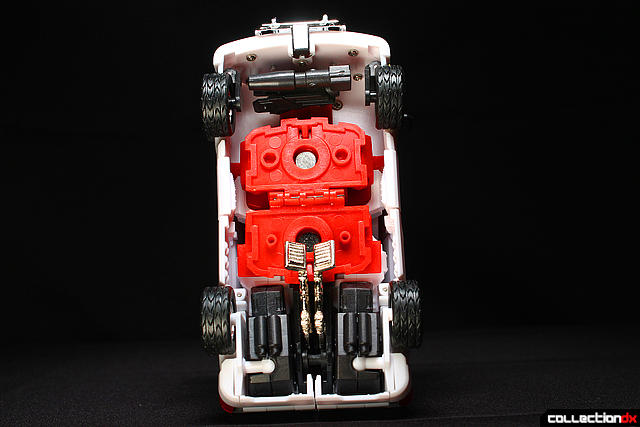 Included is a color instruction sheet and a fancy plastic spec-card. 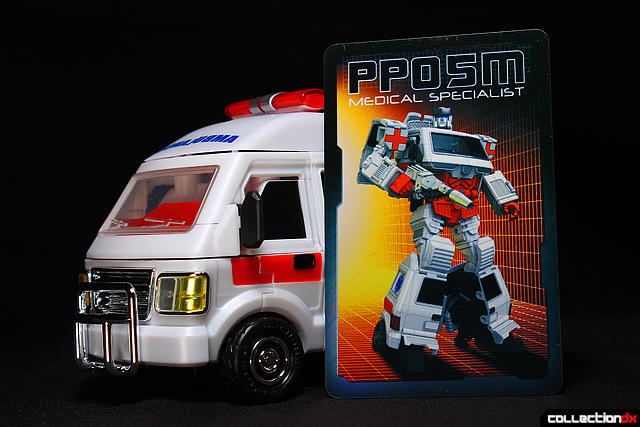 The transformation is a bit confusing with or without instructions. The instructions are clear and computer generated but I found the arrows a bit confusing at times. It's not a frustrating transformation, but it's not what I consider easy either. What you are left with is an absolutely great looking transforming toy robot that looks and awful lot like Ratchet... Pretty clean all around. 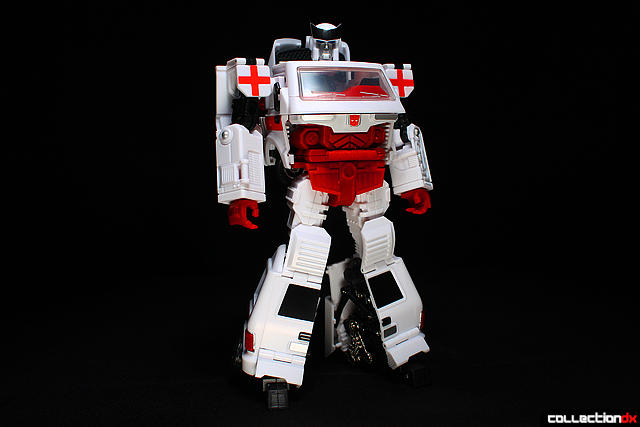 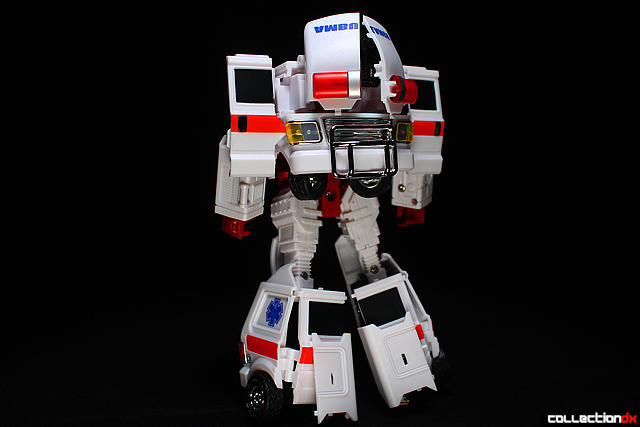 Articulation is what's expected of a modern transforming robot. 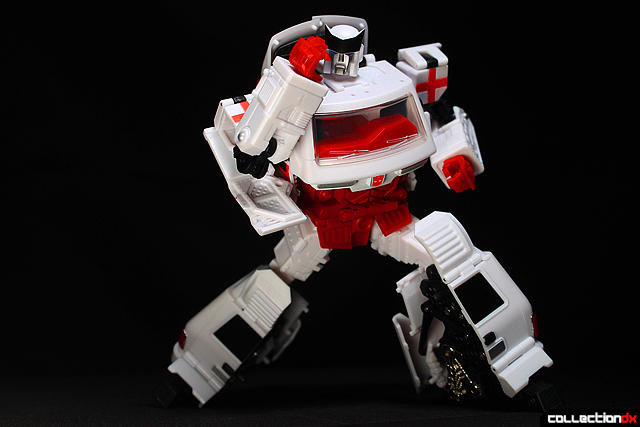 If you like accessories, you'll be jolly happy with this set. Like any good mechanic, her comes with a set of calipers, a "BFH"... 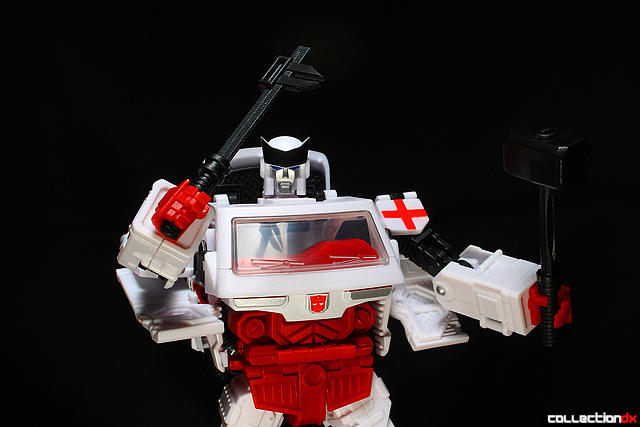 ...an open-ended wrench, a flat-head screwdriver... 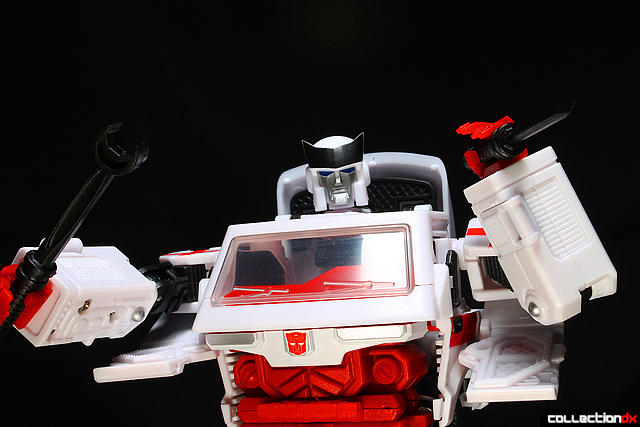 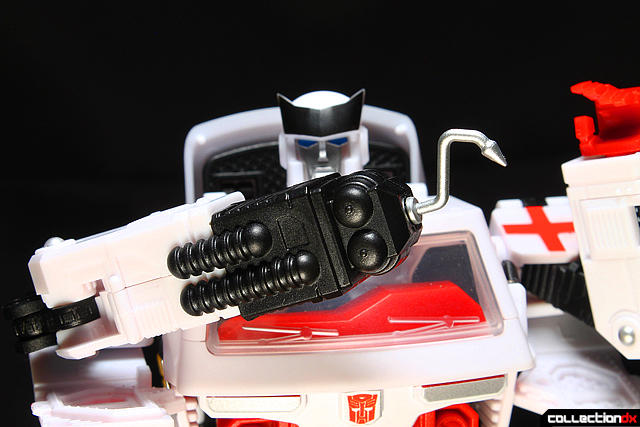 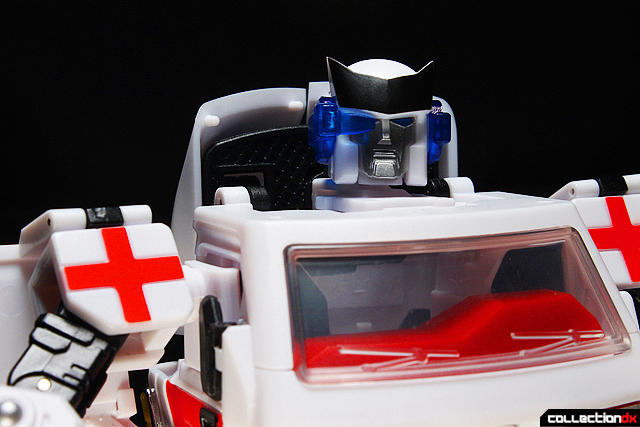 ...and last but not least, a spare head? Not a proper mechanic tool, but yes, this set comes with a smiling alternate head as seen in the IDW comics 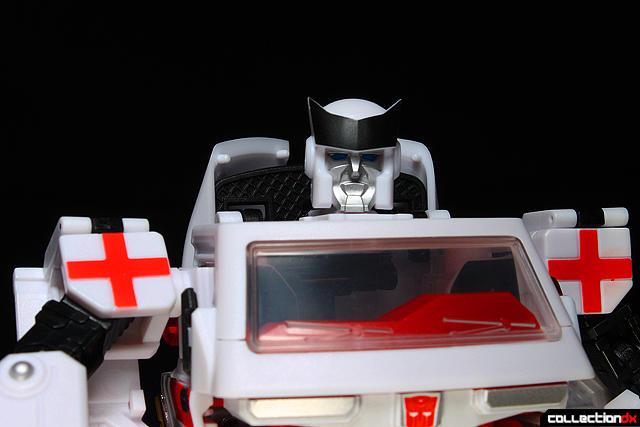 If neither included heads are enough for you, maybe a red head will do? This head was in a baggy taped to the tray and not part of the tray itself like every other accessory. This is so he can look like he did in the Marvel comics 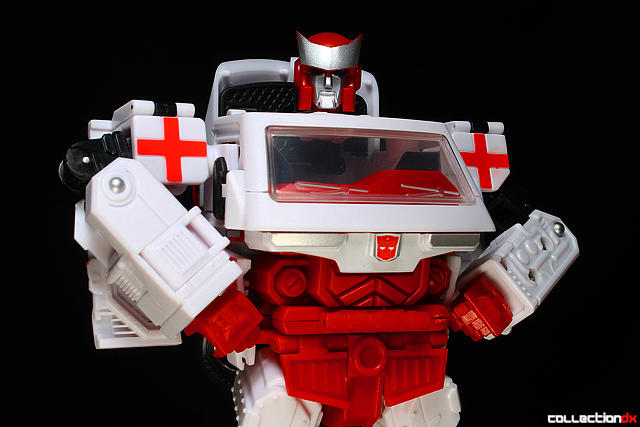 Not only did he fix his fellow Autobots, but he was also a soldier. Hence a good amount of included weapons. From basic to "OMG RUNNNNNN!" 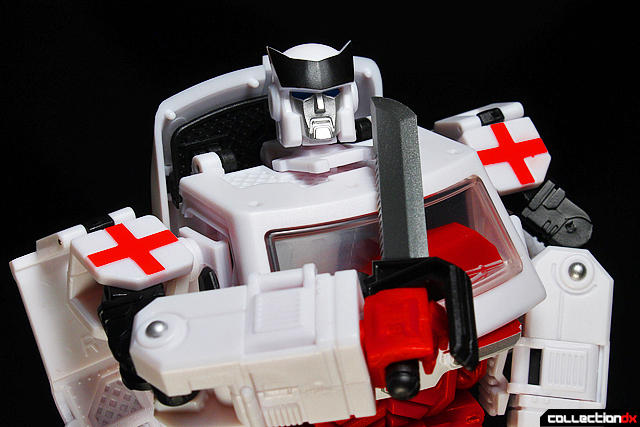 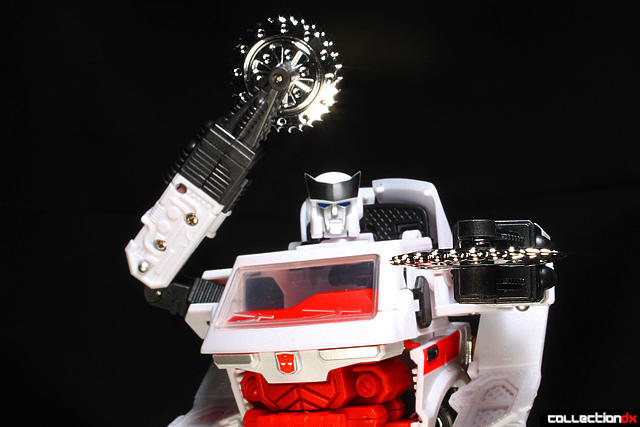 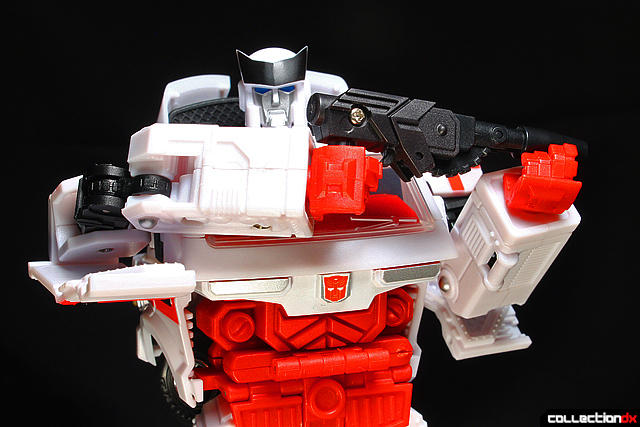 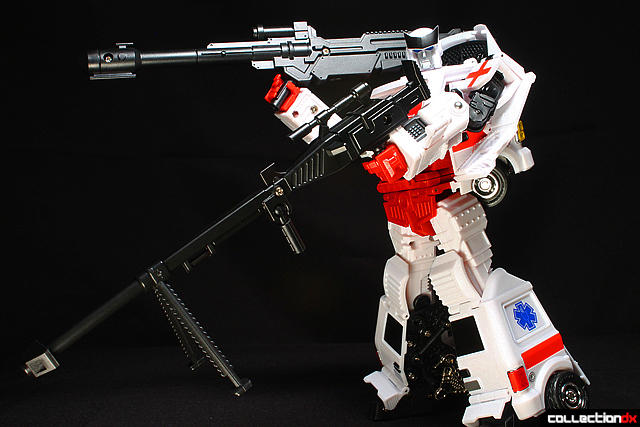 One really neat feature that I like is the communicator on his arm. You flip open a panel and attach an antenna to complete the effect. 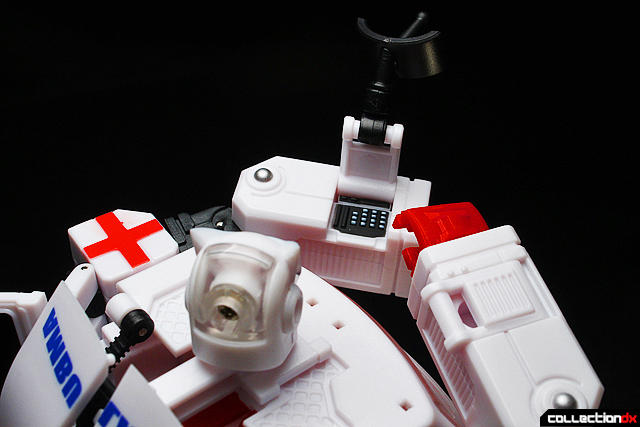 On his other arm you can also flip open a panel and attach a weapon if you'd like. 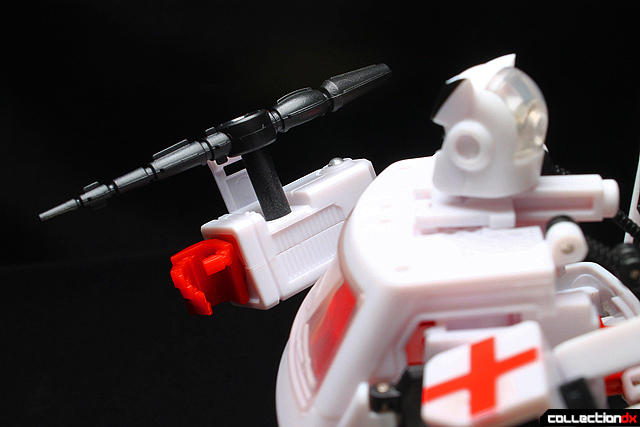 In case anyone was wondering, he actually has a small bit of diecast metal. It's pretty much there to be able to say it has diecast and nothing else. It's not a part that really needs to be metal, but who am I to complain? I love metal.

He looks great in any Transformers collection even if he isn't an official Transformers release. I don't know how he is supposed to scale in comparison to other Transformers (As if there even is such a thing as proper scale with these things). His Ambulance mode is deluxe size but his robot mode is much bigger. Nonetheless a great release. Now I gotta save up for Ironhide. 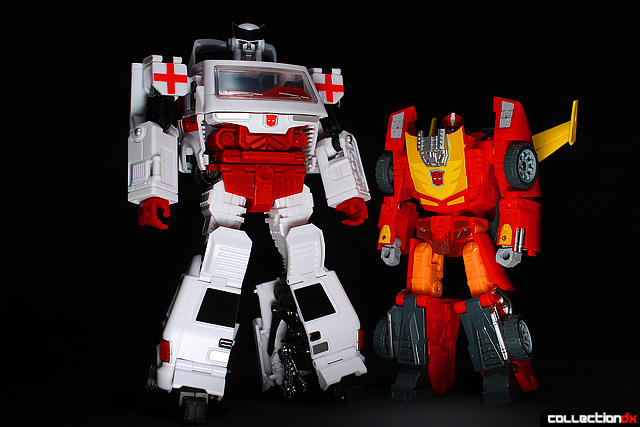 love the accessories ....not bad dont really like the feet ...but this is probably the best medic people will get until takara decides to release a masterpiece....

IMO these are the best figures from Transformers released in 2012 so far.

If you want the weapons then the value you get for $110 is well worth it.