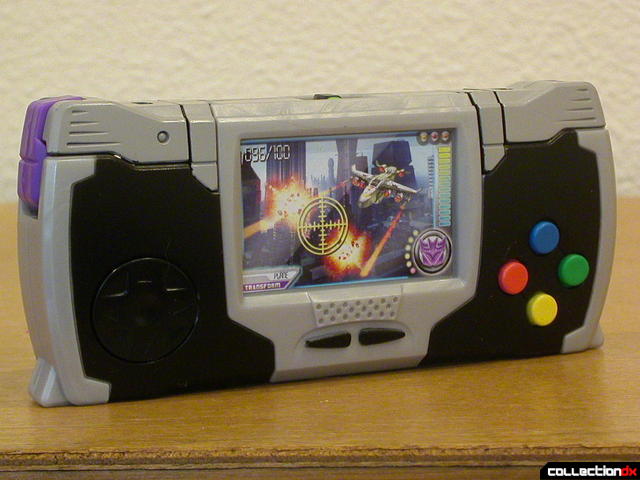 Power Up VT6’s disguise mode (back) is that of a generic portable hand-held gaming device. It is molded mostly in light gray ABS, with two separate purple ‘buttons’ along the top edge. The non-descript “Start” and “Select” buttons, also, are painted black. The circular direction pad on the left side is molded in black ABS. The four buttons on the right side are actually molded on a single black piece under the grip, and then painted their respective colors- blue, green, yellow, and red. The big display screen is actually a decal applied in the factory. Details on the screen are: a green and silver plane firing orange blasts, a cityscape background, a targeting icon, a purple Decepticon symbol in the lower right corner, a power indicator along the right side, and target-identifier & player command icons in the lower left toolbar. (For those of you keeping count, that is Voyager-class Autobot Jetfire from the 2006 “Transformers: Cybertron” line in the picture.) I suppose that the left and right button controls are the special feature of Power Up VT6. Both sides are held up by single springs underneath. The four color-coded buttons are actually one piece; pressing on one moves the other three. 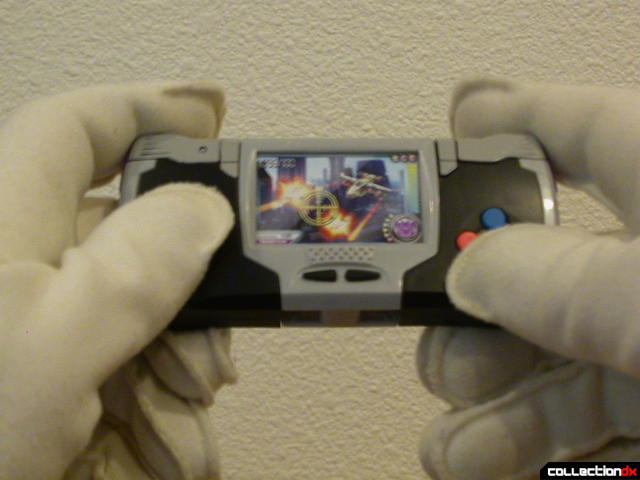 Transforming him is a piece of cake- very simple to understand, very simple to execute. Unlike the majority of the Real Gear Robots line, Power Up VT6 has what can be described as an Automorph feature, which is found in each of the main figures from the movie line of characters- the standard Deluxe-class, advanced Voyager-class, and especially-complex Leader-class. As the legs are deployed and shifted downwards at the waist, the shoulder and head automatically extend out from the center of the body from behind the display screen. It’s a little unexpected considering that Automorph is absent from the rest of the Real Gear Robots line, and it’s tricky to figure out where to place your fingers the first few times you change him. After securing his hips together to finish off the Automorph, the rest is manually changed- flipping out the claws, lowering the arms, and repositioning the legs.

Power Up VT6’s robot mode (back) is a bit on the thin side. Looking at him from a side profile, from his knees to his head is all really thin; however, looking at him from the front, his legs are thin front waist to feet, as are the arms even more. His head is even flatter, though it does feature eyes that glow green when light shines through them. His hands are more like claws, but it’s hard to tell since they’re really thin, and can’t grip anything. His lower legs are jointed on the back side of them, and look rather awkward. His display screen is prominently shown across the front of his entire upper torso. Poseability is good. There are regular twist joints in his neck, shoulders, wrists, hips, and knees; while ball-and-socket joints are in his elbows and hips. The biggest issue in posing him is how far forward his lower legs are position from his upper legs. With little support in back, he is prone to falling over backwards easily despite the small ridges at his heels. His hands/claws can pitch up and down due to how he transforms, but since they don’t really look like either claws or hands, it’s hard to pose him in a satisfying way. Unlike most of the toys in the Real Gear Robots line, none of the screws on Power Up VT6 are covered. This may owe to the fact that screws are usually seen on real hand-held game devices. Also, most of the Real Gear Robots are representations of smaller electronic devices, and so the screws are usually hidden or not seen at all on things like cell phones (Autobot Speed Dial 800) or multimedia players (Decepticon Booster X10). Because of how small he is compared to a real game device, the screws on Power Up VT6 are more prominent and thus their presence is exaggerated & more noticeable. Simple and fun. That is the mission of the Real Gear Robots line, and this toy does that fairly. I was looking forward to getting him, but when I finally did, I was disappointed. The lower legs were a big part of that, and I thought that maybe they could have been redesigned a bit; maybe eliminated those large gaps on the front of them too. Also the hands, again, bugged me a bit, but I’m not quite sure why. The Automorph feature, too, was a surprise, though I’m not quite sure if it was a good idea to add it. That I know of, none of the other Real Gear Robots have Automorph, so why should just this one? Colors didn’t bother me, nor did the articulation. In disguise mode, he’s just fine, and I had no problem with it other than perhaps his small size, but that is the sacrifice of the line to make them cheap. Something just didn’t work right here, or he rubs me the wrong way, so I mildly recommend getting Power Up VT6. 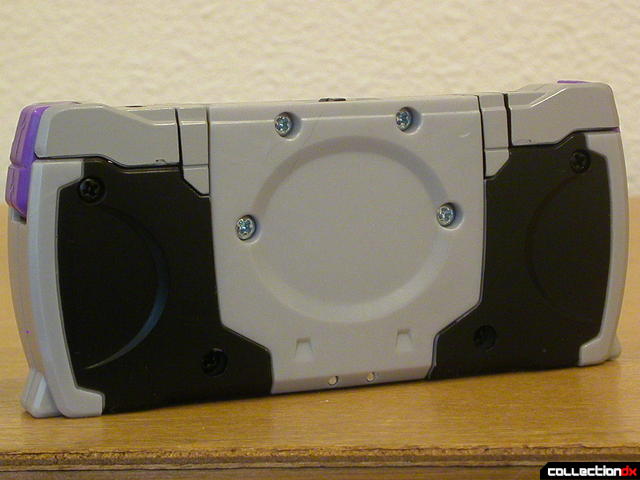