After much debate, I’ve decided to quit Gunpla!

JoshB will have to hold the first ever and only “CollectionDX Super Gunpla and Cow Master Builder Championship Tournament Battle Royale with Cheese” to find my successor.

From now on, I’m building sports cars. They’re affordable, they’re local, and I heard from my father’s brother’s cousin’s nephew’s former roommate that these are way more popular than those darn Gundams. Seriously, they're like beany babies with wheels!

At the same time, my sister's boss discovered I build models when I'm not raising bulls, and he's asked me to work on some cars for him. Such is the case of my first car in almost two decades, I’m building a Porsche 911 Turbo by Revell.

This 1:24 scale kit looks much smaller than I’m used to. I wonder how difficult it will be. 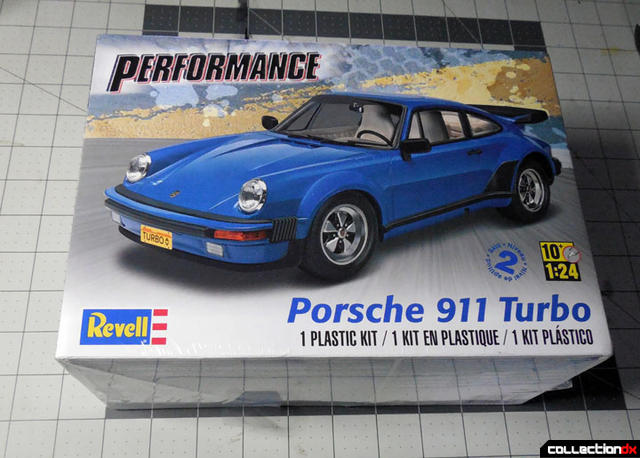 I mean for a Skill Level 2 it doesn’t sound so bad.

Let’s open this box and see what’s there. 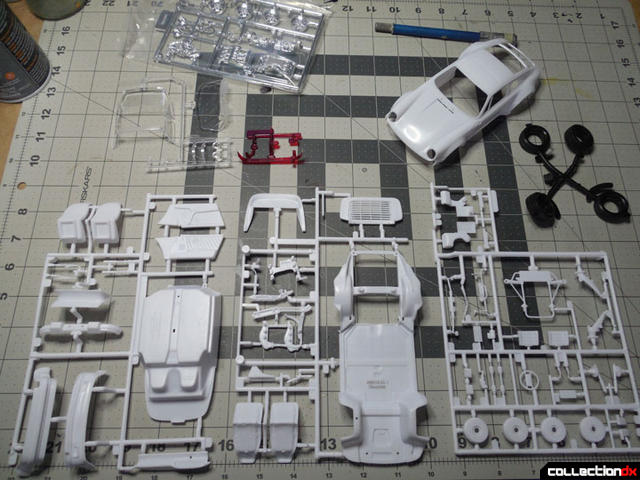 So all the parts are molded in white plastic and I have to paint everything. Well, at least there’s no having to use white paint on dark colors with this. Suck that Red Frame. 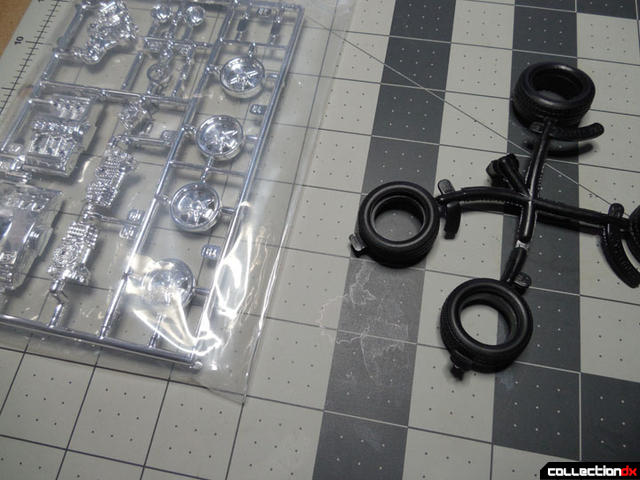 I see there’s no polycaps, but the tires are real rubber. That’s pretty cool I guess. 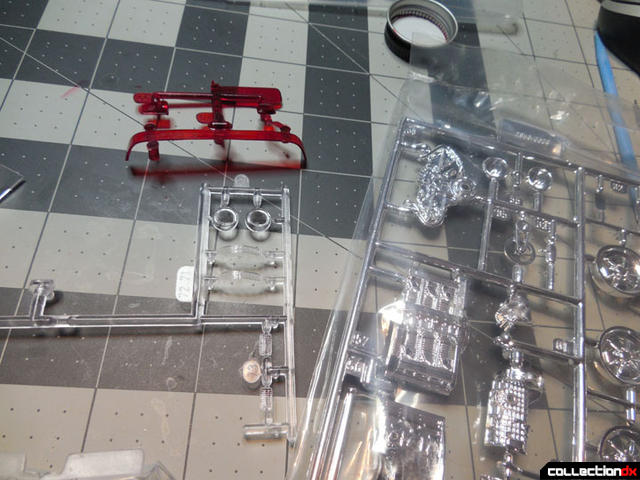 Clear parts AND chrome? Wow. You never see those in a Gundam model at the same time.

At least it doesn’t have decals. 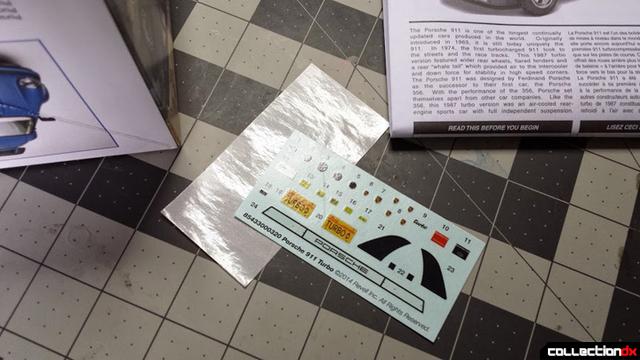 Aw, crap there they are… and they’re water slide types too.

There aren’t any pins for holding parts together and they won’t snap either. 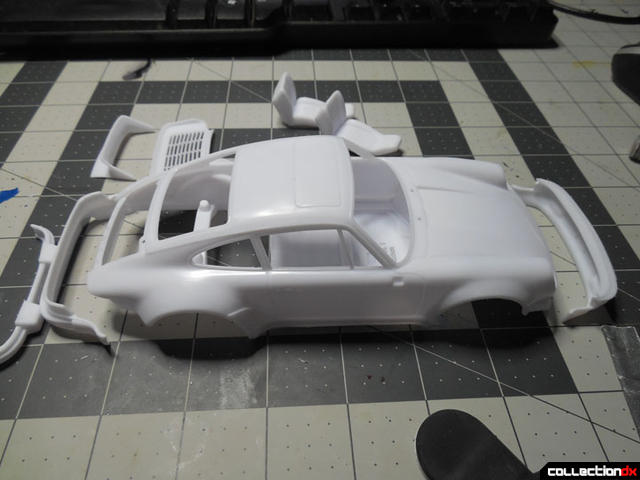 Oh wait that’s right, I need to use glue. 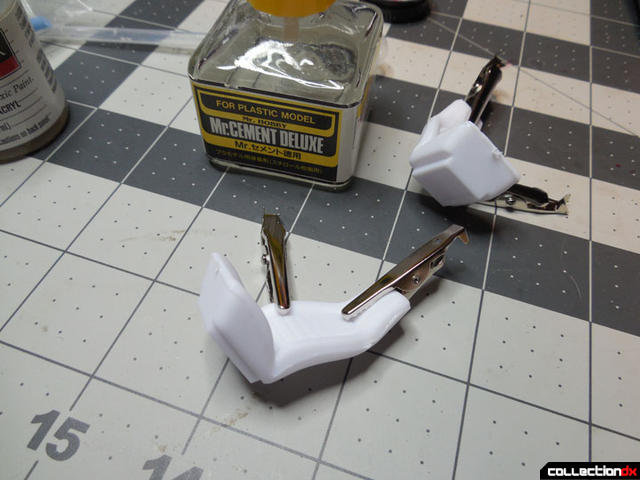 Hopefully I haven’t used too much…. why does my head feel fuzzy? 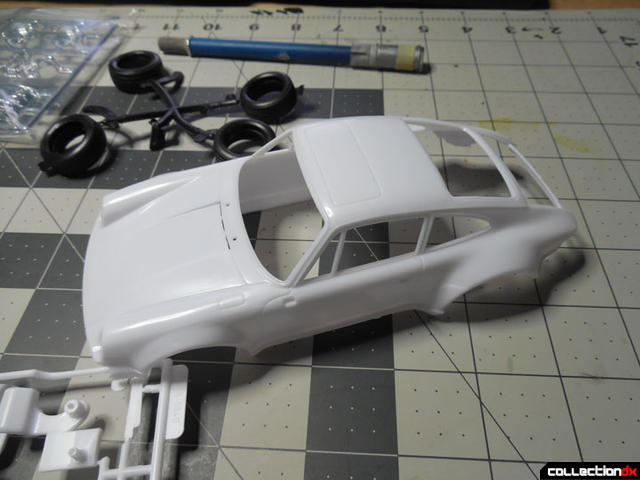 The nice thing is the body of the car isn’t attached to a runner but there’s a lot of flash to remove, so all I have to do is sand… 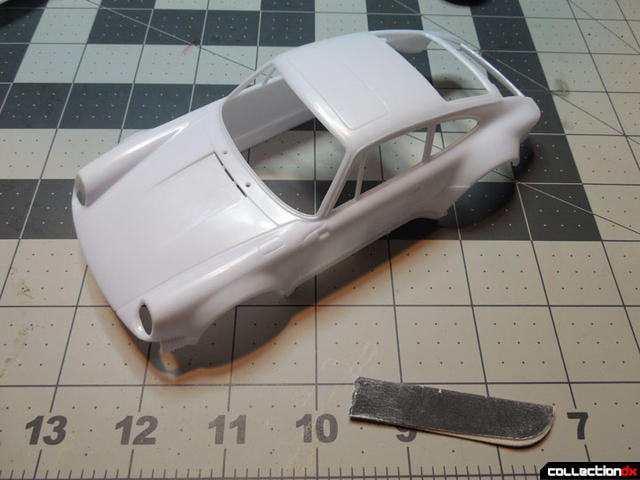 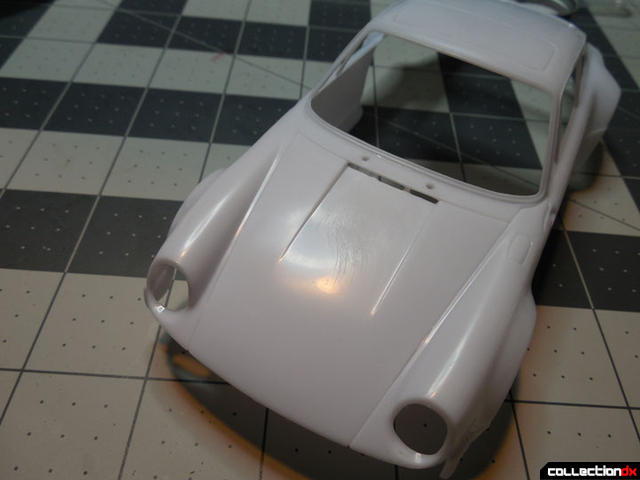 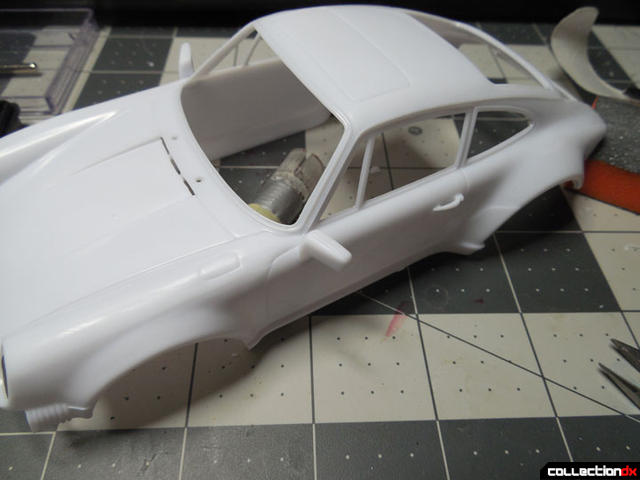 While I was at it, I went ahead and glued those things on too.

Now this is pretty cool.

The kit’s based on a 1987 model Turbo and because it was released in 2014, it looks like they stamped its production date on the undercarriage. 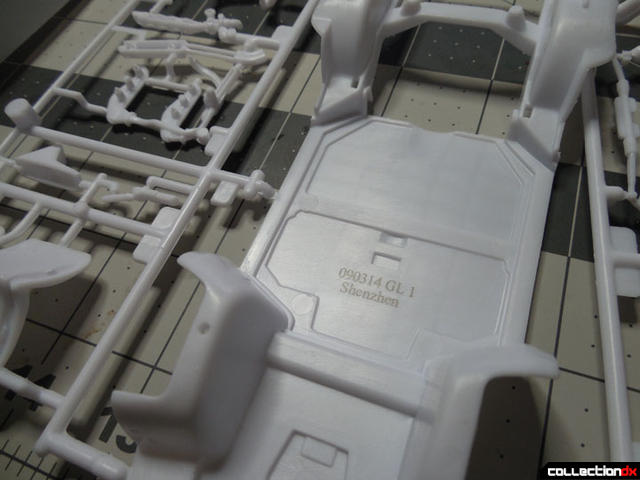 Thanks Shenzhen, I’ll never forget you. Whoever you are. 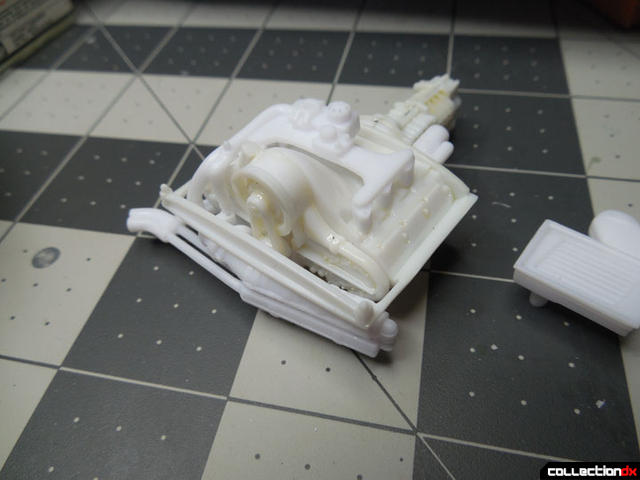 Whatever this assembly is, the chrome is chipping because of the sprue nub. 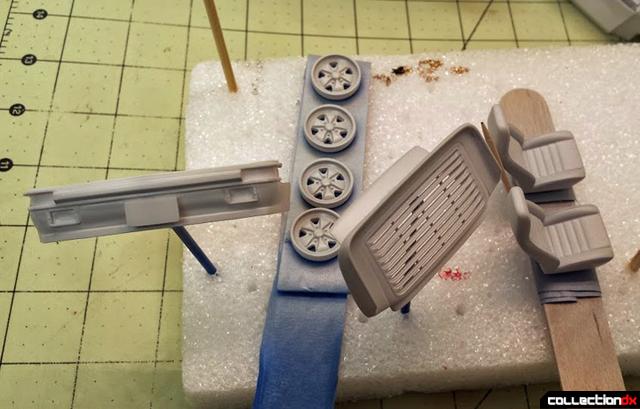 Even the wheels get de-blinged.

How did I do this you ask? Bleach? Coca-Cola (trademark, copyright, I’m not getting paid to say that)? Degreaser? Did I rub some cow blood on it?

Nope! Forget that noise; I put the parts in my ultra-sonic cleaner: the Super Hadomatic Washer 2000 from Harbor Hate Tools that I got a free set of screwdrivers with just for looking at it. 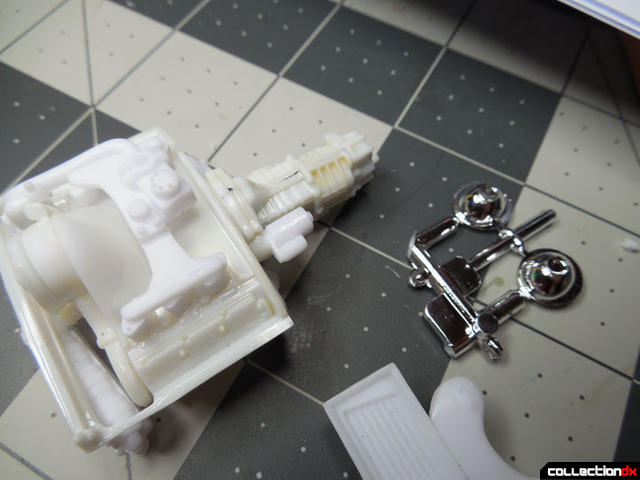 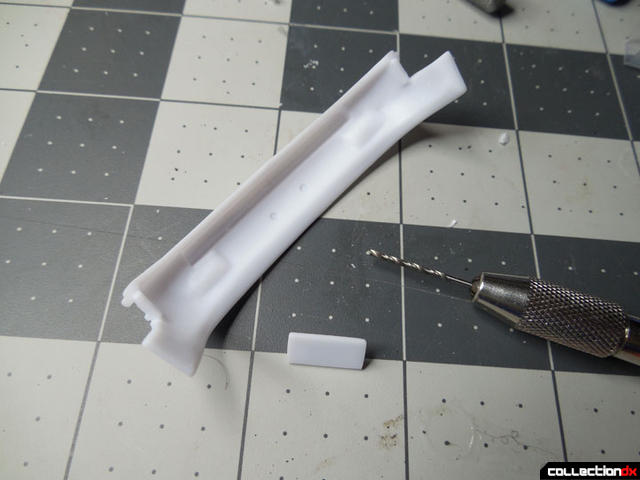 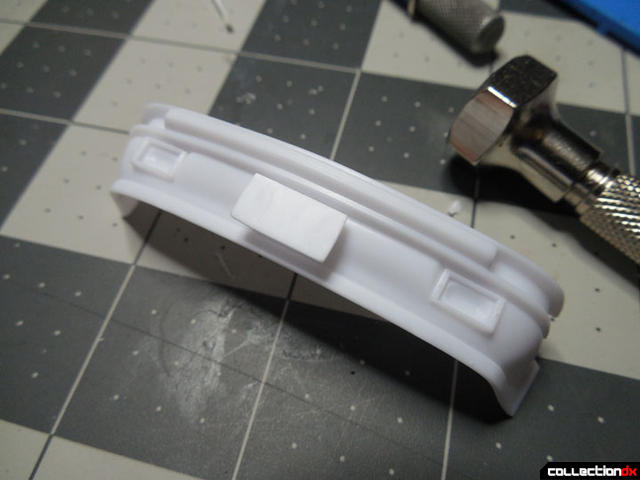 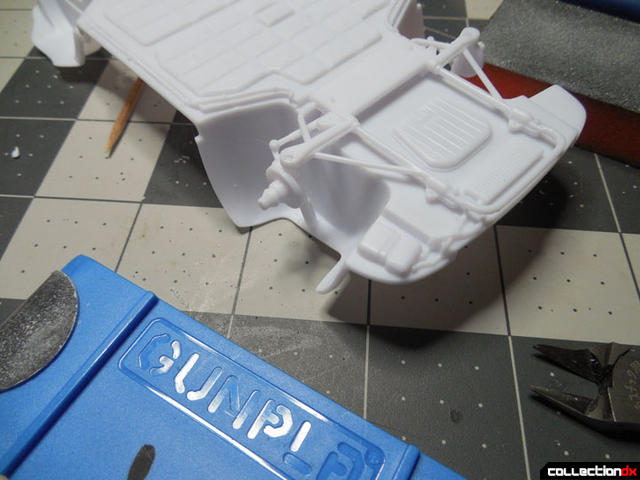 So now I’ve followed the instructions on gluing the small bits together, I’m at the point where I can start snapping this whole thing together! 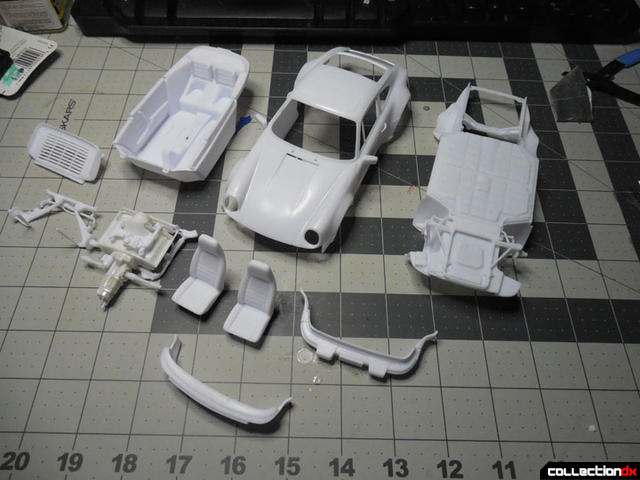 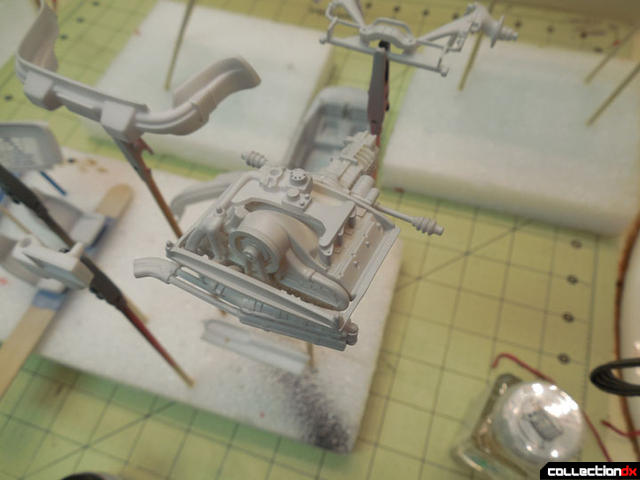 Where do these go? 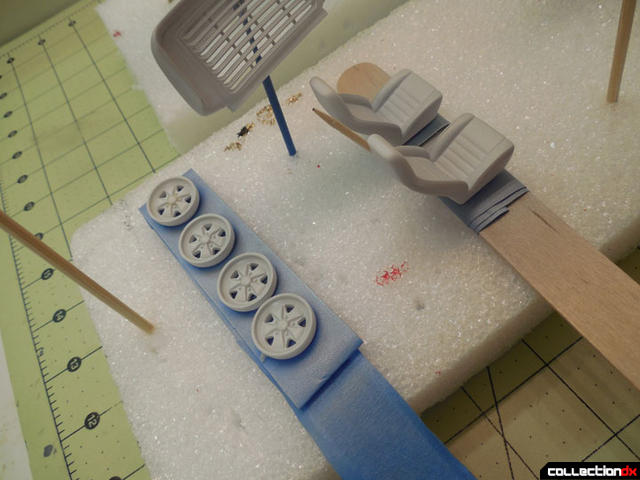 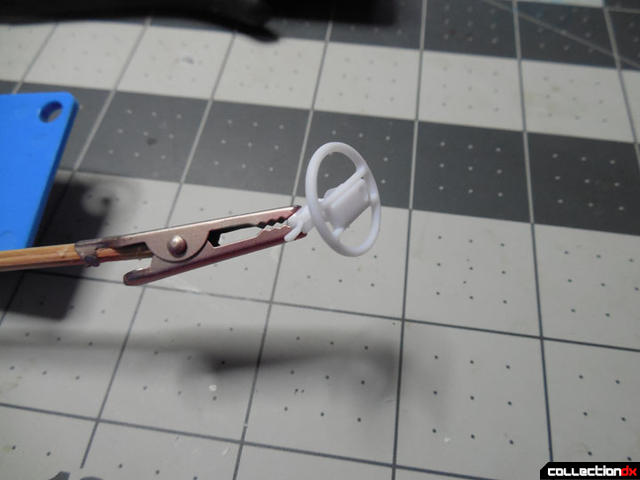 …and I have no bloody idea what the #@$% this is supposed to be. 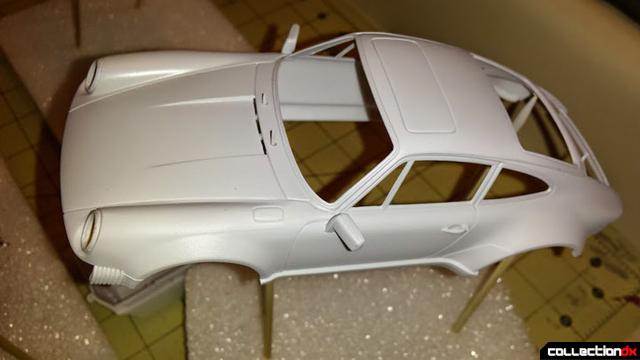 Okay forget that for a minute. I need to start painting this. Now that I've primed everything... 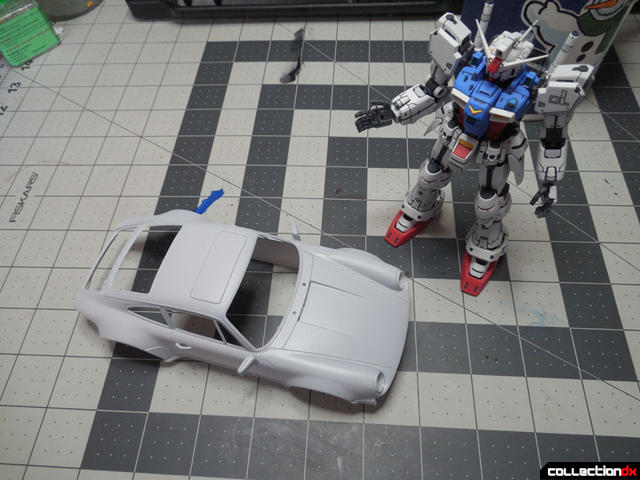 I guess I used too much on my final Gundam, the Real Grade GP01.

Yeah!
This way I can even panel line it too! 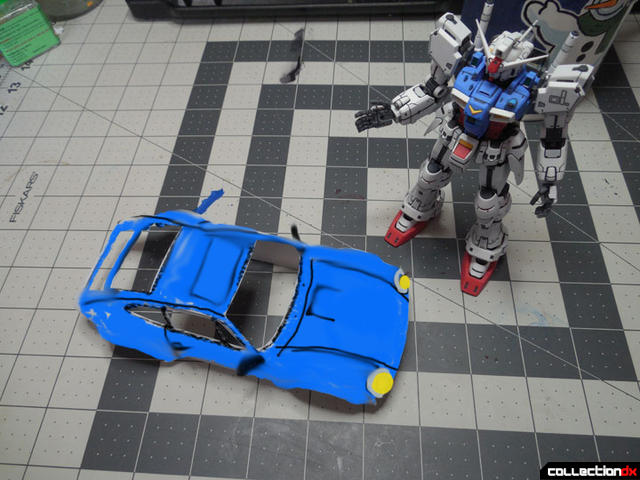 That was great. Maybe next year I’ll build another G-Saviour!

3 comments posted
Quit while you're ahead!

Great review, Rob! When I first glanced at your "paint job," I thought you had gone for one of those cell-shaded looks that are all the rage these days.

It's probably a good idea that you quit when you did. At the rate you were going, this can might have ended up with its engine stuck in the wrong end and some sort of crazy whale-tail spoiler tacked on over it. Who would want a car like that?

Thanks. I was going for cartoon screen accurate.

As far as the car is concerned, don't be silly. I deliberately carved out the front, put the engine in the backseat (since this is a Porsche, and nobody who drives one needs passengers in the backseat), so I could make room for the Tronium Engine and Vernier Nozzles.

I also replaced the headlamps with a set of HD Builders Parts Gatling Gun barrels.

and I put a shark's fin at the end, not a whale tail.

Just spamming my own review's comment section with a short retort on my April Fool's Joke.

I hope everbody got a laugh out of this, I was only having some off handed fun with this project.

I am really putting an effort into this build as I have my Gunpla and once I am done with this car, I will upload images to the gallery and maybe update this review as I come to it.

Happy April and Thanks for reading!