Popbot is a very silly ‘comic’/artbook series that was one of Wood’s first major successes.  It is a bizarre thing, fully of incredible artwork, the hints of a really interesting story, and loads of style.  It is also squiddarn filthy, so children, stay away.  Popbot is a robot, and bodyguard/roadie to Kitty, an intergalactically-acclaimed rock singer that runs into trouble and also happens to be an actual cat.    Despite the name, Kitty is really the main character of the story, but Pop is the hub around which all sorts of things happen. 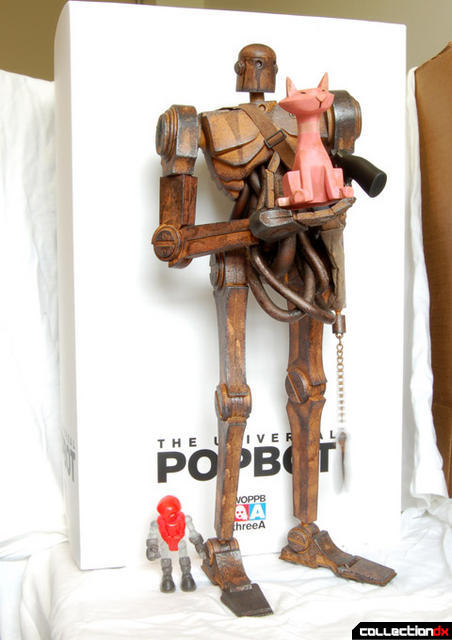 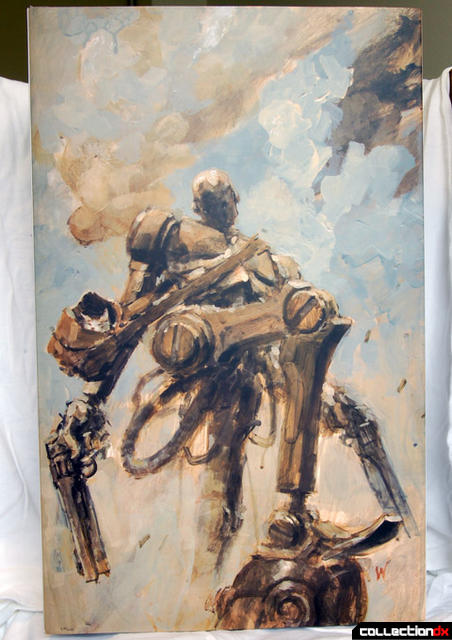 The eponymous Popbot 1/6 figure comes in a slipcover box adorned with a new Popbot painting by Wood specifically for this release.  The whole package is sharp and gorgeous.  Inside rests a vacuum tray holding Pop, Kitty, a satchel, and a big gun.  Wraith Pheyden gives you an appreciation for how massive this package is. 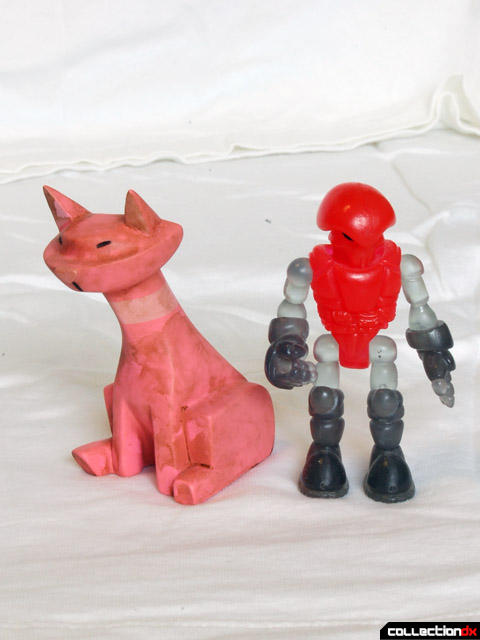 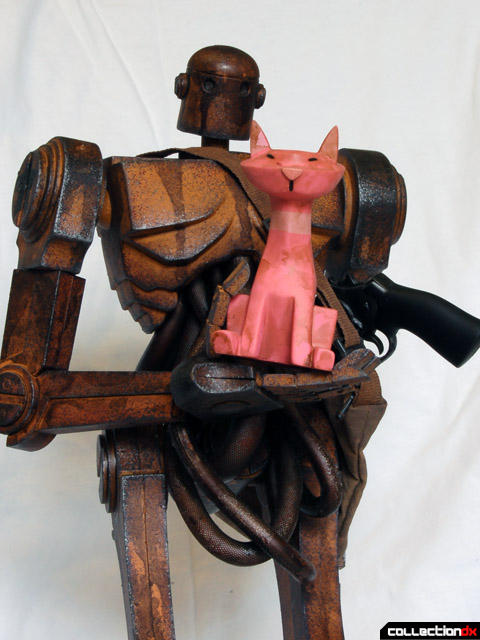 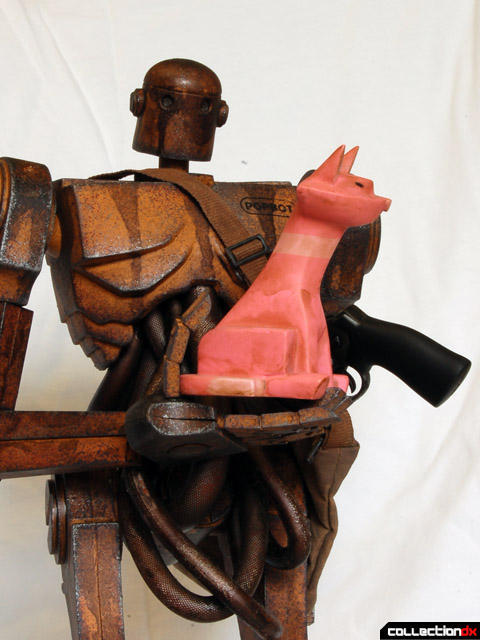 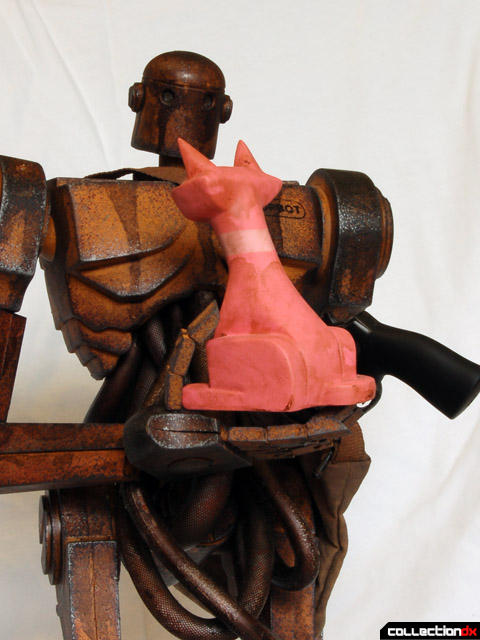 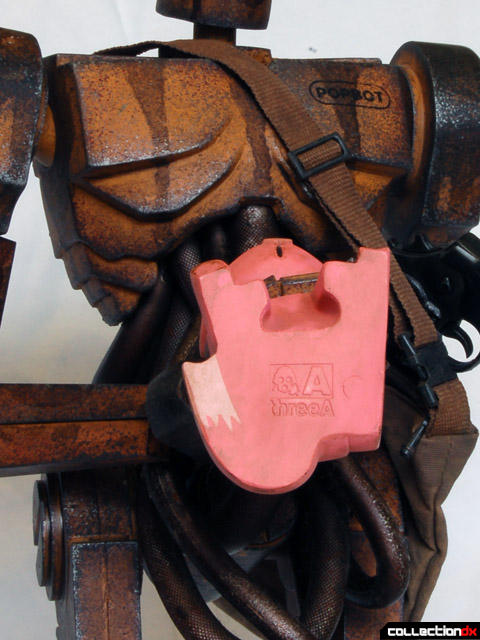 We’ll start by discussing Kitty, produced here as a ~3” vinyl figure.  There are a ton of paint variations, provided blind-box style in the different Popbot and Badbot releases, as well as in a standalone Kitty multi-pack.  The molding on Kitty is sharp, and the angular style distinct, but it’s at odds with the sculpting on Pop and most of the rest of the line.  I guess the Kitty sculpt matches the angular style of other 3A figures’ heads and hands, but it seems a little odd compared to how Kitty is depicted as a pretty normal looking cat in the artwork.  Regardless, Kitty is not why we’re here. 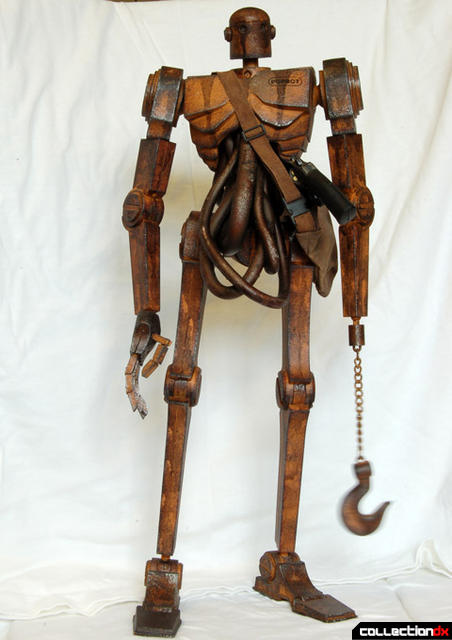 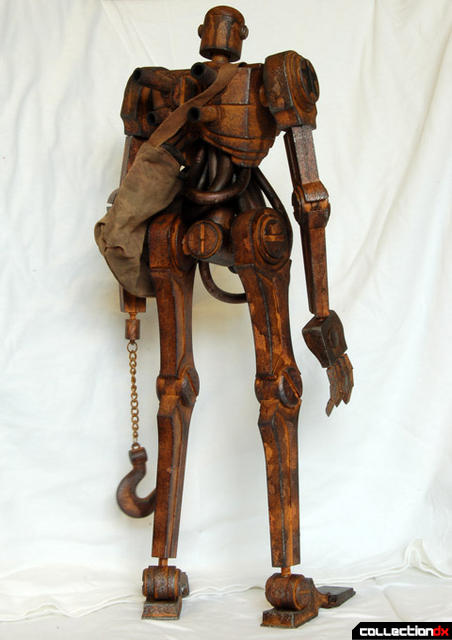 Pop stands around fourteen inches tall in 1/6 scale.  His size and details are a bit inconsistent between volumes of the comic, but he’s always depicted as bigger than an average dude. 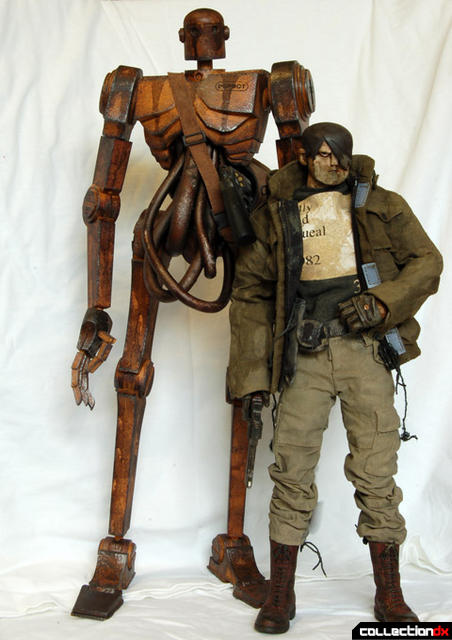 Here’s Pop next to an example average dude for comparison, Bleak Mission from the Adventure Kartel line. 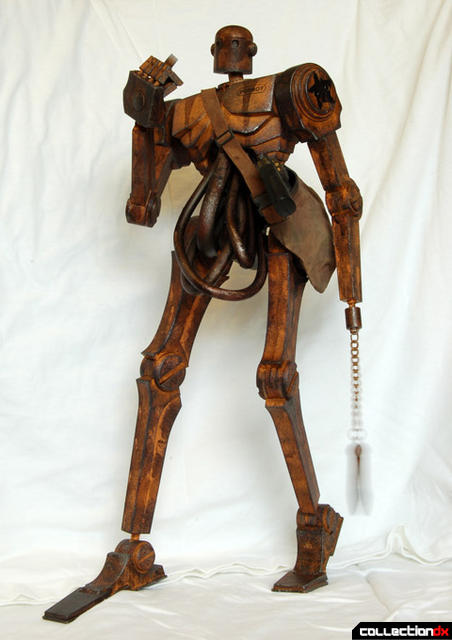 Popbot is fully articulated with ball and pin joints at the neck, torso, shoulders, biceps, elbows, wrists, individual fingers, hips, knees, ankles at two points, and toes.  The side to side range on the shoulders is a bit cramped by the sculpting and the socket joint, but in general Popbot is incredible articulated.  The meathook is affixed by a real metal chain.  There is another version of this figure with two hands, as well as his evil twin Badbot, who has two hands and two pistols, and another headsculpt with only one eye. 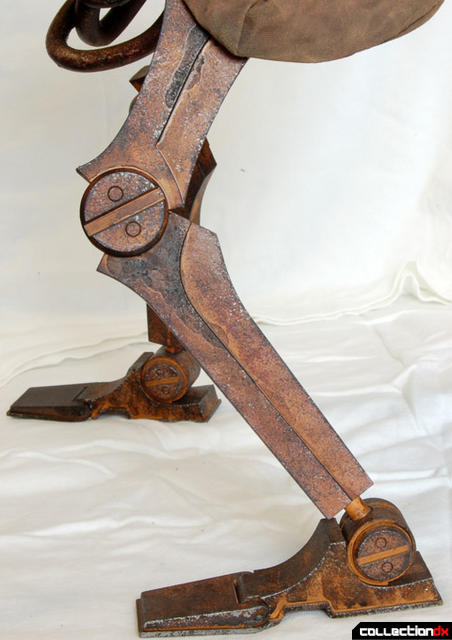 I am especially enamored with the ankles, which feature both a swivel and ball joint, so the feet always lie flat on the ground. 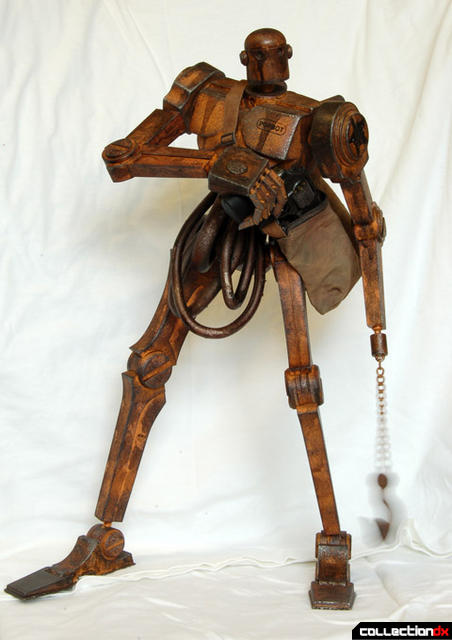 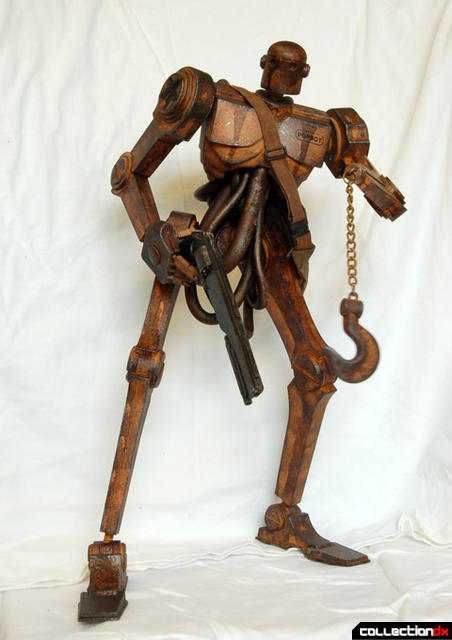 The intestine-like hoses around the midsection are soft PVC and do not interfere with torso movement.  On my Pop, the paint on the pipes was a bit sticky out of the box, but dried after a few days not trapped in the plastic tray.  I think there’s a reaction that happens with the paint and off-gassing from the try or vinyl of the figure, since I have gotten a lot of 3A figs with sticky paint on soft parts that dried once out of the box.  Not a deal breaker, but annoying. 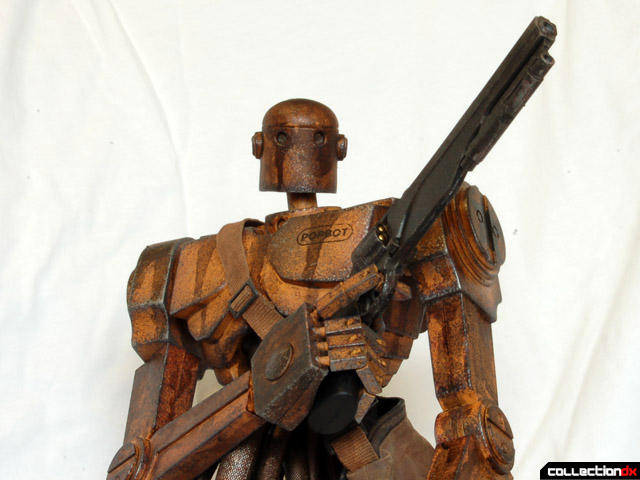 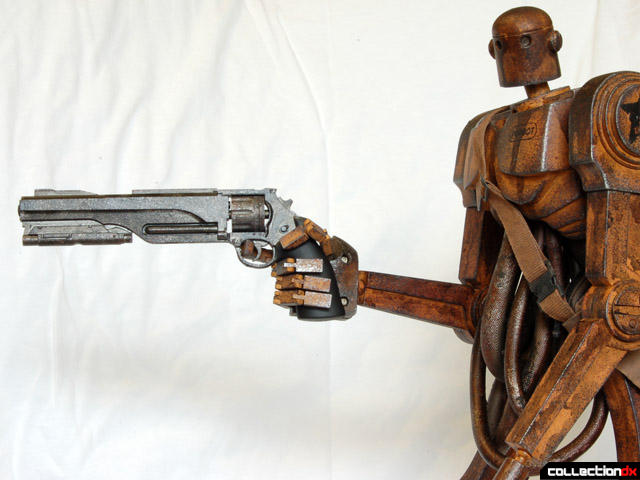 Pop’s accessories are his satchel, in which he can carry Kitty and his huge, awesome root-sized magnum.  Pop’s piece packs in the detail, with gorgeous paint and a perfectly rotating chamber.  The satchel also features a working zipper and adjustable strap.  It’s a little formless and squishy, but something more messenger-bag like wouldn’t have been able to hold Kitty as well. 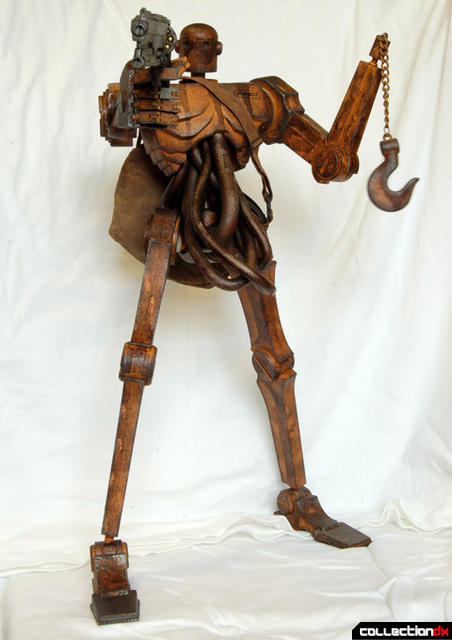 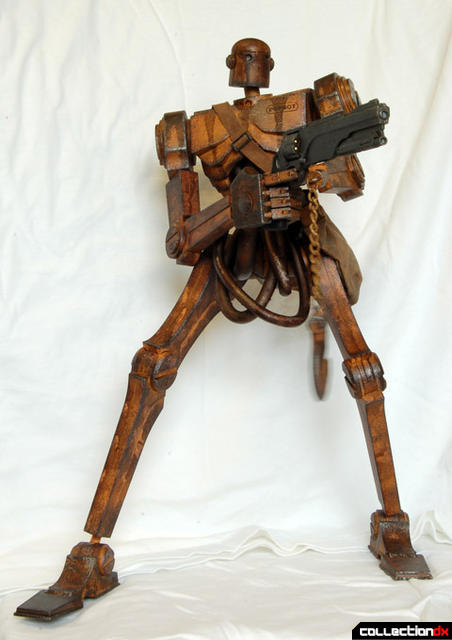 Pop’s imposing stature and huge hand-cannon make for a great display, and the durability of the vinyl and plastic parts make for a fun figure that you can actually handle.  The simple design and fantastic articulation make me want to repose mine every day.  These were around $150 when they debuted, but I think 3A must have made a ton so that people would be able to get such a popular character in the future.  I got mine on sale from BBTS for about a hundred bucks and love it.  It has the incredible fit, finish, and paint of all the best 3A releases, but is a simple enough design that non-fans could pick one up and enjoy it just as a fun, well made robot toy.

Awesome and gorgeous. This is prolly one of the designs I'm more fond of. The hook hand sells it for me.

don't really have anything else to say. i'd seen some photos of this toy before, but didn't really have a good idea of how big it was or how nice the paint finish is until now.

Can't say I've ever heard of the robot or the series it comes from, but his steam-punk design seems to hit all the right buttons for me. I've never seen that kind of weathering on completed toys either. That's an amazing piece of work you have there.